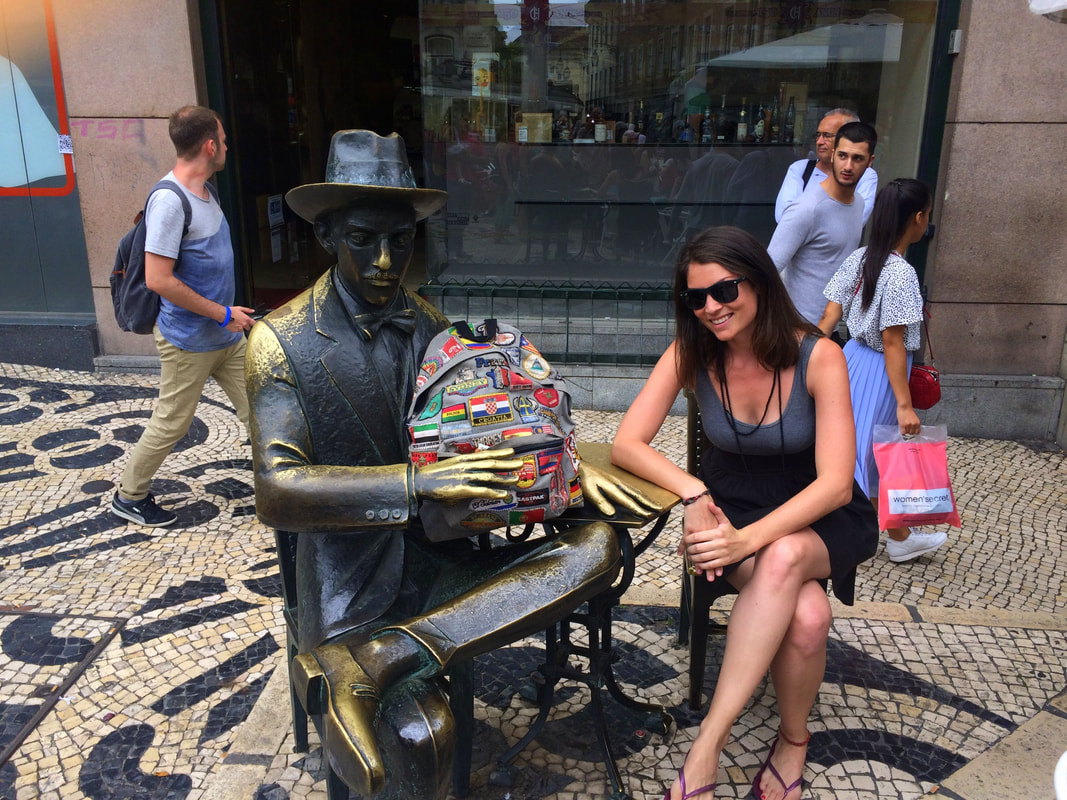 “I wasn’t meant for reality, but life came and found me.”

If there was one city I was longing to visit after being outside of Europe for almost three years, it’s the city of one of the most ingenious writers our recent history has brought forth. I remember the first time I read a book of Fernando Pessoa. It took me forever to finish, as I kept on re-reading every single paragraph in an attempt to grasp every grain of its depth, every tatter of its imagery. I didn’t make many friends, as I kept on bugging each person that randomly entered a three-meter-radius around me with spontaneous readings and basically found an excuse in every conversation to quote one of his mind trips. A Pessoa-Jehova’s-Witness if you will. And now I was walking the streets where he walked, seeing the sights he had seen and breathing the air he once breathed. 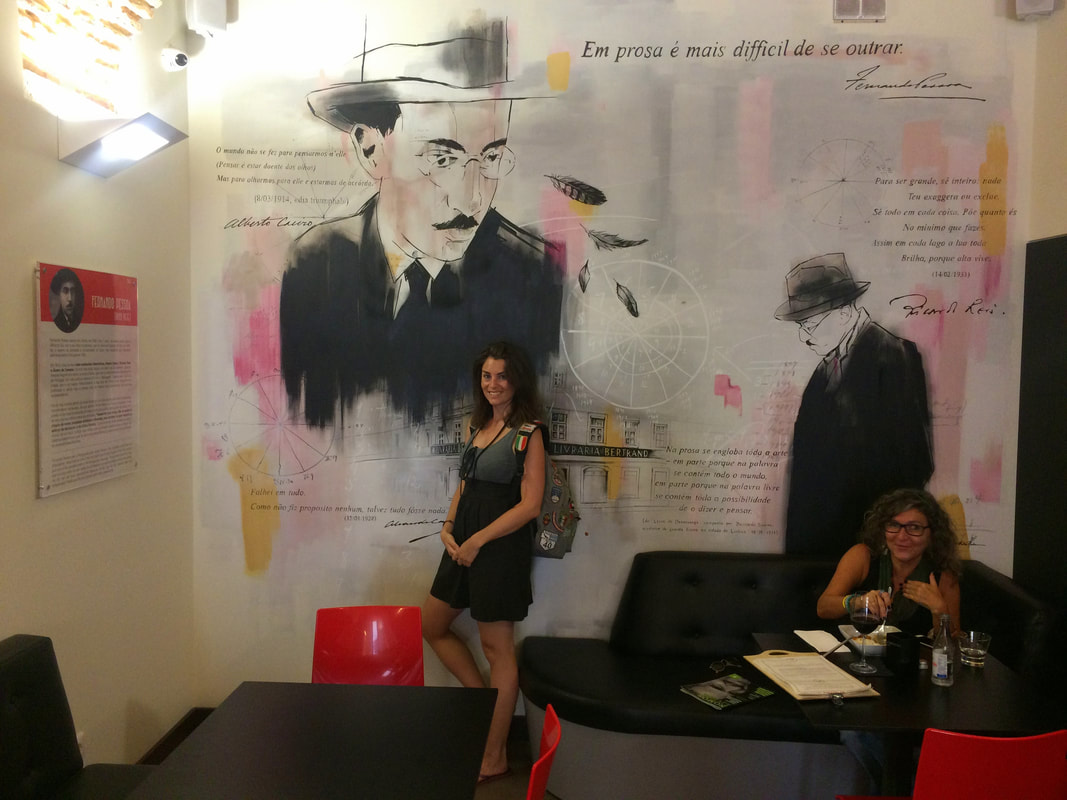 ​Therefore, after I took a flight from Florianopolis to São Paulo, traveled from São Paulo to Campinas and skipped a night to fly ten hours from Brazil to Portugal, there was no time to recover from this thing called “a jetlag”. I was going to follow the footsteps of my literary hero, or the train tracks, to be more precise. 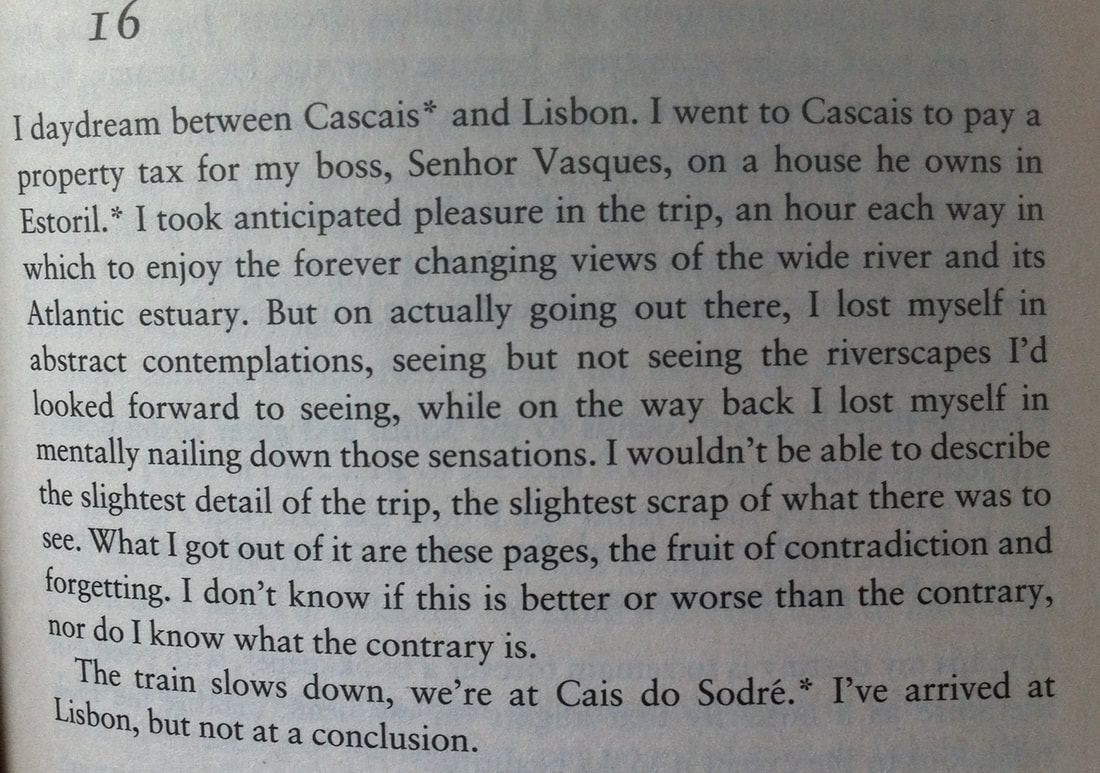 I was following the coast stretching from Lisbon leading to Cascais. I glanced next to me and let the overwhelming feeling of euphoria stream over my consciousness, caused by the presence of someone I felt connected with from the moment we met in a desert in Chile. 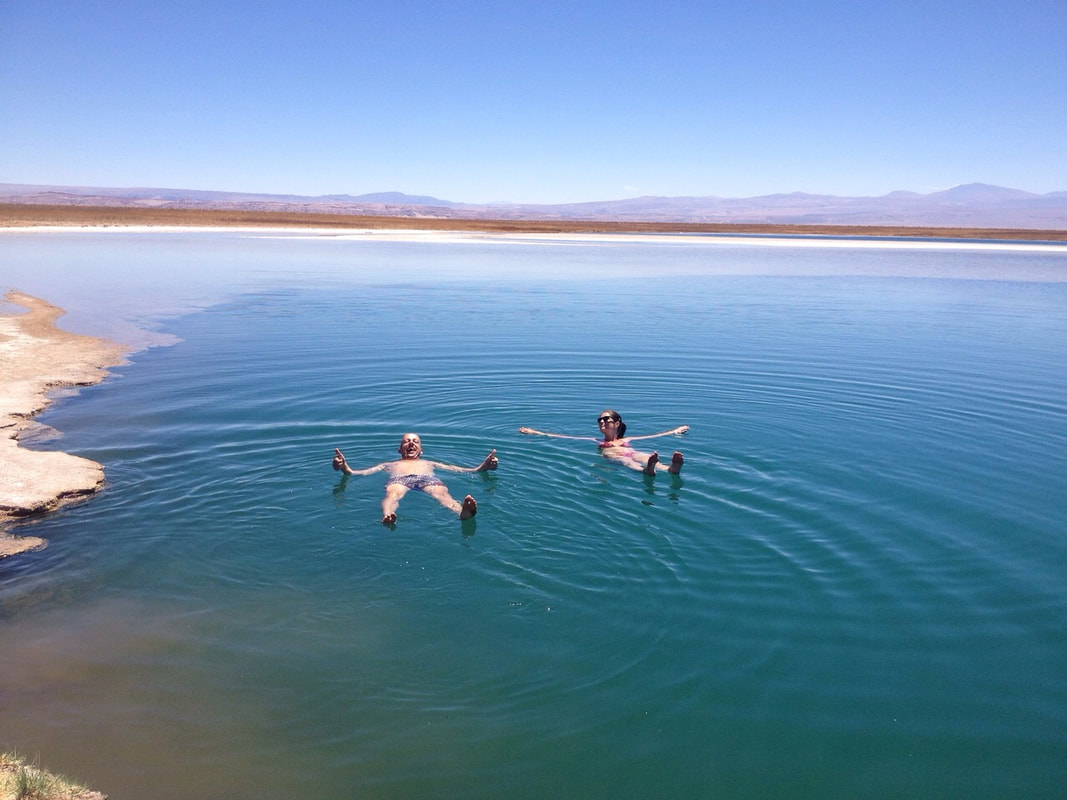 ​When I saw Wouter for the first time I initially avoided him… This guy with his loud  jolly laugh, traveling around with half of his backpack full of seeds and herbs to fuel his untamable search of health and spirituality, that seemed all just a bit too floaty and weird to me. But then I realized that was exactly what I liked about him, his comfort with not fitting in and not giving two flying fucks about what others might think about his peculiarities. I meet so many people along the way, they appear and disappear again because that’s just my life, but this one stuck. He appeared in my dreams, man, he even showed up in my hallucinations during the ayahuasca ceremonies he recommended me to take! It’s that kind of affection you feel for a long-lost brother, your kindred spirit. The puzzle was complete again. 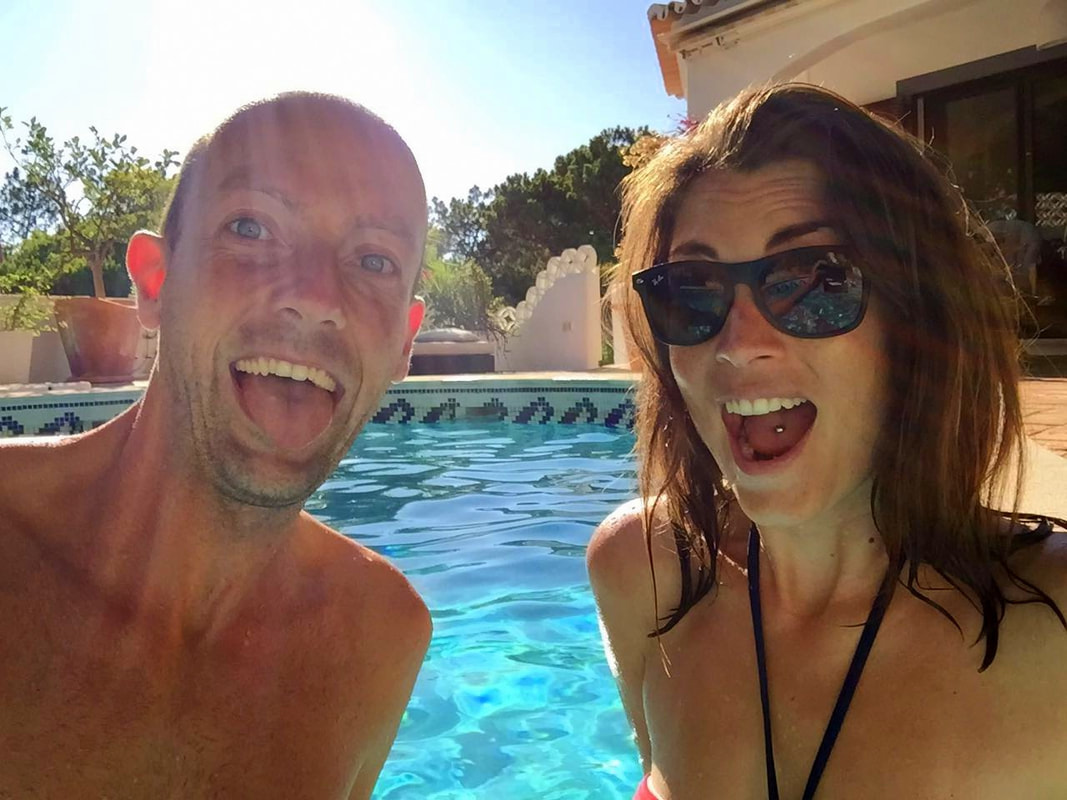 We strolled passed the dazzling architecture of a city where history is preserved and captured like its most precious treasure. From the iconic harbor I looked out over the sea where fancy yachts and weathered fishing boats rocked gently on the waves, sharing their waters with sunbathers and watersporters of an endless variety of nationalities.

This city has it all, and people know it, acting out their attachment during their interaction with reality. They seem to laugh a tiny tad louder, kissing their lovers a bit more passionately, wandering through an environment where colors and scents seem to be a dash more intense.
​Also that vegan plate me and my organic-gluten-free-only-pal devoured on the rooftop of a whitewashed house overlooking the Atlantic tasted yummier than anything else I ate that 24-hour period. 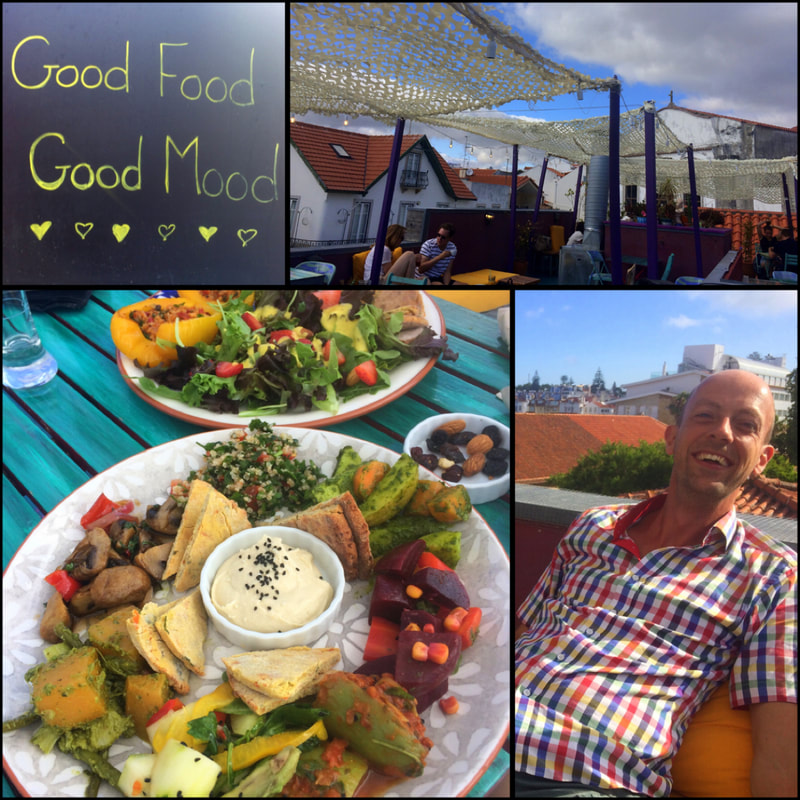 ​Also the center of Portugal’s alluring capital didn’t fail to impress. Without any prior planning we simply dove into the historic labyrinth in between the city walls of Lisbon to unpack the surprises this place would grant us. We followed the handicraft market lingering along the avenues marking the city’s entrance until we stumbled upon one of those antique trams you always find back on Lisbon’s postcards. Tourists just adore these cute little expressions of public transport, refusing to leave town without a treasured little snapshot. 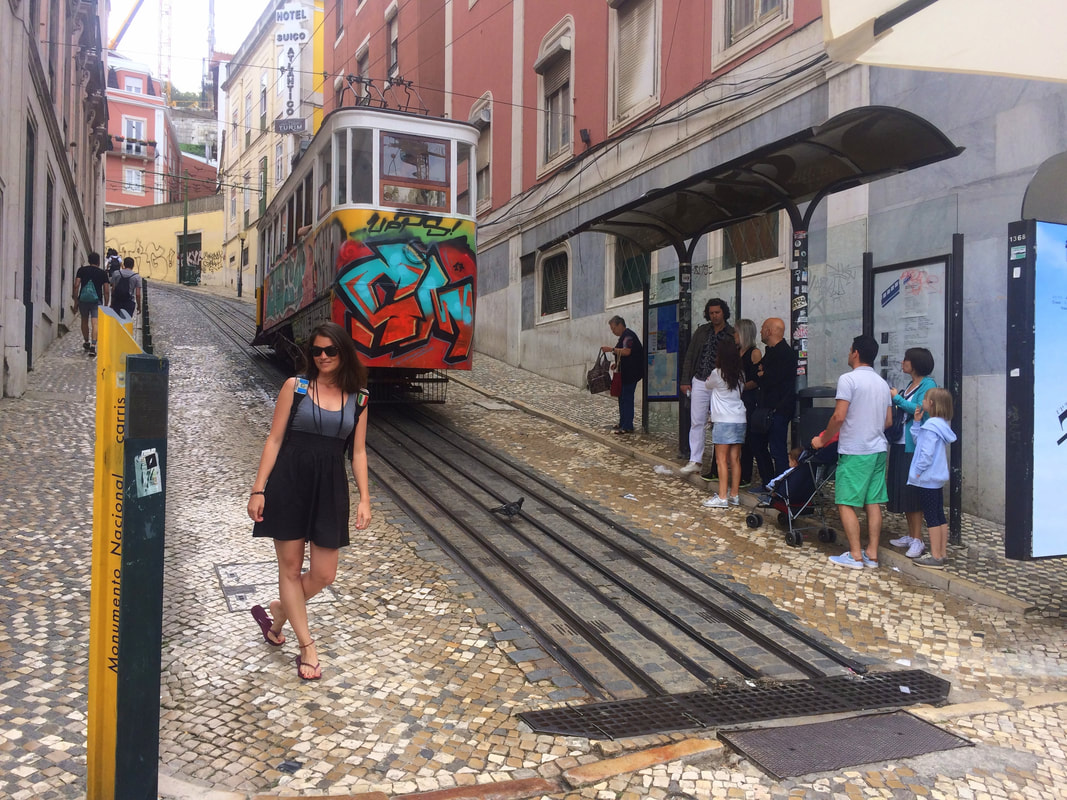 ​While disconnecting from the crowds I heard the screams and cries behind me, stating in a broad spectrum of languages that this is the only city where this sight can be admired. As I studied half a year in Italy’s Milan during an Erasmus university exchange I can confirm this is incorrect, but here they do have some elevator-versions climbing uphill, which is indeed kinda cool. They entirely lost their function as an efficient mode of transport and are nowadays only here to stay to entertain the tourist masses for an overpriced rate, but the idea is rather captivating.
​We allowed ourselves to get lost in between the enjoyable chaos of bohemian street musicians, market vendors and swarming daytrippers who move around in between the impressive architecture of colorful wall tiles in mosaic patterns that give this place on Earth its unique character. We stumbled upon the praised Museu do Chiado and decided to top up our daily dose of culture once this opportunity randomly presented itself. And with my soulmate on my side museum-hopping for sure gets an extra flavor… or is it normal to take your boob out of your bra in attempt to imitate a statue? 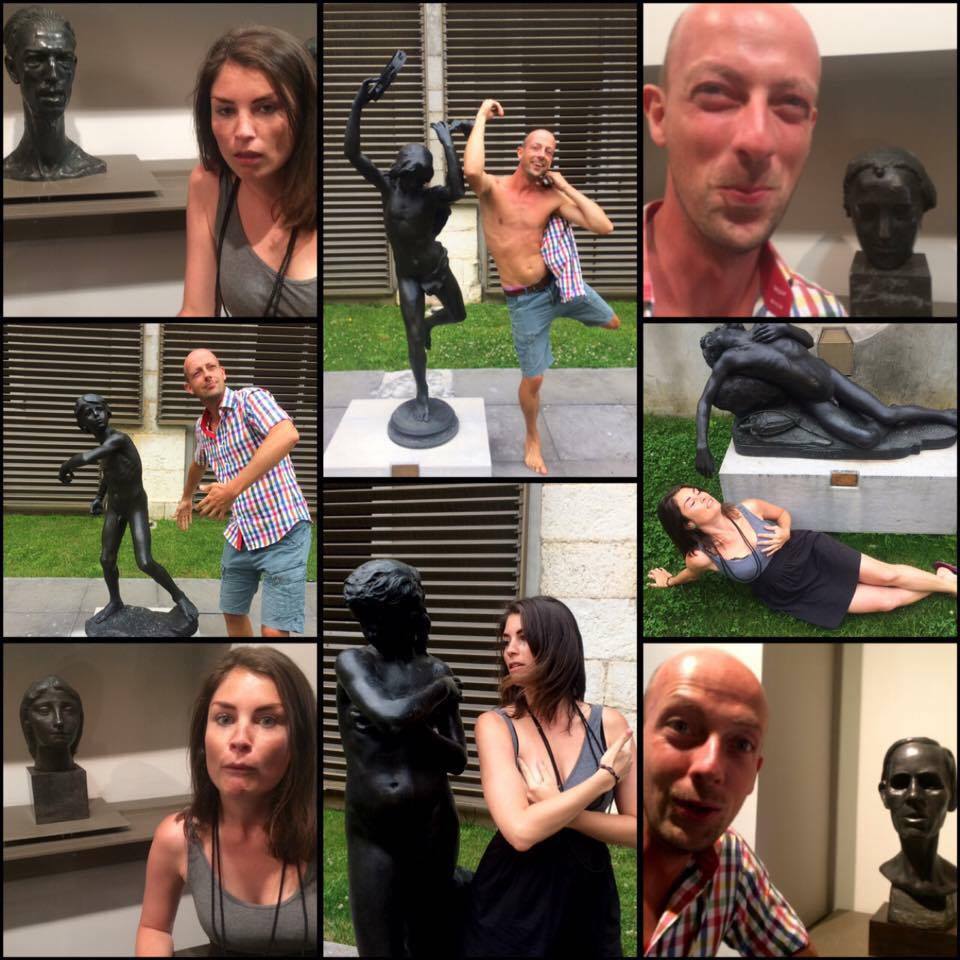 I've never got kicked out of a museum before, but I’m convinced there’s a first for everything.
​
* Yes, also here you pay half price with your fake or expired student card!

Ok, I just said we completely winged it and didn’t plan anything, but to be frank with you there was one highlight I simply had to check off the Budget Bucket List.

I mean, not every day one is presented with the opportunity to freely plunge on the World’s Sexiest Toilet. Yes, let that sink in for a bit. 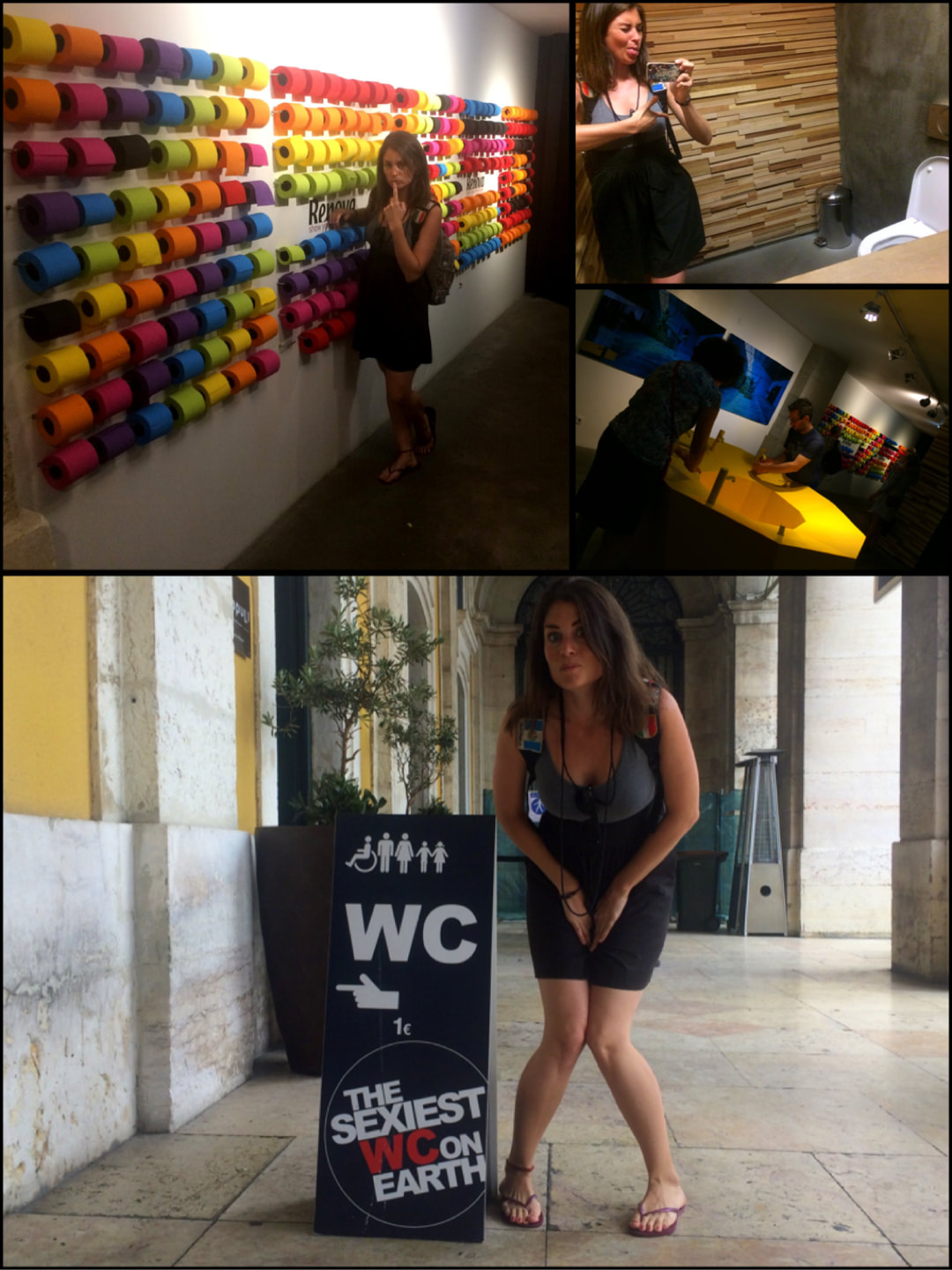 I know you’re jealous, but know I thought of you when whipping my butt with bordeaux red toilet paper… one day this will be you, never let go of the dream my dear explorers!

After some serious souvenir shopping we somehow ended up in some district by no means less trendy than Eastern Berlin or any other industrial-area-culturally-gentrified-as-the-new-and-happening-hipster-hole-in-town. Ha, so Lisbon has that too? We fought ourselves through some overly trendy gluten-free market hall full of vintage velvet capris and asymmetrical lesbian hairdo’s and decided this was all we could handle for a day.
BUT luckily I can’t read maps. Which meant we didn’t go back to our AirBnB in Oeiras at all, but ended up in Cascais again. I remember Wouter saying yesterday “I’ll for sure come back here one day”… a desire fulfilled quicker than he probably bargained for. Anticipating is key here. This is life’s way of treating you on some unexpected portion of fun.
​
Because sitting on a hidden beach with a bottle of wine and a box of hummus is fun. 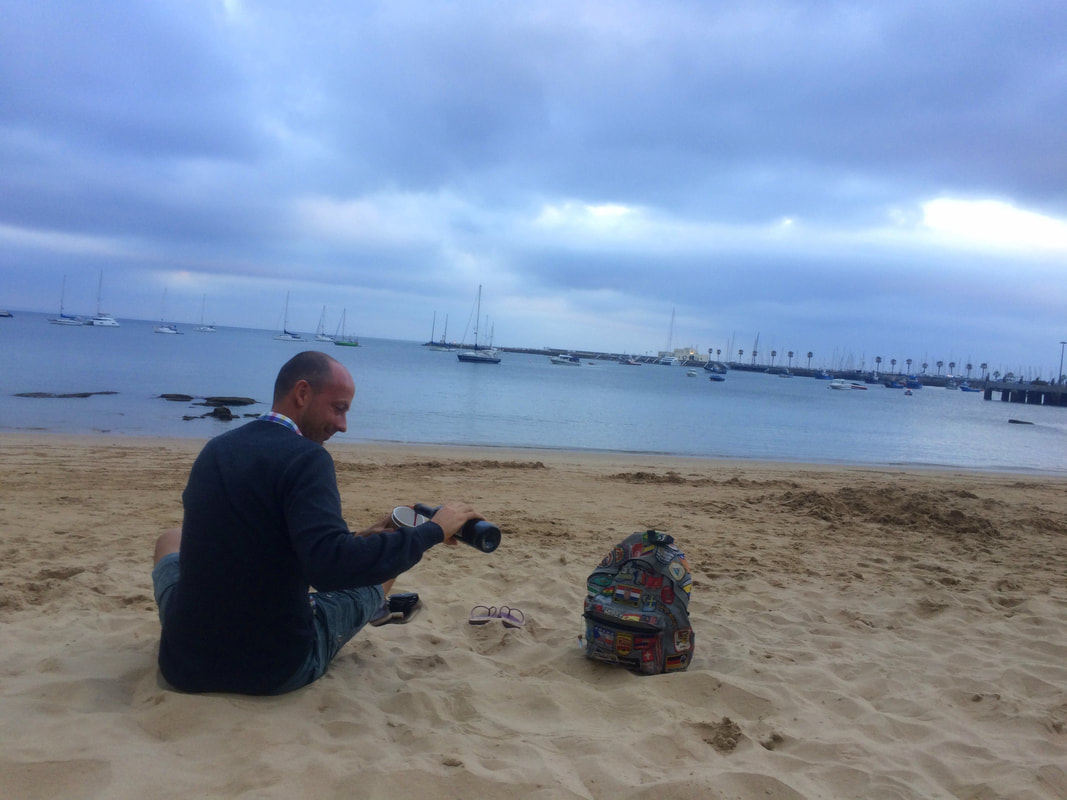 And it’s even more fun to subsequently drunkenly stumble into a Moroccan party, buy an Arabic garment on the spot and take over the dancefloor.

No idea how that happened. Yeah… we’re pretty nuts separately, but together we’re a disaster. 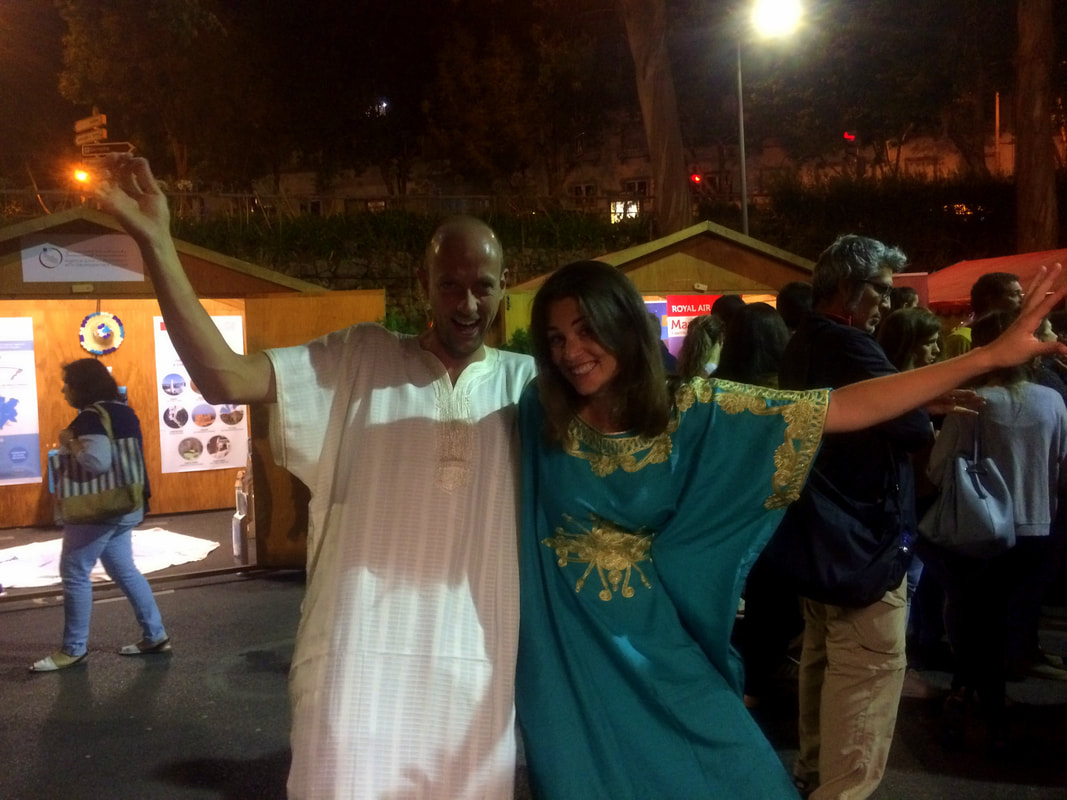 ​Obviously, after a night like that, the morning is unforgiving. But if you only have one day in Lisbon left you get up like a warrior, because you know it’ll be worth it. We decided to head down to Sintra, for the simple reason it was on the map and we never heard of it before. I think this is an excellent compass for decision-making, because look where that brought us. 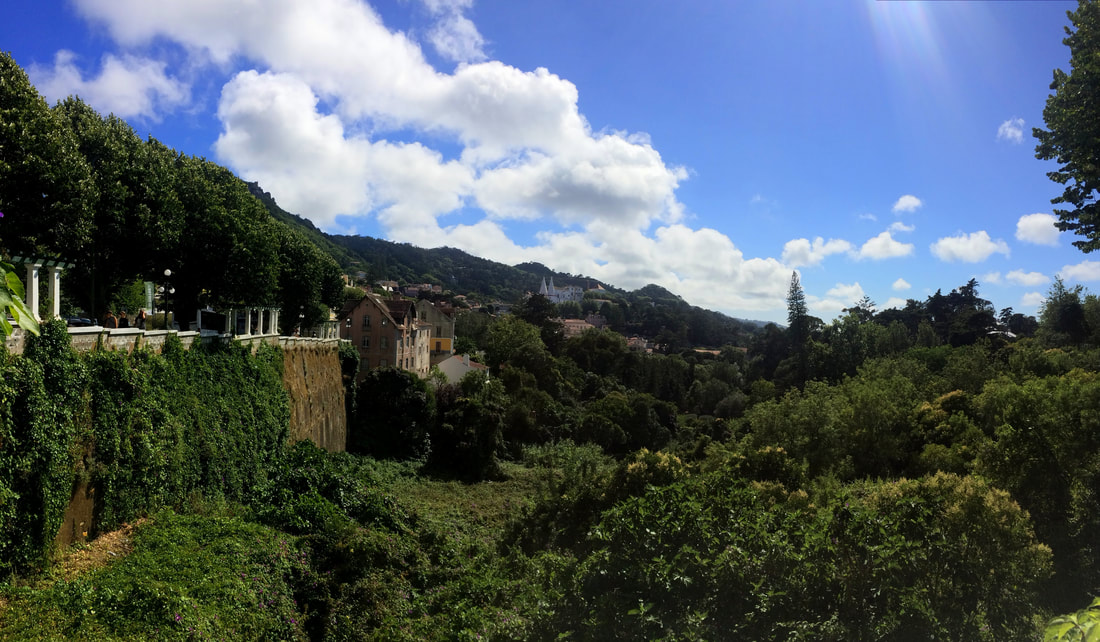 The simple tranquility of tiny villages sloping on the green hills of the countryside, marble alleys leading to artists creating their ware under the tickling sunrays and overgrown Moorish castles soaring above the landscape… This place is pure delight.
* Normally you pay €8 to get in… unless you’re the Budget Bucket List’er, then you just walk in ignoring the ticket office entirely.

​
I felt the warmth of Lisbon. Grateful to have taken some time, however limited, to admire its scenes from different perspectives and submerge in its delicious pallet of tastes, scents and colors.

The value of things is not the time they last, but the intensity with which they occur. [Pessoa]
In order to support the travelers’ community, I spend many hours per week to adequately document all information and advices for prospective visitors, accompanied by a (hopefully) entertaining insight into my personal observations and experiences. This service is and will remain free. However, if you voluntarily want to make a contribution and support my travels and thus the creation of new stories and information supply, here is the button you’re looking for:
Donate
Related:
- The sunny southern coast of Portugal: The Algarve
​- Explore Cyprus: Check out the Cyprus Nature, Cyprus Top-5 Cities and the North Cyprus Blogs!
- Citytripping in Denmark's capital: Copenhagen
- Where modern meets classic: Vilnius, Lithuania
- The slow charm attack of Serbia’s capital Belgrade​
​- Discover Romania's enjoyable cities: Bucharest, Brasov and Cluj Napoca
​- Europe's best skiing & hiking: Get your ass over to jaw-dropping Switzerland!
​- Visit Europe's mini-countries: Gibraltar, Liechtenstein, Luxemburg, Kosovo & Wales!
- Medieval Holland kept alive: Den Bosch & Haarlem
​- 3 reasons why you need to visit Nijmegen [The Netherlands]
​​​- Top-5 places to visit in South Limburg [The Netherlands]
- Where city and nature meet: Edinburgh, Scotland
- Spanish citytrips: Barcelona, Malaga & Sevilla
​- German gems: Aachen & Frankfurt am Main
​- 8 ways to save money in Vienna, Austria
​- Visiting the town of Hans Christian Andersen: Odense, Denmark
​- Discover more Belgium: Antwerp & the most kick-ass Flanders itinerary!
​- Couchsurfing in the house where Ruben Dario used to party: Jujuy, Argentina
- Where Le Petit Prince started... Peninsula Valdes, Argentina
​- Le Petit Prince in theatre in Queretaro, Mexico
​- Where Ruben Dario once lived: León, Nicaragua
​- Diving into Malaysia's history: Melaka
​​- The psychological start of a journey... in the city of Marrakech [Morocco]
​- Budget Bucket List hitchhike trip to... Kosovo!
​​- Discover the splendours of Turkey: Istanbul on a Budget & Reasons to visit Edirne