Download File
The way from Peru to Cuenca wasn’t an easy one (check the misery here) but I am very content to inform you that it was worth it. During the last busride (out of 5) I finally had the chance to admire the Ecuadorian landscape of rice fields, jungle and a ridiculous amount of bananas everywhere. It has a slight resemblance to South East Asia, without losing its own identity. From the oppressive humidity in Guayaquil I entered the cool mountain air and drove through the clouds circling around Cajas National Park. You can’t see shit, but the idea of driving through a cloud always feels kind of magical somehow. 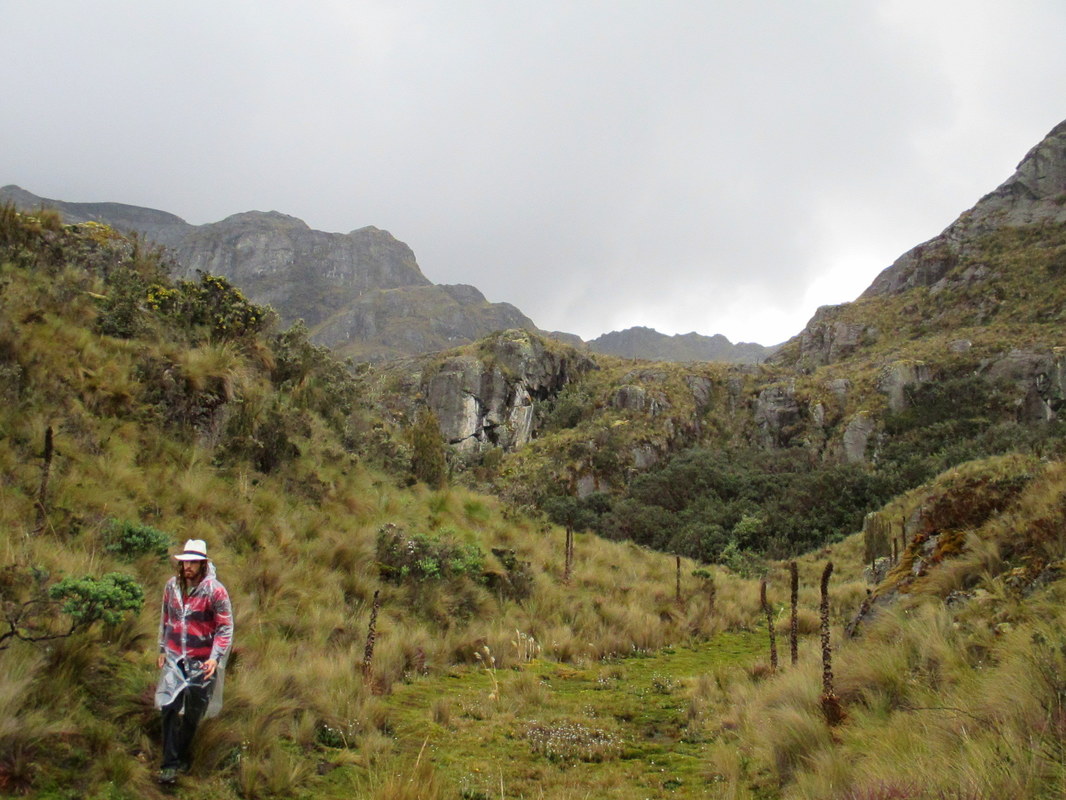 ​The late afternoon I passed a ton of churches and checked out Galeria de Alcaldia…
… and the evening I spent stuffing myself.

Bless Ecuador, if only for its streetfood.

In Asia I basically survived on long ton, sticky rice wrapped in a banana leaf. Here they have all kind of versions of it, like humitas and tamales. I had both, and wasn’t done yet. I took a tortilla de choclo, a little corn pancake, and flushed it away with 2 cups of morocho. Oh my… this thick milky corn drink with cinnamon just established itself as my new addiction. I don’t care that all coffee here is beyond disgusting, I have morocho now. I ended the feast with a quimbolito, a sticky cake served in banana leaves, and left the place feeling fat and slightly embarrassed. As I couldn’t find any gringo’s yet and the locals just giggle and stare at me here I decided to start drinking all alone in the wine bar right under my hostel… pretty dangerous for a wine-head like me.
Very angry with my alarm I therefore woke up too early to catch a bus to Cajas, which I was told was safe enough to hike by yourself. After an impressive sprint to not miss it I fell into the arms of a friendly Swiss couple, Sara & Serge. Apparently my German is good enough to understand this challenging accent, so we took off with the hike together. Unlike the information in the Lonely Planet, there is no park entrance fee, which lightened up our mood... that was necessary, as after a loud thunder it started raining on high force.

Hm, not sure what happened with those bright blue skies that crowned Cuenca, but I don’t understand the fun of hiking around a misty lake while slowly getting wet and cold. Verdammte scheiße. I gave it a go though, but after 1,5 hour took the shortcut back to camp base and returned to Cuenca, freezing and disillusioned.
After a morocho-sugar-rush I was however refueled with new energy to hit the bars. My hostel celebrated its six year anniversary in one of the many clubs in the vibrant Cuenca bar streets, and I arranged some free VIP tickets for me and the Swiss. For once I am going to be smart and don’t throw any inside information of this bar adventure on the world wide web… but wow, that was one wild night.

[Intermezzo: Of all the many fellow travellers I met I seem to be the one with the highest rate of weird hostel roommates. It’s seriously alarming how many weirdo’s I attract. To give an idea, in Montevideo an old always-hammered lady had the disturbing habit to start barking at night. Like a dog, yes. While crying people wanted to rape her (seriously, that’s the one thing that whale-looking lady shouldn’t be worry about). In Colonia del Sacramento a guy started jerking off when I entered the dorm room, intensely looking at me. I changed to another hostel, where a German guy didn’t sleep, but just sat up in his bed all night with his eyes wide open, staring at everyone. In Rosario my muscular macho roommate kept his pants on, but woke me up every morning doing sit-ups in a very loud manner, right next to my pillow. Don’t let me even start about Copiapó, check the whole history here. In San Pedro de Atacama a French guy kissed me when I was asleep, and I for sure didn’t give him any clue to assume this was something I was after. Creep-mode on. In Uyuni I woke up looking straight into the eyes of a sweaty fat guy, who apparently had watched me for who knows how long. Peru was pretty normal, except of the high amount of people having sex in 12-bed dorms. Now, in Ecuador, I can add my Mexican roommate, who just jumped into my bed and started making a move. When I informed what the hell he thought he was doing he said I shouldn’t be worried, as he brought protection, smiling holding up a condom. Ohhh really, no fucking way, now I know you just randomly want to semi-rape me with a condom on I feel much more comfortable. I got him replaced with a British couple, who brought being hammered to a new level. When I tried to help the guy back into his bed, as I didn’t want to let him lie flat-faced on the floor with his pants around his ankles, his girlfriend stumbled into the room screaming not to offer any help to a ‘c*nt like that’. After which she threw up and fell from the stairs.]

Ignoring my ‘special’ roommates, I had a good Saturday in charming little Cuenca. Because of my own party history I couldn’t start the day properly before 2PM, after which all museums appeared to have shut down. I never saw so many closed museum doors in a day. The famous (?) booze-culture trade-off. The walk to and from all these museums was very enjoyable though, and especially the bohemian area surrounding the Tomebamba river attracted my positive attention.
As culture was nowhere to be found anyway, I decided to go to the most banal thing I ran into.

Only that name made me almost wet my pants. It was in one word hilarious. Before it started the whole audience had to get up, place their hand on their chest and sing the national anthem. Seriously? For those oily baboons? Only the sight of the audience was worth coming: Every man resembled either Robert de Niro or Sylvester Stalone, wearing the fashion that was popular when I went to kindergarten. Then four shaved oily men in polyester tanga’s entered the stage, simultaneously pushing up their muscle-work in poses you can’t really take seriously from grown-up men.
After the collective part every gorilla got a minute of their own, to do a titty-dance on a piece of self-selected music they relate to (don’t expect any Tchaikovsky or Prokofiev here). This went on for hours. It is really impressive to see how hard some men work to make their penises look smaller. After 2,5 hours I couldn’t take it anymore, it was just too much. So I walked out for dinner. Vegan, after this meat fest. But it was a failed mission, these guys took all my appetite away.
In order to support the travelers’ community, I spend many hours per week to adequately document all information and advices for prospective visitors, accompanied by a (hopefully) entertaining insight into my personal observations and experiences. This service is and will remain free. However, if you voluntarily want to make a contribution and support my travels and thus the creation of new stories and information supply, here is the button you’re looking for:
Donate
Related:
- Citytripping in Ecuador: Quito
- Outdoors lover? Banos is your place in Ecuador!
- Where NOT to go to in Ecuador: Guayaquil
​- Check out Budget Bucket List's FAVORITE HIKING DESTINATIONS worldwide!
- Long times in the gym: training communist-style in Kaunas, Lithuania
- Crossfit training in Oaxaca, Mexico
​- Couchsurfing INSIDE of a gym: Xela, Guatemala
- Partying a bit too hard in Sucre, Bolivia
​- Rainy hikes in Tapantí National Park, Costa Rica
- More hiking in the rain: the Scottish highlands, Glencoe (West Highland Way) and Isle of Skye
- A vegan on a meat and dairy farm in Paraguay
​- A vegan pilgrimage in Belo Horizonte, Brazil
​- Food poisoning in Peru
- A streetfood tour in Cartagena, Colombia
​- A lesson in Belizian streetfood: Belize City
- The pupusas from El Salvador: Suchitoto
- Mexican cooking classes with a Couchsurfer: Valladolid
​​- An overview of all Mexican streetfood [Palenque]
- Colonial city in Argentina: Salta
- Colonial city in Uruguay: Colonia del Sacramento
- Colonial city in Bolivia: Sucre
- Colonial city in Colombia: Cartagena
- Colonial city in Peru: Arequipa
- Colonial cities in Brazil: Ouro Preto and Paraty
- Colonial city in Guatemala: Antigua
- Colonial cities in Nicaragua: Granada and Léon
- Colonial cities in Mexico: Merida, Oaxaca, Puebla and San Cristobál de las Casas
​​- Malaysia's hottest hiking spots: visit Taman Negara, Cameron Highlands, Penang, Miri and Kuching!
- New Zealand’s finest hikes tucked away in one delightful place: Kinloch
​- Discover Romania's enjoyable cities: Bucharest, Brasov and Cluj Napoca
​​- The prettiest historical town in Romania: Sighisoara!