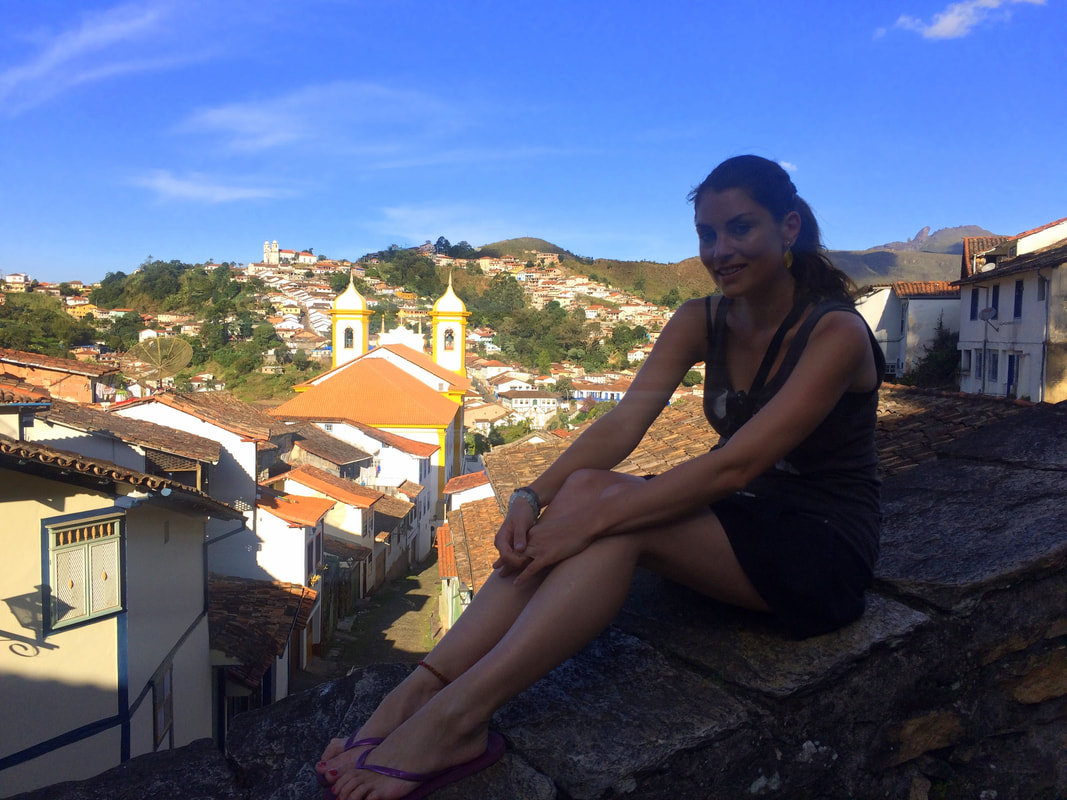 Ouro Preto, black gold… Sounds mystical and kind of pretentious at the same time. And yet, the name is so painfully close to the truth. The reason the Portuguese were drawn so much to this region was indeed the abundant presence of this costly mineral, for which they sacrificed the lives of the countless black slaves they violently abducted from the continent of Africa. Sure, it looks all bright and pretty, like a cheerful copy-paste of Portugal with the good-natured dark-skinned African descendants living into it… but the history of this photo-friendly colonial town has its roots in the suffering of the miners who were forced to shorten their miserable lives working without shoes, clothes or protection, without sleep and without sufficient nutrition, day and night in the cold and humid mines, starting when they were only a child. ​ 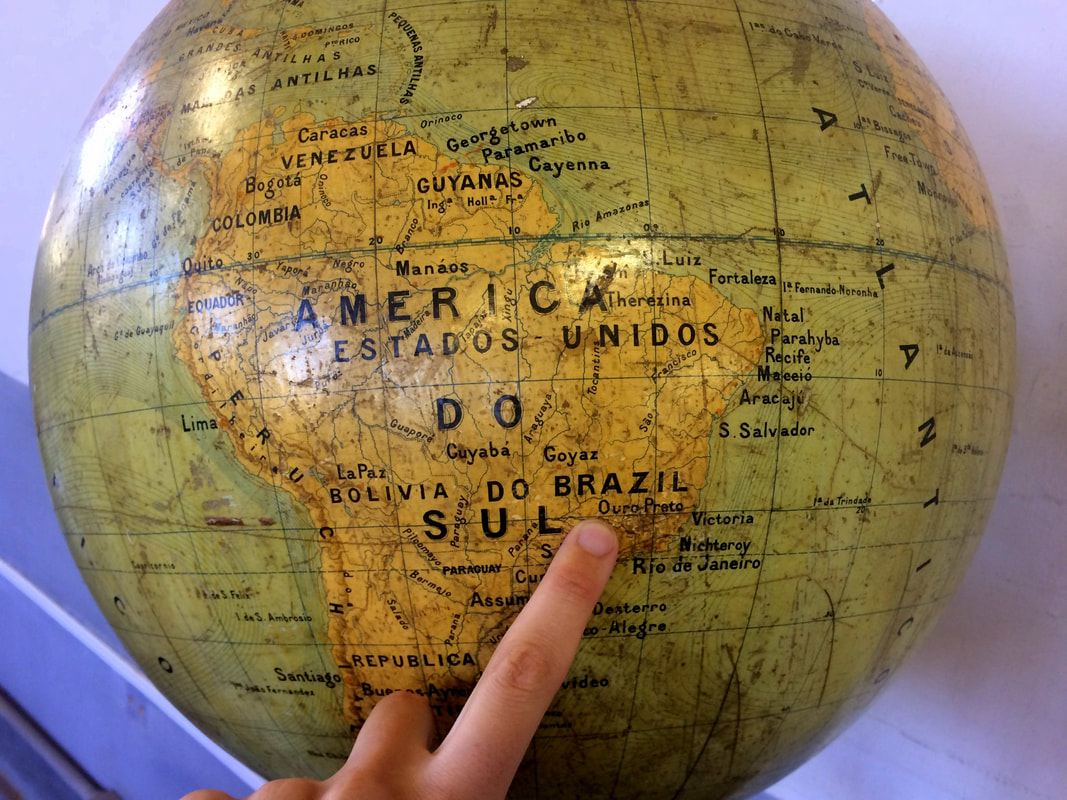 ​I was determined to discover both sides, the prosperous present without ignoring the dark history.

So I hitchhiked over there, as the prettiest province of the whole of Brazil (according to Brazilians) gave me the confidence to take risks again. After I bounced over the snug but terribly uncomfortably constructed cobblestone streets of the inner city I reached the Uai Hostel where I was going to stay at for free. You see, although surprisingly, many hostel-owners also possess a Couchsurf-profile, as they sometimes prefer to take their own business away in exchange for friendship or a cultural trade-out. Or just because they like to have exotic foreign girls sleeping in their house, depends on the person. Leaving in the middle to which category my host Rodney belongs, at least a knowledgeable guide he is. 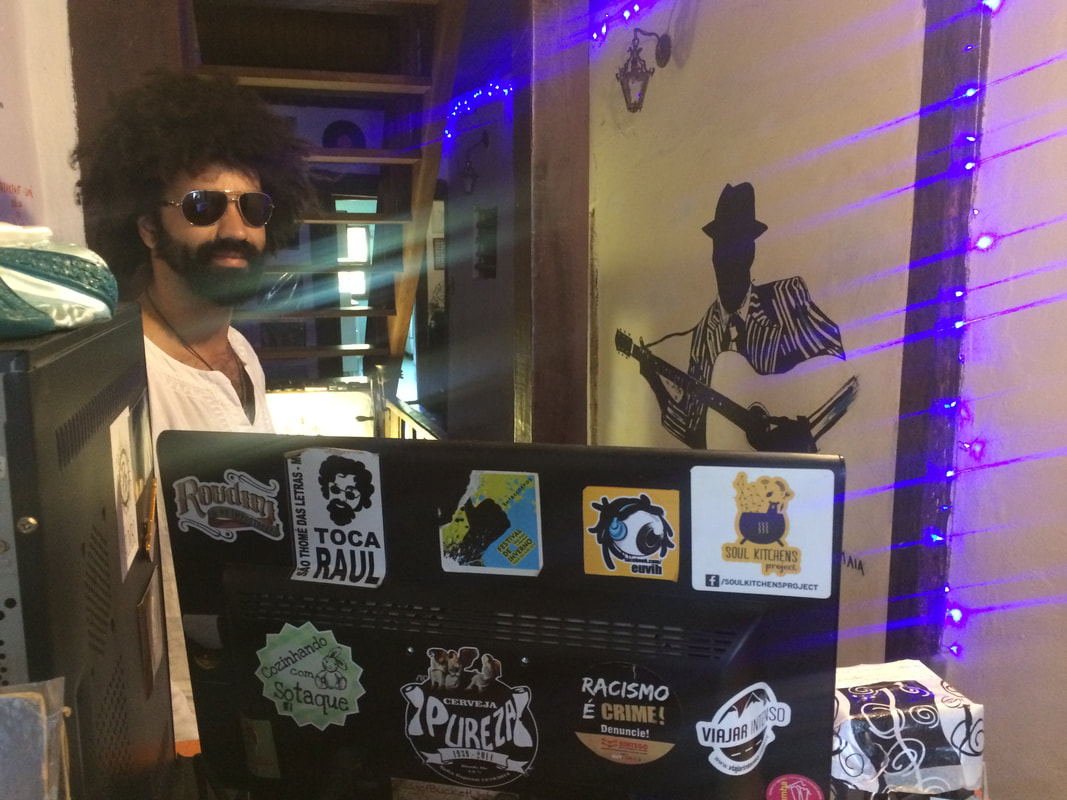 And he has a fetish for old-school vinyl, with an extensive metal-section in his collection. I’m a satisfied soul.      ​
I didn’t even drop down my backpack for five minutes, or he already dragged me all over town to show me the hidden highlights, all the while slurping on the true dark gold of current Brazil: açaí. From churches to look-out points to the Pharmacy Museum he used to work at, we didn’t leave any patch of the inner city untouched, walking (climbing!) the steeper than steep streets with an enthusiasm unheard of.       ​
As a (former because currently traveling) actress my personal favorite was the charming little theatre Casa de Opera. This adorably decorated wooden construction of the performing arts feels like a big vintage doll house where you can still smell the history, a leap back in time of bread and circuses. I couldn’t help but sneak on the (back-)stage to start acting immediately… the act of pretending I was about to hit the squeaking boards myself to claim my spot in the limelight as the leading part of some illustrious musical, cheered to by an exhilarated crowd. Yeah… sometimes I get dragged away by this kind of stuff too easily.       ​ 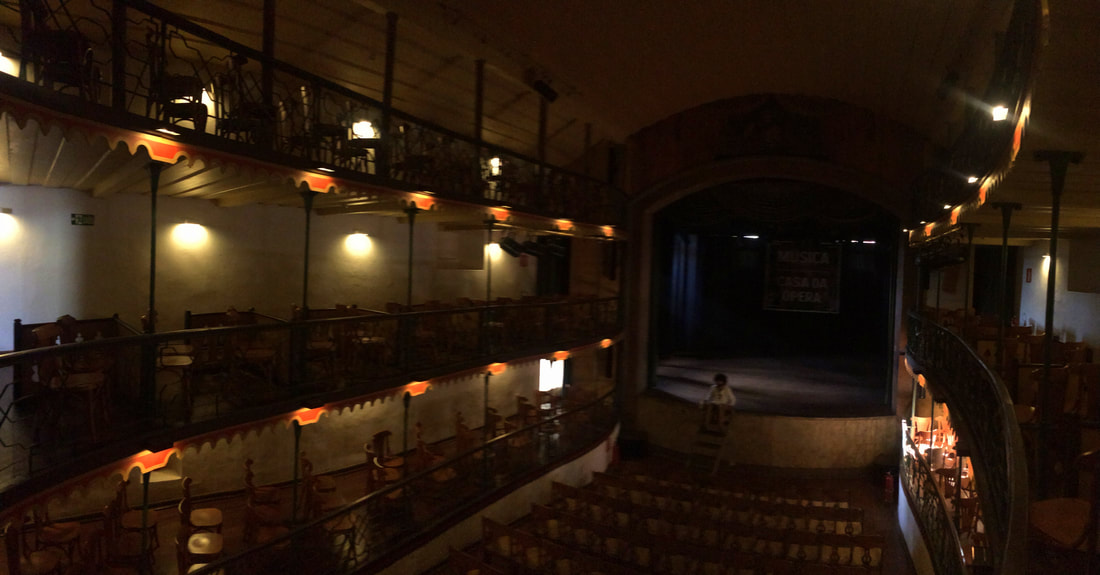 From cute to serious. Another place which should be forbidden to skip is the Casa dos Contos, where to my relief they didn’t even try to hide the past of slavery. Basically how we allow our society to treat farming animals nowadays, that’s how we used to treat our human minorities (I stared at a painting in which a Portuguese colonist castrated a male slave by crushing his balls in between two heavy pieces of metal and in the meantime thought back about this ‘green organic happy farm’ I visited in Paraguay where they cut off the balls of pigs and goats with some scissors altogether, without anesthetics). The first was abolished in Brazil in 1888, let’s now fight to let this freedom apply to all living creatures! 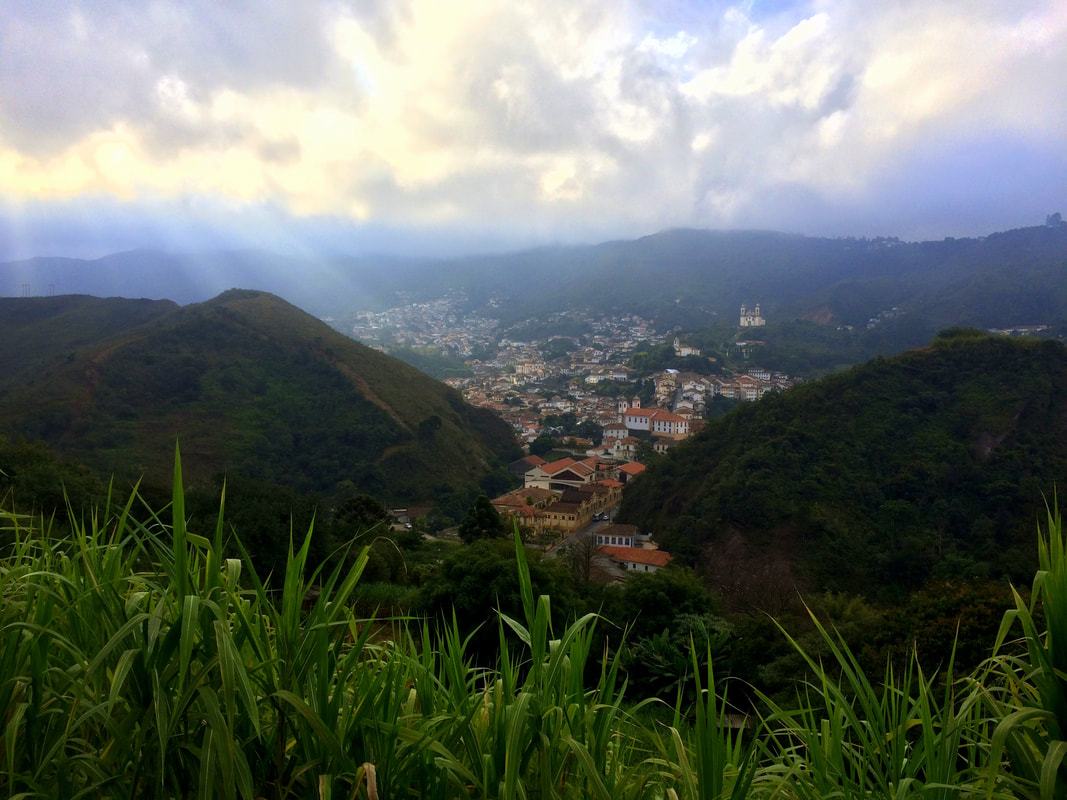 A day of polished museums and exhibitions is surely gratifying, but sometimes you get a better idea from simply going low and dirty.

Into the mines! As nowadays they figured it indeed might be slightly reckless to force people virtually naked into the unstable caves with solely a pickax, they now let you pay an admission to leisurely stroll through these dark corridors of history, fully protected. Put your hiking shoes and helmet on and follow the slippery pathways into the obscurity (of humanity).
There are many mines open for visitation, I went with the recently discovered Mina Palacio Velho.
​
From the mines were these black lives were doomed, to the place where they went to once slavery was abolished and the ways to a new force-free life were freed. Lavras Novas, the idyllic mountain hamlet the new free men fled to after their hardships. 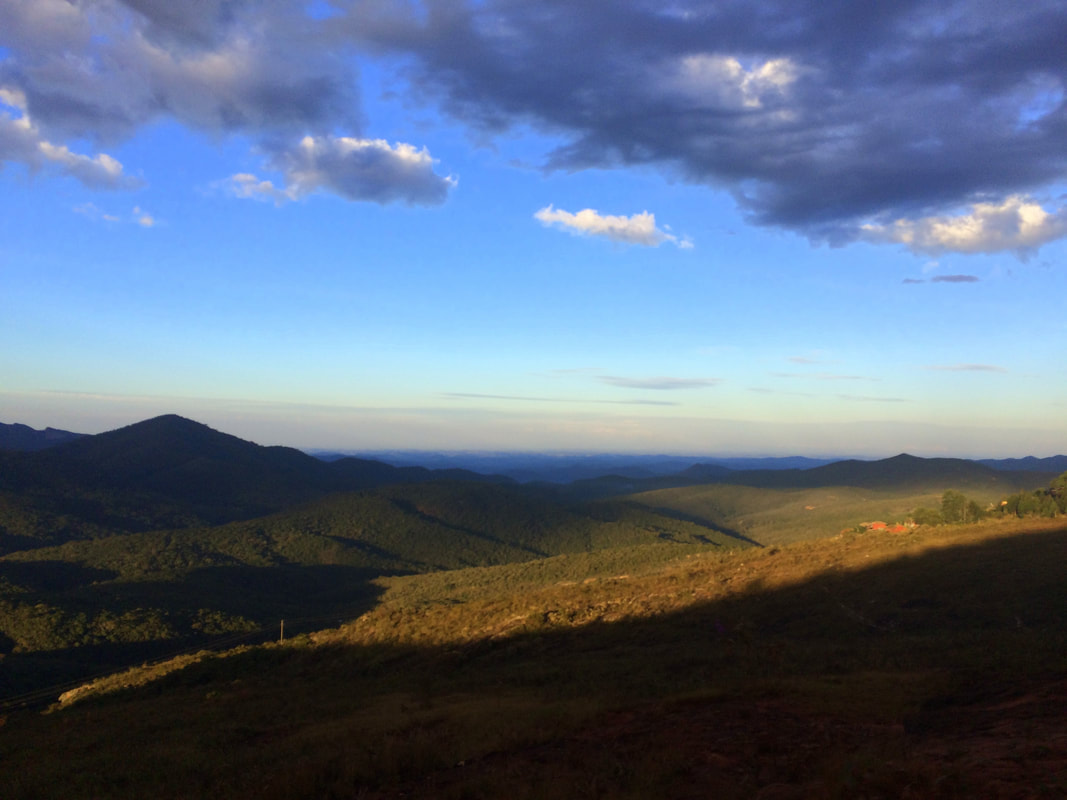 Excellent choice, as the natural riches surrounding this community is downright staggering. It’s impossible to get here by public transport, but a free ride in the car of a friendly stranger will get you a long way.       ​
Another common daytrip brings you to the neighboring municipality of Mariana. It’s not so much the place itself that attracts the crowds, but the train ride to get there is what lures the masses. My initial motive to travel here was to shake hands with fellow-Steemian Jordan who went out of his way to contact me via the platform, by e-mail and Facebook messenger to invite me over… but then vanished from Planet Earth. I tried to get in touch via his used media, but a reply failed to appear. Well, screw it, let’s give it a go, I said to myself after waking up early a Sunday morning, it can’t hurt to play tourist for once.
I even let the cute ticket-guy convince me to buy the more expensive Super Touristy ‘panoramic’ ticket* as I was staring into his big brown puppy eyes and I had no idea what I was saying. Man, I’m weak. Now I found myself in between the Kodak-masses and screaming kids in this embarrassing front-wagon entirely made of glass, exposing the absolutely-not-locals in this big humiliating aquarium… hundreds of people subsequently being all puked out in Mariana at the exact same hour, causing a serious white-people-invasion.
​
* My fake student pass gave me 50% off the rather steep ticket price. It’s worth a try people! 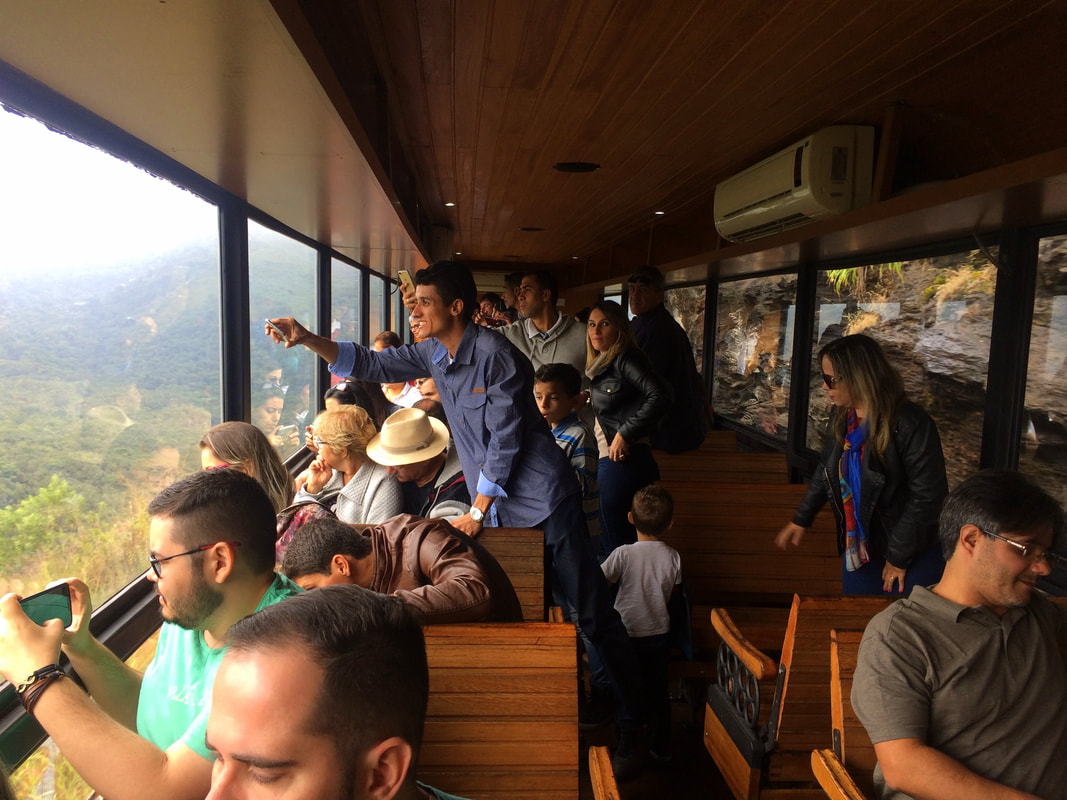 That said: yes, the train ride was quite scenic. Nothing I had never seen before, especially the waterfalls everyone went nuts on, but an undeniable beauty for sure.      ​
​The city itself? Well, it basically looked the same as Ouro Preto.
​
Which is why I went to Ouro Preto.
In order to support the travelers’ community, I spend many hours per week to adequately document all information and advices for prospective visitors, accompanied by a (hopefully) entertaining insight into my personal observations and experiences. This service is and will remain free. However, if you voluntarily want to make a contribution and support my travels and thus the creation of new stories and information supply, here is the button you’re looking for:
Donate
Related:
- ​Where to go to next? Check the Brazil Page!
​- Check out Budget Bucket List's FAVORITE HIKING DESTINATIONS worldwide!
- The mines of Potosí, Bolovia
- Kriol, the language of the former slaves in Belize
- Colonial city in Argentina: Salta
- Colonial city in Uruguay: Colonia del Sacramento
- Colonial city in Bolivia: Sucre
- Colonial city in Colombia: Cartagena
- Colonial city in Ecuador: Cuenca
- Colonial city in Peru: Arequipa
- Colonial city in Guatemala: Antigua
- Colonial cities in Nicaragua: Granada and Léon
- Colonial cities in Mexico: Merida, Oaxaca, Puebla and San Cristobál de las Casas
​​- Diving into Malaysia's history: Melaka
- Korean culture at its finest: Explore Gyeongju!
​- Discover Romania's enjoyable cities: Bucharest, Brasov and Cluj Napoca
​​- The prettiest historical town in Romania: Sighisoara!
​​- History preserved: Time capsule of Romanian culture Maramures
- Serbia’s throughout history… in Nis
- Budget Bucket List hitchhike trip to... Kosovo!