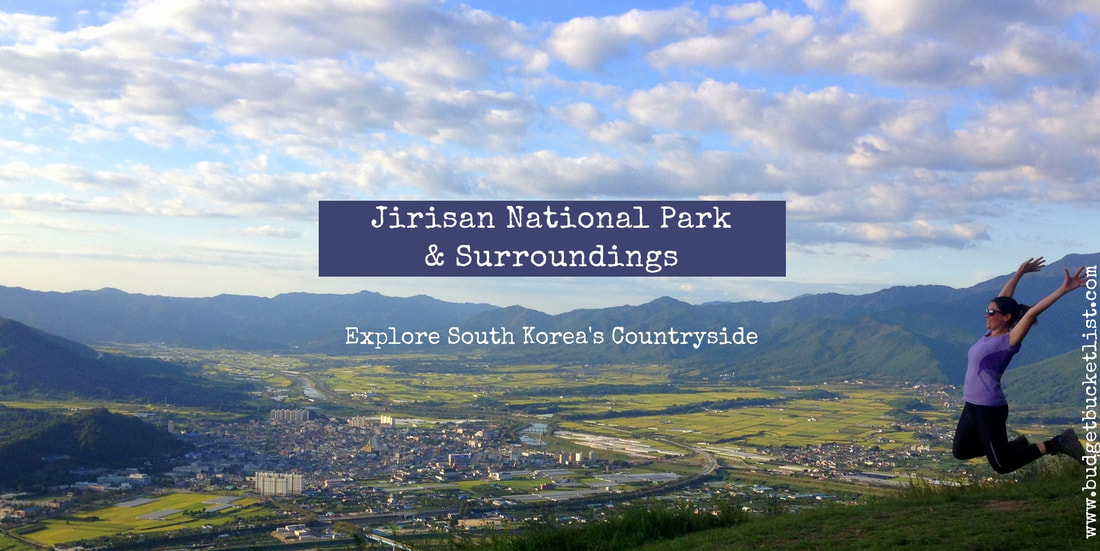 I hiked South Korea’s highest peak, so what’s next? Its second-highest peak of course!
​
If that sounds by any means easier to you, you might be in for a disappointment / relief: Opposed to Hallasan’s smoothly engineered wooden boardwalks the Koreans are so stoked about, Jirisan National Park is fitted with some actual rough ‘n rugged trails of an at times pretty darn hardcore level. As it should be. As an extra bonus this stunner of a natural reserve is surrounded by picturesque villages and countryside, scenically tucked in between the surrounding mountains... a pleasant get-away from the bustling big smokes, such as Seoul, Busan, Incheon and all those other 1mln+ cities in Korea. 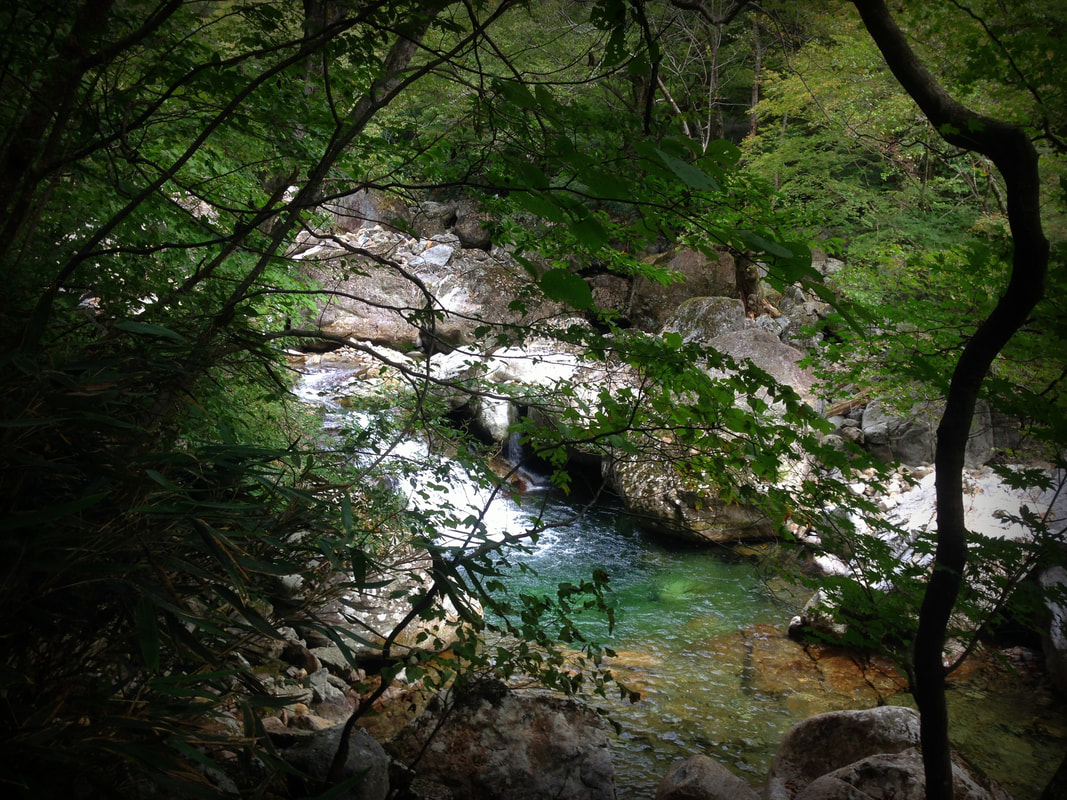 I needed to go, whatever it takes. Time, mainly. Even though from Busan it’s a mellow two-hour drive, public transport adds another 4,5 hours, which is rather surprising from a country that modern and technically advanced. Normally, hitchhiking would be my preferred mode of travel, but I found out the hard way that this is predominantly suitable for countryside and provincial roads... the main highways interconnecting Korea’s bustling urban districts are forbidden terrain for pedestrians, and even at the highway entries there’s hardly any space for fast-driving traffic to pull over. Usually I don’t really care much about such minor annoyances such as “rules” and “laws”, but you simply don’t want to be arrested in South Korea... they might not have a Kim Jong Il, but they’re still kind of sharing a nation, which terrifies me enough. Quite the bummer, as those lovely Koreans are definitely more than willing to take a foreigner along on their journey, if only out of sheer curiosity.

But in this case, four different buses it was: destination ‘Hoeryong’!* Which sounds pretty hilarious if you speak Dutch, yet I won’t translate in the light of profanity.


* Close to Micho, off-the-grid in the lush countryside of the province of Suncheon.
* For more detailed information on transport around Suncheon / Gurye / Jirisan, have a look at the Budget Fact Sheet [scroll up]
Suncheon

“Suncheon, never heard of it, what can you do there?” Plenty of things, actually! There’s the Suncheon Bay Garden the locals are very proud of, the so-called Suncheon Open Film Set (consisting of three villages each representing a different epoch from the 50s-70s), an innumerable amount of temples and a Korean Folk Village. I decided however to visit that one thing I wouldn’t be able to find anywhere else in Korea, and that’s the Suncheonman Bay Wetland Reserve.

The famous damp wetlands are formed by the biggest reeds-colony in the country, the canes outgrowing the length of a full-grown person. Within this high vegetation you can stroll over the lengthy boardwalks (in this case you need them – one step in that swamp and you’re in chin-deep) and spot some small wildlife such as a wide variety of birdlife, giant crabs and – my personal favourite – mudskippers (“oxudercinae” for pro’s).
Aren’t they fab? I can imagine it being ridden by a little goblin, while elves with panflutes throw glitters and rainbows to mark its way.

* Negative piano-sound * It is a bit expensive (KRW 8,000 per 2018)
BUT... * hopeful drumroll * I let my sneaky eyes scan the place and I found some covert entrance for you, where you can easily enter for free:


See this little bridge (photo on the left)? The path bows to the left and up into the mountains. Shortly after there’s an easily overseen fork, the main path going up, a path on the left going down again into the countryside. You can easily enter Suncheon Bay from there without drawing too much attention.
Gurye

After a hearty brekkie of noodles (seems to be totally normal here) I continued the trip to the charming little town of Gurye. Even though I was being hosted by a kind Canadian (aren’t they all?), this expat was so full-on integrated my stay couldn’t be considered more Korean. You see, I thought that after a year in downtown Amsterdam I knew what compact living meant, but boy, was I wrong. The standard Korean house - this one and basically 95% of what I found on Air BnB – consists of one room only, plus a separate ±1m² toilet/shower. This room generally contains a tiny open kitchen with fridge and washing machine, maybe a low table and well... that’s it. Where do they sit? On the floor, the standard Asian pelvis is trained to such a degree this is actually a sustainable, comfortable position to them. Yup, those white zen yoga insta-models can collectively eat their heart out! And where do they sleep? Also on the floor. Koreans don’t do beds: They roll out a little mat and off they snore. I admire it. I’m all for small spaces (less to clean). We Westerners think we invented this new trendy thing called “Minimalism”, but Koreans have been rocking the lifestyle for centuries.
Another thing they do pretty damn well is food. And this is a vegan speaking in the land of meat galore. Ever seen a fat Korean? I’m sure there are, but I’ve hardly ever seen one.* They just know how to eat healthy and making it taste absolutely scrummy.

* In fact, the obesitas percentage is 6.3% in South Korea, opposed to 36% in the US (the fattest country worldwide being Nauru with 61%, in case you wondered)
​
Some classics I tried in Gurye:
F.l.t.r.: Bibimbap, Gimbap (Korean sushi) and the interior of lotus flowers... all flushed away with a delicious rice wine (makgeolli). Bog in!

All proteined up? Time for some mountain hiking then! And you’re in luck, as Gurye is located right next to the famous Jirisan National Park (as is Namwon and Hamyang). The park is passable by a wide variety of trails, among which you can make numerous combinations for overnight- or day trips. 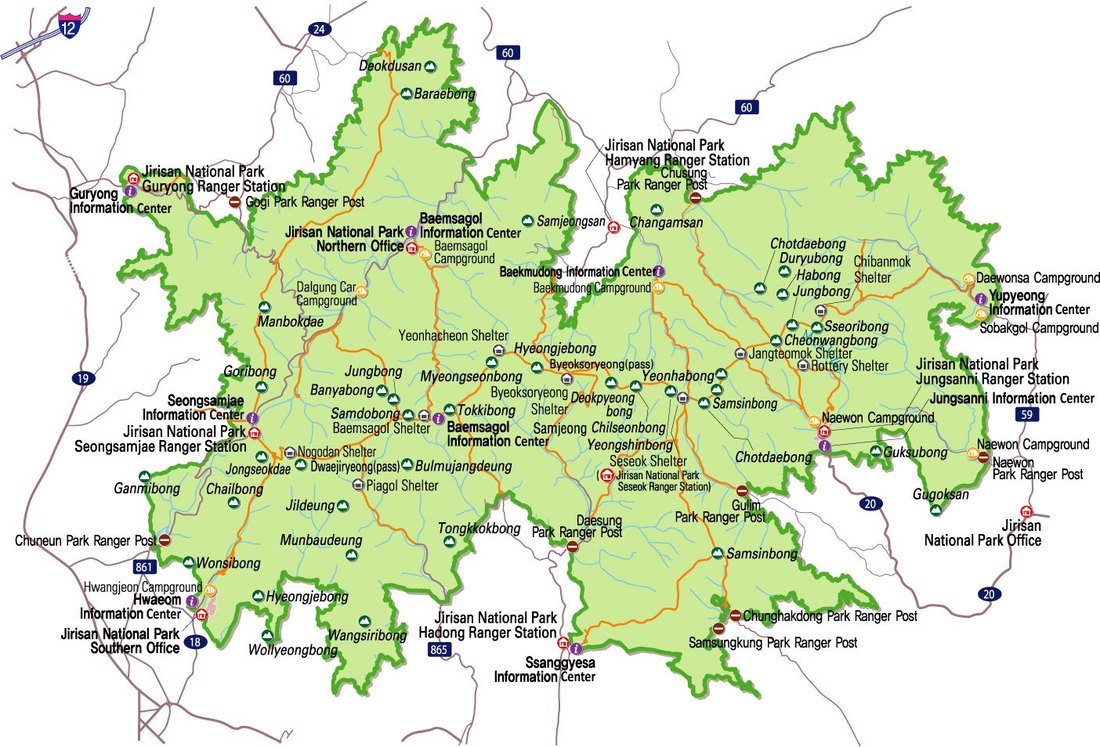 ​The “full monty” comes in the form of the Jirisan Ridge Hike (from the Hwaeomsa Temple to the Daewonsa Temple) which will take 3-5 days to complete, depending on your level of fitness. You’re not allowed to camp within the national park, but cheap and well-equipped shelters are provided for some well-deserved hiker’s rest (check the fact sheet for a link to the booking-website).
However, my visit overlapped with Chuseok, the Korean interpretation of Thanksgiving providing a 5-day long holiday,  and therefore all mountain refuges were entirely booked. I was left with some shorter (but splendid) day hike options.

Full of beans (literally, when it comes to energized vegans) I took the bus to the Piagol Valley*, as the news had reached my ears that this is one of the most die-hard trails. If you only have one day, you might as well make the most of it. My excitement dropped a notch when I saw all the hysterical bear warning signs. Within nano-seconds I envisioned myself facing teddy, legs spread and holding my backpack above my head while uttering delirious growls, as I watched too many survival documentaries. Being attacked by a bear, that’s just one of those typical things that would happen to me.

* Once an hour from 6:40AM, look out for the 피아골-sign – if you enter by car you have to pay the entrance fee for the Yeongoksa Temple (KRW 1,600), but by bus you drive passed for free. 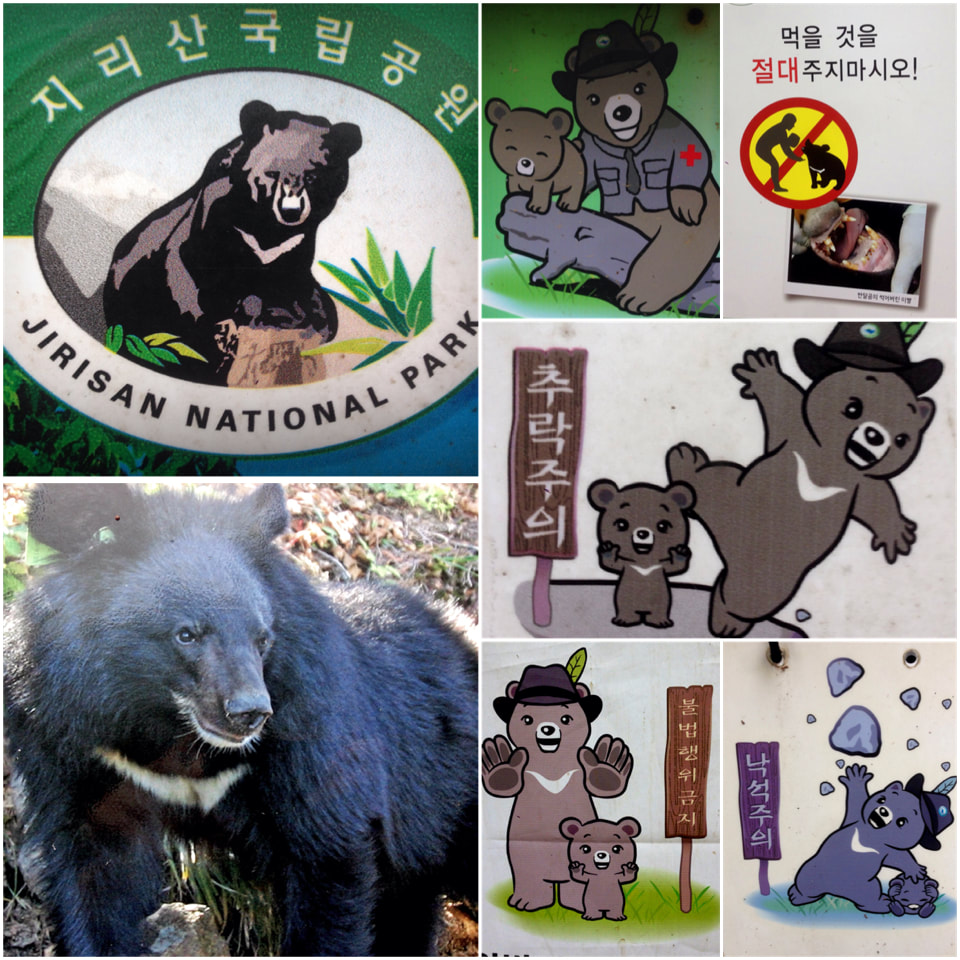 I’m almost disappointed that it didn’t happen, it would make one hell of a story (which I might not be able to tell afterwards). In reality, the Asiatic Black Bears almost went extinct, but are luckily growing in numbers again (currently just under 60) due to the successes of a protection program. However, the chances to run into one, especially during daylight, are practically nihil. Luckily, the pure forest sightings and shattering panorama’s from the mountain top are more than enough to make these hikes worth your while.
Don’t be fooled, you need some tight thighs to beat the steepness of these trails, some sections go almost vertically up. Also the trail I took down, connecting to the Hwaeomsa Temple complex, can be described as knee-breaking brutal. BUT, you will be rewarded with free entrance when entered from the other side, which saves you KRW3,500 (per 2018). From all the shiploads of temples you will undoubtedly visit during your stay in Korea, this one takes the crown.

​
* Be aware: To sneak in for free from the opposite direction you have to go off the trail when you see a little bridge on the right, which you’ll have to cross in order to reach a parking lot. You can go in via the back entrance on a small hill. 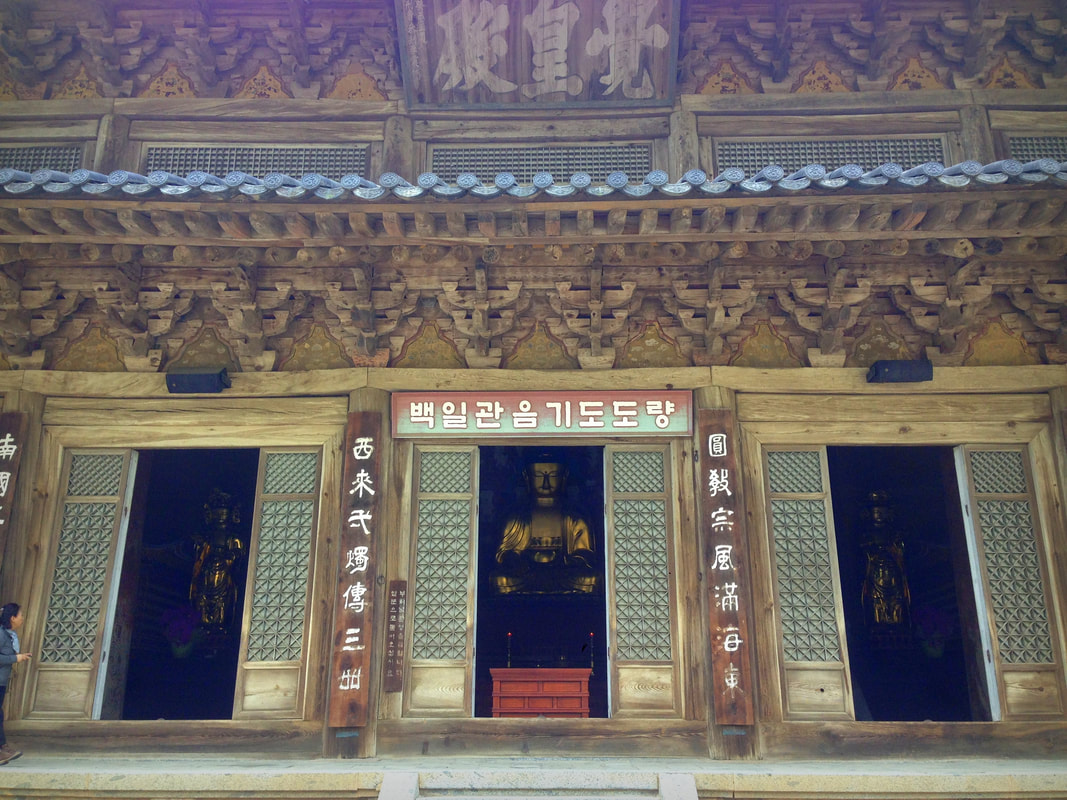 Osan Mountain & The Rest of 'Em

Hiked every trail of Jirisan National Park? And still not knackered? Great, because this is just the beginning. Look around you: Aaaaaaaaaall these mountains, they can aaaaaaaall be climbed. Even outside of the protected national park there are mountains as far as you can look... and they all have extensive trail networks. Good news for us, as you won’t ever run out of things to do. Even if you spent months in a row walking every single track available, it would be a totally new experience once the season changed. People travel en masse to this region to admire the pink blossoms in spring, barbecue the sultry nights away in summer, photograph nature in all its bright shades and colours during autumn and conquer the snowy peaks in winter. More music to ears: Wild-camping is kind-of-allowed everywhere on these non-national-park mountain tops. Which is exactly what we did. Right behind the Saseongam Temple. 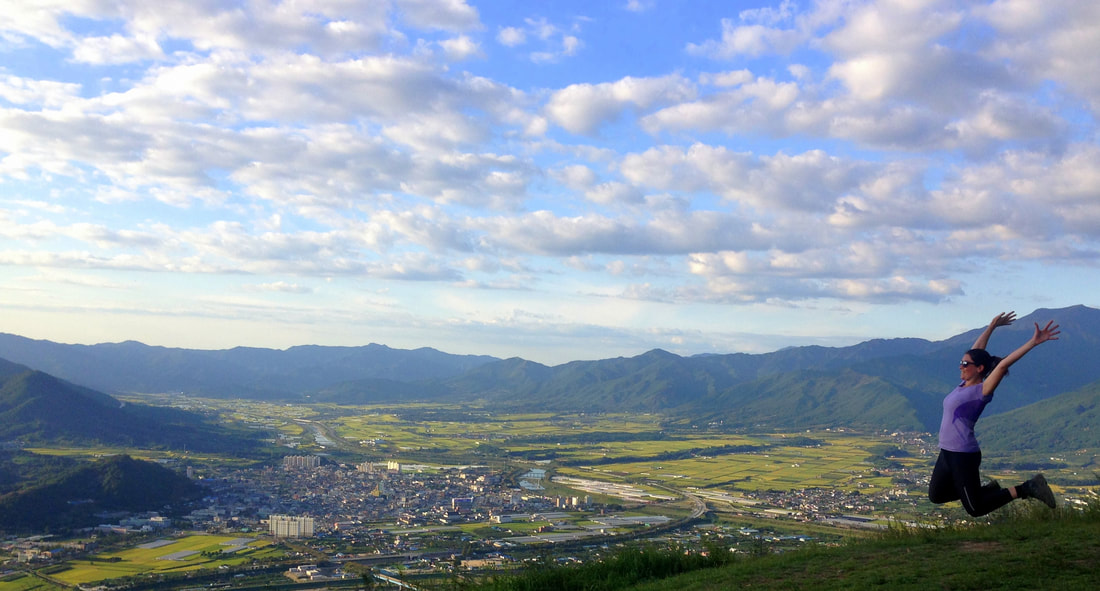