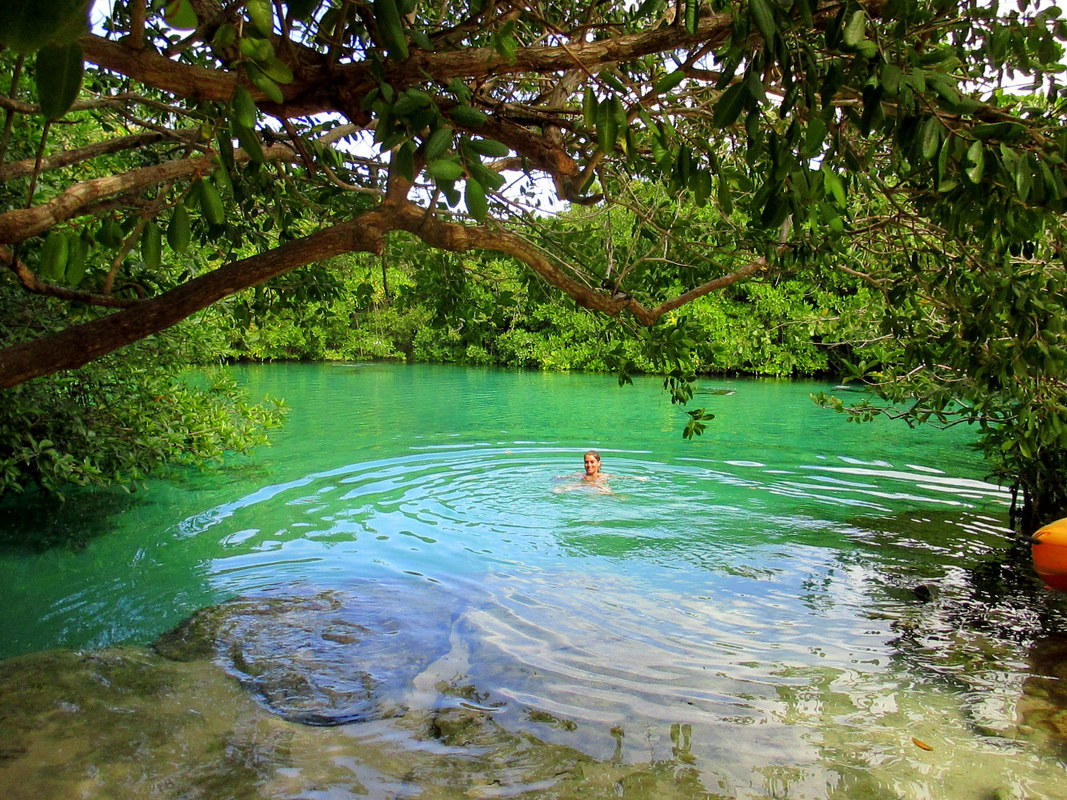 It took me way too much effort to reach Tulum. To sketch the scenario: Being the broke backpacker I am I decided to give the Mexican hitchhike system a go… Yeah, right. It started all fine with some friendly Fernando, Alejandro, Gonzalo, Rodrigo, hell knows how they call their boys here: some friendly GUY giving us a ride to the gas station along the Palenque-Chetumal-Tulum-highway. For sure some good ol’ moustached trucker would pick me up right? For sure not. At least, I got some offers, but they didn’t include the man that travelled with me at that point in time… Talking about safety precautions. To sum up all the misery: I stood there with my thumbs up at that gas station for about three hours in the pouring rain with soaked clothing, like a drowned sheep in a dripping poncho. Cooled off by the wind. Starving.
​
There is a point in the hitchhikers existence to surrender, accept the defeat (The future would learn that this would be a sad exception, but nevertheless, my self-pity was boundless) 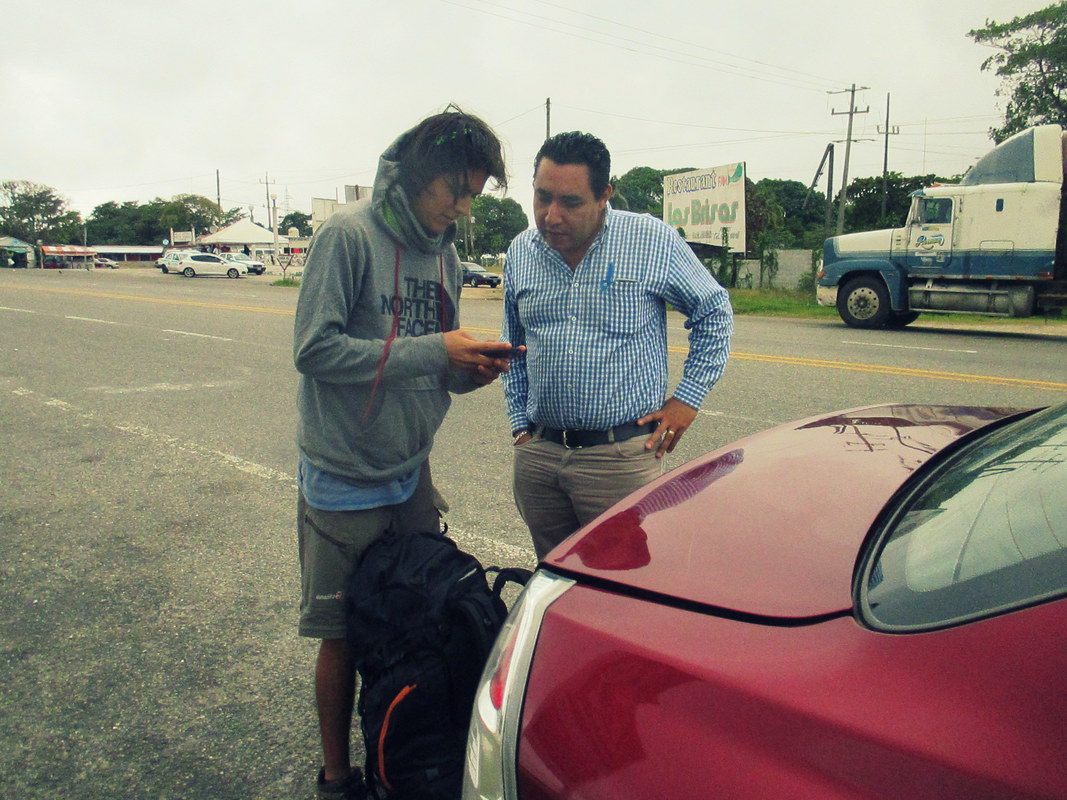 I returned to downtown Palenque and waited for some form of public transport to arrive. Not the $45-ADO bus every other foreigner takes, splurging is not a thing in my travel style: Nope, I took the local alternative, which I bargained down to 300-pesos, a price adequately matching the discomfort I got back for it. Eight hours it would take. Eight is Mexican slang for twelve. At about 5AM (I noticed it’s an hour later here) Tulum was all mine. There was not much to it at that hour though, so I decided to wait for sunrise and look around for cheap accommodation, as no Couchsurfers in this place every properly got back to me. Another misfortune: The touristy Caribbean part of Mexico is not as cheap as the southern Chiapas. Prices basically double here. Bummer. At 8AM and walking half a marathon with a 25-kilo-backpack on (yeah I don’t know why either) I could finally get into a room and collapse at the spot: the true delight of the traveller. 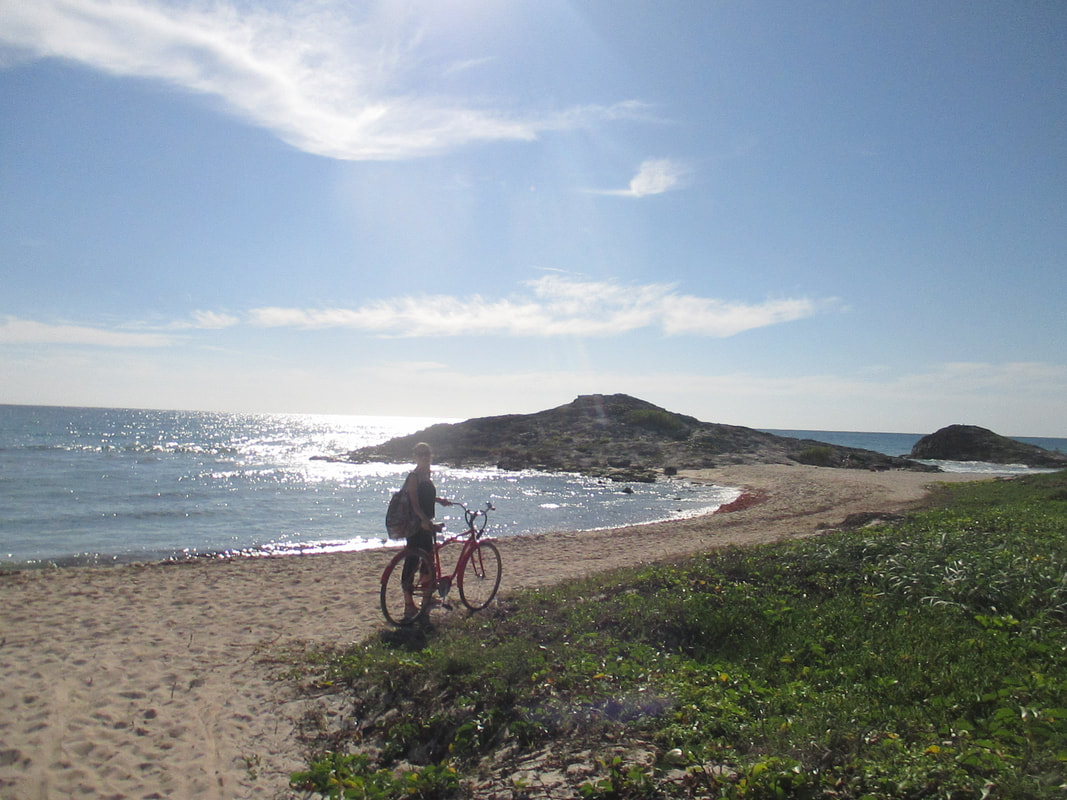 Whatever was left of the day after a few episodes of coma was spent on planning the other day. In a nutshell, Tulum’s options can be limited to: adventure- and watersports usually involving animals (not vegan, so that’s a no-no), beaches and an overwhelming amount of cenotes.

Eh, okay. Yes, apparently this peninsula is the cenote-hot-spot and as you need about three weeks to see them all (I’m talking Tulum only) I just settled with one. Oh, and surprise surprise: There are Maya ruins too, one of the zillion spots in this small region.
​
After I got myself a rental bike that’s where I headed to first. However, once there I wondered why I actually wanted to see yet another pair of delicate bricks after having seen so many already. The Caribbean Sea lured at me and demanded some time instead.
​As I also rented a snorkel mask I continued my journey to the first cenote I could find… cycling on the highway. That’s apparently totally accepted in Mexico, leisurely cruising in the gutter of the freeway while cars pass by at a 120km/h speed. When they honked, I cheerfully rang my bell, we were sharing a road after all. 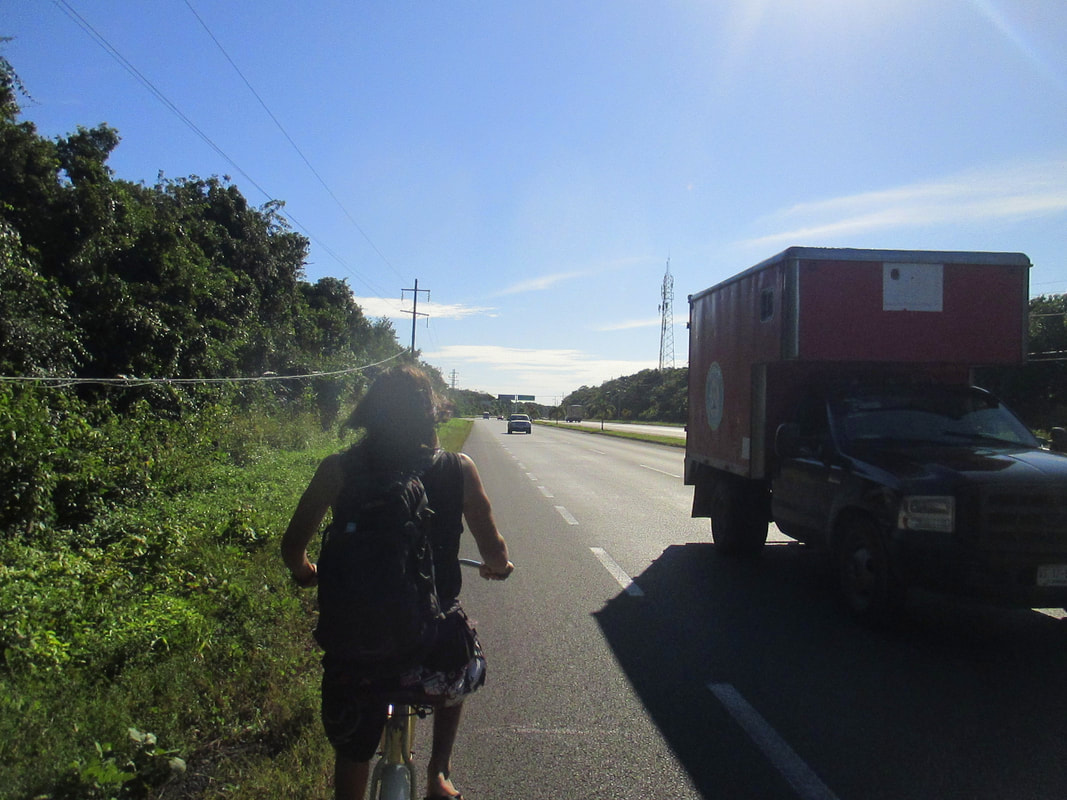 I followed a sign to Casa Cenote and as it turned out this was a lucky choice. Maybe I’m not the cenote-all-rounder, but I found it really surprising to find such crystal clear bright blue water in the middle of some mangroves. Why not jump in? 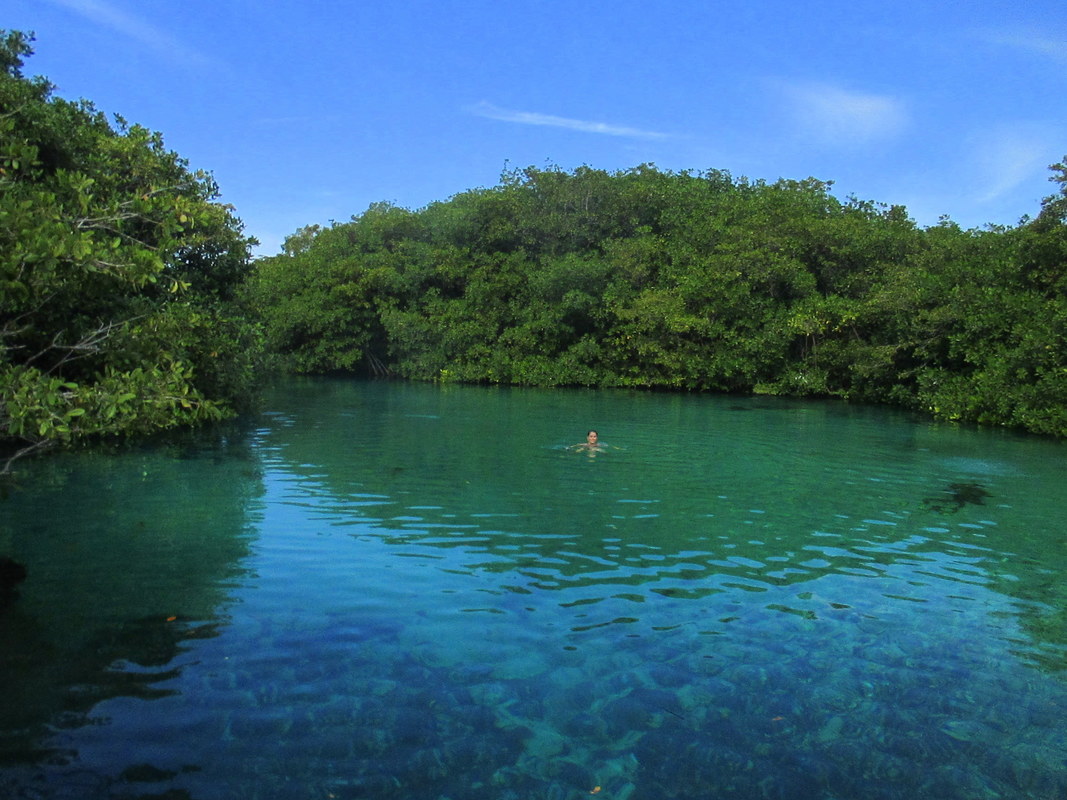 ​Having paid the fee they coincidentally JUST raised this week, my white chicken-legs were ready for an icy dip in these natural springs. Hello snorkel mask, thanks for showing me the cute little fishies nipping the nutritious mangroves route. I waded all the way into the jungle, following the swirly waterroad into the greenery. Gladly I took note of a guide’s remark mentioning a nine-meter underwater cave which was worth checking out. Not being as properly equipped as the scuba divers sharing this water I opted for something else I picked up on during my PADI Open Water course: a skin-dive. A plunge for the poor, so to say. An excellent final chord to conclude the day with… 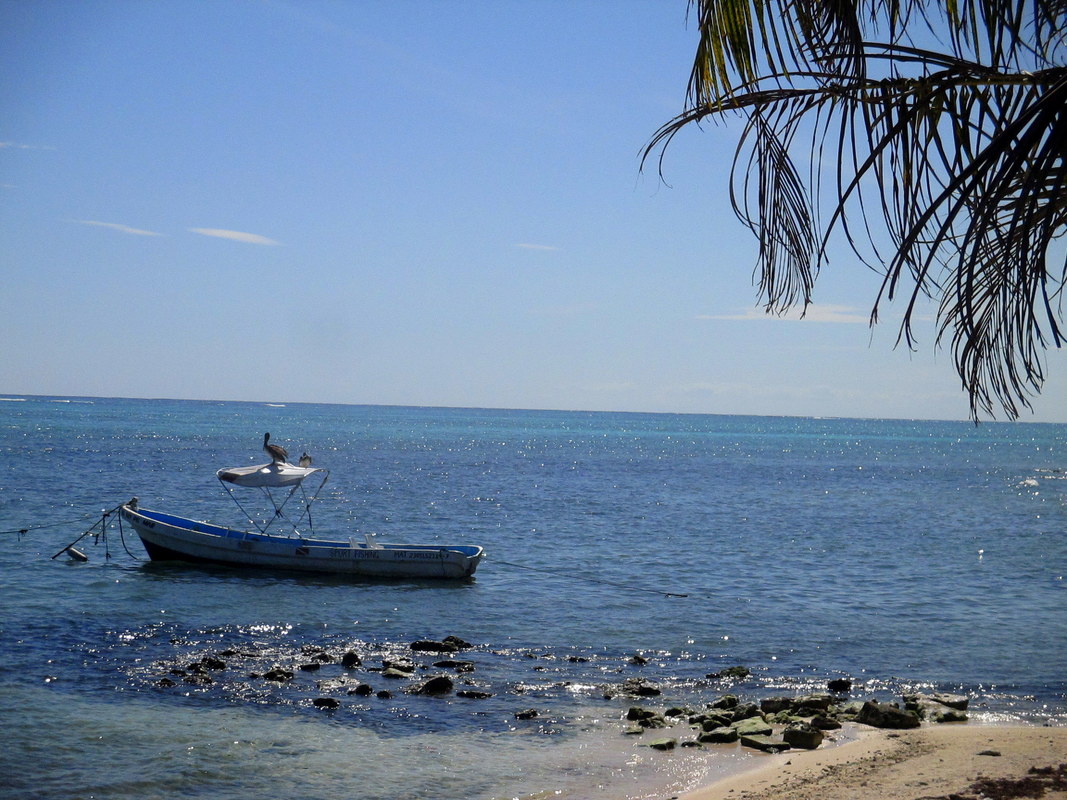 But the day didn’t end yet. After some nachos with guacamole, lazily shovelled in positioned horizontally at the burning beachside, I still had to go back… two hours on a bike which saddle already left some painful marks around my butt-bones (yes we have bones in our butts, if you don’t feel them you should put down that donut). That wasn’t all though: Unfortunately Tulum’s bicycle lanes are scattered with imbecile pedestrians cognitively incapable of processing the sound of a bell. After anticipating on them moving up and down and left and right like a drunken herd of elephants I had to make an acute emergency-stop, during which my foot slipped and my crotch got slammed on the horizontal bike bar. Terms have yet to be invented to describe the flood of pain tormenting my body at that very moment, I simply didn’t know where to go with myself. And before you think it’s funny: My underwear was filled with blood and once I tried to pee it felt like a knife was plunged straight into my urethra (Cannibal Corpse once made a romantic ballad about that, called ‘Fucked With A Knife’… it would make a touching soundtrack to go with this scene if they ever make a movie of my life).

I was an official victim of a genital injury.
So what do you do then? Right, go to the hospital AGAIN. January 2016 wasn’t my lucky month. It started off with an intense food poisoning ending up in a Salvadorian hospital (or death cell) with severe dehydration complications due to the continuous vomiting and diarrhea, abrupt weight loss and high fever. This lasted two weeks, but for the entire month my appetite was non-existent and my body simply reacted by throwing up after food intake. Now my body kind of kept itself together, the hospital required me for other reasons. Not that they could help me in any sense: Without even checking out what’s up down there some fat woman in a stained fleece sweater wrote down some medications, which I subsequently couldn’t acquire as the hospital lost its stamp and you can only get medicine with a stamp. I repeat: I was pissing blood and I couldn’t get treated because of a fucking stamp. Congratulations, Mexico.
​
So… To Tulum or to not Tulum? Do it, but keep an eye on the vag.

(I think that’s an appropriate end note for a blog… Moving, but yet so full of moral.) 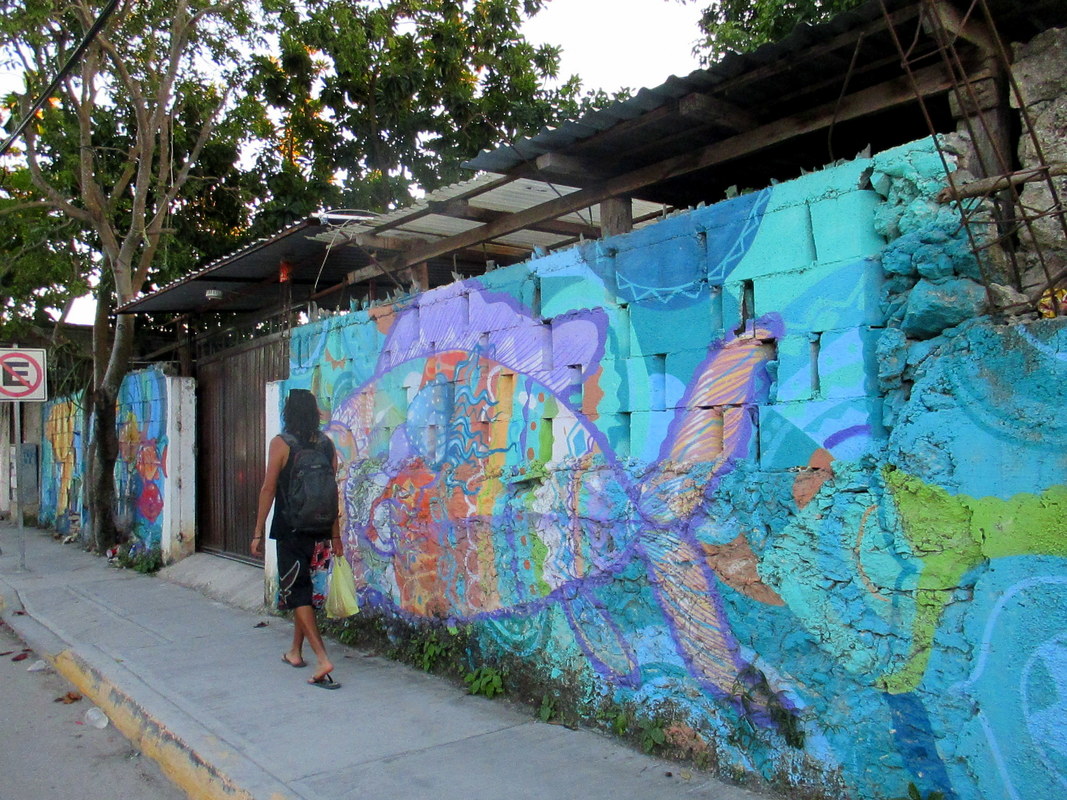