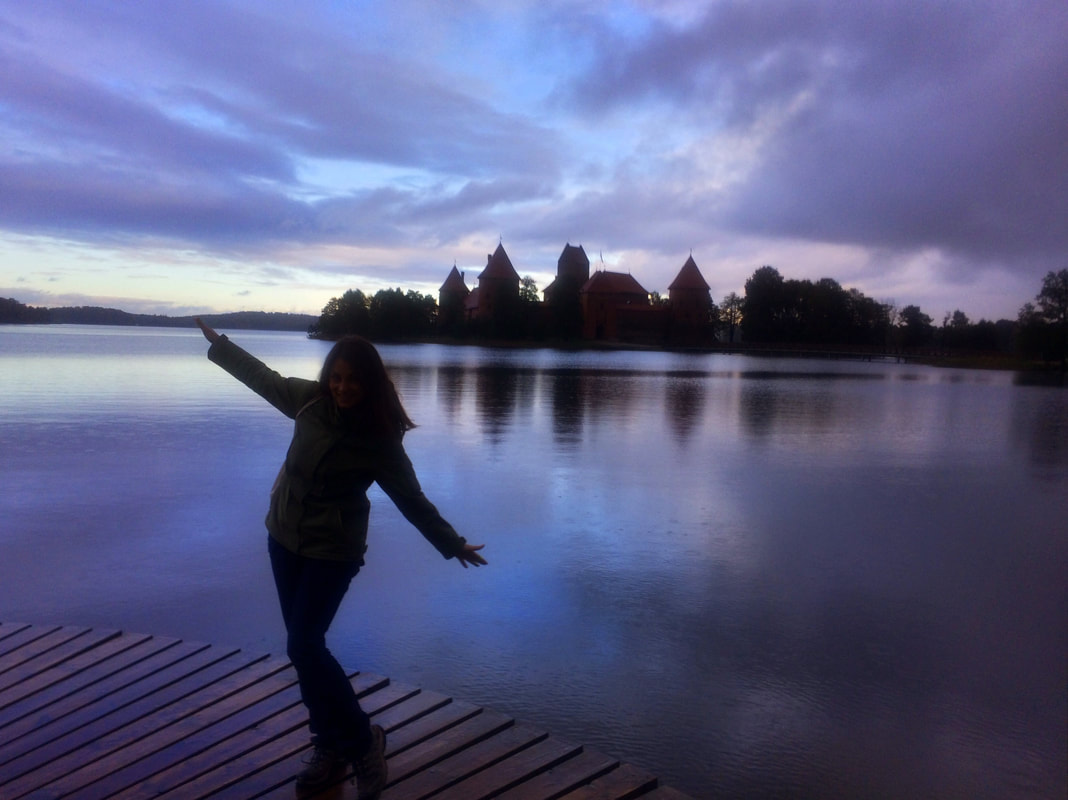 So I didn’t like Kaunas. At all. I didn’t like its communist-looking concrete blocks that have to pass for housing. I didn’t like the grey numbing streets that always seemed to be under construction but sadly enough weren’t. And I didn’t like the worn out people that forgot the art of smiling either. I really needed something better from Lithuania, so I left Kaunas earlier than planned.
​
I reached the capital Vilnius in the early morning, woken up by the cheerful chatter of my Couchsurf host Darjuš who drove all the way down there just to pick me up. Things were looking up. 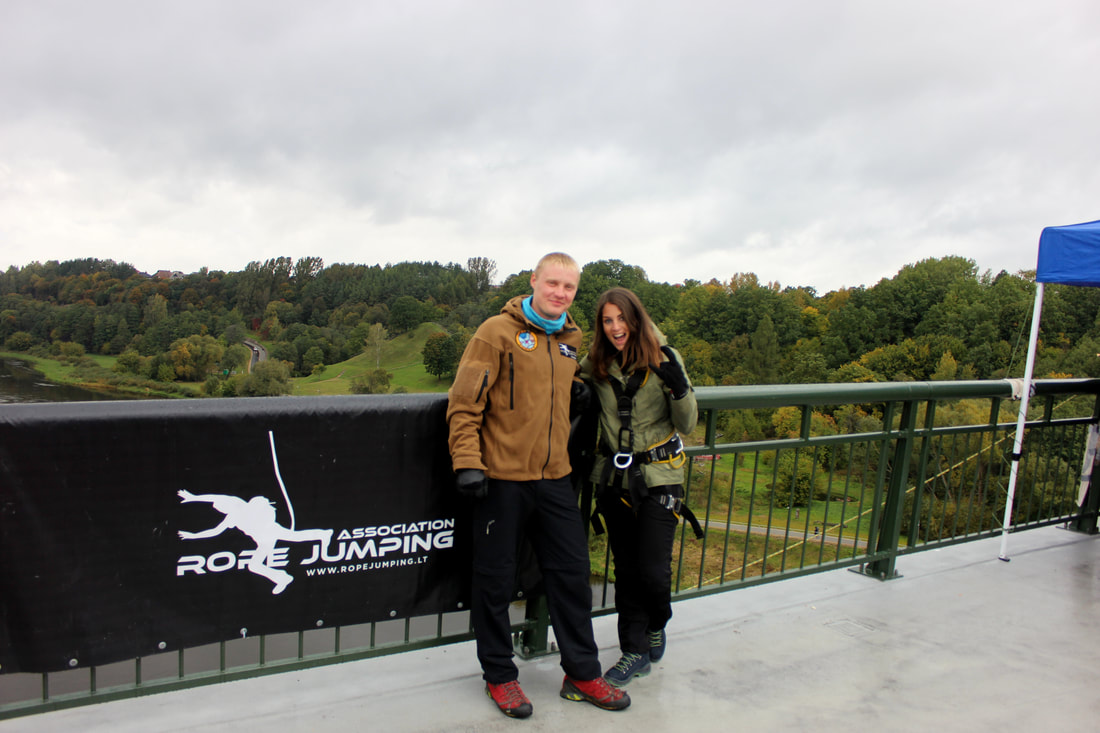 There was a reason I picked this particular guy. You see, one doesn’t easily get away with writing a profile full of thrilling stories about biking adventures and an appetite for ‘illegal activities’ without getting contacted by my persona. However, reality was even more exciting. Let me just start with the fact that Darjuš wasn’t only a guy who immediately crossed 14 countries by motorcycle just after he got his license, his main hobbies are also kite boarding, skydiving and base jumping. And the last thing he does 100% illegally off public buildings.

That’s right, he breaks in, sneaks up with a parachute (or a ridiculously dangerous wingsuit!), makes a free fall and then runs away from the cops.

Check out his YouTube-page, it’s insane.
​His neighbourhood

​
He made the Lithuanian news many times this way, although once he got featured because he inline-skated through the capital’s center dressed up as a serial killer with an actual roaring chainsaw (surrounded by his friends rolling around him like giant animals). But that’s another story. He got my attention.
​
After I cooked him a vegan lunch while he was running an impressive series of YouTube-videos in the background making fun of vegans...
Ok, this is hilarious.
​
... he threw me my coat and took me on a little adventure. “Come on, backpacker, you want touristy stuff I give you touristy stuff.” And just like that he drove me down to Disneyland. I mean, the real-life version, which – can you believe the coincidence? – is situated in Lithuania. It’s called the Trakai Castle and as the rain had wiped all visitors away, it was waiting just for us. The weather’s aftermath blended with sunset, creating a spectacle almost too surreal for the eyes to capture.
​The main reason Darjuš ever visited this place is because there was a Geocach to catch. A what?! Yeah, it’s new for me too. Apparently there’s this worldwide network of adventurers hiding clues and little gifts in the most unexpected places, creating a global treasure hunt! The treasure being not so much the material gift inside the little boxes, but the extraordinary places where they’re hidden. 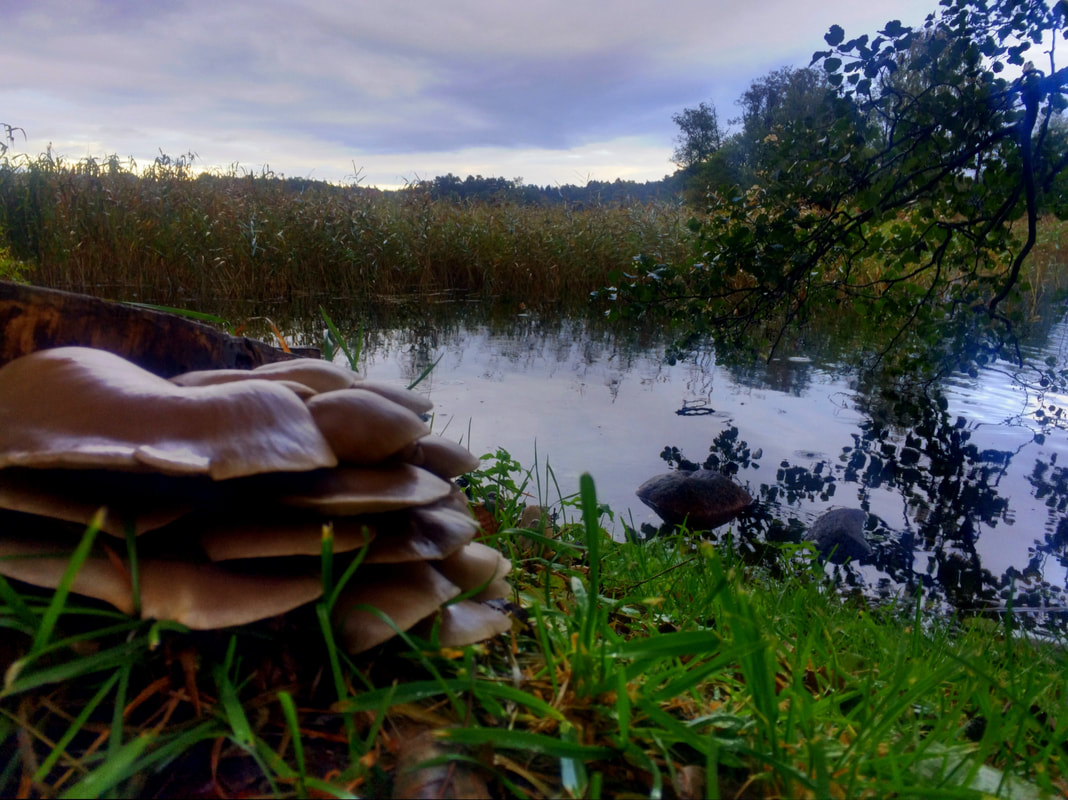 It allowed Darjuš to explore the most spectacular places in his country, including the area of Lentvaris, where he once found a catch in a spooky deserted mansion, as well as Verkšioniu Regykla, a tucked away picnic area looking out over the lush hiking paradise called Neries Regional Park which we would traverse later on. While the far-reaching view over this thick sea of leaves in the exact colours of the Lithuanian flag (green-red-yellow) nailed me to the ground, I realized more than ever how much this country paid me back. 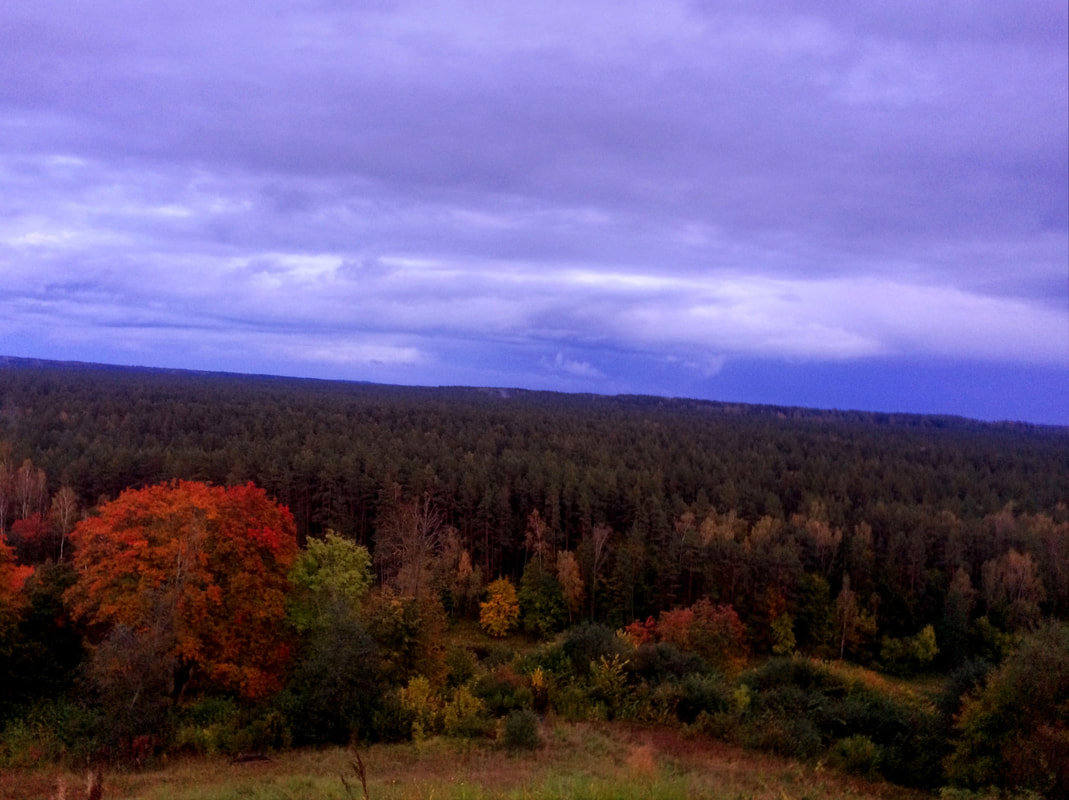 ​And it was only gonna get better. Remember I told you Darjuš is a fan of extreme sports? Did you ever hear of rope jumping? Well, it’s basically bungee jumping, but then straight up so you won’t get dizzy and can enjoy the view from the right angle. Besides this being one of his many adrenaline-pumped passions, it’s also his job. Yes, the Rope Jumping Association [www.ropejumping.lt] pushes people off bridges since 2006. And I was gonna be one of those people. 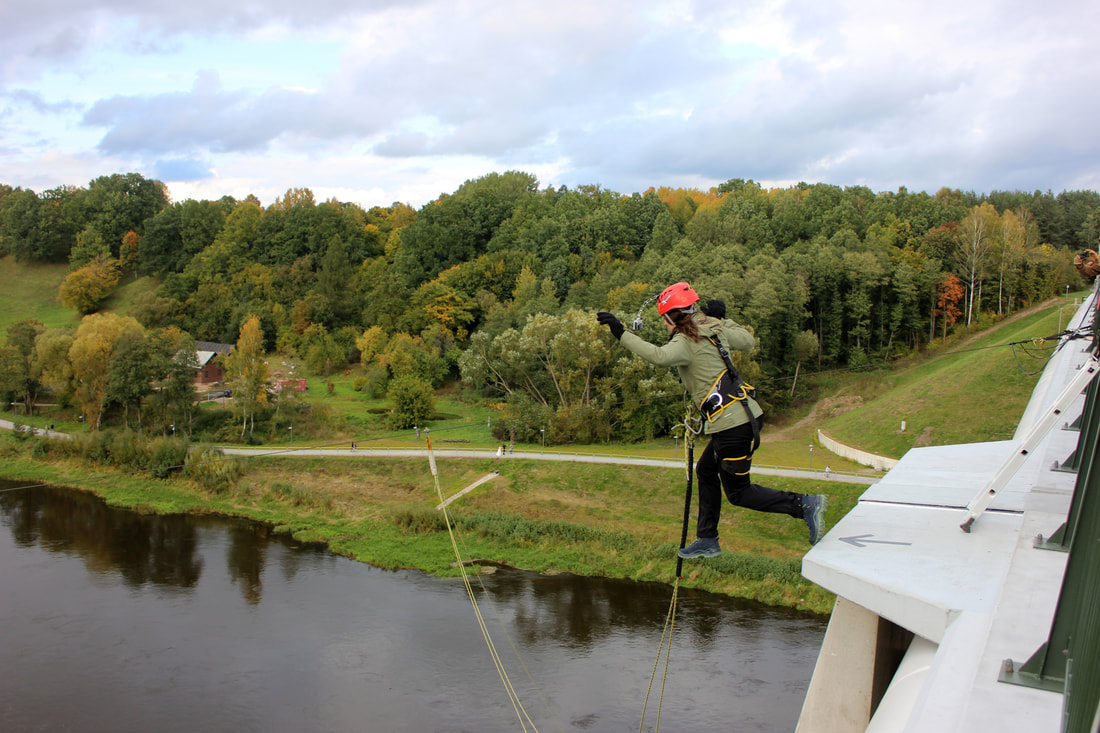 Initially I was just tagging on because the photographer couldn’t make it that day, and I knew how a professional camera works... right? But I know me, so that wasn’t going to be the end of the story. When I needed to go down to grab my lunch I jumped off that 38 meter high bridge [the highest one in the country], as that’s the fast route anyway. And then I did it again. Because, you know, THAT SHIT IS FUCKING AWESOME.
​But we weren’t done. I did all the cool stuff around Vilnius but I hadn’t actually seen Vilnius. So I promoted Darjuš to my personal tour guide, a role he reluctantly took on. Short but satisfying, we strolled over the wide classy lanes resembling the allure of Paris and Vienna... We jogged around the majestic cathedral and made a wish while circling around on our heels on top of the ‘miracle stone’: 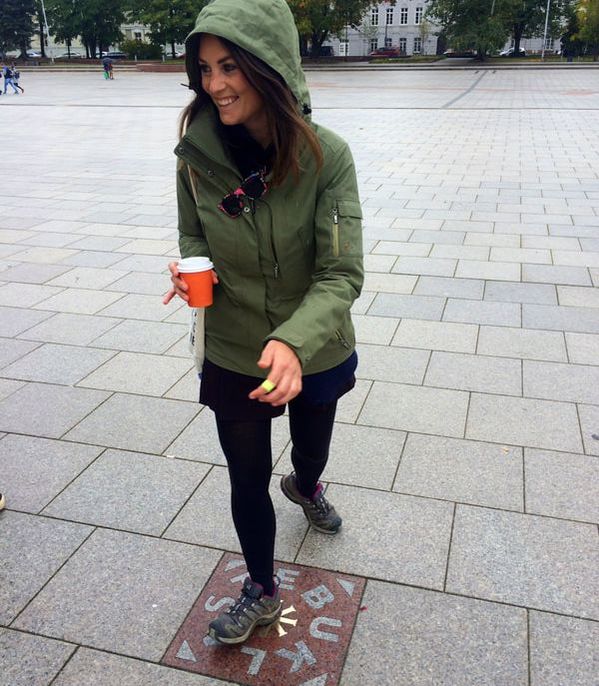 ... We followed the river until we reached the unusual St-Ana Church and Bernardino Park:
​... We visited the Cat Café, as thank heavens that’s a thing:

... We drank LITHUANIAN wine, as apparently, that’s a thing too. And it was certainly more than acceptable (if you ignore the sweet ones). It’s especially useful to flush down the half-meter-high-cakes that are apparently a specialty here.
... And, most impressively, we entered a tiny independent unit within the country: The flower-power Republic of Uzupis that has its own rules and own laws. Wanna hear one of them? During events you don’t need a passport to visit the republic, an honest smile is your only permit of entry. It’s perfect. 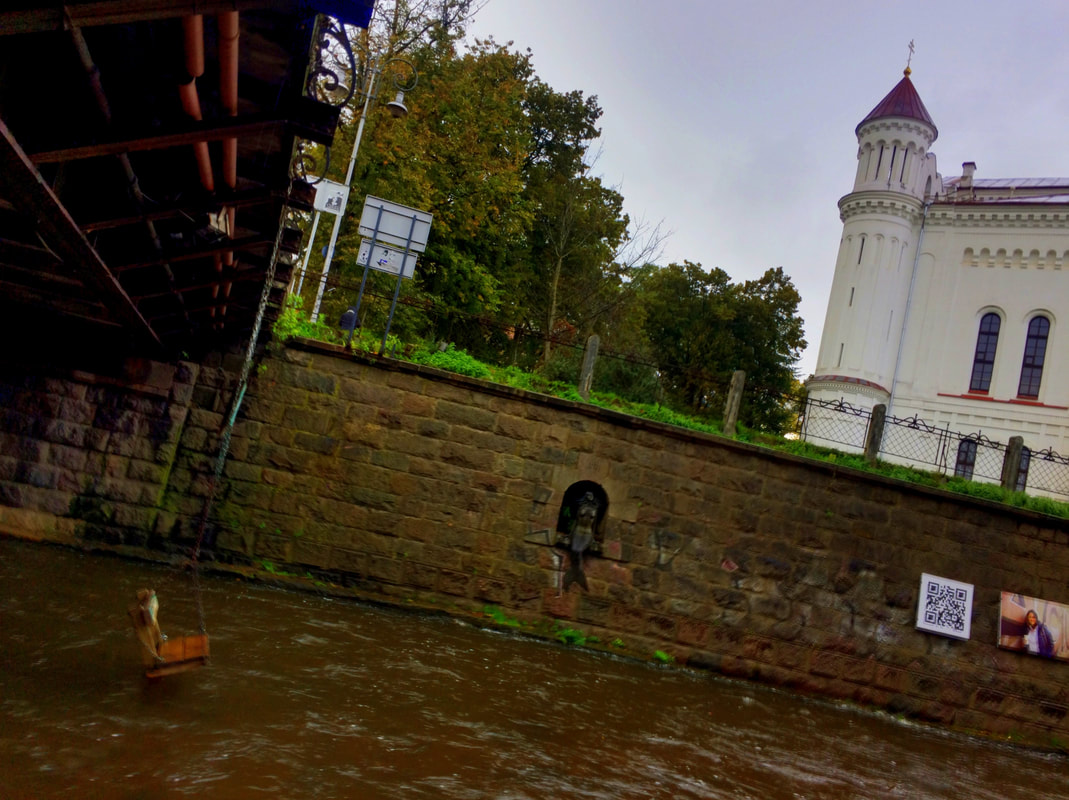 Yes, that's a little swing under the bridge, above the river

​
I knew Lithuania was going to be good after all, you just feel those things sometimes.

I looked out over the millions of city lights forming a twinkling map that was going to come back in future stories to tell.

“Next time I’ll be up here I will have my parachute on”, a voice said next to me. But for now I was just enjoying a sight on the roof of a high building that up until now wasn’t seen by too many eyes, as all the good stuff is forbidden by our governments. Which makes it even better. 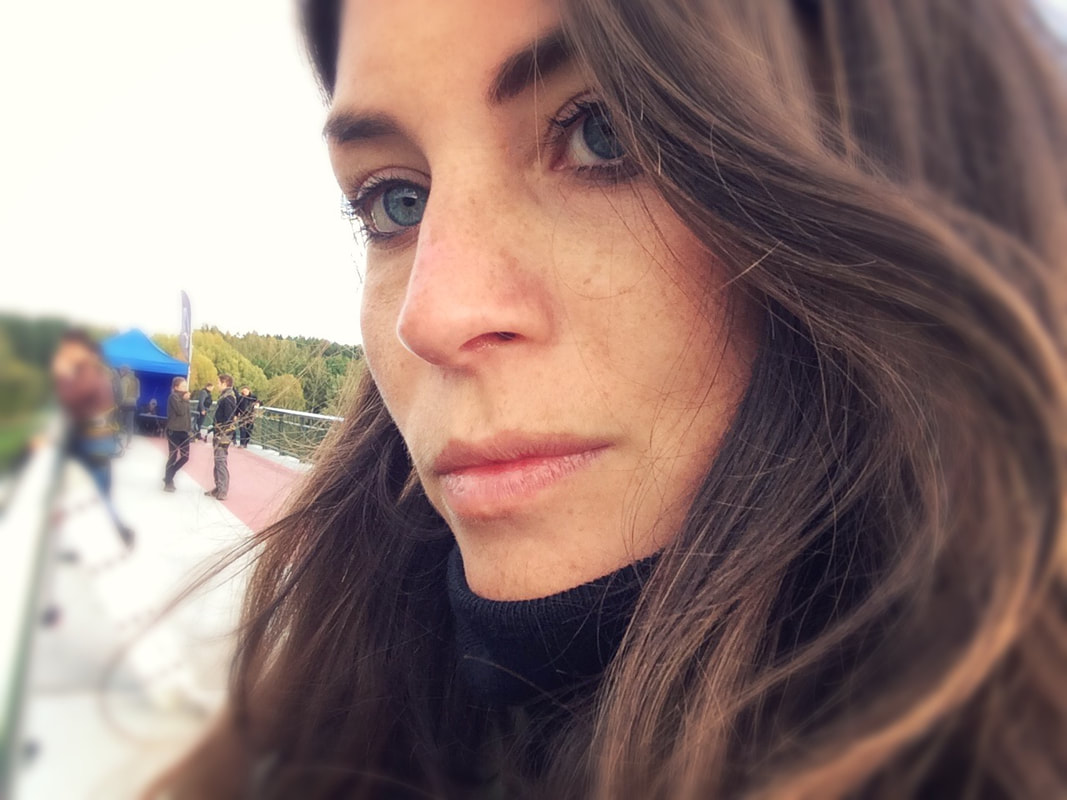 Another perfect way to see the beautiful city of Vilnius is via the Vilnius Free Tour by Vilnius with Locals. They also have a food tour, jewish tour, soviet tour, ghost tour, beer tasting tour & many other unique ways to see the city: Budget Bucket List approves!

In order to support the travelers’ community, I spend many hours per week to adequately document all information and advices for prospective visitors, accompanied by a (hopefully) entertaining insight into my personal observations and experiences. This service is and will remain free. However, if you voluntarily want to make a contribution and support my travels and thus the creation of new stories and information supply, here is the button you’re looking for:
Donate
Related:
​- A perfect wooden cabin in the middle of absolutely nowhere: Aukštaitija National Park, Lithuania
- Where certainly not to go to in Lithuania: Kaunas
​- An independent hippie-republic in the center of Copenhagen [Denmark]: Christiania
​- Discover Romania's enjoyable cities: Bucharest, Brasov and Cluj Napoca
- The 3 golden rules to travel Sofia on a budget! & Why you shouldn’t miss out on Plovdiv! [Bulgaria]
- 8 ways to save money in Vienna, Austria
- The slow charm attack of Serbia’s capital Belgrade​
- Visit Europe's mini-countries: Gibraltar, Liechtenstein, Luxemburg, Kosovo & Wales!
​​​- Guest Blog 'Kosovo Girl Travels': Travel tips and stories from Kosovo's first and only travelblogger!​- Skiing on a budget: Romania's top ski resorts!
- Medieval Holland kept alive: Den Bosch & Haarlem
​- 3 reasons why you need to visit Nijmegen [The Netherlands]
​​- Top-5 places to visit in South Limburg [The Netherlands]
​- Discover more Belgium: Antwerp & the most kick-ass Flanders itinerary!
- A capital surrounded by scenic little villages: Lisbon, Portugal
- Where city and nature meet: Edinburgh, Scotland
- Spanish citytrips: Barcelona, Malaga & Sevilla
​- Europe's best skiing & hiking: Get your ass over to jaw-dropping Switzerland!
​- German gems: Aachen & Frankfurt am Main
​​- Discover the splendours of Turkey: Istanbul on a Budget & Reasons to visit Edirne
​- The capital of adventure sports in Ecuador: Banos
​- Canyoning in Somoto, Nicaragua
​- Paragliding in the Argentinean north: San Miguel de Tucumán
- The Brazilian walhalla of adventure sports: Florianopolis
- The hippie settlement of San Marcos around the Atitlan Lake, Guatemala
- A journey through the mind with ayahuasca [Peru]
​- Wannabe a hippie? Head to Tulum, Mexico
​- Vegan food and tarot-readings in Minca, Colombia
​- Uruguay's hippie beach spots: Cabo Polonio & Barra de Valizas
- Hotspot of the Argentinean (wannabe) bohemians: Purmamarca & Tilcara
​- The smoggy capital of Malaysia: Kuala Lumpur
- Wind and hipsters: Wellington, New Zealand
- Getting comfy in the Korean big smokes: Busan and Seoul
​- Read about Bosnia & Herzegovina: Mostar, Blagaj, Trebinje, Sarajevo, Jajce, Banja Luka and Sutjeska National Park (incl. Maglic Peak - the country's highest!)