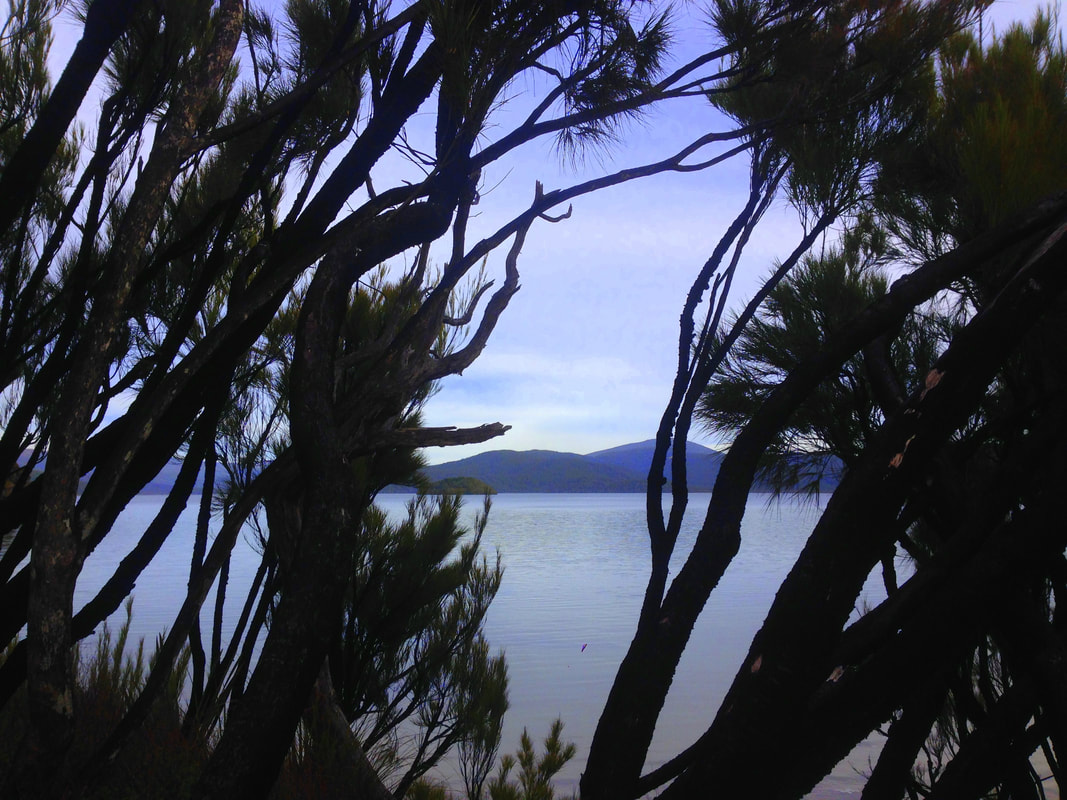 It was never a question if I would go there, just a matter of when.

Stewart Island is one of the three main islands of New Zealand, but yet almost entirely forgotten by the lion share of the general backpackers crowd. For incomprehensible reasons, as nowhere else in the entire country stayed New Zealand this true to its roots.
​
“Whereas large areas of the North and South Islands of New Zealand have had their basic nature altered almost beyond recognition, the opposite is true for Stewart Island, where the natural patterns remain substantially unmodified. A natural wilderness, a remnant of old New Zealand, from wild coasts to scrub-barred tops. [...] It could be said that this is what New Zealand looked like before cities and large towns came along – its natural heritage dominates, on land and in the surrounding sea.” – Neville Peat, Rakiura Guide 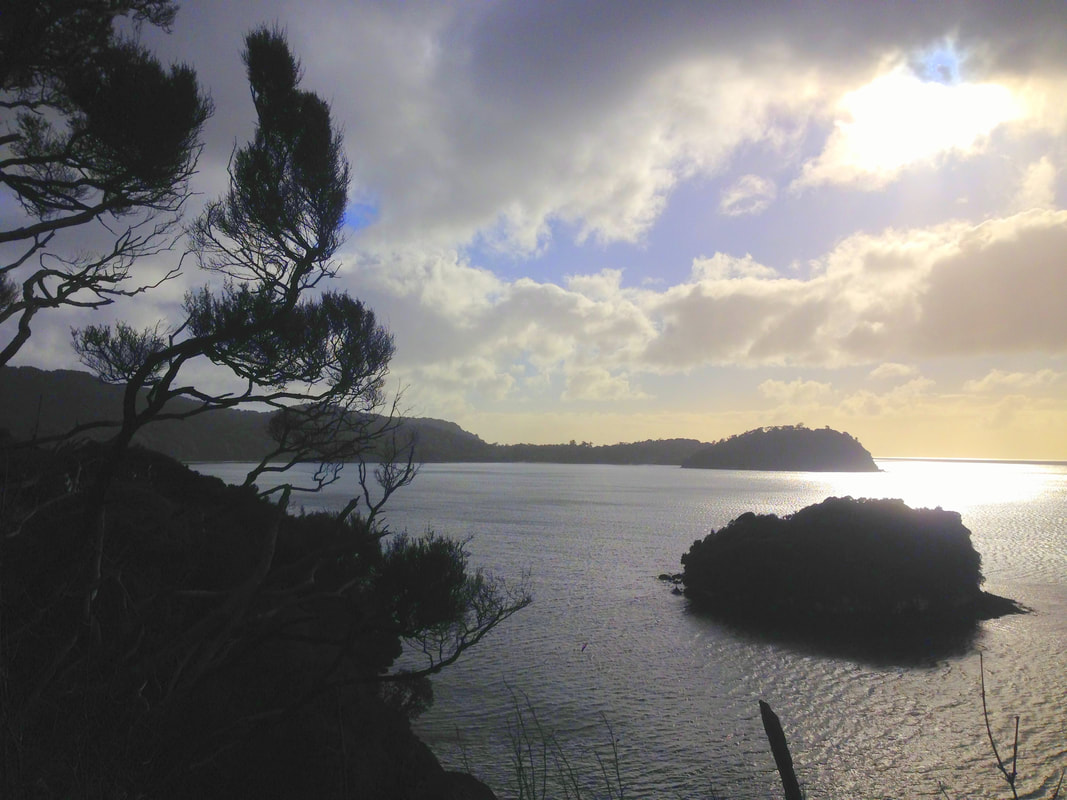 It’s therefore rather odd that the name refers to the rather fresh European settler’s history related to William Stewart, the first officer of the Pegasus ship that moored at its shore in 1809 during a sealing expedition that originated in Australia (although the island was sighted by James Cook in 1770, who assumed it was merely the southern tip of South island). No, better to refer to it by the Māori name, Rakiura, which can be freely translated as “the glowing skies”...  the southern lights (aurora australis) that can be sighted at the island on lucky days. 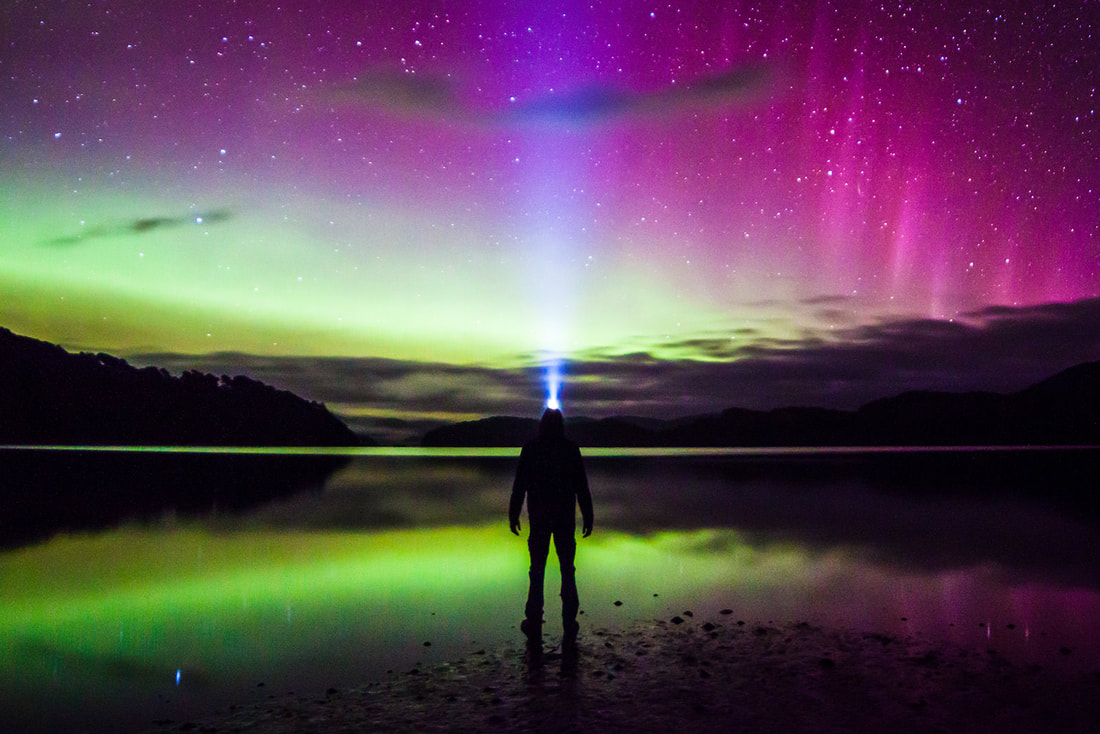 I don’t think you need any more convincing, but I’ll give you another one anyway: Kiwis! Hundreds of ‘em! Yes, you read that right. You don’t have to visit one of those pathetic zoo-structures keeping these endangered flightless birds in captivity just so we can have a look at them for our own amusement... here you can spot them in the wild, in their own natural habitat.

On Stewart Island the famous kiwi birds outnumber humans by 50 to 1.

What a place!
This enthusiasm didn’t yet surface on my way over there, crossing the Faveaux Strait. You see, I had spent the previous night in Invercargill. A hardly inspiring township to most, but I had dinner, wine and a Couchsurfer waiting for me. And a party, one hell of a party. So much of a party that I could almost continue to the harbour straight out of the pub. That’s bad news when the sea is rough.

[A total déjà vu with my last ferry trip, when I had run into a Mexican with his bottle of tequila the night before... for some reason I can only do boat crossings in between the kiwi land borders entirely wasted, I gotta break that habit. Hangovers and boat trips don’t make a lovely pair.]
​
My first day in the only town on the island, Oban, wasn’t therefore a very productive one, but I needed to gain strengths for the days to come. You see, the island has no more than 30km of roads. Therefore, the only way to properly explore Rakiura is by foot, which is great news for hiking enthusiast like me. 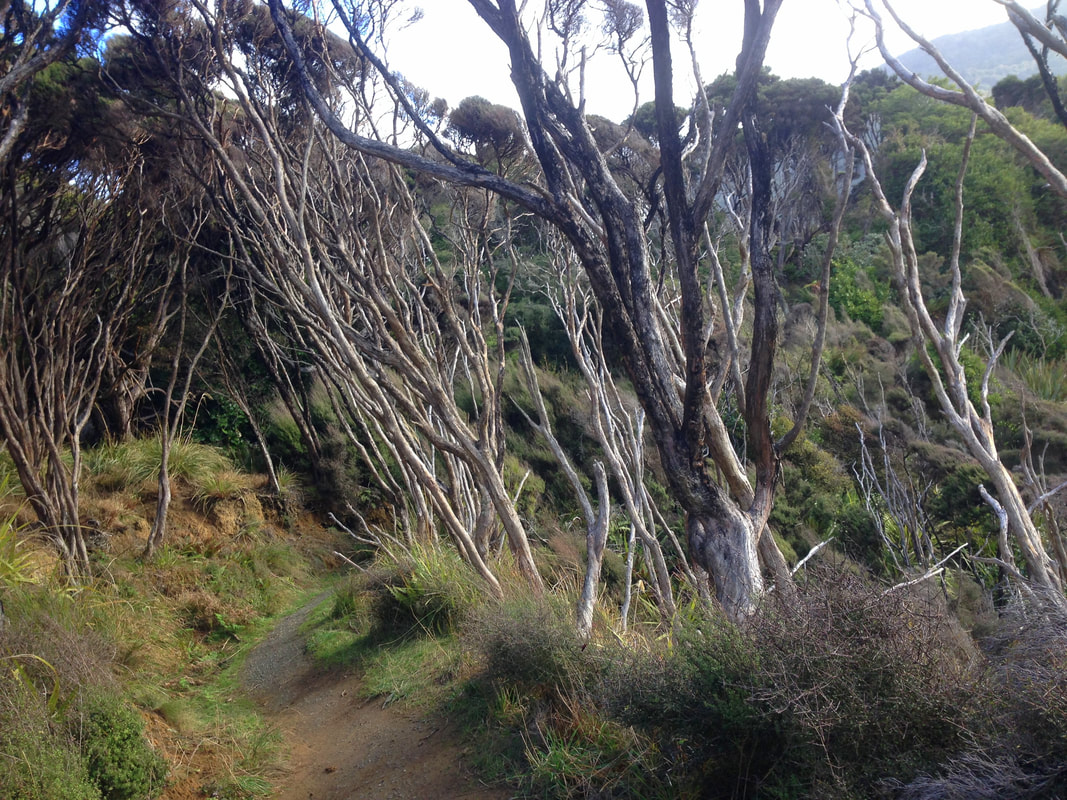 You have three options:


The numbering orders my preference, but due to time restraints I had to commit to the third one. One of the heavily marketed “New Zealand Great Walks”*, making the country’s most defining natural treasures accessible for all age groups and levels of fitness. Therefore, “intermediate” can be replaced with “easy – so fucking easy”. I really don’t know why I followed up the three-day advice, as I timed it and I could have literally walked it in a day. That said, the track was heart-warmingly scenic and I had one hell of a time thriving in these excellent huts the DOC provides, smack-bam in the middle of nature – for sure a better alternative than spending days in a row in Oban.

* I did (parts of) the Tongariro Crossing, Abel Tasman Coast Track and Paparoa Track before.
Day 1

Did I tell you the entire track was easy, well then the first day is a shiny signboard of that. Four hours said the flyer. I think if I say it was half that time I’m exaggerating, it was even less... However, the trip from Lee Bay to the Port William Hut is a spectacular opening. With every step being treated on a new angle of this overwhelming coastal view you follow the path to Little River, where you have both a low- and high tide trail. In summer it’s an interesting spot to camp, but now in the cold winter breeze I continued my journey over Māori Beach. A wee while later (to keep it in southern tongue) you’ll arrive at the campsites overlooking Magnetic Beach, the Port William Hut being a short stroll down the path.
I spent the rest of the day reading and building fires, and the rest of the dark winter evening looking for kiwis. I heard them calling, but rats were the only animals my eyes were granted to see (camping alert – hang your food in a tree!). And a magnificent skyscape, in the land where no artificial lights are near... I spent an hour lying in the freezing grass watching the shooting stars flying through the milky way that stretched out like a nocturnal rainbow. Life can be generous sometimes.

I might be on a hiking trip, but I won’t ever betray my slow mornings. They’re part of my identity. At midday I left, three propane-prepared coffees later. According to the DOC-time-estimation of six hours I should arrive after dark then, but nothing was further from the truth. For three hours I climbed through the bush, slipping over the muddy trails that seem to be a constant factor on Stewart Island’s trails. 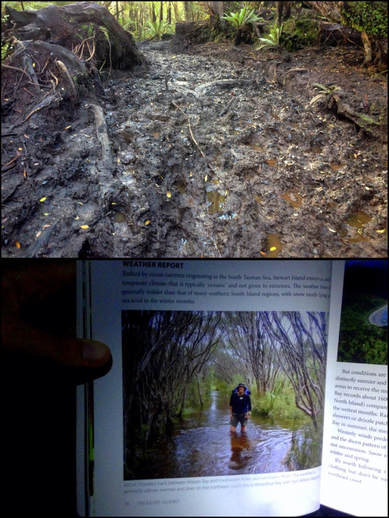 Luckily it wasn’t as bad as I was warned for in the tramping guides!
Views were absent this day, besides an ongoing sequence of trees. The trail leading you from Port William Hut to the North Arm Hut stretches out from coast to coast, zigzagging straight through the Rakiura inland. A wide variety of birds will pass your vision, from robins (toutouwais) to saddlebacks and yellow-breasted tomtits... Stewart Island has over a hundred bird species for us to discover!
So many birds, but still no kiwis! I heard them all around me that night, but they were unspottable. I almost started to believe they’re some magical creatures only appearing to those who are worthy!

The last day of the trail already! I slept like an angel, from top to toe wrapped in a fluorescent sleeping bag, the pastel-colored North Arm bay glooming in the late morning sun being the first thing I saw when opening my eyes. Three days in a row without a single drop of rain: not bad in a place that generally has 219 rainy days a year! Today I had only 13km to go, kicking off with a scenic coastal trail swirling down to Sawdust Bay, the focal point of the early 19th century timber industry. I ate my lunch next to the remains of a sawmill and continued trough Rimu and Kamahi dominated forest cropping up at the sheltered bays of Kidney Fern Arm and Kaipipi Bay, a little side track from the main route.
This magnificent track ended way too early, four hours less than promised that day, so I opted for an alternate finish via the relatively short Ryan’s Creek Track. Irony has it that this part was more challenging than the entire Rakiura Trail, with stronger elevations and uneven paths. This detour is strongly recommended, also for the travellers skipping on the big trails: it’s only a stone’s throw away from Oban! 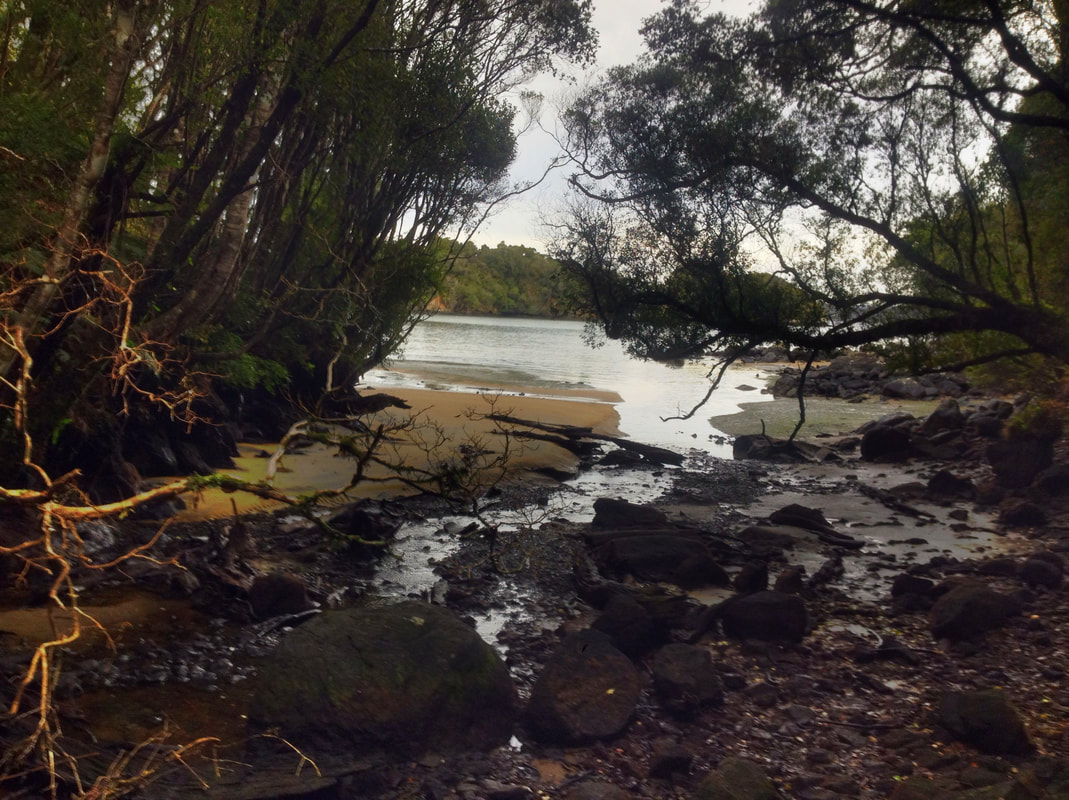 Another (short) day hike I did and like to put forward:
​
Ackers Point: Short stroll up to the lighthouse where you’ll be granted with satisfying views. Just before sunset you can witness penguins heading ashore. 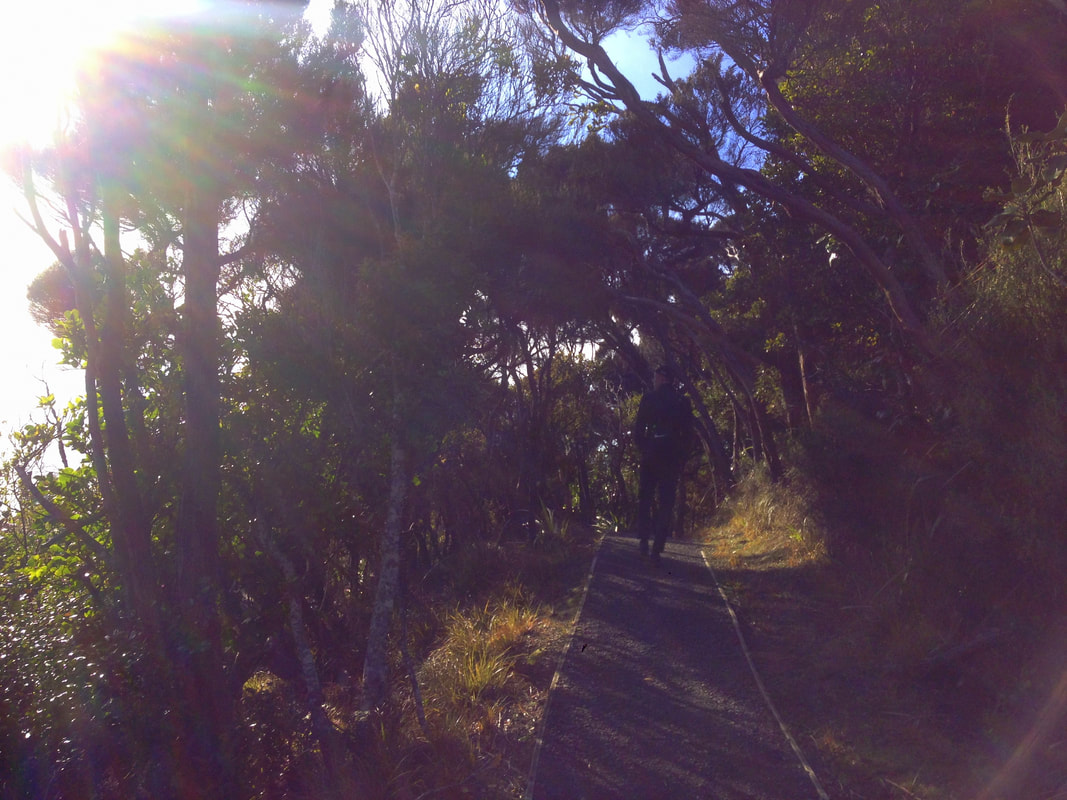 Ulva Island
​
Talking about recommendations... don’t even think on skipping on Ulva Island, a short boat ride away from Golden Bay. Stewart Island has approximately 170 satellite island and islets, what’s so special about this one? Well, first of all: It’s designed as a sanctuary, predators having been eliminated to let its original wildlife prosper and expand. When following the carefully laid out trails you can witness what New Zealand would have looked like without pests, without introduced animals (clearly the ‘pest’ in this context is the human race). ​
I checked quite some animals off the wildlife-list that day: Penguins, wekas, kākās, albatrosses and last but not least... dolphins! A bay full of them, cheerfully jumping behind the water taxi!

Yes, you’re going.
Talking about wildlife... the big question remains. Did I or did I not spot a kiwi?
​
Yes sir, yes I did. (I’m pretending to be cool about it now, but in real life I entirely lost my shit in an outpour of pure ecstasy.) It required some nights roaming the forests and rugby fields with a red-light torch (they’re very shy and scared off by bright lights), but I did check this one off the NZ Budget Bucket List! 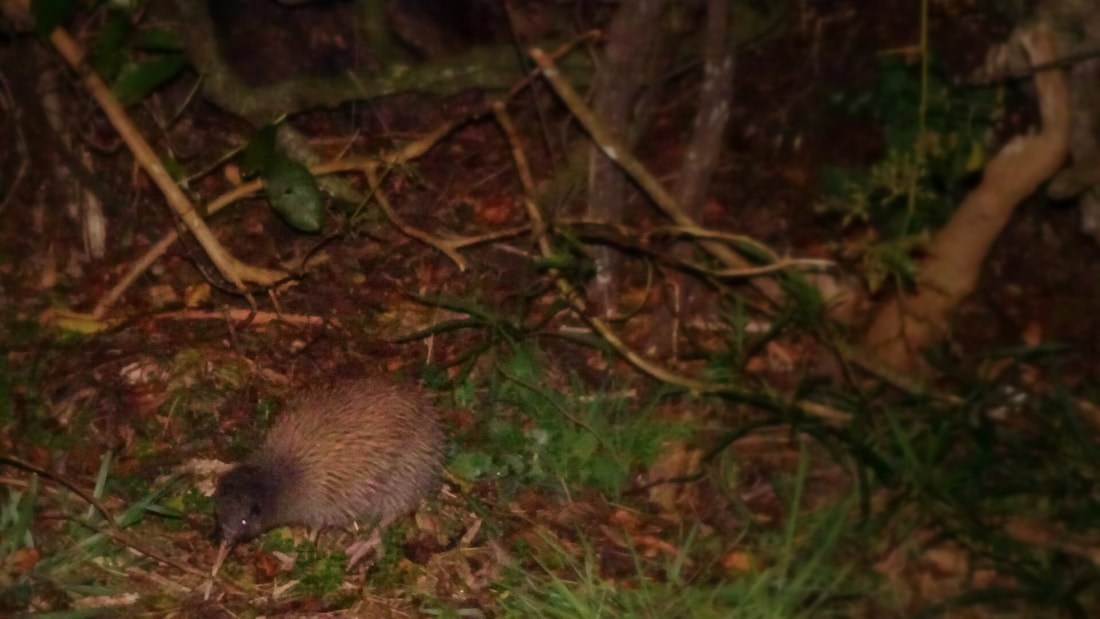 Tip: Study the kiwi-call and visit the rugby field at night, hold very still and focus on rustling in the bushes.

​
Stewart Island. Rakiura. One of the indisputable highlights of New Zealand.

You must be a fool to miss out on the purest experience of the mighty Aotearoa, a glimpse in the past and a reassuring look at a present where it’s still kept intact.
Wildlife photos made by my fellow traveller Sander Giesselink
In order to support the travelers’ community, I spend many hours per week to adequately document all information and advices for prospective visitors, accompanied by a (hopefully) entertaining insight into my personal observations and experiences. This service is and will remain free. However, if you voluntarily want to make a contribution and support my travels and thus the creation of new stories and information supply, here is the button you’re looking for:
Donate
Related:
- Discover the magic of New Zealand's North Island: Auckland & its islands, Matamata (Hobbiton), Northland, Port Waikato, Rotorua, Taupo & the Tongariro Crossing, Waitakere Ranges and Wellington
​​- Travel New Zealand's South Island: Nelson and its Abel Tasman NP, Arthur's Pass, Punakaiki (Paparoa NP) & Hokitika, Queenstown, Arrowtown, Cromwell, Christchurch, the South East Coast, the Fox and Franz Josef Glaciers, Kinloch, Glenorchy, Te Anau, Milford Sound and Wanaka
- The horror of obtaining a New Zealand visa in Brazil
- Pacific-island-hopping: Samoa & Fiji!
​- Hike the best national parks of South Korea: Jirisan NP, Hallasan NP, Hallyeohaesan NP, Taebaeksan NP, Seoraksan NP and Odaesan NP
- Spotting penguins and seals at Pensinsula Valdes, Argentina
- Malaysia's hottest hiking spots: visit Taman Negara, Cameron Highlands, Penang, Miri and Kuching!​
- Serbia at its greenest: hiking Pirot!
​- Check out Budget Bucket List's FAVORITE HIKING DESTINATIONS worldwide!
​- Hiking Poland's longest mountain trail (550km) with a tent: Glowny Szlak Beskidzki - check the reports here!
- Walk like a pilgrim! 6 weeks on the Camino Frances towards Santiago de Compostela / Finisterre (900km) - check the reports here!