Download File
“San Jose is often disregarded as a touristic destination, disdained as 'just another big city'. Indeed, it is a metropolis of considerable size, which like all other capitals in the world has to deal with pollution, gigantic buildings and traffic jams. However, Costa Rica’s biggest city can also be considered as the national centre of Tica culture, art, theatre, the country’s main museums and finest restaurants, as well as the epicentre of a lively and vibrant nightlife. Therefore, San Jose offers a refreshing contrast with Costa Rica’s colourful countryside and coastline and is not to be missed during your travels”, I wrote for the website of Monkey’s Tribe Hostel that I helped to build.

​Of course, I had to sell it a little bit. Truthfully, San Jose for sure didn’t blow me off my feet. They say if you see one city you saw all of them, which I personally strongly reject: I saw a couple of hundred cities worldwide and every single one has its specific charm... San Jose’s charm being one of the ugliest, most polluted cities I have ever seen. Did I dislike it? No, of course not. Being able to have a marvellous time at any place on our planet is an art I’d like to practice. 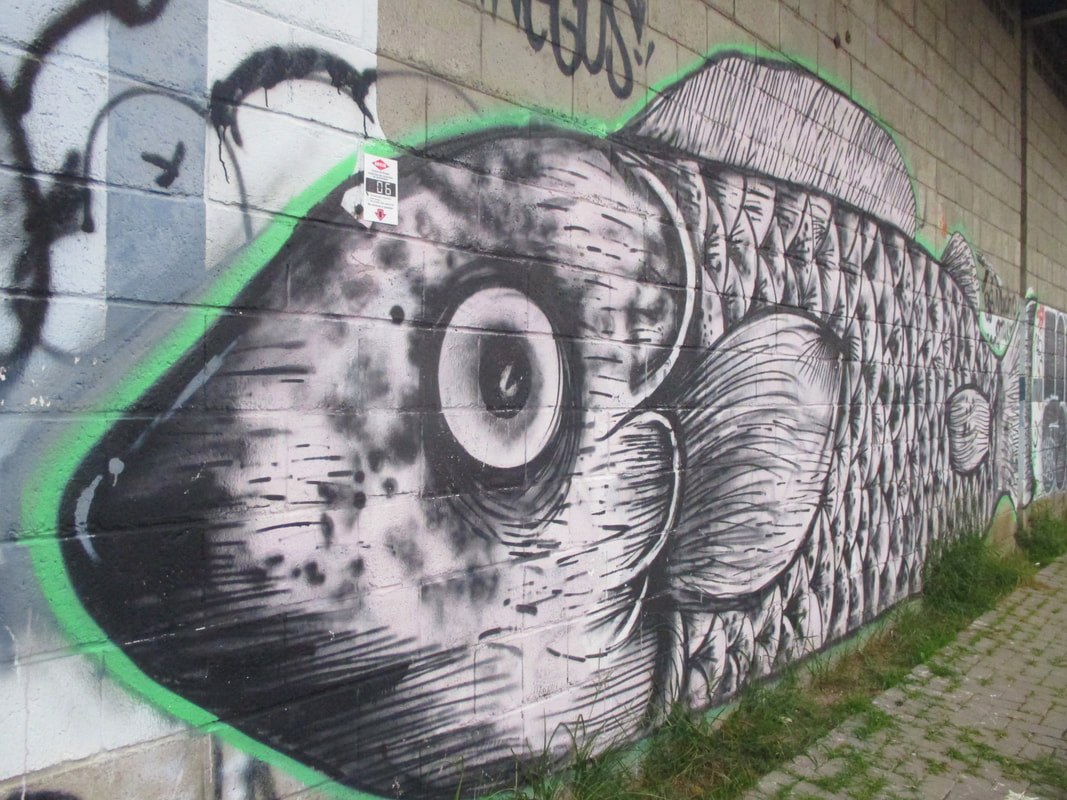 So instead of dismissing San Jose on my never-ending travels, I decided to look beyond the grey curtain of smog and depressing rainclouds and see what art and cultural treasures I might stumble upon. I took my time too, 3,5 weeks to be exact. The first cache revealed itself quite quickly: The locals, the self-named ‘Tico’ people, are world class. Not only did the esthetical value of the women steeply rise the second we crossed the Panamanian border, the open-heartedness and hospitality is truly overwhelming. From the 90’s-porn-approved handle-bar-moustached man that checked me in at some 3d-class motel room on my first Costa Rican night (the toilet was located right next to the bed), to Couchsurfer Gerardo who opened the doors of his house for me the next day... all of them made us feel welcome and appreciated.

To proof the beauty of this culture: Every sentence is concluded with "Mae, pura vida". The national slogan, 'pure life', merely reflects the soul of this nation.
​As my love for travelling is bigger than my financial resources, I needed to find a way to survive in the most expensive Central American country without going bankrupt. The horror stories I heard from fellow travellers before my arrival seemed to be correct indeed: The outrageous prices almost double or triple the prices in Europe (!), while the minimum wage is about four times as low. Better safe than sorry I stocked up on non-rotting food just before the border, in the village of Changuinola: kilos of rice, 8 bags of lentils, 2 bags of flour, 4 bags of oats, 1kg spaghetti, ketchup, noodles, crackers and some canned veggies. Even though I might get a hernia, starvation is out of the question! 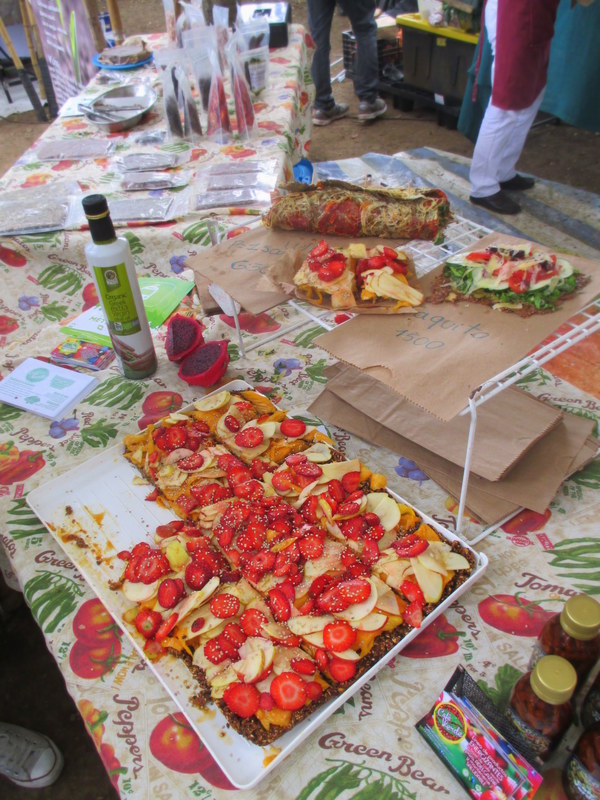 ​So, the food issue was solved, what to do with accommodation? During the tiny week I slept at Gerardo’s couch I had the time to visit two hostels where I was in touch with via Couchsurfing and Work Away: Aldea & Monkey’s Tribe. The first one was right in the centre, a gorgeous colonial building, neat and clean and every detail strictly organized.

In the second one artwork decorated every wall, bohemian new-age hippies and juggling flower-children hang around in the marihuana mist, and the amazingly crazy owner Hazel welcomed us with some rum-cocktail at 11AM. Yup, I committed to the last one.
There was no working schedule, ‘freedom’ is the magic word and art the language. “Within the walls of Monkey’s Tribe Hostel social differences disappear and cultural backgrounds blend. No matter your age, skin colour, nationality, profession, sexual preference or life values, you will be welcomed here as family." [Van Hoeijen, 2015]. So I moved into my own private room (usually $30 a night), enjoyed free communal meals every now and then and started working on a new website whenever I felt like it. I didn’t enjoy, but nevertheless accepted, my new pets (Family Mouse, feasting on my provisions), the messy kitchen with only one ‘gas’ ring working, loud music starting at 7AM and parties finishing at about the same time (yes, I grew up in the meantime)... but well, that’s life. Pura vida.
​This non-schedule allowed me to do what I couldn’t do in the previous three months in rural villages and rainforest: museum-hopping, sightseeing and sucking up some culture. So I did it all. Churches you say? Catedral Metropolitana & Iglesia La Merced, check-check. 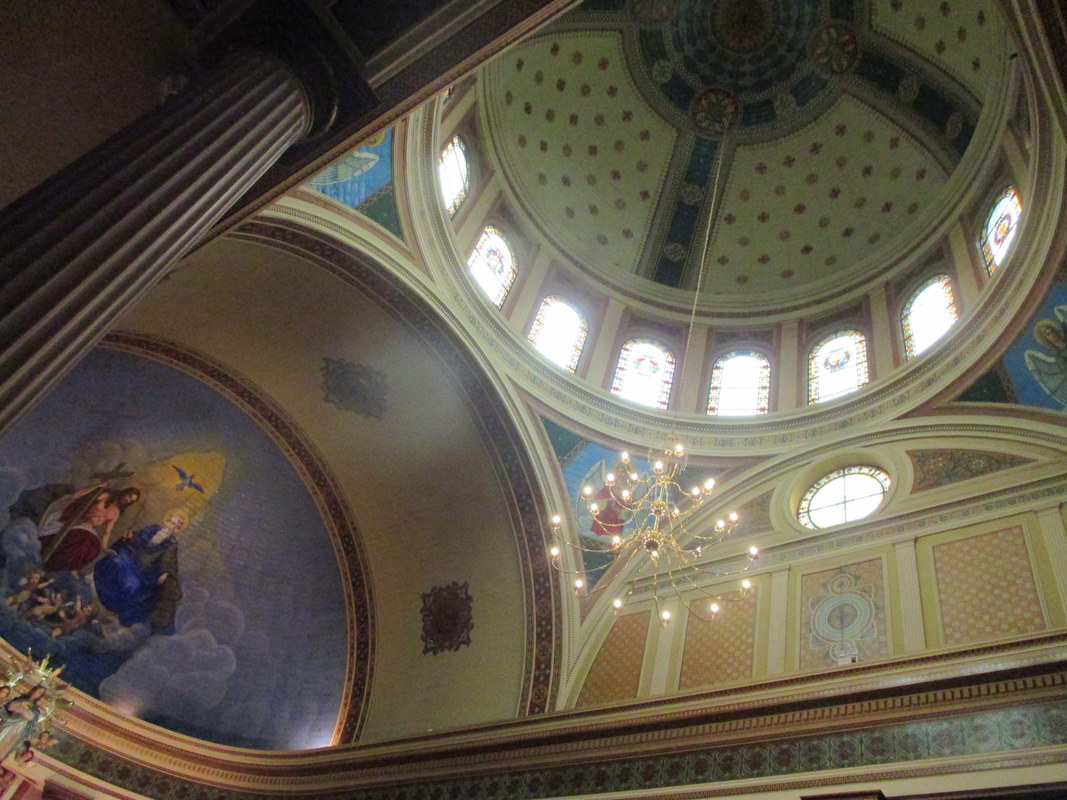 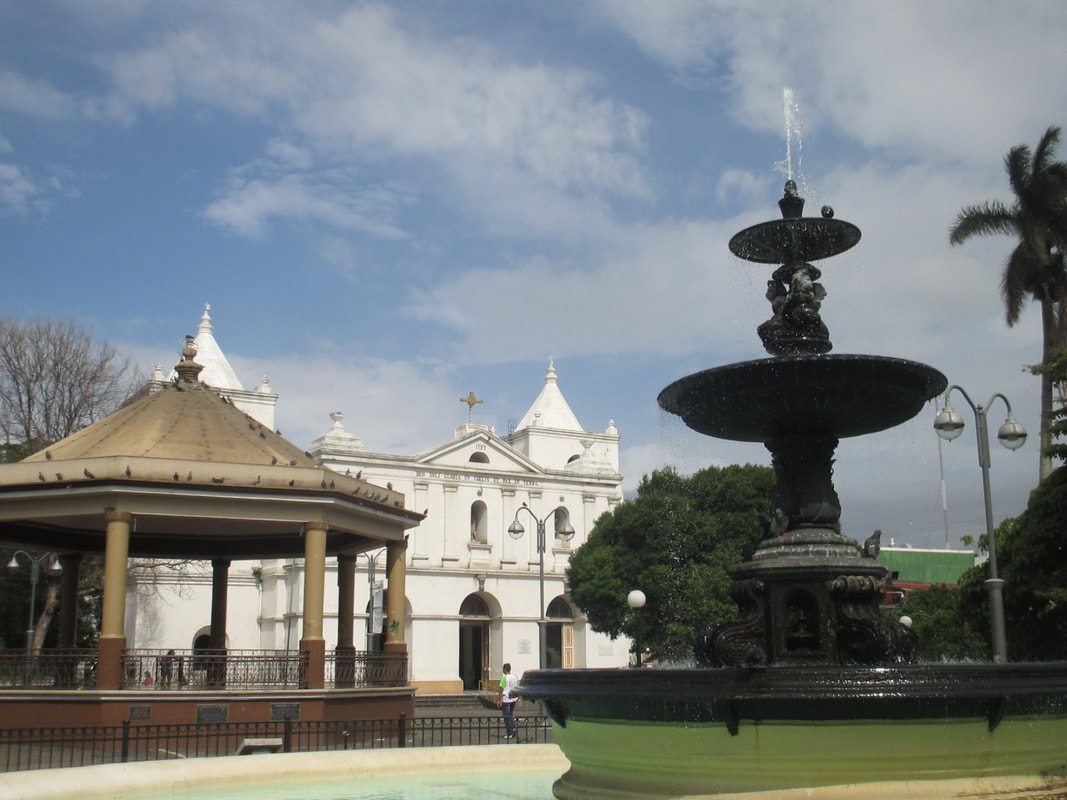 ​Museums then? Art in Museo de Arte Costaricense, Museo de Arte Diseño Contemperáneo, Galeria Nacional and TEOR/éTica and why not, some history in Museo Nacional, check-check-check-check-check.
I roamed through the Mercado Central, visited the Universidad de Costa Rica, wandered through China Town, looked up temporary exhibitions and kept an eye on the theatre programme. The evenings I filled with free movies displayed in Centro Cine, horizontally positioned on a fatboy. Alternatively I went out with musician Gerardo, who took me to El Sótano (the basement) to check out some jam sessions with local phenomenon ‘Latin Hendrix' (yes, really).
​And... I even found a way to make some money, in order to leave expensive Costa Rica with a steadier cash flow than we entered it. As always, when you least expect it some opportunity blows your way without any prior effort. Via Couchsurfing I got in touch with the half-Belgian half-Tico Ronnie who randomly noticed I speak a bunch of languages. He was just in the making of a new weekly language-exchange and was looking for a polyglot to host the event. And so it went: Every Wednesday we helped out with the language exchange and every Saturday with an international party, not only being able to drink for free ($5 per wine here), but also getting 10% of the profit (at least, that was the promise... Ronnie still owes me money). For the cause I even got interviewed by a national sensation-sensitive newspaper... after appearing in several Dutch newspapers, five different magazines, in  the national news, in two TV-programmes, a videoclip, in a McDonalds commercial, in the background of a movie, on the German news (shot in Italy), on a Korean travel programme (shot in Vietnam), I can now also add Costa Rican media to the list: tadadaaaaa! 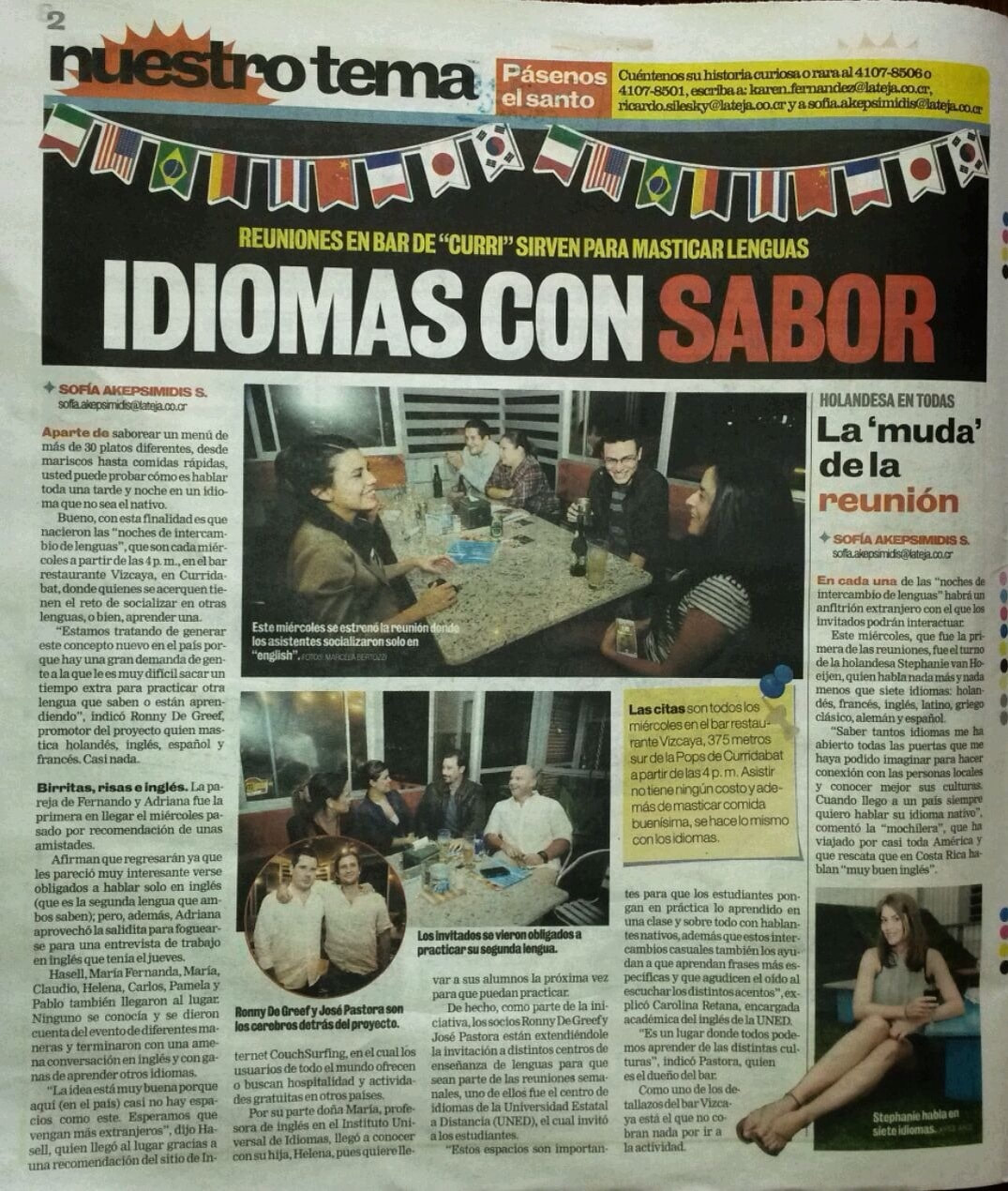 Nevertheless, at some point my internal alarm went off: Time to go! There are always more places under the horizon! To finish my San Jose era in style Hazel’s dad Raúl took me out on a gorgeous hike from Santa Cruz to Santa Rosa, right across the waterfalls Cataratas de Aquiares (say that 20 times in a row, cataratas).
And like they knew this was exactly what I needed, a metal band screamed the last night away... ​ 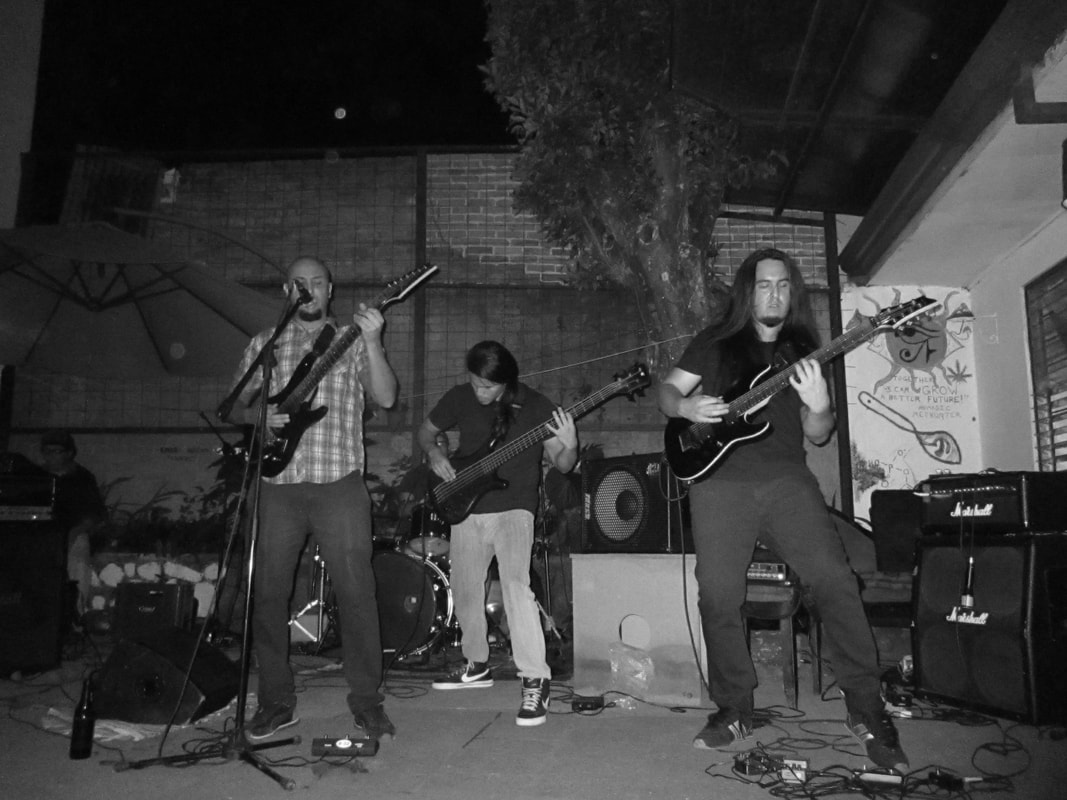 ​With zooming ears I loaded everything I own on my back again and silently left the tribe. Silent, as I hate moments of goodbye. Goodbye is an illusion, as the ones you didn’t care about are just shadows in your conscience daily life so you don’t even notice them leaving, and the ones meant to be will never leave your mind.
In order to support the travelers’ community, I spend many hours per week to adequately document all information and advices for prospective visitors, accompanied by a (hopefully) entertaining insight into my personal observations and experiences. This service is and will remain free. However, if you voluntarily want to make a contribution and support my travels and thus the creation of new stories and information supply, here is the button you’re looking for:
Donate
Related:​
- The green treasures of Costa Rica: Monteverde & Tortuguero National Park
​- Costa Rican beach life: Nicoya & The Coast
​- Hiking adventures and a haunted house: Paso Ancho, Costa Rica
​- Other capital cities in Central America: Panama City, Belmopan, San Salvador, Managua
- Dangerous or incredible? San Salvador, El Salvador
- Slowly falling in love with Quetzaltenango, Guatemala
​- City treasures under a curtain of smog: Mexico City
- Yay or nay? Panama City...
- City madness in Sao Paulo, Brazil
- Getting comfy in the Korean big smokes: Busan and Seoul
- Other places where I (shortly) lived: Buenos Aires [Argentina], Florianopolis [Brazil], Medellín [Colombia], ​Haarlem [The Netherlands], Roatán [Honduras], Granada [Nicaragua], Boquete & Isla San Cristobal [Panama], Port Waikato [New Zealand]
​- The smoggy capital of Malaysia: Kuala Lumpur
​- 8 ways to save money in Vienna, Austria