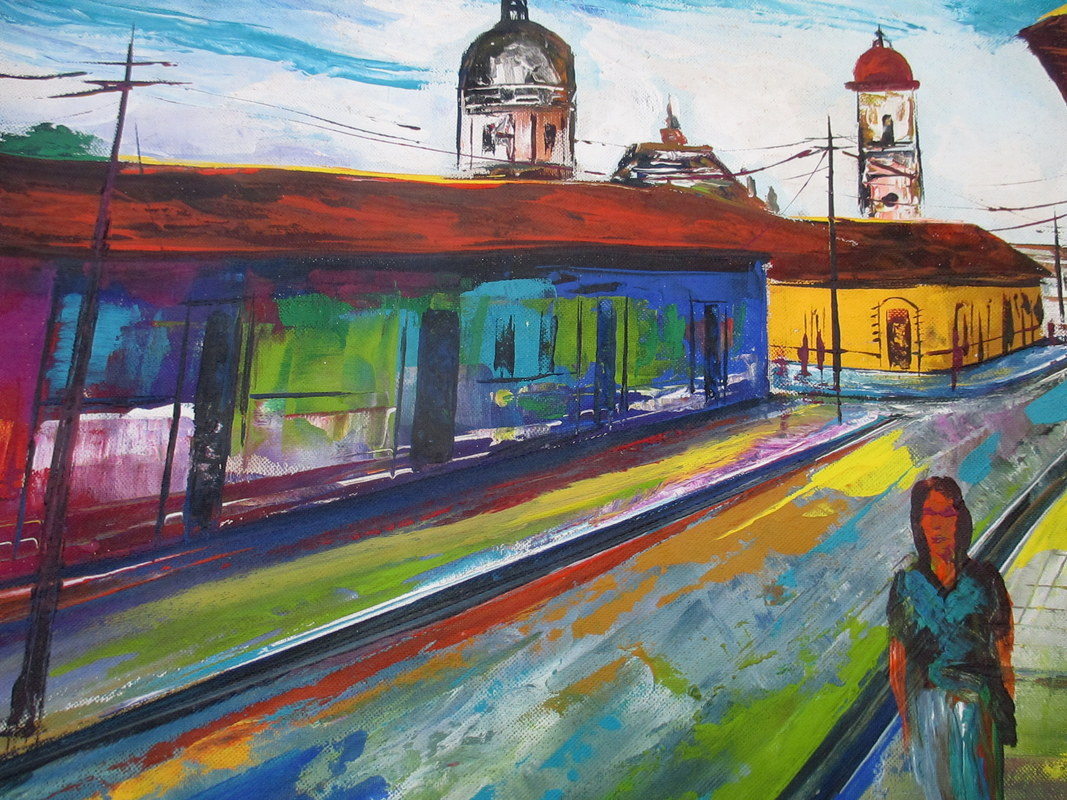 I was super excited when heading to Granada for the first time, as that was my last stop before picking up my mother from the airport... one of the most important persons in my life who I didn´t see for an entire year. I had about 2,5 weeks to kill in which I tried not to see or visit anything (as I saved that for when my mom would be here), so I decided to fill it up with some volunteer work.

I did some Central American volunteer projects before and developed a tradition of ending up with an impressive series of unconventional hosts: first an alcoholic, cheating, I’ll-do-everything-with-a-heartbeat hostel owner who had the superb talent of turning everything he touched into a failing misery (oh, and who still owes me a 100 bucks: stealing from volunteers, classy. Ryan Brandt, trash the name)... Then the friendly, generous owner of an eco-retreat on a tropical Panamanian island, who nevertheless had an emotionally misbalanced girlfriend who on a weekly basis quite punctually caused a local earthquake of screams, cries, accusations, death wishes and laptops being thrown in the water... Then the warm-hearted owner of a hippie-flower-children-hostel who usually started infiltrating her mind with a mix of booze and marihuana before the clock indicated noon.

But all of that is some mellow mockery compared to what lunatic I ended up with in Granada. 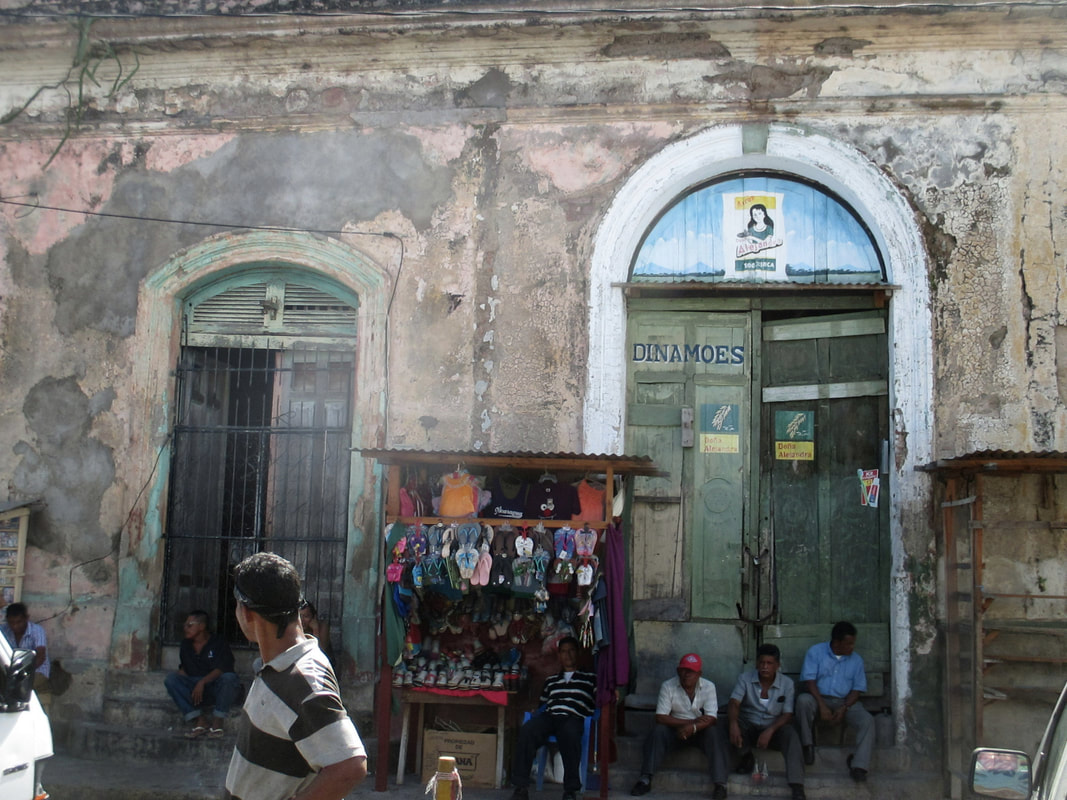 But before all the craziness took off I had 1,5 days to fill in this beautiful gem of a town, as I arrived a bit earlier. Trying to ignore the energy-draining heat, I leisurely strolled around the historical colonial centre full of colourful villas, hustle-bustle parks and long avenues, hearing people speaking Dutch, French or English at every corner of the street. I for sure wasn’t the first foreigner of this kind, as some centuries ago our ancestors from these mentioned countries arrived in their pirate boats to plunder and murder. The rich history of my beloved Europe!
​I slowly toddled to the Cocibolca Lake, Central America’s biggest. Not to swim, as this is the world’s only fresh water lake inhabited by sharks, but to admire the sights before China starts building the second canal here and will disturb all eco-systems. The sights didn’t blow me off my feet: enough plastic to keep one McDonalds going for an entire month dotted the shore. The specially designated ‘tourist zone’ didn’t provide a space for some cute family picnics, but rather for teenagers injecting and sniffing liquids and powders of a questionable kind. The former restaurants were now inhabited by the poor and homeless and the stench of urine infiltrated the sidewalks. Not sure what happened there, but it’s alright to scrape it off your ‘beautiful Granada get-away’. I gladly returned to the center, where the true attraction of this nevertheless magnificent, charming city lies. 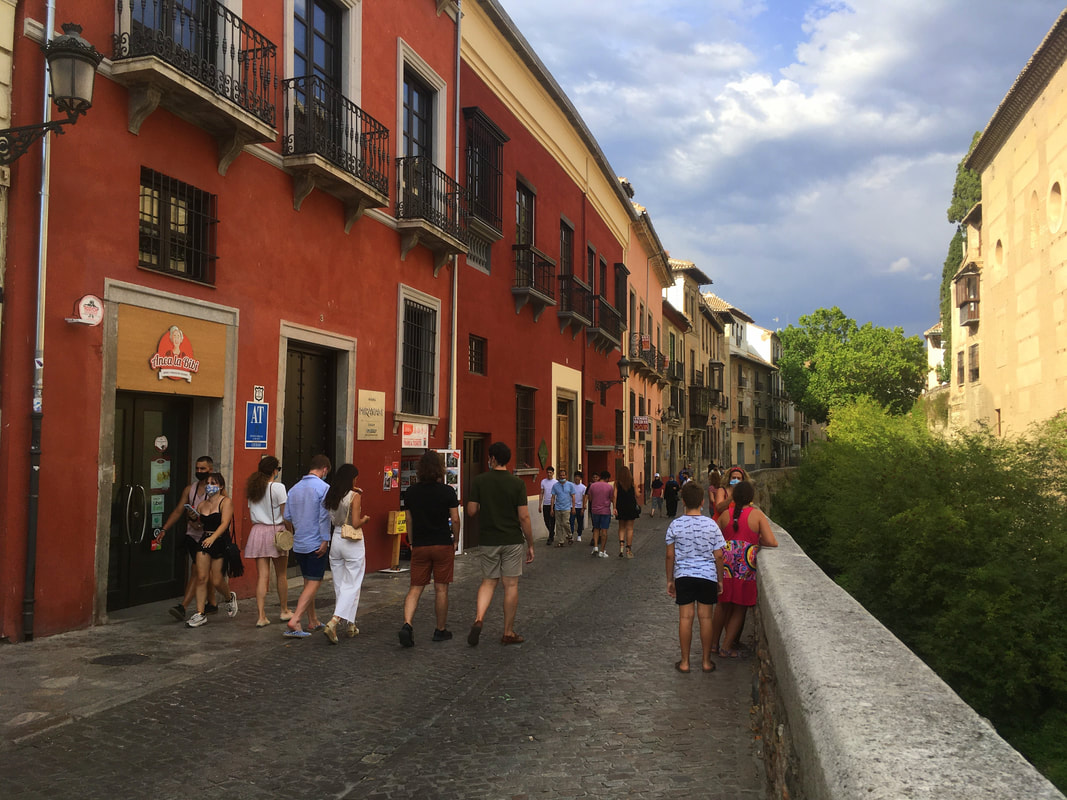 That night I met up with my host. Now I do know that everything I write and wrote is and will be read by this person, and in spite of everything that happened I don’t think this is a bad or malevolent woman as she truly believes the figments that somehow infiltrated her brain. Therefore I will not mention name, location or any specific personal descriptions, but just use the rather uninspired pseudonym ‘X’... as I do see everything that comes to me in life as an inspiring, eye-opening or reality-confronting story I feel entitled to write about. I am a free human-being after all, or at least as free as my mind allows me to be in a world of unseen control and attempts of brainwashing, to give some credit to X’s paranoid ideas of the world surrounding us. And these ideas flow without boundaries, continuously and unable to stop for one single second, as the moment X opened her mouth the unfortunate listener would be held hostage with her stories for hours until some lucky opportunity to escape would present itself.

In my time here I constructed an imaginary helmet to protect my brain from the negativity flowing out of her mouth, the stories just ricocheting off. My ears caught the words, but I wouldn’t allow any speculation to infiltrate my intellect. A little selection of statements that echoed through the building where she kept me locked inside of most of the times (yes, really)... imagine every statement a two-hour narrative repeated a few times a day:
​ 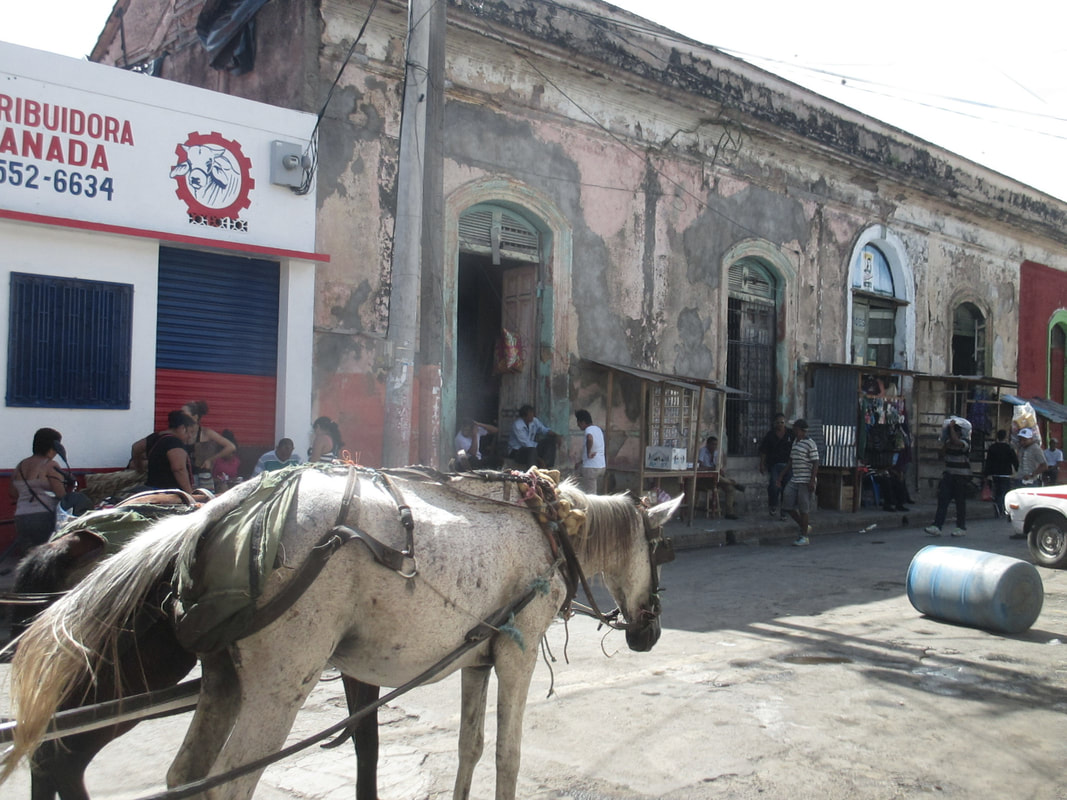 ​​
Laptop cameras were taped off... mind the electricity plugs, they might have electronic listening devices. Describing herself as a selfless humanitarian out there to help the poor, the animals (except the ones in her stomach and the horses) and making the world a more bright, positive place where there’s no place for darkness or negativity, these statements sound quite odd right? Truthfully, I think this person is so brainwashed and traumatized by the dark side of life which she so sensitively keeps on picking up on, that in her attempt to deny this negativity she can’t help but continuously spreading it. It slowly made her mentally ill and caused her to slowly lose all sense of reality.  Although I do pity that situation and respect her as a fellow human-being, this non-stop paranoid negativism drains a lot of energy. Add up that a significant part of personal freedom was taken away as she refused to give anyone a key (we, irresponsible sheep, would get raped in the house if she did, she was sure of it) and would simply lock everyone up in the house when she slept until 1PM or went out herself.

I couldn’t stay her any longer, it wasn’t a sane situation. 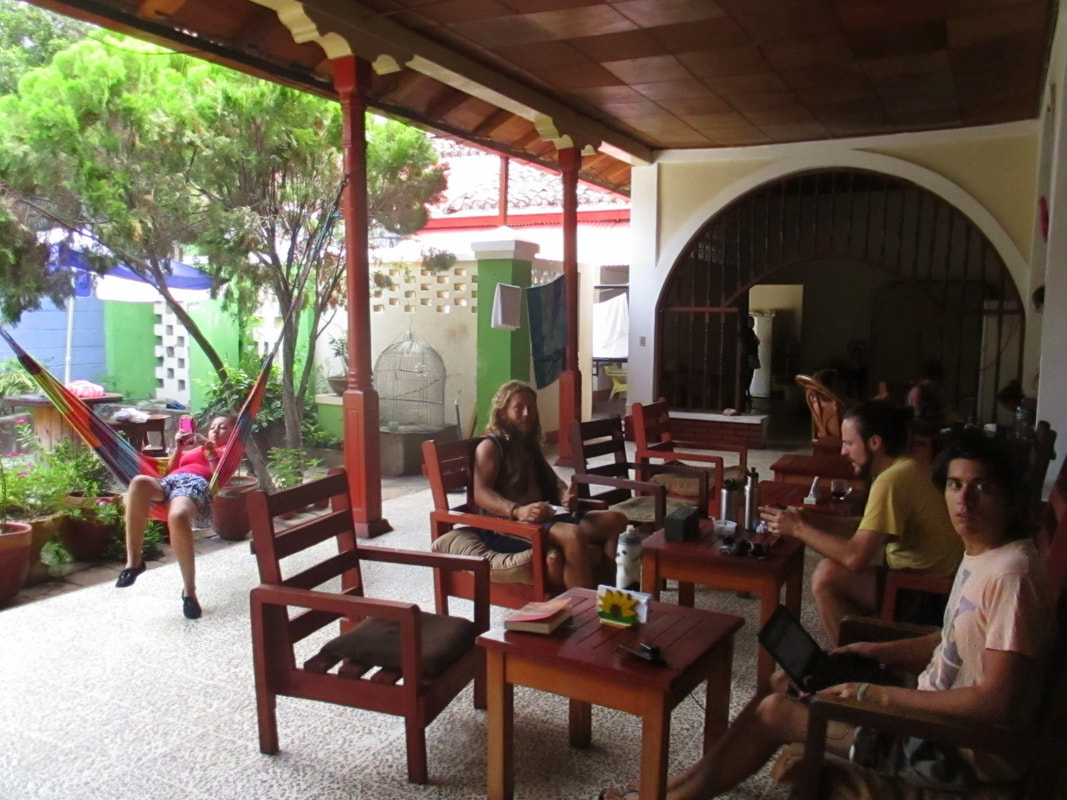 I swapped this volunteership for another one at the comfy Lucy’s Hostel, but I was glad to leave Granada a week after. I knew I would come back for my mother to experience the touristic part, but for now I had enough of the reality the many holidaymakers so nicely ignore.

The reality of little kids sniffing glue on the sidewalks to forget the hunger, of foreigners violently getting robbed on the street at night (I heard it happening a few times from my bedroom, and I lived in the ‘nice’ area) and the reality of me being drugged.

Yes, I said it, I was drugged.

Not by the locals, but by some happy ‘party-people’ visiting the same gringo treehouse-party that I did. Supposedly for someone’s birthday I got offered a shot with a group of people, but as soon as I downed it I realized it wasn’t just alcohol. Things became blurry and my (back-then-)boyfriend immediately noticed a profound change in my behaviour. I ended up leaning on him in order to keep myself standing... to finally pass out in the dirt anyway, while he tried to find a way to get us out of there. Thank the world he was there. Naive? Nah. I can listen to my parents and never trust strangers, but what a significant part of my life experience I would have missed if I did that! Everyone is nice until they’re not, it’s impossible to meet all those nice ones while avoiding everyone that might be not, even though instinct usually functions as a valuable tool. Both pleasure and suffering brings you further in life, accept them as they are. 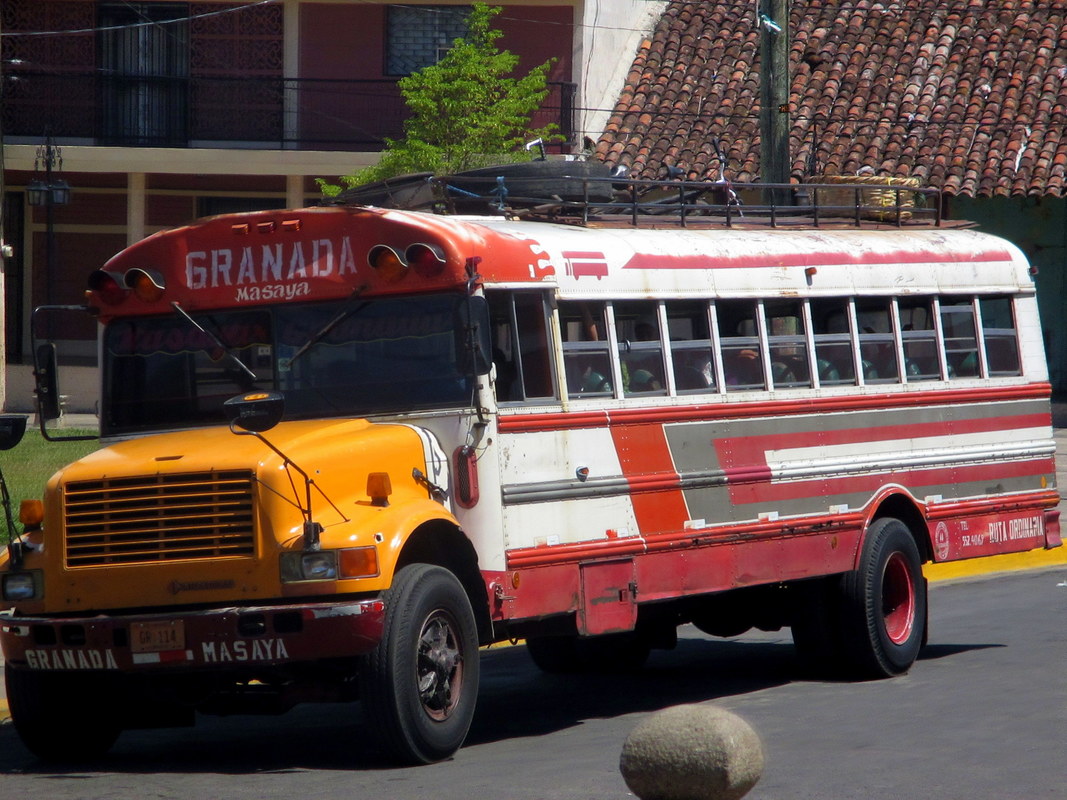 ​After all this, you probably assume I would be done with this city, but no: Places are coloured in by experiences, so it deserves a second chance. I was going to do it all different this time though: No volunteer work, boozed-up parties and hostels... Nope, I checked Mother The Queen and myself in at a fancy-pants 4* hotel with swimming pool, air-conditioning and butlers. After a year of bunk beds, hammocks and camping it almost felt awkward.
​ We had a massage, restaurant-dinners, wine-tasting and folk nights. 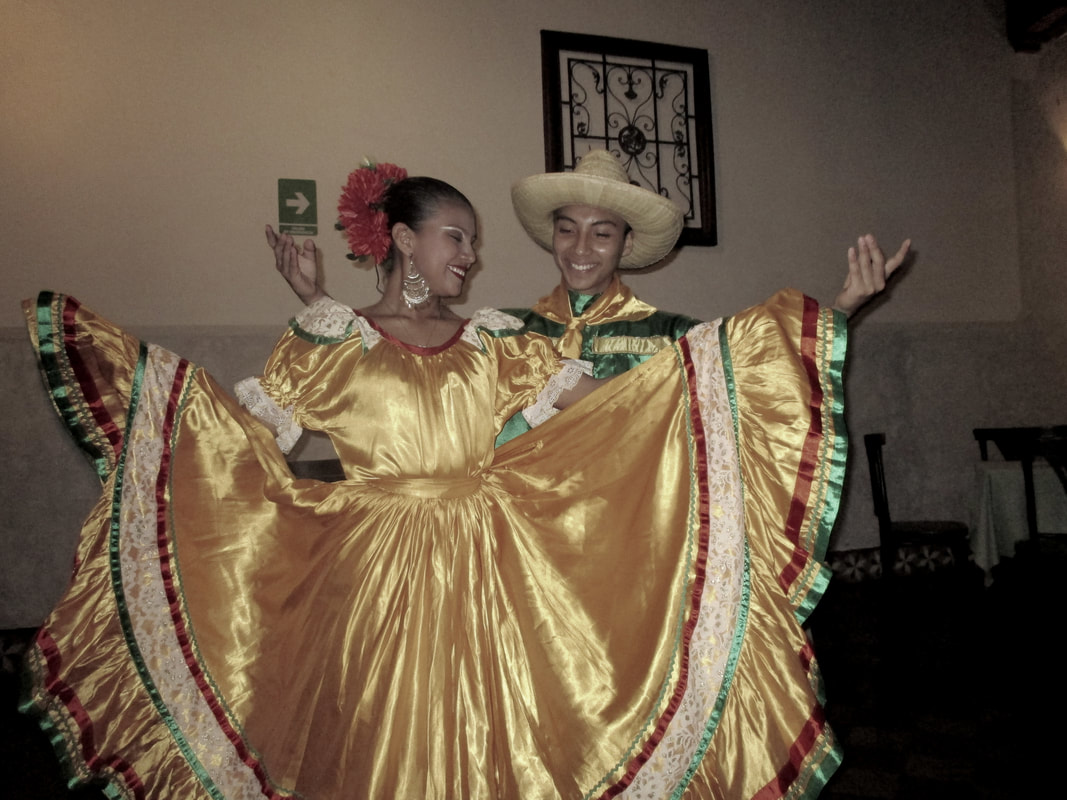 We took a boat along the isleta’s, which was alright but not living up to our expectations based on the many advertisements (the tour basically drags you to a sponsored restaurant and back, passing by a handful of privately owned islands that can’t be visited). I learned that 10 years ago one could buy a private island for a lousy 1000 cordobas ($36). Typical case of ‘too bad, too late’. The icing of the cake was my ascent of the Mombacho volcano: It was so good it got a blog of its own [check it out!].
Too make sure we wouldn’t get too spoilt I contacted La Esperanza, a volunteer organization providing free education in the slums and improving local housing and infrastructure. One of the teachers took us down to the school and guided us through the impoverished neighbourhoods. Now, I hear you thinking “Ah, some white women watching someone else’s misery… “. But no, not quite. The kids absolutely loved it. They grabbed our hands, hugged us, climbed on our shoulders and were too excited to show us their desks and homework: Learning is awesome! Job done well. Faith in humanity restored.
It inspired me to travel down to my next destination on the list: Roatán, Honduras, where I was teaching HIV-positive kids, victimized by sexual abuse and/or domestic violence and living in extreme poverty. Even in the most dark and depressing places there is room for hope and progress.
In order to support the travelers’ community, I spend many hours per week to adequately document all information and advices for prospective visitors, accompanied by a (hopefully) entertaining insight into my personal observations and experiences. This service is and will remain free. However, if you voluntarily want to make a contribution and support my travels and thus the creation of new stories and information supply, here is the button you’re looking for:
Donate
Related:
- Another colonial town in Nicaragua: León
- Volcano-hopping in Nicaragua: Isla de Ometepe, Mombacho, Masaya & Hervidores de San Jacinto
- Places to avoid in Nicaragua: San Juan del Sur & Managua
- Nicaraguan hiking adventures: Matagalpa, San Sebastián de Yali, Mombacho & Laguna Apoyo
- An amazing canyoning adventure in Somoto, Nicaragua
​​- The most authentic beach place in Nicaragua: Playa Gigante
- Corruption at the Nicaraguan-Honduran border
- A horrifying traveling experience in Valparaíso, Chile
- Not a good Couchsurfing experience: Asunción, Paraguay
- When Couchsurfing intervenes with El Salvadoran gangs
- My WorkAway project in Roatan, Honduras: teaching in the slums surrounded by HIV
- When a WorkAway project gets seriously weird: Isla San Cristobál, Panamá
- An abusive hostel owner & a pornstar: my volunteership in Boquete, Panamá
- Couchsurfing with several men searched on Interpol
- Colonial cities in South America: Salta [Argentina], Colonia del Sacramento [Uruguay], Sucre [Bolivia], Arequipa [Peru],
Cuenca [Ecuador], Cartagena [Colombia], Ouro Preto and Paraty [Brazil]
- Colonial cities in Central/North America: Antigua [Guatemala], Suchitoto [El Salvador], Merida, Oaxaca, Puebla and San Cristobál de las Casas [Mexico]
​​- Diving into Malaysia's history: Melaka
​- Korean culture at its finest: Explore Gyeongju!
- Other places where I (shortly) lived: Buenos Aires [Argentina], Florianopolis [Brazil], Medellín [Colombia], San Jose [Costa Rica], Roatán [Honduras], Boquete & Isla San Cristobal [Panama], Port Waikato [New Zealand], Haarlem [The Netherlands]
​- The city that smells like eggs: Volcanic Rotorua, New Zealand
​- Discover Romania's enjoyable cities: Bucharest, Brasov and Cluj Napoca
​- Check out Budget Bucket List's FAVORITE HIKING DESTINATIONS worldwide!