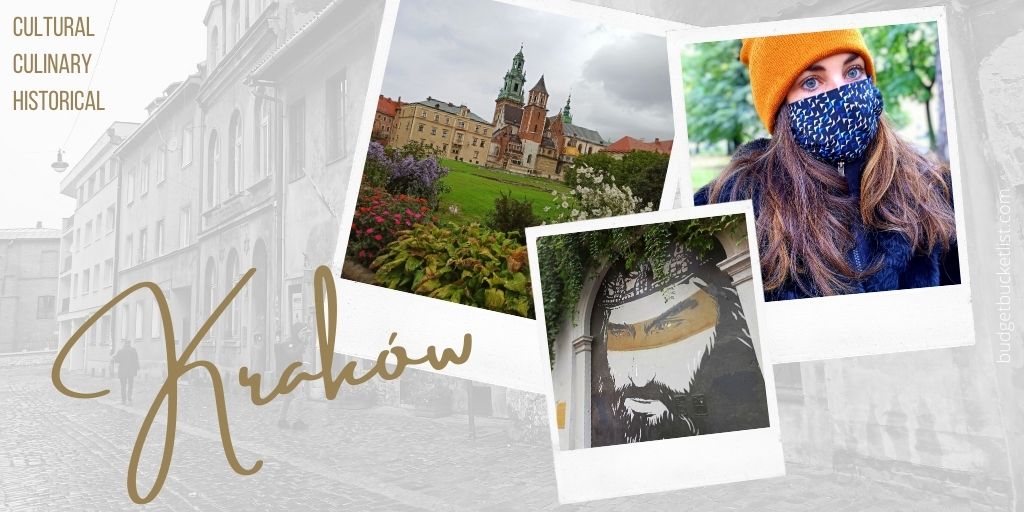 I travelled to Krakow with a double feeling. Happy, relieved… to be in proper civilization again among fellow human-beings, after spending a good 3,5 weeks in the wildest of nature while hiking the Glowny Szlak Beskidzki, Poland’s longest trail. And scared, terrified even… for the exact same reason. Add up that the national government now had officially joined the hysteria around the corona virus, sharpening its regulations significantly (a shame: one of the reasons I elected Poland as my 2020 travel destination, is because it kept its head as cool as its mountains). Alright then, mouthmasked I shall explore!
Too busy to read now? No problem, save it for later!
​Save on Get Pocket | Save in Browser Bookmarks| Save on Instapaper
Have you ever passed out in your life (besides for booze-related reasons)? Well, then you know how it feels to come back to consciousness: First blurred sight, slowly the sounds build up and all of a sudden, you’re back in reality, extremely confused, with BOOM: people all around you. That’s exactly how it felt to suddenly be in Kraków, after isolating myself into the forests and mountains of the Beskids, far away from all the media madness, lockdowns, and sickness 2020 is now famous for. In fact, not giving a damn and do the exact opposite of a lockdown (far away from humanization – back to our natural roots, focused on the mind and body) made me feel healthier than ever. Except for my feet, then. They were utterly destroyed. So while undergoing a pedicure, during which the nervous trainee demolished my feet even further by taking away too much skin until my toes were officially bleeding, I pondered which of its many sides I wanted this city to show me… Cultural, culinary, or historical? Or all three of them?

I like to think of myself as a woman appreciating culture with both a ‘capital C’ and the ‘small c’. The latter represented by its people, their habits, believe systems… submerging into their way of life, listening to the subtle varieties in their accents, with an open mind trying to understand local values formed in the shadow of their history, landscapes, and religion. Breaking through that surface approaches the true essence of traveling. 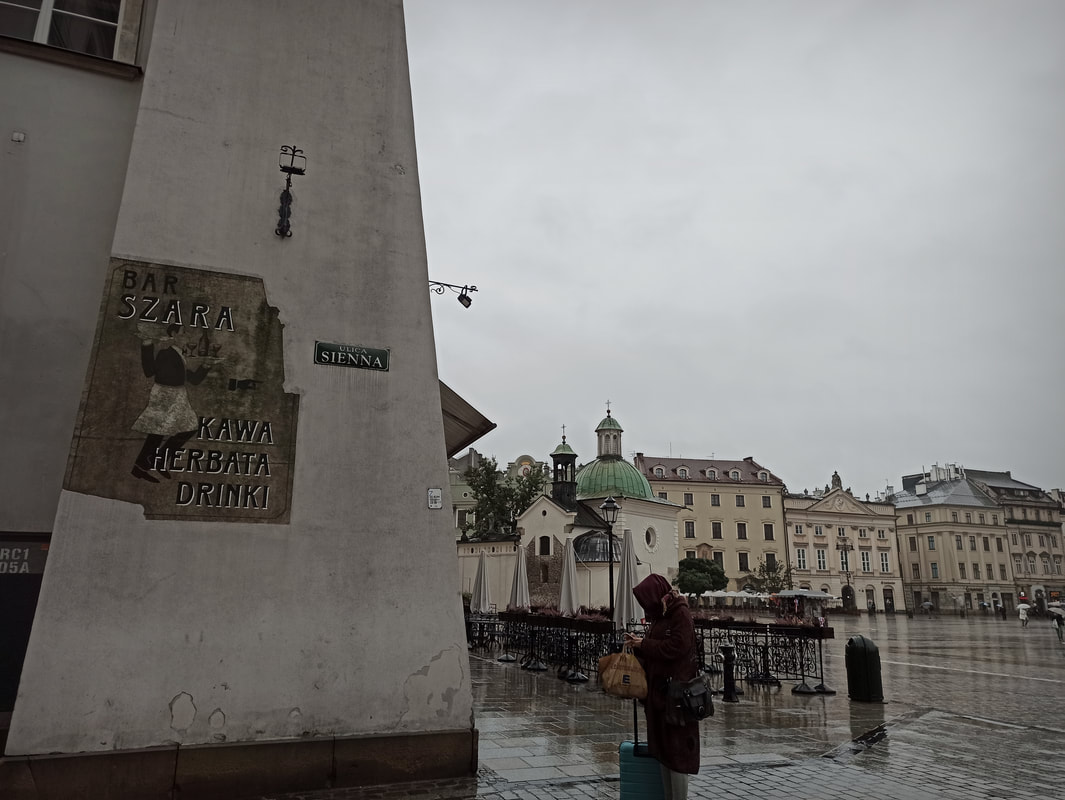 My first inclination is therefore to avoid fellow travellers when traveling. Not because they don’t interest me, but what can I learn from them what I don’t already know? They know as little or even less of local culture than I do. As an outsider it’s my objective to slowly make my way to the inside, which in the light of current times is quite the challenge, as mouthmasks and 2-meter-distance not only imply a physical distance, but also trigger a mental one by the means of fear and paranoia. Luckily, I had already made a friend, digitally - how that so easily goes in our current era - who helped me translating and organizing my hiking trail… and who now in person showed me his city.

Proudly, as most Polish people are when it comes to their homeland. And full of kindness and helpfulness, which is another innate trait deeply drenched into the hearts of this nation. Something that surprised my mother, as from the outside they seem like tough cookies to crack (The Netherlands welcomes many Polish immigrants)… a toughness that is indeed present, and is being demonstrated in for example their doggedness and determination in sports and why not, in life in general. Strong people, but extremely hospitable and affectionate. Ones that enjoy sharing a beer with a stranger, which I recommend doing in Kraków’s many establishments. Ones wishing you a “dzień dobry” when strolling through the streets of Stare Miasto, Nowa Huta or Kazmierz… smiling from under their umbrellas when crossing the Rynek Glowny Central Square, walking through the St. Florian’s Gate, or traversing the Ulica Grodzka. Also, nature-loving people, obvious by the enthusiasm and presence of all age groups on the Glowny Szlak Beskidzki, but for example also visible in the cityscape of Kraków, at times seeming more to be a city inside of a park than the other way around.
More time? More greenery! Head to the natural areas around Kraków: Zakrzowek, Wolski Forest, and Park Lotników Polskich!

​
It was good to see the city through the eyes of my by-now-friend Marcin, while listening to his entertaining tales about histories and legends of town. And when he was gone, I tried to understand more of his background, like that of many Polish people, shaped by religion. So I visited the St. Mary’s Basilica, St. Peter and Paul Church, and the St. Wojchiech (there are many more)… culture with the ‘capital C’, but simultaneously reflected in culture of the people. One observation I made, in the countryside already, is the relative soberness of the houses of god here… often made of wood or basic materials, yet obtaining this pure beauty. I remembered the words of Marcin, when I asked him why he spent so much of his time helping a stranger… Because he’s a Christian, not only on Sundays, but as a way of life. A religious perception of giving instead of taking (unlike in many other countries). While I don’t believe religion is a necessary requirement for being a good person, I for sure appreciate the way it motivates people in trying to be.
​
More of these faith-fuelled roots are highlighted in the National Museum of Krakow, be it Christian or Jewish, another spiritual foundation not only shaping history (in many-many ways – Auschwitz is around the corner) but leaving its imprints in the culture of Kraków today. To dive a tad deeper into the Jewish side of the city, head to the stunning Kazmierz district, one of my favourite quarters, perfectly combining the modesty of a humble, slightly run-down street vibe, with the creativity that it inevitably triggers and simultaneously re-injects. There are several museums allowing a closer look into Polish Jewish culture, the Museum of Jewish History and Culture as well as the Galicia Jewish Museum temporarily being closed due to Covid. However, Schlindler’s Factory (yes – from the List), being the tourism-pumped cash cow it is, is always open. Don’t expect to find much about the movie though, besides some info signs questioning Mister Schlinder’s background and integrity, that’s just to lure you in and pay 22 zloty’s instead of the 2 zloty’s other museums ask (I’m quoting student prices, also to be obtained by 10-years-expired-student-passes, blink-blink)… it’s simply a museum about WWII and the holocaust in Kraków, with all the Nazi atrocities involved. A well-done museum though, admitted, with interactive displays not once getting boring.
Photos of the National Museum of Kraków, the Kazmierz district and Schlindler’s Factory

​
My favourite reflection of culture, like a mirror of both personal as well as collective minds, is art. This can be theatre, which is cut down ‘cause of Covid, but also a statue or a painting. In my opinion this is most splendidly done in the MOCAK, Kraków’s Museum of Contemporary Art. While the National Museum gives a fantastic insight in the development of art genres over the centuries, the MOCAK gathered all beauty (and nonsense) worth admiring from our current times. 7 zloty well spent.
More culture: Wawel Castle / Ethnographic Museum / Muzeum Witrazu / Museum of the 19th Century Polish Art.

Now, it didn’t take a long time to convert me to Polish cuisine. I was a fan of pierogi before I even set foot on Polish soil (the Poles are everywhere – spreading good taste!), I simply became an addict while there. Think of every ingredient you could possibly enjoy… odds are high they stuffed it into a dumpling once. Bless them for it. The variety of pierogi is endless, not in a month eating it every other day it bored me. (Although my mouth was slightly shocked when accidentally eating some sugary ones -  I do not have a sweet tooth).

But the Polish cuisine is more than just pierogi. Okay, what else they got? A simple glance at Kraków’s high concentration of trendy and cosy coffee bars and restaurants, and you’ll know you’re gonna find out soon enough. For example, a Polskie naleśniki, a Polish pancake that can be either sweet or savoury, or even better: a placki ziemniaczane, a potato pancake. Home-made or factory-delivered, I don’t even care… every time I thought I was going to have just one, I found myself finishing a pack in its entirety. Too good. Something else downright fantastic are the gołąbki, cabbage rolls of which I also found variations in Romania and the Balkan, but here with its own special twist to it. Given the low temperature dips, soups might be desired, for which I advise the zurek (sour rye soup) or kartoflanka (potato soup)… best downed with some sides of kasza ryczana (cooked buckwheat), ziemniaki gotowane (boiled potatoes sprinkled with parsley or dill), surówka (raw sauerkraut, apple, carrot, and onion salad), ogórek konserwowy (preserved cucumber) or pieczarki marynowane (marinated mushrooms).
Now you might have noticed that I listed the veggie options, lone soldiers on a meat-loaden playground. We might not change the world on our own, but every purchase is a vote on how you’d like to see the world we live in… in my case: Preferably green, ethical, solidary and without unnecessary suffering of both people and animals. For those agreeing, I’d like to forward to this restaurant list: Happy Cow, as Kraków sure is a true veg-heaven (like most European cities nowadays). If you’re on a tight budget, which you probably are as you’re reading this blog, download Too Good To Go for extremely cheap budget bites that supermarkets / restaurants would have thrown away as left-overs if it weren’t for you (fight food waste, eat cheap!).

When I entered my hostel a sign reminded me I was consuming my night rest in a room in forgone times utilized as a distressed torture and dying spot of political opponents (against the Nazi / Soviet regime) during WWII. That’s for a comforting thought. It’s just one element of the multi-faced history of Poland as a whole and Kraków specifically.
​
Now I can tell you what I could have seen in the Museum of History (if a virus didn’t close it down, making history), but it’s time to hand the mic to Polish truest history enthusiast Marcin to fill you in:

For a unique insight in the odd and intriguing stories that once happened on the soil of Kraków, Marcin is your man. On request of Budget Bucket List he went out of his way to fill you in on everything you'd want to know about the legends and tales of the city you are currently researching.

Take my hand and follow me to our special guest blog: