Download File
“Porque Villaguay?”, the lady behind the tourist desk asked me with a face of incomprehension.

An interesting way to promote a city that apparently is worth a tourist desk in the first place. But indeed, I was here for a reason, it wasn’t the most obvious travel destination. Argentineans are family people, which means if you’re dating one you will have to join into a considerable amount of family time. Apparently some family members got the idea into their head to move to this ‘city’ in between the rivers, in the province of (guess what) Entre Rios. I say ‘city’ because it apparently still has 48,000 registered inhabitants, which is more than the village where my mom popped me out (Halsteren: 13,238), but it has all the feels of a tiny hamlet… Shops closed on Sundays, youth having nothing better to do than to just drive around the main square in cars pumping on loud reggeaton, that kind of stuff. In fact, most streets are even dirt roads! Is that a bad thing? No, absolutely not, after a considerable amount of time in the city fumes and traffic congestion of Buenos Aires this was everything I was hoping for. 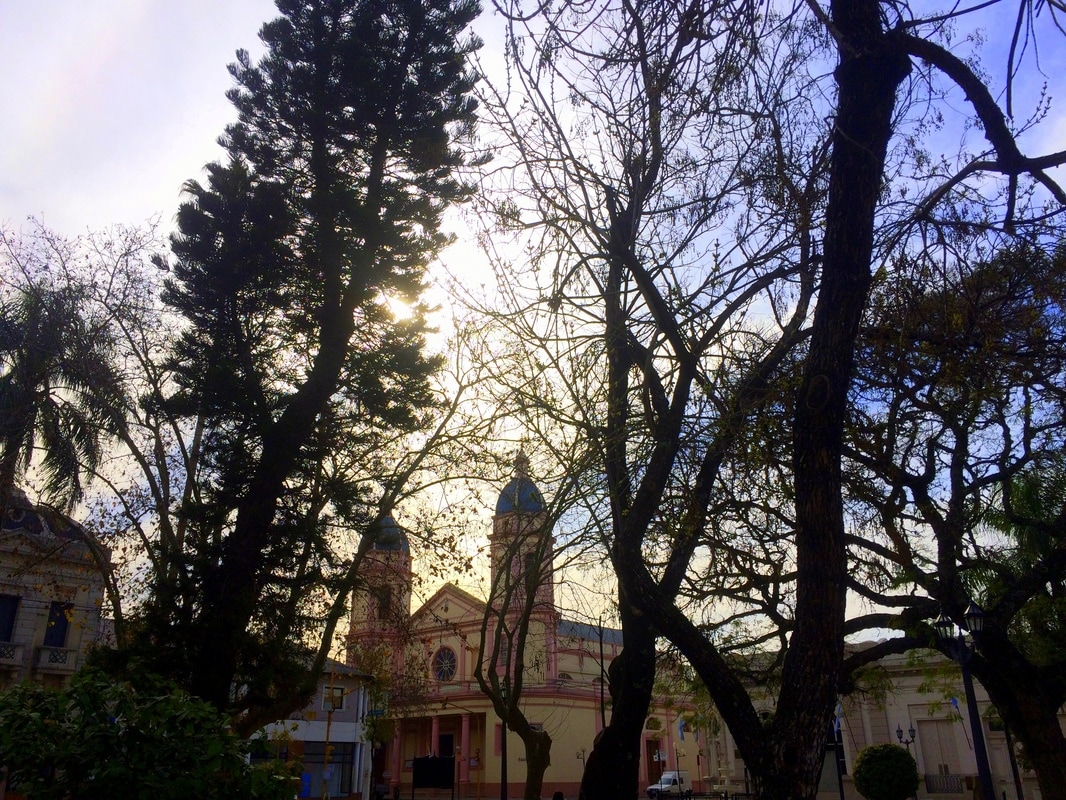 ​There was even stuff to do, who would have guessed? After a leisurely stroll around the main square where Pokémon catchers fulfilled their missions, we headed to the Museo Histórico Municipal. Even though it seemed like it, I apparently wasn’t the first European that every visited this place. My former southern neighbors, the Belgians, had their settlements here in a distant past. Together with some Italians, French, Germans, Jews and (of course) Spanish they left their footprints on what is now Villaguay.
​After exposition rooms full of Belgian curiosities like the smurfs (Los Pitufos in Spanish), waffles and beers we went home for the merienda, where we ate enough to avoid the Argentinean meat fest: the asado dinner. While I had to explain my country in fact has an own language and we were indeed involved in WWII – everyone knows the Netherlands here, related to the fact that we have an Argentinean queen, fulfilling the patriotic Argentino’s with boundless pride, but that’s about how far the general knowledge goes – we drove to the Aero Club. Some husband of a sister of a partner of a mother had a small open, recreational airplane for his weekend amusement. My intention was instantly drawn as I hoped to hassle myself into a free passenger-joyride. But luck wasn’t on my side: the wind wasn’t blowing the same way my mind was, but it was pretty sweet to see this aircraft collection anyway. 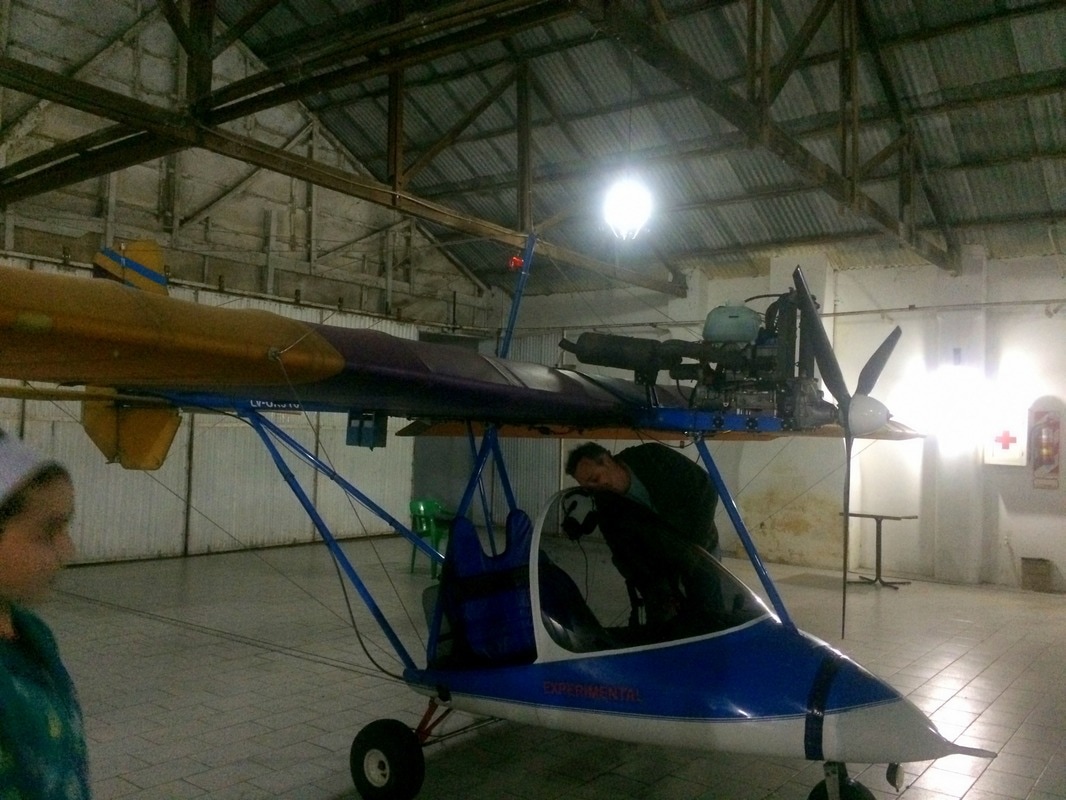 ​After a coma-sleep you wouldn’t easily get in a capital city, we scraped together a daypack for a road trip to Colón, a ‘beach town’ on the river bed of Rio Uruguay. The river in fact forms the border between Uruguay and Argentina. Even though the beaches were swiped away by some floods years ago and all that’s left is some artificial beaches, the idea is nice. 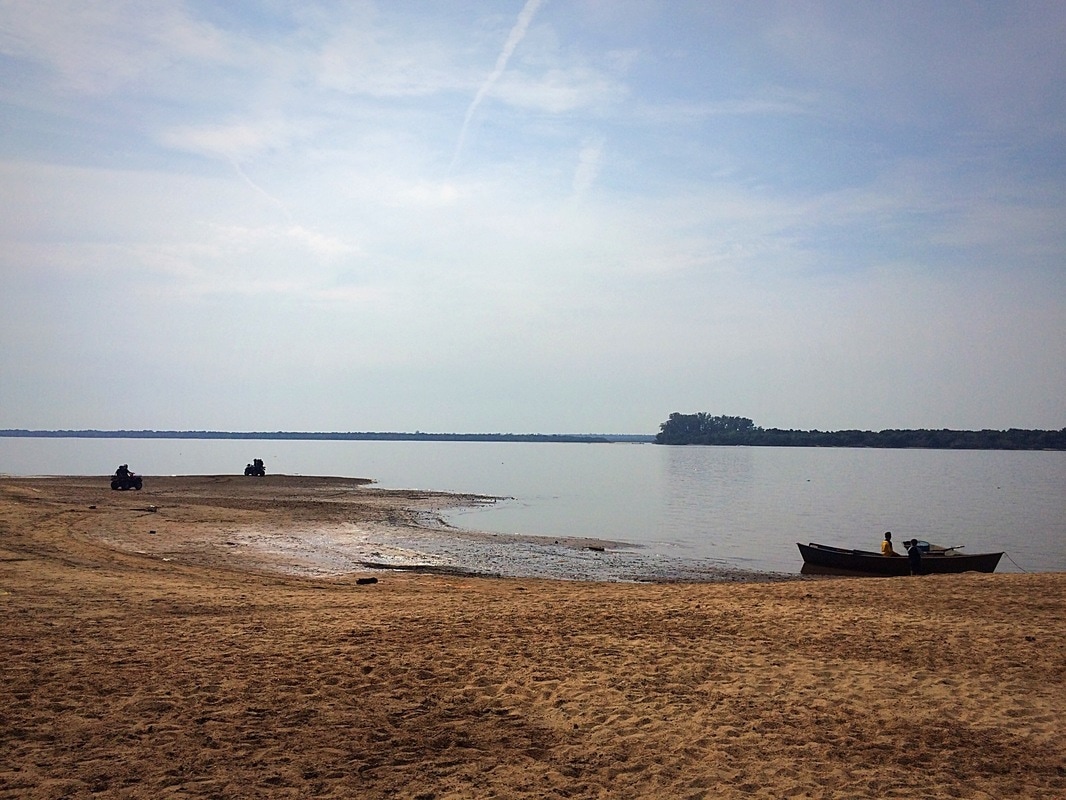 Colón (fun fact: its name refers to Cristóbal Colón, which is –tadaaa- the Spanish name for Christopher Columbus), is the weekend hang-out of the average Argentinean. So what can you expect? Loud cumbia music, liters of wine and the smell of a hundred animals dying: the whole coast is dotted with public barbecues making the biggest asado-gathering of the hemisphere possible. It has its charm if you want a sneak-peek in local culture.
I had slyly scattered around some brochures of Parque Nacional El Palmar, hoping someone in the household would pick it up somehow and decided it was his idea to go there.

My plan worked like a charm and before I knew it we were driving to the National Park I had been reading about weeks in advance, hankering. The park covers an area of about 85 km² and was initially created to preserve the typical Yatay palm trees. Strangely enough it’s a park to be entered by car. I mean, you can probably walk it, but the real question is if you want to if a hundred cars race by making you disappear in big clouds of dust. It’s quite easy to spot some wildlife though. We were fortunate enough to get some foxes and capybara’s (like giant guinea pigs) in front of our camera lens. The last one is being hunted for its meat, pelts and fatty skin, which is used in the pharmaceutical industry… but here we saw dozens of them alive and in their entire splendor. After scenic walks through forests and along beaches we drove back to our temporary home base, Villaguay.
​The last day we spent visiting the second and last museum this municipality houses: Museo Arqueológico Tierra de Minuanes, dedicated to the indigenous culture of the charrúa-mihuán, before it got wiped out by my fellow Europeans. The museum can be narrowed down to one room filled with dug up ceramics, stones and bones, but together with the lengthy explanations of a passionate guide this was an interesting pastime.
It was time to leave Entre Rios, following a road providing astonishing views of the ‘campo’…

Fields that resembled Windows screensavers seamlessly changed into wetlands lit up by the purple horizon.

Overlooked landscapes easily ignored by cars drifting by on their way to other places, but for me a destination in itself effortlessly seizing my dreams… Memories in between the rivers.
In order to support the travelers’ community, I spend many hours per week to adequately document all information and advices for prospective visitors, accompanied by a (hopefully) entertaining insight into my personal observations and experiences. This service is and will remain free. However, if you voluntarily want to make a contribution and support my travels and thus the creation of new stories and information supply, here is the button you’re looking for:
Donate
Related:
- Go to the Argentina Page for more blogs and national parks!
- More Argentinean beaches: Puerto Madryn
- More beach hangouts in Uruguay: Cabo Polonio, Barra de Valizas & Punta del Diablo
- Brazilian beaches: Florianopolis, Ilha Grande & Rio de Janeiro
- Paraguayan beach: Encarnación
- Bolivian beach: Copacabana & Isla del Sol
- Colombian beaches: Palomino, Cartagena, Santa Marta & Tayrona National Park, Colombia
- My 1-month Workaway-project on an (almost) uninhabited island in Panamá: Isla San Cristóbal, Bocas del Toro
​- More beaches in Panamá: San Blas, Santa Catalina & Costa Abajo
- Beach getaway: Nicoya and the Costa Rican coast
​- The tropical beaches of Tortuguero, Costa Rica
- Beach and surfspot in El Salvador: El Zonte
​- The beaches of Honduras: Tela & Roatán
- Enjoying the beaches of Nicaragua: Isla de Ometepe & Playa Gigante
- The beaches of Mexico: Cancún (don't go there), Cozumel & Tulum
- Relax at the beaches of the Algarve, Lisbon
- Spain and its beaches: Barcelona & Malagá
​​- The ultimate off-the-grid beach & surf spot in New Zealand: Port Waikato