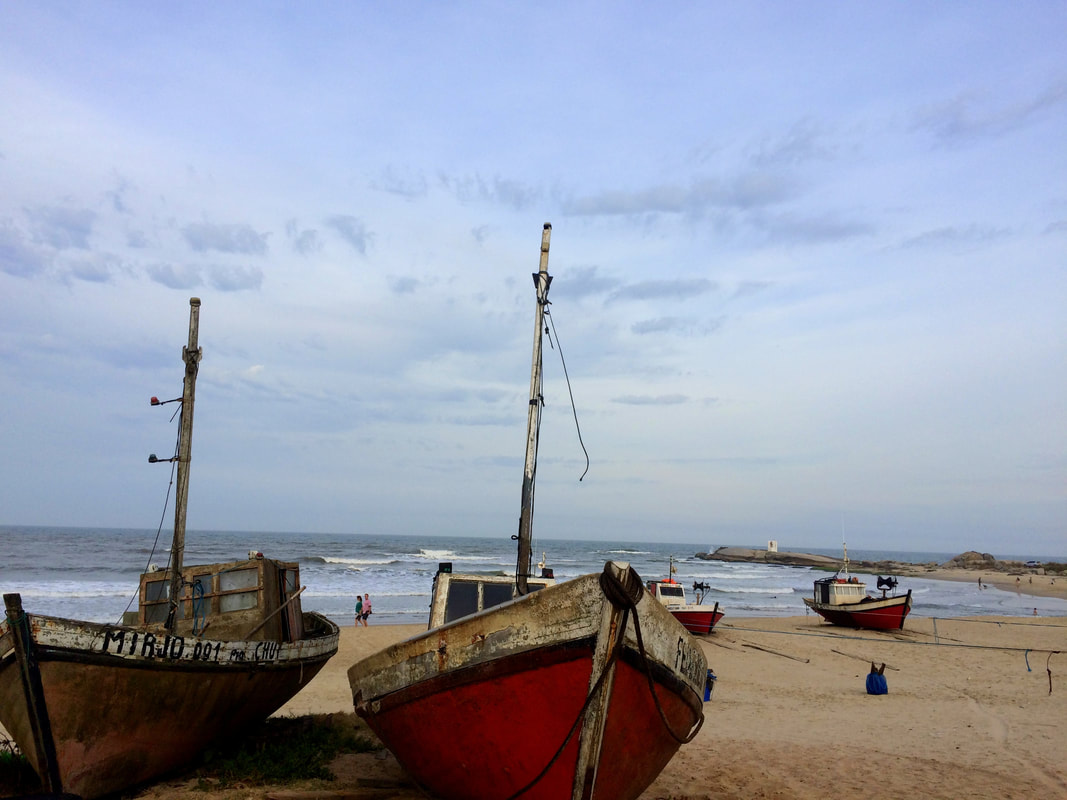 There’s a whole world to discover. That means I have generally no time to return to the same places. Yes, I know, that’s what people do, returning to a place they love because they know they love it. But isn’t it way more exciting to see what other places you might love as well? If you already have one kid, you’re not going to stop yourself from having a second just because you might not love that one as much as the one you already know… right? Right. So when I returned to Uruguay I traced down several Uruguayan online communities to check which other places in their country are also worth visiting, besides Colonia, Montevideo, Cabo Polonio and flashy Punta del Este (the only 4 places international travel bloggers seem to have written about). The result was a list of 35 different places, which is quite impressive for a country of only 176.215 square kilometers and 3,4 mln inhabitants (that said, The Netherlands is only 41.543… with 17 mln inhabitants).

So I kept a tally, to conclude with one obvious winner: the beach resort of Punta del Diablo, a stone’s throw away from the Brazilian border. Let’s go.

overlooked one crucial concern though… I’m not mainstream. No, don’t worry, I won't go all hipster on you: It’s not my sole goal in life to ‘stand out from the crowd’ to get that same crowd’s recognition. If you think your overthought clothing style or the way you trim your beard has to be a symbol of your liberal unconditioned thinking, you might not be as free as you really think you are. [I mean, the first thing I always hear when I answer I’m into death metal is that “I don’t look like it”. News flash: Your hearing organ has nothing to do with your clothing style, unless you're 15 and in desperate need of acceptance from your peer group in a clueless search for identity.] But yes, I never felt that connected to what society thinks is the way to go, no matter if it comes to music, education, careers, culture, consumption, economics, religion or how one should design life in general. So what the masses define as paradise might not overlap with my own interpretation of a travel walhalla. Enter Punta del Diablo. 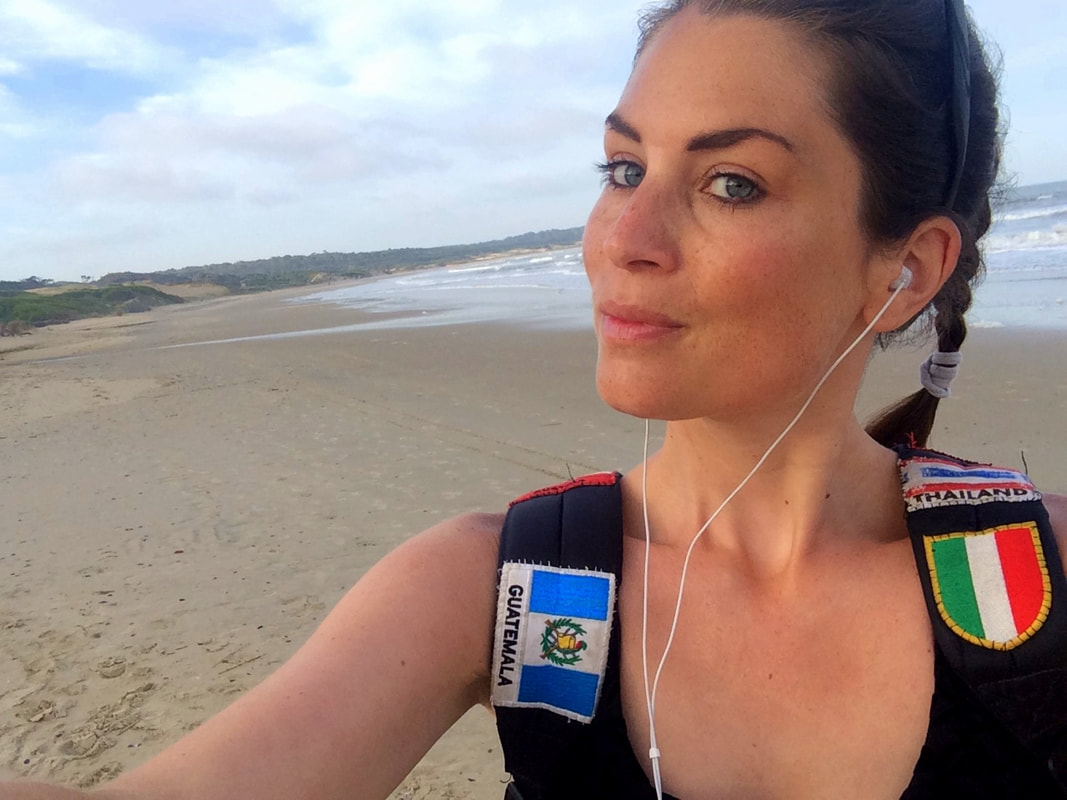 After listening an hour to my mom’s complaining about the intermediate distances (yup, it’s not as small as Barra de Valizas or Cabo Polonio and in low season there’s no public transport) and paying 8 shining dollars for a lousy cup of coffee I decided I didn’t like this place. Then German appeared. Who’s German? Ladies and gayfriends, take a seat. German is not only the owner and caretaker of Mandala del Mar apartments where we happened to stay, this heaven-sent savage surfgod is a knee-weakening demonstration of the delicious forms mankind can be presented in as well as the most breath-taking appearance you could possibly track down on the entire Uruguayan coast. Nailed to the ground and entirely speechless we stared into his earth-shattering blue eyes brighter than the brightest sea, framed by sun-bleached curls forming little trifles for the wind, not hearing one single word of the lengthy description he provided us with. It took about 5 minutes after he left the room before we slowly came back to our senses and my mom whispered “If I was only 30 years younger…”  ​

Yes, then what mom? I AM 30 years younger… and sharing a room with my parent ;) So if there’s not going to be any romance and downtown Punta del Diablo isn’t that sensational to begin with, how are we going to kill the hours… days? Well… eating is always a good solution to basically anything. And with the tongue-triggering local specialty buñuelos de algo, veggie seaweed balls, you won't hear me nagging. Plus: Reading in a hammock, never overrated.

So that’s where I left my mother while I put on the hiking boots, as sitting still is a bigger exercise to me than the most demanding trek. Flogged by the unforgiving sun I headed to the quiet freeway to hitch a ride to the Forteleza Santa Teresa, a medieval fort located in the equally-named national park from where I could hike back via the several indicated trails I tracked down on the map.
Little did I know this historical hotspot served that day as the location of the fancy-pants Rotary Club get-together, which I accidentally party-crashed. Before I realized it I was posing for pictures shaking hands with men in suits, in the meantime optimizing my proximity to the open bar. I couldn’t look more out of context with my shabby sporty outfit and patched backpack in between the gala dresses, but I guessed everyone was just too drunk to notice. An unusual takeoff of a hiking trip, I concluded while downing my second glass of free wine and plundering the salad bar.     ​ 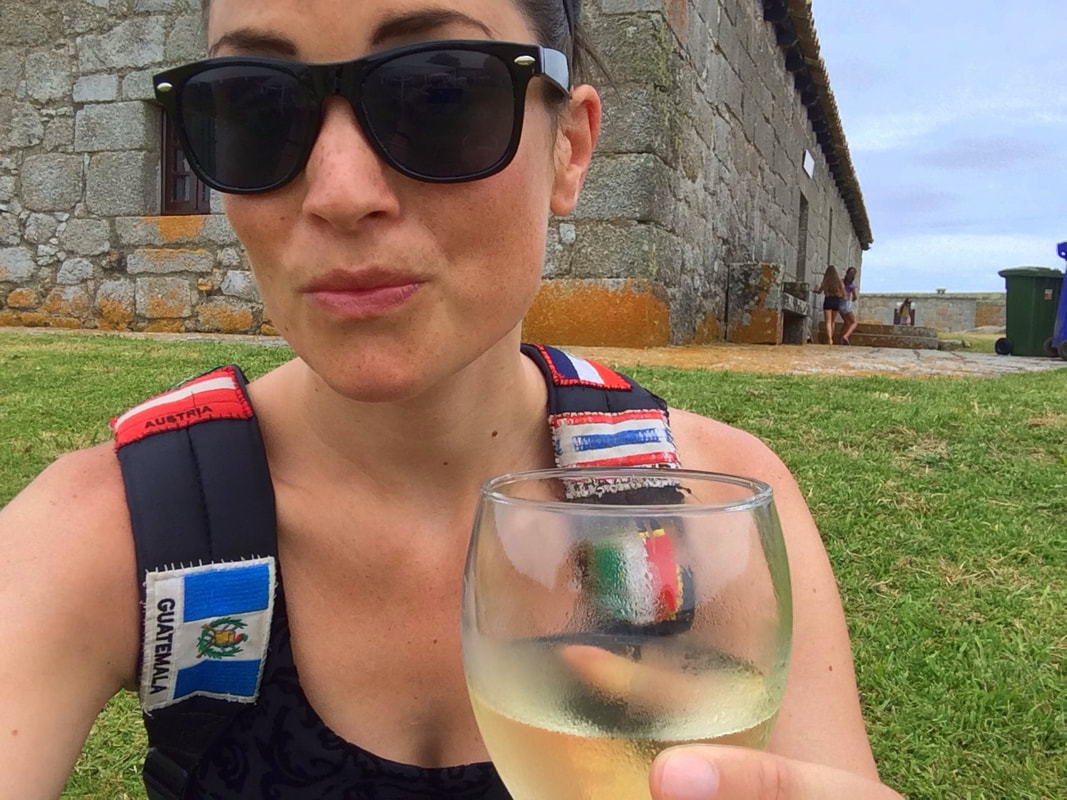 I poured a third glass in my water bottle (it was 32 degrees, always wise to stay hydrated - yeah I know) and marched into the direction of Punta de la Moza, which offered a very high whale look-out point without stairs. Thanks for that. I descended to the beach to check out the surfer boys (who says women can’t be pervs: feminism gone wrong!) and continued in the direction of El Chorro, Pajarera and Capatacía… attacked by territorial birds. Give me a break! I’m vegan for f#cks sake, I won’t eat you nor your eggs, don’t let me run around like a beheaded chicken in a state of barbaric hysteria with my backpack on top of my head to protect myself. 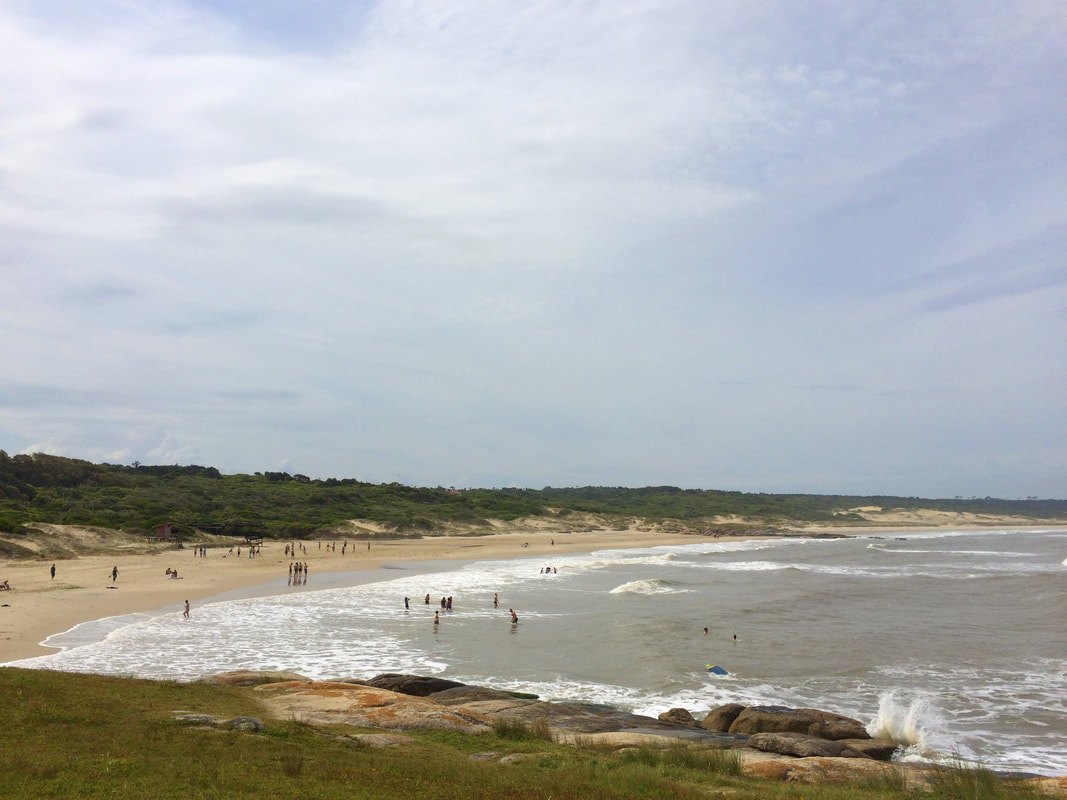 It might explain why I was the only person walking here. In the 30km that would pass by under my shoes that day I only saw cars and tourist buses racing by on the asphalt roads eliminating all rustic paths and hidden trails that usually make national parks so appealing. This whole place studded with campsites, cabañas and restaurants felt more like one big holiday park than a natural reserve, to be honest. I mean, it’s not a bad place: the nature was pleasant as always and, besides the attacking ones, the many bird species cheered up the experience… but I guess I just got mislead a bit by the name ‘national park’. To add to the oddness: the park contains a zoo. Uhm, people go to national parks to admire animals in their natural habitat, not to watch them in captivity… right? What’s up with that, Uruguay?    ​
I looked at the time. 2 hours before the sunset would kick in. Could I make it to Mirador Mangrullo and then return and take another route to Playa Grande, where there might or might not be direct access to Punta del Diablo (in the last case I must walk back about 12km in the dark)? Probably not. Let’s give it a go anyway.     ​ 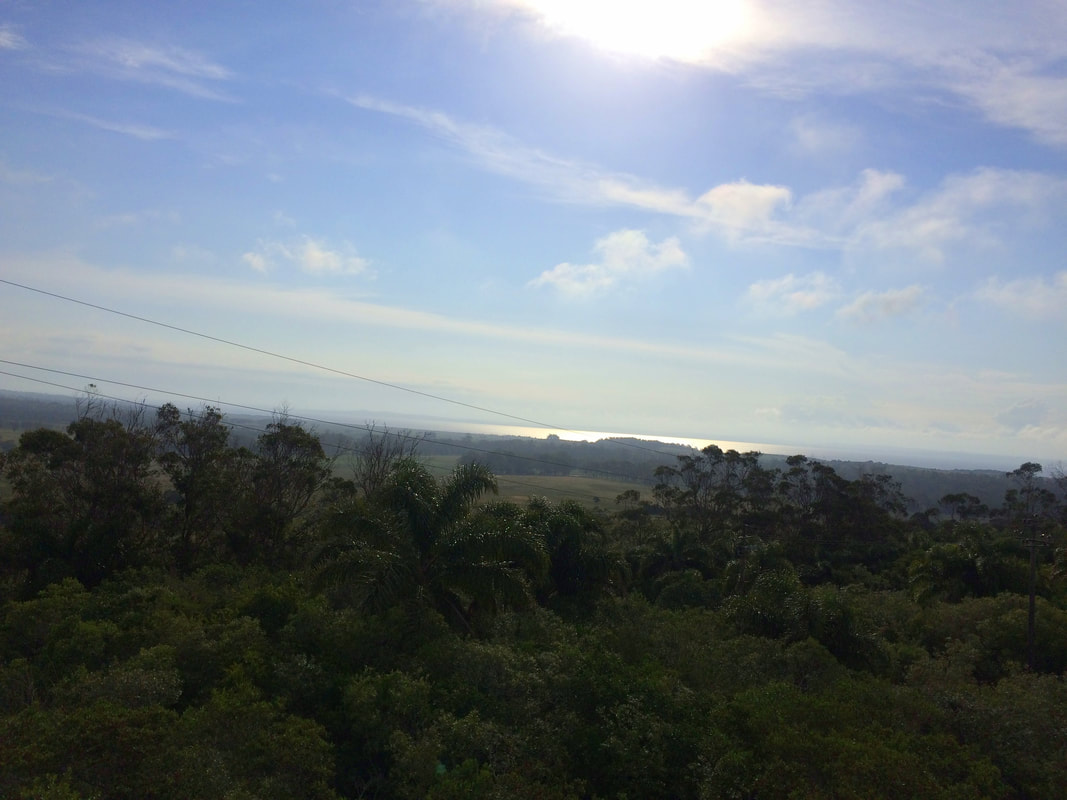 I’m glad I accepted the risk and finished this last trail heading south, as this part was the most delicate part of the park I had seen so far.

Swaying through the green, overgrown roads bringing me to the endless stretch of empty beach that seemed to be awaiting no one but me, an unsettling realization seeped into my consciousness: I might have fallen in love with Punta del Diablo after all.

Head over heels and without any prior notification. Hey, this wasn’t part of the deal. Now I have to stay another day, as Playa Grande can’t be left there un-enjoyed. 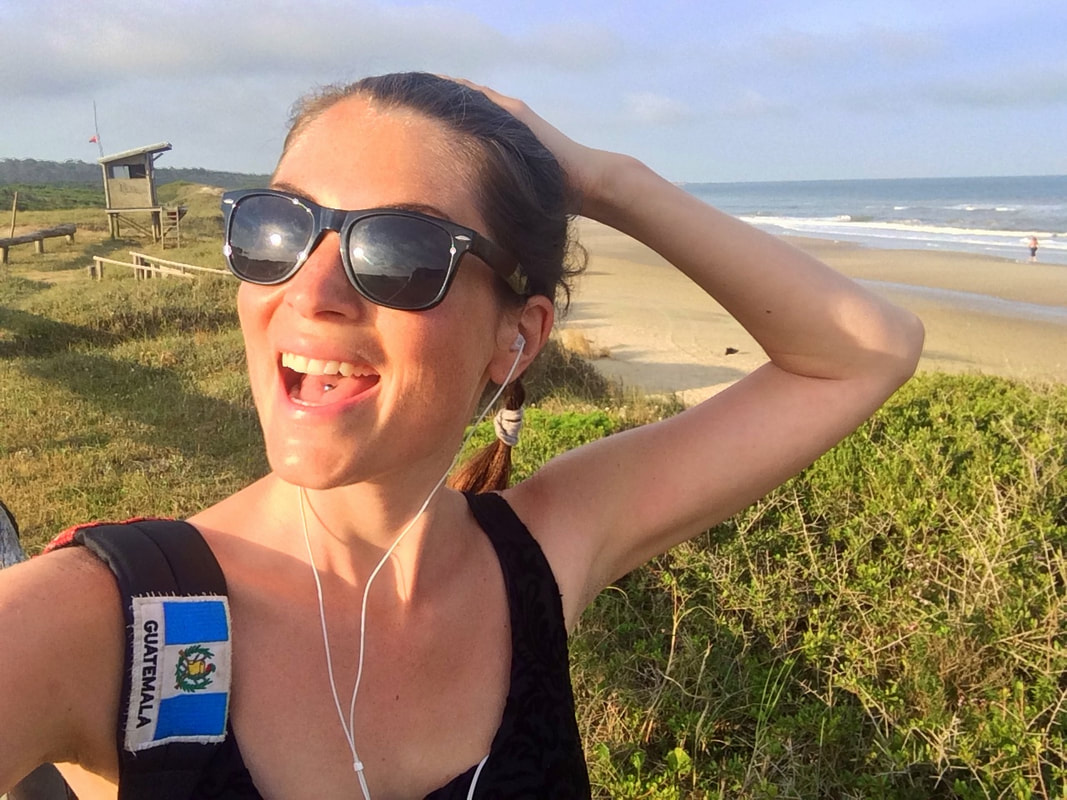 So I knocked on German’s door to extend our stay… three times, as the first two times Mr. Hotshot opened I instantly forgot what I was doing there (or what my own name was), and glided into my bikini to explore that beach a bit more.

​Horizontally, if you don’t mind. With a book in my left hand and a drink in the right… completely forgetting I’m almost transparently white. After that day I wasn’t anymore, I can guarantee you that. If the native animal of Uruguay would have been a bull I would be in deep shit, as I was by far the reddest thing in the entire environment. From knees to ass and belly to boobs, everything had turned into that stunning red glow usually only reckless gingers get treated on every summer. 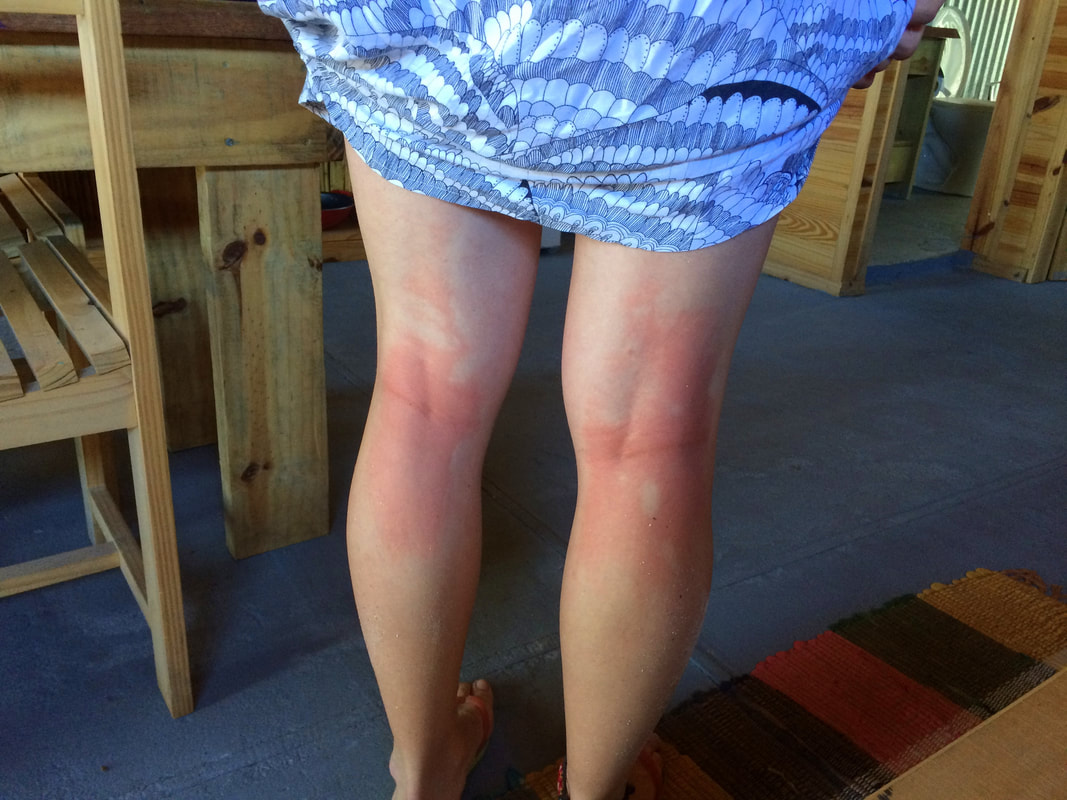 I accepted my fate. I got this instant crush on Punta del Diablo after all and if I had to pay for that with a few nights wrapped in frozen towels and aloe vera, so be it.