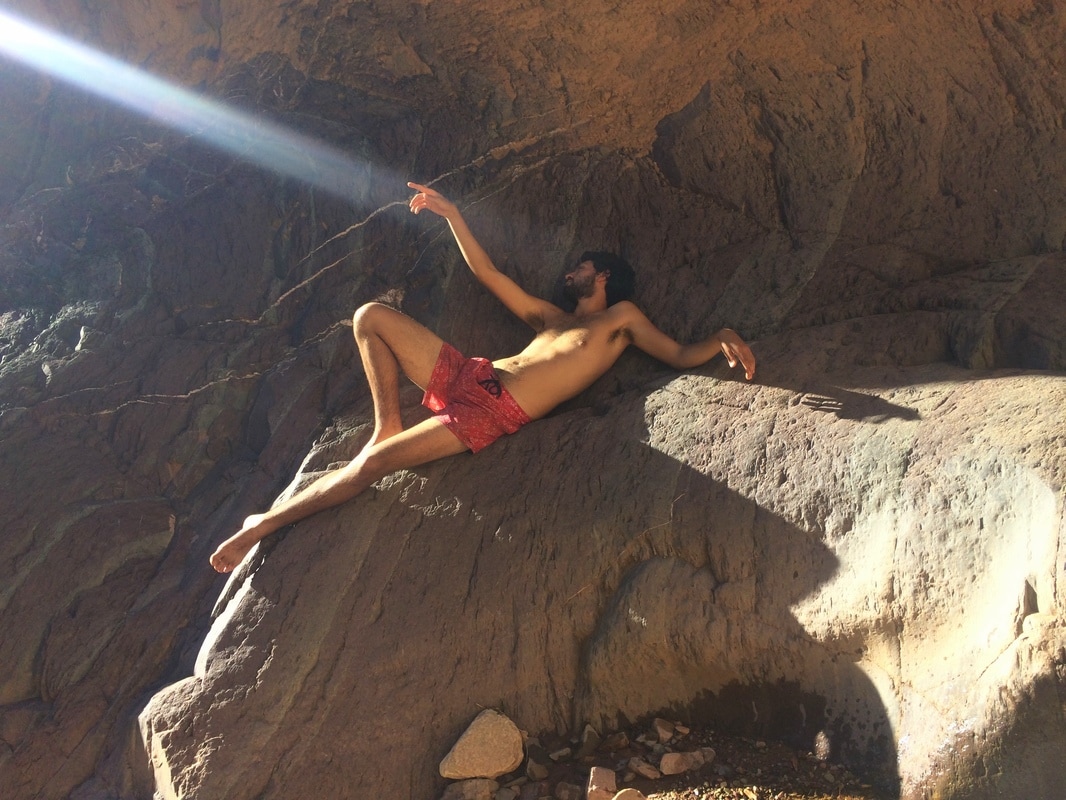 As my spoilt mind is getting used to, my ride from Jujuy to Purmamarca was immediate. I courteously passed the line of many hitchhikers to avoid bad karma, to nevertheless see the very first car arriving driving passed everyone to halt at the end of the row to offer me a ride. Argentina is very ‘machista’ in an often rather elegant way and I’m one of the females that’s profiting from that. Jorge, a middle-aged musician from Tilcara who – I would learn soon enough – would fill my phone memory with love poetry, was so pleased with my company he even dropped me off right at Purmamarca’s main square, entirely out of the way of his foreseen destination... 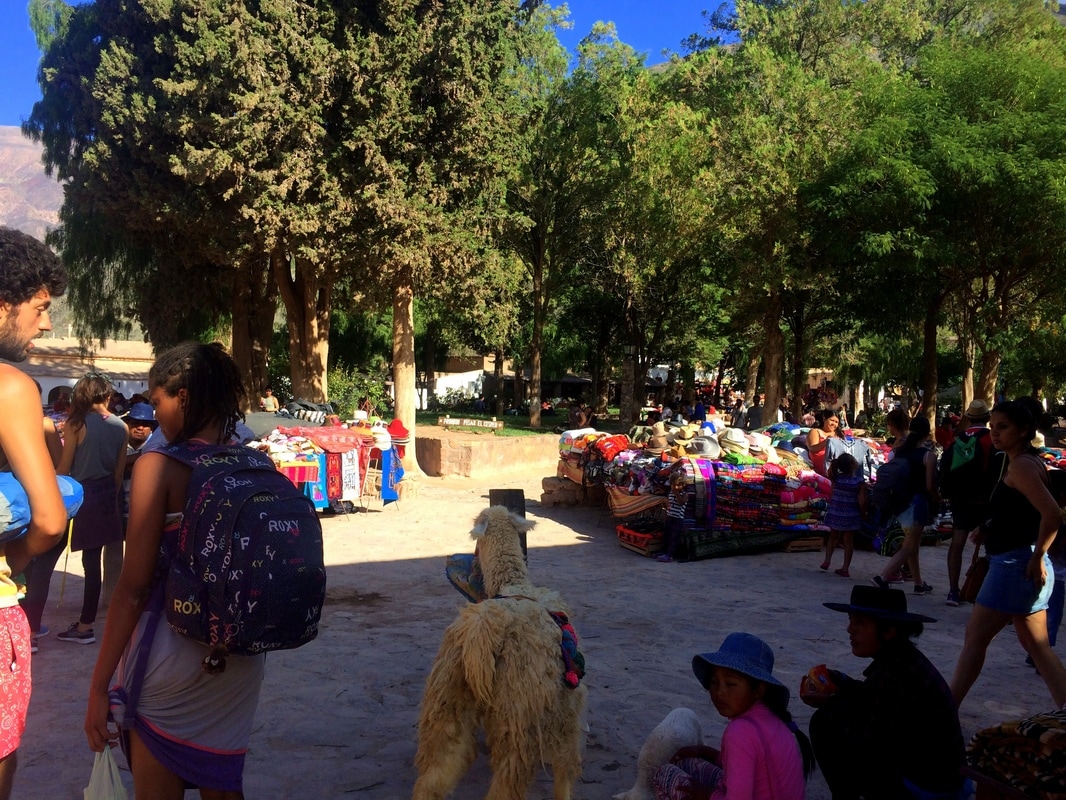 The location where I would spend time in the shades writing out my own line of thoughts while waiting for the people I grew to be quite fond of: the two film students and BFF’s Emiliano and the Venezuelan Xiomara who decided to temporarily tag onto my journey.
It wasn’t difficult to differentiate the immense appearance of this two-meter-tall attractive baseball player and the dark-skinned exotic beauty, both embellished with funky afro’s, in between the more indigenous-looking northern locals. Finally complete again we commenced our search for a cheap place to sleep, the hippie Camping Billy’s being an obvious pick. 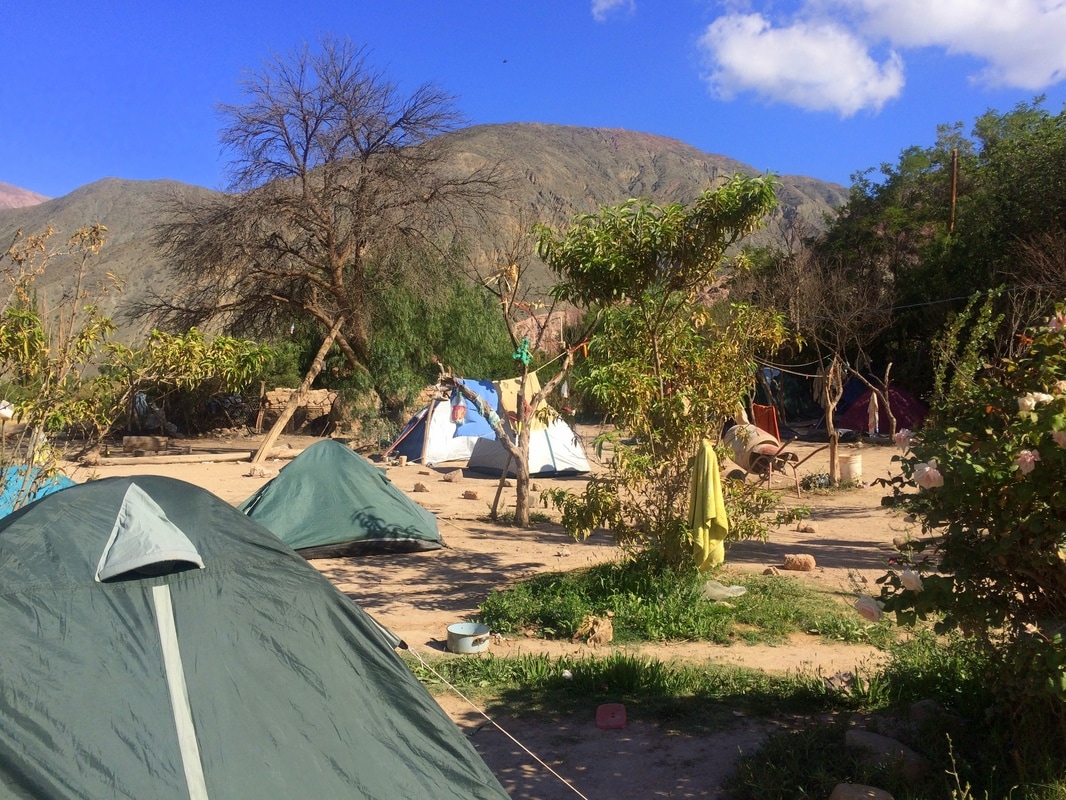 While pitching out little tents on the dusty grounds in between dream-catchers hanging from the dried out trees and stones daubed with idealistic messages Billy shook our hands. “It’ll be 50 pesos for the first night, 35 for the next… and if you end up staying more than 5, forget it, you’re gonna live here”, tilting his head to the dreadlocked people playing guitar and djembé, their half-open eyes betraying the interior of those cigarettes dangling out of the corner of their mouths.
​
If I learned one thing from Camping Billy, besides how to tingle along with improvised Argentinean folklore with a fork on a waterpipe, it’s how to survive with a minimum of resources. Didn’t I already do that the passed 2,5 years, you ask me? Right, I did get rid of all my material possessions to live with whatever I could carry on my back and learned on a daily basis how to make myself comfortable miles out of my comfort zone… but never before did I drink cheap wine out of a deformed pan which I shared with 28 people nor did I split a meal with this same group eating with ONE communal fork out of a skillet at 2:30AM. Miraculously I caught some virus that night, following me with a cough and running nose for weeks to follow, no idea how that happened.
After I accidentally crashed someone else’s tent and had thrown myself on a sleeping stranger (hey, don’t look at me like that, wine makes them all look the same), I crawled into my own sleeping bag at around 5AM… to be steamed out of the tent again at 7 by the unforgiving sun. As my only camping gear is the rickety tent itself I had spent the night on plain rocks without a mattress, which meant I did not sleep one single second. Bruised and with knees scratched open I crawled out again to take an ice cold shower to prep my mind and body for the hike around the Hills of the Seven Colors that had put tiny Purmamarca on the map. “Hike”, as it’s not more than a half-hour walk on a sand road circling just behind the village.   ​ 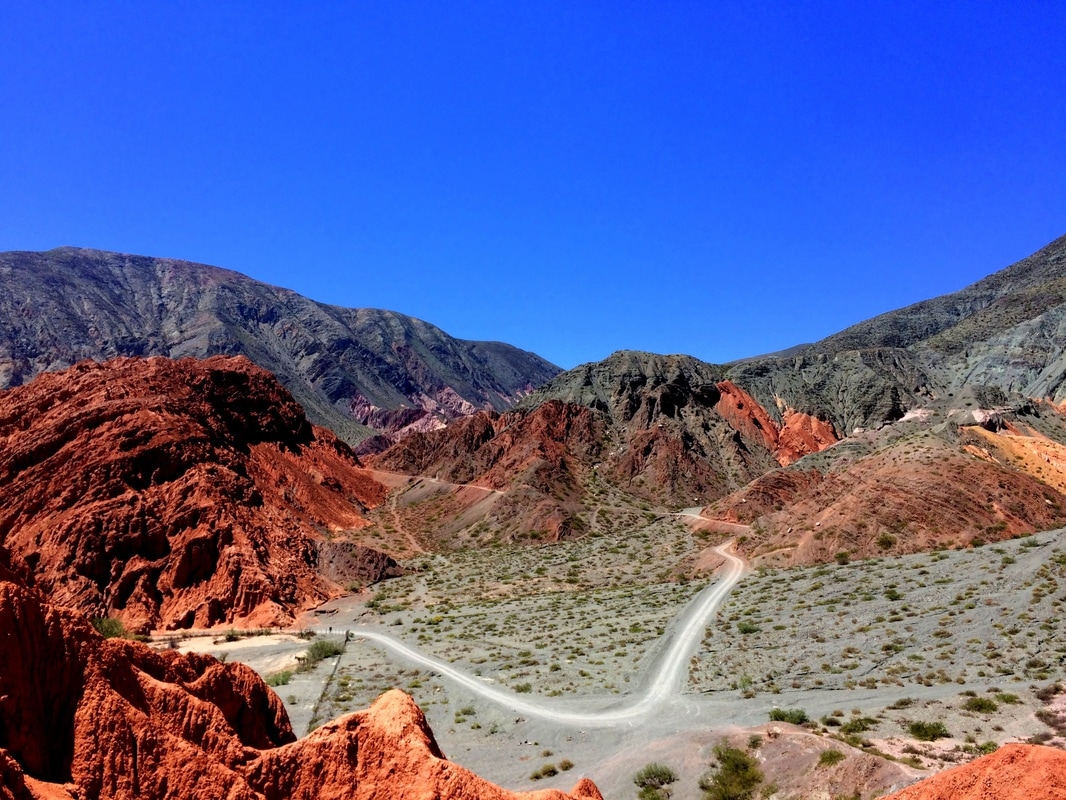 If you have any negative connotations with the word ‘erosion’ I think a visit to this little hamlet will do you good. As a shining prototype of the Salta and Jujuy provinces also this splendid stretch of dried-out rocks and colorful desert will tickle your senses with a mix of aesthetics and slight bewilderment. The human mind can create the most ingenious constructions and technically overcome the assumed impossible, but never can it put together such combinations, shapes and color palettes that nature had formed from the millions of years before our mere existence up until the day of today.   ​ 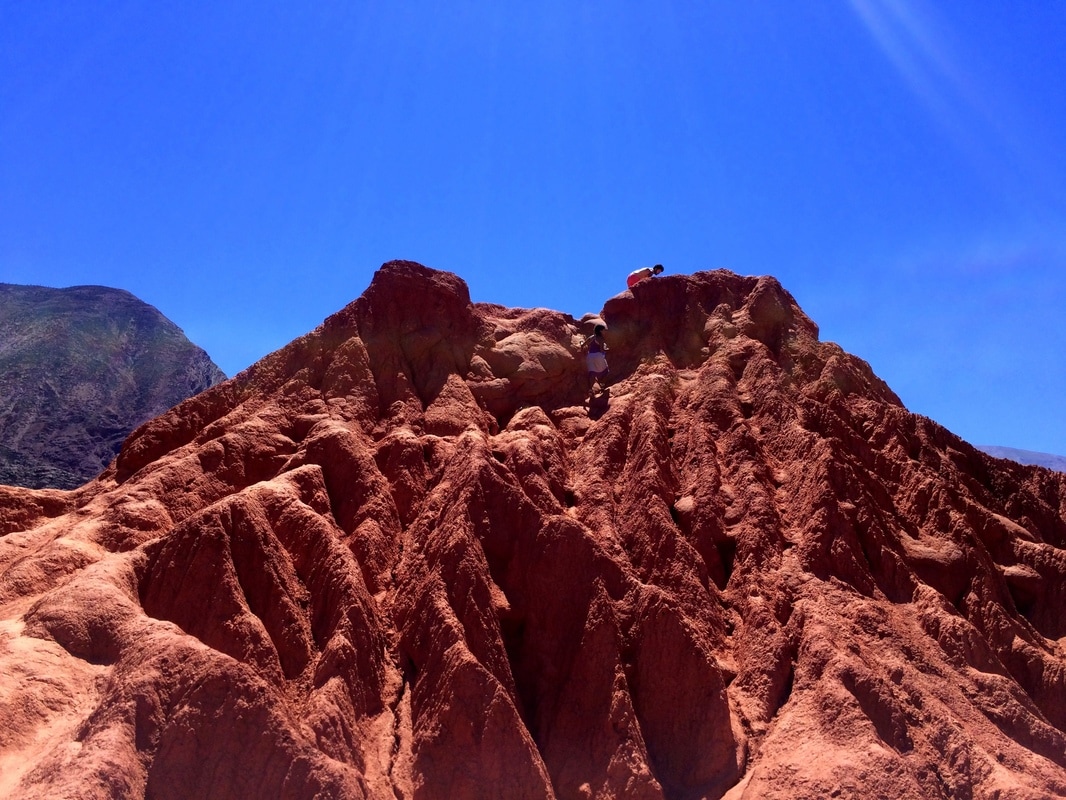 Its magnificence and grandness puts us right back in our place, as an attack to our own limitations and insignificance in the dimension of nature and the circle of life we’re just a tiny connection of (or a virus, as we tend to destroy everything). The red, the blue, the green, the black, the yellow, the orange and the pink I uncovered as the seven shades promoted are a lively example of the variety in stories the Earth tells you if you develop the right ears to listen to it. ​
Accumulating more people surrounding us we traced down the only slice of shade to do what people living in this country do: drink mate to oil the throat to keep the conversations flowing. Even when the heat tickles the mercury up to an alarming 40 degrees, hot drinks is what the Argentinean soul craves for. ​ 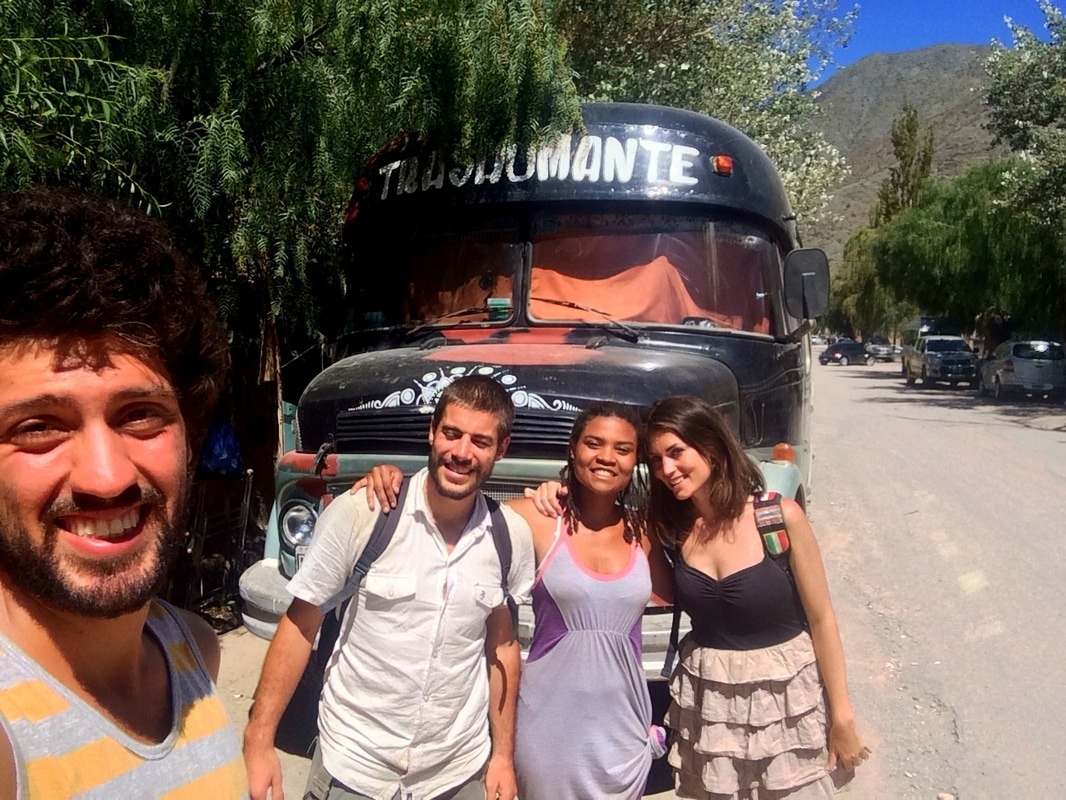 Purmamarca has been particularly nice to us. Would Tilcara treat us with the same courtesy?
​
The signs were good. Couchsurfer Diego had decided to free one hostel bed for me in his cozy Casa los Molles, located on a prime location and drenched in ‘buena onda’. My good-looking friends were to be received with open doors as well. You could say I have quite some hostel experience, big chance the total amount in which I spent some nights of my life is hitting the 4 digits soon... To say then that this is one of the cleanest and prettiest accommodations I have ever visited gives an idea of the feel-good level we’re talking about. ‘Boutique’ is the word of description I’m looking for.   ​
In a place like this the best way to celebrate the luck that brought you here is by live music of an excellent musician, vegan burgers and a serious wine overdose. The laughter of this evening will echo in my memories for months to come, but the dangerous proximity to Cafayate’s wine region and the therefore abundant supply kind of sealed the deal for the next day. If any morning AND afternoon will go into the books as The Slowest Day Ever these ones will have to be it. I slept, woke up to have breakfast, slept until lunch again, and after I had that down I decided to initiate a siesta until dinner. Good vibes seriously slow you down, but in my humble opinion life would be more beautiful if more days are like that. ‘Eat, sleep, fuck, repeat’ is a wonderful, almost poetic mantra to live by.  ​ 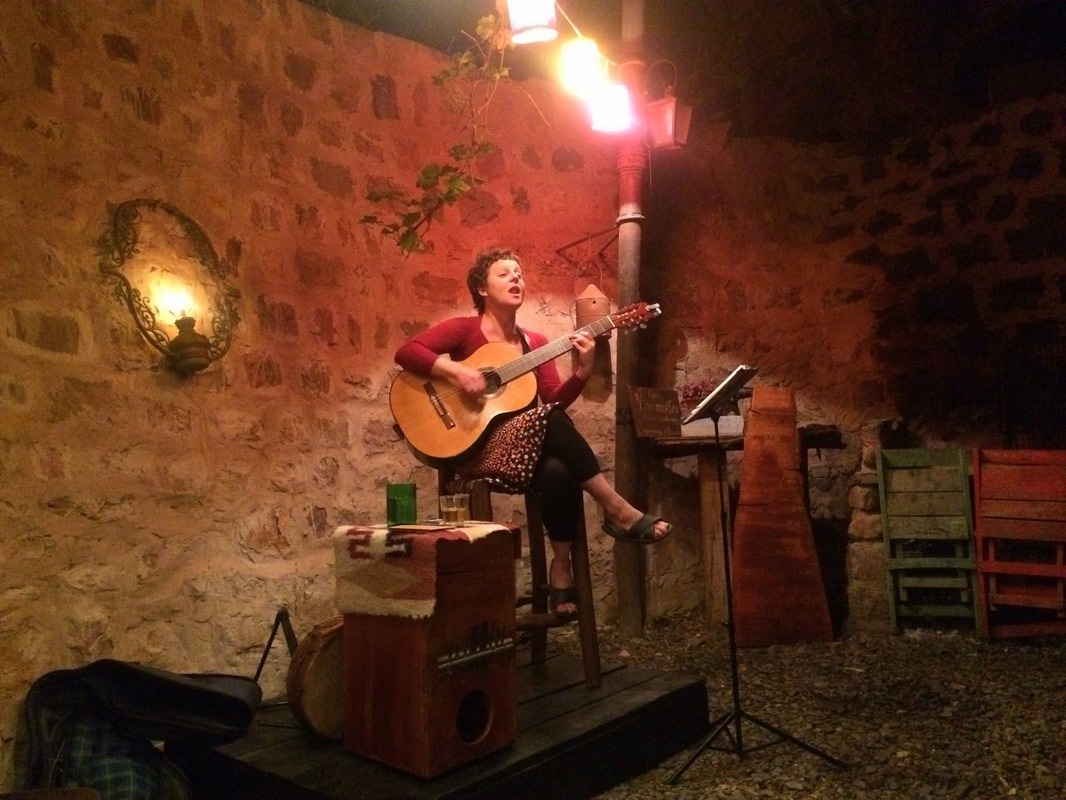 After we repeated the previous night day 3 was planned to be a more productive one, however. In the context of Tilcara, ‘productive’ can be defined as visiting a waterfall. Garganta del Diablo, the Devil’s Throat, is one of the big touristic outdoor trips this town has in store for its visitors, EXCEPT if you go with Diego.   ​

The good thing about exploring with a local is that they know the little detours the masses do not take, which results in having another equally beautiful fall all to yourself. I forgot to bring my bathing suit, but who the hell cares, if such delicacy presents itself in front of you you jump in with your clothes on, that’s a rule of life.      ​
Back in his old school clamorous pick-up truck Diego asked if we were interested to check out his house. He seems to basically live in his hostel (in fact he sleeps outside in a broken Volkswagen combi), but he built a little hide-out to escape from all the madness. In the middle of nowhere… literally, in his case. He stopped his vehicle in the middle of the road amidst a desolated mountain pass. We had to cross a dried river bed and climb up in between the bushes to indeed find a hand-built adobe house which would fit perfectly in one of my wildest dreams. No internet, no electricity, no central heating and a giant toilet formed by the wide surroundings where no one is to be found at all. Just him, a guitar, some books and an abundant supply of the strongest marihuana. The life this man has!

After having seen the splendor of this stretch of the Quebrada de Humuhuaca I can imagine why the Inca’s decided to settle down here. Around the 12th century AD the Tilcaras occupied the place that is referred to as Pucará, expanded to about 18 hectares in the 15th AD by the Inca domination of this area.  ​
This outpost full of houses, workshops, rite buildings and tombs was deserted once the blood-loving Spanish submitted the locals at last, after years of stubborn resistance. Up until today the remains of the glory days can still be appreciated, which is exactly what we did.  Not only ensures submerging in ancient history the necessary intelligent trigger, the views from this abandoned fortress are the holiday snapshots you’re after.

Our last night on the grounds of the Molles I lay amidst the party, feverish and wrapped in a sleeping bag while everyone celebrated and danced around me. Every now and then I had to make a tiny sprint to throw up whatever I had put in my mouth, but I refused to leave the social scene.
​
I didn’t want to miss one single thing of Casa los Molles’ magic. It’s that good.
Purmamarca bus schedules (accurate in Feb 2017): 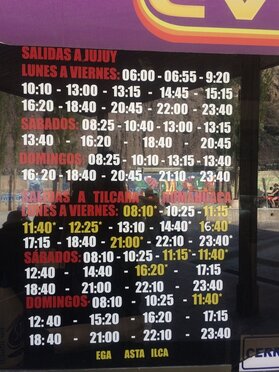 In order to support the travelers’ community, I spend many hours per week to adequately document all information and advices for prospective visitors, accompanied by a (hopefully) entertaining insight into my personal observations and experiences. This service is and will remain free. However, if you voluntarily want to make a contribution and support my travels and thus the creation of new stories and information supply, here is the button you’re looking for:
Donate
Related:
- Go to the Argentina Page for more blogs and hitchhike adventures!
- Uruguay's hippie beach spots: Cabo Polonio & Barra de Valizas
- A journey through the mind with ayahuasca [Peru]
- Vegan food and tarot-readings in Minca, Colombia
- The hippie settlement of San Marcos around the Atitlan Lake, Guatemala
​- Wannabe a hippie? Head to Tulum, Mexico
​- An independent hippie-republic in the center of Copenhagen [Denmark]: Christiania
​- An independent hippie-state in the center of Vilnius [Lithuania]: Uzupis