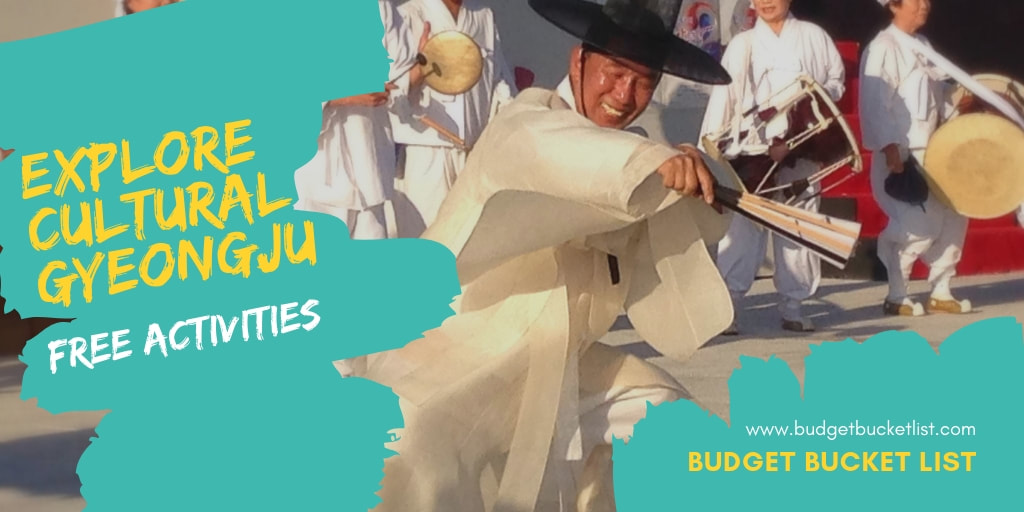 I was getting so comfortable under the city smokes of Busan that the rest what South Korea has to offer almost slipped my mind... but a rolling stone gathers no moss. So I brushed off that cloud of comfort zone and started packing, my solution for everything.

I rolled out a dusty yellowed map and randomly threw a dart to establish my upcoming itinerary... at least, I wish that’s what I did as that sounds way better for the story. The 2018-version of me opened Google Maps and let a blind mouse click determine the journey. Digital nomads, sigh, a regression of the adventure-seeking wanderers if you ask me...

Gyeongju. The letters danced before my eyes. Like someone aimlessly threw a handful of Scrabble stones on the table. I was going to a city I couldn’t even pronounce [up until the day of today].

Little did I know I just won the travel jackpot.
Gyeongju, a city seldom mentioned in the western tourist logs, but once the administrative as well as the cultural and religious epicentre of Korea. The Silla clan established their position as rulers of the south-eastern part of the peninsula in 57 B.C., erecting Gyeongju as their capital. After a prolonged period of struggles with rival kingdoms, they at last defeated their opponents in the 7th Century. The Silla Kingdom continued to reign over the lion’s share of the peninsula until the 10th century, which proofed more than sufficient time to erect an impressive collection of palaces, temples, pagoda’s and fortresses... all of them, surprisingly enough, enduring the test of time.

While carrying my ponderous torture machine of a backpack through the streets of the inner city I promptly noticed how modern constructions framed with flashy neon were interspersed with traditional buildings, their recognizable traditional roofs full of color and crafty competence sticking out in between grey concrete. Odd green landscapes of aerial tombs* alternated with the even odder Korean phenomenon of love hotels.**
* Traditionally, in Korea one didn’t dig a grave to bury the casket, but left it overground and constructed a hill around it. Royal family tombs, like the ones in Gyeongju, forming quite impressive mounts.
​
** As Koreans generally don’t move out of their parent’s house up until marriage, the act of intimacy is generally moved towards the pay-per-half-hour “love hotels”, also popular for cheating.  Generally designed with sensual décor and private car-hiding parking, these businesses very much resemble the Argentinean concept of “telos” (sex hotels). Their slogans to lure the horny crowds in are rather hilarious: “Yummy sexy time”, “hot hot happy”, “experimental love living” are only a few of the treasures I uncovered.


Eager of the sightseeing ahead I jaunted towards the house of True Park – the local artist and surf-aficionado who was generously opening his house for me – when a big bang and rumbling thunder made my plans go to pot in an instant. A typhoon, just what my cultural getaway needed! But fear not, when life says nay a kitchen door opens (a proverb I just pulled out of my ass). Luckily, my host appeared not to only be an artist, surfboard-designer and the awesomest man in Gyeongju, he also lived the career of a cook. *angelic voices singing from the sky*

Veganized TTeokbokki, Gimbap, Kimchi, Haemul Pajeon, Dumplings, Noodles, Bibimbap... a lot of good stuff happened in that kitchen. Every cloud has a silver lining.
And if that wasn’t enough, my old sweater got a full upgrade once True hand-printed one of his designs right on the fabric.


A day and a half later, when the Gyeongju weather situation made a 180, sightseeing was back on the agenda!
​
​From free to cheap:

Doesn’t sound like a cheerful day out, fair enough, but it is the highlight of Gyeongju’s sightseeing circus. The bizarre burial hills form the key to ancient history, boggling the mind with wonder. Go-to’s are the Daerunwong Burial Ground, as well as the Nodongri and Noseori Grave Parks. 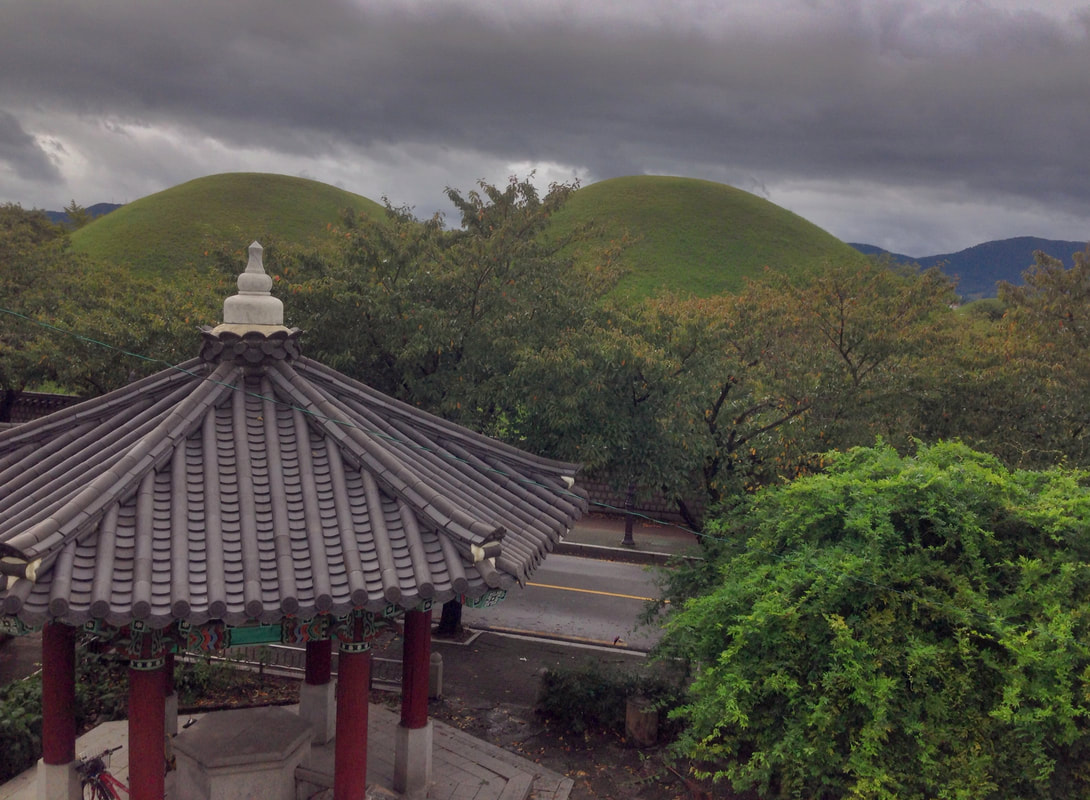 Whatever the Silla-gang builds simply looks flash. And why choose between quantity or quality if you can have both? The Woljeonggyo Bridge, Anapji Pond, Bomu Lake, Cheomseongdae Observatory, Banwolseong Fortress (with its Seokbinggo ancient ice storage)... all splendid, all free!

If you have a few wons to spare, however, I recommend to have a peek at the Donggun Palace and the adjacent Wolji Pond. It’s nothing you’ve never seen before, at least not if you’ve been travelling in Korea for a while, but it’s ridiculously picture-friendly. And ehm, psssshht, I had a look around for ya and noticed the gates bordering the flower fields on the photo below are incredibly low and climbable... just gonna leave that piece of information here for whoever picks it up.
Museums (free)

Gyeongju equals a cultural getaway, there’s simply no way around it. Luckily, the most prominent museum has no entrance fee whatsoever. The Gyeongju National Museum features broadly everything that ever happened on the very grounds you are standing on, from dinosaurs to Silla. Overall it’s just very well done, the original royal artefacts such as the iconic crowns being worth your precious time. Another freebie is the Gyochon Traditional Village, displaying the Korean life that once was.

That said, one could argue Gyeongju is an open-air museum in itself, a mere stroll around its alluring streets throwing you right back into history. 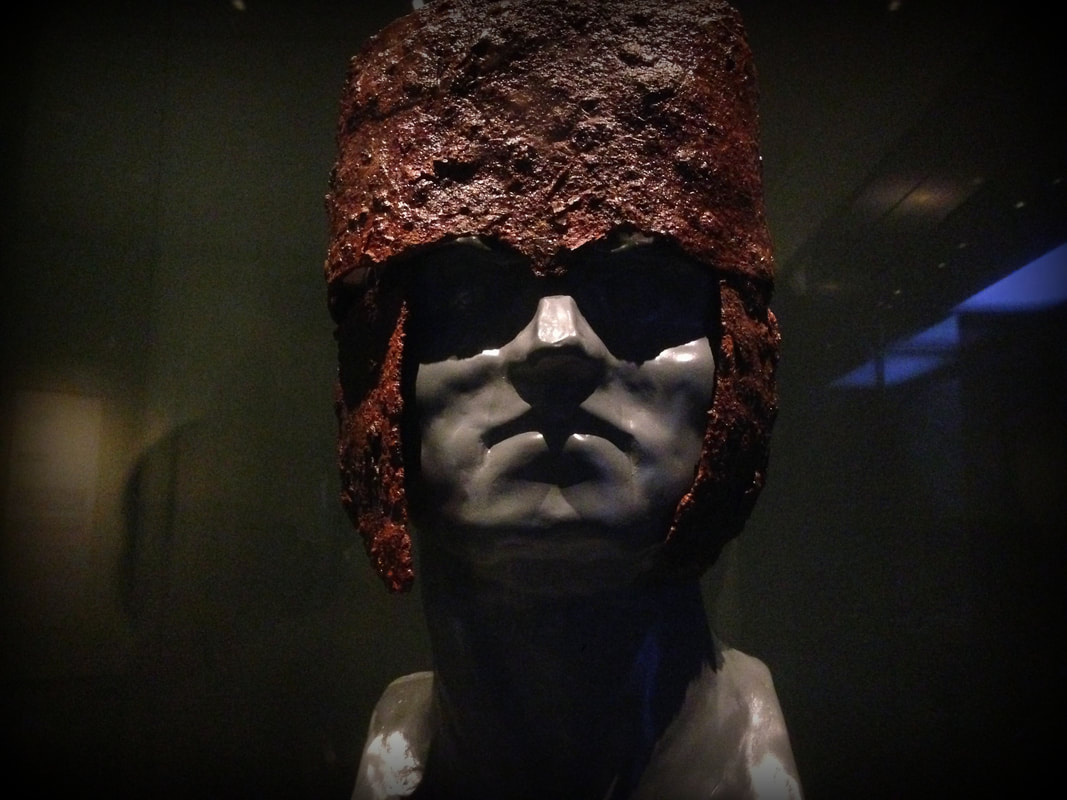 You don’t need to go to Gyeongju to see temples, but like everywhere else in Korea: they’re there. Buddhism stroke hard here, especially after the Silla Kingdom adopted it as state religion. And they mean business: them Buddhists charge you to see the statues of the man that advocated humbleness. But pretty sure they cheer up your Instagram feed, if that’s what you’re after. On a spiritual note: If you feel like actually staying in a temple overnight, you most definitely can here. The Golgulsa Temple is one of the more famous ones on a national level, be it with a hefty price tag. Other daytrip options are: The Gameunsaji, Bulguksa, Girimsa, Gameunsa, Bunhwangsa and the Hwangnyongsa Temple, as well as the Seokguram Grotto.

If you’re hotter for Confucianism, the Gyeongju Hyangyyo Confucian School is your place to be. 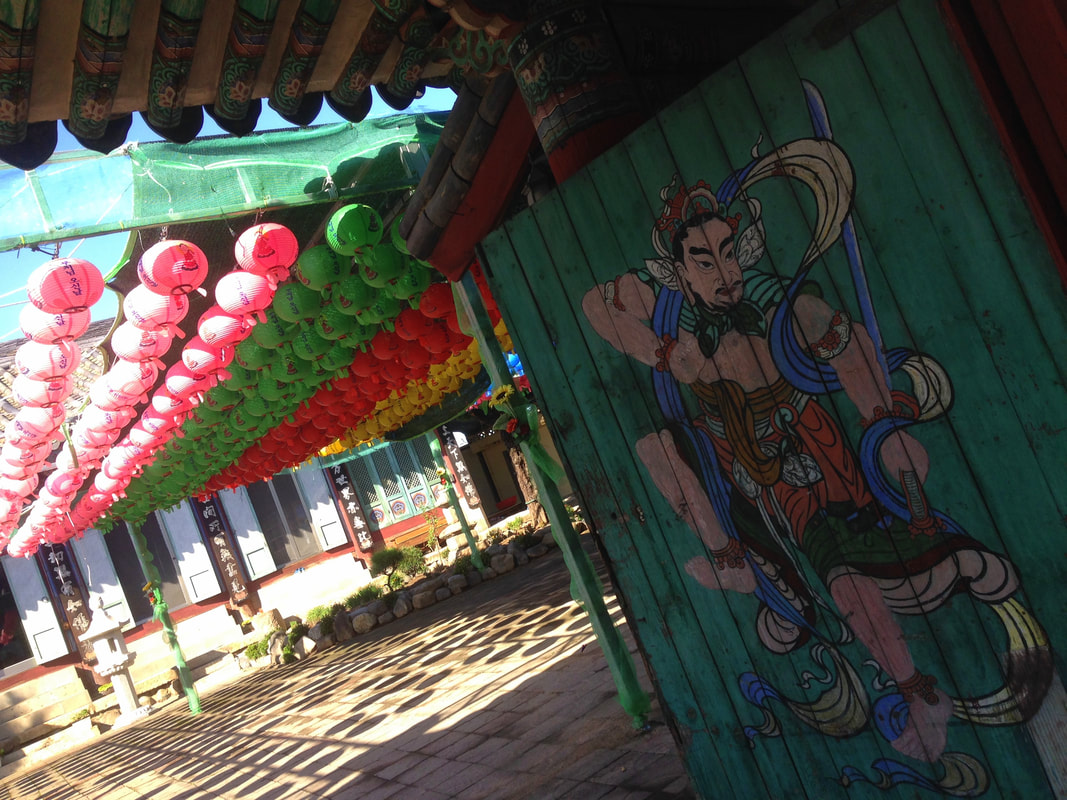 Talking about Buddhism... one place recognized as the most sacred of all is Mount Namsan, part of the bigger Gyeongju National Park (hiking map in photo slideshow below). Nature is never far away in South Korea and on this occasion it’s splendidly combined with the work of the most gifted artists the Silla Dynasty could attract to embellish its most precious mountain. Time to tighten op those boots!

You’re going to have a blast in this place on the most boring Sunday afternoon... but festival season is the time it’s truly going off. As luck seems to follow me on my journey I arrived right at the Gyeongju Cultural Festival, celebrating all those wonderful dances, theatre displays, crafts and traditions that give Korean history its abundant colors. I sang, I danced, I laughed, I jumped...
I celebrated Gyeongju and its historic treasures flawlessly flowing into modern madness. Time ticking back and forth in its constant context of relativity. ​