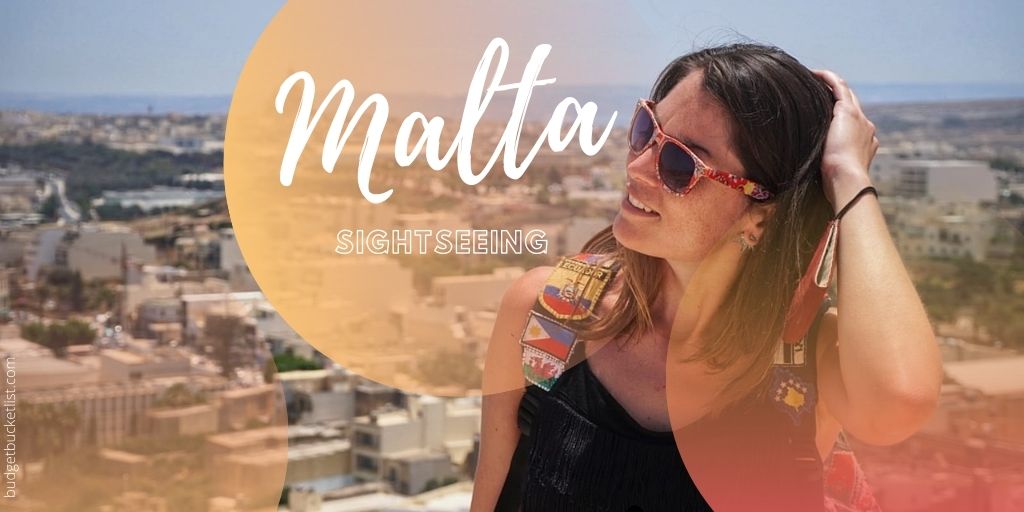 You might travel down to Malta for some Mediterranean beaches, to practice adrenaline-loaded water sports, or to engage in a long and challenging hike… Those are all magnificent ideas! But fair enough, a holiday wouldn’t be a holiday if you wouldn’t also throw some proper sightseeing into the mix. Especially in Malta: an intriguing, strategically situated mini-country where far reaching history and a rich blend of culture perfectly comes together. Visiting Malta’s museums, heritage sites and natural treasures equals educating yourself about the essentials of European history in the most engaging and entertaining manner. 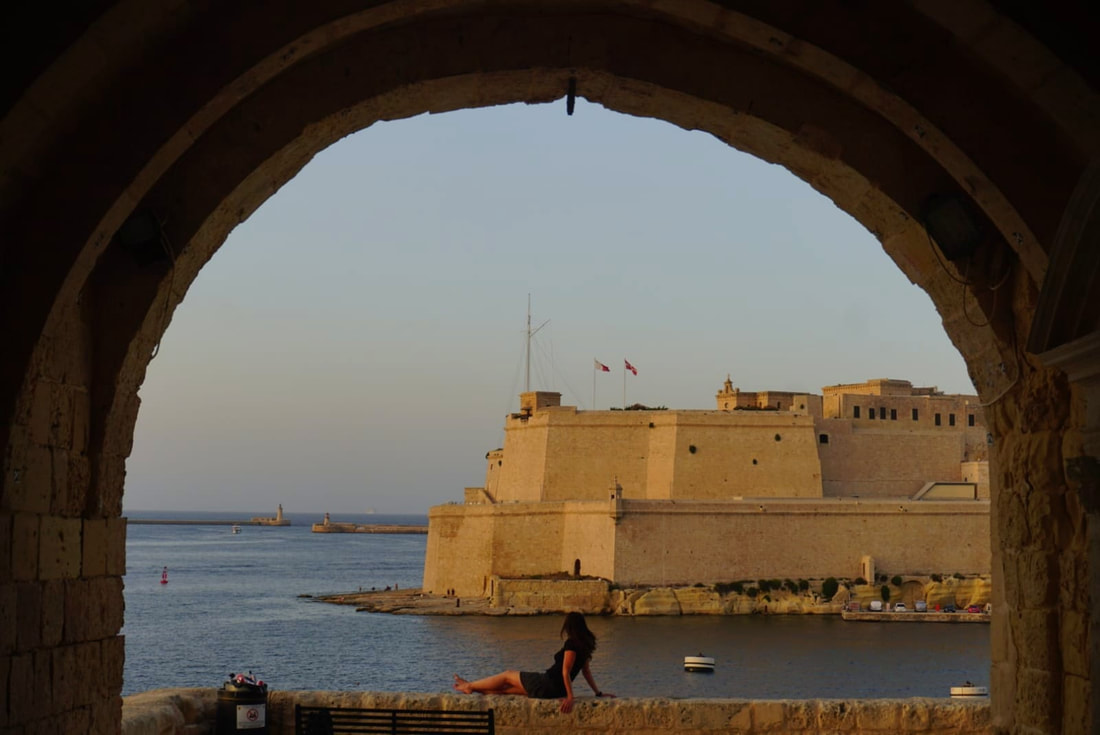 Too busy to read now? No problem, save it for later!
​Save on Get Pocket | Save in Browser Bookmarks| Save on Instapaper
The Essentials

The history of Malta dates back to 5900 BC… which means there’s a whole lotta generations of people who blew out their last breath on this tiny patch of land. We’re not talking about simple graveyards anymore, Malta contains proper necropolises – cities of the dead. Some of these sites are open to visitors, allowing us mortals to descend into depths of earth to wander through the dugout catacombs. I visited the St. Pauls Catacombs, the most ‘popular’ boneyard of the list, twice and enjoyed engaging in its Phoenician-Punic background and learning about its ancient (Christian, Pagan and Jewish) burial traditions. Not to mention the grim pleasure of getting lost in between actual tombs, imagining the macabre scenery of foregone days. As I’m a bit of a sick f*ck at times I couldn’t hide my disappointment of not finding human skeletons in there (or better: actual embalmed corpses, like in Naples for example), but I nevertheless recommend this morbid day trip.

To stay on topic: Paola’s Ħal Saflieni Hypogeum is thought to have served as a necropolis from 4000-2500BC as well, be it a very special one! The structure, considered to be one of Malta’s most well-preserved ones, was discovered by accident in 1902 during construction works. Archaeological evidence indicates that the Hypogeum was hidden for thousands of years due to a demolished surface structure that initially marked the entrance, but subsequently covered its interiors for centuries to come. Excavations were promptly initiated, exposing valuable items such as burial objects and human remains of an estimated 7000 people. The truly remarkable underground structure seems to have originated from a natural cave, which was expanded and widened over time by the act of cutting directly into the limestone rock with stones and bone tools… which makes this skilfully crafted formation all the more incredible to be witnessed. The burial chambers spiral down to three distinctive levels, the middle level also containing the compartments popularly known as the Oracle Room and Holy of Holies. These have roofs carved into the rocks, characterized by three rings of stone each overhanging the one below, resembling the corbelled roofs of the above-ground megalithic structures to be found elsewehre on the island. A UNESCO World Heritage Site for a reason!

Budget note: In order to preserve this site, a maximum of 80 people is allowed per day (in combination with a strict microclimate regulation system). This results in steeper entry prices: €35 adults / €20 students / €15 children - accurate per 2021, double-check current entry prices here. 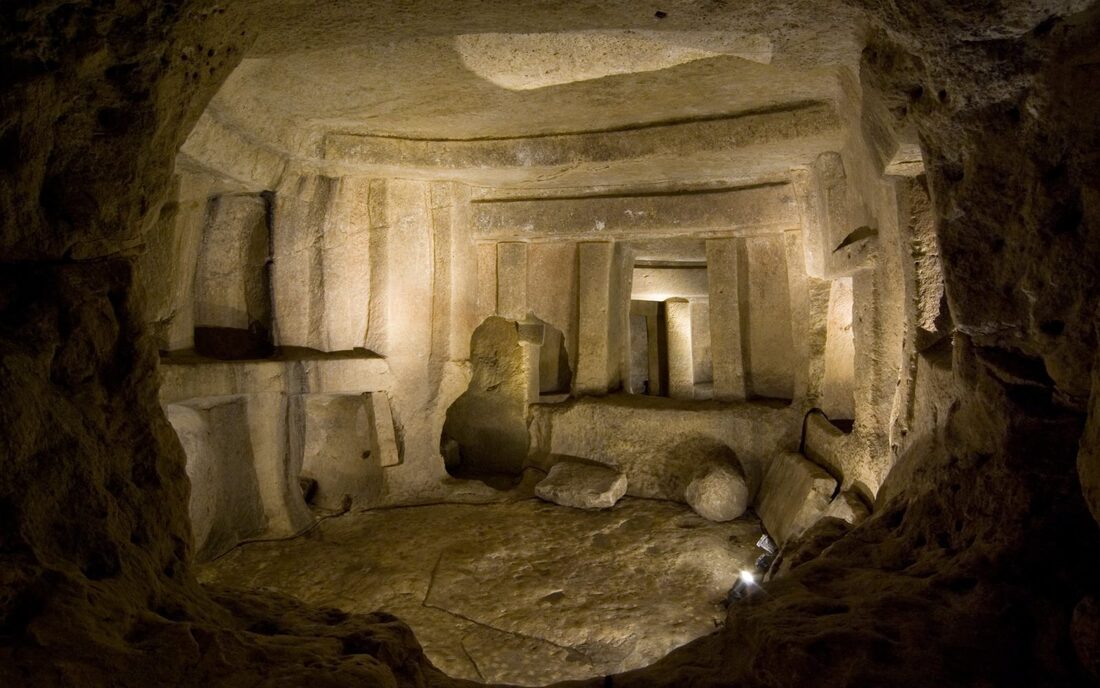 Photo credits - Private photography not allowed inside of the Hypogeum

From cities of the dead to preservation of the living: Malta is scattered with forts, combined with a vast number of citadels, batteries, watch towers, entrenchments, and walled cities. It all trickles down to that sublime strategic position right in between Europe and Africa, Christianity and Islam, right in the middle of all naval access ways… a very desirable harbour indeed. The first defence works are believed to date back to the Bronze Age, with further developments made by the Phoenicians, Romans and Byzantines. However, the fortifications were greatly improved and expanded with the arrival of the Order of St. John (1530-1798), who rebuilt Fort St. Angelo in their back-then capital Birgu / Vittoriosa, and erected Fort St. Michael in Isla / Senglea and Fort St. Elmo in Valletta… All playing a crucial role in the famous Great Siege of Malta.

Fort St. Michael blends in with the city  of Isla / Senglea and is free to visit, while St. Angelo and St. Elmo require a separate ticket (or can be accessed with the Heritage Malta Multisite Pass). If you have only time for one, I recommend St. Elmo due to the integrated war museum shedding light on Malta’s turbulent history in a truly clear and comprehensive way. Another interesting one is Fort Ricasoli in Kalkara, where Troy, The Gladiator and Game of Thrones were filmed (interior closed for public, to be admired from Rinella Bay). To combine a fort day-trip with some physical exercise: the Victoria Lines is one of my favorite hikes of Malta!

Also before Christianity made a loud and strong entrance to the island of Malta, religion always played a crucial role on these grounds. What makes these megalithic, prehistoric temples so incredibly interesting to visit, is the fact that some of them belong to the oldest known structures on Earth. On Earth!!! And you can see them in Malta! No wonder that four of them were recognized as World Heritage Sites by UNESCO, mentioning the Ġgantija Temples, Ħaġar Qim, Mnajdra and Ħal Saflieni as unique architectural masterpieces. Personally, I found indeed these four sites (Ħaġar Qim and Mnajdra are bundled in one complex) the most intriguing and well-preserved, accompanied by informative displays and audio tours explaining the historic background. However, if you want to go all in, also Borġ in-Nadur, Tarxien Temples, Ta' Ħaġrat, Ta'Skorba, and Ta’Bistra are open to the public and included in the Malta Multisite Pass.
Mosta Rotunda

I don’t think you can walk for a minute straight in Malta without bumping into a church eventually. The Maltese are hardcore Catholics. I’m fairly sure I have never seen such religious fanaticism before, and I have travelled all the missionary hotspots and their origins. To list all churches on the islands will result in you scrolling down this page for a handful of minutes, so I will just list my favorite: The Rotunda in the pleasant town of Mosta, built to match the Pantheon of Rome… my favorite there. Its claim to fame is the ‘holy’ event of a Nazi aerial bomb plummeting to its dome, but failing to explode – interpreted as a ‘Miracle of God.’ Hm, okay. I’m just here for the architecture. If you have a chance: visit the tunnels and bomb shelters under the church.

A Wiki-list of all churches in Malta, if you want to go all out. Another fun one is the Tal-Virtu Satanic Chapel, further described in my Malta Hikes Article.
Wine

Yeah, history is nice and all… but what about the viticultural history? And present! Wine, I’m talking about wine. It’s a downright crime against humanity to visit Malta without sipping down a heavenly cup of local goodness. A few thousand years back in time, the Phoenicians already knew what’s up and established the first vineyards known in local history. Arab domination didn’t do much good alcohol-wise, but luckily the Order of St. John (that beat Ottoman invasions) revived the wine production by importing vine-cuttings from Europe. The current local wine production evolves from two grapes, both originally from Sicily: the white Insolia / Ghirgentina and the red Mammolo / Gellewza. Maltese white wine is typically dry and characterized by a fresh, balanced taste, while the medium-bodied reds are characterised by a rich, deep yet gentle flavor.

There are four main players on the market (Delicata, CassarCamilleri, Montekristo and Meridiana), of which I have one loud and clear favorite: Meridiana. The first time I drank a glass of their Bel Syrah (quickly turned into an entire bottle) can be defined as an instant when time shortly stood still. A tiny little me-moment… a closed-eyed-dialogue between my senses and those fantastic peppery yet silky tones slowly elaborating and evolving with every sip. Shortly after I explored their Melqart Cabernet Sauvignon & Merlot and the no less than heavenly Nexus Merlot. A visit to this winery was a downright necessity, and in my case turned into a 5-hour celebration. A must-visit for every wine lover.

Book a tour and tasting via this link. Skip breakfast and lunch in advance: The tasting is accompanied by an incredibly well-filled and generous snack platter, enough to feed a family of five for a week.

From war and religion to the arts. Even though less profoundly present in Malta, they do host one very interesting museum: The Muza. Besides paintings of Dutch, French, British and mainly Italian descend, the collection includes sculptures (mainly from the Maltese artists Gafa and Sciortino), silverware and ancient furniture. This museum is included in the Heritage Malta Multisite Pass and located in one of the most vibrant streets of Valletta. Other smaller-scale art collections can be admired in the Wignacourt Museum, Jackie’s Modern Art Gallery, the Spazju Kreattiv, and the Valletta Contemporary Art Gallery. Malta’s local scene of the performing arts is centred around the Pjazza Teatru Rjal, which has their upcoming program published here.