Download File
An edited version of this post can be found on STEEMIT: Upvote me to support my travels for free!
​
“The Gold Port and 4th largest city in the nation isn’t necessarily that exciting most of the year, but its Carnaval is the 2nd biggest in the world after Rio’s, and is both an amazing cultural experience and one heck of a party!”, I read.
​
Well, guess what time of the year it was… After I finished my language course in Medellín on a Friday, I immediately walked to the bus terminal to take a 15-hour night bus to the Caribbean. I simply love it when life works out perfectly. 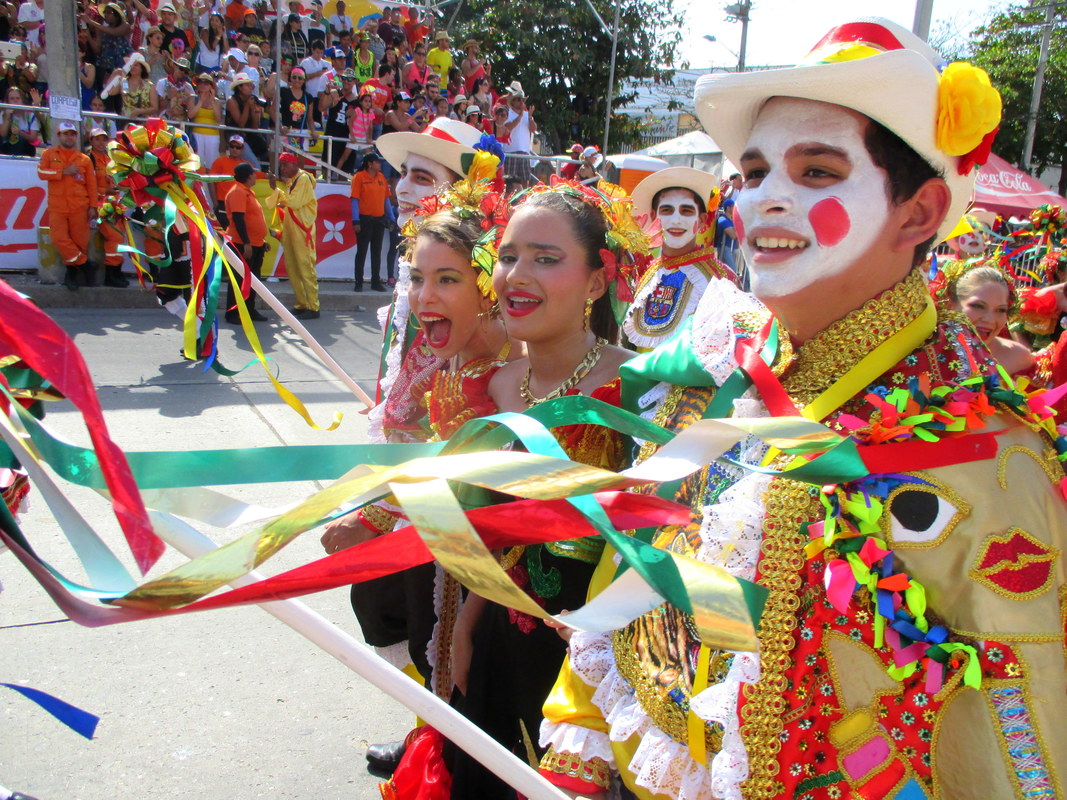 Carnaval is not a new phenomenon for me, it’s by far my most favourite part of the year in the Netherlands.

Dressing up to make all class differences disappear, drinks that keep on coming, dancing with your friends ranging from 7 to 70 years old, parades… what more can you possibly need? 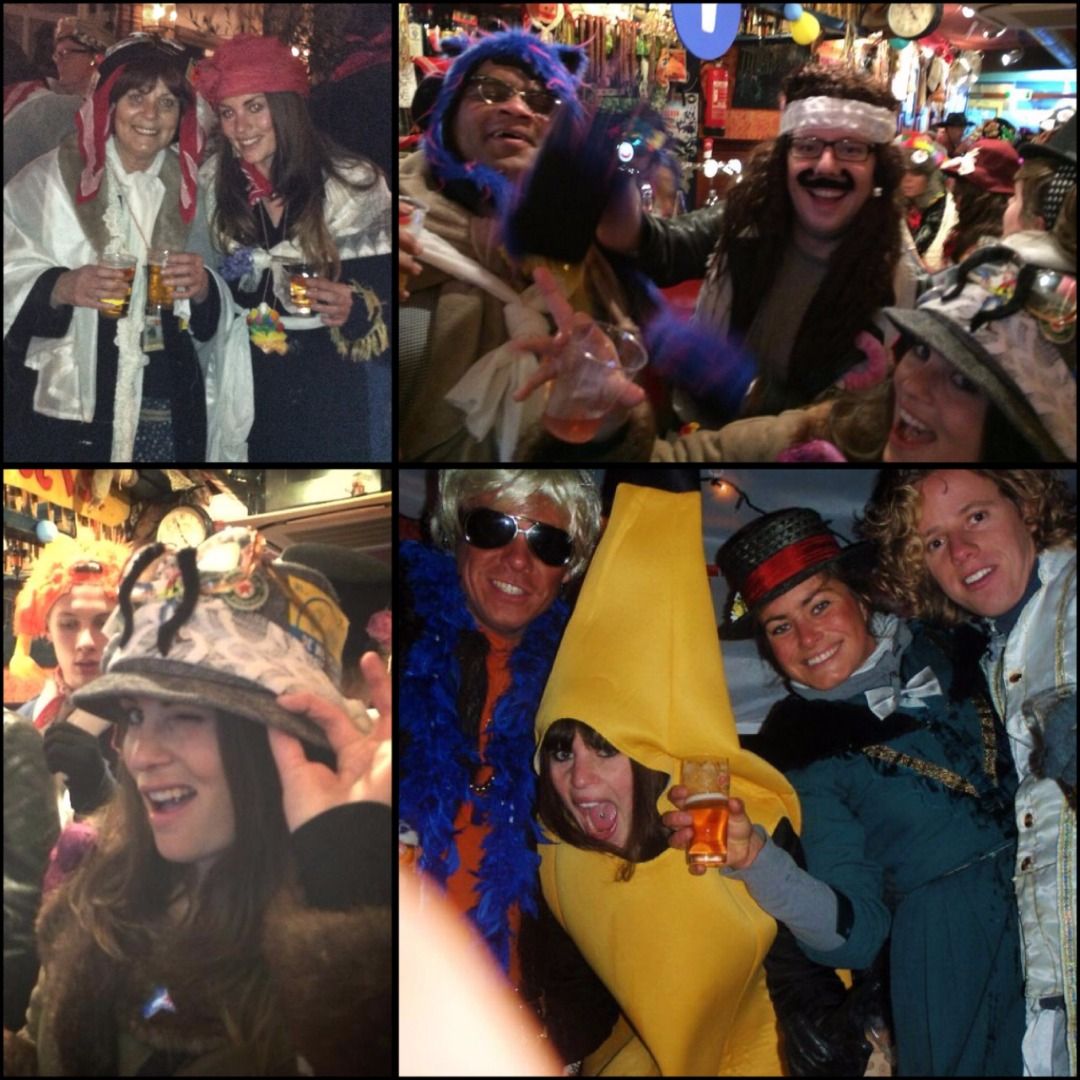 Well, Barranquilla was going to show me that soon enough, I could not even imagine the wild things that were awaiting me.

Once I arrived at the Barranquilla bus terminal Couchsurfer Milena picked me up and drove me to her cosy home. Not only is this way of travelling more special and authentic than staying in a hotel, I also simply didn’t have the cash to pay $150 a night during festival-period. I Couchsurfed all over the world and had the pleasure to invite people from all parts of the globe into my own house, but for some reason I was a bit weary of doing this all alone as a young woman in South America. Nevertheless, the heart-warming replies were overwhelming. As I assumed all couches would have been taken already I sent out about 9 requests. Every single one was accepted! Wow! I choose Milena as she seemed the sweetest person in the world, and a stay smack-bam in the city centre with a loving family sounded like a safe bet.
​
* This marked the beginning of another 2,5 years non-stop Couchsurfing in Latin America 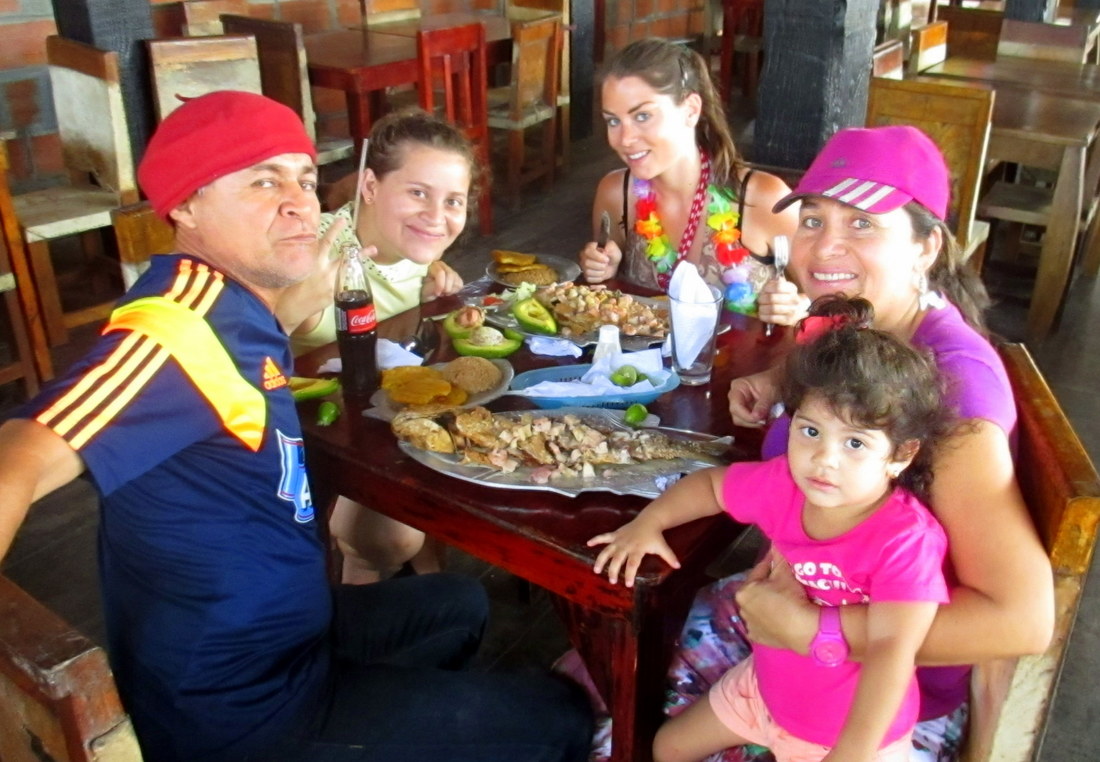 Although this teacher spoke perfect English, she asked me if I preferred to speak in Spanish? Por supuesto, after a month of studying this is my moment to shine! The subjects we decided to talk about weren’t the most superficial ones: While I was baking an Italian-Dutch lasagne we discussed everything from marijuana legalization to cougars, and from civil rights of homosexuals to the right-winged Colombian mafia that threatened her family during her childhood. Colombian people tend to focus on the positive side of life and ignore the black pages of their history, so when someone is ready to give a first-hand report about this dark past I am more than greedy to take in that information.
​
After I explained ‘our’ carnaval she laughed about how boring that sounded, and assured I won’t need that much clothing here in the sweltering heat of the Caribbean.
As I was not too excited to cover my privates with just some feathers and glitters, I put on a colourful dress and walked to ‘La Troga’ that night. Having a little child, Milena needed to stay at home (which is exactly the reason I am on birth control), but as this is Colombia so friends were quickly made. The Troga neighbourhood was a MADHOUSE. Imagine around 10 people per square meter, all dancing the samba, rumba or bachata like stars. When Colombians dance they remind me of Michael Flatley: When this dude moves his legs seem to operate as a different entity from the rest of his body, which is the same here with the hips. Dutch gayboys can’t dance as loose and extravagant as the hetero’s here: Oh my! People hung off the traffic lights, climbed on each other's’ shoulders and sprayed foam over the rowdy crowd.

Street life is one hell of a show here!

hen I woke up, slightly hung-over due to the 50-cents-spirits, a delicious smell reached my nose. Milena was making me a traditional Colombian breakfast of eggs and platano ​(this was indeed in my pre-vegan era). You don’t need a fancy hotel to get 5* service. While enjoying this (for me) unusual meal I looked at Milena, her gorgeous husband Leo, her cute little daughter Lia, who had a smile so sincere and intense it gave me goose bumps, and their peculiar happy puppy Pochi. They completely accepted me in their house and family. ​​To me, this is what travelling is about: Feeling at home everywhere in the world, being one with the locals. It didn’t matter that I slept on the floor or woke up spooning Pochi, no one ever died from that. I wouldn’t want it any other way, luxury only ruins the true experience of local reality.

​Milena needed to babysit her baby, but gave me some pointers about where to celebrate carnaval that day. I didn’t care at all that I had to go by myself, as I meet people everywhere anyway. That day was no exception: When I bought some cheap lunch in the supermarket I ran into the Brazilian Renan, my former roommate in Medellín, and the German Matthias and Finnish Elena who I met before in Guatape. The world is one interesting network of coincidences. They all seemed to be part of the same tour group and invited me to hook on. 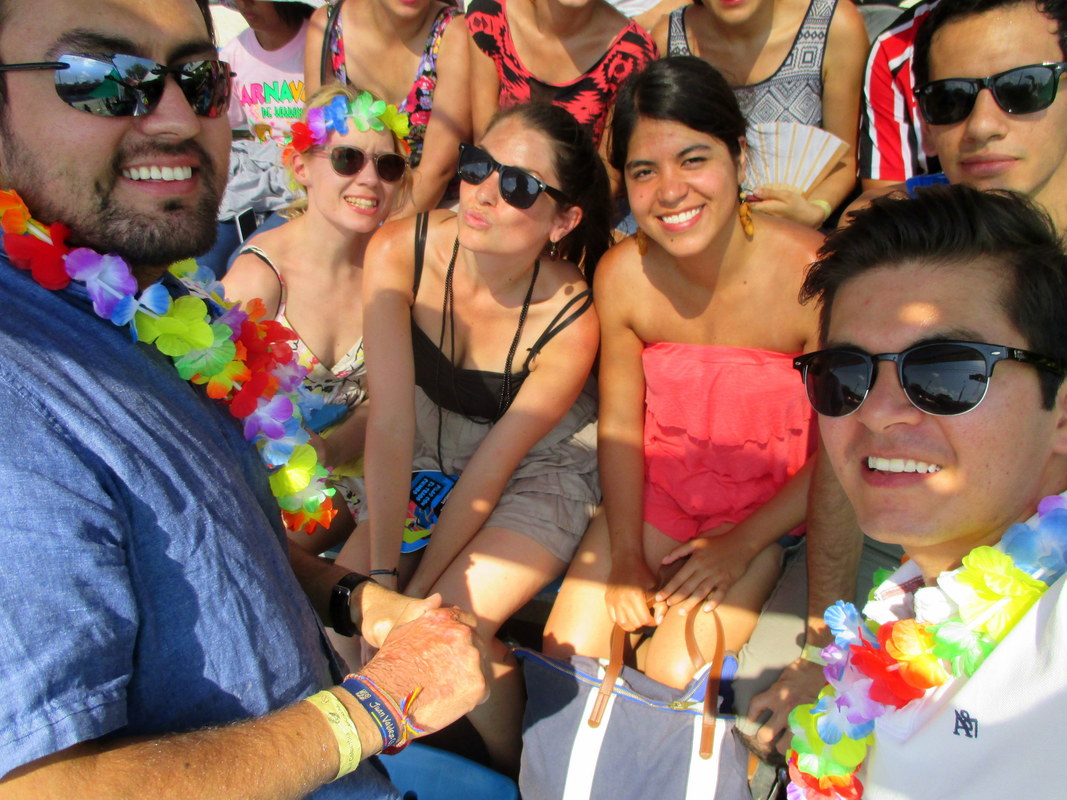 ​For 10.000 peso’s we all bought a 80.000 peso’s ticket from a street vendor to check out the huge carnaval parade. We were 1,5 hours too late so exactly on time in Colombia.
​
I had no idea what to expect, which is the best mental state to be in: I was blown off my feet!
​In the funniest, most breath-taking costumes thousands of people gave the loud audience something to cheer about. Being a group of tall, white gringo’s we clearly stood out in the crowd and attracted both people participating in the parade and being part of the audience, all waving and loudly welcoming us in their country. My hips refused to stop swinging, so that night we headed to Troga again with a bottle of rum in one hand, and some agua ardiente in the other. I danced until 4AM with the first blonde, freckled Colombian I ever saw. As this comes down to a total of 15 hours partying, you can imagine I was quite exhausted when I fell asleep next to Pochi again.
Unfortunately, the dog and the kid worked shifts to keep me awake. The family and party life don’t easily combine. In between the shouting and barking I felt urged to accept that I was going to have 3 hours of sleep in total, so I put on my sunglasses and walked to the festivities again. As the parade was quite a success the day before, I decided to see one again. I paid only 5000 peso’s for an 80.000 peso’s ticket this time, but I appeared to have bought the wrong one: a ticket for some kid’s parade. Nevertheless, the guards told my boobs that I could enter the big parade anyway.
​
I befriended the charming local Sindy who wanted to show me the real Barranquilla nightlife, and at the platform I hung out with a kind Colombian-American father who was showing his little daughter Sarah her roots during their holiday. 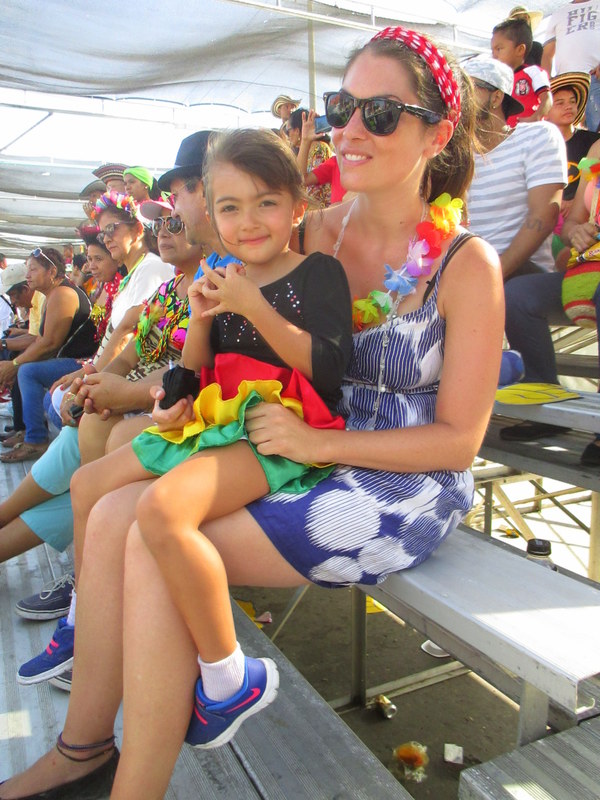 Then, 3 hours too late, the sound of music approached us… And there it was: Caribbean carnaval like how you see it on TV.

A celebration of the body. Semi-naked people, wearing shiny glitter g-strings and bright ‘n tight costumes in all colours of the galaxy, huge headdresses made of feathers, their sweaty bodies pulsing on the beat in the heat.

Suddenly an internal voice said to me: “This is really happening, this is your life”. I felt tears running down my cheek and started jumping, dancing and singing until all energy poured out of my body and became one with the Barranquilla Carnaval.
The last day of the festival I intended to go to a traditional celebration of a local Casanova. Apparently there once was a guy who had about 10 wives and girlfriends. He drank himself to death during carnaval and at his funeral all these widows first met. Since then people dress up like black widows on Tuesday and celebrate the life of this local legend.

However, I also wanted to spend some time with Milena so I joined her, Lia and her parents to a fish restaurant next to the Magdalena River. I prefer(ed) fish over meat, but this restaurant served such tremendous portions that the two of us couldn’t even finish one plate. 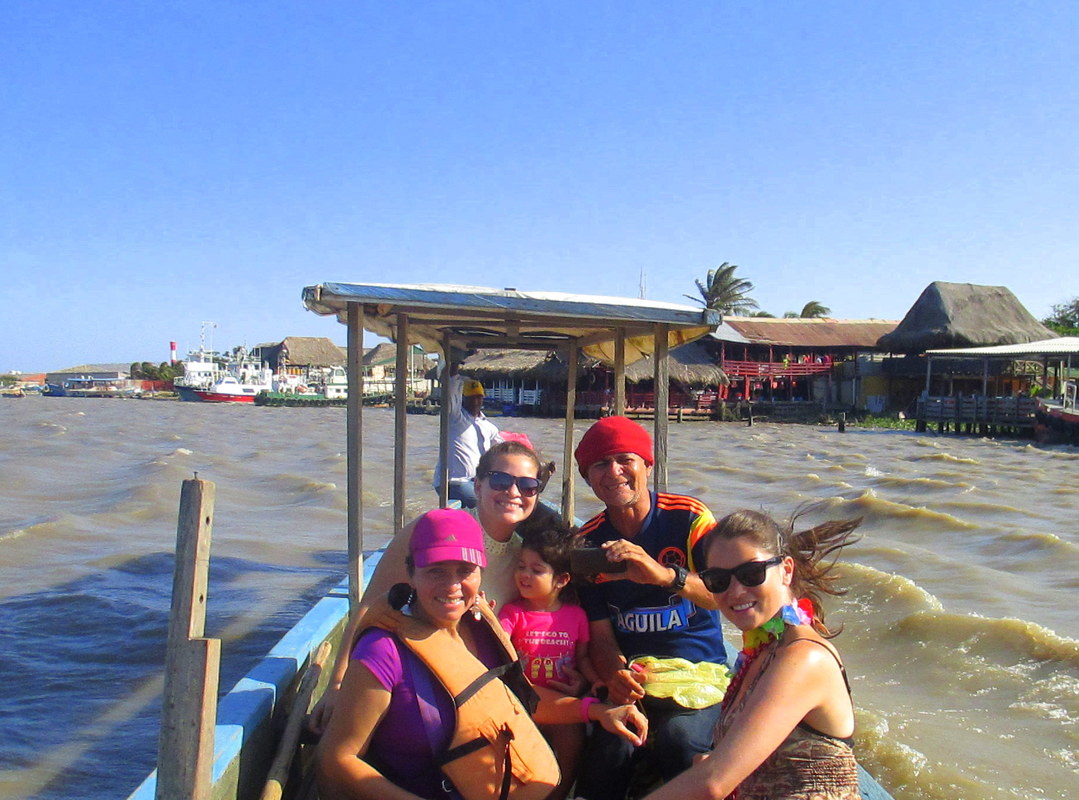 For me it was quite special to share both food and stories with a full blood Colombian family. Hardly being able to move we and our bellies climbed into a rattle-boat for a tropical ride on the river while Lia’s laugh echoed over the water.

​Then we drove down the narrow dirt road to the beach, where you could see the Río Magdalena on one side and the Atlantic Ocean on the other: Bocas de Ceniza. Pretty goddamn incredible, if you ask me.
​
While watching 3 generations running around in the sea with their clothes on, Milena’s father and I exchanged anecdotes about the South American countries we both travelled in. He filled his lungs with marijuana and concluded “Nosotros somos igual, somos hermanos.” I smiled at him and nodded… If all of us would realize that, there would be no war, no hatred. Sometimes a stoned Colombian sitting on a rock next to the Atlantic Ocean has more wisdom than all governments leading our nations.
In order to support the travelers’ community, I spend many hours per week to adequately document all information and advices for prospective visitors, accompanied by a (hopefully) entertaining insight into my personal observations and experiences. This service is and will remain free. However, if you voluntarily want to make a contribution and support my travels and thus the creation of new stories and information supply, here is the button you’re looking for:
Donate
Related:
- Going back to Barranquilla for a free Manu Chau concert
- Go to the Colombia Page for more blogs!​ Next on track: Cartagena, Santa Marta & Tayrona National Park, Minca and Palomino
- Christmas celebrations in Cali, Colombia
- Carnaval in Encarnación, Paraguay
- Carnaval in Merida, Mexico
​- Traditional folk dancing in San Cristobal de las Casas, Mexico
- Traditional celebrations in Humahuaca, Argentina
​- Traditional celebrations in León, Nicaragua
​- Puno Day in Peru
- Couchsurfing with a family in El Zamorano, Honduras
​- The smoggy capital of Malaysia: Kuala Lumpur
​- 10 typical Dutch celebrations no traveller should miss out on