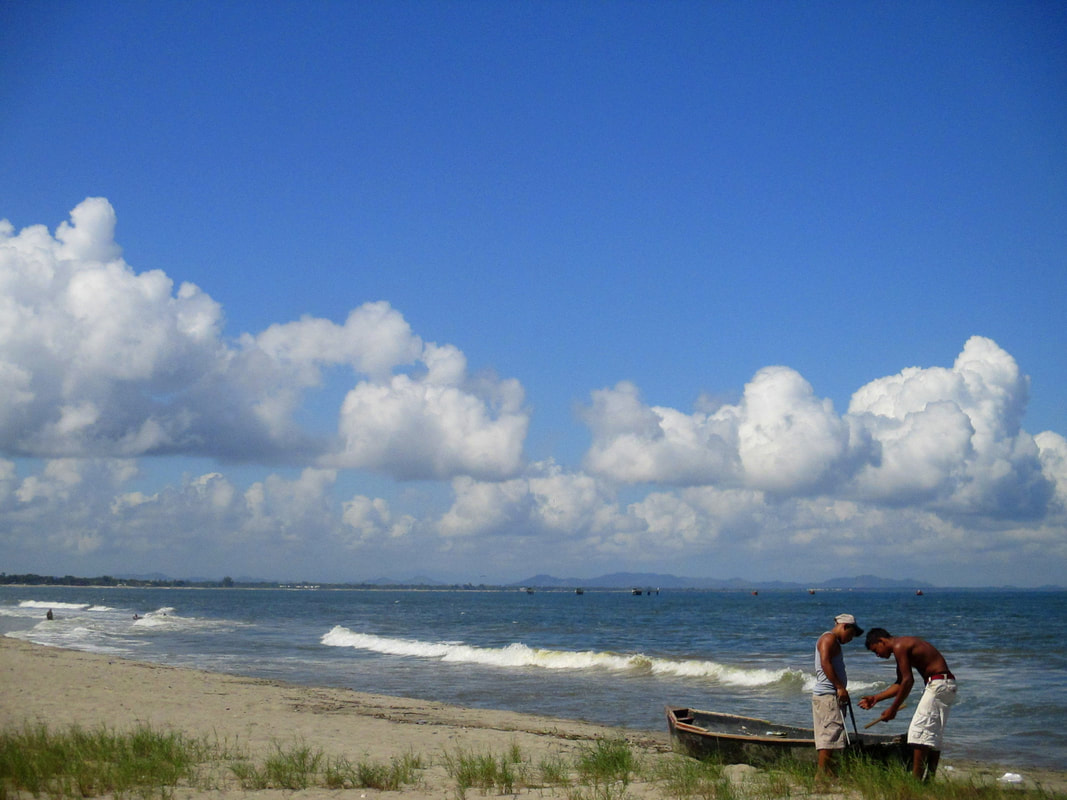 ​Tela = beach and beach = Tela. Just coming from a Caribbean island (Roatán) where we volunteered for a month, a beach was the last thing I was after. Yes, there is such a thing as 'beach overload'. Against my better judgment we went there anyway, as Andy lives there. Who's Andy? Andy is a Korean immigrant who went to Honduras to study, completely fell in love with the country, and stayed. In the meantime a big chunk of his family made their way down there and blended in with a local Honduran household. They did what the Asians (luckily) do on a global scale: start a restaurant. 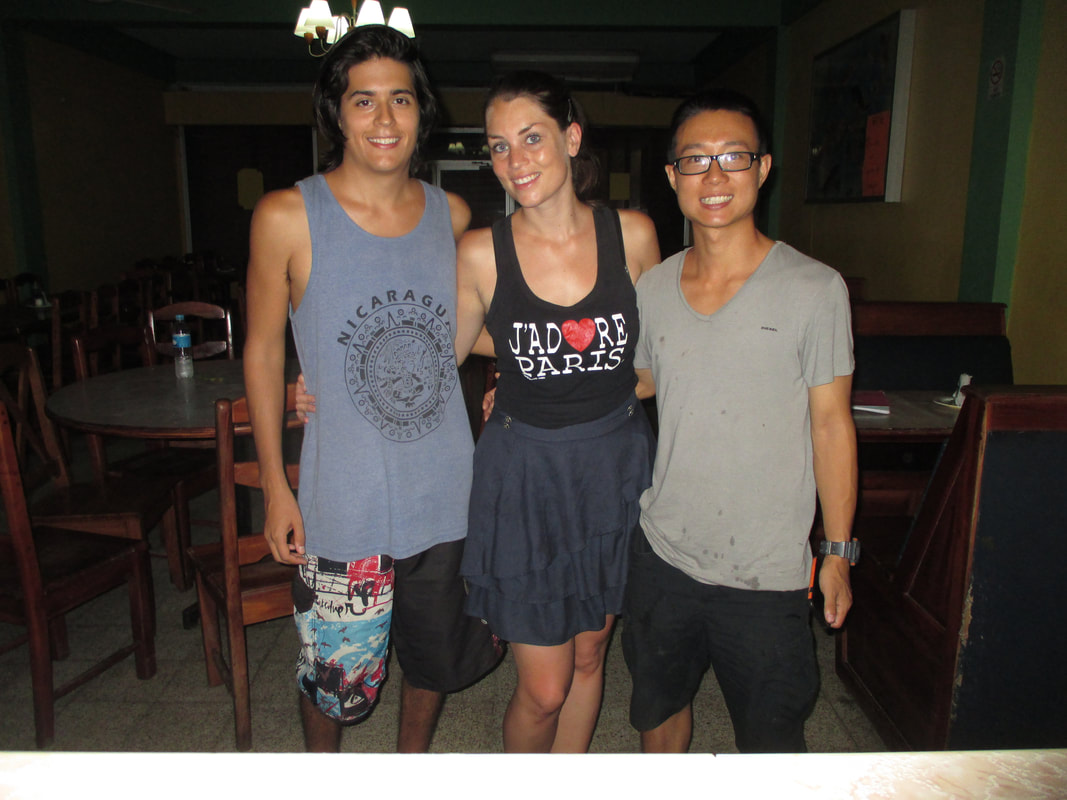 Right now they're in the making of a second restaurant, together with a hotel. It's almost done, but not quite, so Andy offers the rooms for free to the Couchsurf community, a.k.a. me. Yes, where many travel blogs brag about having discovered the magic opportunities of travelling for under $50 a day, or Tela's "best hotel deal in town" for $45, I do it for $0. Besides that, Andy is awesome. 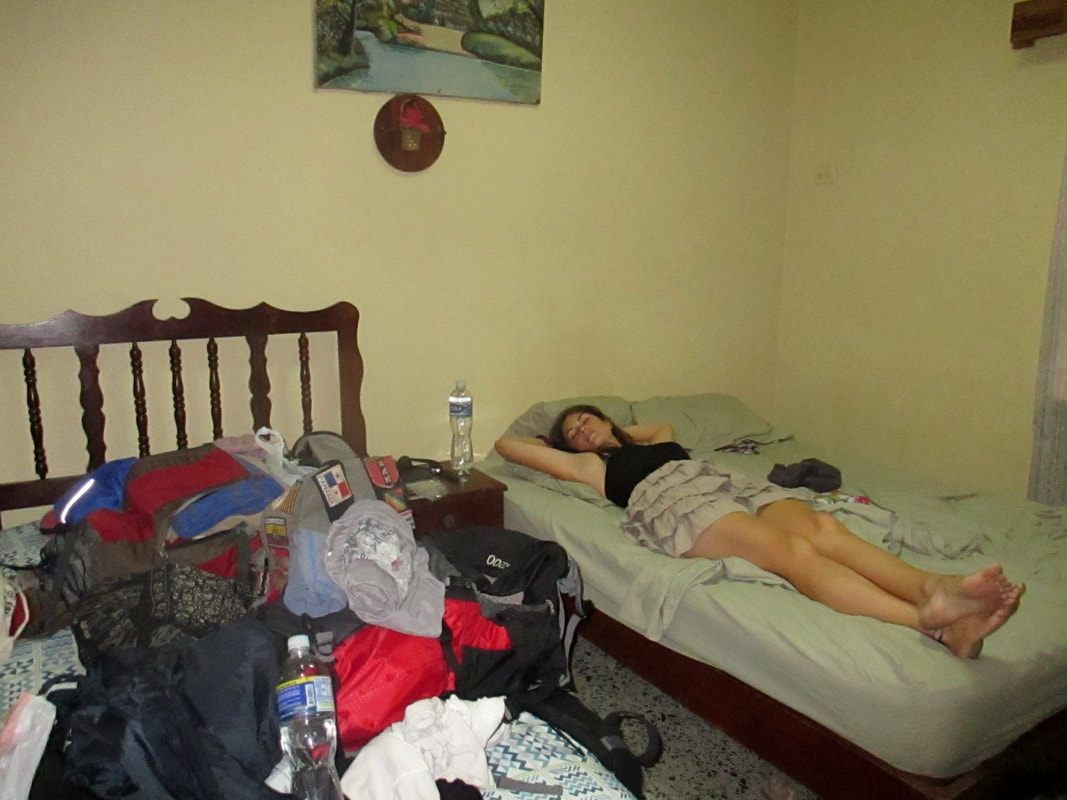 So, if you go to a beach town without having the intention to go to the beach, what else can you do? Every local I asked this question promptly dropped everything to hysterically promote a place called Punta Sal.  A bit of Googling taught me it's an island (again), most easily reached by a $30 tour, where you can hike in the heat for 40 minutes and hang out on the beach with your snorkel. Guess what I did almost every day for the past month? Exactly that. Also, Trip Advisor shout-outs about agonizing mosquito infestations didn't convince. Ok, so what then? Suddenly I remembered a guy called Luis Enrique with whom I got in touch via a sister-in-law of the wife of the waterpolo-team-member of my ex-partner (Facebook reaches far) who, like me, is always on the road and found herself a few months volunteering with this man she also ended up dating. Or something. Luis Enrique does good stuff though: building schools, handing out food to the poor, raising money for wheelchairs for handicapped children, developing the infrastructure in the slums and more of that kind of faith-in-humanity-restoring work. ​ 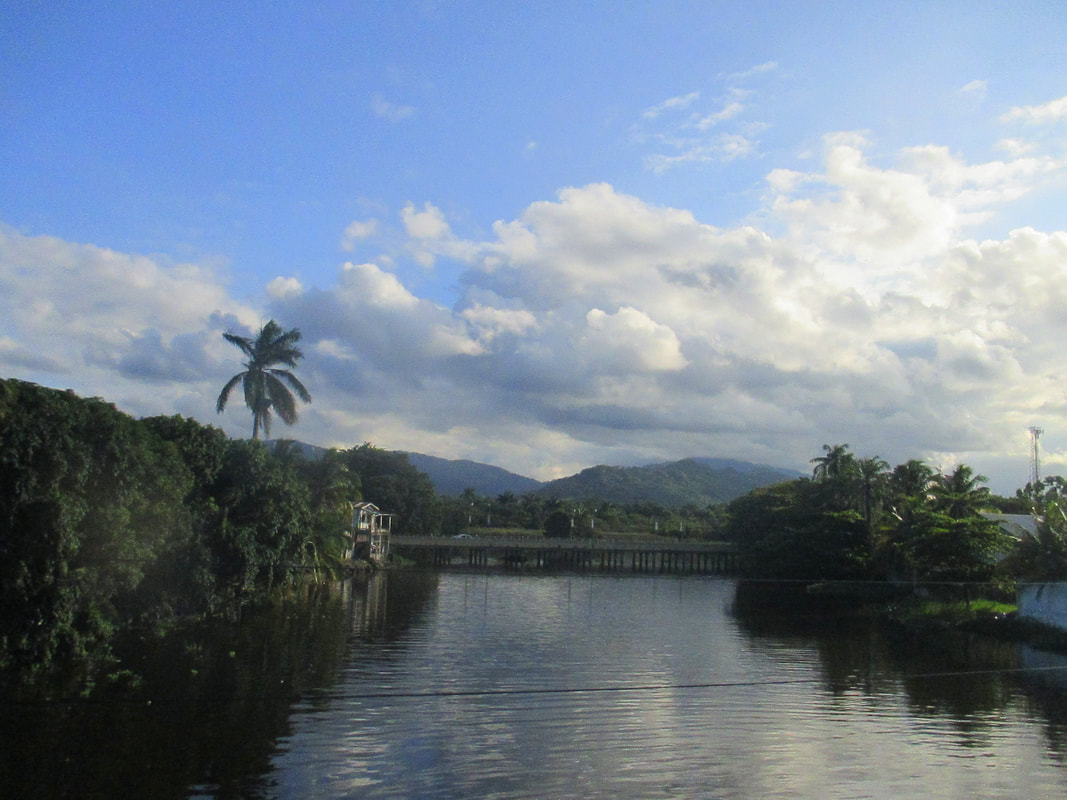 ​I was in touch with him before to help him out with that, but ended up elsewhere teaching kids affected by AIDS instead. Anyway, now I’m here in his hometown I might as well catch up in the end and follow him on his road to a better world. At 9AM he would pick me up. I forgot he is Latino though (my bet), so of course I set the alarm for nothing. He would eventually pick me up at midday. In the meantime I tried to fill up the time with some tourist tips I read on WikiTravel. Fun fact: WikiTravel sucks. You should read Budget Bucket List instead (oh hey, you are already doing that, good for you). The Garifuna Museum they mention doesn't exist anymore according to the local tourist office. Neither does the old railway station. Neither does the Maya Vista Hotel with the amazing view. So guess what I did? Right, walk along the beach. It's like this town forces you to.
​The loud, when the likable Hondureño Luis Enrique took me out for lunch I noticed that everyone seemed to know and love this guy. Even in the bathroom people patted me on the shoulder for being connected with him. Subsequently this local hero gave me a little tour through his work area. He showed me the school he expanded and renovated and gave me a tour through his giant storage warehouse full of clothes / shoes / computers / furniture / food and what not, all donated by generous sponsors. The foundation, Cepudo, is Honduras' biggest and supported by the North American Company ‘Food for the Poor’, providing food, housing and emergency relief in 17 Latin American countries. Proud he drove me to the little luxurious airport to meet some of his friends and check out some black and white pictures of an older version of Tela.
​Then he dragged me into some live Honduran cultural experience: the FIFA qualification match Honduras - Mexico, in which all his thirteen friends appointed themselves as all-knowing game commentators (not sure who "puta" is, but it's a very popular guy). They lost, big time, but that's okay, they were used to it. And that's not why they were there in the first place. In Honduras, football is about beer and meat, per kilo. Yes, you can truthfully state that veganism didn't hit Central America yet.

All inspired by his good work, the day later I clinched the deal to help him painting a school or some community center in a poor part of town. However, I never heard from this humanitarian again, he would not read his messages nor send me anything. Alright. That happens in life. Therefore I decided to go for a voyage of discovery through town to see what I might find. And darn: I did find the ruins of that old railway company, all jazzed up for some trendy press conference (cultural gentrification by using old buildings and deserted factories for hipster events or house parties apparently don't only happen in Amsterdam or East-Berlin). Ha, I know Tela better than the locals now. 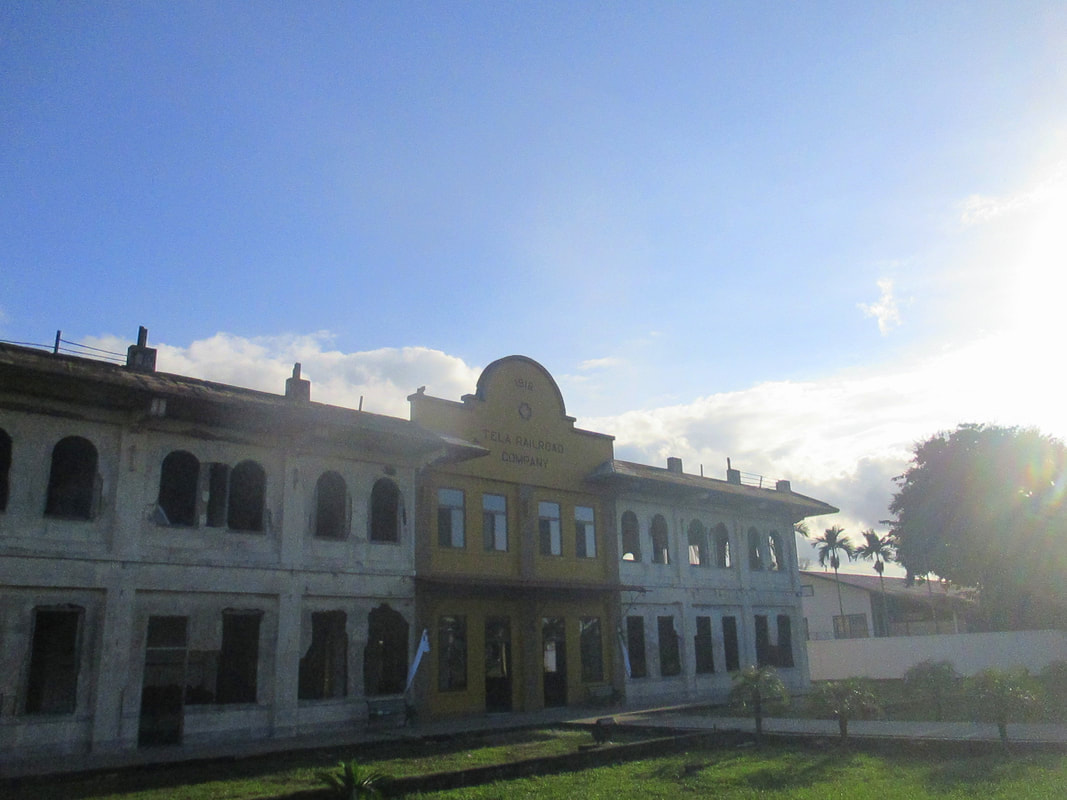 ​On my last day Andy drove me down to alluring Garifuna village Triunfo de la Cruz, where I met a befriended family of 10: “Soy una fabrica” – I’m a factory, the good woman exclaimed with a shrill overwhelming laugh. 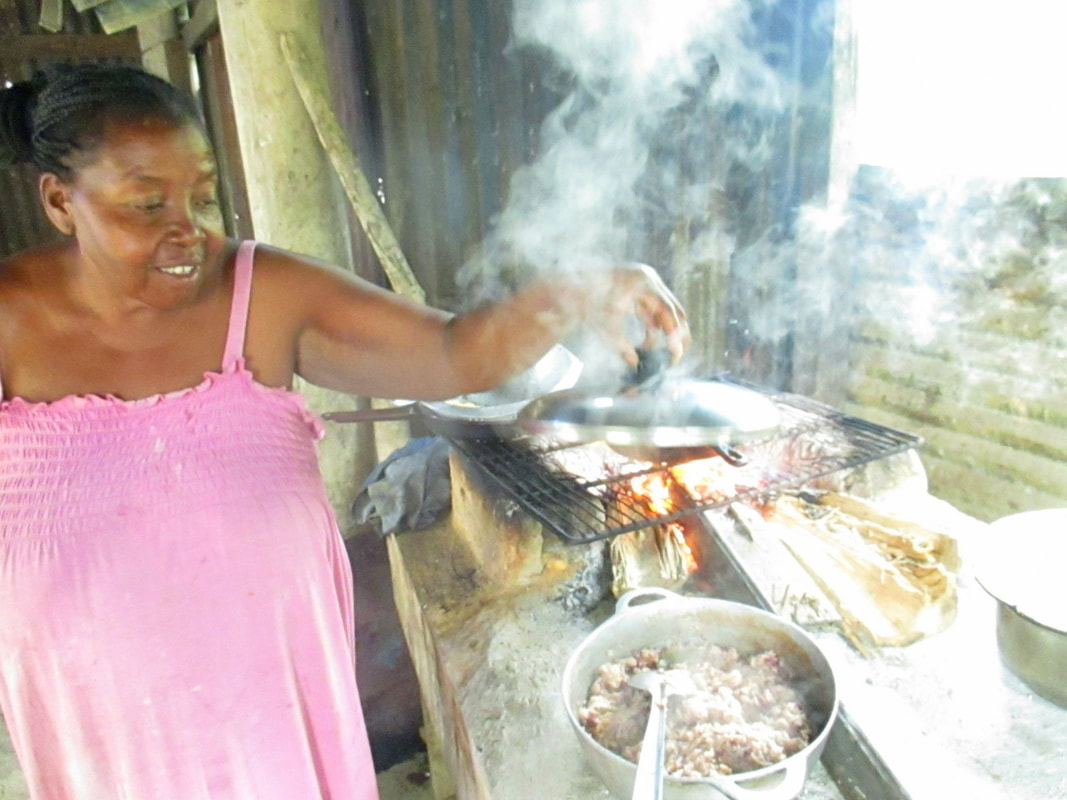 ​Our activities here can be narrowed down to food, as that’s one thing the Garifunas excel in. First we stuffed our faces with addictively good pan de coco. Then we crammed in some rice and beans with coconut rasp, served with some deep-fried plantains. Then we tested how much more pan de coco we could shovel into our overloaded esophagus. Eating until you hate yourself, good times.