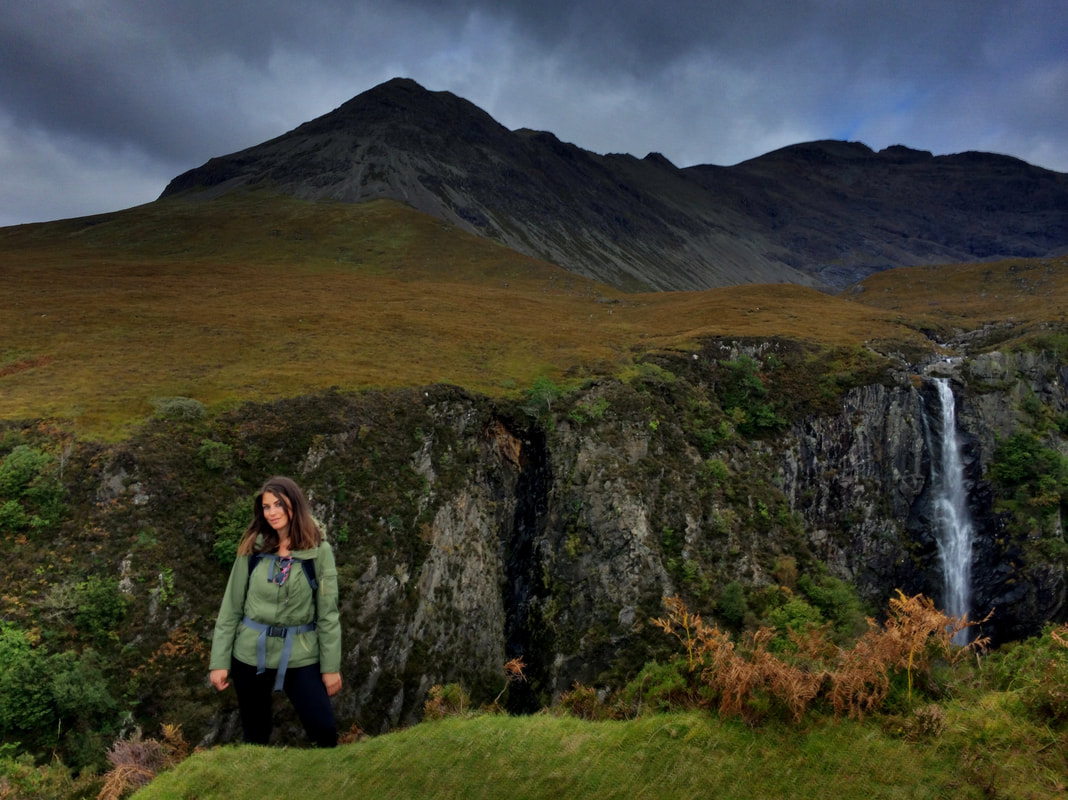 I’m a Harry Potter fan. There’s no way around it.

So when I was in Fort William there was no question about it, I was gonna board the Hogwarts Express to Mallaig.

​However, I’m just a let’s-wing-it-traveler and never plan anything ahead, so it was kind of a downer to find out you had to reserve weeks in advance. Man, I don’t even know what I’m gonna do after lunch! BUT, I spoke to people, asked around a bit, and guess what, there’s a ‘normal’ train (without the steam) driving the exact same tracks, providing the exact same scenery. On my way! 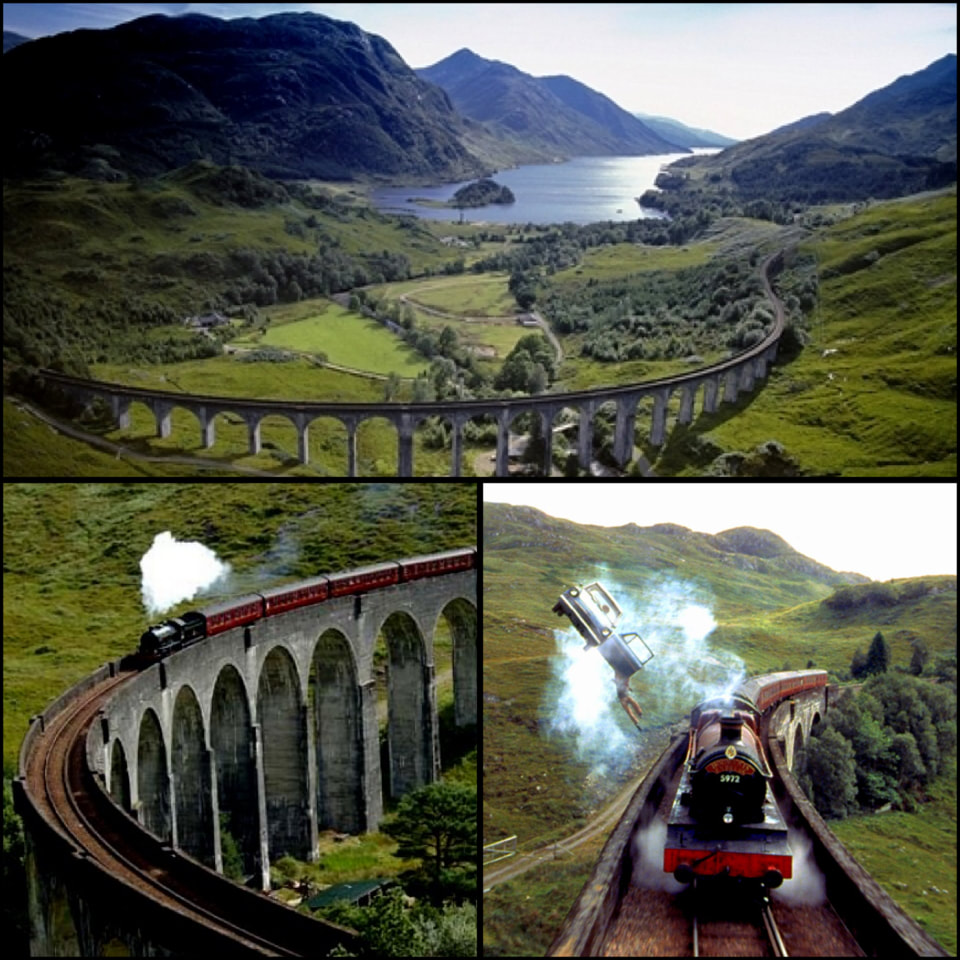 Public transport is kind of a complicated concept in the Land of the Scots though… you have to put all schedules of buses, trains and ferries next to each other only to find out they probably already changed it by now. So I walked out of Glencoe, instead hitched a ride to Fort William with a goodhearted British chap called Paul, took a bus for the last part, arranged the train ticket, sat out that mesmerizing fairtyale journey along many incredible villages all worth a visit in itself and once in Mallaig walked to the ferry...
​
BECAUSSSSE, I was heading to Isle of Skye! 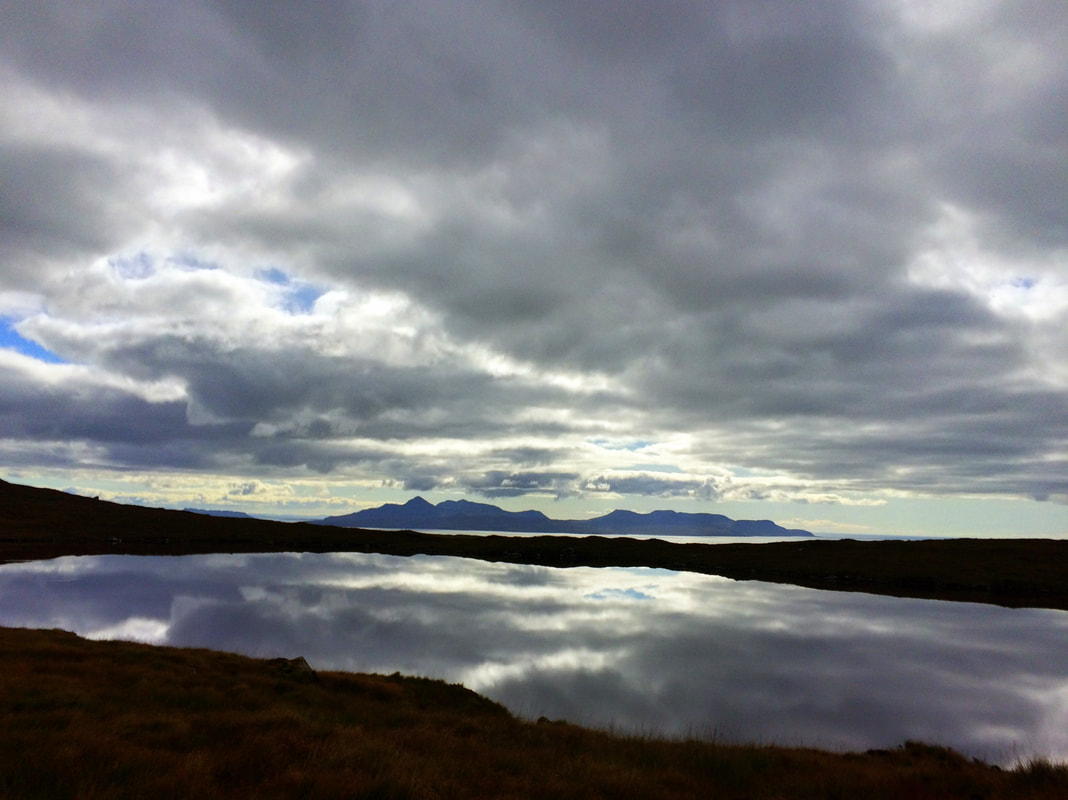 That’s right, the Instagram-hyped, tirelessly tweeted and Asian-invaded Scottish island just off the mainland. I have to admit that’s how I found it, I just typed ‘Scotland’ into Insta and basically 95% of the photos that got my blood pumping had the #skye-tag attached to them. Right, fuck originality, let’s go for beauty!

But the journey wasn’t over yet. As said, public transport is rather sheit here. But my thumbs are up for business! So I already started hussling a ride on the boat, as people have absolutely no problem driving passed you when they’re anonymous, but don’t have the balls to say ‘no’ to someone standing right in front of them adressing them directly. It’s how our species works… and I use that information to my advantage. 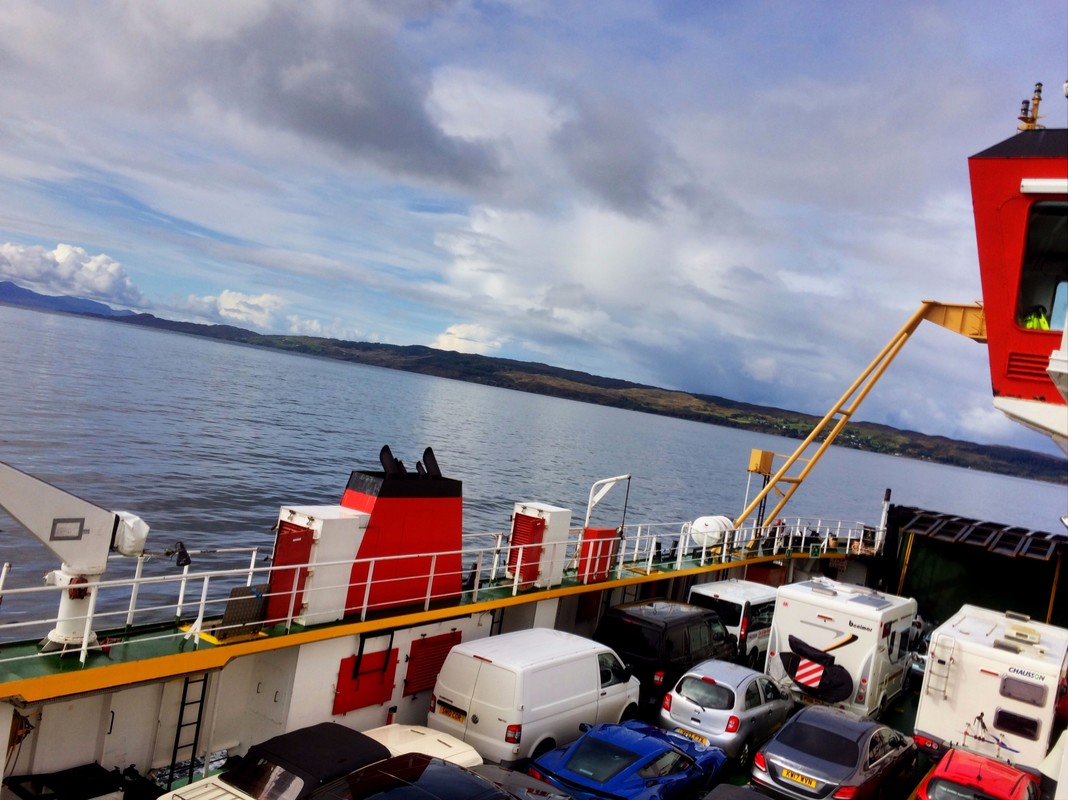 However, the not-so-lovely couple promising to take me along promptly raced off as soon as they got the chance… As they let the cars off the ferry first and then the pedestrians and all traffic comes from that boat, I was kinda stuck. The next bus would go in 2,5 hours, how convenient. So I just started walking and see what happened…

Richard and Alex, that happened. Two brothers, one of them looking like I wished every Scottish male would look like, willing to drive me up to Broadford. 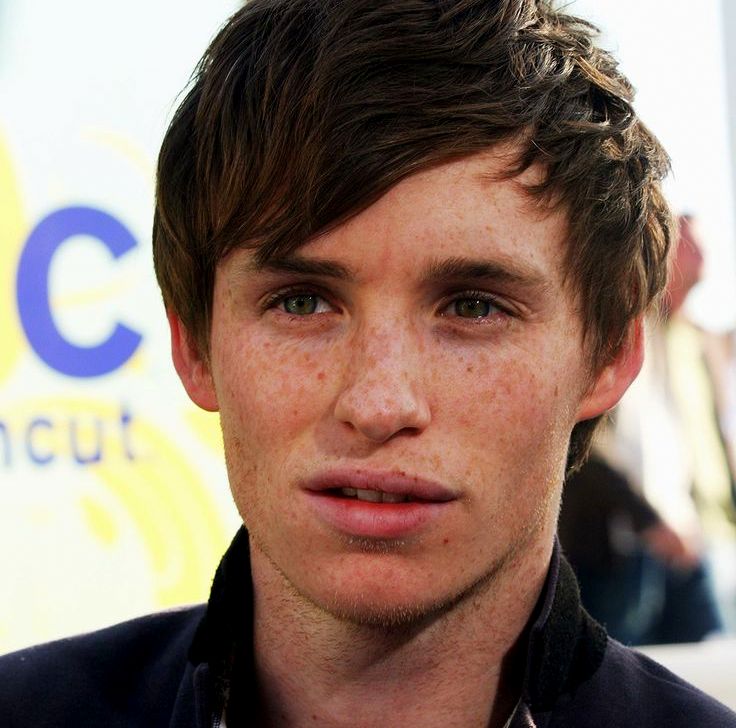 He looked like that cute actor from Les Miserables and that Stephen Hawkin movie. I know it is said that Scottish people are not necessarily known for their good looks, but if this is how they are made nowadays we don’t have a problem here.

They dropped me off right where that couple that left without me was having lunch. Good! So I dropped my back right in front of their table, ignoring them entirely, and started hitchhiking half a meter away from them. I got picked up within 20 seconds and made sure that the driver honked when leaving them in a cloud of dust.

The Dutch-Scottish lady that immigrated here 14 years ago left me at the Rasaay ferry stop, from where a German chap immediately took me up to Portree, where I had booked a hostel for twp nights. Sure, there were Couchsurfers here, but as their profiles gave the indication of grumpy, complaining people that never smile I rather paid some cash than letting negativity affect my cheerful aura.
That German, listening to the name David, never left by the way. I stayed a short week in Skye and from that moment on I had this ganz geile travel buddy on my side. Good news, as he turned out to be the first German I met with a sense of humor (if you’re German and don’t laugh right now you’re confirming my statement) and, let’s not pretend it didn’t came in handy, with a CAR. Another great foundation for our new-found friendship is that we shared our passion for slow mornings. Why wake up at 8AM when you can also wake up at 11? Sunsets are a great substitute for sunrises anyway. Not that there’s sun in Scotland. 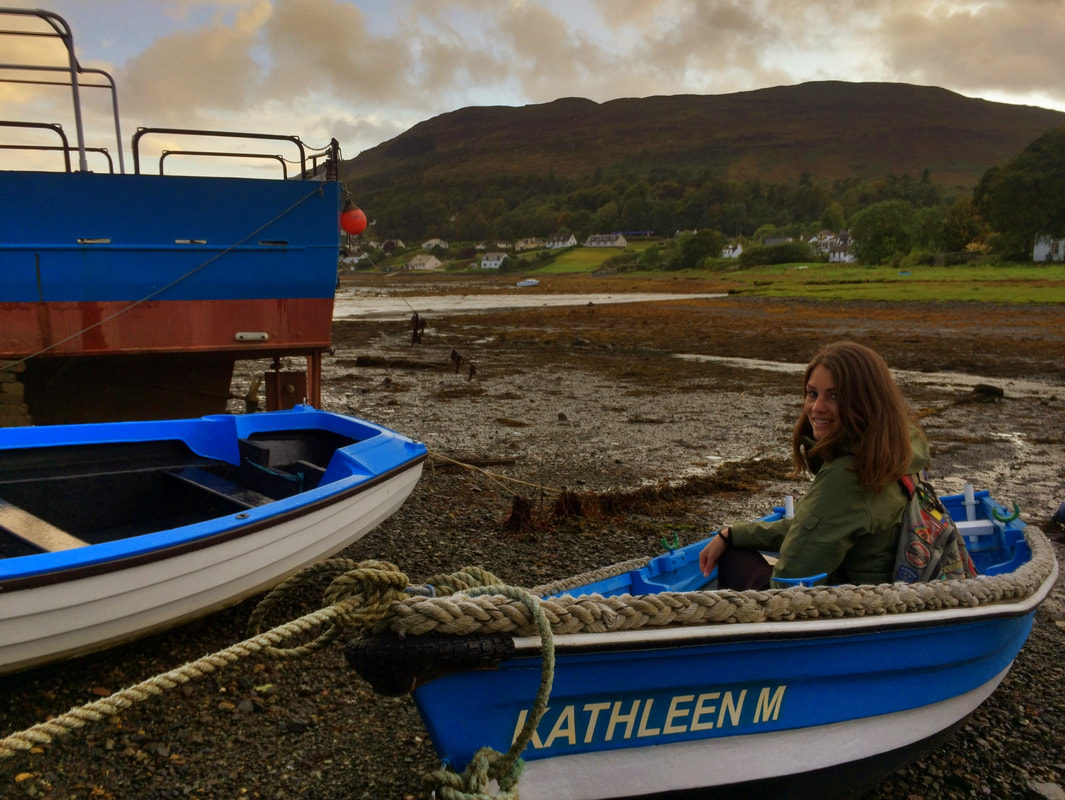 Together we explored all that makes Skye the Asian-magnet it nowadays is.

We conquered the rain to stroll passed the bay of Portree, lined with colorful houses and wooden boats balancing on sand banks waiting for high tide.
The dramatic landscape of The Old Man of Storr, dark peaks piercing into the grey clouds circling aroud the black rocks towering over the treeless landscape… Intimidating and so endlessly fascinating at the same time, the short but rather steep hikes giving you legs the necessary toning.

Quiraing, another famous one on the list, offering views that seem to come out of a painting. Painted by someone who just took some dope.

These colors, I don’t think there’s even a name for those yet, they’re completely inheritent to this part of our planet.
As the weather became frankly impossible, slamming rain and cold cutting our faces, the wind almost pushing us over the edge, we skipped the hike here though and instead drove in a warm car from Staffin to Uig. 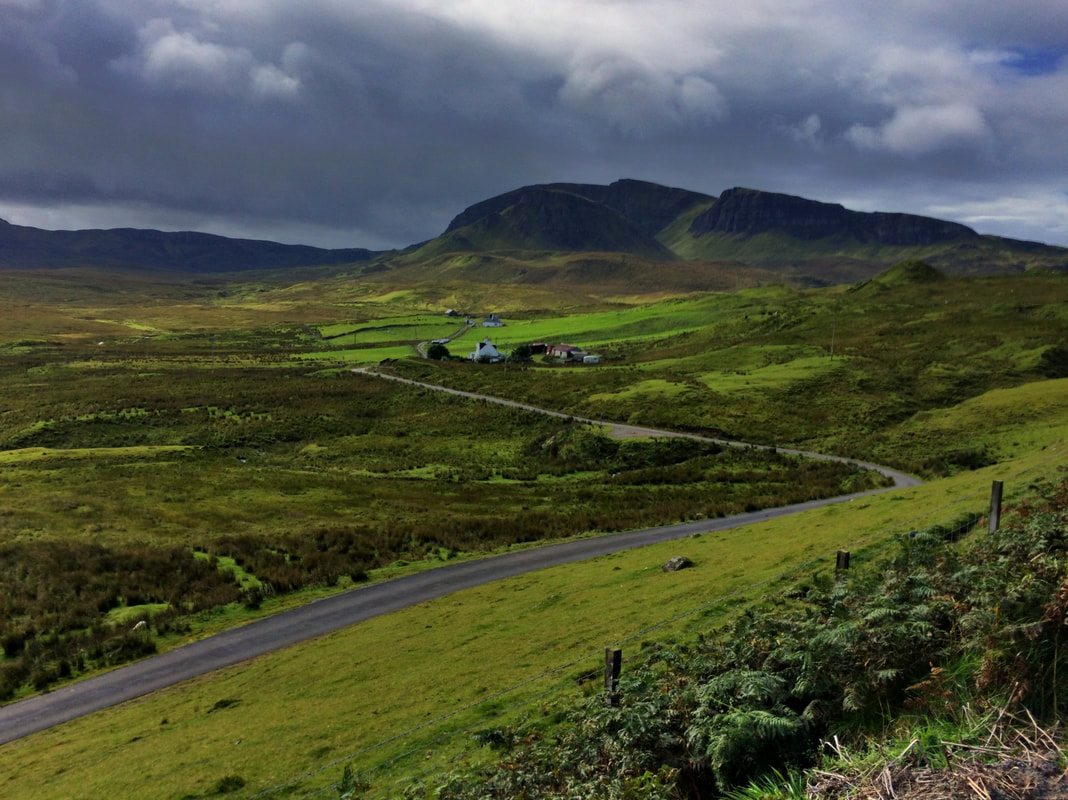 Along the way we passed the freezing soaked backpackers with their hairs straight up troll-style and I realized that would’ve been me had I not met David. Taking every tiny dirtroad we passed, hobbling to whatever unknown treasure it would take us, we made the northern loop to Dunvegan. The picture-friendly castle of which I have no pictures because I have many more creative ways to spend £15.

We roadtripped for the rest of the day, being delighted with every wrong turn we took as that means an extra bonus in Skye… every little corner and look-out point treating us on exceptional beauty, the low hanging clouds sliding over the earth dressed in the bronze tints of autumn, sheep herders completing the landscape as an inherent part of it. Only here did I explore nature that rough and untamed.
Except at the Fairy Pools though, next to the hostel in Glenbrittle we subsequently stayed at. The surreal pools live up to their name, taking you on a magic trip passed clattering waterfalls outlined with flowers, butterflies and I’m pretty sure I caught Tinkerbell along the way. This Disney-fanatic definitely approves.
Glenbrittle is a pretty mesmerizing place to begin with, not existing of more than a handful of houses, a hostel and probably the most scenic campsite I’ve ever seen, submissioned to the strong winds, rain showers and nature’s forces.
You can defy the extreme weather conditions and stand still admiring the rough rocky coastline or disappear in the Cuillin mountain range for some spectacular hiking or climbing expedition. The views granted once up the pointy rocks are simply of another level.
As the hostel had no wifi, no phone reception and not even a screen to watch a movie on you basically have to talk to people. Right, too bad many forgot how to do that in the year 2017. So I sat there drinking an entire bottle of wine by myself, leaving nothing for the other two nights to kill, laughing too loud about my own jokes with David, annoying all other people that had nothing to laugh about in their lives. I don’t know what it is with the hikers category, but I have nothing in common with them except of the fact that I like a long stroll myself as well. They just seem to save all their life energy for their next walk, leaving nothing for shits and giggles. It’s the kind of people that complain about the digital generation exchanging the act of socializing with mobile activity, but that avoid any interaction themselves hiding behind some giant book with pretend-to-be-intelligent-titles.

So at 9PM, when everyone went to bed, I ended up drinking vodka with the construction workers painting the hostel. It was an experience.

These burping men, that had crawled out of their caves in Inverness, have three main concerns in their lives: 1) Getting enough alcohol to get through the night, 2) Finding a screen big enough to watch their football match, any football match, 3) Their worries concerning the ear-deafening snoring of their boss they’re generally share a room with (I heard the man, there were exactly 3 walls in between us).

Neither one held a passport, and I wouldn’t claim their motives were anything patriot… they didn’t know Scotland either, although they never left it. I thought they were at least 15 years older than me, but we shared exactly the same birth year. Once I said I was gonna climb that mountain out there one almost broke his (left-over) teeth on the 1,5-liter-bottle he was about to finish. 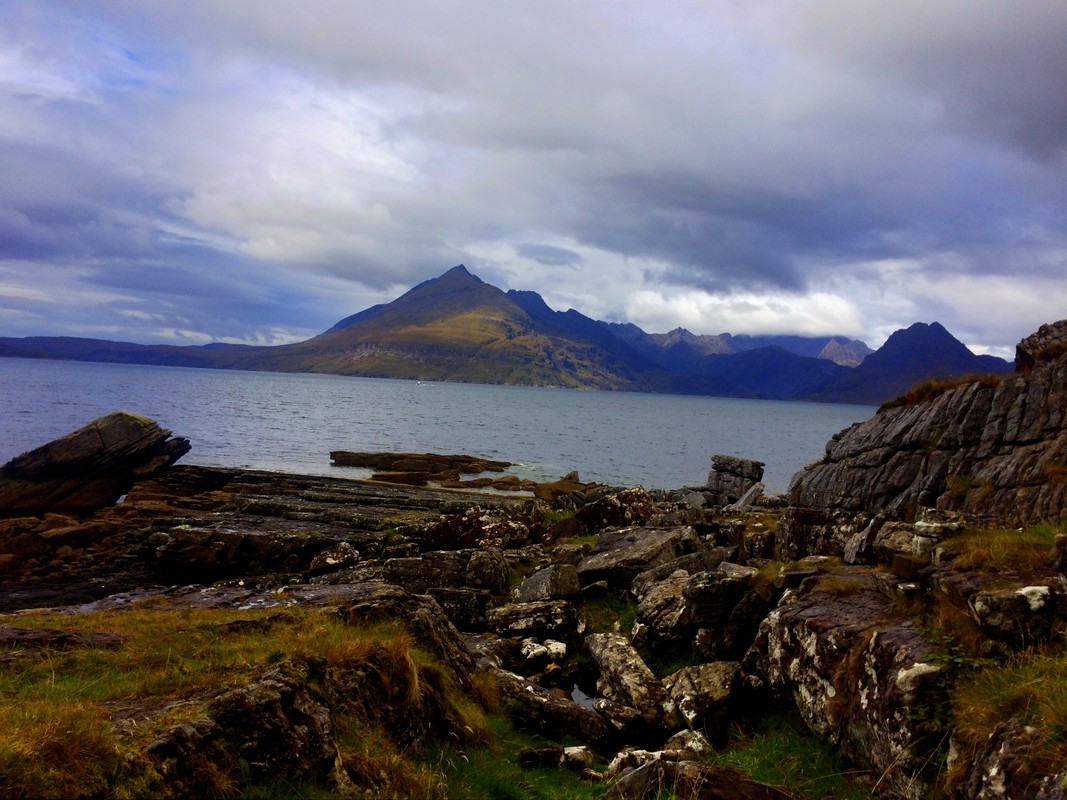 “Why woold ya git tirrrred for noow rrreason?”, he exclaimed, not realizing people spent tons to be here in the place they felt ‘stuck without a tv screen’. Nevertheless, they were good lads, and even though 75% of the time I had no idea what they were saying, I felt that I got a true Sco’ish encounter right there.

Even though my nights here were slightly interrupted because a woman in my room had the odd habit to make loud orgasm sounds in her sleep, I maximized the day by uncovering literally every single part of the island. I don’t think there’s any road Dave and I did not drive, not one panorama unabsorbed by our senses. We even had some sun, unheard of in Scotland! 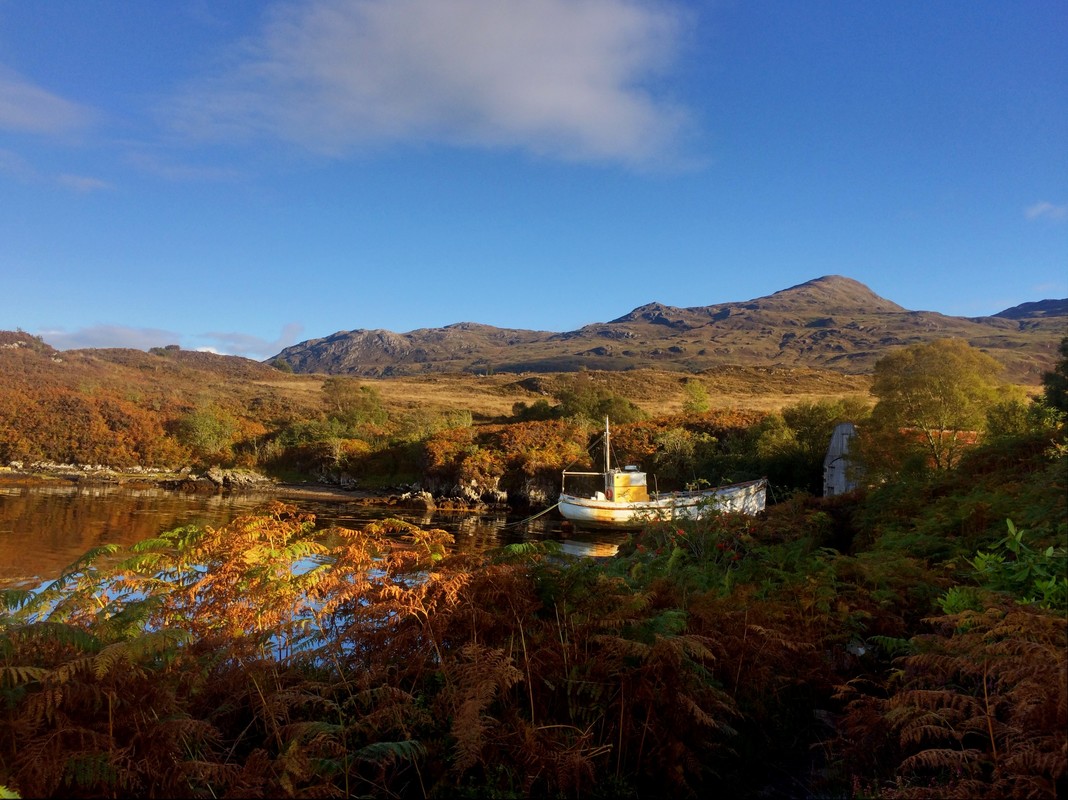 We spent a fair amount of time in Elgol, clambering on the rocks and snapping the photos the sun finally allowed us to take.
Elgol, the pearl of Skye… when it comes to scenery. When it comes to people, try to avoid them as much as you can though, especially the owners of a little coffee shop called Cuillin View.

[Explanation: We entered the premises, ordered both a drink and David an enitre lunch. I enquired if there was soy milk or anything vegan, to which I got the answer this was impossible to get by in Skye (which I can confirm it isn’t, as every supermarket has at least 3 brands to choose from, but that aside). After over an hour my belly was roaring a bit, so I decided to take a little bite of the vegan sandwich I brought along. What followed was an escalation. The man ran out off the kitchen, ranted with a red sweaty face that this is IMPOSSIBLE in Scotland, I have terrible manners and stormed in the kitchen to tell his wife. I put my sandwich away, apologized, explained that, as he can hear from my accent, I’m a foreigner and in my country this is 100% acceptable as long as you already spent money in the bar, but thanked him for informing me about the etiquette of his country which I will follow during the remaining days off my stay. But it was too late. Narrow-mindedness is key here. His grey-haired wife stuck her not-so-cheerful face (I think ‘murderous’ is the word I’m looking for) out of the kitchen to tell me, and I quote, to “piss off” and the guy had already gathered my stuff so I could screw T-F off a.s.a.p]

​As stated earlier, in my unfortunate experience the lion share of the Scots are as warm as their country. 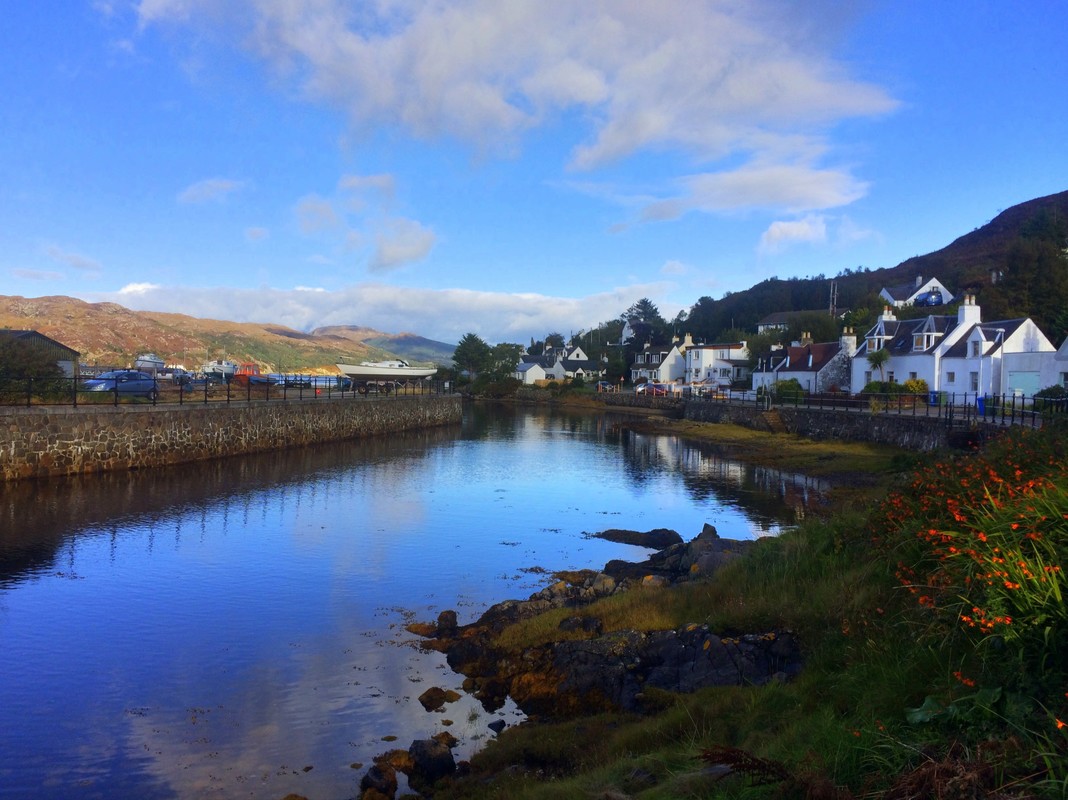 I hope you will be proofed wrong during your visit. Because visit you will. The cold and rain shapes the people, but it also fabricates landscapes that are hard to trace down anywhere else. Conquer the climate, hike away the distance and take in the land that’s visually yours forever. 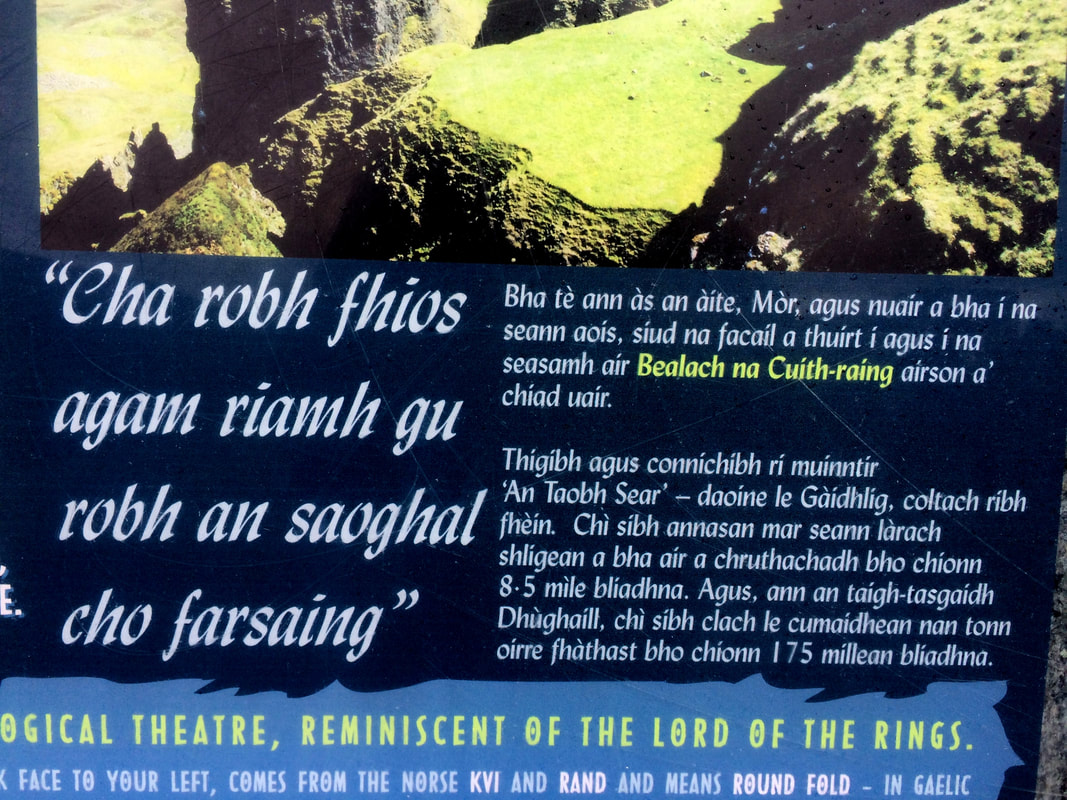 So… how’s your Gaelic?