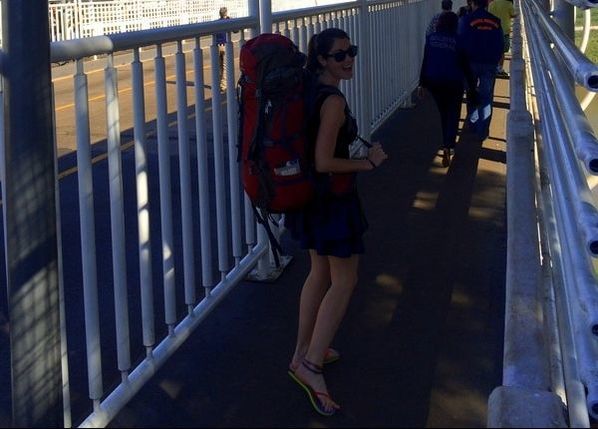 When I traveled to the northern tip of Argentina to visit the Waterfalls of Iguazú, one of the Natural Wonders of the World,

I figured I might as well take the half-hour-bus to the Paraguayan town of Ciudad del Este and check country #46 off the list.

After I hugged my new Brazilian friend, Couchsurfer-host Carlos, goodbye I crossed the long bridge surpassing the Paraná River to collect yet another stamp in my already over-full passport. I was told Ciudad del Este works its magic on the neighboring Argentineans and Brazilians as some cheap electronics-paradise and stranding at the entrance of this humming town I witnessed the effects that had on its cityscape. 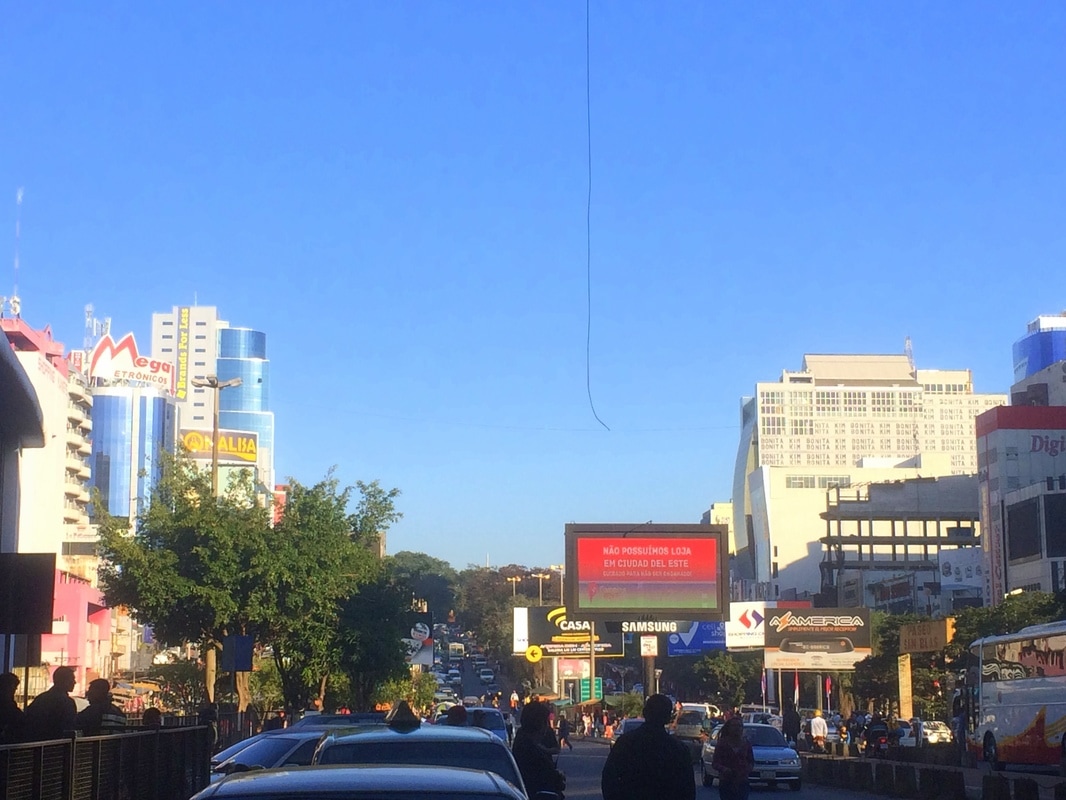 Tall, modern buildings with flashy advertisements grew like shiny mushrooms out of the humid streets where sweating street vendors and spitting cab drivers were swarming. With my backpack attached to my body like an inconvenient shield I worked my way through the vivid street scenes while loud men loudly tried to convince me of buying their carpets, marihuana or motortaxi-services. Rigidly I maneuvered myself through the stalls and cloths full of wares to find the bus stop where my new Couchsurfing host, Giuliano, ordered me to go to. 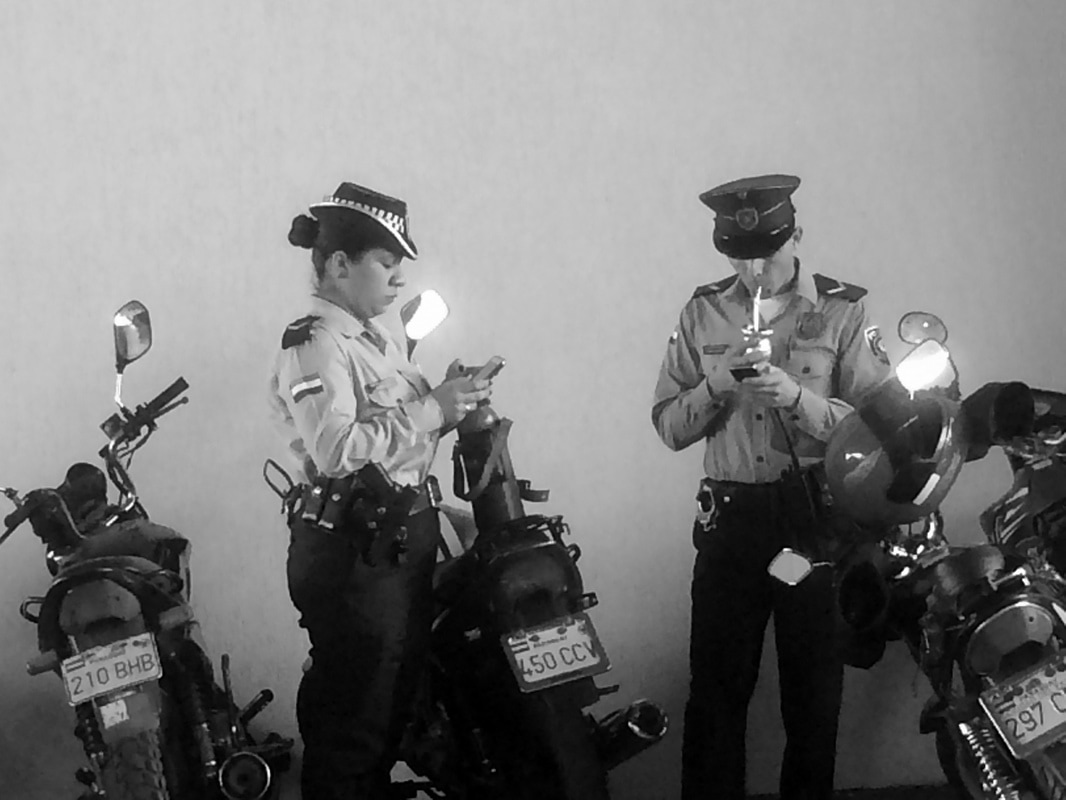 Ciudad del Este is famous for its smuggling and narcotrafficking… luckily you have a police force protecting you in all its might.


Glad people understood Spanish again (the Portuguese in Brazil was an unbeatable battle) I gratefully accepted all the help the friendly locals offered me to navigate through the chaos… Because one thing immediately became very clear to me: the Paraguayan people are a lovable bunch. I took place in the vehicle that reminded me of my chickenbus-adventures in Nicaragua and enjoyed all the contrasts this country has compared to the western-style developed grounds of the richer Argentina and Brazil. 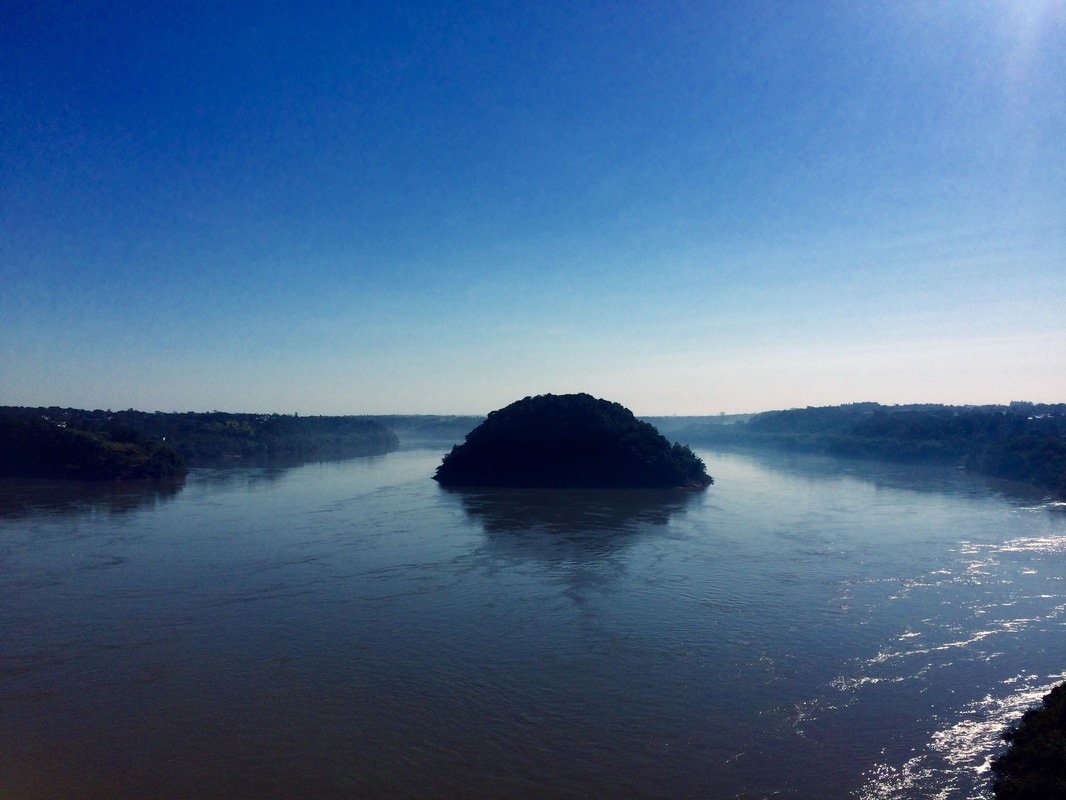 ​After I called Giuliano with the phones of three different people I finally managed to track him down, along with two other Couchsurfers from Mexico and Brazil. At the tranquil edges of town where his rustic house was situated the turmoil of the downtown madness seemed miles away. Listening to his rhythmic accent that seemed to dance out of his mouth I enjoyed an alcoholic refreshment of wine mixed with soda (if I’ll ever dare to do that in Argentina I'll probably be lynched on the spot and sent home in the first available plane). Like many Latin American youngsters Giuliano was still living with his family, which gave me the opportunity to immerse in traditional Paraguayan family life. 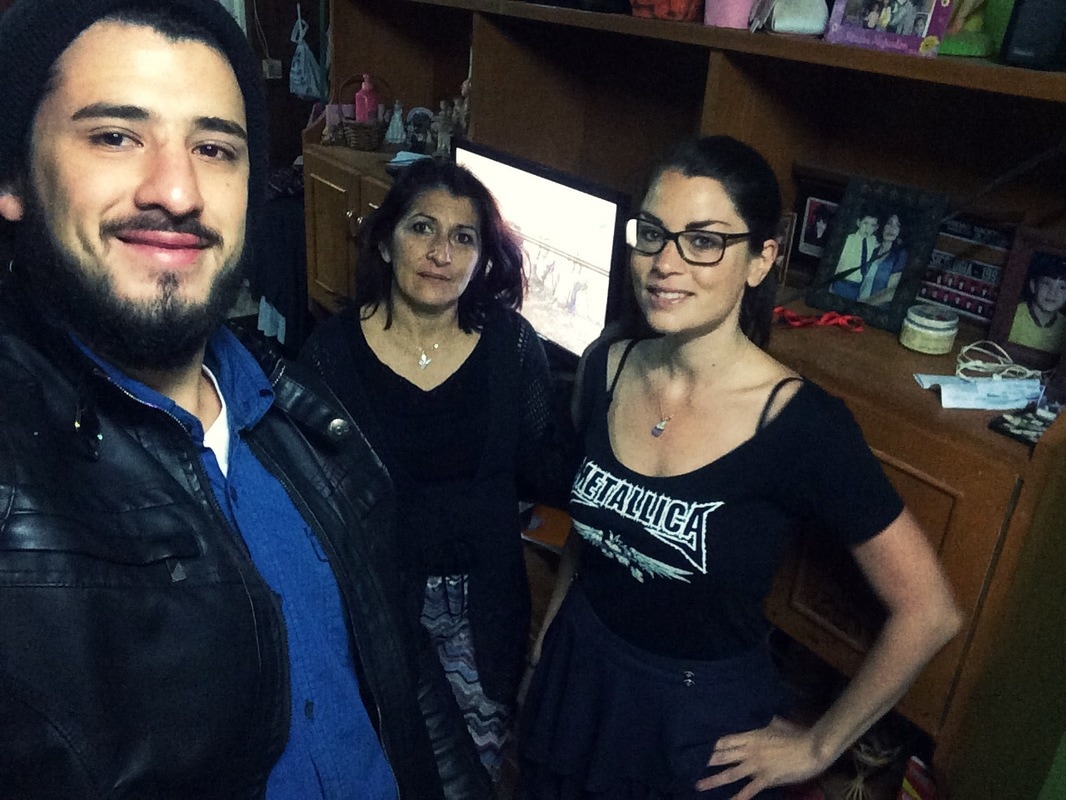 ​
After a typical Paraguayan lunch of some corn cookies and sopa (which is in fact no soup but some salty cake… and absolutely not vegan at all I learned after eating it, I’m so sorry Mrs. Cow & Chicken), Giuliano took us on a little excursion to some nearby waterfalls called Saltos del Monday. But wait, didn’t you just go to Iguazú, the mother of all falls? Yes I did, but waterfalls are awesome, so let me be.
If you ever decide to follow my footsteps and visit these falls for yourself, just know one thing: there is the official (paid) tourist entrance and an illegal (free) ‘Paraguayan´ entrance… Guess which one we took?

Right, after we climbed over the barbed wire and made a mini-safari down the rocks a terrific view was greeting us. While Giuliano posed for my holiday snapshots… 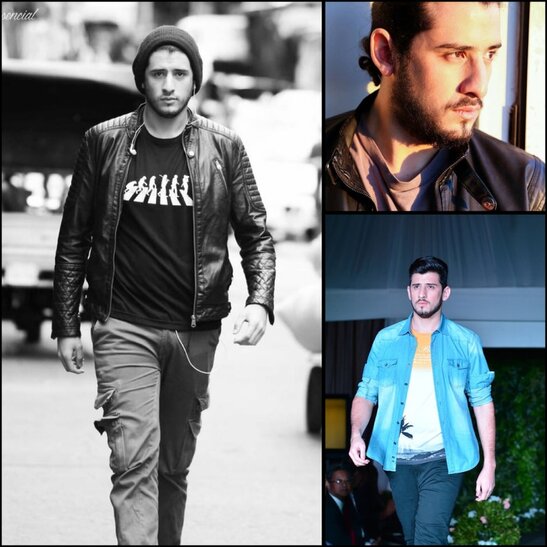 ​[did I tell you he’s a model? I understand my female and gay readers have to visualize this.]
​
… he confessed he has never even visited Iguazú, which is basically in his backyard and the reason why I spent 20 hours in a bus twice. “Why would I pay an entrance ticket to see nature that is freely accessible here?” Good question.

To make the most of my 1-day visit I subsequently bussed down to the Represa Hidroelectrica, the hydroelectric dam of Itaipú that uses the water energy of the Paraná River to generate electricity suitable for 75% of the Paraguayan population. As I’m a big supporter of green ways of energy I signed up for the free, luxurious bus tour that drives all enthusiasts around the giant complex, providing some background information. You know that the plant capacity is with 14GW and 30 generating units, providing 700MW each, the second biggest worldwide?

In the meantime I did my research on Wikipedia and learned the well-mannered guides deliberately left out some essential parts: in order to build this dam 10,000 families needed to be displaced, the Guaira Falls were drowned and its rocks blown up with dynamite which made this gift of nature disappear forever. Just before the liquidation of the Guaira National Park many tourists came to see their beloved waterfalls for the last time, upon which a bridge collapsed resulting in 80 deaths. I guess the wandering spirits howling around the dam at night is indeed a less glamorous side unsuitable for the slick marketing story presented to the outside world.
Satisfied and tired I returned to the house where Paraguayan hospitality covered me as a warm blanket during the surprisingly chilly night. While Giuliano's sisters brought me fresh water and his mum gathered avocado’s that don’t cost 1 dollar a piece here (like in Buenos Aires), but lie on the streets for grabs, I listened to Giuliano speaking to his friends in Guaraní, the local indigenous language that’s still the main dialect in every household. All of a sudden I realized I made a mistake… How could I ever think 1 day and 1 night in Paraguay would be sufficient?

Paraguay Chapter 1 is written, but the story has just begun.
​
... it for sure wasn't, as I did return: Check all the destinations I visited in Paraguay here - discover budget tips!
In order to support the travelers’ community, I spend many hours per week to adequately document all information and advices for prospective visitors, accompanied by a (hopefully) entertaining insight into my personal observations and experiences. This service is and will remain free. However, if you voluntarily want to make a contribution and support my travels and thus the creation of new stories and information supply, here is the button you’re looking for:
Donate
Related:
- More Paraguay: Carnaval in Encarnación (where I met Giuliano again after a year)
- More Paraguay: Camping at a meat and dairy farm in the Gran Chaco (as a vegan)
- More Paraguay: Visiting an Mennonite Colony in Filadelfia
- More Paraguay: Citytripping in Asuncíon and hiking through the jungle of Tobatí
- Just across the border: The Iguazú Falls in Argentina and Brazil
- Meeting Carlos again in Porto Alegre, Brazil... just after a robbery
​- The smoggy capital of Malaysia: Kuala Lumpur