Download File
I went to Cancún because I thought my (back-then-)boyfriend wanted to go. He went because he assumed I wanted to go. We really have to learn how to communicate, because now we both were in a place where we didn't even want to be found dead but for sure not alive.

That’s not what the world thinks though, once he checked in on this location the entire Facebook-population raved about how amazing this tourist hole supposedly is. And I guess that's exactly the problem: The entire world population goes here (especially the white, obese, rich, simple-minded, comfort-seeking, non-adventurous part you don’t want to be associated with), so there is nothing authentic left… It’s an outcome of the wants of the greedy masses. And the part that can’t afford to go there? They just dream away by the photoshopped pictures financed by hotels that charge anywhere in between $400 - $900 a night, what kind of explains the marketing budget. 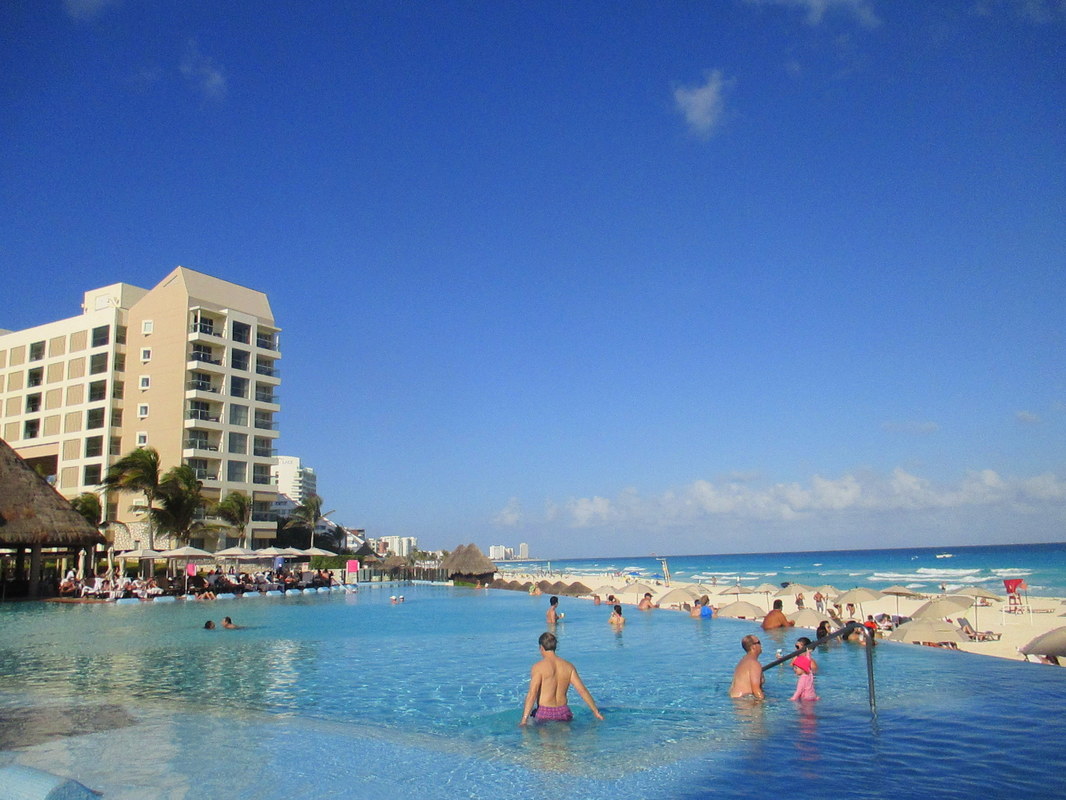 I somehow survived the misery and lived to tell the story: The reality of Cancún in the eyes of a person that travels as a lifestyle, on purpose leaving the beaten path, despising the monetary system and pitying people that deduct identity from material possessions.

Needless to say, I didn’t pay $900 a night. With $900 I can travel three full months, so explain to me why I should work 24/7 year in year out to be able to afford one luxurious week in Cancun while with that money in my pocket I could be gone for an entire year without working one single minute of it.
So after I met up with my awesome Couchsurfing hosts Sergio and Moni and put my backpack down on the floor on which I would be sleeping that night, I prepared for my romantic $1-dinner under the TL-lights of the Mega supermarket (more modern and well-equipped than any western supermarket I’ve seen). Mega it was indeed, and so cheap I wondered why I wouldn’t settle down here altogether. When I came back five other travelers had gathered around on the furniture-less living room: A Mexican and Romanian promoting waterproof backpacks, an Argentinean girl I didn’t talk with and an Australian-New-Caledonian-couple.
The latter have been on the road for five years now and hardly spent a dime. I’ll tell you an even better one: They decided to cut their credit cards in half altogether so they won’t have any money access at all and will need to survive on their creativity. I got tips that make my budget bucket list blog sound like a luxury cruise: scraping down the local markets at the end of the day asking for left-overs, camping in the bushes along  the highway, cutting yourself a way through the jungle to not pay any entrance fees for natural parks or heritage sites… it’s like breathing to them. [Although I must say, I would honestly feel uncomfortable walking up to poor market vendors living in wooden shacks asking for food ‘because I travel without money or resources’. What can they answer? “Good for you, I live like that”.] Remember I wrote about our free night on the cat-pee-couch with wizard Merlin in Guatamala’s Atitlan? Jack, the male side of the couple, lived there for two months not doing anything in particular, because he can. It raised my surprise about why they were here, in Cancún, with its zillion-dollar-drugs-laundering-skyline housing the crowd tripping on plastic surgery and external display. She just laughed hysterically and shrugged: Life happens, and this was one of its better jokes. 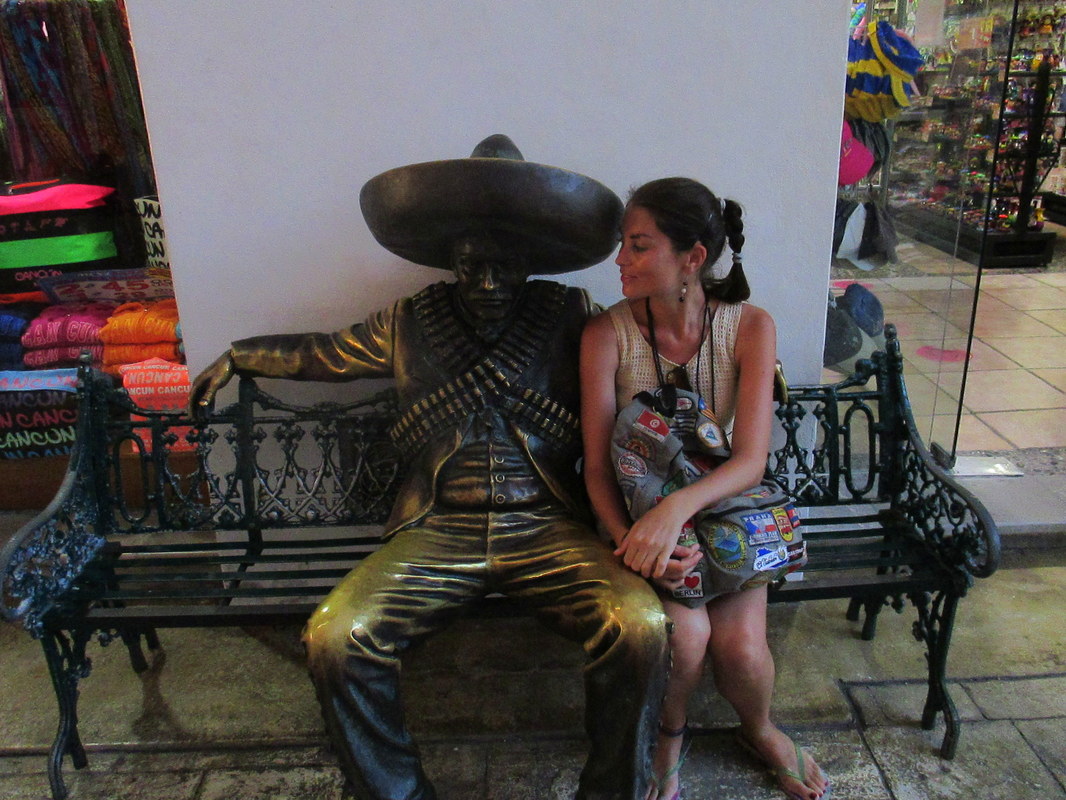 My former travelpal Adam who I met 15 months ago in Ecuador and then again in Colombia (and in the future again in Scotland) wasn’t outspokenly impressed by the place that bears the title Cancún either. After he finished his journey he got some lawyer-job in England during which he was temporarily sent him back to Mexico, the place that I had reached now on the same trip in which I met him the first time. As he had been receiving his European salary without the need to pay any living costs, and food being 1/10 of the Bri’ish price, he invited these broke vagabonds over for lunch. Friends are not the people I see the most (in that case it would be the boyfriend, I mentally puke all over the people saying “their partner is as well their best buddy”, ughhhh get a life), it’s the people you can meet up with after months or years without contact and just flawlessly pick up where you had left. Adam is one of those people. 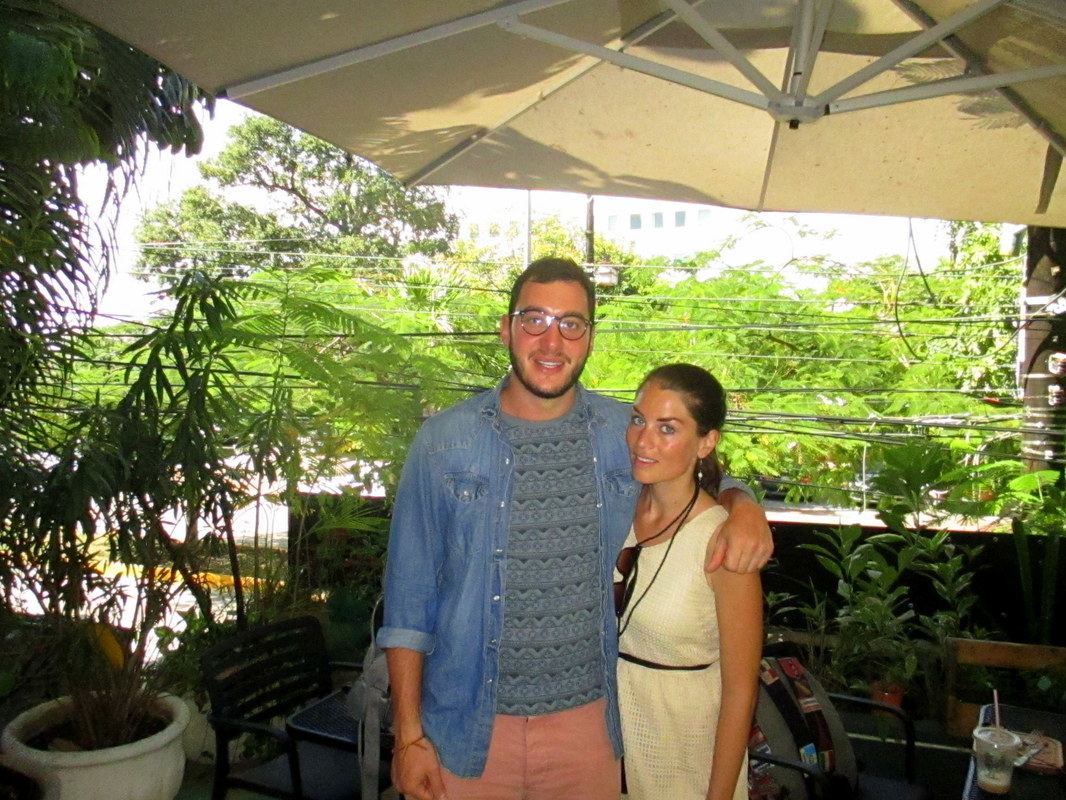 ​As we were in the tourist zone now anyway we figured we might as well walk down the million dollar beach strip, polluted with 5* all-inclusive resorts. I saw Miami in the movies, if I wouldn’t have had any geographical knowledge (/ if I would have been born in the country Miami is located in… just joking, you read this so you’re part of that other cool 50% of the inhabitants right?) I would have been convinced that was the ground I was standing on… with a twist of Dubai and the Gold Coast. Endless lanes dotted with waving palmtrees, a sea so blue you wonder Photoshop had invented a life-filter-version, the sun shining bright on the asphalt giving way to the bright red convertibles racing down to nowhere in particular, as long as people notice them passing by... 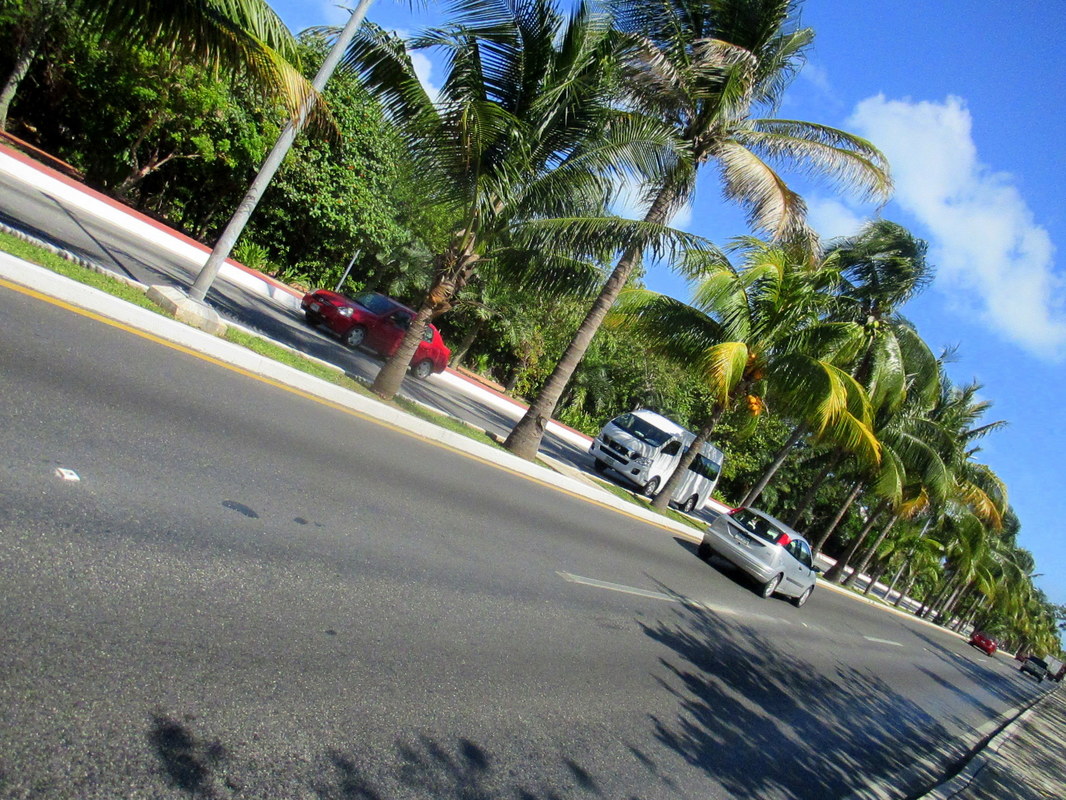 ​“It’s so developed”, my side-kick mentioned. I thought about that for a while. Development? The process of pumping concrete out of the ground in search for profit, ruining both the earth and the home of the creatures calling it their home… could you call that development? Making money that keeps on growing, but taking natural resources that never come back… is that progress? Can you measure growth in terms of the amount of McDonalds' and Burger Kings? (Growth of average body size for sure). Or is it a sum of the internal growth within our minds? “That’s psychological development”, he said, “the system measures progress solely economically and industrially”. And just like that he hit the nail on the head, in one simple sentence he summed up all that is wrong with the world today.

Cancún wasn’t going to restore my faith in Earth and its plague of humanity. It’s a concretion of the seven sins: greed, lust, gluttony, sloth, wrath, envy and pride. And not in a juicy, exciting sense, but in a depressing, energy-sucking way that drains all the positivism out of you. It made me realize that when humanity goes extinct (which it will, because we live in the way Cancún is a demonstration of) only its structures will be left, illustrating the selfish needs of consumption and entertainment that were the reason of its inevitable distinction in the first place. This place flattens out your emotions, calms down your affections… it has no soul.

I couldn’t even feel sad anymore, everything was blank.

​
In the case you thought about booking one of those 'amazing' swim-with-dolphins-tours or dragging your kid to one of the countless dolfinariums in Cancún... Think again. It's NOT okay. If you were shocked by the newsflashes of Japanese killing bays full of innocent dolphins, then be sure to also boycott the dolfinarium-industry... It's the same business, the same origin. Don't be a hypocrite, say NO to animal suffering/killing by taking them out of their natural habitat and holding them in captivity.
In order to support the travelers’ community, I spend many hours per week to adequately document all information and advices for prospective visitors, accompanied by a (hopefully) entertaining insight into my personal observations and experiences. This service is and will remain free. However, if you voluntarily want to make a contribution and support my travels and thus the creation of new stories and information supply, here is the button you’re looking for:
Donate
Related:
- More beaches & scuba-diving in Mexico: Cozumel & Tulum
- The vibrant cities of Mexico: Ciudad de Mexico, Merida, Oaxaca, Puebla, Queretaro, San Cristobal de las Casas
- Maya and Aztec heritage on Mexican grounds: Izamal, Palenque, Tulum and Valladolid
​​- An overview of all Mexican streetfood [Palenque]
- Other party-hardy touristy disillusions to avoid: Playa del Carmen [Mexico], ​San Juan del Sur [Nicaragua], Taganga [Colombia], San Pedro [Lago de Atitlan, Guatemala]
​- Beaches in Panamá: San Blas, Santa Catalina & Costa Abajo
- My 1-month Workaway-project on an (almost) uninhabited island in Panamá: Isla San Cristóbal, Bocas del Toro
- Beach getaway: Nicoya and the Costa Rican coast
​- The tropical beaches of Tortuguero, Costa Rica
- Beach and surfspot in El Salvador: El Zonte
​- The beaches of Honduras: Tela & Roatán
- Enjoying the beaches of Nicaragua: Isla de Ometepe & Playa Gigante
- Beach hangouts in Uruguay: Cabo Polonio, Barra de Valizas & Punta del Diablo
- Argentinean beaches: Puerto Madryn & Colón
- Brazilian beaches: Florianopolis, Ilha Grande & Rio de Janeiro
- Paraguayan beach: Encarnación
- Bolivian beach: Copacabana & Isla del Sol
- Colombian beaches: Palomino, Cartagena, Santa Marta & Tayrona National Park, Colombia
- Relax at the beaches of the Algarve, Lisbon
- Spain and its beaches: Barcelona & Malagá
​- The face of mass tourism: Kota Kinabalu, Malaysia, Borneo
​​- One to not include in the bucket list: Manila, The Philippines
​​- 13 Strange Observations of South Korea