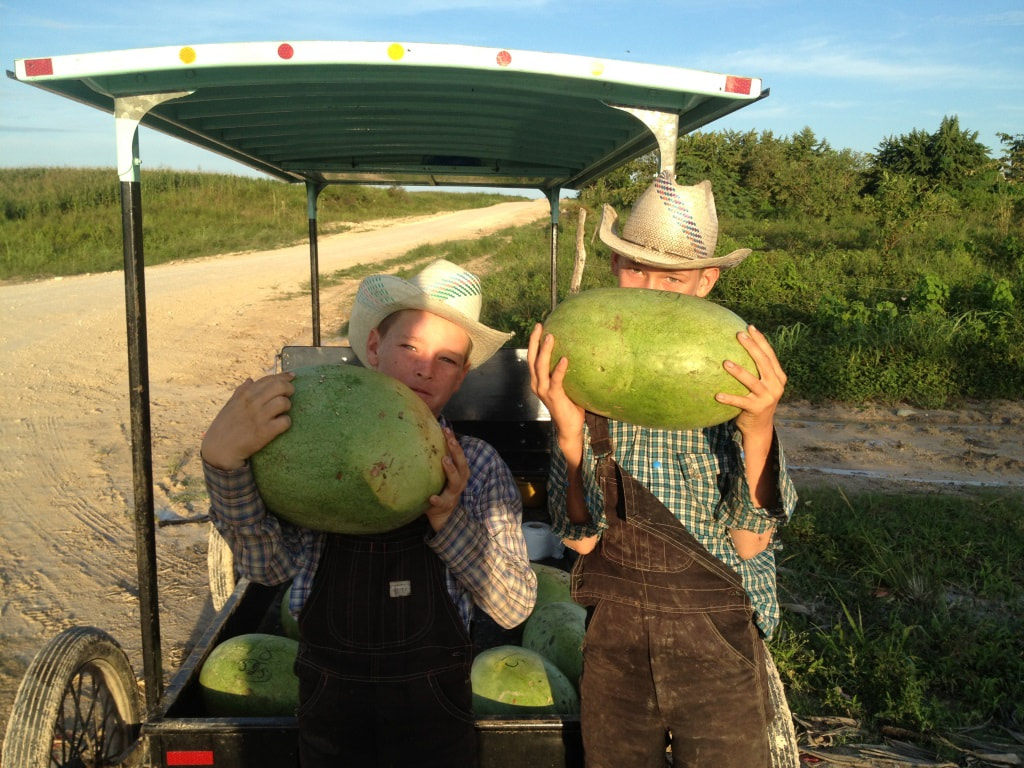 As hitch-hiking had been very successful in Belize so far, I let Couchsurfer Andrew drop me off at the highway to catch a ride to San Ignacio. It took about three seconds. A Belizean Mexican with North-American roots named Alex picked me up, together with a local prison supervisor. We talked about travelling, talking Kriol and Mexican culture and before I realized it my destination was reached. I entered the 'tourist welcome center' (yup, tourist hole 2.0, but quite convenient) where they called Couchsurfer Epy for me, who seemed to be a well-known character in town. 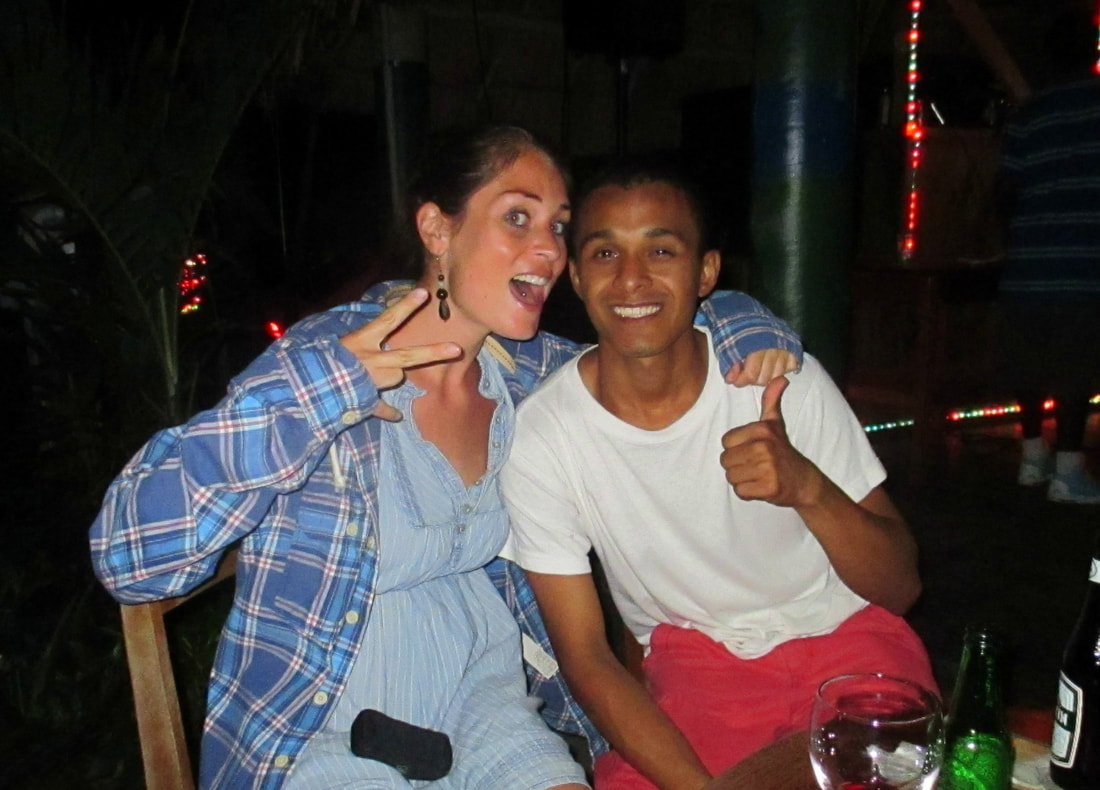 ​It wasn't hard to recognize him: an ADHD whirlwind with a laugh so intense even the most depressed grumpy cat is forced out a smile. Happy-de-Epy! He offered to guide me around 'downtown' San Ignacio first, pointing out things with an enthusiasm like he saw everything for the first time.

​After a local lunch of panades and salbutes he called his dad, a cab driver, to drop us off in front of a river. There used to be a bridge but a flood wiped it all out two years ago and no government or local institution cares enough to replace it. So now there's a boat, pulled from side to side with a rope: the only way to enter the nearby village of San Familia where Epy lives with one of his nine sisters and her substantial mob of kids.
He told me his mom left after she caught his dad cheating, whereupon she ran off to the US to work, leaving her ten kids behind. From that moment on his oldest sister took care of everything and everyone, herself only being a teenager. They still live in the same humble house they made of wood, plastic and wired iron. Proud he showed me my room, the best one in the house…  He slept somewhere with the others just to give his guest the best he can offer:
​
True-hearted hospitality of people who grew up with the values of sharing whatever little they possess in order to survive together instead of in isolation. 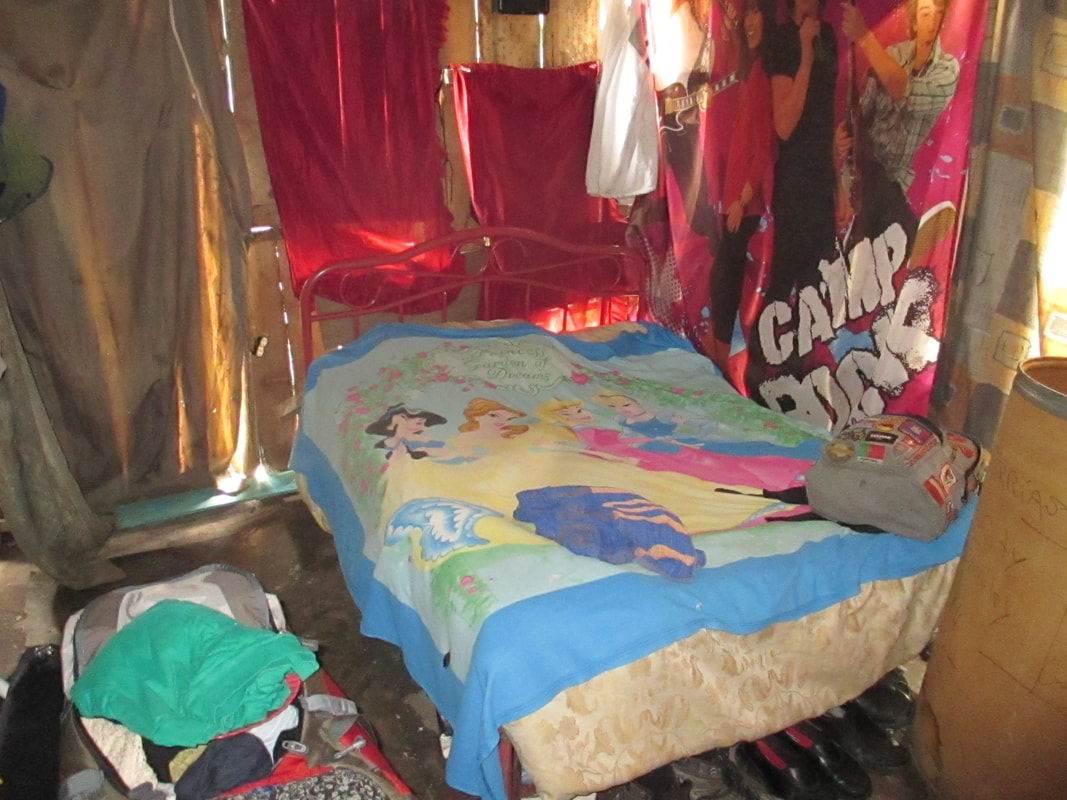 Feeling all filthy from the dusty roads I took a bath, which basically came down to throwing a bucket of water over me at the back of the house. "Are you ready miss?" Epy took me a few houses down the road to play some kind of pool game at his uncle’s pub, housing three battered pool tables. We both won once, which was a satisfying score to end it with.

Looking over his billiard cue Epy told me about his friend’s father, who just died in a biking accident. In Belize it's common to go to the victim's family's house and just hang out there for support until the body's deep in the ground. So my tourist activity of that day was attending a local wake... in a Mennonite community. 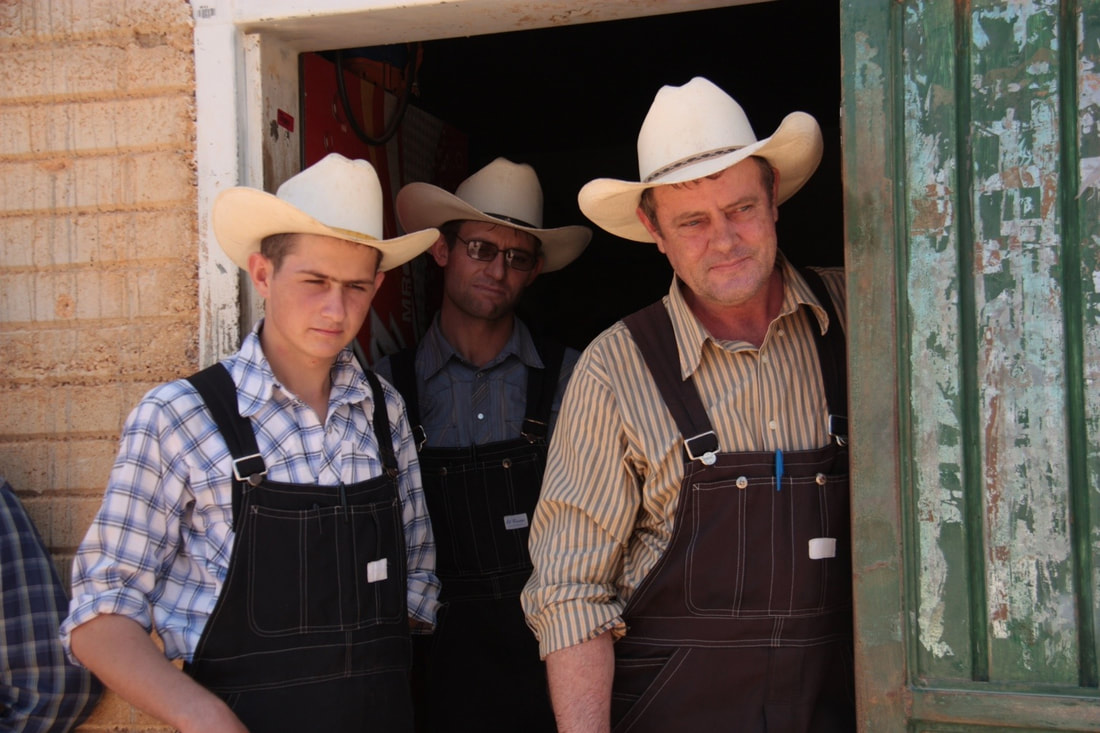 ​What's that? The Mennonites are Christian groups belonging to the church communities of Anabaptist denominations named after Menno Simons (1496–1561) of Friesland (which is a Dutch province). Their early teachings were founded on the belief in both the mission and ministry of Jesus. There are many different divisions within the Mennonite-branch varying in strictness and conservativeness, the ones in Spanish Lookout where I went to being part of the more conventional ones. 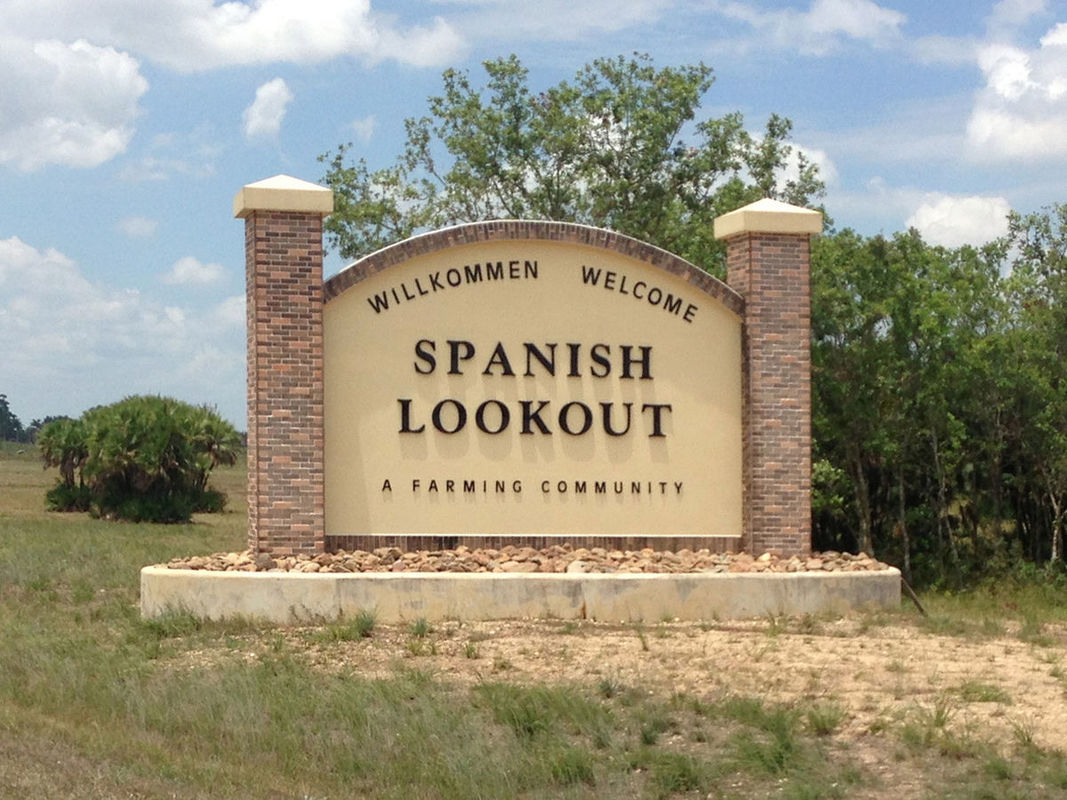 ​This day would be the most remarkable one in Belize so far, reaching a whole new level of weirdness. I had seen some of these religion-fanatics in local buses and on horse-and-carriages in the countryside, but I ignorantly concluded they were Amish, hermetically excluding outside contact. How different was the reality: After I drove down to the Spanish Lookout with Epy and Kenny, the Belizean adopted daughter of the victim, the community welcomed me with open arms. In fact, once they learned I am Dutch they emotionally hugged me and told me I was family as they all descend from my country. It was true, the community had only a few family names (marriage happens within the community) which all seemed to be Dutch or German. 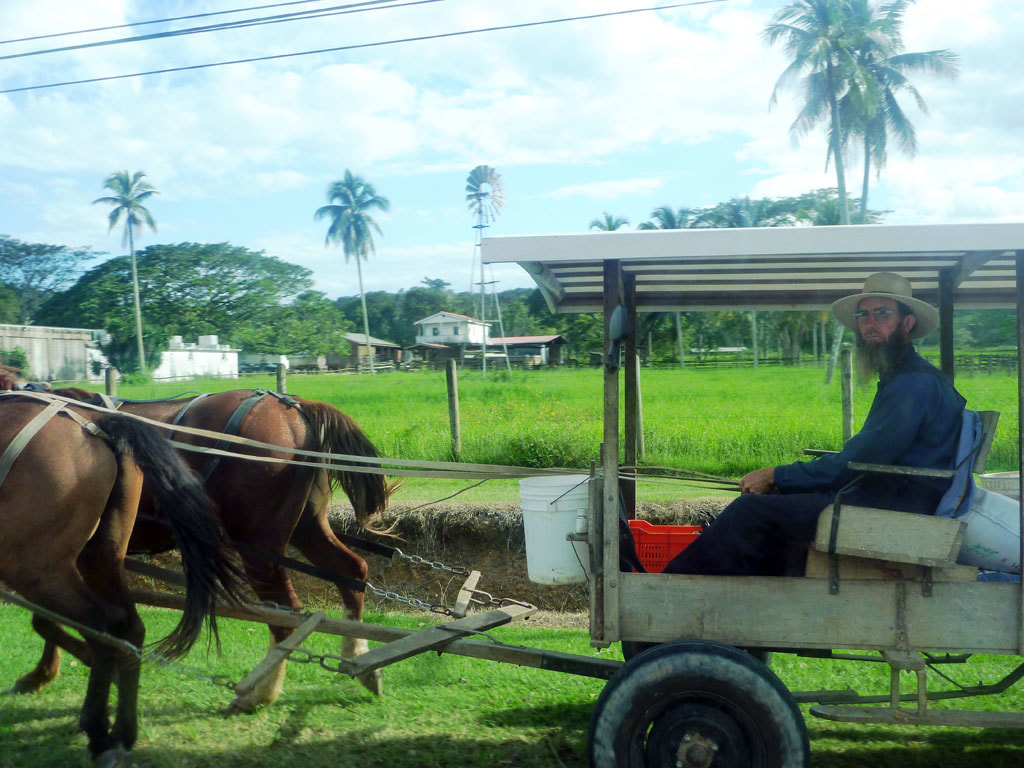 ​They spoke 'Plat-Deutsch' what can be described as ancient German with a Dutch pronunciation, sounding like the Dutch Frysian dialect (the family's last name was also Friesen, how we call the inhabitants of Friesland that speak Frysk... Something they didn't know and promptly put me in the centre of attention). With their blonde hair, fair skin and bright eyes they looked Dutch too, but their clothing and hairstyles reminded me of the dusty black-and-white pictures of my grandmothers grandma... long countryside dresses covering the entire body, head scarves wrapped around the knotted hair, no make-up nor jewelry - the men mainly in blouses, pants with suspenders and farmer hats. 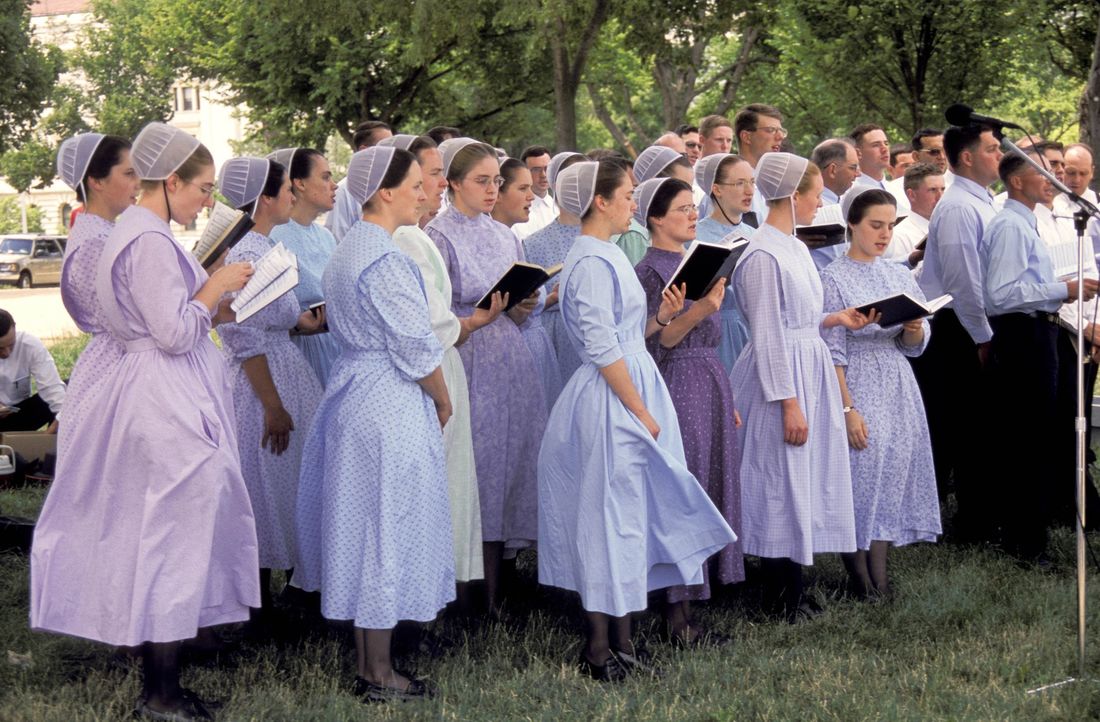 Some of them looked more like what we consider ‘normal’ (a.k.a. Western), but that meant those people in question were kicked out of the Mennonite church for being too 'worldly'. Over a plate of typical Dutch food l had deep conversations with the older generation in Hoch-Deutsch (modern German) about the essence of God.

Being a tolerant atheist I basically shut up and just listened to see the world through their eyes for one little moment. I know already what I believe, I won't learn anything by repeating that out loud, I rather learn about contrasting world visions.

I followed a group of youngsters to the car, looking back over my shoulder witnessing a scene that reminded me more of a 18th century old Dutch party that didn't really kick off yet than a funeral wake: people sharing food, drinks and jokes. In Belize. I could hardly believe what just happened.
​The minors and I were off to the clubs to celebrate the living. In order to confirm my suspicions I randomly started talking about the legalization of gay marriage in Holland 15 years ago (yup, f-i-f-t-e-e-n years earlier than the US, but we didn't get a queer Facebook filter). And I was right, some of the guys, who I'll keep anonymous, shyly admitted to be homo- or bisexual as well. They had to live through an existence of lies in order to be accepted in their community, as they would be kicked out and lose their job if they told the truth. Interesting... If there is a God, why would (s)he create the natural phenomenon of homosexuality in people, animals or any other living being? [Being the former caretaker of two gay cats I personally witnessed proof of the obvious fact it's not a well-reasoned human choice.]. I decided to play Cupid that night and said what I needed to say to bring some sweet men together, resulting in an extra male Couchsurfer sharing the bed with Epy.
I got woken up by the screams of children and when I opened my eyes three pairs of big brown eyes stared at me. A few little girls quietly sat on my bed researching that strange Snow White sleeping in their little house. Quickly Uncle Epy came in between "vayan vayan vayan chicas, rapido" and to me: "y tú tambien, my friend is waiting to give us a ride to town."
​
The plan was to visit Xunantunich, one of the many Maya sites located around San Ignacio. The name is Mayan for ‘Stone Woman’, referring to the ghost of a woman claimed by several people to inhabit the site, around 1892. This lady is dressed completely in white, has fire-red glowing eyes and generally appears in front of ‘El Castillo’ ascending the stone stairs and disappearing into a stone wall. 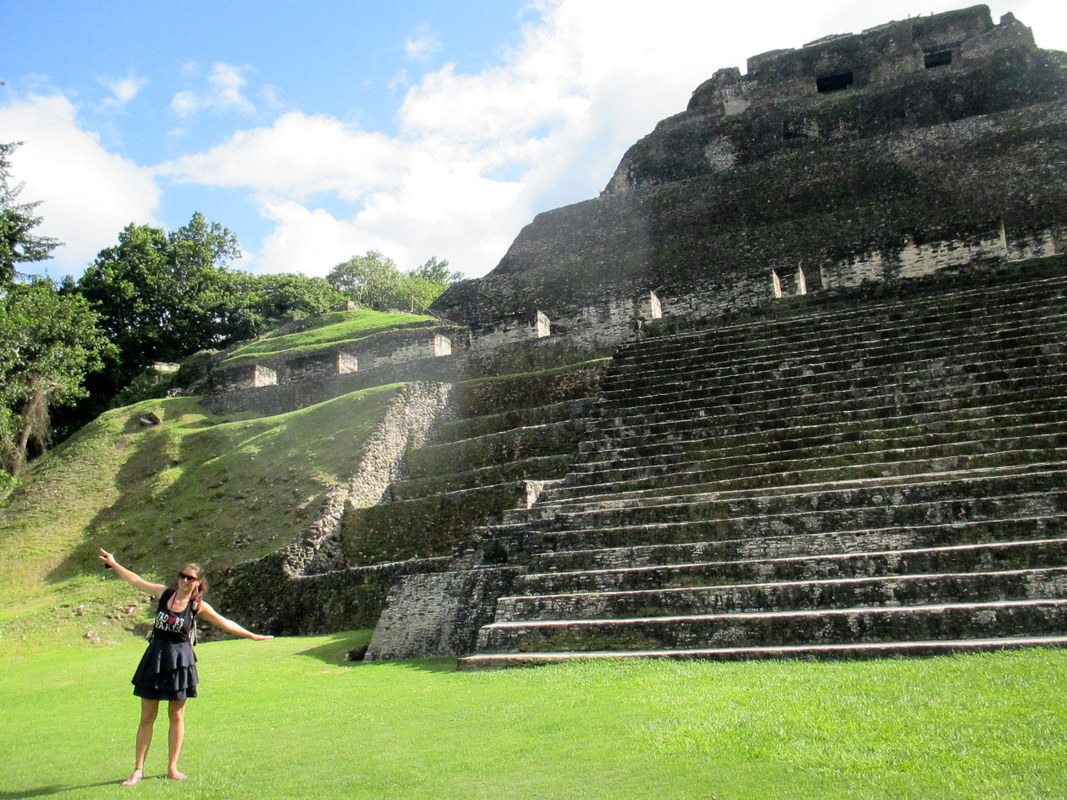 Once there I learned that my old student pass didn't give me a discount, as that privilege was reserved for locals. Interesting, as a sign said that most donations and funds for its preservation came from the European Union, a proof of appreciation for its citizens/tax-payers (read: me) would be in place.  However, it was money well spent. Even though it is not Belize's biggest, the second highest construction of the country can be found here. Including in the entrance fee is a small but interesting museum and a one-in-million-view over the entire region. Smart boys, those Mayas, exquisite sense of location. I decided not to visit the other surrounding Maya sites, as I just came from Copán in Honduras and will visit Tikal in Guatemala soon. There is such a thing as Maya-overload.
After I hitchhiked back in the back of a pick-up-truck sitting next to a bare-boobed lady breastfeeding her infant (safety measurements, why?), I met up with my friend Epy again. We were invited for dinner with the Mennonites, but now he also had a gay lover to think of. So we decided to accept his invitation to join him and his drop-dead gorgeous Australian friends for a few drinks. As it turned out, you can leave out the word 'few'.

Fast-forward in time: Epy is standing on the table in a see-through ass-accessible g-string, giving away a saucy strip show.
​​
Gotta love my host. 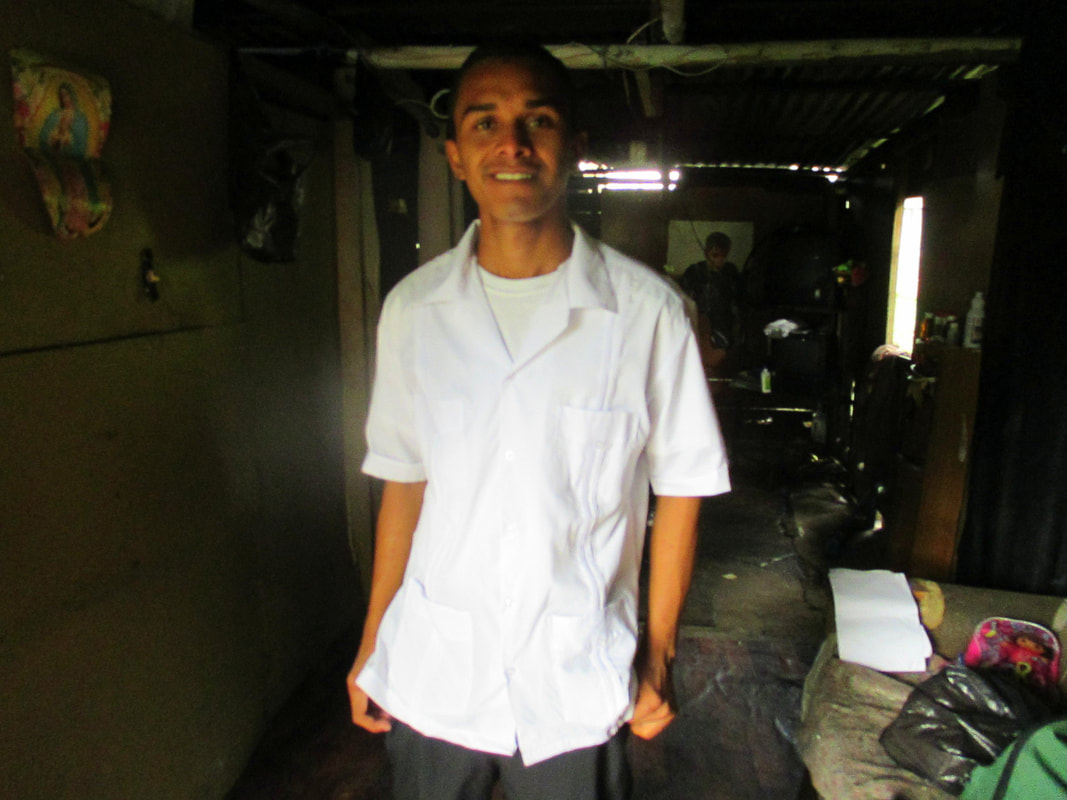 'Home' we didn't reach that night, but I could lay my head in a comfortable bed at the party villa for a few hours before driving up to Guatemala.

​A magnificent finale of an unforgettable time in Belize.

​
Related:
- Travel to Belize's cities: Belmopan & Belize City
- Belizian beach adventures: Punta Gorda & Sarteneja
- A crashcourse in the Belizian Kriol language
- Just across the border.... City of Mayas: Tikal, Guatemala
- The Mennonite community in Filadelfia, Paraguay
- Visit the Maya Ruins in Copán, Honduras
- Maya and Aztec heritage in Mexico: Merida, Izamal, Tulum, Palenque, Oaxaca, Valladolid and Mexico City
- Back to Inca heritage: Machu Picchu, Peru
- Inca museums in Arequipa, Peru
- Inca aqueducts around Cajamarca, Peru
- Inca heritage at Copacabana, Isla del Sol
- The MAAM Museum in Salta, Argentina and its Inca children
​- Korean culture at its finest: Explore Gyeongju!
In order to support the travelers’ community, I spend many hours per week to adequately document all information and advices for prospective visitors, accompanied by a (hopefully) entertaining insight into my personal observations and experiences. This service is and will remain free. However, if you voluntarily want to make a contribution and support my travels and thus the creation of new stories and information supply, here is the button you’re looking for:
Donate