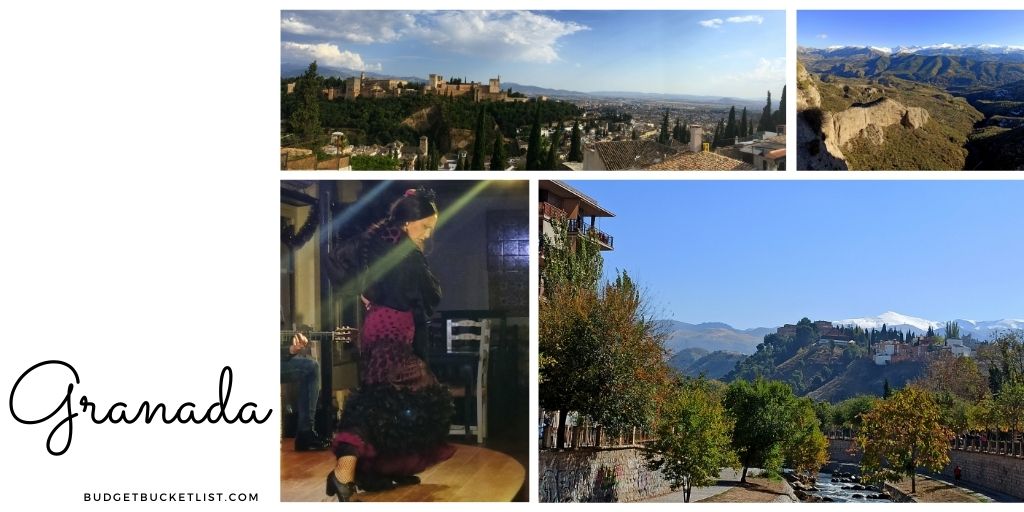 Six months after leaving Granada not for the first, but quite likely for the very last time, I wonder why I kept postponing the story. Generally I write my thoughts, experiences and especially feelings and observations regarding a specific location down as soon as the big fat check has been added behind it…  anxious to feel that very essence of a place slip away from the heart by that destructive concept called time. However, with Granada, that seems to be exactly what was needed. Let the dust settle a little.

Some places you just live a little too hard.

Not only was Granada the subject of my always present (am I really gonna use that chewed up and puked out word?)… wanderlust… in the peak of Spanish Covid, mind you… but it was also the stage of a whirlwind-relationship, a work quest and why not, the décor of determining meaning and direction. A place where I lived in a toilet-less campervan next to the local skatepark, in an ancient house in the Albaicín with an average indoor temperature of zero degrees, and in an actual gypsy cave. A place where I shrivelled away in the unbearable Andalusian heat, and where I strayed through the snow-covered peaks of the Sierra Nevada. A place where my entire rainbow of emotions matches the variety in contradicting experiences, all shuffled in the same Granada-deck-of-cards and generously handed out to those lucky enough to play this game. 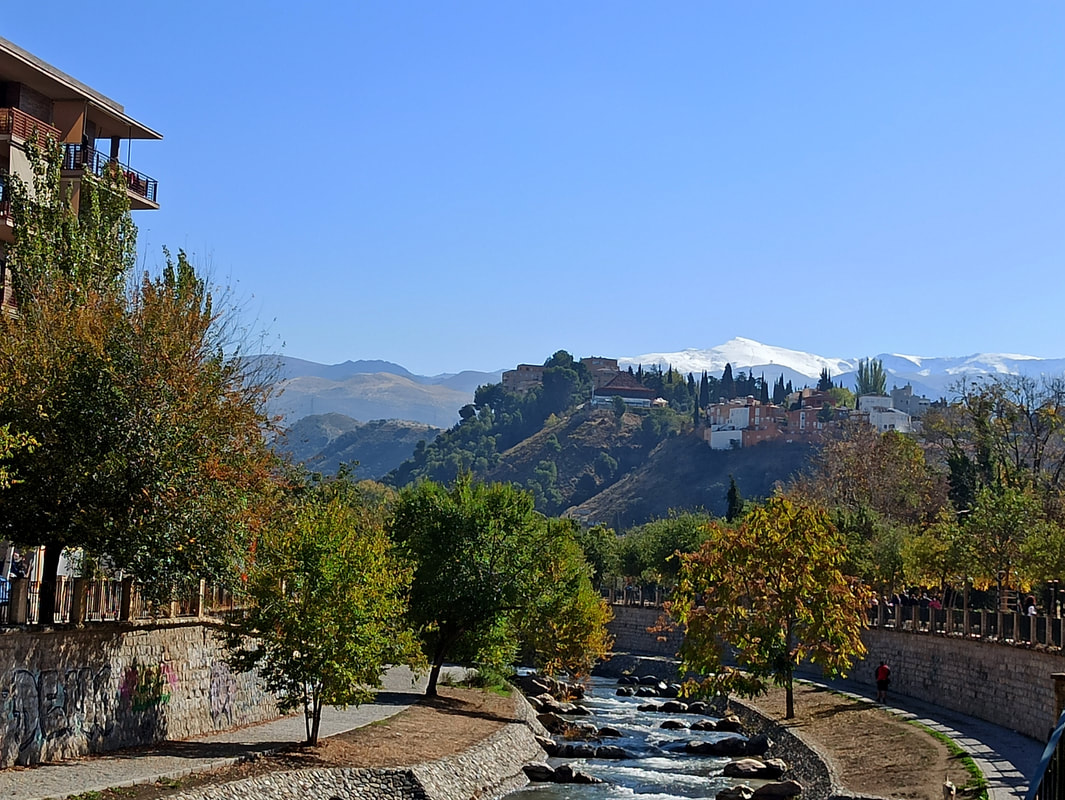 Granada means a 1001 things to me. Which is why I will try to keep it casual… like a clean coloring book tossed in your direction, waiting for your first move. Let me break the news to you straight away: When visiting Granada, be it for a weekend or an entire week, you will be unable to do it all. By any means, this is good news, as it allows you to mix and match and tailor your experiences to your own personal interests. For an intriguing and varied experience I recommend having a look at the below and cherry pick one or two sights/activities from every category, to allow yourself to soak up the different flavors of this oh so diverse city:

Of course, let’s start with my absolute favorite. To me, the greatest appeal of a city is its nearness to nature. That said, I personally prefer to indulge in a 100% flora-and-fauna-encounter without necessarily having any city involved to begin with, but if I happen to be in an urban environment, an easy way out back into the wilderness is by all means crucial for my mental health. Granada got you covered! I could peek out of my cave and literally stare into Parque Natural Sierra de Huétor and the Alpujarras. It’s magnificent. We’re talking proper rough trails here, challenging for the knees and soothing for the eyes, covering patches of one of the many Camino’s de Santiago: Camino Mozárabe, stretching 1500km from Andalusia all the way towards the Galician Santiago de Compostela (I personally completed the northern Camino Frances). Just take off in Sacromonte and head for the mountains, easy as that. You’ll find trails towards: Beas de Granada, Quéntar, Cenes de la Vega, Cañados Sereno, Cruz de Víznar, Puente Palo Loop, Río Verde, and Siete Lagunas. Another trail worth looking into: the 144km multi-day Alpujarra Trail.
Building up from there: Granada is breathing into the neck of the celebrated Sierra Nevada National Park, Spain’s biggest ski and snowboard resort in winter and a hiking haven in all four seasons. The trekking options are overwhelming and all equally satisfying. I recommend tracing down different routes on GPS-apps such as Wikiloc, Komoot or Outdoor Active (or be like me and just GO, and see wherever the hell you end up), but let me sum up some fav’s: Camino Real de los Neveros (towards Prodollano), Cerro del Sol, Güéjar Sierra, Cahorros, Vereda de Estrella Loop, Silleta de Padul, Trevenque, Hoya de la Mora and of course the Mulhacen, the highest peak of Spain. And if you’re really pressed for time: you can squeeze in an afternoon mini-trek, basically within the city walls, on the paths of Dehesa de Generalife, the wild gardens of the famous Alhambra.

In my life, nature and sports are unavoidably intertwined in order to extract some necessary joy out of the activity of getting fit… and for me that all leads to my favorite pastime: hiking, and in the winter: skiing. So I always get a bit carried away when talking about these options. Obviously, Granada offers more than just these outdoor sports. We’re talking rafting and kayaking in the Alpujarras, ziplining in the Sierra, canyoning in Río Verde and climbing at the Via Ferrata, to name a few options. Who said holidays were all about relaxing?​
Culture, History & Museums

Sure enough, I might be a forest woman instead of a city girl… but let’s face it, those Spaniards know how to build shit. No matter how disputable their actions might have been in the past, if we for example let our thoughts drift to their conquered colonies in Latin America and all atrocities involved in those endeavours… almost every cultural destination worth visiting there was once erected by their Spanish intruders. So, imagine Spain, the source!

In the case of Andalusia (from Arabic: Al-Andalus), we can add a delightful twist of Moorish influence to the formula, resulting in this exquisite love child of architecture, still to be admired today. It goes without saying that your very first stop will be the Alhambra (Al-Hamra), the mind-boggling fortress formerly inhabited by sultans and royals to rule and reign, and nowadays rightfully recognized as a UNESCO World Heritage Site. The Moorish eye for detail in decoration can be described as nothing less than extraordinary, while when we zoom out on the structure as an entity, the poetical description “a pearl set in emeralds” seems properly appropriate, looking at its jaw-dropping location amidst the rolling slopes of the south. Covid-19 assured zero waiting times and quite astoundingly so allowed me to share the entire complex with only 3 other lost tourists… but in “normal times”, plan ahead and book your tickets at least 2-3 weeks in advance.

Included in the Alhambra complex are the Museo Arquelogico, Museo Alhambra, as also Museo de Bellas Artes in Palacio Carlos V. These are included in the ticket, but can also be visited separately and are free of charge for students and EU Citizens (bring credentials / passport). Other recommendable museums, accessible for a modest fee, are Museo Memoria de Andalucía, Museo Lorca, Casa de los Tiros and Palacio de los Olvidados. Museo Sefardi is free on Sundays, and Saturdays from 2PM on. As is quite usual in Spain, the love of God comes at a price, and architecturally interesting sights such as the Cathedral and Royal Chapel charge an entry fee… but can be visited for free if you attend mass (which can be too much to ask, I know – wouldn’t make that sacrifice myself either).
Besides the ongoing need to visit, see and “check off” certain sights and places, please also allow yourself to stand still or peacefully wander. Head to the Alcaiceria, the Calle Teterias, Plaza de la Romanilla and Carrera Darro to find something new within the slightest eye movement. Not only in sights, but more so in its people. Granada breathes culture. Not only the culture of the Moors and Reconquista, but more recently: the Gypsies, leaving a strong mark on nowadays culture. However the Spanish like to look down on these notorious roaming vagabonds, the gitanos, these are the ones that brought them Flamenco, a wave they gratefully surf and mark as “typically Andalusian.” Bubbling up from the steep ‘n swirling streets of Sacramonte, one can hear the emotional shrieks and heart-shredding weeps of the guitars echoing from the caves straight back to recent history… the rhythm of the castañetas ticking like a clock back in time, whereas simultaneously time stood still and never deteriorated its relevance. Flamenco cuts straight to the soul and sucks you right into its pure intensity. Visit a performance in Casa del Arte, El Templo de Flamenco, Carmen de las Cuevas, La Luna de Lorca, next to my former cave-house in Venta el Gallo, or like me: in Jardines de Zoraya.​
Left: Streets of Granada - Right: Sacramonte, the Gypsy Cave I lived in, and Flamenco

“Food is everything we are. It’s an extension of a nationalist feeling, ethnic feeling, your personal history, your province, your region, your tribe, your grandma.” (Anthony Bourdain). A delicious way to dive in deep. In an attempt to eat my way through Granada, you could say I had a head start by dating a local chef willing to vegetarianize every local dish tossed in his direction. The options are nevertheless endless, and you’ll have to schedule in some extra daily meals to reach the finish line… but I know you will. An overview: 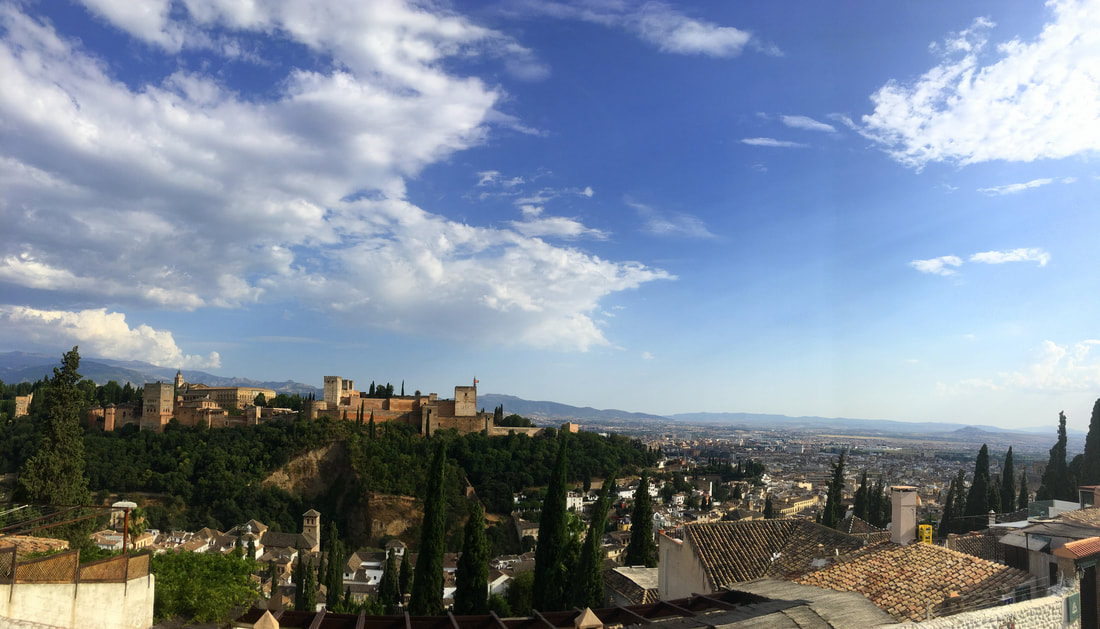 Read more about the Top Places to Visit in Andalucía!
In order to support the travelers’ community, I spend many hours per week to adequately document all information and advices for prospective visitors, accompanied by a (hopefully) entertaining insight into my personal observations and experiences. This service is and will remain free. However, if you voluntarily want to make a contribution and support my travels and thus the creation of new stories and information supply, here is the button you’re looking for:
Donate
Related:
- Walk like a pilgrim! 6 weeks on the Camino Frances towards Santiago de Compostela / Finisterre (900km) - check the reports here!
- Another citytrip in Spain: Barcelona, Malaga & Sevilla
- A (doomed) daytrip to Gibraltar
- Just across the border: The sublime Algarve coast in Portugal
- Discover more Belgium: Antwerp & the most kick-ass Flanders itinerary!
​- Explore Cyprus: Check out the Cyprus Nature, Cyprus Top-5 Cities and the North Cyprus Blogs!
​- 8 ways to save money in Vienna, Austria
- In search of Harry Potter: Rowling's hometown, Hogwarts, Hagrid's Hut and a ride in the Hogwarts Express
​​- A visit to Lord of the Ring's Hobbiton [Matamata, New Zealand]
​- A housesit next to a Lord of the Rings film location: Port Waikato, New Zealand
​- Europe's best skiing & hiking: Get your ass over to jaw-dropping Switzerland!
​​​- An unforgettable housesitting experience: Cromwell [New Zealand], the hotspot of hikes and wines​
​- Citytripping in Denmark's capital: Copenhagen
- Where modern meets classic: Vilnius, Lithuania
- Medieval Holland kept alive: Den Bosch & Haarlem
- A capital surrounded by scenic little villages: Lisbon, Portugal
- Where city and nature meet: Edinburgh, Scotland
​- German gems: Aachen & Frankfurt am Main
- Unravel the mysteries of Serbia
​​- Diving into Malaysia's history: Melaka
​- Korean culture at its finest: Explore Gyeongju!
​​- The psychological start of a journey... in the city of Marrakech [Morocco]
​- 10 typical Dutch celebrations no traveller should miss out on
​- Discover Romania's enjoyable cities: Bucharest, Brasov and Cluj Napoca
​- The prettiest historical town in Romania: Sighisoara!
​​- History preserved: Time capsule of Romanian culture Maramures
​- Budget Bucket List hitchhike trip to... Kosovo!
​​- Discover the splendours of Turkey: Istanbul on a Budget & Reasons to visit Edirne