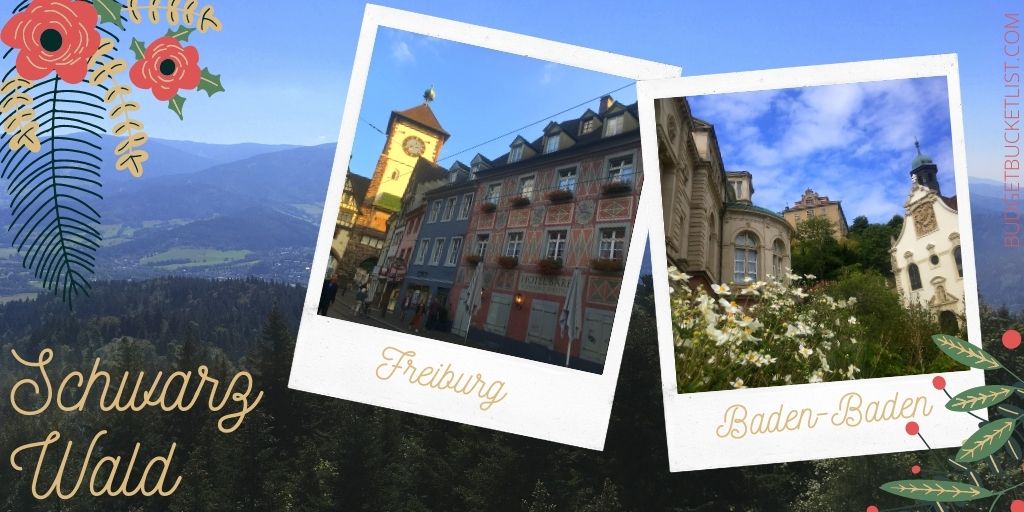 I have no idea why, but when I hear the word ‘Germany’, my mental connections usually take a direct shortcut to Rammstein-style shouting people and the Rührgebiet. I guess B-class Hollywood war-blockbusters officially ruined me… or my grandparents who actually lived through entire WWII and hate everything-German did, being in their fair right to do so. But I honestly should know better. Germany, rubbing shoulders with my homeland, is one of those countries of which I officially lost count of my many-many visits. Yes, I passed above-mentioned Rührgebiet every damn time on my way to the stunning Alps, and yes, that climate and their long grey Autobahnen wouldn’t necessarily make it to a postcard… but, wow, do they have some absolutely stunning cities, natural parks and hiking trails! And you know what, those serious rule-loving Germans really aren’t that bad either (for some reason I keep on getting entangled in lasting friendships “wiz ze Germans”, so they must be doing something amazingly right).

Too busy to read now? No problem, save it for later!
​Save on Get Pocket | Save in Browser Bookmarks| Save on Instapaper
Take the Schwarzwald for example, the Black Forest… with a name like that you already scored enough points to qualify for a visit. So off I went, hitchhiking all the way from Switzerland along that same straight Autobahn, where speed limits are officially scraped off the lawbook (not kidding – rules everywhere, except when it comes to their beloved highways). And I must admit, after drooling over the photos and stories of my friend’s hiking trip along the ‘Westweg’, expectations were pretty damn high. I decided to focus on the western side of the Schwarzwald, for the not-too-exciting reason that I simply didn’t have more time. Luckily, my entry points were spot-on, and deliciously different in their very essence, offering a diverse experience within my extremely limited time frame.

Best advice received in life: Eat dessert first… I mean, who knows what comes next, might be another dessert… or the dessert might have gone moldy by the time it’s finally your turn to dig in. Long and unnecessary intro to just try to convince you to drop everything you’re doing and haul your ass over to Freiburg. Preferably on a rusty bicycle or a skateboard, picking up a gluten-free cupcake along the way.
I had heard the rumours about Freiburg’s beauty, not containing a single lie, but what truly sucked me in was its casual, free, happy-go-lucky street culture unfolding itself in between the traditional German architecture almost looking like some well-done movie set. Without forcing it, or trying to be something that it’s not, like you see so painfully often in the newly popular ‘hipster culture’ nowadays. You can easily feel how Freiburg contains the same epitome as it must have had in the 60’s, growing along gracefully with the current Zeitgeist.
​
It’s pretty straightforward: Freiburg lacks everything I generally loath in cities, while generously offering every city-advantage and more. I mean, I could just leave the house of my Couchsurfing-host Blake (an American globetrotter quite understandably finding himself unable to leave Freiburg), cross the street and literally be in the Black Forest. I know, it’s nuts. And I’m not talking about some crappy, polluted side-trail of the Schwarzwald – no, within an hour you got rid of every shred of civilization. A simple dialogue between you and nature.
It’s a face of Germany that’s so present and representative, but somehow it’s not the first image that pops up. Yet, the narrow ravined valleys, round summits and rugged, granite clearings bring that necessary bit of roughness and unpredictability to the general planned and organized mentality of its inhabitants. A pure encounter with the wild: uncontrolled and endlessly exciting.

I returned downtown. Soaking up the strange sensation of not feeling sad about having to exchange all blessings of nature for an urban environment. Shreds of street music reached my ears, glimpses of people sprinkling their feet in the Dreisam river. Colorful graffiti not criticizing or insulting, but welcoming cultural diversity and promoting inclusion. Aromas of home-grown food, smokes of home-grown happiness. Friends sitting on the dusty streets, cats crawling around brown bookshops, no art unworthy of being explored and exposed.

It’s so good, you have to say it twice. A name not only repeating itself, but, also not too original, exactly describing what it offers: Baths, called Baden in German. Alright then, after Bath in the UK and Baños in Ecuador, places with – you guessed it – fantastic natural thermal baths, it’s now time for the German version to make its way onto my bucket list. And as could be expected, they do so in full force. Where Ecuador offers some modest natural pools tucked in between the mountains, and England morphs a sauna or two in the historical building at hand, there comes Germany: Pumping a full-on 4000m2 modern spa out of the ground, with endless supplies of swimming pools, aroma caves, brine inhalation chambers, whirlpools, steam baths, solariums, meditation areas, infra-red rooms and more sauna’s I could ever care to count. If you’d come in there with an entire football team, incl. their back-up players and their wives and mistresses, everyone could just disappear in his/her very own sauna. Caracalla Spa is so big, I literally experienced sauna-stress. I was running from place to place showing severe symptoms of FoMo, hastily sitting down in every single Dampfbad and Rüheraum, before running to the next. Naked, that is. In Germany you can’t mess around with swimsuits or other prudery, we’re going full FKK!
​
To clarify: There’s not just one of these mass-complexes, there are fucking twelve of ‘em. Baden-Baden doesn’t accept any competition, we get it!

Sorry, just had to share this screenshot with you. The most German photo ever taken in sauna-context (be it slightly misleading as they actually wear towels) – including of course a link to the clear and organized overview of the RULES next to it. You can’t just go to the sauna and wing it, mein Gott!


Besides baths, Baden-Baden has more to it. Not much more, but with the Schwarzwald literally at your doorstep, what else could you possibly need? You don’t even have to walk towards the woods, the entire city is already kind-of in it: Just blindly pick a direction and you’ll eventually end up on a trail, period.
​
That said, it offers an entirely different experience than loose ‘n lazy Freiburg. Where the prior is more grounded, studentesque and fringy, Baden-Baden is downright fancy. And full of old people. Can’t blame them: some fresh forest air, an upscale cityscape full of well-preserved classic architecture (straight from the good old days) and a wellness retreat around every corner to beat the rheumatism. I’m pretty sure it adds a few extra years to the equation… and I guess in Baden-Baden it’s worth sticking around for a little longer.
In order to support the travelers’ community, I spend many hours per week to adequately document all information and advices for prospective visitors, accompanied by a (hopefully) entertaining insight into my personal observations and experiences. This service is and will remain free. However, if you voluntarily want to make a contribution and support my travels and thus the creation of new stories and information supply, here is the button you’re looking for:
Donate
Related:
- Spend a weekend in Frankfurt am Main!
- The perfect daytrip from Aachen: Maastricht & Southern Limburg gems
- More of the Netherlands: Den Bosch, Haarlem & Nijmegen... and 10 typical Dutch celebrations you shouldn't miss out on
- More metal in Holland: Into The Grave Festival in Leeuwarden
​- Discover more Belgium: Antwerp & the most kick-ass Flanders itinerary!
- Europe's best skiing & hiking: Get your ass over to jaw-dropping Switzerland!
​- Visit Europe's mini-countries: Gibraltar, Liechtenstein, Luxemburg, Kosovo & Wales!
- Relive history in Austria's majestic capital Vienna
- Unravel the mysteries of Serbia
- More European city-tripping: Copenhagen [Denmark], Vilnius [Lithuania], Frankfurt am Main [Germany] or Glasgow [Scotland]
- Where city and nature meet: Edinburgh, Scotland
​- Budget Bucket List hitchhike trip to... Kosovo!
- The prettiest historical town in Romania: Sighisoara!
- The 3 golden rules to travel Sofia on a budget! & Why you shouldn’t miss out on Plovdiv! [Bulgaria]
​​- Discover the splendours of Turkey: Istanbul on a Budget & Reasons to visit Edirne