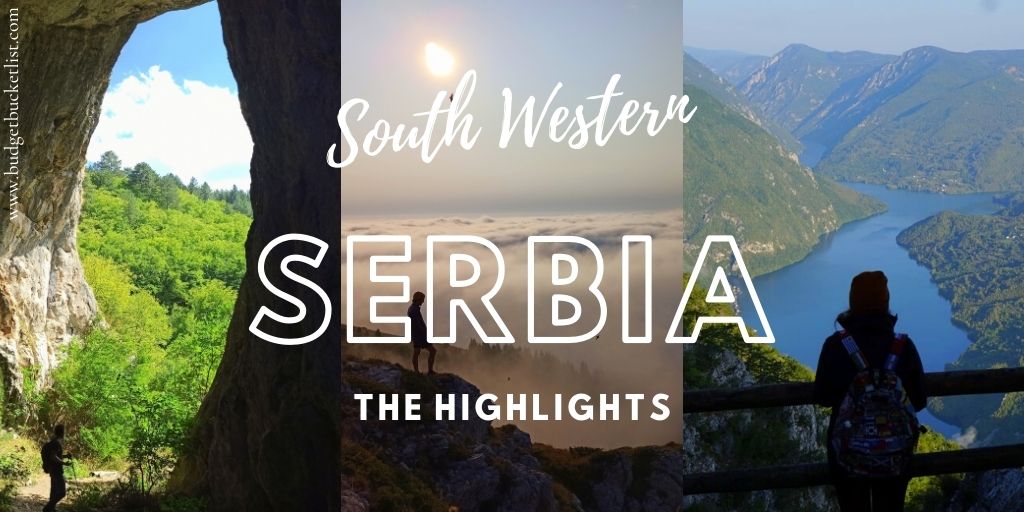 I went to Serbia twice. The first time I focused on a handful of cities (Belgrade, Niš and Pirot) and rapidly moved on… The second time I let natural encounters take the forefront, which resulted in me staying an entire month, unplanned. Why? Because it was much better, that’s why.

It requires a bit of an effort, as public transport perfectly connects the cities, but leaves a lot to desire when it comes to the national parks and other treasures putting Serbia truly on the map. To give an example: I once spent about 8 hours on 100km, trying to travel by local buses. However, it unquestionably is an even bigger loss of time and resources if you made it all the way to Serbia, but don’t get to experience it as you should (come on, you can’t convince me f*cking Belgrade was worth the hassle). The good news is that Serbia keeps all the goodies relatively in the same corner. Admitted, the south-eastern Stara Planina is an absolute gem and I recommend including it in your trip by all means… but if you’re stressed for time you can get away with concentrating on the south-western side, an exciting conglomeration of the most enthralling natural wealth of the biggest country of former Yugoslavia. So brave travel folks, gather: Team up to divide the cost of a rental car among 4-5 globetrotters or put on your bold hitchhike-shoes¹… you’re going west! 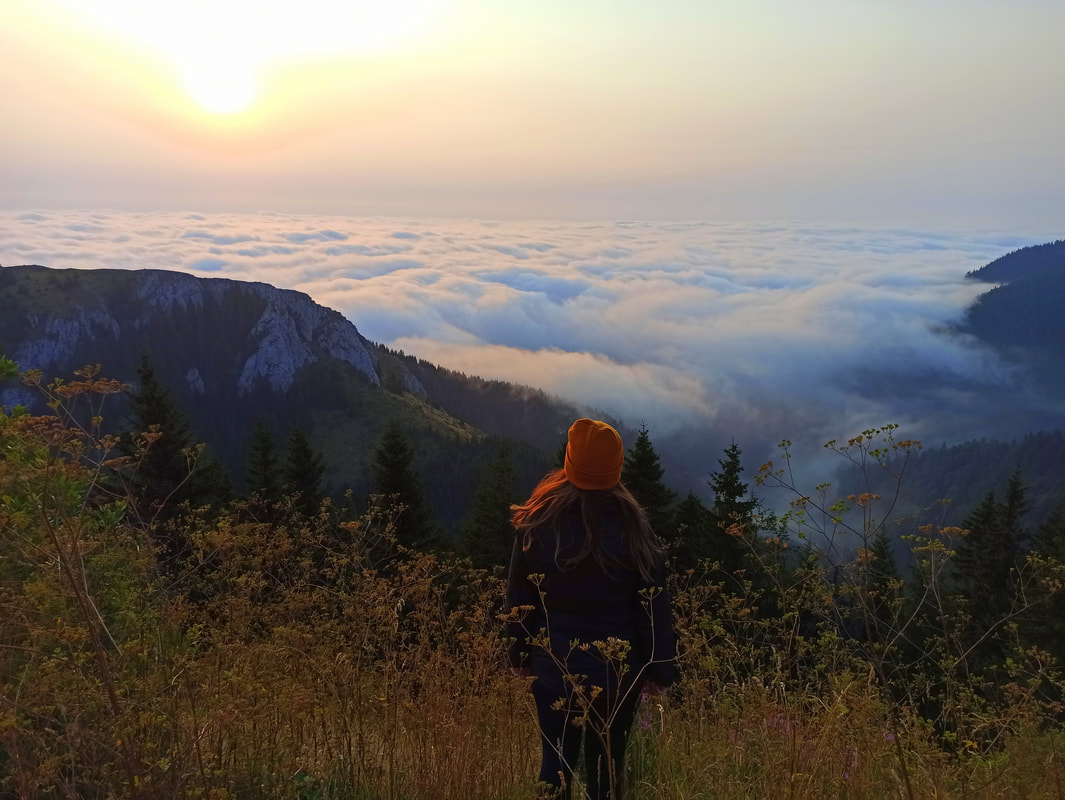 Too busy to read now? No problem, save it for later!
​Save on Get Pocket | Save in Browser Bookmarks| Save on Instapaper
Tara National Park

Tara National Park equals the highlight of Serbia for many… and also for me. It’s hard to not be impressed by this magnificent stretch of the Dinaric Alps, rich in dense forests, majestic peaks, rugged gorges, and lakes such as the famous Zaovine. The thick beech, spruce and fir woods take on 83.5% of the park, making it the greenest area of the entire country. The nickname “The Lungs of Serbia” is therefore well-deserved. Such an environment inevitably shapes the home of a great variety in wildlife, including the wolf, mink, marten, deer, wild boar, wild cat, chamois, 135 different bird species and… brown bears! Since both their species and their living environment have been placed under official protection, their numbers began to rise. More good news: No matter how wild and unspoilt the Tara area still is, under the flag of ‘national park’ it’s just domesticated enough to make it accessible for us visitors to fully enjoy its grandeur. With a total of 290km of hiking trails and bicycle paths and no less than 10 scenic viewpoints*, it’s pretty straightforward to have that one-on-one encounter with Serbia’s best nature in an adventurous, outdoorsy manner. Besides biking and hiking, there are facilities for kayaking, canyoning and rafting.

* Banjska Stena being the most visited, as it provides fantastic views over the Drina Canyon and Lake Perućac, which forms the natural border between Serbia and Bosnia & Herzegovina. From experience I can confirm that it makes for a pretty incredible sunrise spot. Find the most prominent lookout points on the park map below (if you save the image and throw it into Google Lens, you can have the Cyrillic auto-translated).​ 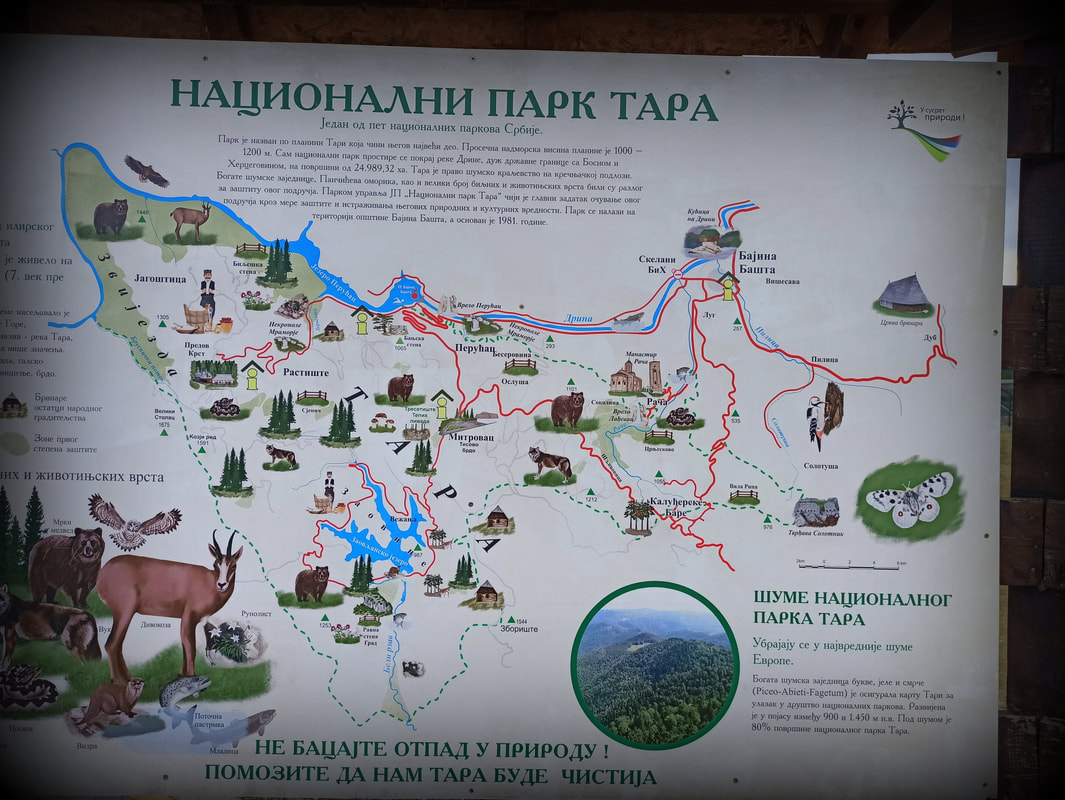 When I was looking for accommodation in the area of Tara National Park, I found villages such as Mokra Gora and Mitrovac which I considered “close by for exploration.” Little did I know that these small hamlets are actually located right inside of the national park itself. Besides being great bases for your Tara adventure, they are also full of unique character and radiate the type of peace you can only find when surrounded by forests and mountains.

Is Zlatibor the most picturesque town of Serbia? No, it is not. But it is very well-serviced and in the middle of everything, so it makes for a fantastic base. Relatively nearby sights, which are accessible with your own vehicle or by hitchhiking, include the Stopića Pecina Cave, the Gostilje Waterfall, the Kokin Brod area and the intriguing meanders of the Uvac river (east). The Tara National Park, described earlier, is also easily reached by car from Zlatibor (west).
That however doesn’t mean that Zlatibor doesn’t have any points of interest of its own. Did you know that the longest cable car in the world is actually located right here? Who would have thought, hidden in the depths of Serbia? According to the Guinness Book of Records Phu Quoc in Vietnam holds the record with approximately 8km… but this one is 9km and even crosses a lake. It gets even better: The end of the line is a perfect starting point to hike the actual group of mountains that is called Zlatibor, which the town was named after at a later stage once tourism took off (it was originally named Kulaševac). You can’t stay in a town called Zlatibor and don’t hike Mount Zlatibor, that goes without saying! This hike covers Ravni Tornik (a popular ski spot in winter) and the unusually shaped Jecmenska Prerast Cave… a true eye-catcher! Another hike I did and recommend is the trail leading to Mount Cuker, a high-up plateau to be spotted wherever you happen to be in Zlatibor Town. Without too much effort (mind that it’s rather steep though), you can assure yourself some sweet 360-panoramic views over Zlatibor and the surrounding area.

I recorded the above-described hikes to serve as a GPS guidance:
Hiking Notes: Mind that the Zlatibor loop goes hardcore in the end. We followed Maps.me, which is an app that fails miserably in the Balkans, and have to conclude that last few kilometres are definitely not a trail. It cuts through the forest and bends up to a ridiculously steep level, which isn’t ideal when you simultaneously have to slam yourself through a dense forest. We almost missed the last cable car back because of this hassle. Even though I prefer loop hikes, I recommend turning around once you reached and checked out the impressive Jecmenska Prerast Cave and walk the same (spectacular) route back. The Cuker Trail as recorded above is a shorter version of the original one… simply because I wasn’t aware that there was an extension. The full trail is recorded here.

The Serbians I spoke to believed that Zlatibor is a B-version of Kopaonik. When it comes to skiing, I believe it immediately… if only judging by the building pit we checked into during summer, the entire town temporarily being transformed into one massive construction site to get ready for a glorious high season: winter season. However, I definitely do not agree when it comes to hiking. With skiing clearly being the main focus of the area, I felt that hiking enthusiasts and summer / spring / autumn visitors are miserably ignored. Not only by “welcoming” them in a place-in-progress full of cranes and drilling noise, but also by basically destroying the trails and forests to make space for ski slopes. I get it, those take up a considerable amount of space… but I lived in the Swiss Alps and personally witnessed how you can in fact maintain an attractive trail network and mountainscape in sunny season, while having the same area in winter simply covered by a thick layer of snow to provide fun for the ski-folks (I belong to that group too). That said, if you don’t own or rent a vehicle, you have to balance uniqueness with accessibility, which makes Kopaonik a feasible stop to reach by bus. You can make your experience a bit more authentic by staying in the more unique and cheaper village 5km down the road, the original town of Kopaonik… it’s further away from the ski lifts, but full of local character opposed to the soulless pumped-out-of-the-ground structures “downtown”.

I completed three hikes in Kopaonik, of which I recommend one:3
On the way to Kopaonik, we shortly stopped at a village called Brus and loved it. I didn't stay long enough to fully advise you on this destination, but it's worth considering for an overnight stay.

I knew nothing about Uzice. I wasn’t even planning on staying the night, as it seemed just a convenient place to switch buses to move on to Zlatibor… but my travel buddy got hungry and we decided to grab lunch. And stayed. This place seriously radiates good vibes, a busy little hub scenically crawling up into the surrounding Dinaric Alps. It’s not a sleepy mountain town tucked into the absolute middle of nowhere, nor feeling like a city due to the dispersion of all the different districts spreading out into the different folds and corners of the mountains. It has a unique character of its own, not seeking any competition. A cool part of recent local history took place in 1941, when the Yugoslav Partisans liberated the town from Nazi Germany, and transformed it into a military Nazi-free mini-state in Nazi-occupied Serbia. This and more is covered in the National Museum (incl. a WWII bunker-tunnel), which is worth a short visit. To stretch the legs, follow the riverside promenade along steampunk-bridges and castle ruins.*

* I recommend admiring the castle ruins from a distance, as the hike up is entirely overgrown and rather unpleasant. Talking from experience.
Not recommended:

Footnote 1: Facebook Groups gathering Serbian and Balkan-based travelers include the following: Travel to Eastern Europe, the Balkans and former USSR & Travel to the Balkans & Looking for a Travel Buddy. Alternatively, you can post your request on Serbian / Balkan Couchsurf forums. Hitchhiking is not very common in Serbia and the rest of the Balkan, but people are likely to stop. I hitchhiked almost everything and can conclude it’s rather safe and doable, yet time-consuming (especially when leaving bigger cities, requiring you to first get to the correct road outside of town). Hitchhike with no more than 2 people to ensure drivers have enough space to take you along, especially if you also have a big backpack. Hitchwiki is a useful website. The Blablacar-app provides a cheap carpool solution, but just like public transport, mainly serves the cities.
In order to support the travelers’ community, I spend many hours per week to adequately document all information and advices for prospective visitors, accompanied by a (hopefully) entertaining insight into my personal observations and experiences. This service is and will remain free. However, if you voluntarily want to make a contribution and support my travels and thus the creation of new stories and information supply, here is the button you’re looking for:
Donate
​Related:
- Travel Serbia harder - Belgrade, Nis, Novi Sad and Stara Planina!
- Be about Bulgaria: Check off Bansko, Belogradchik, Plovdiv, Sofia and of course Veliko Tarnovo!
- Discover Romania's bustling capital Bucharest
- Experience the bright and dark side of Vienna [Austria]
​- Visit Europe's mini-countries: Gibraltar, Liechtenstein, Luxemburg, Kosovo & Wales!
​- Europe's best skiing & hiking: Get your ass over to jaw-dropping Switzerland!
- Get your Albania itinerary ready: Berat, Gjirokastër, Korcë / Ohrid Lake, Theth, Shkodër, Tirana, Mount Korab & the coast!
​- German gems: Aachen & Frankfurt am Main
​- Budget Bucket List hitchhike trip to... Kosovo!
​​​- Guest Blog 'Kosovo Girl Travels': Travel tips and stories from Kosovo's first and only travelblogger!
- Witness the many faces of Lithuania within the city of Vilnius
- Visit the crown of Scotland: the blissful capital of Edinburgh
​- Discover more Belgium: Antwerp & the most kick-ass Flanders itinerary!
- Dutch delight: wonderful Haarlem!
​- 3 reasons why you need to visit Nijmegen [The Netherlands]
​​​- Top-5 places to visit in South Limburg [The Netherlands]
​- Discover the splendours of Turkey: Istanbul on a Budget & Reasons to visit Edirne
​​- Check out Budget Bucket List's FAVORITE HIKING DESTINATIONS worldwide!
- Visit Balkan's finest: Montenegro's National Parks Blog, Kotor Bay & Lovcen NP and Cetinje, Durmitor NP, Podgorica, Prokletije NP and Montenegro's Coastal Towns Blog
​- Read about Bosnia & Herzegovina: Mostar, Blagaj, Trebinje, Sarajevo, Jajce, Banja Luka and Sutjeska National Park (incl. Maglic Peak - the country's highest!)