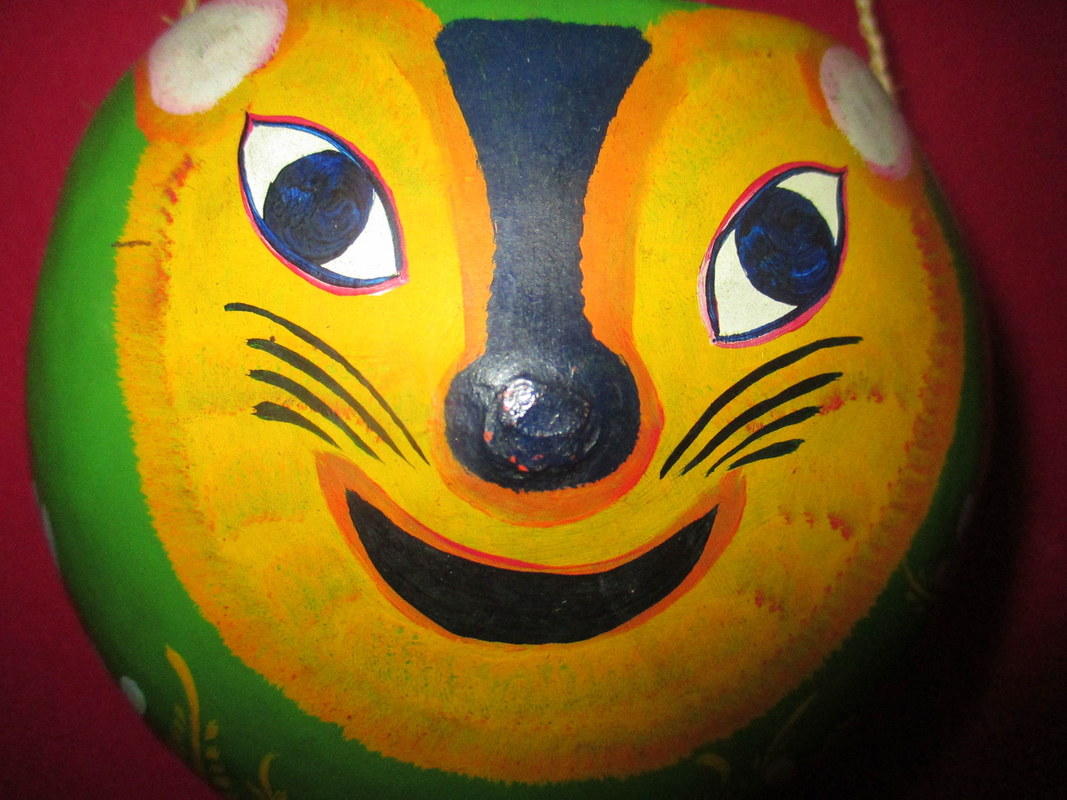 I was going to Mexico, a journey I wasn't looking forward to. Not because I wasn't excited about the country: On the contrary, going here is a childhood dream… But because I am a budget backpacker and can’t/won’t pay for a $30-shuttle from Xela (Guatemala) to San Cristobal De Las Casas. The alternative is nothing to cheer about:  First I had to take a minibus to the terminal, with my backpack loosely thrown on the rooftop, not tied up. From there I took a rattling chickenbus to Huehuetenango and switched to an even shabbier replica driving me to the border town of Mesilla. It should have taken 4 hours. Reality check: I almost hit 7...

And I’m talking serious uncomfortable hours: The driver drove so ridiculously fast and the road was so incredibly dreadful (as was the vehicle) I literally got launched of my 'chair' several times, my entire body flying in the air. I frantically had to hold on to the railing in order not to flatten the three other full-grown adults sitting on the same bench designed for two children (in Guatemala they drive end-of-life US schoolbuses considered unsuitable for the roads in other countries). With 100% conviction I can guarantee Guatemala has the worst public transport of entire Central America.  I have been travelling through Latin America non-stop for 1,5 year now, so if you wonder what the fuck I know: Enough! Even though I fell in love with Guate, I was never so delighted to leave the country after this roadtrip. 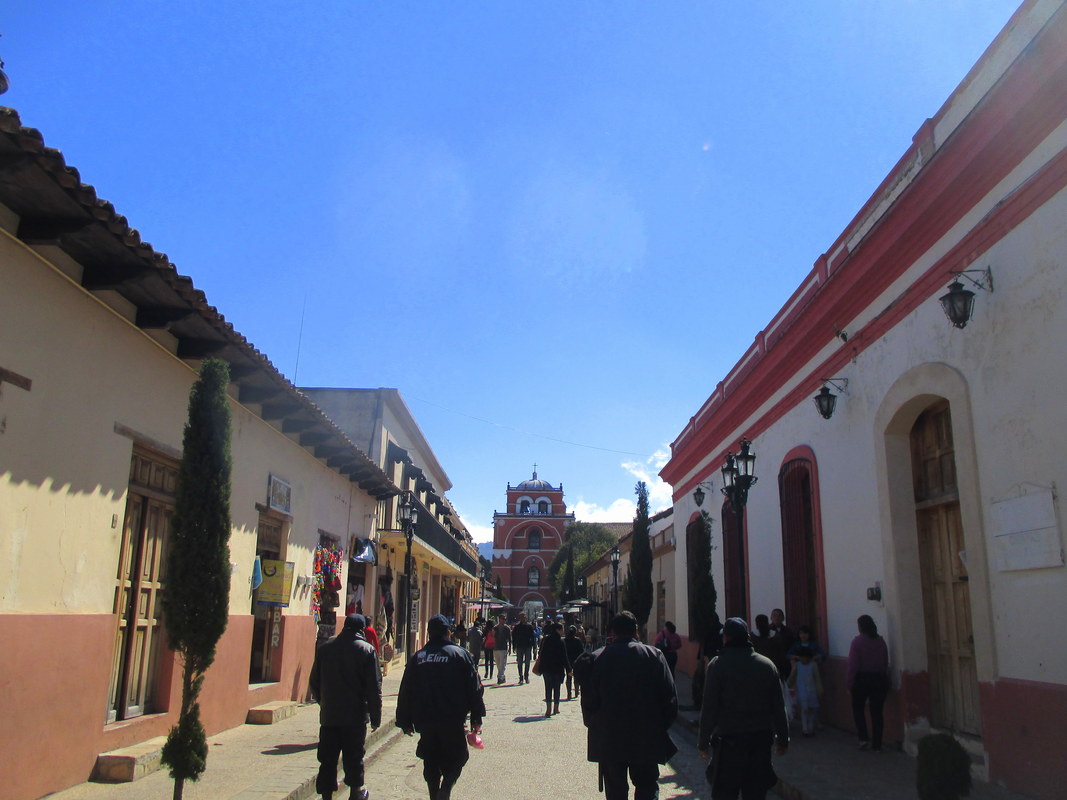 After high-fiving myself for having survived this trip I crossed Cristobal’s centre to track down the house of Couchsurfing-couple Will & Kate. To provide you with some kind of personality sketch: Endless travelling vagabonds in their late 40’ies, tattooed, bearded, bikers… If you look up Harley Davidson in the dictionary, most probably their photo would be displayed right next to it. Besides that, they are very very American, which is good news on the CS-front... The house they were hosting us in was gigantic: six bedrooms, eight bathrooms, a huuuuge roof terrace overlooking the entire town and a surface of about forty times the size of the place I lived in before travelling. Just so you know: They pay $700 a month for all of this. Yeah, I have no idea what the fuck I was doing for 950 euros a month (excl. everything) in my ini-mini-tiny apartment around Amsterdam.

After occupying my own private studio wine was served. What else can one ask for? Right, some heavy metal. Well, that was taken care of too. Sometimes I just really love my life.
After I slept in the best bed since at least two months I woke up renewed and refreshed. I decided to live it up to the max, exploring every patch of Cristobal. But first, I put on Kate’s jeans. Why, you ask? Because San Cristobal De Las Casas is bloody freezing and I’m only carrying along my tropical wardrobe. I’m Dutch, I know cold. But THIS is comparable to our autumn / early winter. That’s pretty damn cold for a place where houses aren’t equipped with central heating. I wore five layers and a scarf, and still I was shivering. Later that day I would buy a woollen hat, mittens and my own pair of warm pants, as I simply didn’t pack for this crap.

Besides the cold, I had some other first impressions of this lovely town: Cute, pretty, remarkably cheap (you eat for 50 cents and for 2 dollars you sit in a restaurant) and taking tourism to a whole other level. For some reason it reminded me of Cusco (Peru), but unlike that place, this was love at first sight.

Walking down the streets I felt so irrationally, foolishly happy.

The whole day I had this stupid grin on my face that I couldn’t possibly wipe off. San Cristobal De Las Casas, great vibes!
​I scored a map somewhere and decided to walk down to Museo De Las Culturas Populares. It had a small exposition of local artwork in all the typical colors and shapes that instantly pop up in my mind when hearing the word ‘Mexico’. Within five minutes I saw it all, but it was free, so you won’t hear me complaining.

A bit further down the road is the (also free) Museo De La Historia, located in restaurant Nuestras Raices. In a bunch of informational displays and historical artefacts I walked my way through the town’s history, telling a tale of tumultuous times. 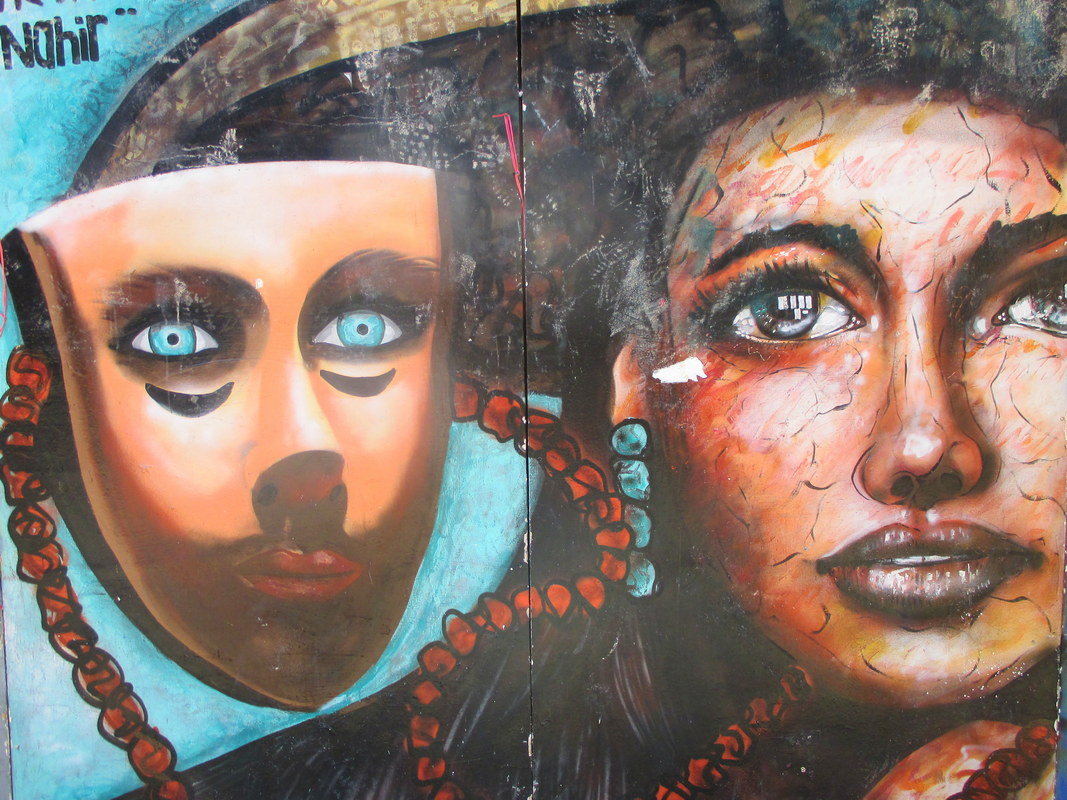 After visiting the hardly intriguing Iglesia La Merced in which I saw nothing I hadn’t seen before, I wandered around a bit until I stumbled upon the Cathedral which I admired from Plaza de la Paz (square of  peace). The slogans brushed on the walls didn’t tell a peaceful story at all though: “Alto al terrorismo del estado” -  “Juicio y castigo a los responsables del asesinado del compañero Hector Santiz Lopez. FNLS.” Back ‘home’ I looked it up and learned that FNLS is the national front of socialism, Frente Nacional de Lucho por el Socialismo, denouncing and publicly condemning violations of human rights perpetrated by the Mexican government, specifically those related to enforced disappearances, extra-judicial killings and arbitrary detentions. So what happens if you act as a human rights defender and publicly oppose yourself against government policies? You get killed. Like Hector and many others. And as a sadistic bonus they also torture your family. This is the year 2016 and this is still happening. I immediately signed up on the website Front Line Defenders and emailed the FNLS to see if there’s any way in which I could help.
​
Awareness is #1, so here you go.
I continued my walk to the Parque Central, where numerous scenes greeted my eyes. Shoeshiners labouring with honest dedication, vendors selling insects for consumption, indigenous men and women wrapped in fluffy bear-sheets managing their extensive heir, old cowboys tipping their sombrero when wishing me a buen día…

Everything I ever hoped Mexico would be and better. 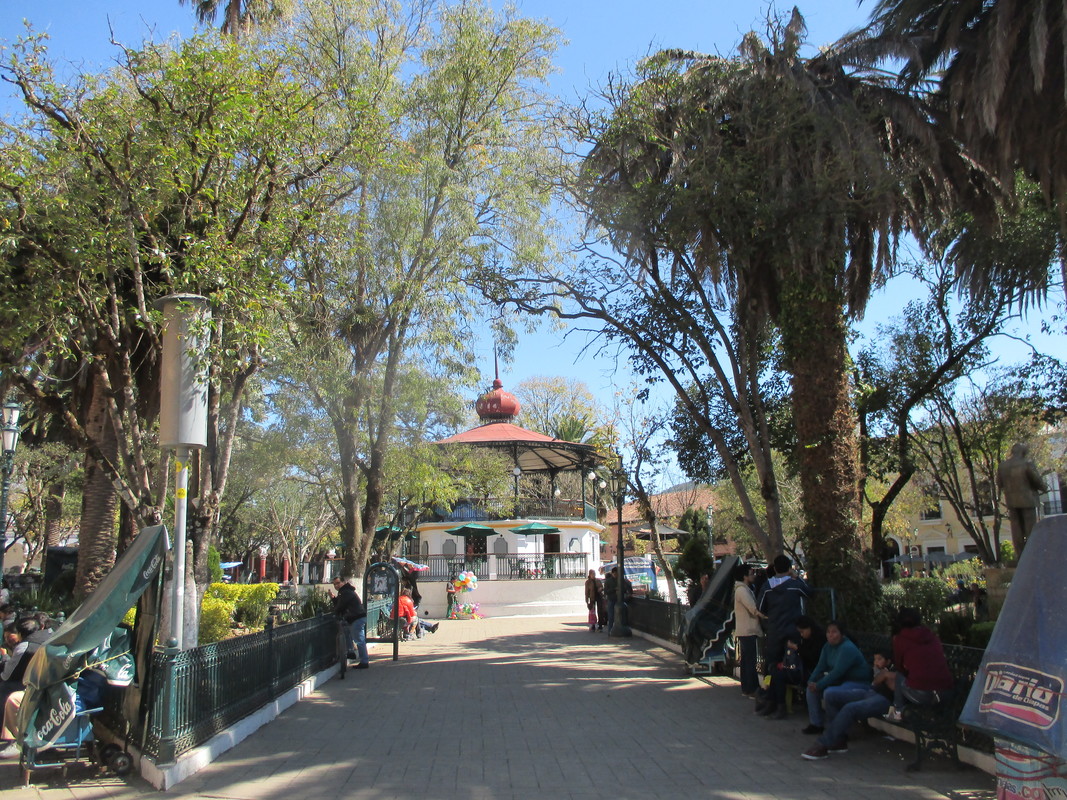 ​I advanced on the tourist street to find a place called Sala de Bellas Artes, right next to Arco de Carmen. In this sala I encountered a bunch of collages they were selling for cheap, nothing more and nothing less. Right next to it is Centro Cultural El Carmen that I subsequently delighted with my visit as well while I was there anyway. I stumbled upon 2 guys playing marimba (some oversized wooden xylophone), who promptly invited me to beat out some tunes as well. Well, hand me over the sticks, I’ll make it happen bro. I wouldn’t describe myself as a natural, but it was a local cultural experience par excellence. 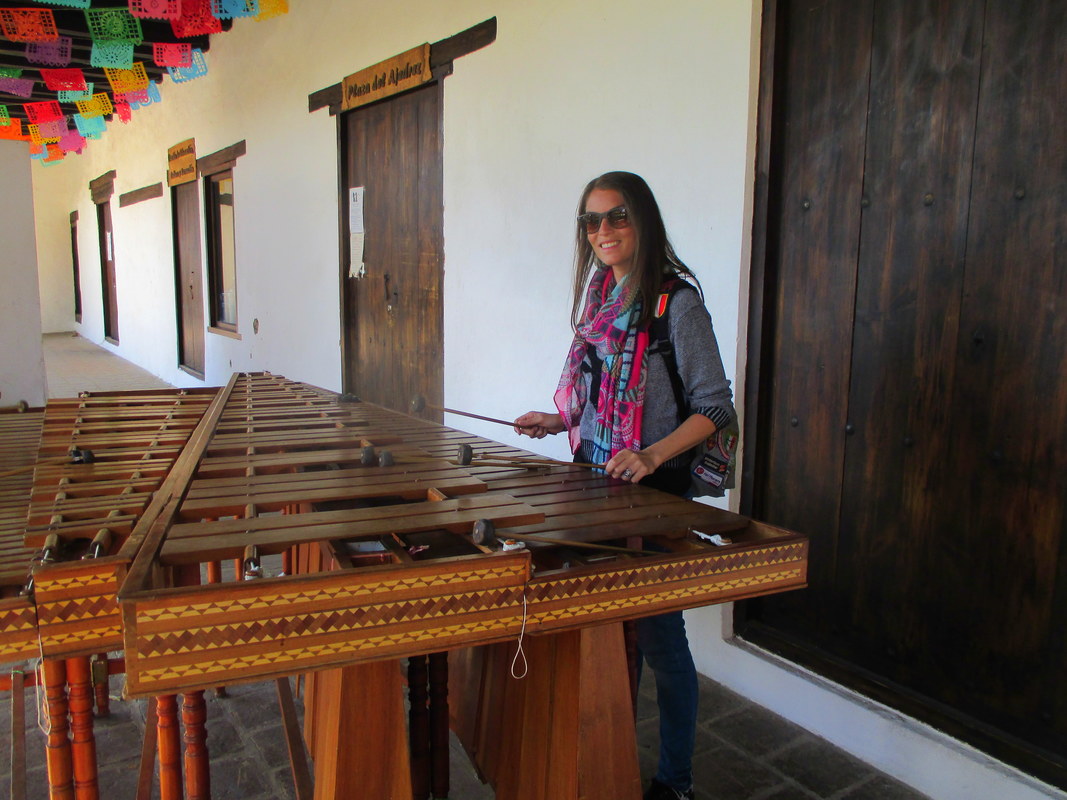 ​I decided to skip on the crafts market, as I can’t possibly stuff anything more in my backpack… but I’m a woman, so of course this was a failed mission. After spending an impressive 1,5 hours glaring at necklaces, shoes and cute little ponchos I continued my way to the ‘real’ market, the real deal. Well, I planned a 1001 other things for that day, but I lost myself here. This whole extravaganza of sounds, sights and smells completely enchanted me. It’s an endless spectacle I can’t stop watching. I decided to get myself some churros (okay only 1, I have an ass to look after) and let this streetlife just pass by in front of me.
I lost track of time, but nevertheless arrived quite punctually at the Teatro Daniel Zebadúa. That afternoon a poster promoting a folklore dance show caught my eye and as it was free I couldn’t think of a reason not to go. It was… amazing. In dozens of colourful, shiny outfits at least thirty dancers danced ‘the stars out of the sky’. And they kept on going, like the night had no end.

Suddenly something unexpected happened… I felt a tear rolling down my cheek. I suddenly fully realized where I was: In Mexico. Do you hear me? MEXICO. I saw 44 countries but for some reason going here has always been a childhood dream.

And now I suddenly sat there. Unbelievable. Mexico.
​The second day I was so overwhelmed with the options of things I could do that I hardly did anything. I focused on food instead. And that’s not quite the punishment, the gringo expat population that en masse settled down in Cristobal knows how to make bread. Nice, fresh, healthy, brown cereal bread: REAL bread. At last, the only country in Latin America? Oh and it only gets better: They do coffee too, and not only the Nescafe bullshit. Oh oh Mexico, you know how to make me fall for you, don’t you? And as everything is dirt cheap as well, I stocked up on vegan stuff and homemade peanut butter. Life is generous. 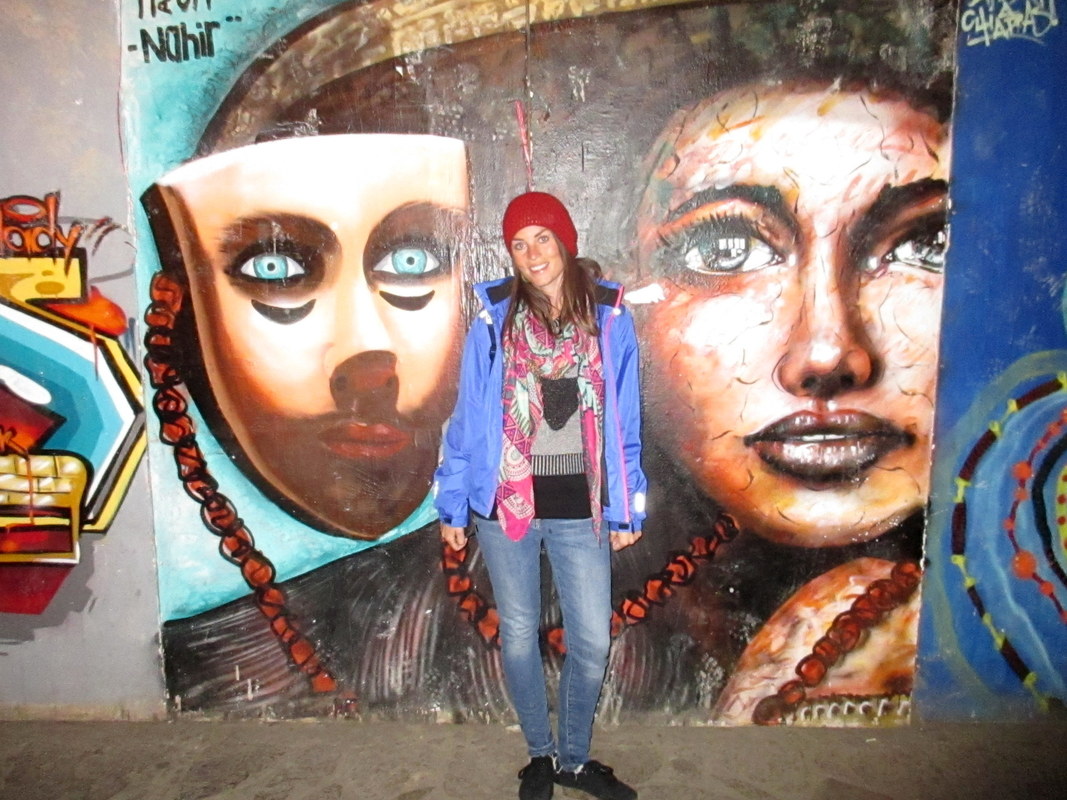 Okay, I had to have some culture in my day still, right? No probs, there’s about nine museums to choose from. I decided to walk to the Museum of Mayan Medicine… until I figured out this was on the ‘wrong side of town’. Now I’m not easily scared by that, but the roads got grimmer and grimmer and I noticed that my outfit consisting of a bright blue hiking jacket, red beret, sunglasses and a backpack full of travel patches attracted the wrong kind of attention. The guys with the tattooed faces and drug-stares were the deciding factor: Let’s turn around.
​
Na Bolom seemed to be an appropriate alternative. The museum first showed me an introduction movie familiarizing me with Frans and Trudy, a pioneer couple that used to roam around the Mexican jungle and got acquainted with some remote Mayan tribe excluded from all external contact. The museum basically displays everything they found there in order to honour and preserve this unique culture and its traditions. Alright! Thanks Frans and Trudy, cool stuff. 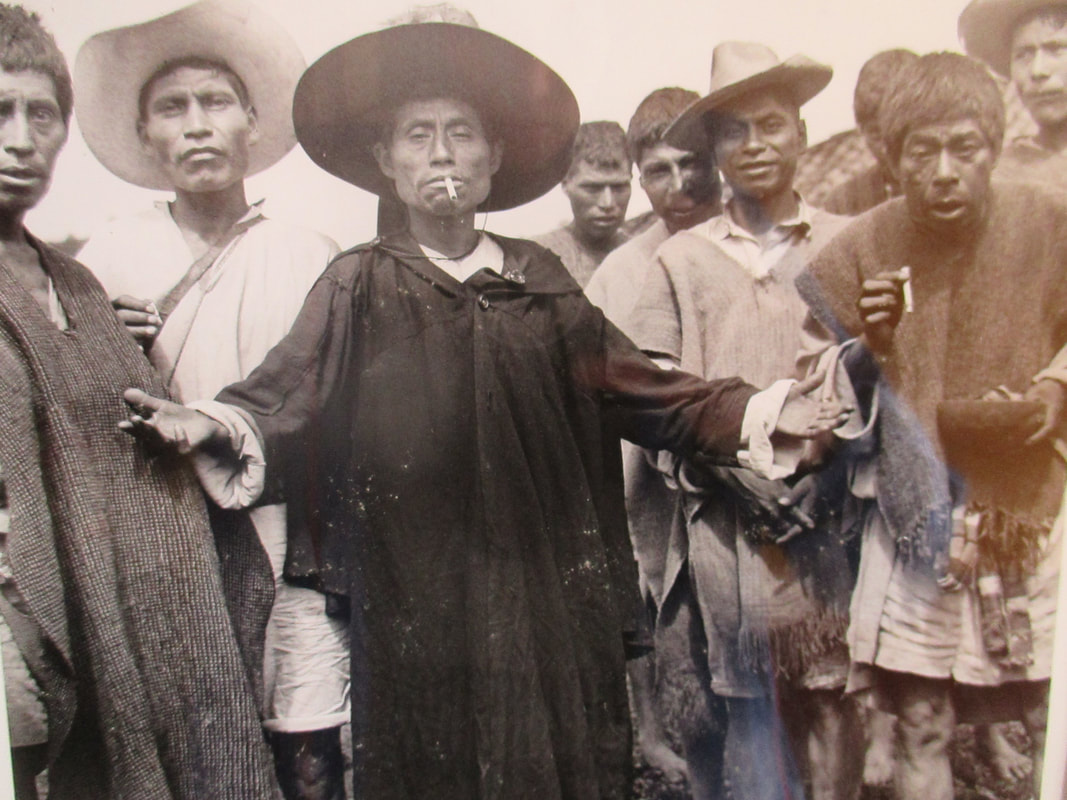 What else did I want to do? Mountainbike in the surrounding natural area, check out some more theatre performances, drink wine in real wine bars (yeah not kidding, it’s all possible here, for one dollar a glass!), climb Cerro de Guadalupe or Cerro de San Cristóbal, watch cheap arthouse movies in my own private room at Kinoki, visit some more of the many art galleries this place houses… Okay, stop dreaming. I was only Couchsurfing for three nights and the next host was expecting me in Palenque. So I left San Cristobal De Las Casas on its climax. Which is good, as I will fantasize about it for a while, longing for more.

If you ever want to live in Mexico, go for San Cristobal de las Casas. 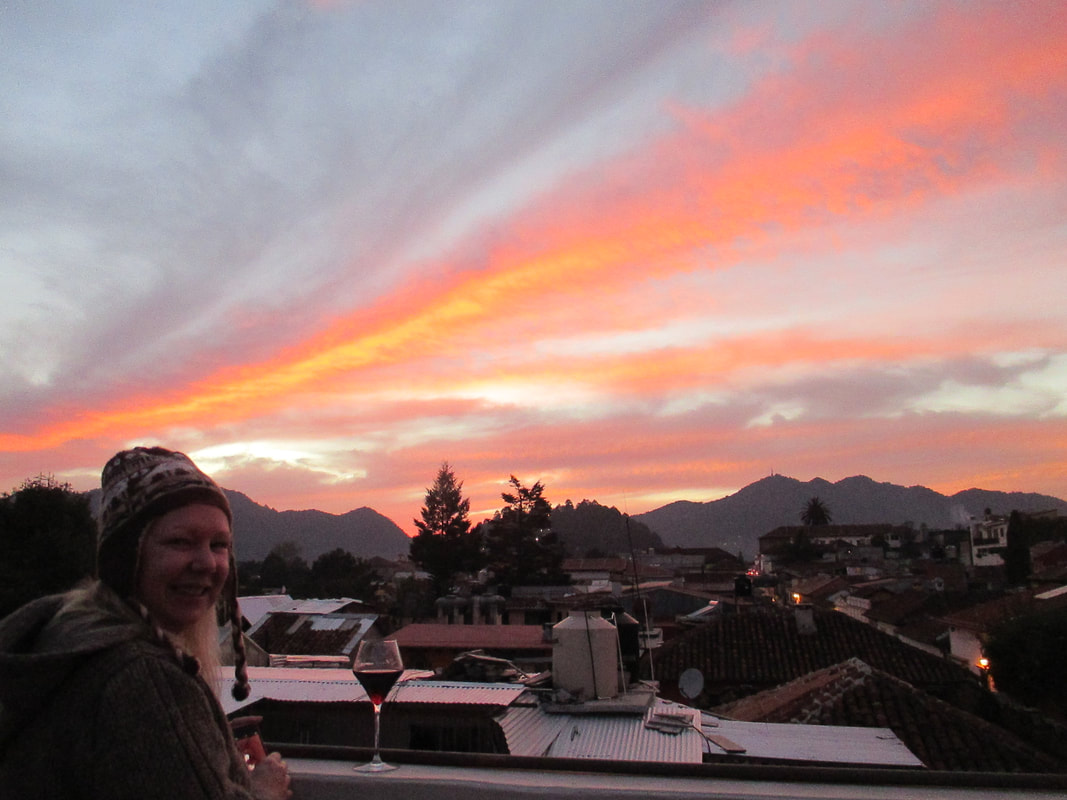