Download File
At this point in time I already stayed in Peru for over a month, as there is just so much to do here. I still wanted to go on a cargo boat to float down the Amazon in between the locals and their cattle, see the Peruvian beaches and do all the treks there are left in the fabulous Cordilleras. BUT… as I also want to be in Cali (Colombia) with Christmas to spend it with a local family, I needed to make choices and hurry up a bit. As some Googling taught me there are many cases of robberies, diphtheria, and worse: rape, on these non-touristy Amazon boats, I decided it might not be that much fun for a young blue-eyed woman alone to spend almost a week in between the drunken sailors. Beaches are everywhere, and I don’t have enough patience to lie down in the sun for more than 30 minutes anyway. So the Cordilleras it was (check the Huaraz blog).

On my way up to Ecuador I thought I might check out Cajamarca as well… which wasn’t ON THE WAY at all. First I had to take a 3-hour crappy bus up to Chimbote, where I changed to a 7-hour bus to Trujillo in which I had no interest of visiting. I was interested in a bed to sleep in though, and in the shabby run-down 1* hotel I found just that (forget about warm water… or water at all!). The day after I took another 6-hour bus to Cajamarca. Pronounced as Caggggggamarca. And yes, it was all worth it. 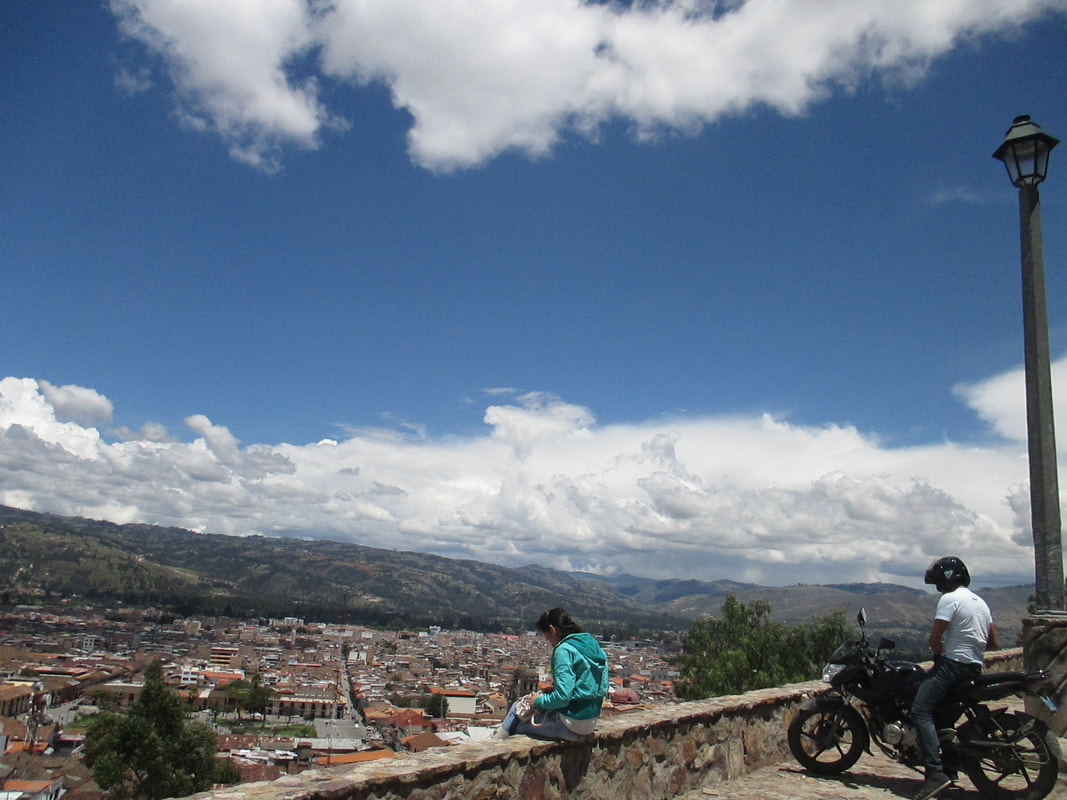 I checked in at a hotel next to ‘Heladeria Holanda’. Which is funny, as in my country all ice-cream shops are Italian. It’s ice cold there though. So that’s the same as opening up a sauna called ‘Sahara’, which is kind of brilliant actually. Wait, how did we come at this point, stop distracting me!
​
My hotel room made me feel like I was 9 years old again, as there were teddy bears nailed to the wall. So quickly I started doing what all grown-up adults do: drinking too much rum. I found a drinking buddy in the Canadian Jean-Philippe, who was together with me the only gringo in town. 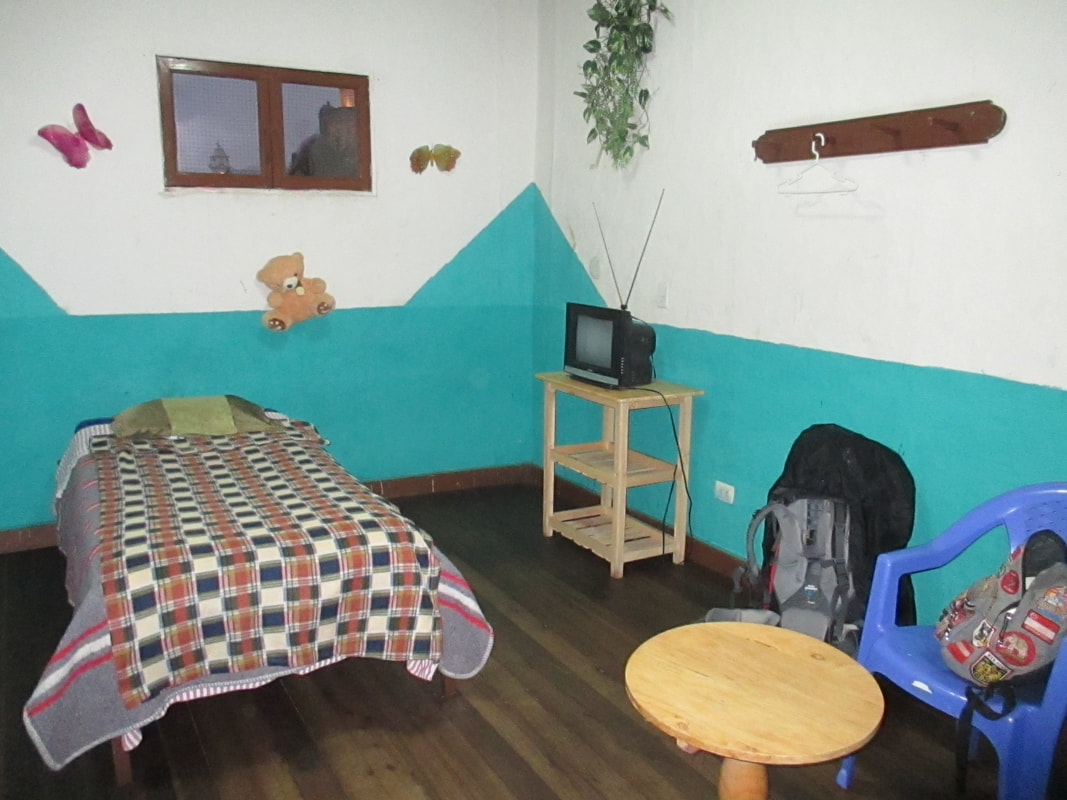 Not exactly in a straight line we headed to Gruta 100, the local dancing. Still wearing my ‘bus clothes’ I felt seriously under- (or over-) dressed in between the hotpants, barely-dresses and skirts that looked just like belts. The guys unfortunately didn’t compensate for all this female nakedness with incredible looks… Lucky JP, miserable me. I decided not to be Misses Cockblocker and left JP at the centre of the dance floor with his harem and fled out of the Gruta at 2AM.

Painfully hung-over I crawled to the most decent coffee bar I could find the morning after to get some caffeine in my bloodstream. 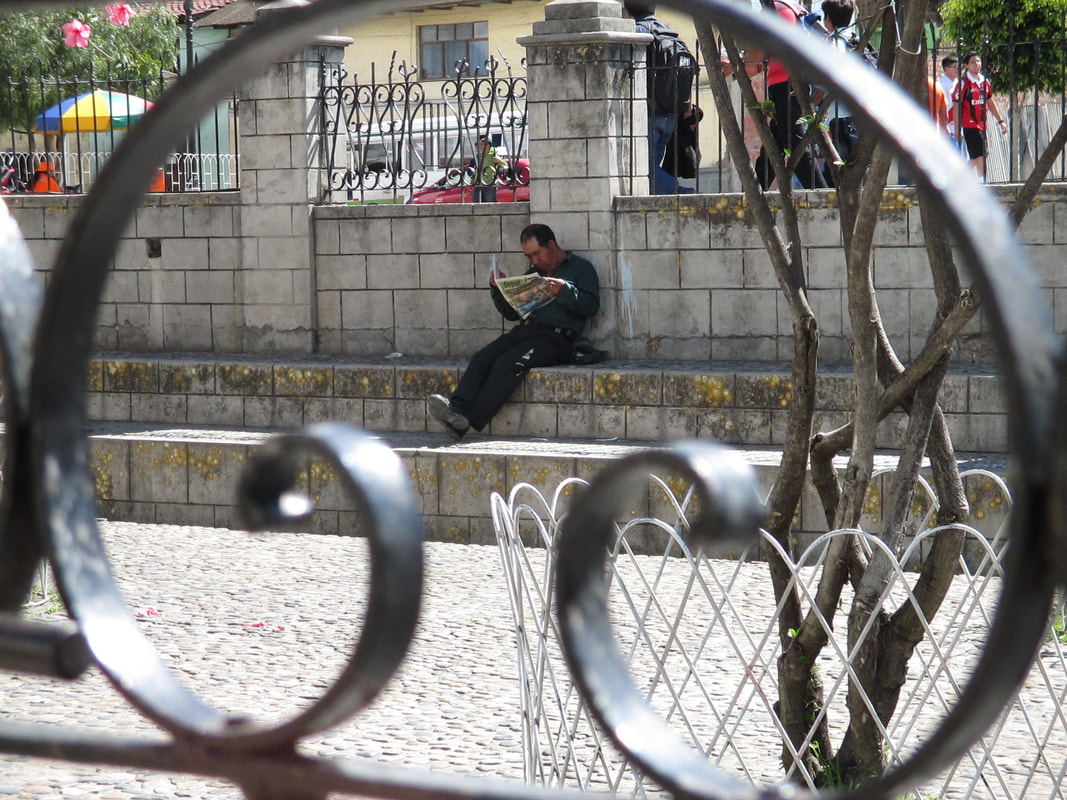 ​I wondered how appropriate it was to walk into Sunday mass with the smell of Baileys still coming out of my hair (cold showers are my excuse), so I admired the pretty churches from the outside.
​I sobered up at the gorgeous Plaza de Armas, where Christmas trees wasted away in the blistering sun. To get at least some physical exercise I climbed the stairs to Cerro Santa Polonia, where I was rewarded with wonderful look-outs over the entire city.
Then I took a colectivo to the natural hot springs Baños del Inca, where I treated myself on a private thermal bath and a massage.

Because the travel life is so damn hard.

Detoxed and Zen I caught up with JP again, who just came back from his private Peruvian adventure. This was my last destination in Peru, which meant I couldn’t escape my destiny any longer: I had to eat a guinea pig.* I ate grasshoppers, crocodile, snake, kangaroo, dog, lama, testicles and eyeballs before**, but for some reason the idea of chewing on this crawling rat-like creature didn’t seem inviting. They could at least have taken the toe nails off. So I stared into the nothingness while swallowing and tried not to think of what name I would have given him if he were my pet (Maximus, definitely Maximus).
​
* Please learn from my pre-vegan adventure. It wasn’t worth it. At all. So gross!
** Cruel? Terrible? Yes. But you’re only allowed to think that if you also don’t eat pig, cow, chicken or turkey. Because you’re not a hypocrite, right? At least I stopped doing it altogether. 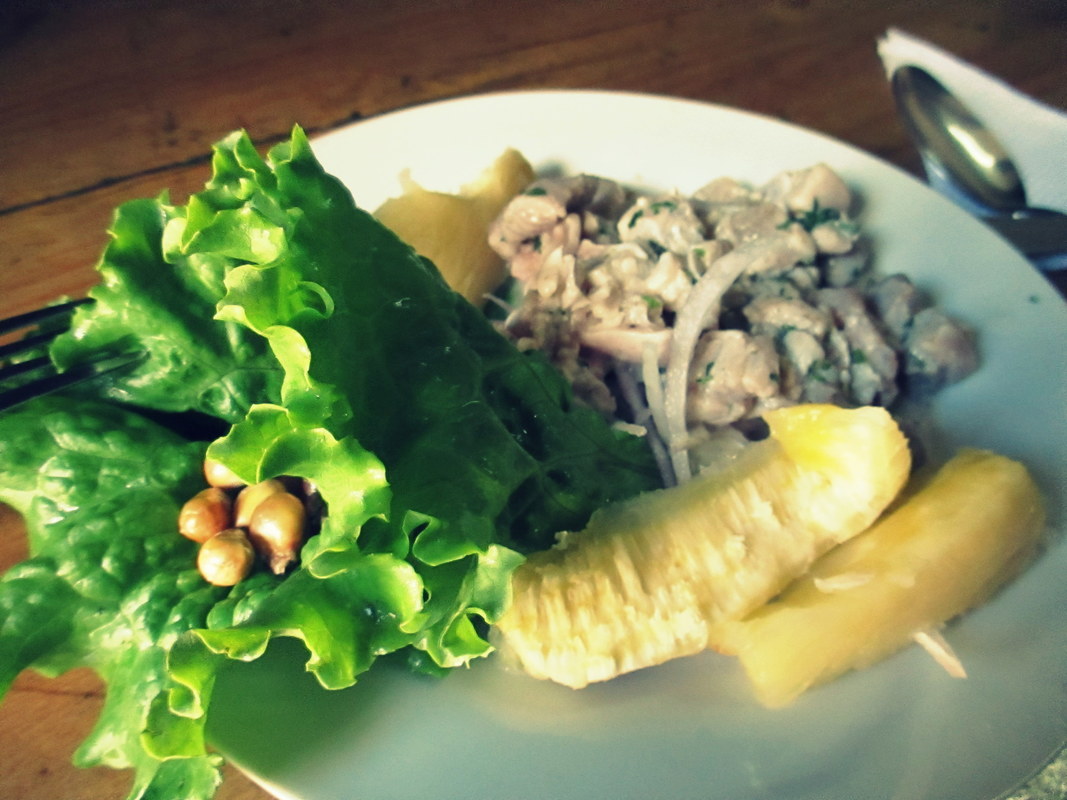 ​Maximus fortunately didn’t give me the shitters, so I woke up on time to take the bus to Cumbe Mayo, a few kilometres of Inca aqueduct which was the Trip Advisor favourite. 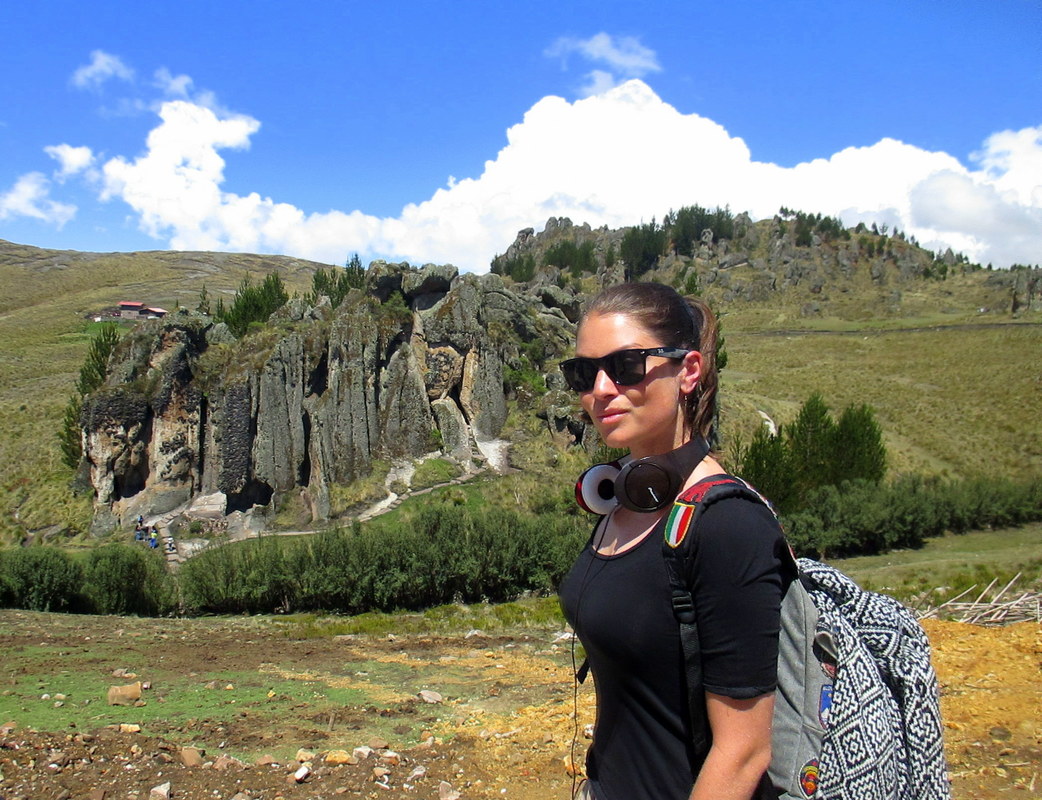 Although the advertised English-and French speaking guide could suddenly only remember Spanish, I was happy to find out that in the meantime I am advanced enough in this language to understand every single word of it if spoken in a moderate pace. He gave some interesting insights in these weirdly shaped rocks that reminded me of the Meteora monasteries in Greece which I visited, or the Cappadocia rocks in Turkey which are still high on my Budget Bucket List. If you travel long enough you start to compare all places. It’s hard to find something truly unique.

However, this place was impressive.
​The viaducts were alright, but it was the landscape that really blew me away. I hoped it also blew the troops of selfie-stick-tourists away, but that unfortunately did not happen. I was the only white thing walking around there though, which made me also a target for the photo albums of these Peruvian day-trippers. 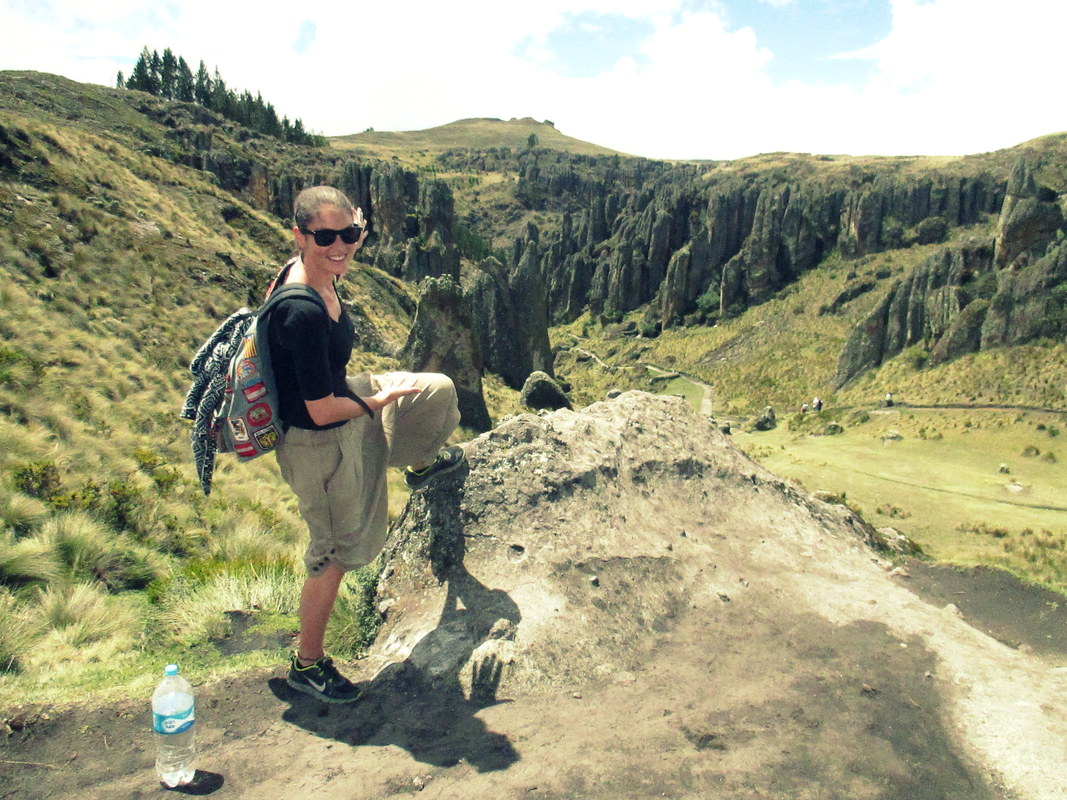 Quite the difference with the Ventanillas de Otuzco, where I went next by colectivo. There was no living soul out there, which might be related to the fact that it’s an archaeological burial site.

The fold-up corpses were crammed into these window-shaped holes in the rocks.

I paid the entrance fee, looked at it for 10 seconds, thought “yup, looks indeed exactly like the pictures” and turned around.
I jumped back into Cajamarcan rush hour and while seated on the rooftops of rusty buses I watched colourful crowds coming back from work, openly breast-feeding their babies and carrying bags with 25kg sugar or rice. Yes, this is well off the tourist trail. A truly unspoiled place where people still peek out of their windows to giggle and stare at that tall, pale-skinned lady out there.

​
In order to support the travelers’ community, I spend many hours per week to adequately document all information and advices for prospective visitors, accompanied by a (hopefully) entertaining insight into my personal observations and experiences. This service is and will remain free. However, if you voluntarily want to make a contribution and support my travels and thus the creation of new stories and information supply, here is the button you’re looking for:
Donate
Related:
- Where to next in Peru: Cusco, Machu Picchu, Huacachina, Huaraz, Lima, Arequipa or Puno?
- Ayahuasca in Peru: Valle Sagrado
- North of Cajamarca: The most dangerous border crossing in South America
- Hot springs in Banos, Ecuador
- On old viaduct in the forest: Ilha Grande, Brazil
​- Comparable little town: Suchitoto, El Salvador
- Inca heritage at Copacabana, Isla del Sol
- The MAAM Museum in Salta, Argentina and its Inca children
- The city of Maya ruins: San Ignacio, Belize
- City of Mayas: Tikal, Guatemala
- Visit the Maya Ruins in Copán, Honduras
- Maya and Aztec heritage in Mexico: Merida, Izamal, Tulum, Palenque, Oaxaca, Valladolid and Mexico City
​​- Diving into Malaysia's history: Melaka
​- Korean culture at its finest: Explore Gyeongju!
​- Natural hot pools and a volcanic alpine crossing: Taupo/Tongariro, New Zealand​
​​- The prettiest historical town in Romania: Sighisoara!
​- Serbia’s throughout history… in Nis