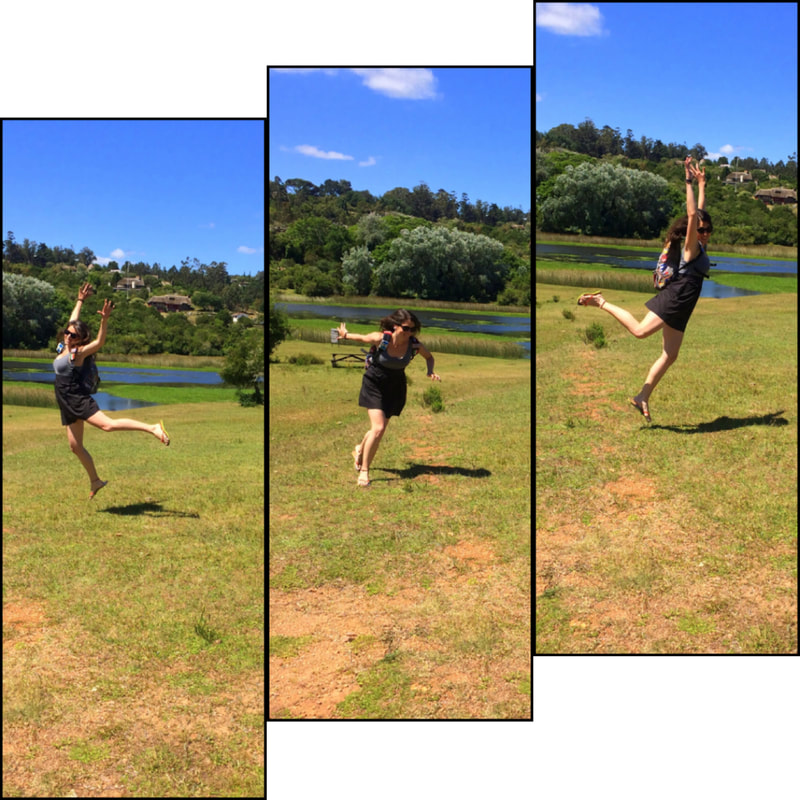 The familiar excitement shrieked through my body, butterflies flying from my stomach up to my head making me giggle with an anxiousness to explore.

The country that, opposed to its South American neighbours, neither has that thick density of overwhelming highlights and hotspots nor the arrogance to claim worldwide fame, but the undeniable charm of friendly (and good-looking) people, a laidback way of life and endless buena onda, good vibes. 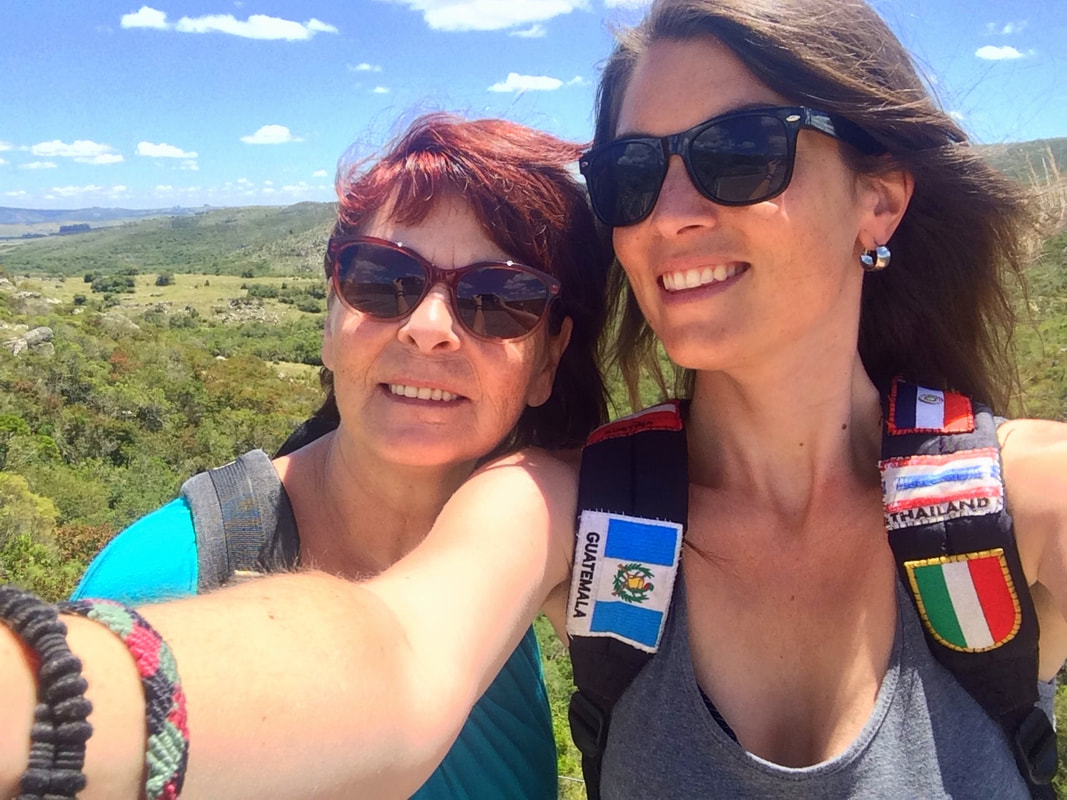 ​As I try to never visit the exact same places more than once (I mean, I have only one life to see as much as humanly possible of this world), I studied the map to track down a brand new destination circumventing obvious tourist traps like Punta del Este and Colonia del Sacramento. Minas in the Lavalleja department, could that perhaps be that diamond in the rough?
​
I didn’t have an immediate answer to that internal question, I pondered during my first steps on the streets of this small settlement. It’s not the most accelerating place, but it had the best accessibility and facilities in the region. For sure I was the first see-through white, blue-eyed thing around here and - judging from the surprised looks of its locals - not many foreigners, except for some lost Argentineans, made it out here. So well, that’s a good start. 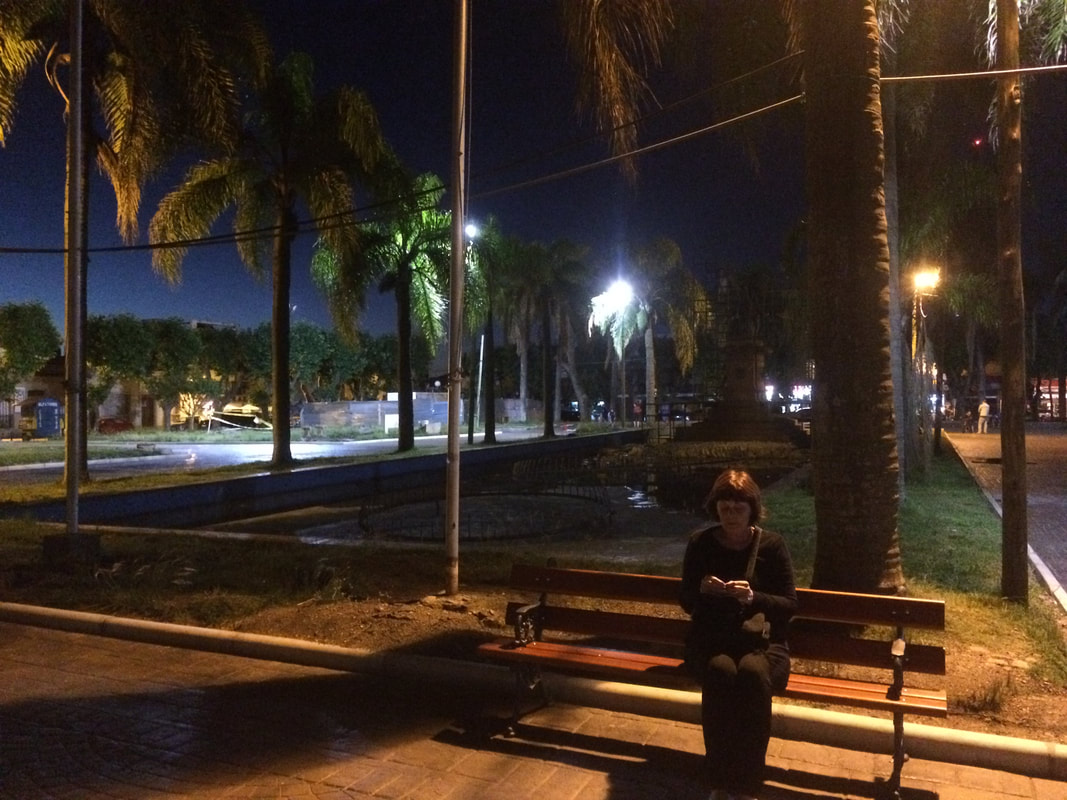 However, that meant touristic infrastructure might be slightly underdeveloped as well… which is usually no problem, I have my thumbs and a smile (=boobs) that make many cars stop to bring me anywhere my mind wanders to, but it’s a different story with a mother in her 60ies with an average nicotine-consumption of 1 smoke-session per 30 minutes for a solid non-interrupted 50 years in a row. Walking to a bus stop even makes here grasp for air, with the side note that a bus going to ‘touristic’ highlights is completely absent.
That’s right, they did make the effort to erect a very helpful tourist information desk for that one lost tourist every month, but there’s no way to actually go to these places. Unless you rent a car for 60 bucks a day + Uruguayan petrol prices, which was in this case the only option we had left.
​Nevertheless proud of her to make this stressful sacrifice in the name of exploration I guided the way to our first attraction, the waterfall Salto de Penitente. 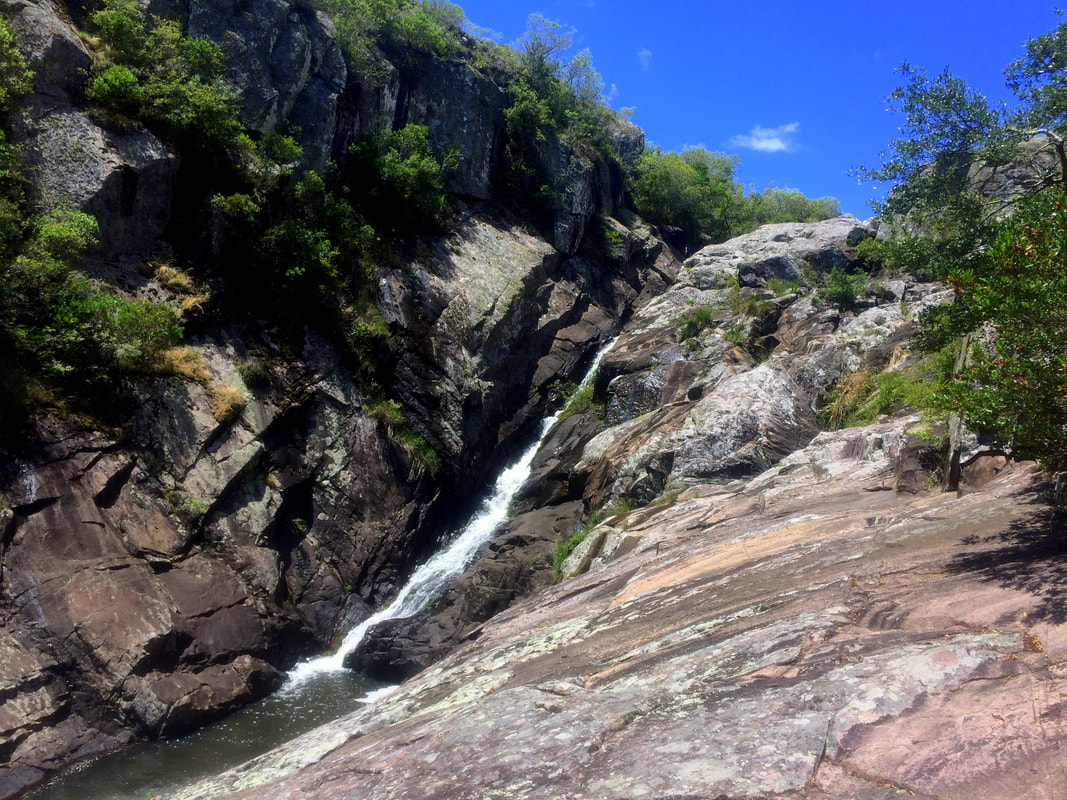 Now don’t expect to track down an equal match of the Niagara or Iguazú here, but it’s gratifying nonetheless. First of all, the wobbling road to get there is worth all the trouble. A serene green scenery of slanting hillsides and mind-boggling blue skies, with almost annoyingly perfectly shaped clouds you normally only see in paintings and screensavers, form the ultimate eyegasm. 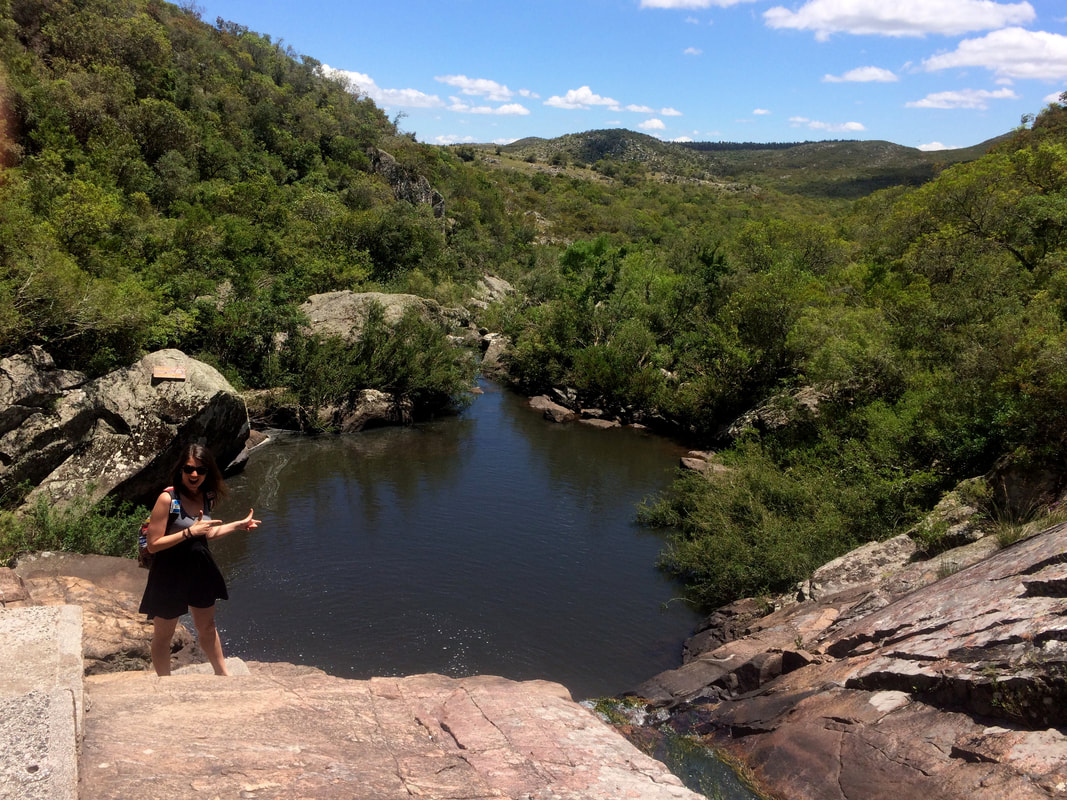 ​Mood-wise nothing can go wrong when subsequently sauntering in the heavily scenes of green gardens and cascades. While stirring my toes in the shimmering stream watching a mellow butterfly land on my wrist I almost felt ridiculous, like some bimbo playing the main part in one of those boner-killing videoclips of sugar-coated love songs.
To add a bit of terror to the fairytale: when we opted for a tiny ‘hike’ through the surrounding forests we got chased by an iguana. Don’t laugh. I Googled it, they do have teeth and people on the internet have been stitched up. My mother never saw one in her life, northern Europe doesn’t get more bad-ass than cats and dogs. While playing my role of seasoned traveller all unified with nature, reassuring my mom that my hundreds of encounters with a wide variety of iguana-species taught me they’re absolutely harmless, the bastard actually ran towards us with his beak wide open as to proof me wrong. I think I expanded my reach of decibels that very moment. Maybe I shouldn’t have emasculated him right in front of him, my bet. 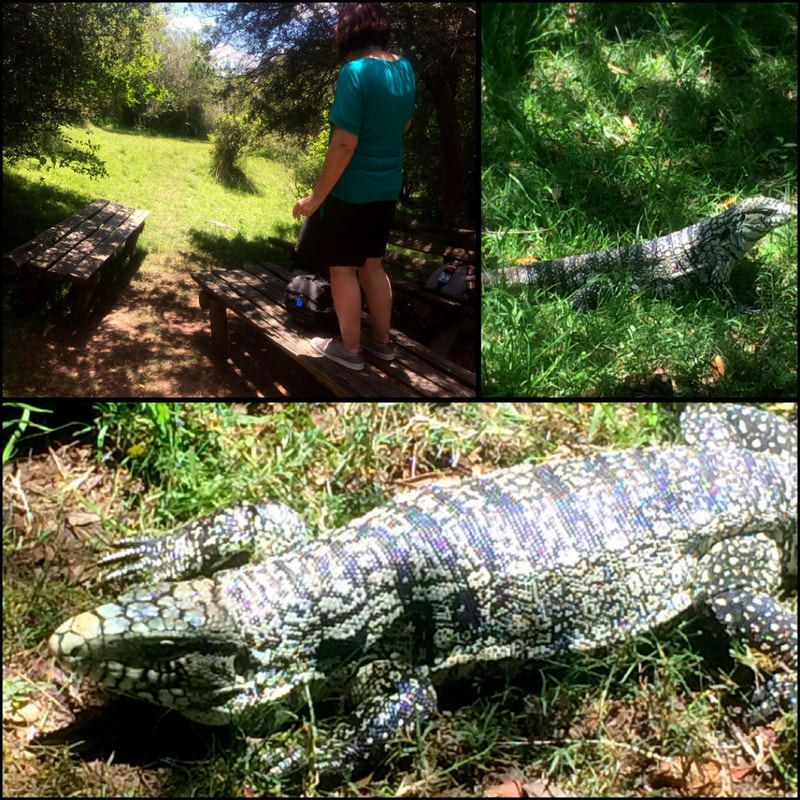 Once I convinced my mother to stop screaming and get off the picnic-table we continued our quest to Villa Serrana. To speak of a village is a bit exaggerated perhaps, I don’t think some self-built houses randomly scattered on the highlands qualify for that title. Which makes it even better, magic is generally better captured with a limited level of humanity. There’s absolutely nothing to do here, which is the main appeal. Eating an on the spot improvised lunch in between the fluorescent colours of nature, lit up by the blinding sun and cooled down again by the flood of the waters clattering down from a lake into a river formed by a man-built dam… you might not realize it right now, but that’s all you need sometimes.
Manoeuvring over the dirt roads furbished with little residences wherever people felt like putting them we finally reached Cerro Arequita… which was closed. In Uruguay you can apparently buy a mountain, put a fence around it and lock it for the weekend. Ok.
So we continued driving until we arrived at some balneario, a natural hang-out where happy locals spend their hours floating in the river, tossing frisbees around and drinking, toasting on whatever topic in their lives that tastes better with alcohol. A cheerful final chord of one of those moments you know you’ll start remembering like ‘a perfect day’ from then on.
Uruguay, what else you got? We just got the party started again, I don’t feel like going home* anytime soon now.

* wherever the hell that is
Maps & tourist info ​​
In order to support the travelers’ community, I spend many hours per week to adequately document all information and advices for prospective visitors, accompanied by a (hopefully) entertaining insight into my personal observations and experiences. This service is and will remain free. However, if you voluntarily want to make a contribution and support my travels and thus the creation of new stories and information supply, here is the button you’re looking for:
Donate
Related:
- Beach hangouts in Uruguay: Barra de Valizas, Cabo Polonio & Punta del Diablo
- More nature and hiking in Uruguay: Santa Teresa National Park
- Visit the colonial city of Colonia del Sacramento, Uruguay
- This can't be missed: Uruguay's wine region Carmelo!
​- Outdoors lover? Head down to Ecuador and don't miss Banos
​​- Lush, beautiful and with the bluest waters: Northland, New Zealand
​- Where time stood still: Stewart Island, New Zealand’s third main island
- Serbia at its greenest: hiking Pirot!