This is what I saw when I typed in El Salvador on Google to plan my little trip. I don't ask from you to understand me, but I still think it was a splendid idea to visit this country. Alone. If there's one thing I learned from travelling 43 countries (so far) is that facts are always overtaken by the day-to-day-reality. So if you wonder: no I wasn't scared, not from the enumeration of national disasters and violence in sensation-hungry media and not from the warnings from people who have never been in El Salvador who repeat the words of other people who have never been in El Salvador. I was excited, this was going to be awesome. 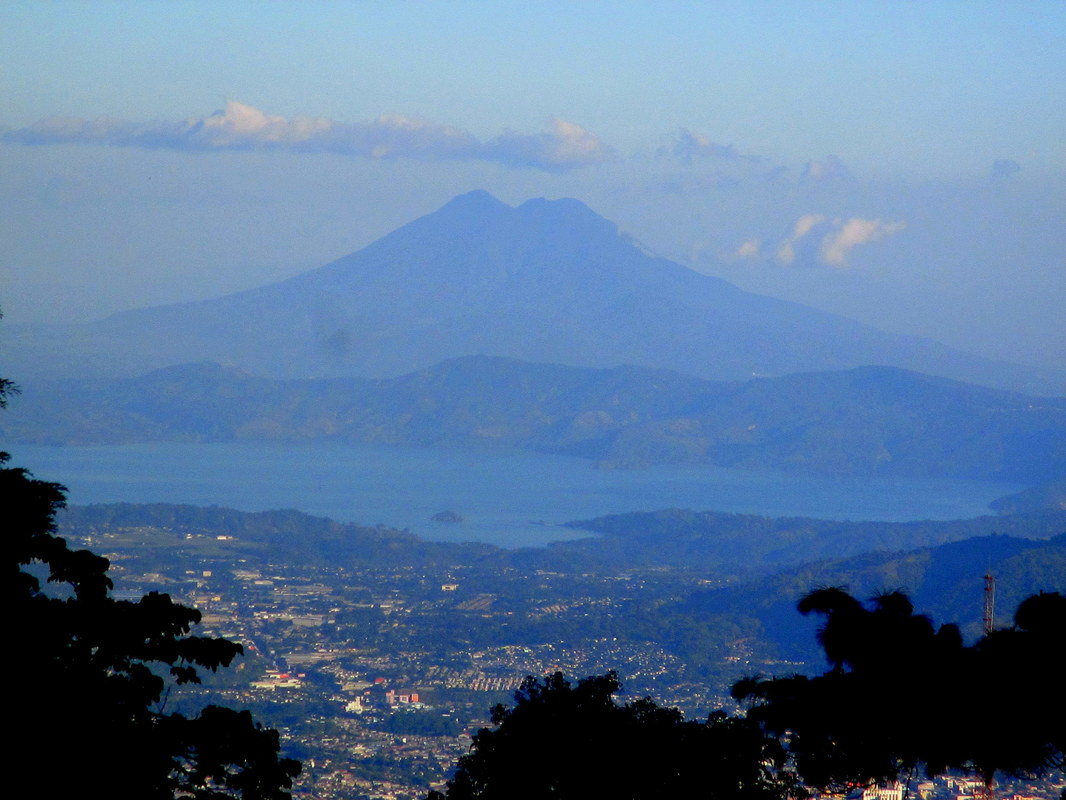 To not defy my luck too much I booked a shuttle from Guatemala to the El Zonte beach, instead of making my way down there by hitch-hiking as a woman travelling alone. The journey moved me. I could hardly grasp the sight of the natural beauty that was granted to my eyes. If this country is so cruel, why is it wrapped so gracefully? There must be a mistake.
​
Once in El Zonte I walked down the only street the village has in order to track down Olas Permanentes, a surf beach bar. Once I walked in I saw a guy with a worried face on the phone immediately screaming "Stephanie!". Apparently I was delayed a bit and Francisco, being a typical Salvadorian, worried for my well-being. He led me to his two friends, the Irish Onia (locally known as Cebolla, onion) and José. Drinks were served and the sea was flirting with me. What else can one wish after six hours in a sweaty minibus?
The name of the bar didn't lie, the waves were quite permanent: Obviously I'm always that idiot standing in the wrong part of the surf break, ending up as the play ball of the current. I had to pay it off with a big red wound marking my spine, disgustingly discharging pus for days. It couldn't spoil the fun and beauty of this place though. We went back to the bar where my bag with all my valuables wasn't stolen. In the Netherlands it would have been, in El Salvador not. Eat that.
​
Talking about eating, Francisco & co were more than excited to let me taste their national delicacy and pride: Pupusas. With a group of people that grew bigger at every street corner we marched down to a local lady cooking under a piece of cloth, serving the best ones in ‘town’. Together with some rice-sugar-cinnamon drink called horchata they easily slid down my throat, me as the pupusa-virgin being watched by all of them... "And, better than those in Honduras and Guate right?". I knew there was only one acceptable answer, which multiplied the merrymaking. 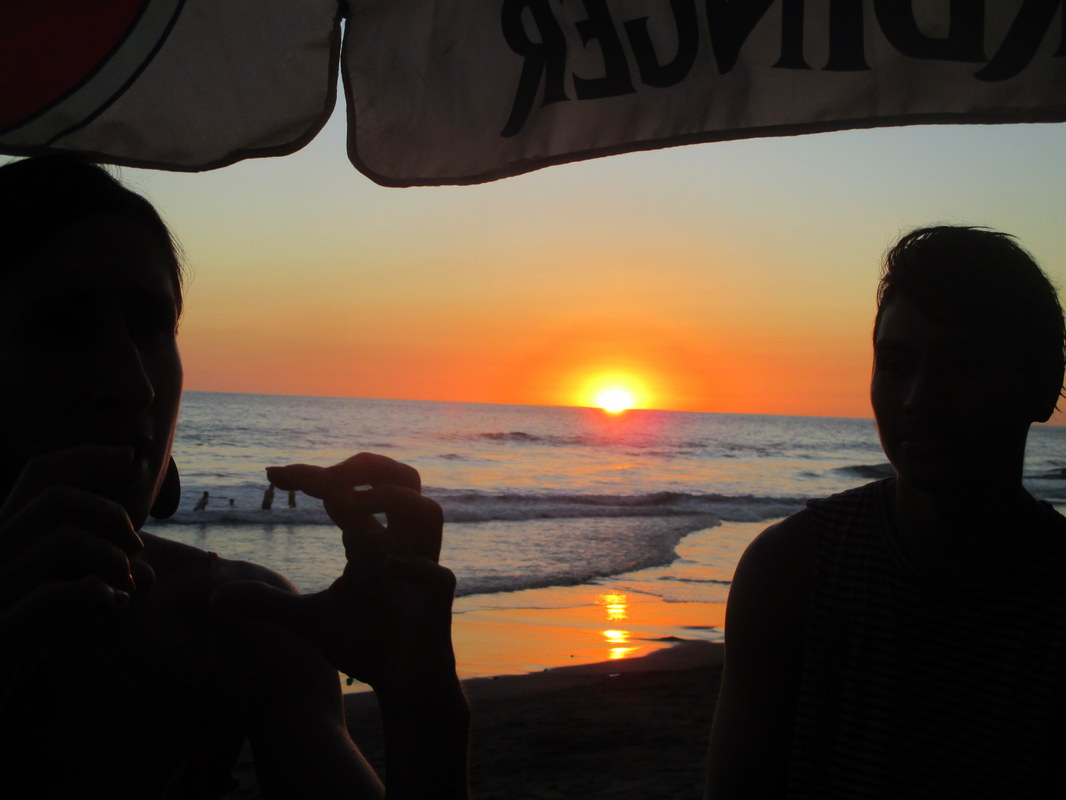 ​We drove down to San Salvador (at night: shocker). Surprised I took note how western and developed this place was: Chains as Burger King, Subway and Wendy's, big smooth highways, expensive 5* hotels and as major landmarks: A shitload of shopping malls. Kind of the same reversed culture shock I experienced when entering Colombia after months of third world countries. It felt nothing like that scary horror-hole full of gangs and murder the media created. We dropped of José in a colonia, a very common way of living here: A guarded community with houses that all look the same. I pushed my nose against the car-window and stared at streets that looked like Disneyland, or some decor of a cheesy Hollywood family blockbuster. I assumed this is where the American expats must have found their place of residence, but no: It's the locals, and not even the super rich. Wow. My confusion grew by the minute. Francisco didn't live in a colonia, but with his mum just outside the city centre. I really liked his house, somehow it made me feel like I was staying at my grandmother’s (and I would give anything in the world to bring back those times). I even had my own room! Until midnight Francisco entertained me with his love stories in the speediest Spanish slang I experienced so far, until I almost passed out of the exhaustion of that day. 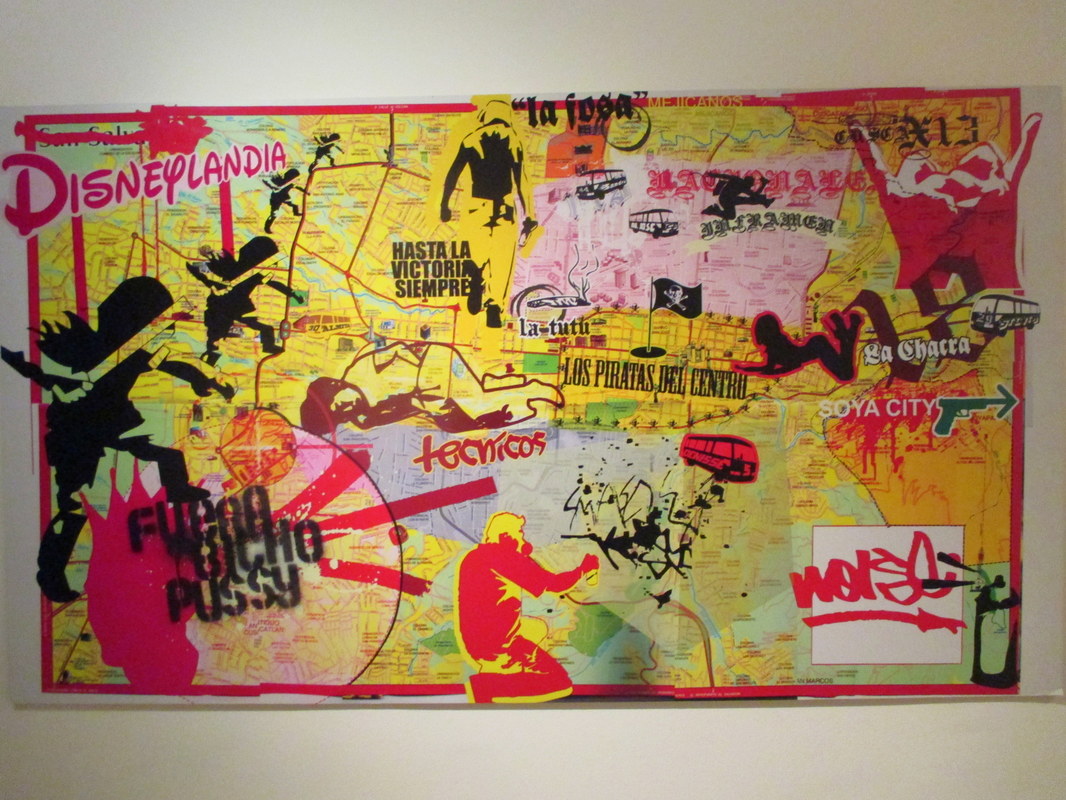 After the deepest sleep in weeks I woke up refreshed and in a bed full of sand. After an ice-cold wake-up-shower a motherly voice told me breakfast was ready: A toasted sandwich with beans and cream, absolutely delicious! It was Sunday so I had a guide at my disposal: Francisco was more than ready to show me his town. As museums are free on this day we drove down to Museo de Arte (MARTE). The parking lot was empty and there were hardly any visitors... what says more about the cultural engagement of the local population than the museum itself. This place was excellent.
Not only did the building leave a long-lasting impact, the work exposed in the neatly organized gallery didn't fail to impress me. It's hard to find museums of this caliber in Central America.
​
Subsequently we joined the traffic jam to Mercadito Merliot to spoil ourselves with an amazing local lunch (together with the entire San Salvadorian population so it seemed). 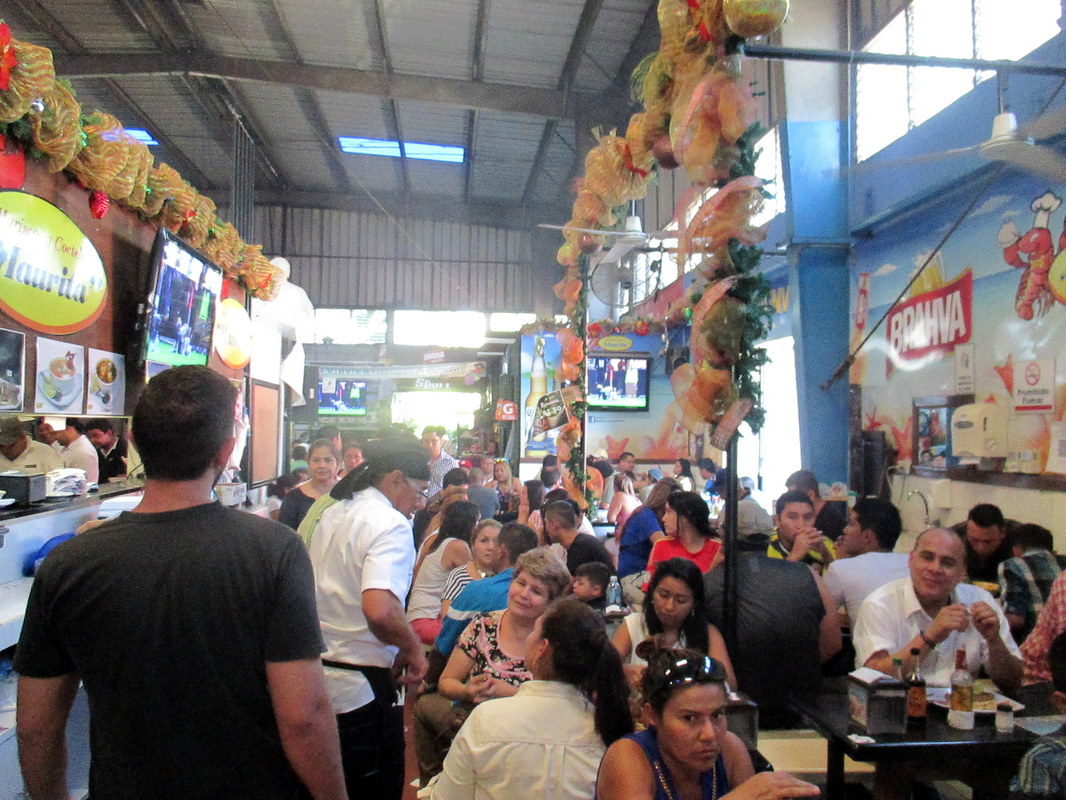 ​To maximize freebie day we then went to Museo Nacional de Antropologia, but unfortunately it was still closed because of the Christmas holidays. The alternative was excellent though: El Boquerón National Park providing views on the crater of Volcán San Salvador. The park is the smallest I’ve ever seen, but the entrance is only $2 ($1 for locals) and the views are fantastic. You didn't hear it from me, but: If you walk passed the parking lot next to the entrance you can easily walk in for free via the exit, no one checks it. Sshhht.
​The next day Francisco started his new job, but I found myself a replacement: Via Couchsurfing a guy called Eduardo had offered his time, knowledge and transport to show me around... an offer I gladly accepted. Being a fellow coffee addict he made sure our caffeine intake was adequate, which is easy considering the amount of terrific coffee bars in San Salvador (with GOOD coffee, hallelujah). As the museums are closed on Monday he drove me down to his hometown Santa Tecla for a lunch of jalapeño pupusas and empanadas made of plantains and beans. Some minister decided some time ago that Santa Tecla should have been made more attractive with happy colors, nice shops and bicycle lanes. What can I say, he succeeded gloriously in that. Even though I was the only foreigner in the streets being stared at continuously, this place has tourist trap potential: beautiful, safe and comfortable, what else do you want?
To illustrate the country's dark history Eduardo drove me down to Parque Cuscatlán to demonstrate the civil war memorial, containing all the 3000+ thousands of names of the people being murdered by the government (in reality more than 75,000 people ‘disappeared’). Some depressing historical trait every Latin American country seems to have in common…

In El Salvador a civil war between the military-led government and the Farabundo Martí National Liberation Front (FMLN; guerillas) tormented the country for almost 12 years.

This war was an episode of extreme violence on both sides, including deliberately terrorizing and targeting civilians by death squads, the recruitment of child soldiers and severe violations of human rights. 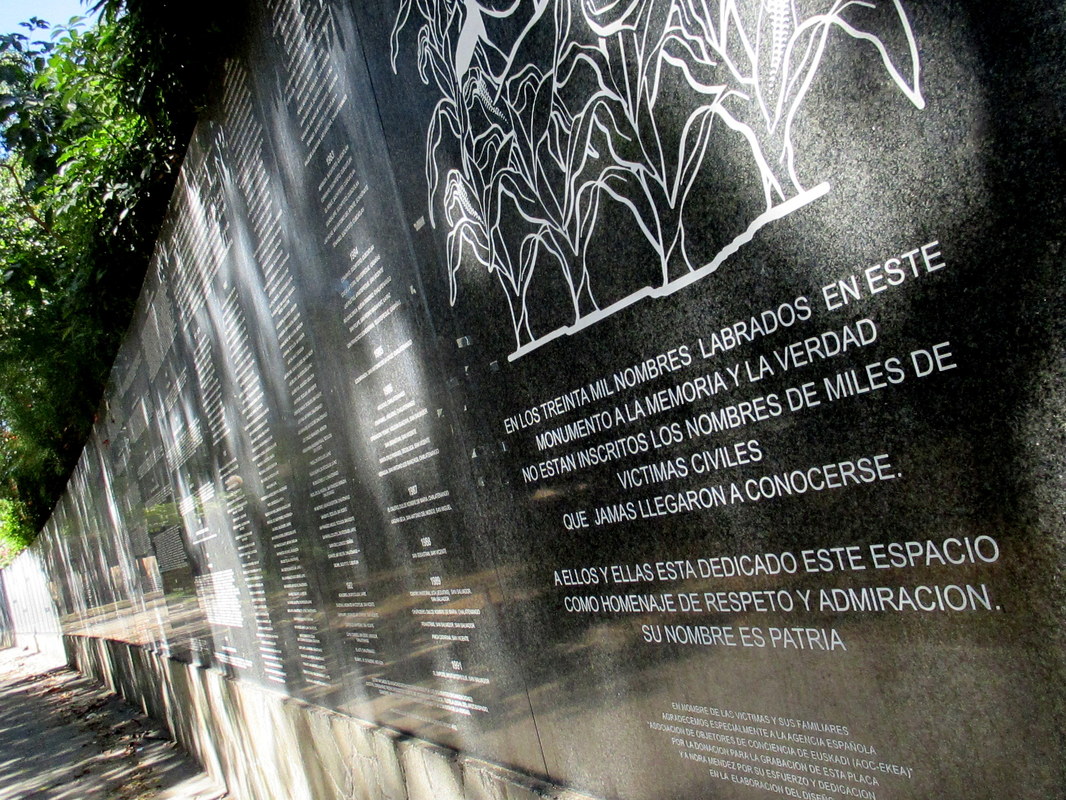 ​** Quick another-reason-why-the-US-is-hypocritical-fun-fact: The violent right-winged government including its death squads has been backed by the US during the entire civil war. BUT, in 2002, the US court publicly held 2 retired, US-based Salvadoran army generals responsible for the civil war atrocities, ordering them to compensate victims who brought case. It kind of reminds me of the bullies in primary school, beating you up in afterschool hours but pointing at somebody else when the teacher asked what happened.


Right now the civil war has finally ended, but safety is still an issue in El Salvador. Unlike other surrounding countries it has not so much to do with narcotrafficking, Eduardo guaranteed: It's the gangs agonizing the innocent. Their operation methods have a lot in common with the Italian mafia: Extortion of shop owners, forcing them to pay with either their money or their lives. In a country where wages are low and unemployment is an issue, many boys can't resist the promise of cash, housing, drinks and women gangs offer. Once they get involved there's no way back. To proof that they can murder they have to assassinate a random person… and if they don't want to cooperate, they made another prospect gang members' murder a bit easier: They're the one to be killed, they know too much. A sad reality.
Another heavy subject was discussed when joining yet another traffic jam: The weight of the national population. Eduardo smiled: "the tortilla-effect", he said while pointing at some female giants working at the central market. Well, besides the carb overload, I guess the deep-fried chicken with coca cola for breakfast and lunch might play a crucial role. Food here is either full of fat, carbs or an unrealistic amount of sugar, what might explain why the vegetables are so cheap: I see hardly anyone eating them.
​
After challenging the San Salvadorian traffic for yet another hour we found out the Iglesia Rosario was closed as well, as was the Teatro Nacional. Good, more nature then? Nature's never closed. One of the highlights of San Salvador is the Puerta del Diablo, both figuratively and literally. At the place where the devil once created a gate to escape the angry father of the girl he was in love with, now one candid magnificent look-out is there for our entertainment.
​It's possible to see the entire city, the lake, the Pacific Ocean and all its natural surroundings from this place that is quite gorgeous in itself as well. Later I learned about the bloody history of this spot: This used to be the place where FMLN members were executed and tossed over the edge (sometimes before they actually died). Quite illustrative for the country: Cruelty and beauty goes hand in hand.
​I had one day left in the capital, on which I decided to walk down to the anthropological museum at last, a 40-minute walk. However, whoever saw me passing by and had the guts to talk to a stranger like me warned me instantly. Whatever street I wanted to go, it seemed to be infested with thieves, according to the locals. After an hour I gave up and decided to reach out to Eduardo again, who picked me up shortly after. Was the museum worth all the hassle + $3 ($1 for locals)? Nah, not really. It was more like a book about Salvadorian history and migration smeared out over a lot of displays. I mean, I like to read, so it was fine... But the text-artifacts-ratio was kind of disturbed. There were some carved stones hieroglyphics and mummies that were cool though, so don't let me stop you. We drove down to Santa Tecla again for some local yuca and enchiladas, and that was it: My time in San Salvador was done.
I had my shot of art, my slice of modernity and city stress and met a handful of swell people. I was more than satisfied.