Volcán Mombacho and Laguna Apoyo are located at a short distance from Granada. A stay in this city is recommendable if you intend to stay a few days: 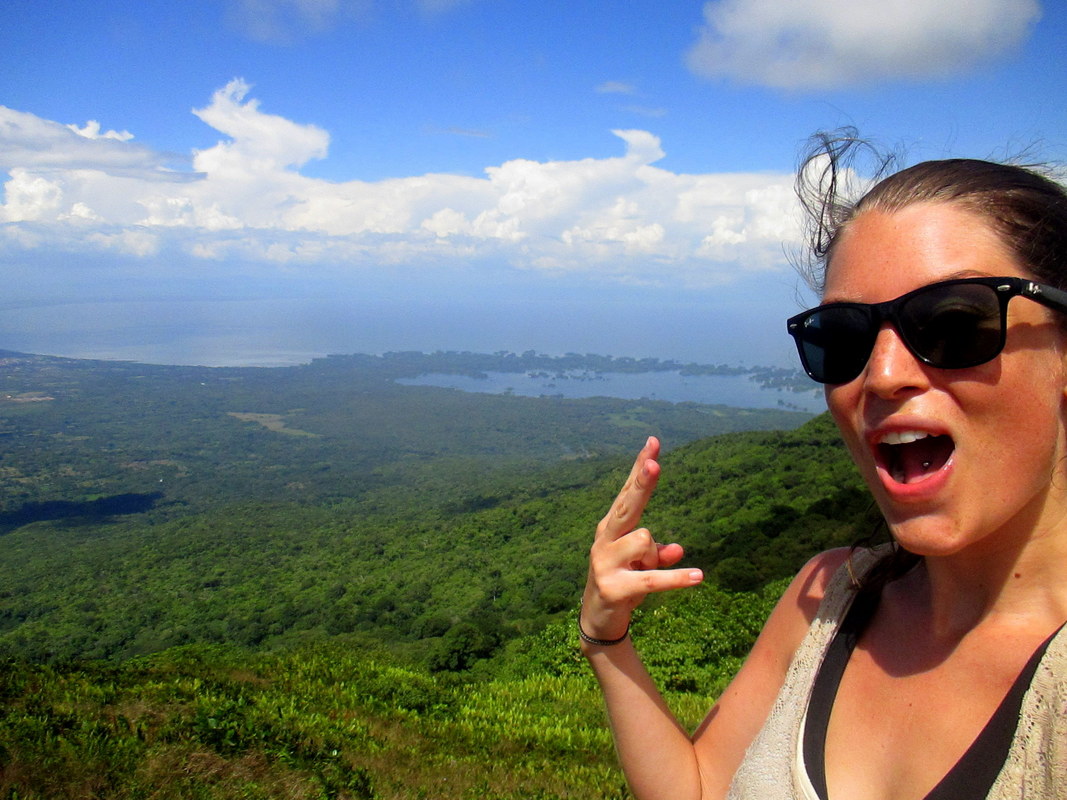 ​You're lucky to have clicked on this specific blog because what I'm about to describe are one of the main highlights of Nicaragua. At the moment of writing I saw Rivas, San Juan del Sur, Managua, Granada, León, Masaya, Isla de Ometepe, Playa Gigante, Matagalpa, San Sebastián and Somoto, and except of San Juan it was one big series of euphoric moments… but for me Volcán Mombacho topped it off. Literally, as from the top of this inactive volcano you can look all the way over basically the entire province. 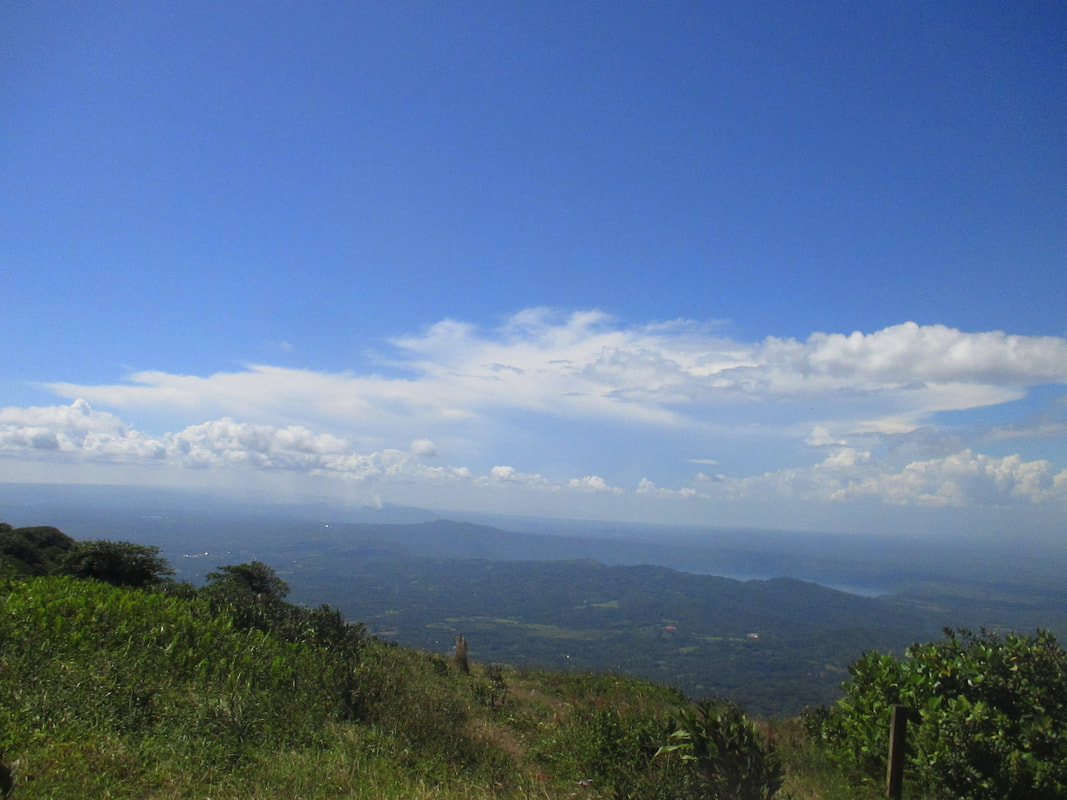 ​Now I must emphasize upfront that I’m not easily impressed by volcanoes. I simply have the luxury to have seen too many. Indonesia, Italy and entire South and Central America are loaded with these openings to hell, so I had plenty of opportunity to climb, drive and stroll along some craters. Therefore, when I entered the chickenbus from Granada in the direction of Rivas, seated on the engine and five t-shirts of willing and helpful young men that had decided to continue the trip half naked in order to safe my burning ass (the only seat left was right on top of the engine), I had set my expectations quite low. Once a tuktuk dropped me off at the park entrance (a distance I could have easily walked I know now – and you do too), I got the shock of the day: The entrance prices were not only tripled for foreigners ($5), the bus to the summit cost a scandalous $15. That’s a lot in Central America, if you wondered. 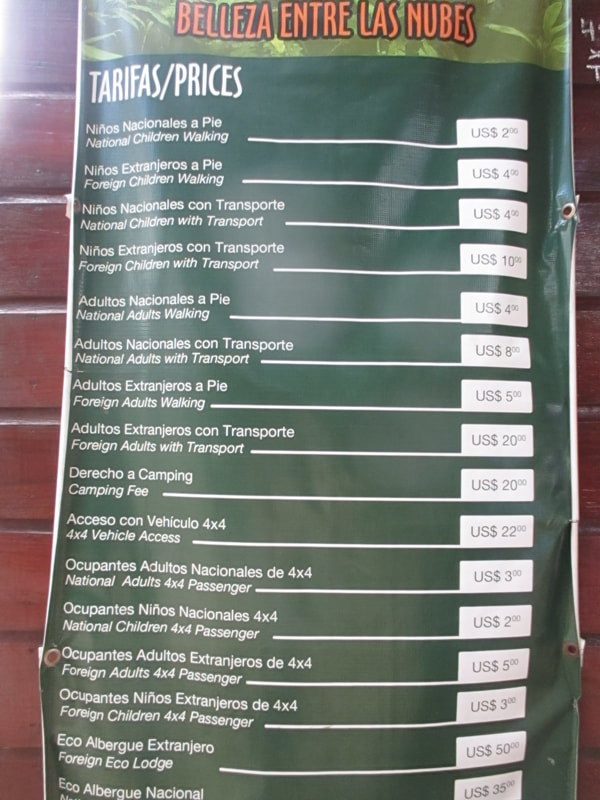 These are the 2015 rates. They have very likely gone up by the time you read this.​
​
​Okay, so I guess I’m gonna be sporty today: walk the 5,5 KM steeper than steep road up. My fat hotel owner as well as some park rangers had told me this would be too difficult for anyone who’s not an athlete, so that was only an extra trigger to proof them wrong. So I soaked my scarf in ice cold water and like some drenched Arafat started my journey. 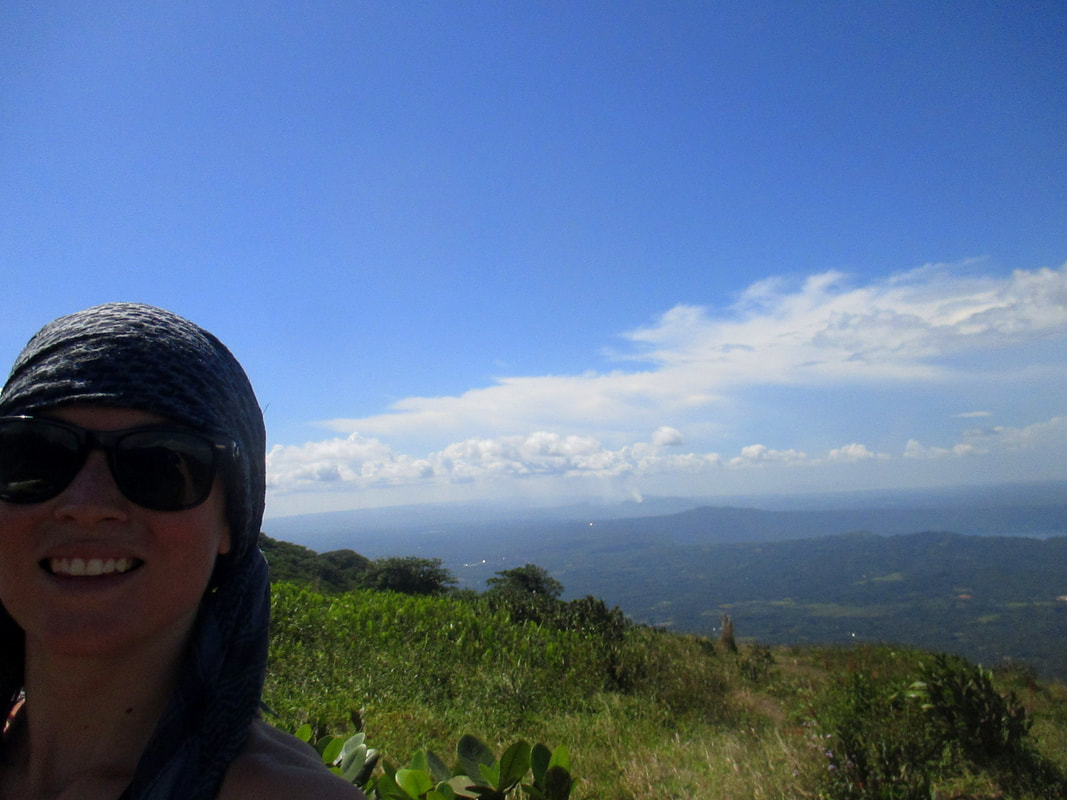 After 5 minutes of walking (CLIMBING) I knew I had made the right decision: The by now familiar sound of howler monkeys welcomed me to the jungle…

I looked up and saw 1… 2… 5… 10… holy shit, at least 30 monkeys swinging from tree to tree and staring down at me, their kooky clothed species member.

I heard the $15-bus passing by and chuckled at the idea that they just missed that. On the way up, correct me, on the “undoable exhausting I-can’t-drink-faster-than-I-sweat torture machine of a road” up, I saw two other monkey tribes. Yes, you might read that again: Three monkey tribes passed my vision that day. Don’t worry, it’s normal what you’re feeling, jealousy is a natural phenomena.
Lying on my back on the road staring up two things crossed my mind: 1) I hope they don’t poop all over me, and 2) What would Steve Irwin do? A brain cell remembering the sight of my Aussie kaki-pants hero hanging in the bushes while exclaiming “Crickey, they accept me as family now”  came to mind, and I knew what I had to do. Five minutes later also Stephanie van Hoeijen was hanging on some branches, uttering some hopefully similar shouts. Even though I was glad this didn’t end up at YouTube, Stevie was right: The curious monkeyboys slowly moved my way, checking out what the heck was wrong with that odd-looking creature. Crickey to that.


Once up (that made it sound easy, but believe me: it was not), I had the option: the easy crater trail or the more difficult puma trail which I had to do with a guide. I stroked my burning bum and decided I deserved the easy one. Of course I managed to get lost on the well-marked trail, which was a blessing. If not I would have missed the look-out, the holy mother of look-outs. I think I screamed out the entire bible while following the path to this platform. And I’m an atheist, for what it’s worth. I looked to the right and saw the crater covered in bright green vegetation. Right behind that I saw the isletas, the big tourist attraction where I had zigzagged through some days before. Legend has it these 360+ islands were formed when the volcano I was standing on stirred up some pieces. 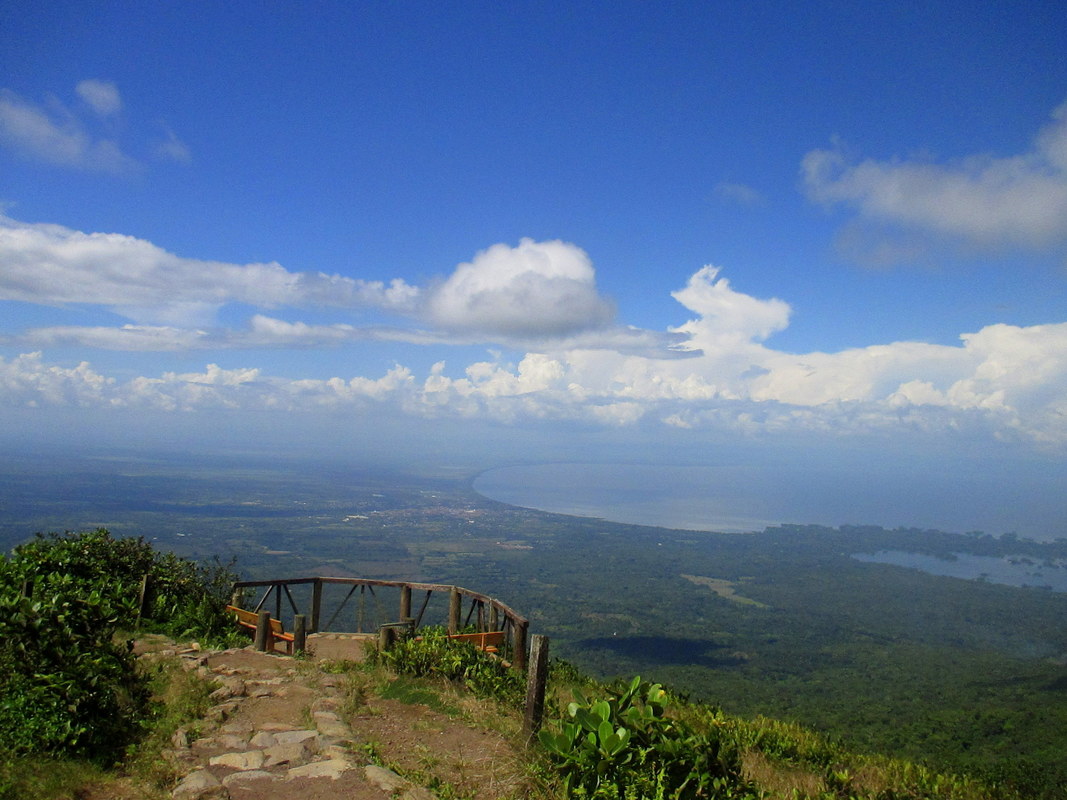 In front of me I saw Granada contrasting with the Cocibalca Lake, Central America’s biggest. I saw some clear blue in between the hills and realized I was staring at Laguna Apoyo. Then I turned my head left and saw the Masaya/Nindiri volcano I climbed a week earlier spitting out its thick fumes.

I was so overwhelmed I didn’t know where to go with my emotions. It was one of those moments where you can’t suppress the urge to loudly imitate a cock sound: “Kukelekukelekuuuuuuuuhhhhhhh!!!!”.
Okay. This would have been a beautiful end for this blog, don’t you think? I’m not done though. I mentioned TWO highlights, remember? And I mentioned some ‘clear blue in between the hills’ which was Laguna Apoyo, remember that too? Great, that’s what I meant.

During my time volunteering in Granada I only saw astonished backpackers coming back from this daytrip, so I decided this was on the list for when my mom would visit me in Nicaragua. I was so convinced of its beauty I opted for a two or maybe even a three-day-stay, but my timing was wrong: Right on Independence Day when all the Nica’s have a long work-free weekend. Yeah, everything was sold out. We decided to go to (the apparently less popular) Isla de Ometepe and visit the Laguna at a later point in time. On a daytrip, just like everyone else. 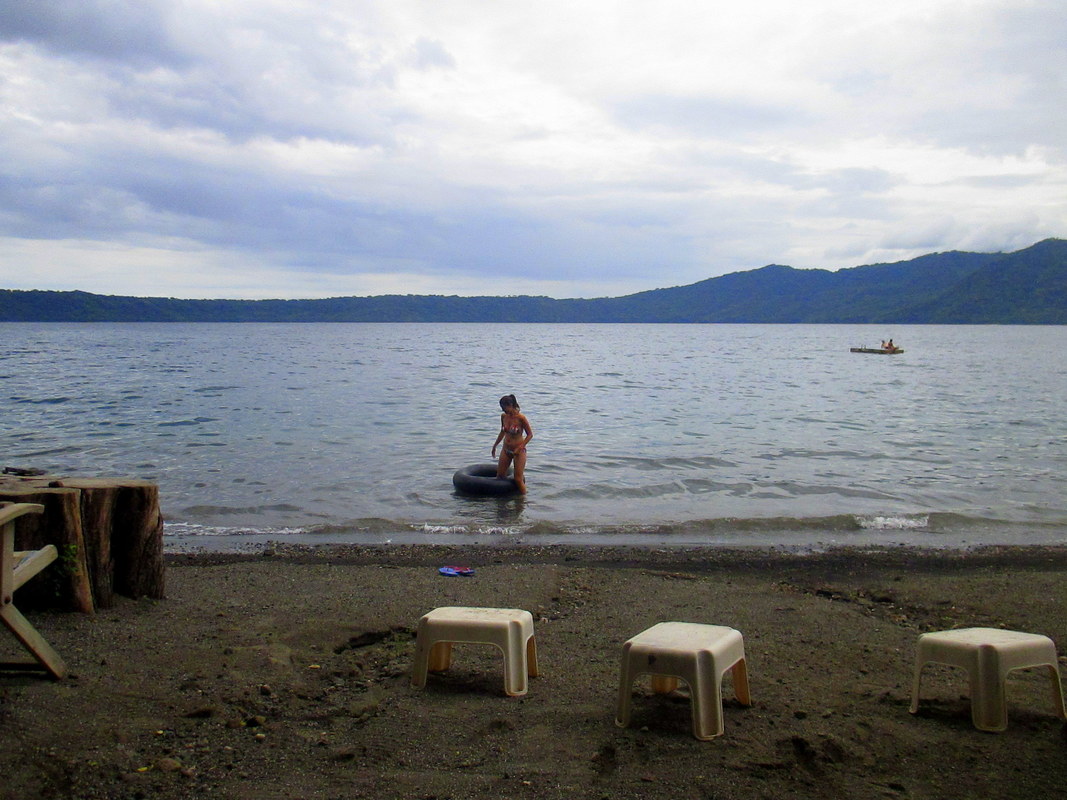 An overloaded van dropped my mom, me and 13 other people that didn’t fit in the vehicle at the Paraíso hostel. At this, I must say, amazing spot we had some designated fun time at the private ‘beachfront’ equipped with entertaining toys like tubes, kayaks, stand-up paddle boards, ping-pong, pool, petanque and everything else that floats or rolls. The water temperature is so warm and relaxing you could pee in it instantly (I said COULD). I settled quickly with an afternoon in the tube, peddling to almost the middle of the lake to treat myself on some nice panoramas. Okay… Now I do need a proper closing sentence for this blog and nothing comes to mind.