Download File
Rio Dulce is nice, they said. So I went.

I hitchhiked in a truck from Honduras, crossed the border and took three different buses. After seven hours of travelling and hardly any sleep I faced a new challenge: finding Couchsurfer Jack* who didn't have a couch for me, but a hammock on a boat. 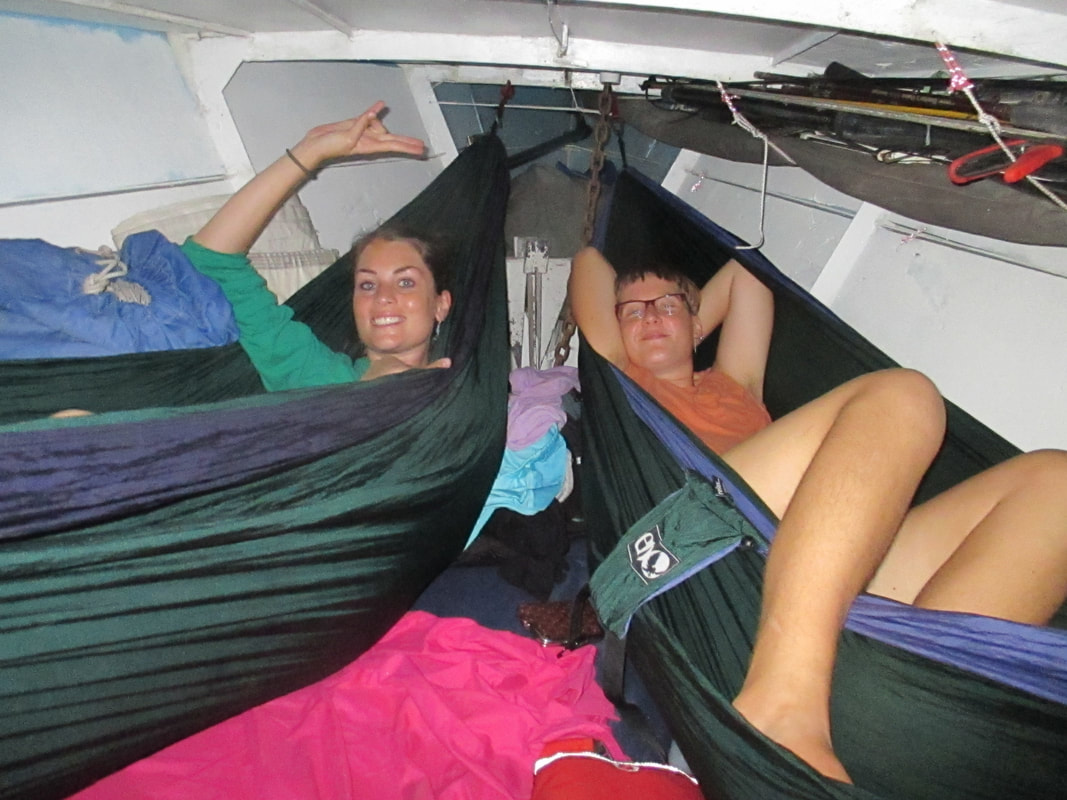 I crossed a bridge to get to the harbour where he was anchored… Adjust your image of 'bridge' here: It's not that small, rattling, wooden structure you usually find in Central America. The USA mingled into local business (Really? They never do that!) and built some kind of giant monster of 2km long. I had to cross it twice with aaaaaaall my luggage, as the extreme rainfall completely flooded everything blessed with an idyllic waterfront location and blocked all access... and after my last flooding debacle in Copán I didn't feel like swimming to the boat with my two backpacks on.
​
So I went back to town and walked into the young and popular Sundog Café to see if Jack was maybe hanging out there. He was. I just didn't know it was him and he didn't know it was me, so I left again to find Wi-Fi and get some cash out (a real quest, they don't accept maestro here). After an hour Jack messaged me to come back to Sundog, which I did... when he just left. Some older couple overheard me inquiring about him though and said they were his boat neighbours. Imagine loud, boasting but fun-loving stereotype Americans, complete with countryside accent, a stubborn view on politics and no interest in local culture and values whatsoever, and there you go: a pretty accurate idea of who I met. They were nice though, and very entertaining. I joined them for dinner and drinks and came along on some shopping (cocaine-shopping, I learned later). They gave me a ride on their little motorboat and dropped me off at Jack's… at last. Another Couchsurfer Hanna from Estonia joined us and together we started what was going to be an interesting experience, to say the least. 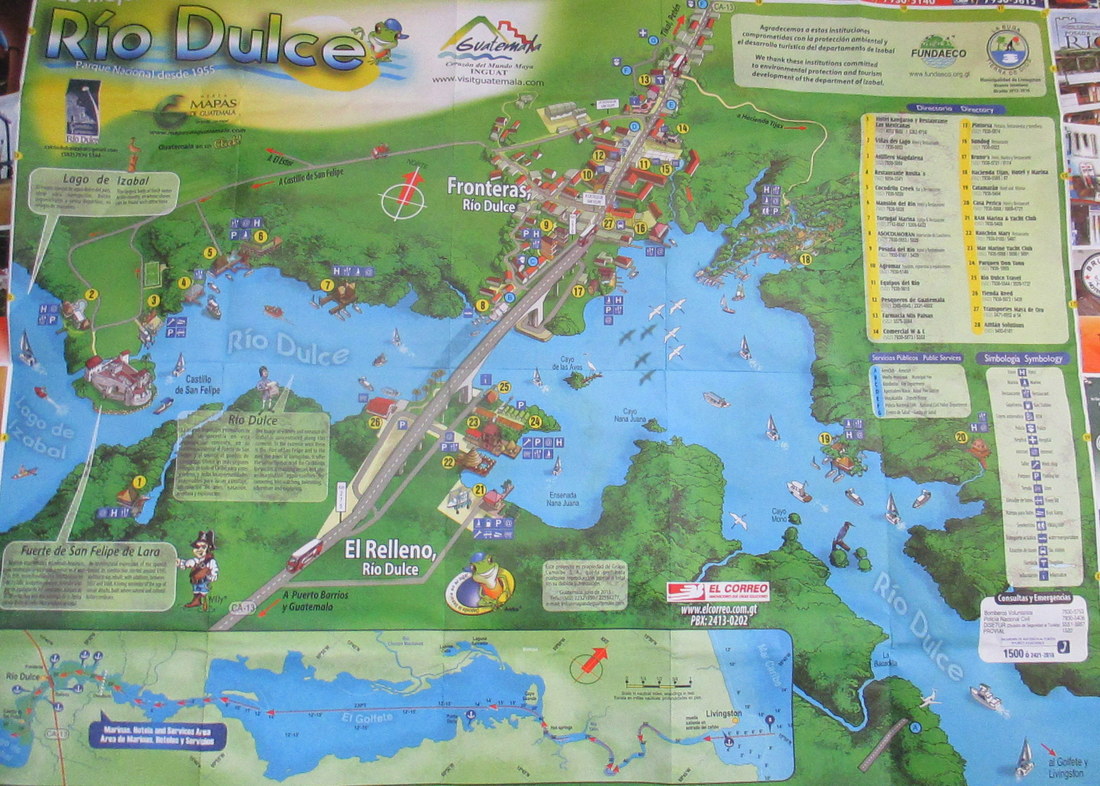 ​We couldn't stop talking. These people had so much to tell and even if we were out of stories, our mouths kept on moving. Especially with Hanna I felt I wanted to hear all of them. She's my age and is still exploring many unknown secrets and curiosities of this world she’s now examining, but her mindset will open many doors for her. She's vegan, bisexual, doesn't drink, has never shaved herself except of her head and is this wonderful human-being I strongly admire. Besides that, I enjoyed her being there as I was still on a boat with an older man that has been single for a while. And who offered me cocaine in the morning (caffeine is enough to wake me up though). No biggie, I've been travelling in Latin America for 15 months now and didn't see one single party without people around me snorting up the lines they just neatly organized with their credit cards, so the sight of that doesn't really shock anymore. He's also not the first Couchsurfer offering it, it's apparently the white motor of many local economies here. The world’s chemical romance with Mr. Charlie. 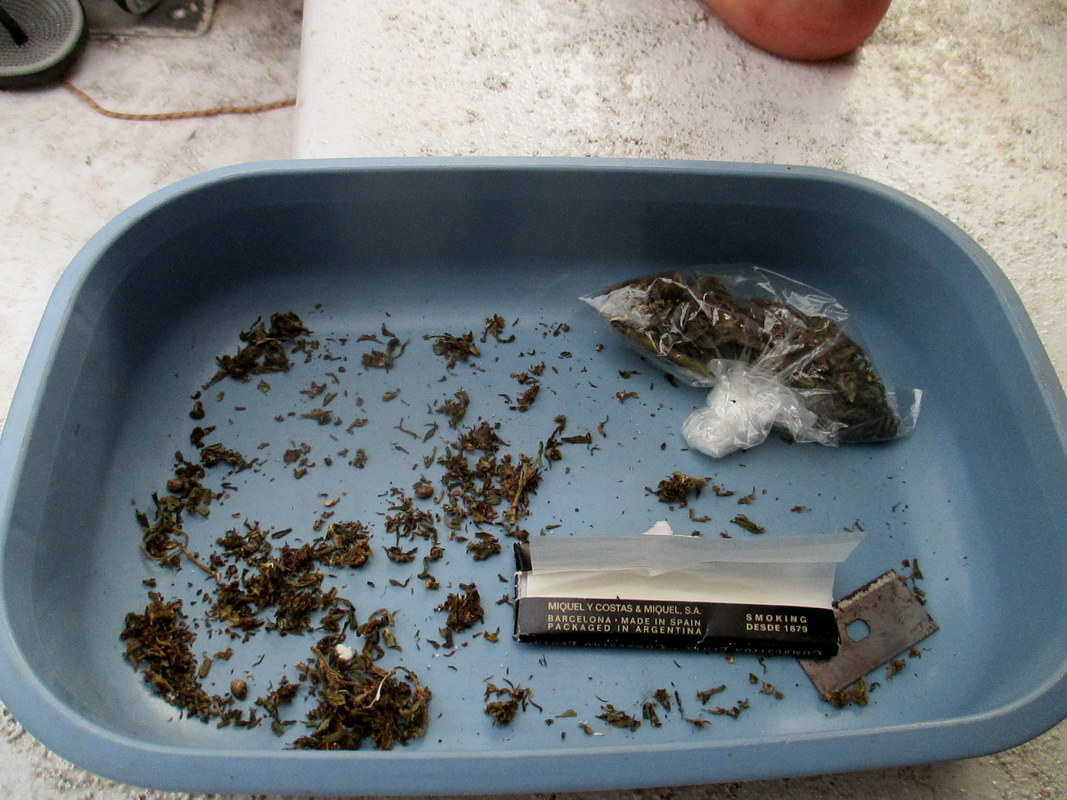 ​We were off to the Sundog again, lunch and drinks are filling up the days in Rio Dulce as there’s not much else to do. Which is a delightful state of affairs. Jack and Hanna started walking, but I already laid my eyes on that sweet little kayak dangling off the boat. I was going to ride that baby. The current was surprisingly strong, but wow, how can you enjoy Rio Dulce more than paddling right into it?
Once at the bar I decided to chat with the friendly white-headed old man. We had such a good time, he even invited us over for wine and snacks. So nice. So not nice. Jack explained this invite was only directed to me, not to us as a group. And his last female Couchsurfers that accepted this same invite got flashed: The friendly old man took his pants off right in front of them. Jesus Christ.

​Hmmm ok, not going there, right? Right. But we ran out of petroleum and couldn't cook. We were hungry. Guess who was the only one who could help us? Uhuh. Jack's idea, not mine. I just avoided eye contact and dropped the word 'boyfriend' every two minutes. Good strategy: We cooked, scored some delicious imported shiraz and a fancy cheese platter, all without any sausage-show to endure. Guess what else we got treated on? Indeed. Cocaine.

Grandpa even had a  special coke-cutting-toolbox to facilitate the process. Interesting pension plan. 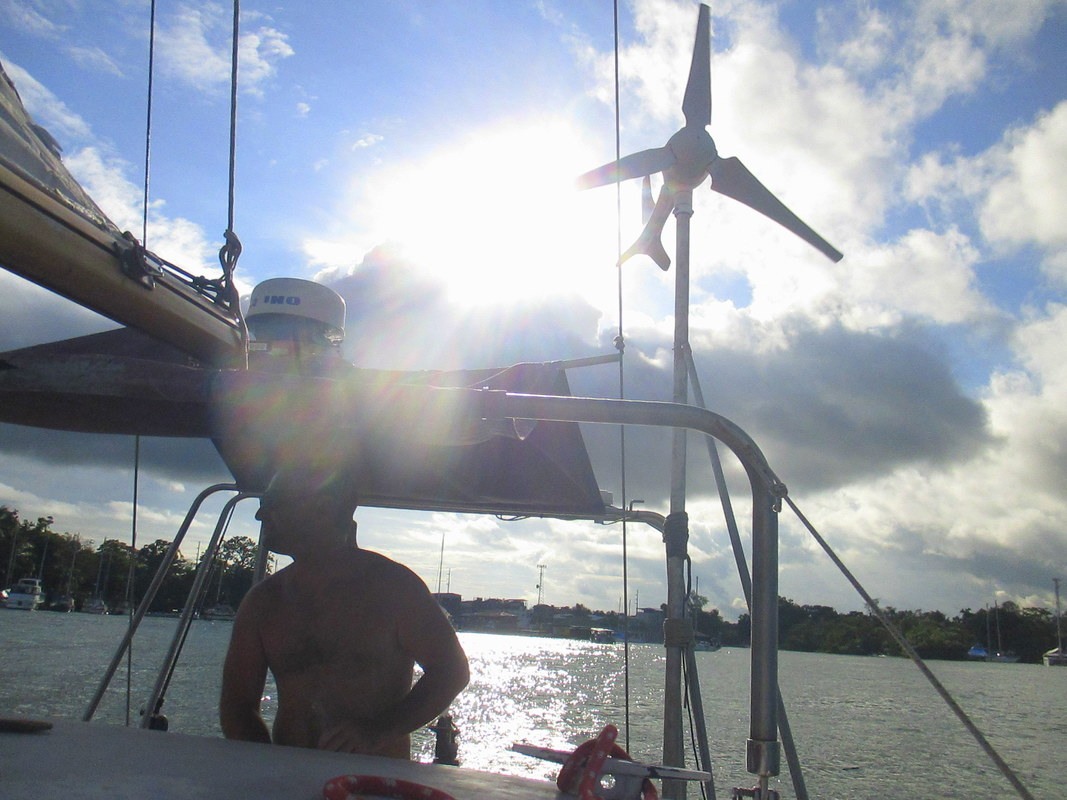 Having consumed nothing to disturb my night rest I was rocked to sleep by the waves to wake up to festival day. The Garifuna tribes apparently organized some music event in Livingston and Hanna was determined to go. After changing his mind every ten minutes Jack in the end decided to sail down there with his boat. Awesome: I don't have to pay the $20 boat fare and accommodation that's probably sky-rocketing high at festival time, so let's give it a go.
​
As it was already late we sailed half-way and anchored somewhere mid-water after the sun had already set. I sat down, let the silence scream at me for a while and suddenly looked up to find the sky scattered with a million stars. The reward of doing what not many people dare to do. 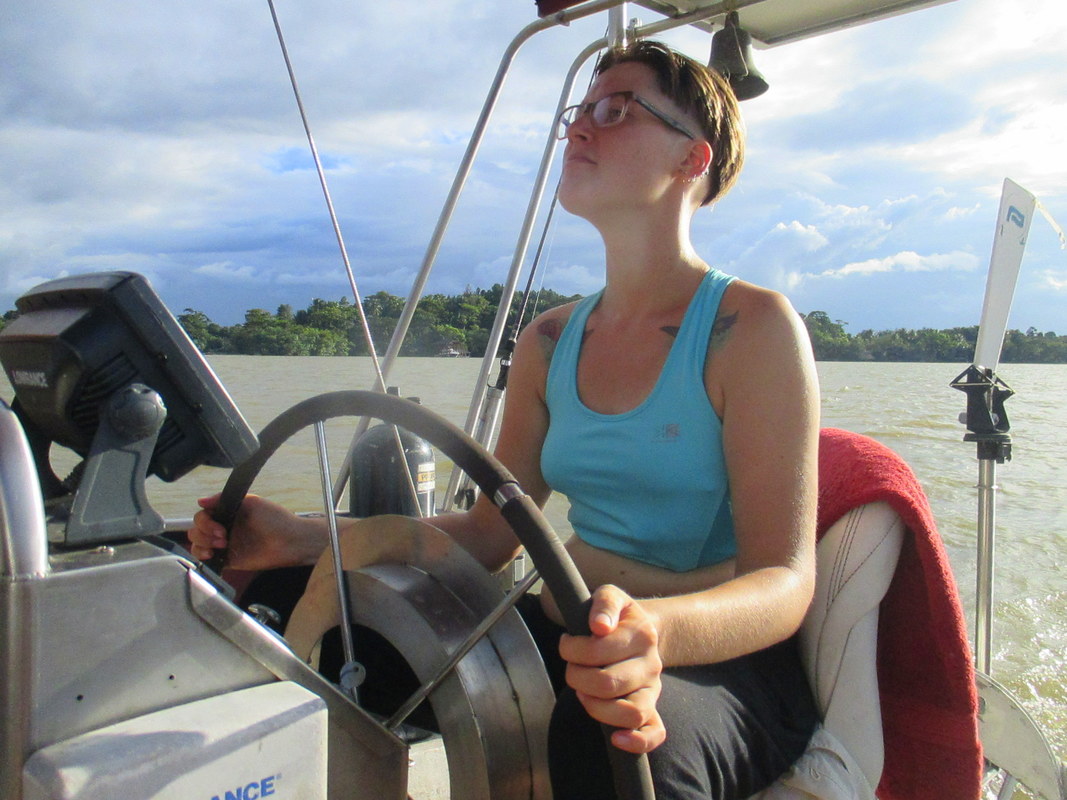 ​We ate all the vegan snacks we took along and Hanna prepared the kayaks for a midnight discovery tour. I sat on the deck listening to the rain arriving. That's something I never heard living in the city... In fact, the first time I heard the rain coming was during the month I spent in the rustic jungle of Panamá. You would hear the rain from a distance slamming on the trees and leafs, quickly approaching. At the last moment you could see it raining on one side of the hill house, while at the other it was still dry. Here, out on the water, you see the thick, dense, extremely local rain shower quickly moving at you, as some conquering monster, wrapping you in its claws at last. It is endlessly intimidating, accelerating and fascinating. 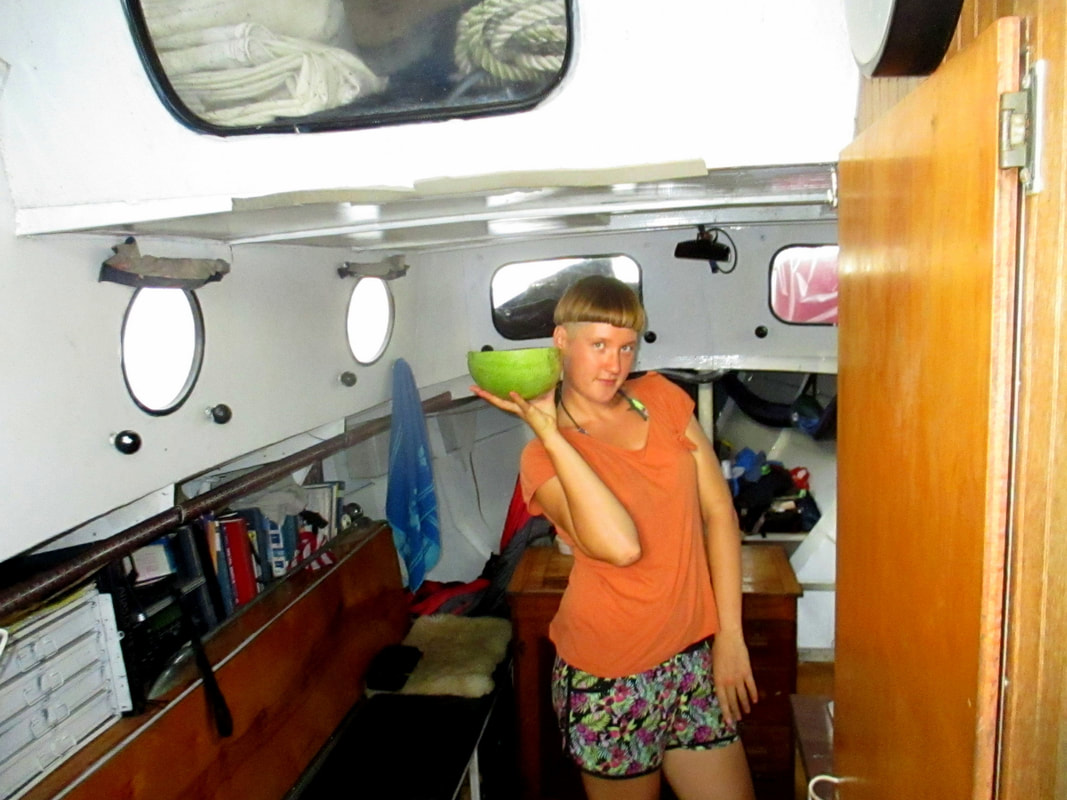 ​We fell asleep watching some John Wayne movie in the hammock and I woke up from the sound of the anchor. Jack took us to some hidden waterway where the kayaking is out of this world. Once we disappeared in the rain forest I felt like sliding into a dream. Straight through the jungle, cutting a sharp line through the motionless water, observing bird species new to my eyes. Looking at Hanna enclosed in the green pattern of wild vegetation and its exact reflection it felt like peeking through a kaleidoscope.
Back in the boat Jack gave me his binoculars and pointed at a peaky-mountain that seemed to cover a yet unknown Maya pyramid. I love Guatemala. 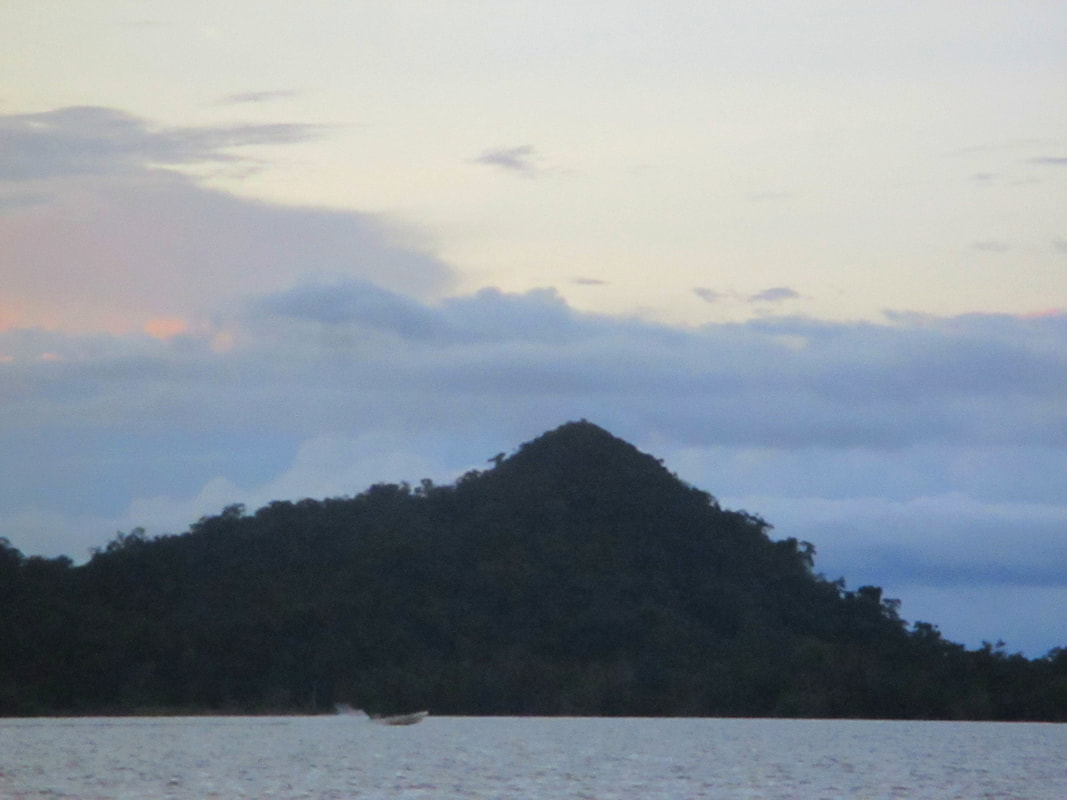 After this adventure Jack navigated the boat to Livingston. The contrast couldn't have been bigger. As it was too dangerous to take the boat to shore, we had to anchor it in the open water and kayak out.

As piracy is a thing here, someone had to be on the boat at all times. With a machete and a gun.

The festival hadn't started yet, Hanna and I concluded once we strolled around town. It had, they just define 'a party' differently here. We just call it lame. After some kind of lottery, the entire village walked down to a stage on a basketball field. On this stage were two girls 'dancing'... or having sex with an invisible person. We didn't see these ladies' faces, we just stared at their gigantic almost naked bums pumping and shaking on the reggaeton beats at an incredible speed.
The audience existed of families with young children, looking breathlessly at this spectacle with their arms crossed. It was odd to watch, apparently this is called appropriate here. It was nothing like the expected Garifuna drums extravaganza we were hoping for.
Disillusioned we decided to go back to the boat, which we couldn't reach as a storm came up and the waves were too high and the current too strong to paddle back. We hussled a ride with some taxi boat and jumped into our heavy swaying temporary home base. This was a forecast for the rest of the night: I did not sleep one single second, I was too busy not to puke, holding on to anything that could diminish the extreme rocking of the world around me. It was the longest night I ever had, but one I would not forget anytime soon.

The adventures of the Caribbean coke-boat.
* Jack is not his real name. I on purpose didn’t post obvious photos to not relate a kind person with hard drugs on the internet.

I ended up returning to Río Dulce... this experience (incl. pictures) can be read in the Semuc Champey blog.

​
In order to support the travelers’ community, I spend many hours per week to adequately document all information and advices for prospective visitors, accompanied by a (hopefully) entertaining insight into my personal observations and experiences. This service is and will remain free. However, if you voluntarily want to make a contribution and support my travels and thus the creation of new stories and information supply, here is the button you’re looking for:
Donate
Related:
- Hiking adventures in Xela, Guatemala
- Bohemian adventures in Lago de Atitlan, Guatemala
- The most beautiful natural treasure of Guatemala: Semuc Champey
- The biggest Maya city: Tikal, Guatemala
​- Sailing the islands of San Blas, Panamá
- The city of cocaine: Medellín, Colombia
- The cocaine-bar Route 69 in La Paz, Bolivia
- Hitchhiking with a drug dealer in Paraguay
​- Just across the northern border: Punta Gorda, Belize
- Just across the southern border: Tela, Honduras