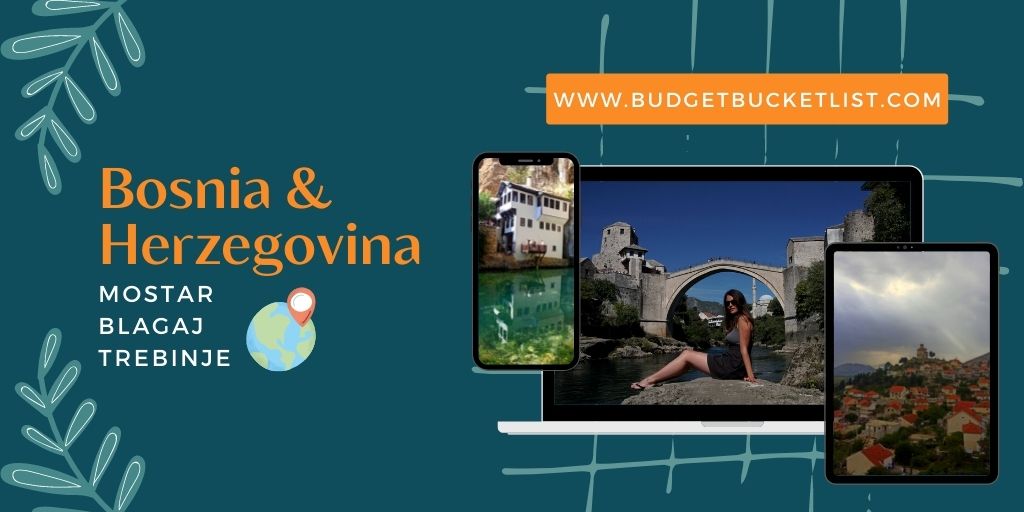 "This place is like a fairytale", my friend sighed. It’s true in a way, I concluded looking around me. Be it a fairytale read by everyone. Places like this generally make me skeptical. Until the last minute I tell myself I definitely won’t go there because everyone else already does… and when I finally make it over there anyway, I’m still reluctant to give in and allow myself to actually like it. It's always a tough balance: a place worth visiting and being visited too much. Mostar went a bit overboard tourism-wise in my opinion, but I tried to focus on the undeniable beauty of the town.

“The town” which everyone refers to is in fact the few streets of the tiny historical centre you can walk through in about 15 minutes. In reality this area is only a small fraction of the actual town of Mostar, which is with its 1,166km² quite large and predominantly consisting of residential buildings* where the locals actually live. In fact, when you hike up to the cross look-out point, the historical heart that bloomed out to be a social-media-sensation is hardly visible among the urban jungle filling up the entire valley. This part doesn’t contain any residents (unless they’re there to make money), but can be considered a sequence of souvenir shops, pricy English-menu-restaurants charging euros instead of Bosnian marks, and rather simple mosques and churches somehow subject to entry prices. I visited in the shoulder season during covid-times and was already openly annoyed by the herds of tour groups clogging the narrow cobblestone alleys. Imagine high season in regular context.


* Some still filtered with bullets as silent memorials of the Bosnian War. If you find these kinds of sights as intriguing as I do, I recommend a quick visit to the Sniper Building (next to the park with the totally random Bruce Lee statue). 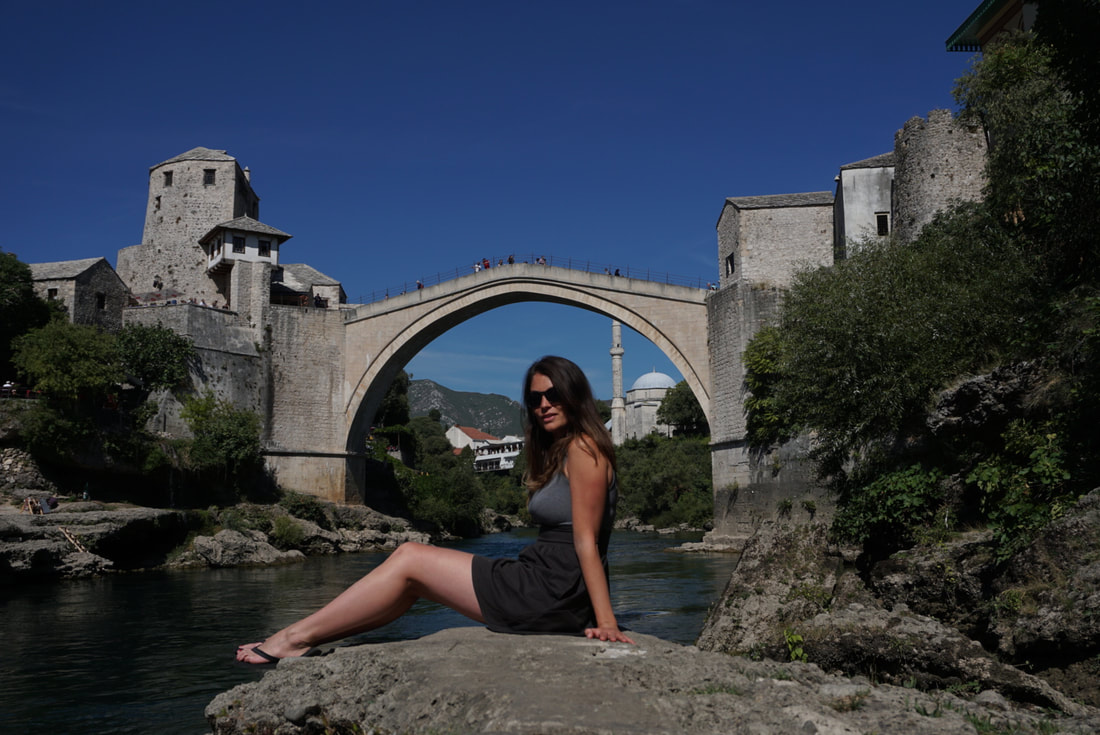 
I’m aware I sound rather negative, but don’t get me wrong: Mostar is stunning and I recommend going (but you were doing that anyway). Those swirling little streets with their colorful houses tucked around it like a table full of birthday presents… the Neretva River idyllically streaming through it, cutting the town in half to make space for those wondrous bridges Mostar became famous for… bold souls jumping off of them once they gathered enough tips. It truly is a dream, in a highly commercialized Disneyland-kinda-way. In between all the hysterical drooling in a digital sea of superlatives, I guess someone has to swoop in for a little reality-check. Let me be that party pooper.
Blagaj

What can be said about Mostar, certainly also counts for Blagaj. There’s a reason it’s the #1 daytrip-favorite among the crowds already in the area to visit Mostar. Lines and lines of tour buses queue up to release an ongoing stream of visitors to check out its main sight: the Dervish Monastery creeping up against a cliff. Truthfully, the white plain building itself isn’t too impressive on its own… but the positioning of it, tucked in between that rough karst ridge and the incomprehensibly blue waters of the Buna River, creates quite the spectacle. Most people combine it with an overpriced lunch at the busy waterfront, now that they’re there anyway, and then leave.

As we decided to spend the night, we engaged in a more thorough exploration. This is when I truly fell for Blagaj. We hiked up to the medieval fortress, locally known as Stepjan-grad, which forms a part of the outline of a fortified town complex which is more than 2 hectares big (nowadays only the ruins are visible)! The view from the top of the walls is unparalleled. From this spot you can find a hiking trail leading towards the Orlovača Peak, where you stumble upon rather unusually shaped ridges, stretching out in incredibly thin lines. The best thing about this location is a scenic little mountain hut, which is placed there for hikers like yourself and can be used entirely free of charge. Now you know this in advance, go out and actually do that! In Blagaj there is no better setting to wake up in, period. Brave souls can continue the route and close the hiking loop via the Via Ferrata Vulin Potok, which is a challenging climb-and-clatter-trail that has to be completed with the correct equipment. Climbing is the prime outdoor sport in Blagaj and at this stretch of the track you’ll find out why!

​
* I stayed 3 days in Mostar and 1 day in Blagaj, but that’s rather unnecessary. You can see Mostar in the morning, Blagaj in the afternoon and on the same day already be on your merry way to Trebinje. I just like to take things slow, because as a full-time traveler I can. But you don’t have to.
Trebinje

It took us 5 separate hitchhikes to get there, but I’d do it all over again. Trebinje is my happy place in (Bosnia and) Herzegovina. It’s another place that you could potentially check off in a day… or less, considering the museums are either untraceable or locked for covid, the mosques are closed for visitors, and the colorful “Temple of the Holy Transfiguration of Our Lord” can be seen in a mere minute. But why would you sell yourself short? I felt good in Trebinje.

I just wanted to spend my days strolling along the Trebišnjica River and stare at the reflections of its ancient bridges… hike the steep trails crawling into the bare mountains characterizing Herzegovina… end a relaxing and peaceful afternoon with a drink in its truly overwhelmingly picturesque old town. An old town that, unlike Mostar, isn’t the only thing that’s worth photographing: The entire patch that forms Trebinje, from modern city center to suburbs, grabbed my full attention. I liked the life unfolding at every street corner like a different storyline, acted out in a laidback and calm manner. I turned my head at the skilful street art, portraying the faces of those who aren’t anymore on the streets where they used to live. I enjoyed getting lost and suddenly be outside of town, among the peasants tossing me a bunch of grapes during harvest season.

Grapes! Good news indeed! Trebinje is the cradle of Bosnian wine. Yes, that is a thing, and I’m of course the one who’s telling you about it. Whether or not it's the decision-making factor in my 5-days-stay, the proximity of a handful of wineries surely is a pleasant addition to an already overall pleasant residing. There are 3 wineries within walking distance from the centre (as even though you might have a vehicle, it’s going to be tricky to safely drive back after the tasting). The most awkward and unwelcoming tasting in the history of tastings took place in the Anđelić winery, which however served the best Vranac of Trebinje I tasted. The most interesting experience I had in the Tvrdoš Monastery, which combines the act of drinking a pleasant home-grown cup with a cultural encounter. And with quite the hike, as it’s a considerable distance from downtown Trebinje (if you’re gonna walk it, take the trail left of the river, not on the right side along the highway – check my GPS recording). Keep in mind that this is an actual active monastery inhabited by monks, and proper cover-up is provided and required. The most central and therefore well-known winery is Vukoje, located in a fancy building providing fantastic panoramic views all over Trebinje. This place is known to be more upscale and therefore rather pricey. I can recommend the Vukoje 30 Syrah, Hercegovacky Vranac, as well as the Cabernet-Merlot. You can skip the Galerija Merlot and the Primavera Red and Rosé. Now you’re throwing money at it anyway, I recommend ordering the cheese platter, if only to try the Sir-Iz-Mjeha cheese. The production process bothers me a tad (let’s say it’s not too veg-friendly), but holy f*ck that shit’s good. And everything is a bit better because you’re in this place in the world.

Trebinje, I tip my hat.
* I do not recommend the city beach, which is rather depressing concrete plateau.
In order to support the travelers’ community, I spend many hours per week to adequately document all information and advices for prospective visitors, accompanied by a (hopefully) entertaining insight into my personal observations and experiences. This service is and will remain free. However, if you voluntarily want to make a contribution and support my travels and thus the creation of new stories and information supply, here is the button you’re looking for:
Donate
Related:
- Read more about Bosnia & Herzegovina: Sarajevo, Jajce, Banja Luka and Sutjeska National Park (incl. Maglic Peak - the country's highest!)​
​- Discover the splendors of Macedonian Wine and its best wineries!
- Travel Argentina's main wine regions: Mendoza & Cafayate.
- Explore one of the main wine countries of South America: Chile!
​- Carmelo, the main wine destination of Uruguay.
- Go for a bicycle wine tour in New Zealand's North Island & hike the wine route of Cromwell!
- Visit the wineries of Cyprus in the Troodos mountain region.
- Sample the flavours of Greece in the Epirus wine region.
- Where can you find the best wine of Malta? Read it here!
- Montenegro's main winery is located in... [click here!]
- Get your discounted wine experience in Bucharest, Romania!
- "Con pan y vino se anda el Camino" - the Camino de Santiago passes right through Spain's main wine country! Check it out!
- Get your Albania itinerary ready: Berat, Gjirokastër, Korcë / Ohrid Lake, Theth, Shkodër, Tirana, Mount Korab & the coast!
- Citytripping in Denmark's capital: Copenhagen
​- Discover Romania's enjoyable cities: Bucharest, Brasov and Cluj Napoca
​​- The prettiest historical town in Romania: Sighisoara!
​​- History preserved: Time capsule of Romanian culture Maramures
​- Be about Bulgaria: Check off Bansko, Belogradchik, Plovdiv, Sofia and of course Veliko Tarnovo!
- Where modern meets classic: Vilnius, Lithuania
​- 8 ways to save money in Vienna, Austria
​​- German gems: Aachen & Frankfurt am Main
​- Europe's best skiing & hiking: Get your ass over to jaw-dropping Switzerland!
- A capital surrounded by scenic little villages: Lisbon, Portugal
​- Discover more Belgium: Antwerp & the most kick-ass Flanders itinerary!
​- Budget Bucket List hitchhike trip to... Kosovo!
​​​- Guest Blog 'Kosovo Girl Travels': Travel tips and stories from Kosovo's first and only travelblogger!
- Where city and nature meet: Edinburgh, Scotland
- Unravel the mysteries of Serbia
- Spanish citytrips: Barcelona, Malaga & Sevilla
- The modern delights of Frankfurt am Main, German
​​- Discover the splendours of Turkey: Istanbul on a Budget & Reasons to visit Edirne
​​- Diving into Malaysia's history: Melaka
​- Korean culture at its finest: Explore Gyeongju!