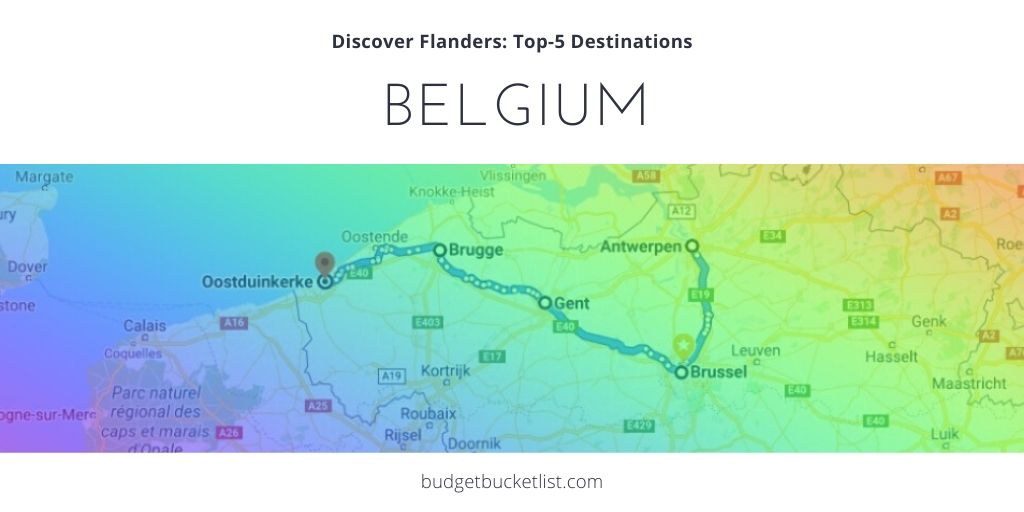 Planning your Europe trip? So let me guess, you have Italy, France and Holland (which for the average tourist equals Amsterdam - don't make that mistake) thoughtlessly included in your list? Okay, very well. But what about some lesser-known underdogs like, for example, Serbia, Lithuania… or Belgium?

To me, Belgium never felt like going abroad, as from my hometown it took me literally 30 minutes by bicycle to cross the border… a border that was marked by nothing more than an easily ignored sign. If it wasn’t for the terrible potholed roads that suddenly make your head slam against the roof of your car (taxes are much lower here than in The Netherlands, which has pros and cons so to say), or the accent that suddenly became much softer and politer (Flemish is basically ‘friendly Dutch’ – the words are, besides some alternative expressions, exactly the same), you could easily forget you entered an entirely new country to begin with.
If you’re crossing the Dutch border from Bergen op Zoom / Hoogerheide, you’ll pass the beautiful natural park Kalmthoutse Heide, overlapping both countries


So, let’s assume I convinced you somehow. You’re including Belgium. But: You only have 3 months of Schengen visa, and you can only quickly include it along the way from, let’s say, Amsterdam towards Paris. Fair enough, I present to you the all-favourites-included-itinerary of northern Belgium... Flanders (Vlaanderen): 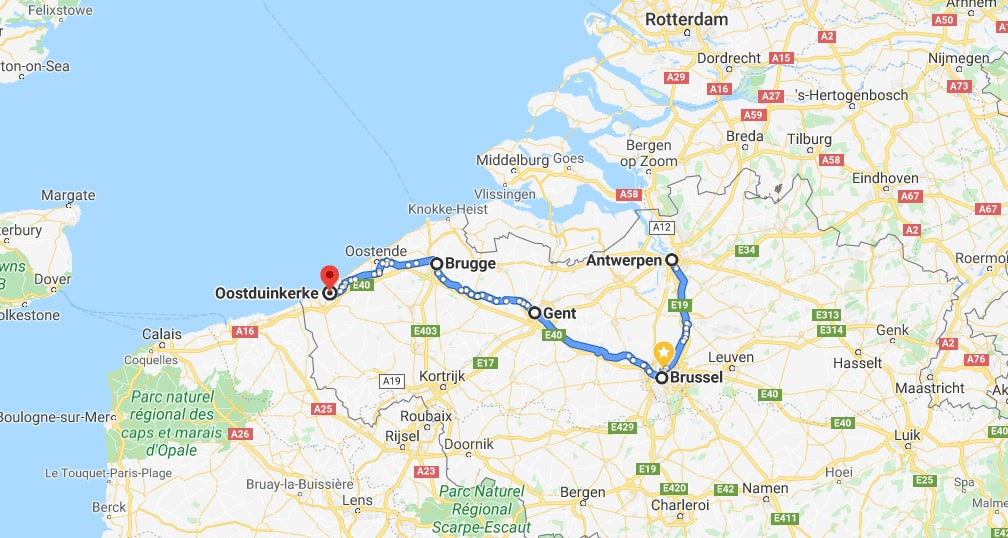 Save this article for later!
​Save on Get Pocket | Save in Browser Bookmarks| Save on Instapaper
Stop #1: Antwerp  (Antwerpen / Anvers)

There’s a direct train from Amsterdam to Antwerp that will take you a shocking 1:15h of travel time, so there’s really no excuse (there’s also a cheap-ass Flixbus station right in the heart of the city). Antwerp, besides housing Benelux’s largest cinema and the sweetest affordable non-mass-chain clothing shops, is a feast for the eye. Even though it’s Belgium’s second largest city, the cosy central area definitely has a more intimate feel to it, with perfectly preserved historical buildings inviting you to experience the country’s rich history. Walk along the many attractions, such as the Cathedral (don’t miss out on the Nello & Patrasche statue in front), Castle Het Steen, Zurenborg and the impressive Old Market Square, or visit one of its many museums, of which a big chunk of them are free the last Wednesday of the month! Besides its strong connection to history, local culture is always in the making: Antwerp works like a magnet on artists, writers and creatives… if this is more your cup of tea, definitely download the free Street Art Antwerp app for a self-guided tour along the latest graffiti artworks.

For a more thorough Antwerp travel overview, including daytrip- and multi-day itineraries as well as local advice: Check out the Antwerp Blog!

Admit it, you don’t want to leave Belgium without having checked off its capital. Full disclosure: I’m not including this one because I think you should go here… I’m including this because I know you will, whatever I say. I’m not necessarily the biggest fan of this big, chaotic city (neither were my Belgian friends I ran this itinerary by), yet I will come to terms with the undeniable highlights: the Grand Palace, Atomium, Parc du Cinquantaire, the European Parliament (you kind of have to), le Musée des Beaux-Arts d’Ixelles, Luxemburg Square and the National Basilica (…and a personal favourite: the René Magritte Museum) – and while at it, you might as well make a goofy photo stop at the Jean-Claude van Damme Statue as well as Manneken Pis (“Pissboy”- an extremely famous super-tiny fountain of a little kid taking a leak – there’s also a female and dog version: Jeanneke Pis & Zinneke Pis).

As the names of some sightseeing stops already give away: The capital is a melting pot where the country’s two main languages come together: Northern Flemish (Dutch) and southern French… the ‘francophones’ overall being very French in their behaviour, refusing to speak anything else (they literally answered all my Dutch questions – which they perfectly understood – in French, as god forbid they foul their tongues with that filth), while the Flemish-speakers generally show a much more flexible attitude in both their fluency and behaviour.
Stop #3: Ghent (Gent / Gand)
​
In case my previous report didn’t quite convince you about the qualities of Brussels (which means I reached my goal), you might as well save yourself from that little traffic-clogged side-tour and take a straight road to Ghent, only 60KM from Antwerp. Being a city both strongly rooted in medieval history as well as a youthful focal point of student life, it melts into a unique combination of open-minded, tolerant and creative culture against a backdrop of jaw-dropping architecture. Expect to find castles, authentic facades, picturesque waterside-scenes, ancient old cathedrals and cobble-stoned alleys. Oh, and I probably shat on my ticket to vegan-heaven by saying this: But haul your ass over to restaurant Amadeus (there are two – one for lunch, one for dinner), where the world’s most orgasmic spare ribs are served accompanied by I-can-die-peacefully-after-this-jacket-potatoes... the unquestionable highlight of my pre-plant-based-era I secretly still have exciting dreams about. 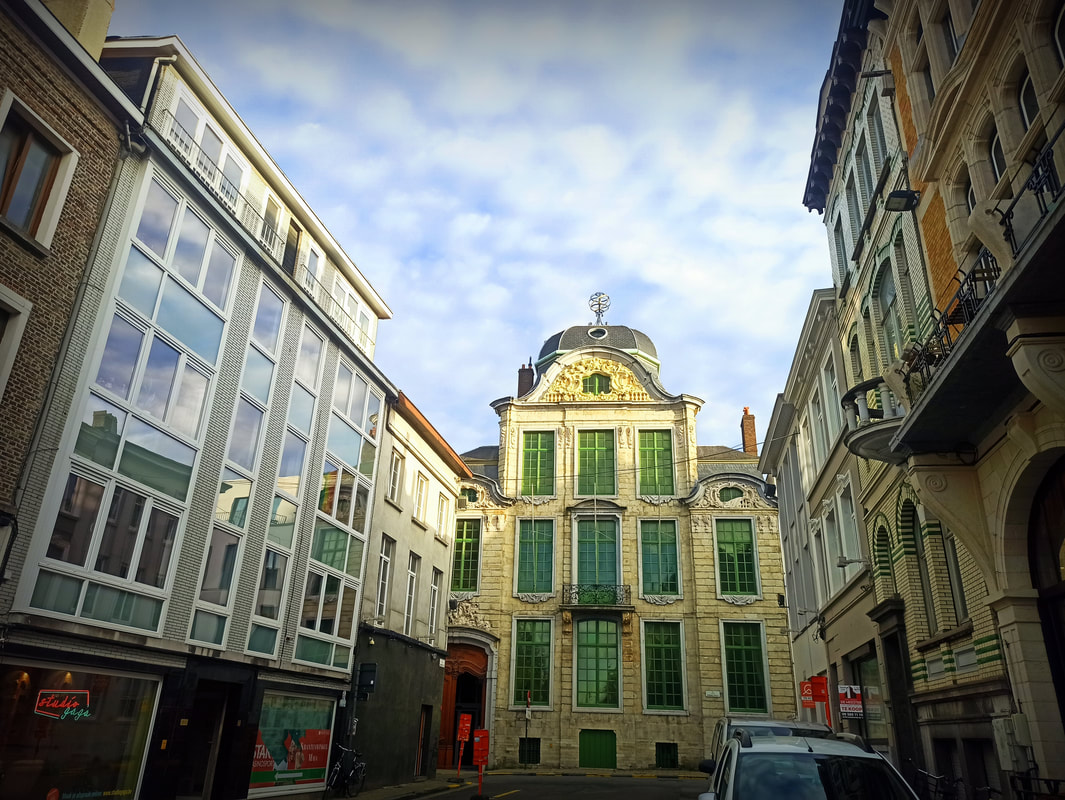 Ghent, but smaller and cuter. You won’t need more than a day to see everything of this attractive little borough, but quite likely you’ll find yourself staying here the longest of your entire Belgium visit. It just feels good to be here. Some cities pride themselves in having a UNESCO World Heritage Site… Bruges is one. In its entirety. Where Belgium is king in capturing that true ‘European feel’ of medieval picture-perfect city hearts, Bruges wears the crown. Get lost in the exhilarating labyrinth of little alleys, canals and pub-dotted squares… or simply install yourself on one of its sunny terraces, stuffing your face with thick fluffy fries flushed away with local craft beers – which sounds like a totally feasible option to me (to keep it local: try the Brugse Zot, Brugse Straffe Hendrik, Brugge Blond, Brugge Tripel, Brugs and Brugse Babbelaar under the flag of ‘culture-blending’ – then continue with the other 1600 types of 100% Belgium beers on tap, you’re on a mission here).

Stop #5: Oostduinkerke
​
From Bruges the only logical option onwards is the Belgian coast, which would be a downright shame to miss out on, especially in summertime. Naively I initially listed Knokke, which seemed the better of the two I know (the alternative being the teenage-binge-drinking-bender-pass-out-spot Blankenberge). However, locals resolutely pointed my attention towards Oostduinkerke, home of the country’s most wondrous beach and nature reserve, enriched with fishery folklore: The shrimpers on horseback, still going at it anno 2020 (maybe attired with face masks though) – since 700 years. 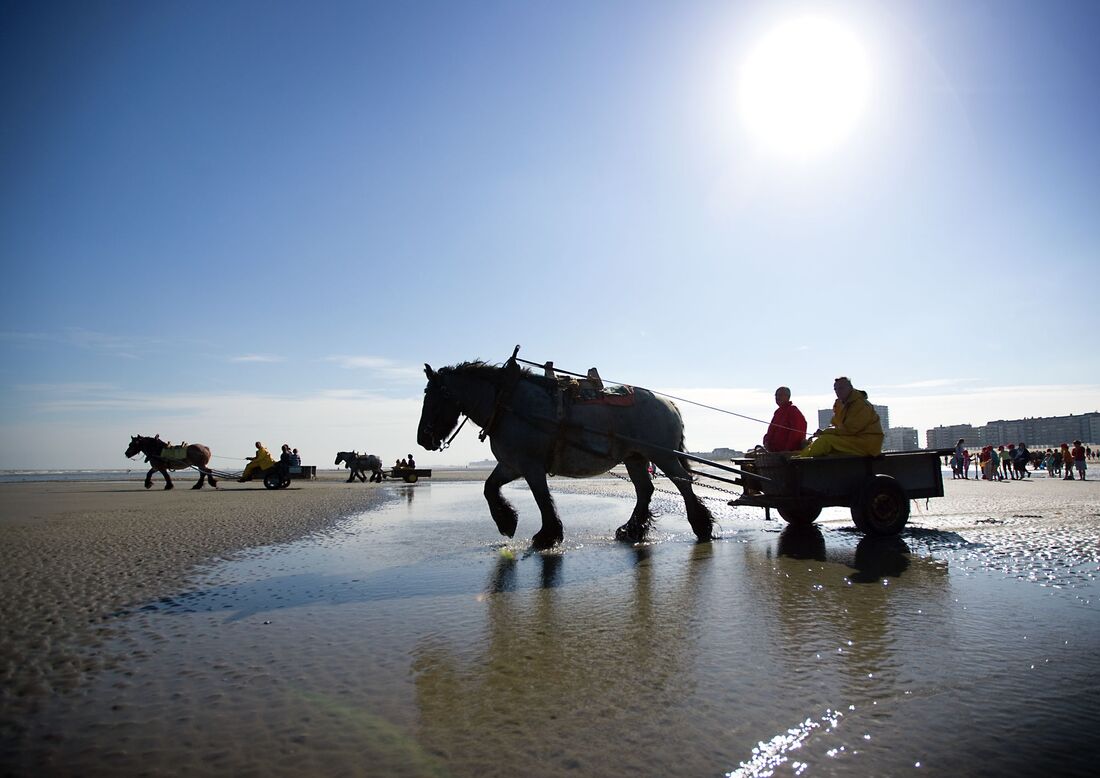 Tip from a local (not me): Checked off Flanders and ready to discover more of Belgians ‘French part’ Wallonia – possibly en-route to Luxemburg or France? Definitely make a pitstop at Durbuy.
​
Tip from a visitor (me): Overall, the Ardennes are a must-visit for any hiking-, camping- and nature enthusiast (I check off all 3 boxes).
The Ardennes is one of my favourite go-to’s for not-too-far-from-my-home-town-camping. These photos are shot during a green getaway in Baelen-Membach, close to the border point of Wallonia-Belgium, The Netherlands and Germany (all three languages are spoken here natively).
In order to support the travelers’ community, I spend many hours per week to adequately document all information and advices for prospective visitors, accompanied by a (hopefully) entertaining insight into my personal observations and experiences. This service is and will remain free. However, if you voluntarily want to make a contribution and support my travels and thus the creation of new stories and information supply, here is the button you’re looking for:
Donate
Related:
- Dirty Dutch: Discover the best destinations of The Netherlands. Amsterdam NOT included.
- Europe's best skiing & hiking: Get your ass over to jaw-dropping Switzerland!
​- Discover England: Bath, Brighton, Isle of Wight, Portsmouth and London!
​- Go Green, Go Scotland: Easdale, Edinburgh, Glasgow, Glencoe / The Highlands and Isle of Skye
- Unravel the mysteries of Serbia
- Visit Europe's mini-countries: Gibraltar, Liechtenstein, Luxemburg, Kosovo & Wales!
- The 3 golden rules to travel Sofia on a budget! & Why you shouldn’t miss out on Plovdiv! [Bulgaria]
​- Citytripping in Denmark's capital: Copenhagen
- Where modern meets classic: Vilnius, Lithuania
​- 8 ways to save money in Vienna, Austria
​- Explore Cyprus: Check out the Cyprus Nature, Cyprus Top-5 Cities and the North Cyprus Blogs!
- Spanish citytrips: Barcelona, Malaga & Sevilla
​- German gems: Aachen & Frankfurt am Main
- Hiking Poland's longest mountain trail (550km) with a tent: Glowny Szlak Beskidzki - check the reports here!
- Walk like a pilgrim! 6 weeks on the Camino Frances towards Santiago de Compostela / Finisterre (900km) - check the reports here!
​- Graffiti hotspots in South America: Bogota [Colombia],  Sao Paulo & Porto Alegre [Brazil], Valparaiso [Chile], Asunción [Paraguay]
​- Malaysia's street art hotspots: Penang & Ipoh!