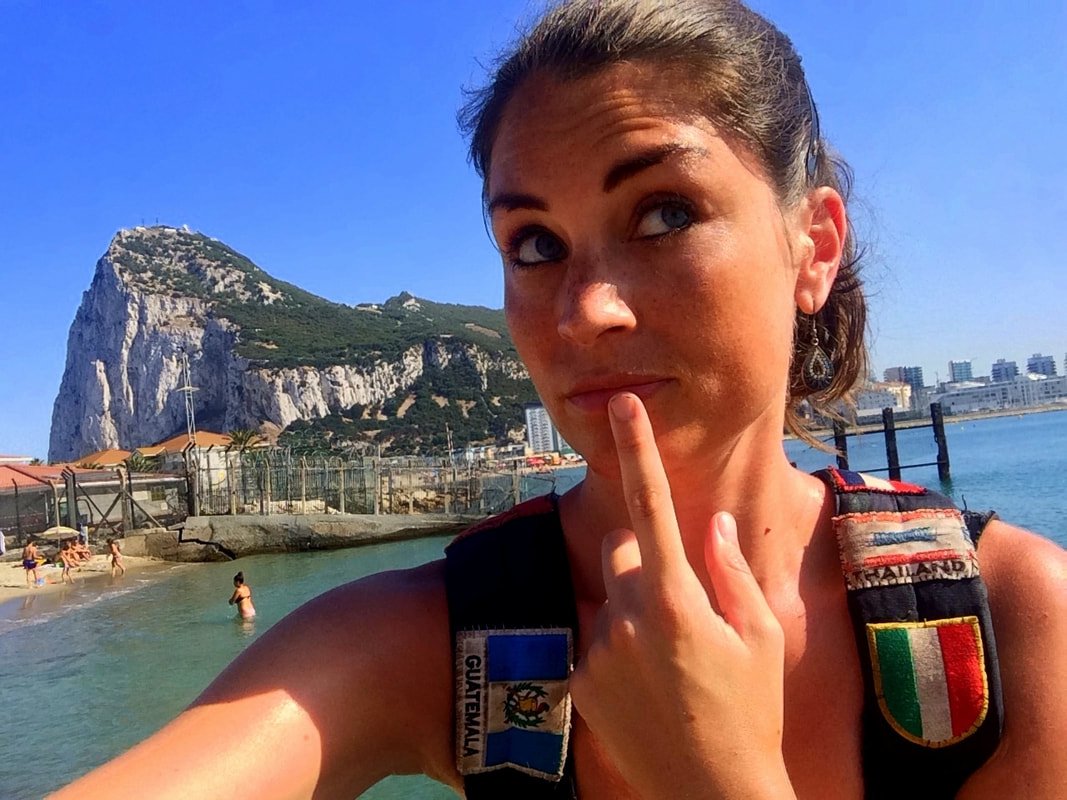 I stared at the map of the country I was located in.

Just like how a supermarket manager can glance at his perfectly mirrored grocery shelves or how a gardener admires his immaculately trimmed rose bushes, a traveler can smugly treasure the new land he just visually conquered.

I let my finger run across the man-made borders, useless concepts triggering false sentiments of patriotism but yet so central in our way of defining history and giving meaning to the world we live in. My finger glided along the Spanish frontier and slowly came to a stop at the southern tip, flipping out like a little appendix. Gibraltar.

The word shoot out of the map like a little fire flash, surfacing hidden memories of the strict face of that primary school teacher I never liked tapping the Europe map with a wooden pointer stick, after which she slapped the desk of the classmate that fell asleep with a deafening bang. GI-BRRRRAL-TAR, repeat after me, this is GIBRALTAR! See me after class to write this down 3000 times!

Yet, I forgot this country somehow. Maybe because it’s not really a country. Geographically speaking, it makes sense it’s part of Spain, as it’s right attached to it and with its 6.8 square km² doesn’t even really qualify to be a province… but no, after Phoenician, Neanderthal, Carthaginian, Roman, Vandal, Visigoth and Moorish reign, it is now – tadaaa – English. Kind of same-same as with the Falkland Islands (Malvinas, por favor no me mata, queria que decir Malvinas!) next to Argentina, enraging the local country it should have geographically belonged to, the colonies’ citizens however fiercely voting to be British. It’s the accent, it must be that hot accent…

Useless borders aside, it is a new kinda-country to check off. And that’s exactly what the Budget Bucket List does, even though people had warned me there’s absolutely nothing exciting to find in Gibraltar. The seed was planted in my head now, so it’s happening, end of discussion. Therefore I accepted that tormenting alarm that went off way too early, as from Malaga this would be a doable daytrip.
​
If you do it right, I mean. Which I of course didn’t. 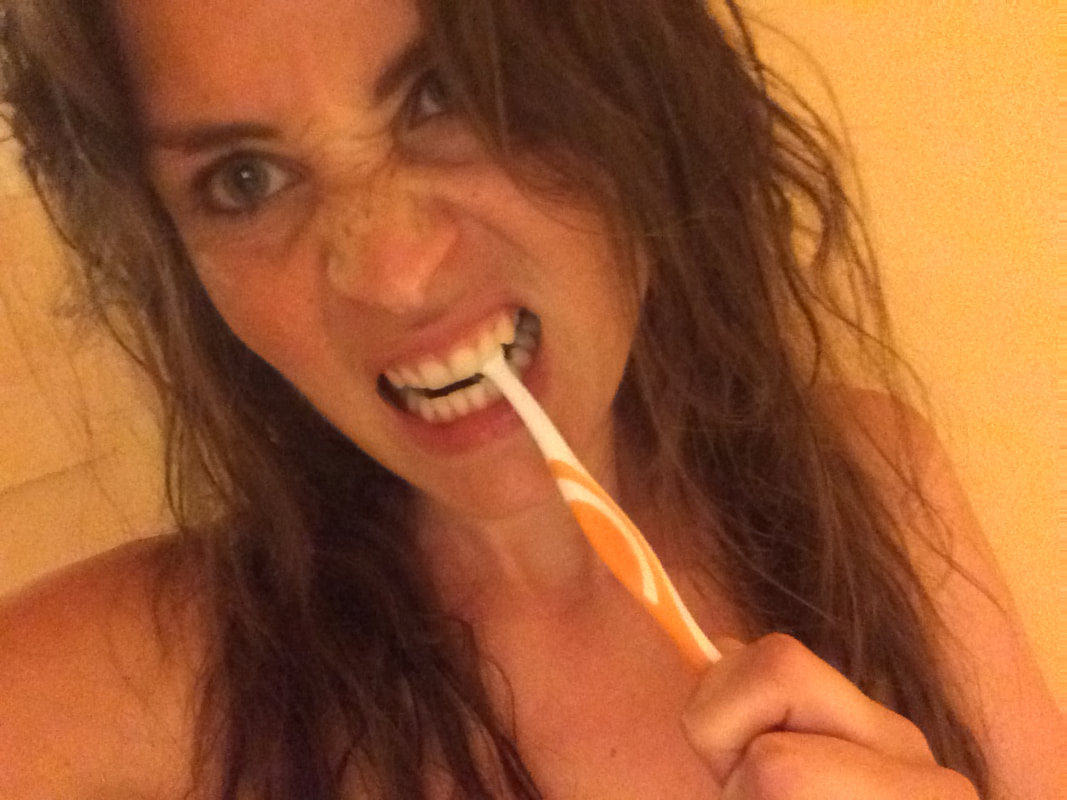 I had it all arranged so well. One day before I swiftly pre-booked an economic Blablacar-drive straight to the border, for which I just needed to take a bus to the other side of town. No probs bro, I got it all sorted out on this supersonic Moovit app, providing me with door-to-door public travel support! It’s 2017!

Yeah… that didn’t work.
​
Moovit had a magnificent route planned out over a network of streets that didn’t exist in the first place, involving jumping over a 15-meter-gap in between two pointy cliffs. 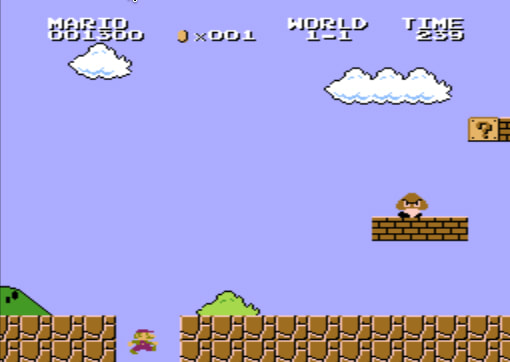 However bad I want to resemble Super Mario, this was a loud and clear no-no. I prefer to keep a clear head and come up with a rational solution, like running around like a headless chicken in the burning sun because I was gonna miss my trip I pre-paid for. After a three-km detour I decided to sprint back the entire route I just frantically walked in order to catch some Wi-Fi again and inform my driver about my poor navigating skills (read: what a crying unorganized chaos his city was in combination with the pathetic state of current technology, any excuse!) and see if I can convince the poor sheep to cancel the ride… because if I did it I still would still have been charged full price. Yes, I’m going to hell for that (and for some other stuff).
​
Two hours later, I still traveled zero kilometers. Ok, let’s just apply the old school hitchhike technique again then, because god forbid I take something as civilized as a bus… 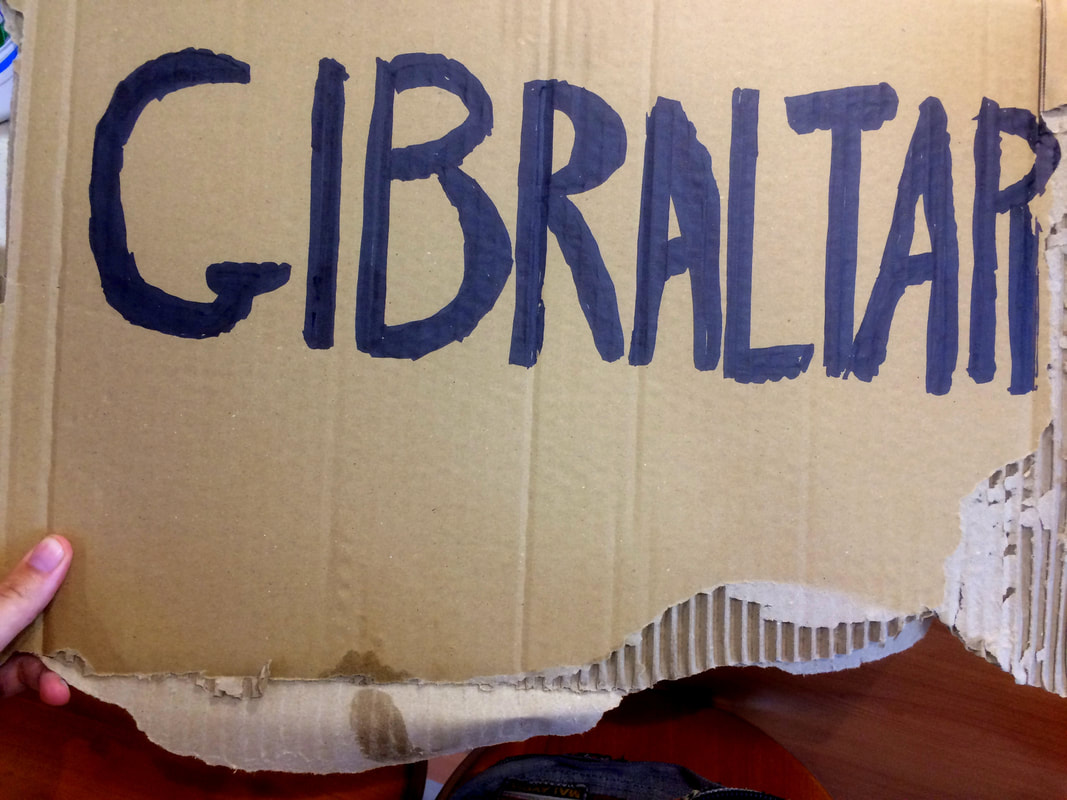 I saw on the map I could easily walk a bunch of streets up-road to trace down the highway. So with the sun roasting my face with an average 40 degrees Celsius I did just that… to find out this was actually a viaduct. I knew it’s illegal in Spain to stroll along the highway or climb down traffic structures, like most stuff is illegal in this pretending-to-be-organized country…

… but rules are usually meant to indicate where life starts to be interesting.

So I ran into the whirling greeneries and started climbing into the pointy gates blocking the access. FUCK! Electric shock! What the hell, Spain! I thought we’d be entitled to some freedom after Franco.
​
Right, Plan C. A 25-km loop to the other exit of Malaga, how the hell I’m going to pull that off? Well, let’s see if that car approaching can bring me any closer. He could, but I managed only to get a ride to the center. From there it was only a ‘very short walk’, the good man guaranteed me. Never trust those words spoken by people using cars for short distances. I walked, no I jogged, for 90 minutes before I finally reached the place. Hastily I entered a gas station to fabricate a clumsy sign with my destination, and finally, at 1PM, the journey could take off! 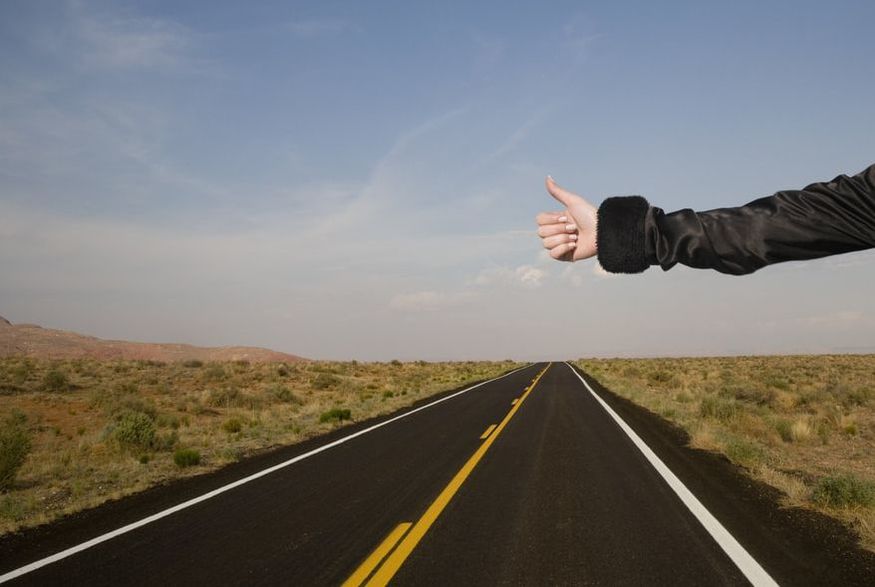 Yeah… you know, the Spanish Costa del Sol is in summertime for 90% inhabited by the orange-colored comfort-seeking, adventure-avoiding mass tourists doing not much more than getting hammered in the sun 24/7 and that’s not the crowd excited to pick up sweaty hitchhikers. Instead, I was stared at by an ongoing stream of holidaymakers eyeing me like I was about to bloodily murder their entire family with a sledge hammer.
​
Nevertheless, a car stopped after a while… a Moroccan immigrant needing an audience for his diatribe about the failure of European-Islamic integration and the tolerance crisis tearing apart the social layer of our continent. He had about ten minutes for his speech, because then he reached his end destination Torremolinos. And then it hit me: There’s no one big highway between Malaga and Gibraltar here along the coast… instead, it’s a slithering network of provincial roads threading beach towns, a new municipality starting before the other had properly finished. All traffic is local, people just head from one beach to the next. The chances of tracing down a willing traveler driving directly to Gibraltar are basically nihil. 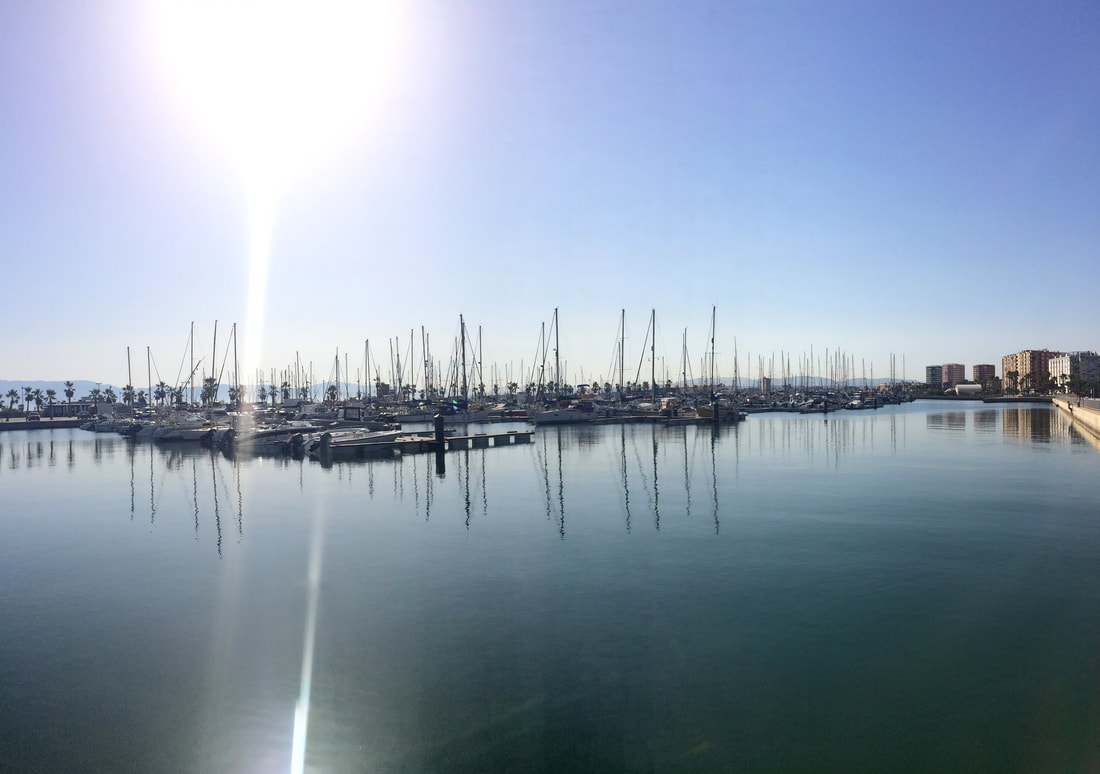 So it finally happened. I surrendered. I went into that doomed bus office and bought a damn ticket. Enough is enough.

Bad choice, once again.
​
You see, although Google Maps optimistically indicates a total travel time of under 1,5 hours, this vehicle staggers with a frustrating 60 km/h  along the silted up coast of southern Spain, offering not much more than the polluted product of the devastating anti-climax that’s called mass tourism. Watching those people slowly destroying their skin cells on the crowded coastline I wondered why I couldn’t be just like that. Simple, content with an Aldi beer and a beach chair, without the itchy need to put myself through all this inconvenience. 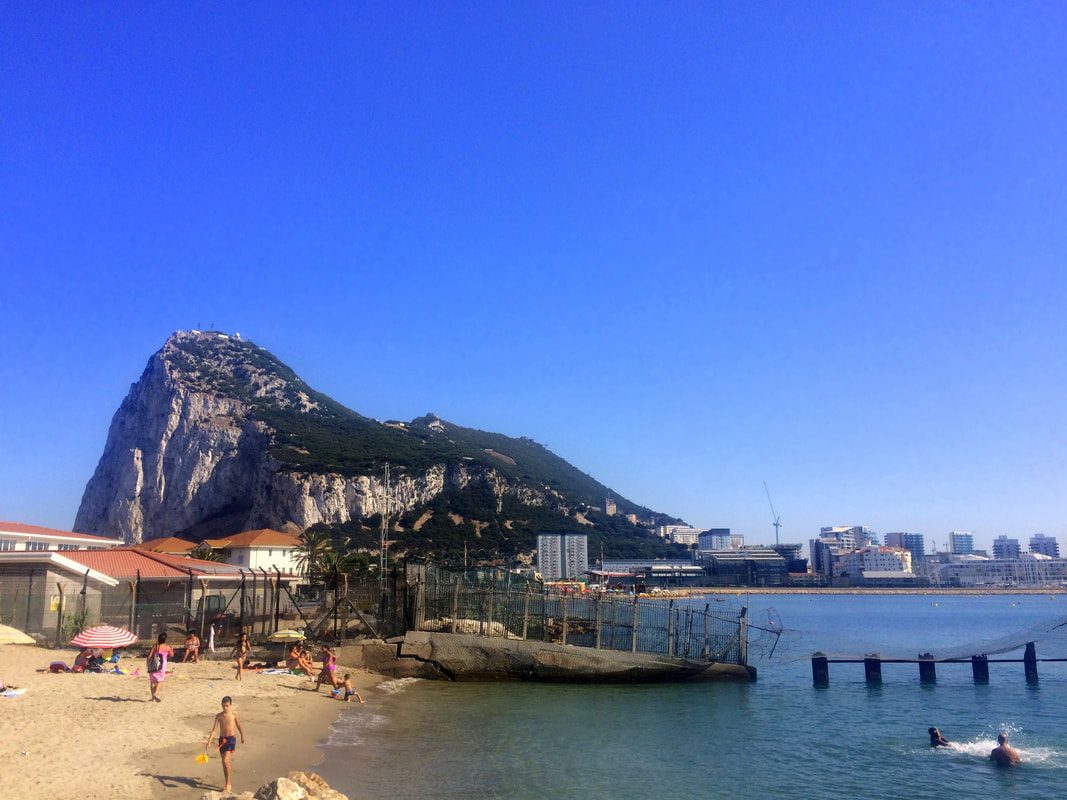 I reached Gibraltar at 5:30PM. The last bus back would leave at 7PM. Fan-fucking-tastic, I guess I just run in and out of the country then instead of ascending the only touristic attraction, the Rock of Gibraltar.

That’s cute. The worse is yet to come!

You see, even though Gibraltar is U.K. and therefore Europe, you need a PASSPORT to enter this pathetic border. I repeat: a PASSPORT! 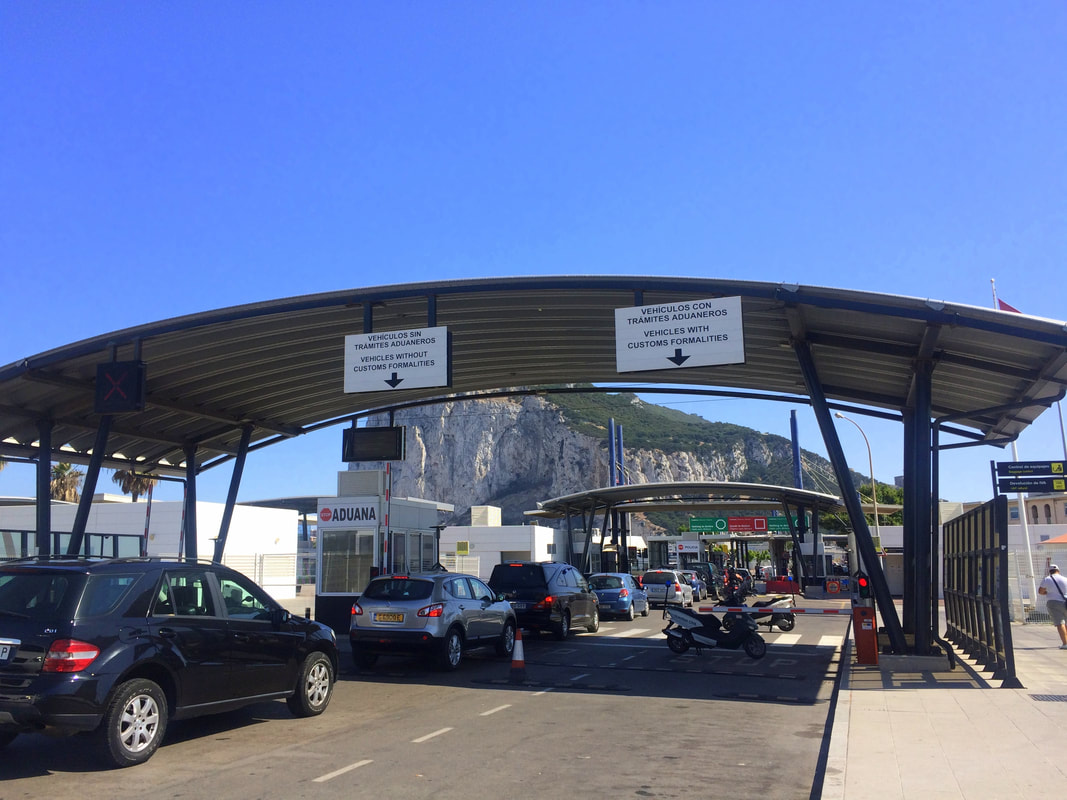 Right, when I was having the time of my life sipping out of fresh coconuts on South American beaches Brexit happened. I couldn’t care less back then, but now I stood here without an ID as it didn’t cross my mind one single second. I stared at the immigration officer with a look of defeat, quickly ran passed the border with a little loop and fast out of his office again… to spend the rest of my remaining hour staring at this country that was literally one meter away from me, like a rather ugly Fata Morgana. 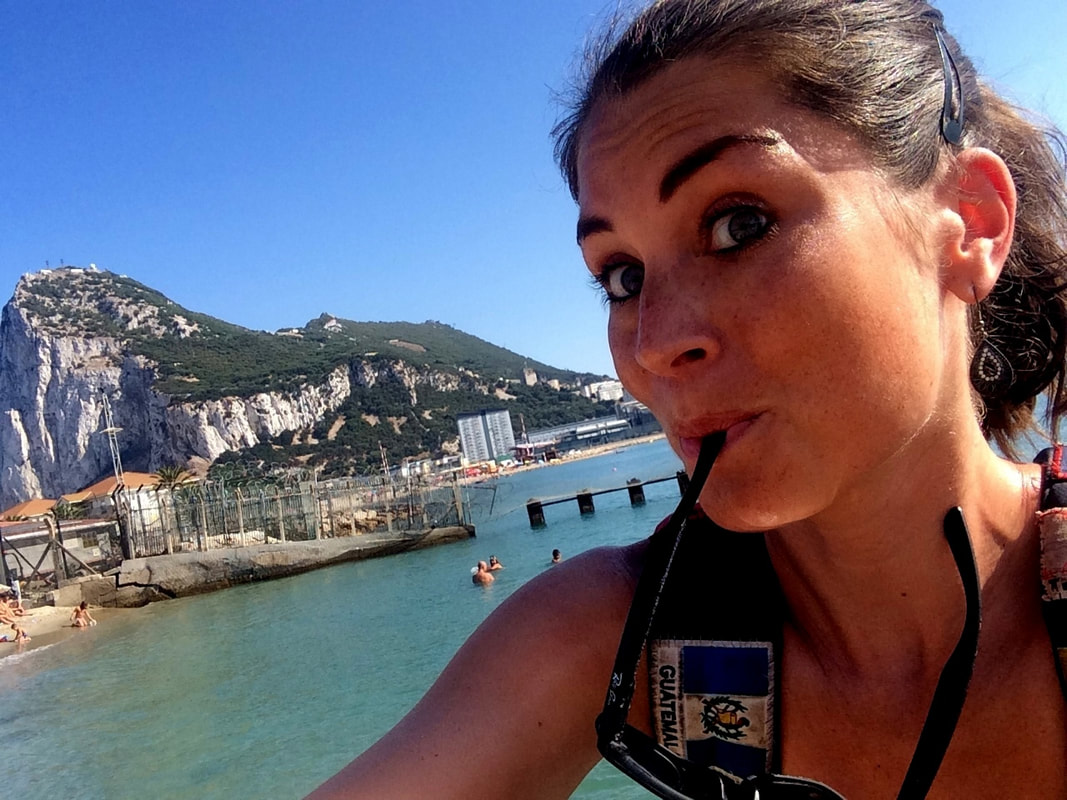 
Photo credits: 1 - 2
In order to support the travelers’ community, I spend many hours per week to adequately document all information and advices for prospective visitors, accompanied by a (hopefully) entertaining insight into my personal observations and experiences. This service is and will remain free. However, if you voluntarily want to make a contribution and support my travels and thus the creation of new stories and information supply, here is the button you’re looking for:
Donate
Related:
- Spanish citytrips: Barcelona, Malaga & Sevilla
- Visit Europe's other mini-countries: Liechtenstein, Luxemburg, Kosovo & Wales!
​- Hiking Poland's longest mountain trail (550km) with a tent: Glowny Szlak Beskidzki - check the reports here!
- Walk like a pilgrim! 6 weeks on the Camino Frances towards Santiago de Compostela / Finisterre (900km) - check the reports here!
- Relax at the beaches of the Algarve, Lisbon
- A capital surrounded by scenic little villages: Lisbon, Portugal
​- 8 ways to save money in Vienna, Austria
​​- German gems: Aachen & Frankfurt am Main
​- Budget Bucket List hitchhike trip to... Kosovo!
​​- Guest Blog 'Kosovo Girl Travels': Travel tips and stories from Kosovo's first and only travelblogger!
- The 3 golden rules to travel Sofia on a budget! & Why you shouldn’t miss out on Plovdiv! [Bulgaria]
- Unravel the mysteries of Serbia
​​- Discover the splendours of Turkey: Istanbul on a Budget & Reasons to visit Edirne
​​- Top-5 places to visit in South Limburg [The Netherlands]
​- Once British too: Belize, where they still speak English
​- Visiting the tiny sultanate of Brunei
​- The least exciting place in Lithuania: Kaunas
- The city where humanity reached its lowest point: Cancún, Mexico
- A horrendous night in Copiapó, Chile
​- The least exciting place in Colombia: Manizales
- The arsehole of Ecuador: Guayaquil
​- Not worth the effort: Huacachina, Peru
​- Avoid avoid avoid! San Juan del Sur, Nicaragua
​- Europe's best skiing & hiking: Get your ass over to jaw-dropping Switzerland!
​​- Comfortable with the uncomfortable? Bohol & Panglao Island, The Philippines
​​- 13 Strange Observations of South Korea
​​- The psychological start of a journey... in the city of Marrakech [Morocco]
​- Discover more Belgium: Antwerp & the most kick-ass Flanders itinerary!