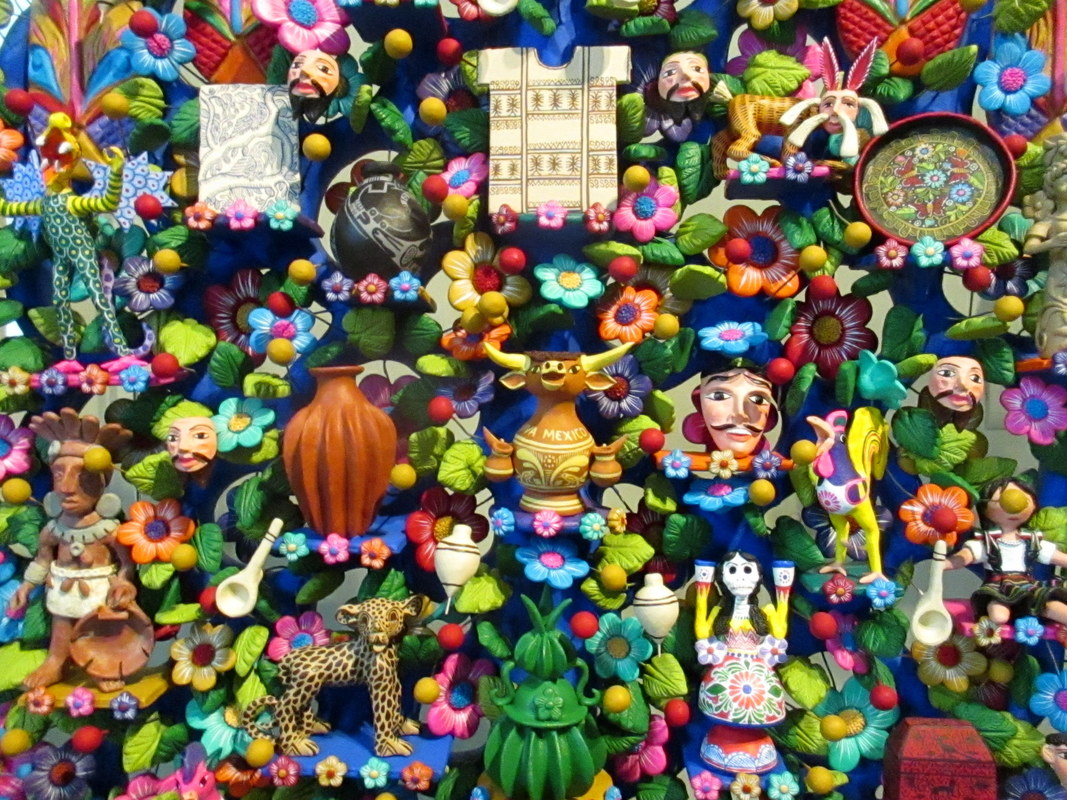 “Mérida is not an undiscovered Mexican gem like some of the tourist brochures claim […] It’s a tourist town too big to feel like a tourist town”, the Lonely Planet website informed me.
​
This could be interpreted in different ways, so I decided to give it a go now I was in the tip of the peninsula anyway. From Valladolid’s carretera I hitchhiked with a truck to the highway, from there a pick-up truck picked me up to drop me off at a gas station and there I talked to some chatty retired fishermen who agreed to take me all the way down to the front door of my Couchsurfing house in Mérida. You give and take when travelling and this seemed to be a taking-day (thank you Mexico). 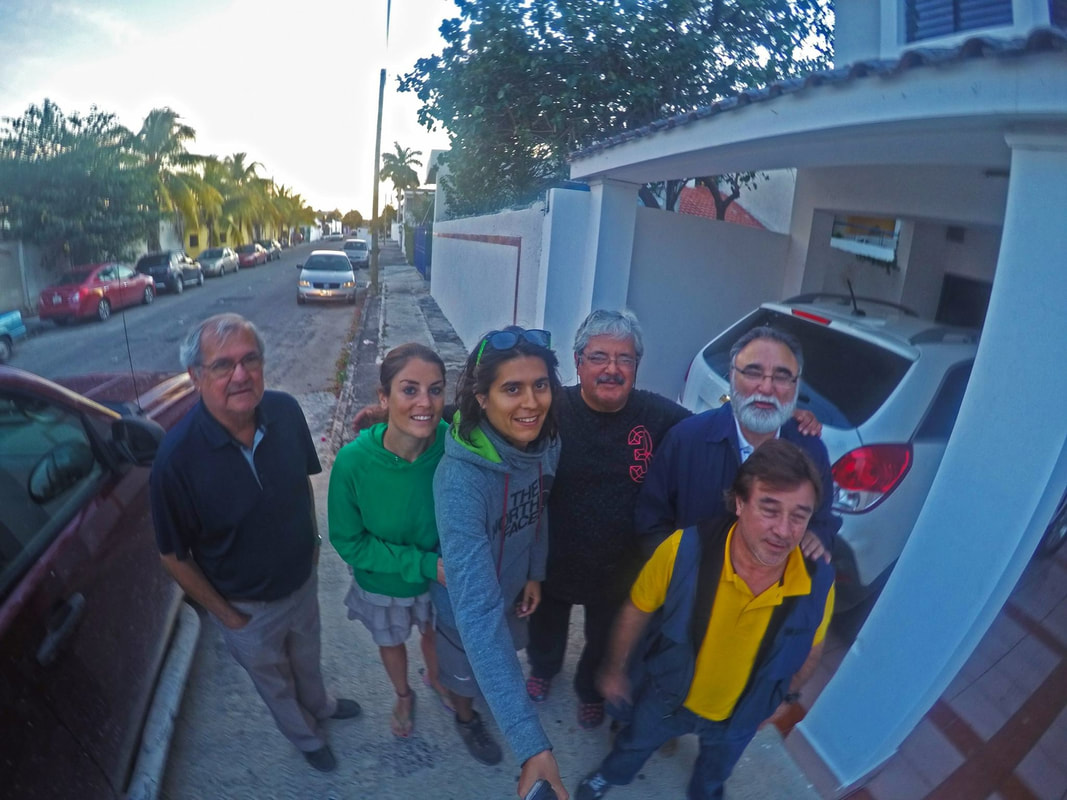 Jorge is a Couchsurfer pur sang. Not only is he the main organizer of local CS events, he continuously hosts a great number of travelers from all over the world in a place where he doesn’t even live himself: a little private house attached to the bigger house where he grew up in with his family, now only accommodating his old granny. I dropped my stuff off and together with him and another Colombian guest I drove down to a gigantic complex built for only one thing: the yearly event of Carnaval. 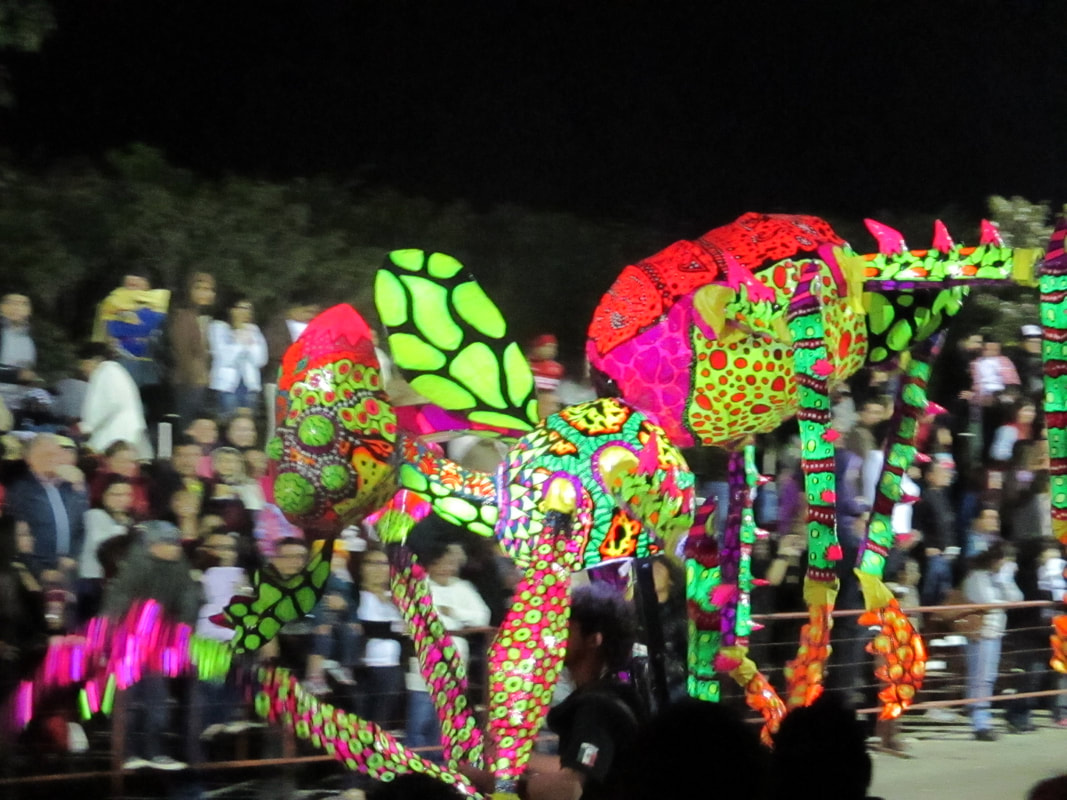 ​I admire the dedication to an event that is so dear to me. We just arrived in time to join the crowds getting pumped up for the traditional parade that was scheduled for that night. Nice and all to assign the title ‘traditional’ to this happening, but in reality it’s one big succession celebrating sex and greed.  A whole can of hot women was opened for the occasion. 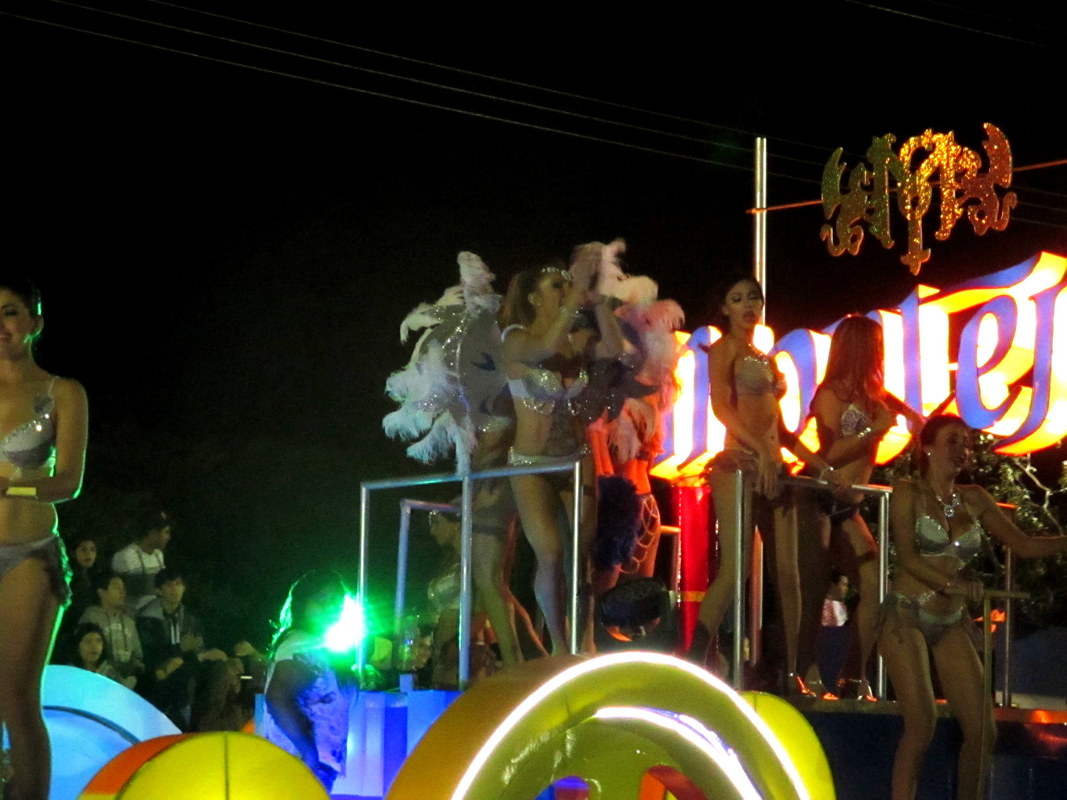 They had scraped everything fit, skinny and female together from every corner of Mexico to expose it on top of a wagon without any noteworthy piece of covering clothing, applauded by the remaining 98% of the overweight population.

They also had made an effort to empty all local gyms to have some oily Chippendale-muscle-men shaking their tushies to please the female and gay spectators. Lovely tradition, I'm sold.

Another activity that seemed to be widely accepted is throwing food and shit you don’t need off the wagons, bringing the audience into a mood that can only be described as hysterically, violently selfish. If I would have read in the newspapers the day after that someone had been flogged to death in the quest of a free plastic coca cola cup, I wouldn’t have been surprised.
At first we laughed about it, but greed is contagious, spreading like a virus. Before I knew it I found myself making athletic jumps and risky nose dives just to get myself a mini-bag of biscuits, while meanwhile witnessing Jorge making sprints I didn’t know he could squeeze out of those skinny legs of his. Mankind can be truly pure and beautiful sometimes, don’t you think?
​The day that followed I opted for a more artistic outlet of human thinking. Mérida is praised for its high quantity of museums that are mostly free to enter (bonus!), so why not consume those delights of creativity? It was still Carnaval though, so besides mezcal and tequila there wasn’t much to consume. The only place accepting visitors was Museo Casa De Montejo, the former colonial house of the Spanish conqueror that had established the city of Mérida. And before you are going to be all intellectual and sentimental about the beautiful historical value of this classic hero, let me get it straight for you: Montejo was a dick. Mexico was Mayan territory, not Spanish… In case you forgot: Spain is 9020km east. For some reason the Spanish didn’t see this as a reason to not claim this land they had never been before, destroy all existing culture and why not, kill and rape its people while at it: Viva España! 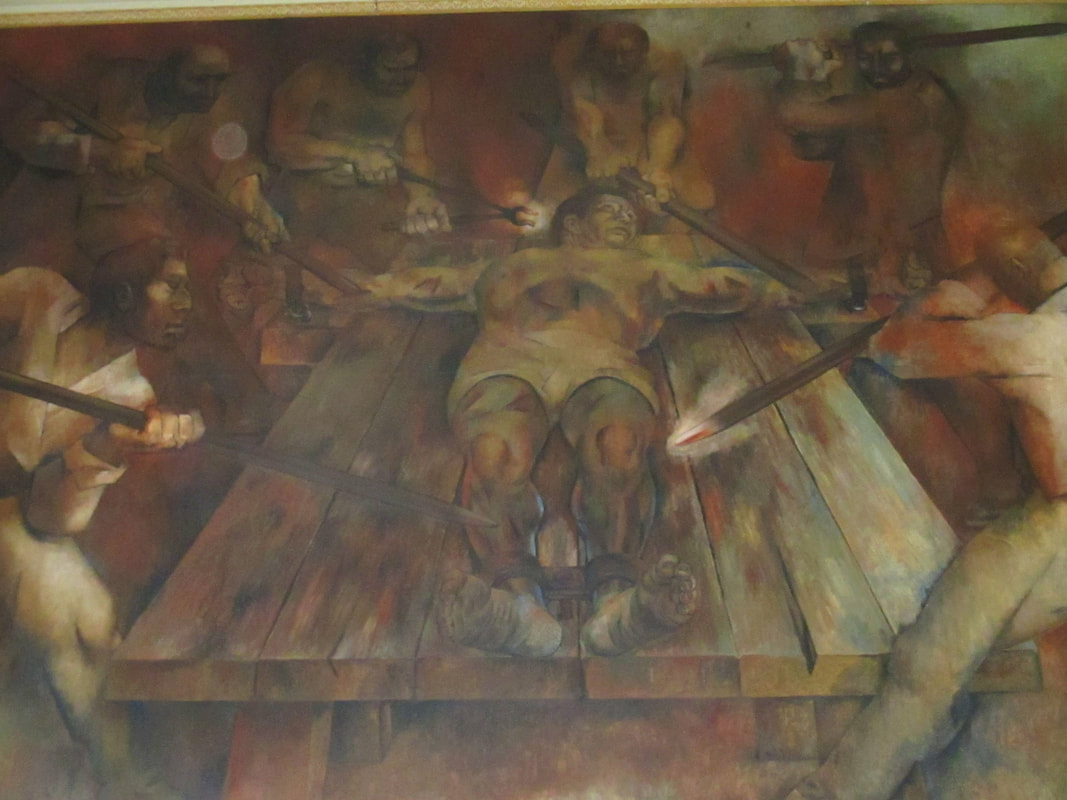 ​After 20 years of Mayan resistance (go Mayas!) Montejo finally got to the point of having murdered enough of them to weaken the opposition. Maya pyramids were brought down to the ground and their brick used for churches, the previous local religion was violently banned: Jesus loves you, but if you don’t love him back you will die. Mérida was turned into a duplicate of any average Spanish town, Montejo getting the fanciest mansion. Not agreeing with that? Alright, in front of Montejo’s house there’s a dedicated spot to slay and burn his opponents alive, your choice. So yes, a true local hero with his own museum, streets and even a beer brand named after him, seems fair.
​The day after I had more luck at the museum front. I kicked off with the MACAY, the modern art museum, which could be qualified as a place for the enthusiasts. I am. I do realize you have to have some mental issues to appreciate the beauty of a forest made of plastic garbage bags, but I think it was enchanting.
The Museo de la Ciudad then, a quick walk through Mérida’s entire history. I just provided you with a quick recap of the ‘glorious’ arrival of the Spanish criminals, which is only a part of the past, but a defining one. It’s intriguing to see how single events change the entire course of history, from ‘henequen’ to farming transitions. The museum walks you through the development of local cultural expression, which I mainly found in music and art, not so much in theatre. Even though the town has four, the programming is limited, which is rather disappointing. 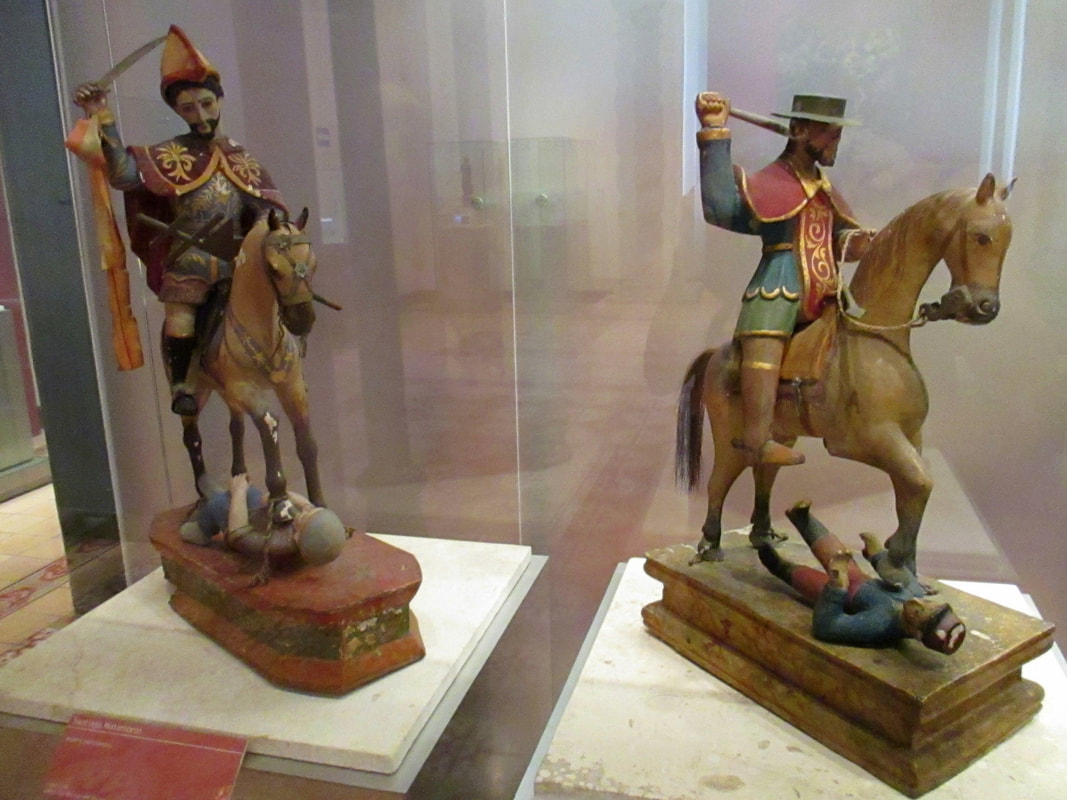 ​To get your daily shot of creativity, better try the Museo de Arte Popular which underlines the clear evidence of talent to be found in Yucatan. Excellent pieces can be found here, especially the wood-carving section with its admirable details blew me away. Exuberance doesn’t harm, seems to be the mantra here. After I checked off all the free museums I started the gallery trail: Galleria Tataya, La Eskalara, The Harris Building and Nahualli Casa De Los Artistas: Check, check, check and check. Art is so fulfilling.
Mérida has way more to offer: cenotes in its surroundings, beaches within a few hour’s reach, archaeological sites and colourful surrounding villages. I opted for one called Izamal.
​
This place for sure doesn’t lack marketing: a strong tourism board proudly allocated no less than four different slogans to this tiny town: “City of three cultures” – “Magical town of Mexico” – “Continuity of Maya life in a historic city” and “Ciudad Amarilla”. The last one is the most honest one: literally everything is yellow in this place (yes, I even tracked down a lost Chinese tourist). That’s good, I like yellow. I would for sure travel 1,5 hour each way to see yellow. 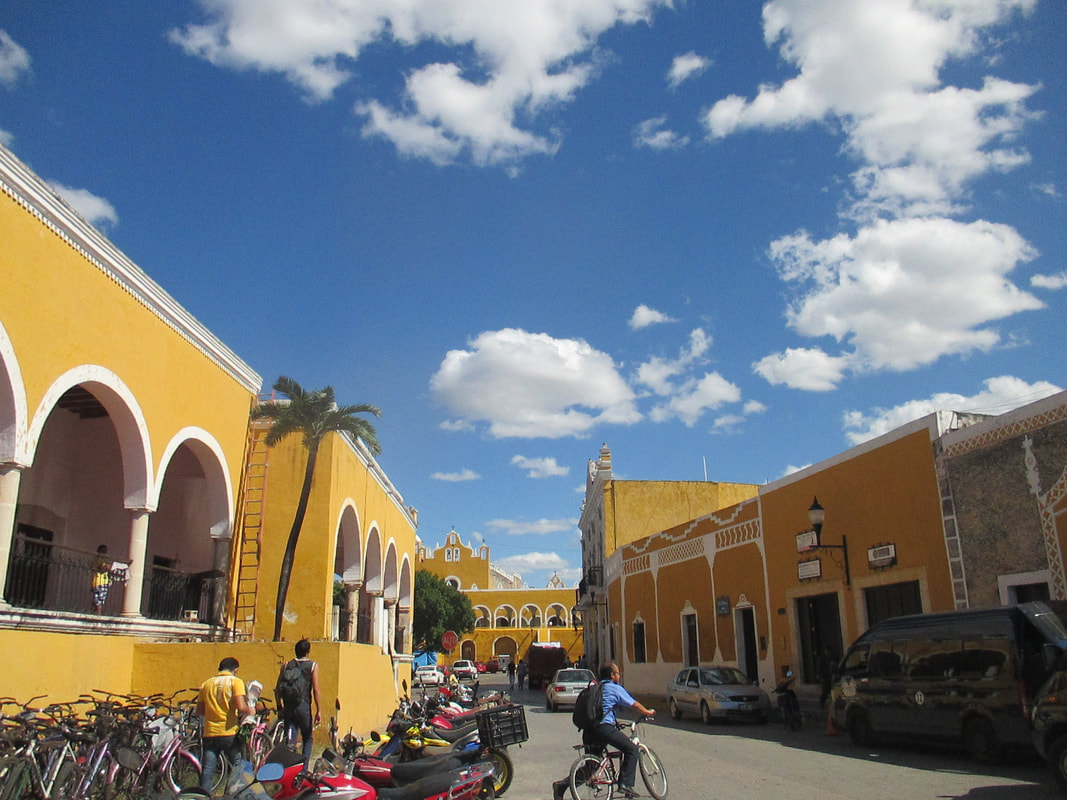 ​Once out of the bus terminal I got immediately drawn to the central San Antonio de Padua Convent, a place the Franciscan missionaries stole from the Mayas, on their own land. The place was once the main ceremonial center (Itzamná), but the love of God destroyed it all. Every piece of it was demolished and its stones were used to make the yellow catholic structure I was now standing on. The city board prides itself for having the world’s second largest enclosed atrium, after Rome’s San Pietro. Honestly, to even call this place in the same breath with Italy’s masterpiece is a bit of an insult. It looks really nice, fair enough, but to claim it has anything to do with St. Peter’s splendour would be a (sarcastic) joke. 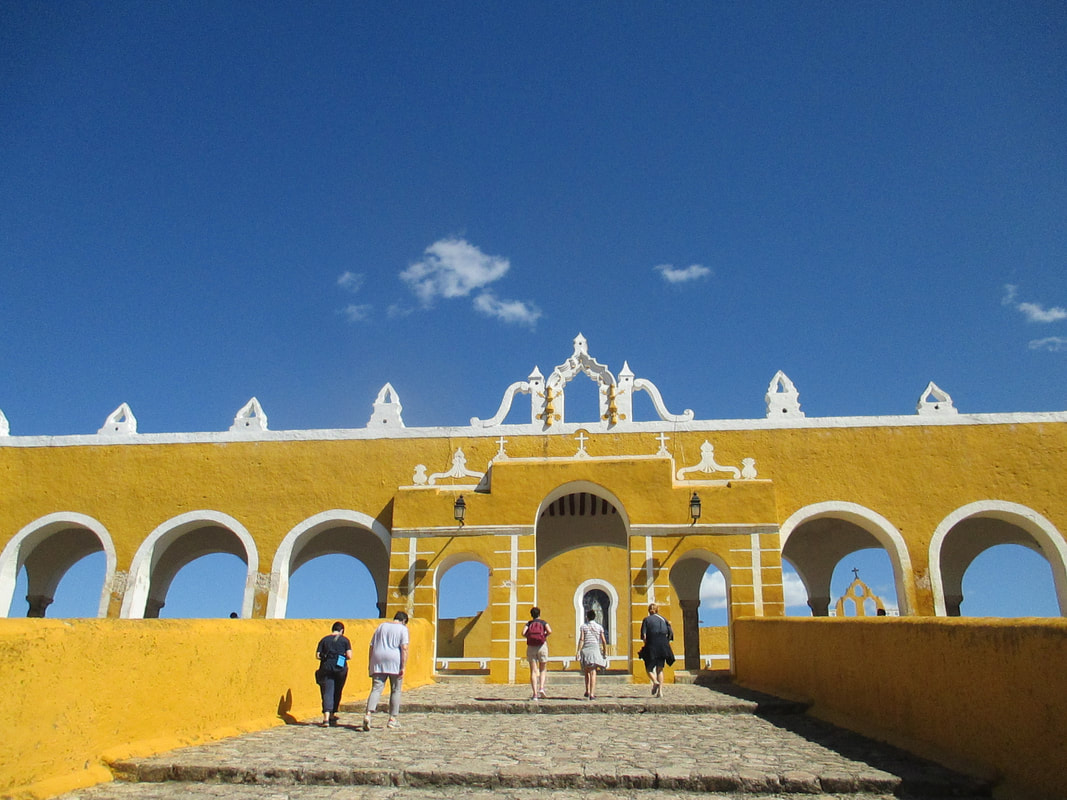 I glanced at the city map I just scored and traced down a ‘pyramid route’ right in the centre. Interesting… while walking along the planned out route I encountered a handful of pyramids built right in between housing lanes. The loyal Christians were kind enough to keep some (true) historical heritage standing but simply built their city around it. The most impressive one, if only for its size, must be the Kinick Kakma, resurrected for the sun god. Apparently there’s an easy accessible entrance in the front to climb it, but I unknowingly made it a bit more adventurous for myself than necessary by climbing it by hand and feet from the side. The pyramid in itself is worth the visit, but the view is truly priceless (as is the entrance fee: none).
I concluded my day and stay in Yucatán with a local specialty: Papadzules. Out of nothing it banged to #1 on my Mexican street food hitlist. Tortillas with hard-boiled eggs (pre-vegan era) and a green pumpkin-seed-sauce. No meat, no deep-fry: It’s an undeniable miracle.

Back to Mérida, I had a 20+ hours bus to take to Oaxaca after all. Or so I thought. What I didn’t know is that both I forgot to pay attention to clock-reading in primary school and my expensive, safe tourist-bus was long gone… Preparing me for my biggest adventure in Mexico....

You can read all about that in the Oaxaca blog! 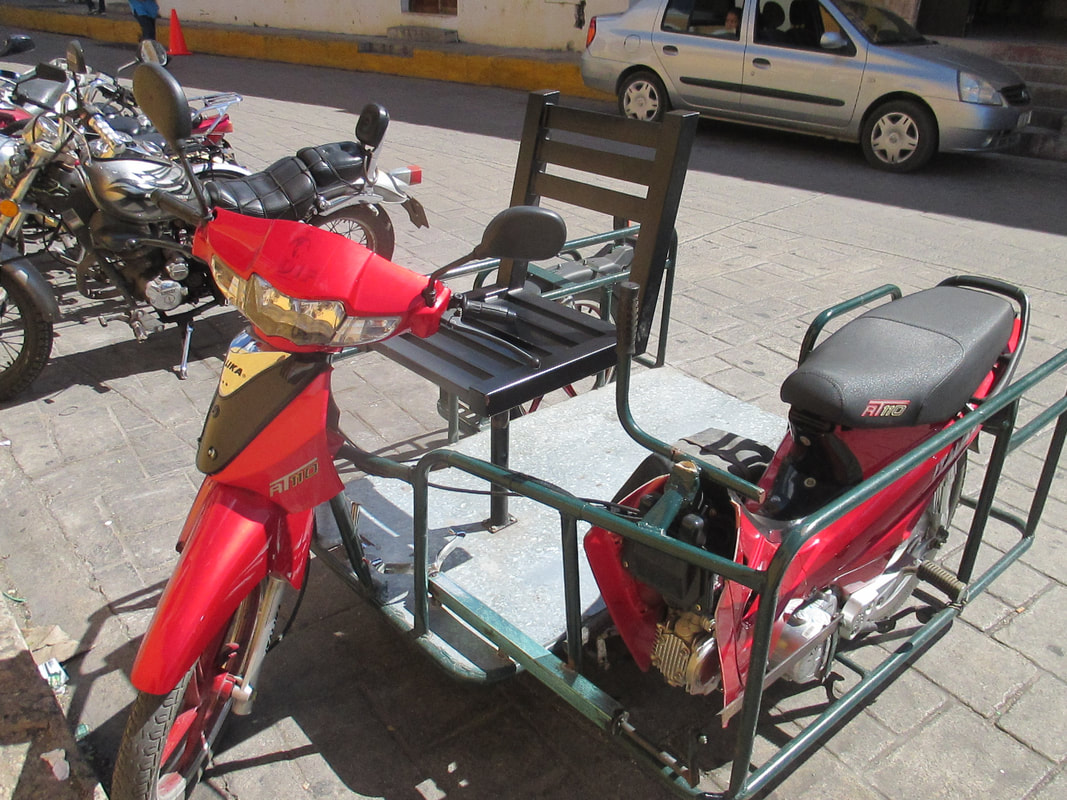 In the category "I would like to own a car, but I can only afford a motorbike."