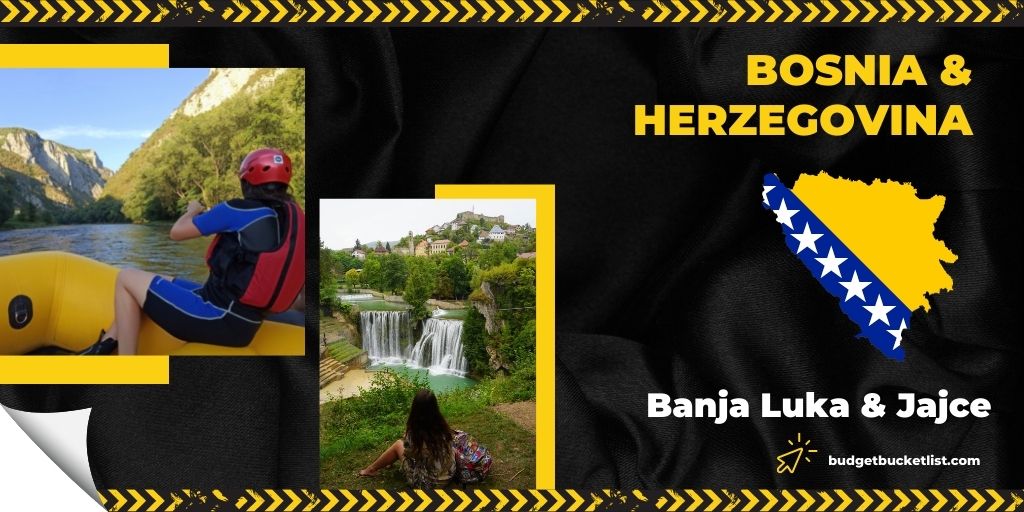 The first impression of a country always hits the hardest. Especially when it comes to Bosnia and Herzegovina, a land swathed with heartfelt tales of recent history. Maybe therefore it was a good thing we arrived in Banja Luka first, to be gently buttered up for the more intense experiences awaiting us. Banja Luka is a feel-good town. Comfortable, unpretentious and surprisingly modern. There isn’t much going on besides life itself and allowing yourself half a day to stroll around, admire the Tvrđava castle ruins (free), bathe in the Vrućica Srpske Toplice hot springs (also free) and visit a museum or two, is a generous enough timeframe to obtain an overall impression (that said, I stayed 5 full days). It’s the positioning among a handful of northern natural treasures that truly demand the stopover.
Bosnia and Herzegovina contains a total of 4 national parks, of which 2 are located in the north. Kozara National Park is a 1-hour drive away* from Banja Luka and allows for a wonderful mountain vis-à-vis characterized by numerous notable peaks (Gola Planina, 876m; Rudine, 750m; Jarcevica, 740m; Vrnovacka Glava, 719m) as well as a conglomeration of the country’s most prominent rivers (Una; Sava; Sana; Vrbas). As a former Nazi-occupied area, this park isn’t just a no-frills go-to spot for laidback hiking- and biking adventures, but also a more serious historical memorial site dedicated to former heroes who lost their lives by acts of powerful resistance. Alternatively, the more recently established Una National Park is a tad farther away, towards the Croatian border and their famous Plitvice National Park, but forms the biggest one of the country. The most conspicuous sights are the Martin Brod and Štrbački Buk Waterfalls and the white-water rapids enabling excellent kayaking and rafting experiences. Wildlife enthusiasts can keep an eye out for lynxes, foxes, chamoises and even bears!
​
* As everywhere else in the Balkan area, public transport demands time, patience and compromises (as many places simply can’t be reached without a car)… especially in low season. Unfortunately there aren’t any buses going from Banja Luka to Kozara National Park. You can however take a bus to Kozarac, and take a taxi or hitchhike from there to Mrakovica (12km) to enter the National Park. Una National Park requires a day of traveling: You’ll have to take a bus to the town of Bihać, from where you can take a direct bus to Martin Brod. Alternatively: From Bihac ‘Bedem’ (not the bus station) you can take a local bus to Kulen Vakuf and ask the driver to drop you off at Ćukovi. From there it’s a 4.5 km walk to get to Štrbački Buk. By the way: Banja Luka doesn’t appear on Google Maps, but an overview of the city bus line routes can be found here. 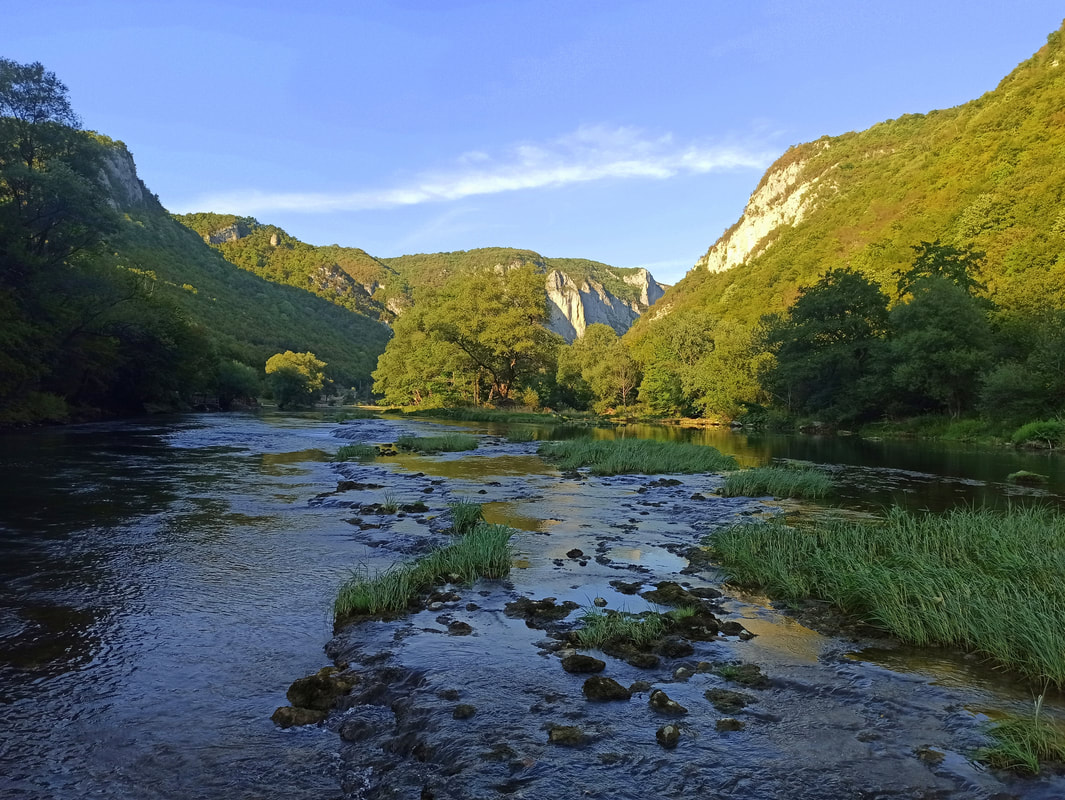 Not having a car and traveling in low season took away my motivation to reach out to these national parks… but luckily, I didn’t necessarily have to! The majestic Vrbas River lingers through the country 250km-wide and the city of Banja Luka is situated right on its banks. Simply knowing that the IRF Euro Rafting Championships were organized on its rapids for 3 years and counting, already gives away a hint of the adventures to indulge in. I consider myself lucky to have elected Rafting Klub Extreme to cater for this memorable experience. Our chatty guide Zuba combined professionalism and a keen eye for safety with untamed enthusiasm flooding out of a deep and genuine passion for this outdoor sport. Zuba breathes rafting. I would too if I had this divine scenery as my home base. It truly is a surreal feeling: Fiercely rowing with burning arms, drifting on both the swift streams and pure adrenaline, to look up and see an eagle fly ahead of the bright yellow raft leading the way. A brief moment of time when sounds shortly fade away and your mind makes a mental photo. Then you wink and get back to reality, witnessing the bird gloriously glides up into the heights of this dramatic gorge, cutting this breath-taking part of earth wide open.

* Spring is the best season for rafting, but Rafting Klub Extreme also operates in summer and autumn and makes it work with extra activities such as body rafting, bride jumping, a natural jacuzzi and a special surprise experience not offered by any other local rafting club.

​
I might not have experienced rafting in its high season, but I consider my timing spot on either way: While navigating the gushes of the Vrbas I could look up and observe the brave souls balancing over thin lines stretched out over the 300m-depths of the Tijesno Canyon. Once a year, Banja Luka attracts daredevils from all over Europe when hosting the Drill & Chill Festival focused on highlining and climbing. This 10-day event results in an intimate mountain gathering attracting a niche of like-minded spirits, alternating their adrenaline-loaded activities with meditation, juggling and aerial silk workshops. Properly hippie indeed: Grow yourself a man-bun and some balls of steel, and get your ass over to Banja Luka when the calendar hits September!
Jajce

Yes, from Banja Luka you can go straight to the next stop on the national tourist trail: The overloaded tourist hotspot Mostar or the dynamic capital Sarajevo… However, before you do so: I suggest you allow a day or two in Jajce, 70km down south, which turned out to be one of my absolute highlights of Bosnia and Herzegovina. The feeling is hard to fathom… As a child I had a habit of binge-watching Mary Poppins, franticly rewinding the VHS-tape back to the scenes in which she jumps into different chalk paintings and merrily wanders through these heavenly imaginary sceneries. This is exactly what walking through Jajce feels like. As if you’re suddenly sucked into an actual postcard. Photoshopped, to good to be real. Stupefied you gaze around at this Garden of Eden literally built upon an endless sequence of fairytale-waterfalls, an actual castle towering above the burrow with a flag fiercely blowing in the wind. Come on, nothing can be this pretty, how can other destinations even compete? 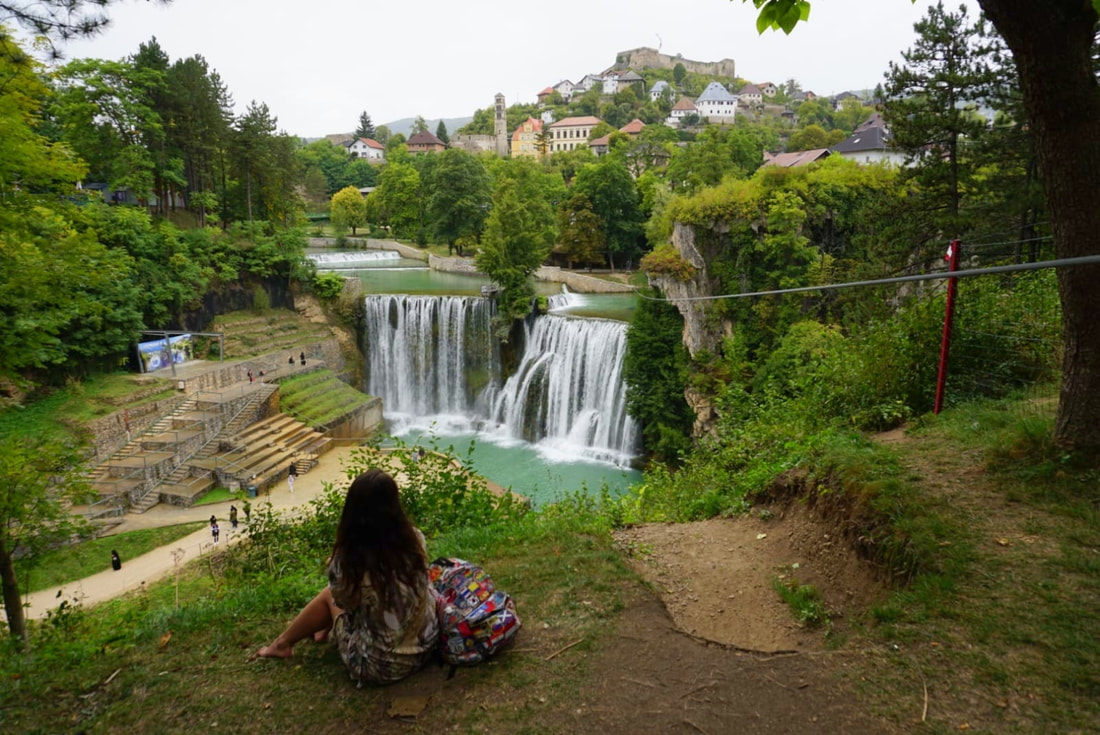 This is what I mean. Jajce, are you f*cking kidding me?


Besides just living your very own “Once Upon A Time”, make sure you hike out to the photo-friendly wooden water mills (from when Bosnia was still part of the Austro-Hungarian Empire) and visit the Fortress as well as the AVNOJ* Museum. The restaurant Konoba Slapovi is an obligated stop for consuming a reasonably priced meal literally in between two clattering waterfalls – even for me a first and I’m at country #72.

During your inner-city strolls, notice the sudden blend of cultures and religions living side by side, close to the invisible border you just crossed from Republika Srpska to the Federation of Bosnia and Herzegovina: The Serbian Orthodox, Croatian Catholics and Bosniak Muslims… all leaving their mark in both architecture and social energy. Jajce has got it all.


* The Anti-Fascist Council for the National Liberation of Yugoslavia was the Communist council that organized a resistance movement against the fascist forces that occupied Bosnia and Herzegovina during the WWII. Their second meeting took place in this building in Jajce, where Tito laid the groundwork for his first communist government of Yugoslavia. An interesting spot with English information displays!
In order to support the travelers’ community, I spend many hours per week to adequately document all information and advices for prospective visitors, accompanied by a (hopefully) entertaining insight into my personal observations and experiences. This service is and will remain free. However, if you voluntarily want to make a contribution and support my travels and thus the creation of new stories and information supply, here is the button you’re looking for:
Donate
Related:
- 10 typical Dutch celebrations no traveller should miss out on
​- My favorite city in The Netherlands: Haarlem
​- 3 reasons why you need to visit Nijmegen [The Netherlands]
​​- Top-5 places to visit in South Limburg [The Netherlands]
- Darkness in the city: a metal festival in Leeuwarden, The Netherlands
- Citytripping in Denmark's capital: Copenhagen
​- Discover Romania's enjoyable cities: Bucharest, Brasov and Cluj Napoca
​​- The prettiest historical town in Romania: Sighisoara!
​​- History preserved: Time capsule of Romanian culture Maramures
- The 3 golden rules to travel Sofia on a budget! & Why you shouldn’t miss out on Plovdiv! [Bulgaria]
- Where modern meets classic: Vilnius, Lithuania
​- 8 ways to save money in Vienna, Austria
​​- German gems: Aachen & Frankfurt am Main
​- Europe's best skiing & hiking: Get your ass over to jaw-dropping Switzerland!
- A capital surrounded by scenic little villages: Lisbon, Portugal
​- Discover more Belgium: Antwerp & the most kick-ass Flanders itinerary!
​- Budget Bucket List hitchhike trip to... Kosovo!
​​​- Guest Blog 'Kosovo Girl Travels': Travel tips and stories from Kosovo's first and only travelblogger!
- Where city and nature meet: Edinburgh, Scotland
- Unravel the mysteries of Serbia
- Spanish citytrips: Barcelona, Malaga & Sevilla
- The modern delights of Frankfurt am Main, German
​​- Discover the splendours of Turkey: Istanbul on a Budget & Reasons to visit Edirne
​​- Diving into Malaysia's history: Melaka
​- Korean culture at its finest: Explore Gyeongju!