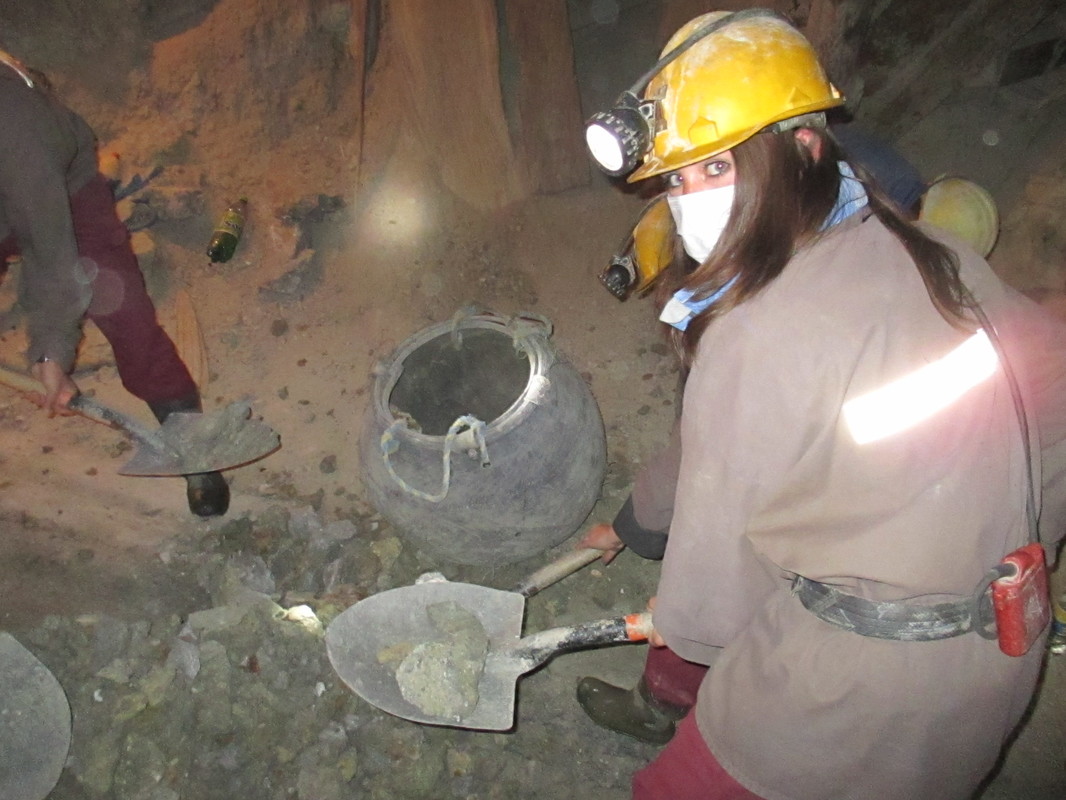 I dismissed Potosi on my way to Sucre, convinced that I had no business in this mining village. However, after the tenth passionate story about the tour through the silver mines I surrendered and took the bus back. Nauseous from the unhealthy enrollado I took in at the market, I suffered the rattling bumpy-bus to my new destination. Although in my experience Bolivian people are less open to foreigners than for example Argentineans or Chileans, at bus rides they are very eager to talk about their country and the surroundings. While being entertained by these chatty traditional-clothed cholitas I enjoyed the stunning montane landscape and witnessed the alarming poverty in the villages we passed.​ 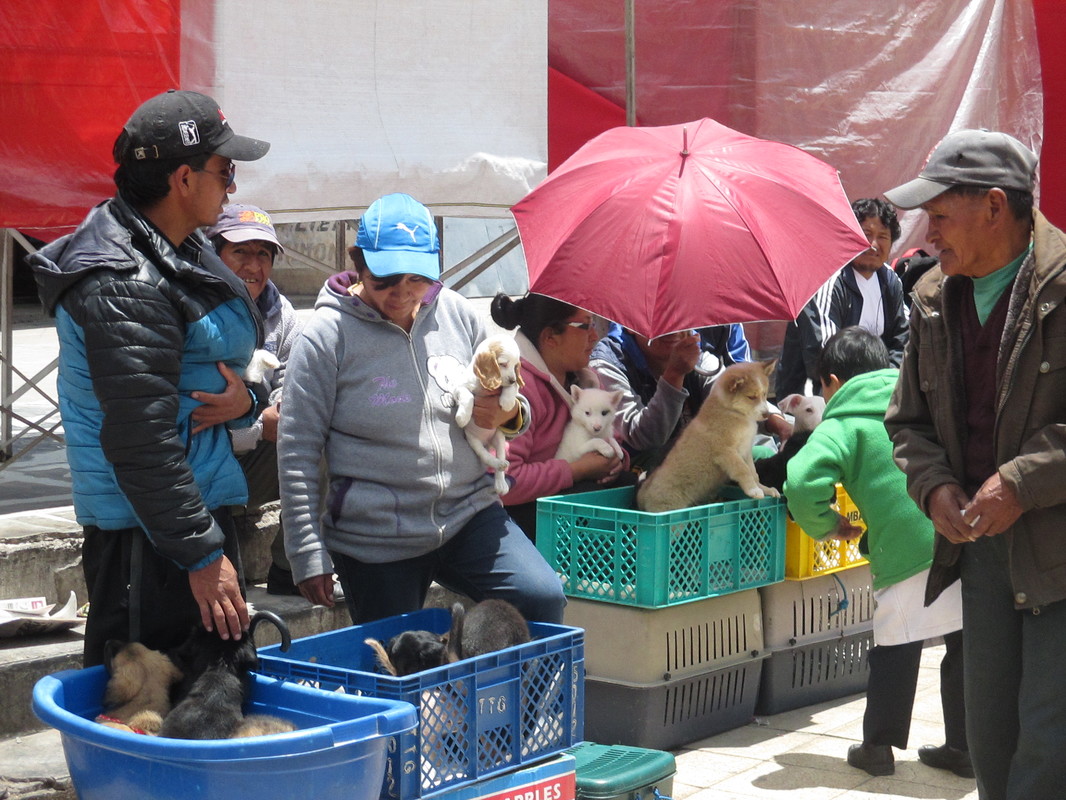 In the hostel, which had the highest population of French people outside of France, I ran into a lad I met before in Rosario (Argentina). Wearing at least 3 layers of clothing due to the high altitude, we moved to a street market and enjoyed a local dish with some api: a hot, sweet pink drink that tastes like Christmas. All of this less than €1,50. ​
After an early night I woke up and pretended I wasn’t Stephanie the backpacker anymore, but Stephanie the miner getting ready for work.

So I stashed a handful of coca leaves in my mouth and high-fived Fernando, the miner that would take me into his domain that day. My yoga-pants proofed to be unsuitable for the trip. Not only because the miners are in a serious lack of female proximity and this would be a tad too distracting during working hours, but also because it was going to get low and dirty. So equipped in an oversized jumpsuit, yellow helmet that read ‘about to die’, headlight and heavy boots we entered the wet mines, knee-high into the mud.​ 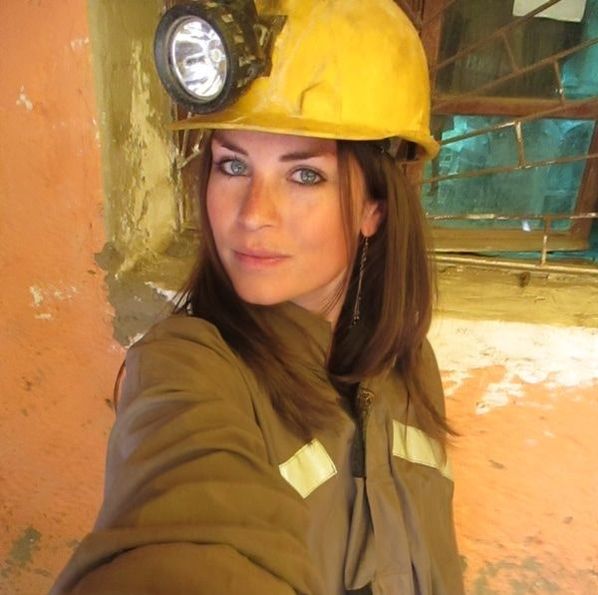 I wasn’t as though as the miners that pushed the heavy carts through the 1-meter high corridors, so I quickly put on a facemask to protect me from the intense dust. Walking around bend down I realized how useful my helmet was, as I bashed my head against the low-hanging rocks at least 3 times per minute. ​ 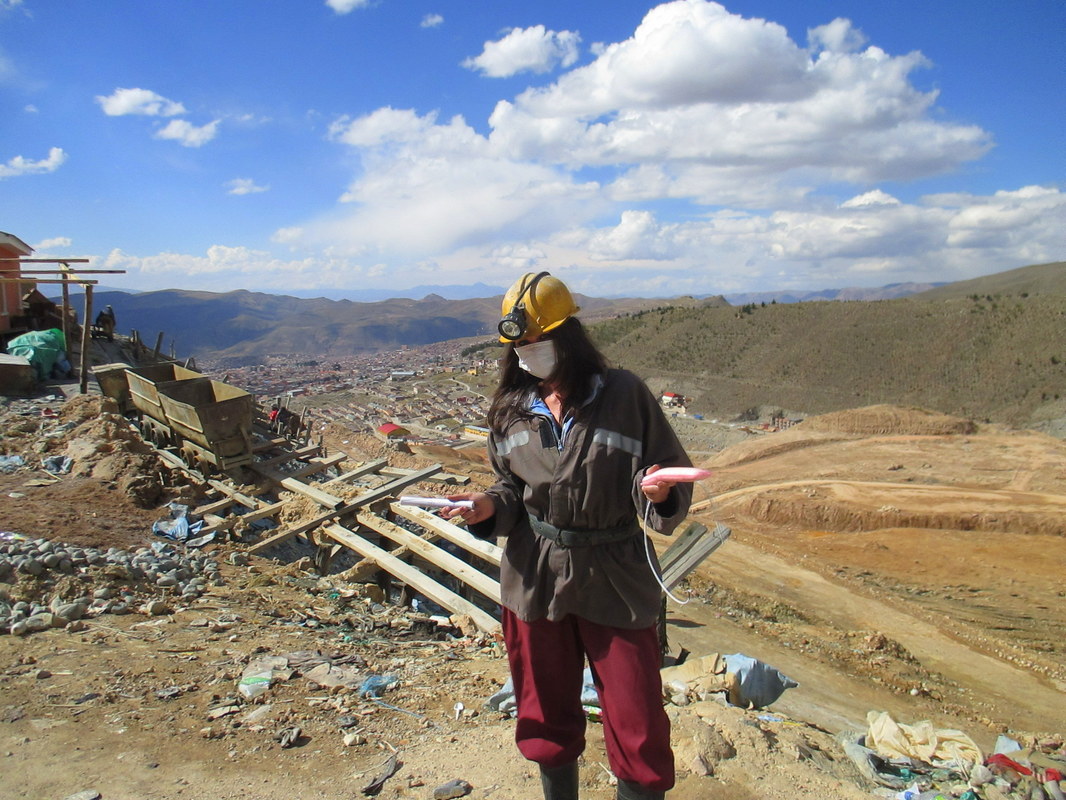 While trying to keep on walking despite the serious lack of oxygen, Fernando told me about the men working here, sometimes starting when they’re only 14 years old. Without any sunlight, oxygen and exposed to the dangerous substances in the air and the constant risk of collapse they work here over 10 hours a day, earning less per day than I do in 1 hour. The circumstances don’t allow them to get old, and usually they die at the age of 40-50. 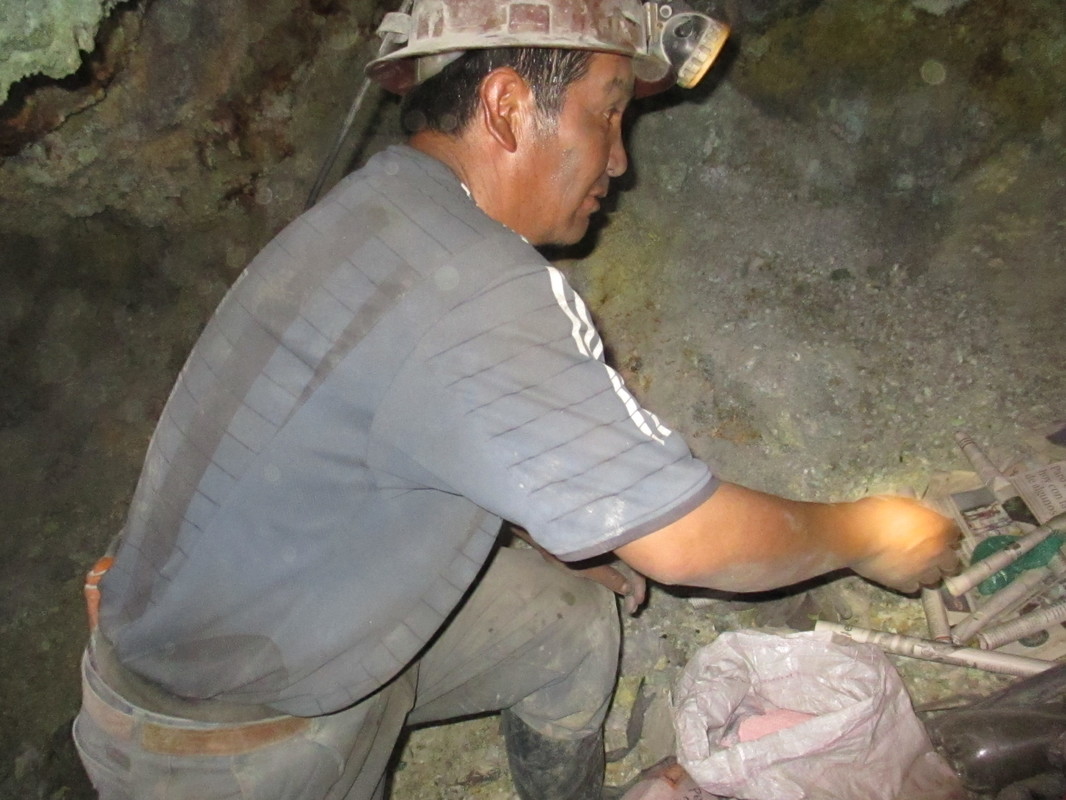 Why do they do it then? They have a family to look after, and the lack of education or any other form of social capital doesn’t give many other opportunities to make a living. This situation is poignant. And there's nothing you will change about that.

I wouldn’t describe this tour as great fun, but as a painful but interesting reality-check. 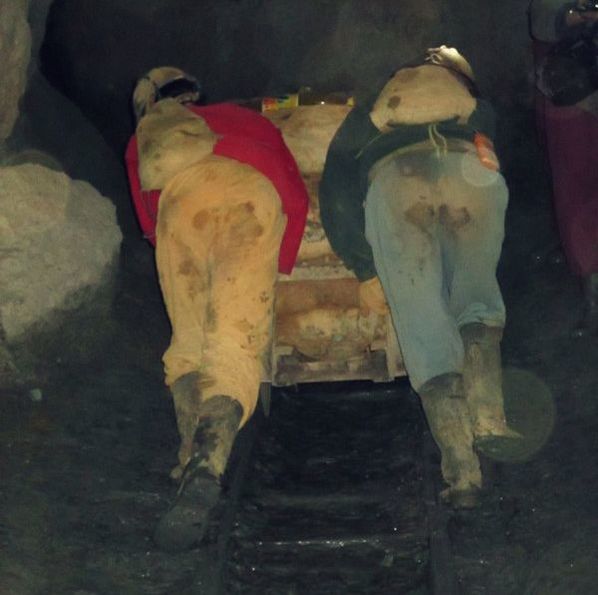 Upfront I signed a document stating that during this visit I would be exposed to the same risks as the miners… So I wasn’t restrained when I had to climb up a 20-meter hole in the rock, spiderman-style with my feet pressed to the sights and with no protection at all in case I would fall down. I was pouring sweat when I got up and almost couldn’t breathe in this fusty space, but I made it. 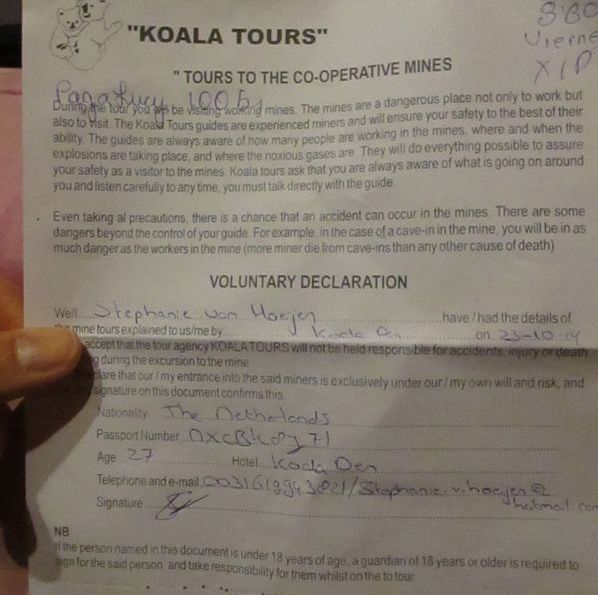 Time to shovel some silver rocks! Red-headed and mud-faced I strained all my muscles and ruined my back when I tried to fill the bucket with the heavy rocks. 1 bucket took me as much time as the miners needed for 4, but I thought I deserved a drink anyway. As I was advised to bring some gifts for the miners, I pulled their favorite alcoholic treat out of my pocket: a 97% alcohol liquid. Yup, 2 times as strong as absinthe, it’s like drinking gasoline.
All of the miners filled the cap of the bottle, after which they spilled a bit on the ground to honor Mother Earth (Pachamama) and ask her for their safety, and downed it like a glass of diet coke. Obviously I didn’t want to be left behind and joined the ritual. It felt like the liquid burnt its way out of my body and esophagus and left a gaping hole. Nauseous and instantly drunk I handed over the rest of my gifts: Soft drinks, coca leaves and some dynamite. The last gift came in handy as the group of miners was about to blow up some caves. Swift-handed they cooperated to firm the dynamite in between the rocks… lit it… and then… RUN! Oke, I said the tour was not about having fun. But man, did I enjoy these body-shaking explosions. Blowing up stuff is awesome!​ 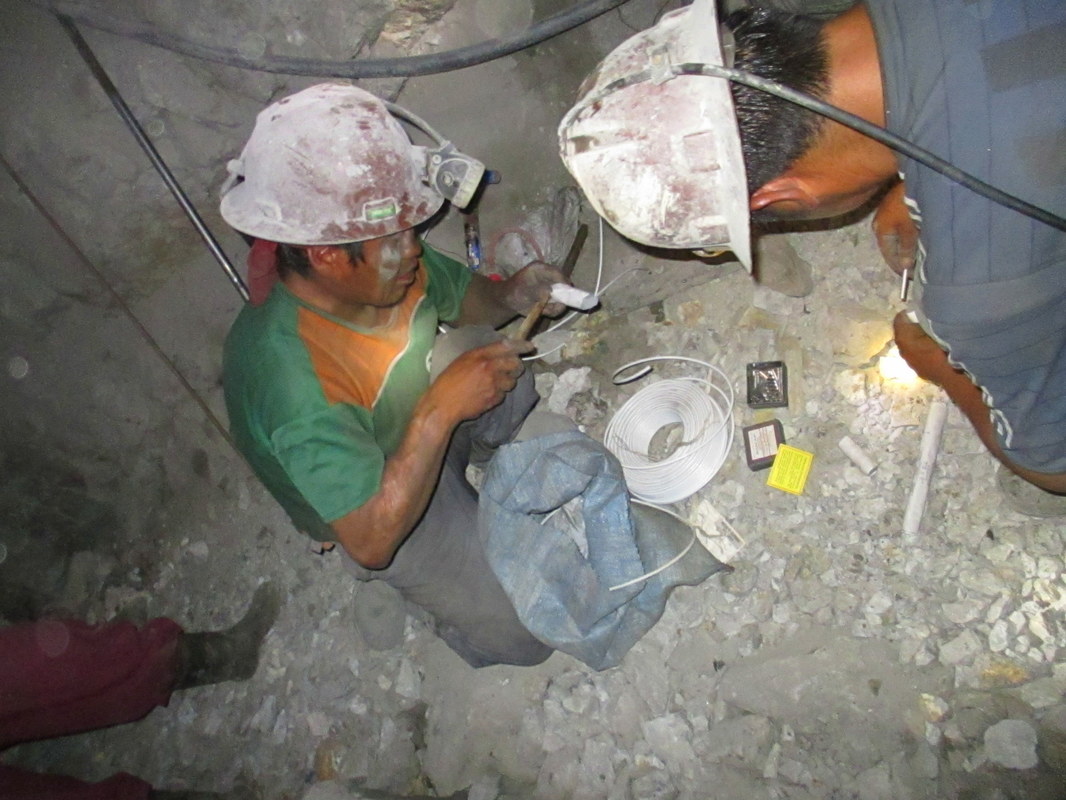 Glad I wasn’t claustrophobic we crawled our way out, descending in little holes that obviously weren’t made for either fat people or the faint-hearted. Mining: Not quite the Snow White And The Seven Dwarfs that shapes Potosí’s reality.​
In order to support the travelers’ community, I spend many hours per week to adequately document all information and advices for prospective visitors, accompanied by a (hopefully) entertaining insight into my personal observations and experiences. This service is and will remain free. However, if you voluntarily want to make a contribution and support my travels and thus the creation of new stories and information supply, here is the button you’re looking for:
Donate
Related:
- The mines of Ouro Preto, Brazil
- Go to the Bolivia Page for more blogs and hiking adventures!