Download File
An edited version of this post can be found on STEEMIT: Upvote me to support my travels for free!
​
“Move over Rio, there is a new carnaval in town!”, shouted the British Daily Mail header to me. Quite a strong statement, but it has to be based on something right? Maybe I should just travel down to this place called Encarnación and judge for myself…
​
… a boisterous carnaval celebration with glitters, feathers and oiled fit bodies isn’t the worst way to give some extra flavor to my travel itinerary anyway. 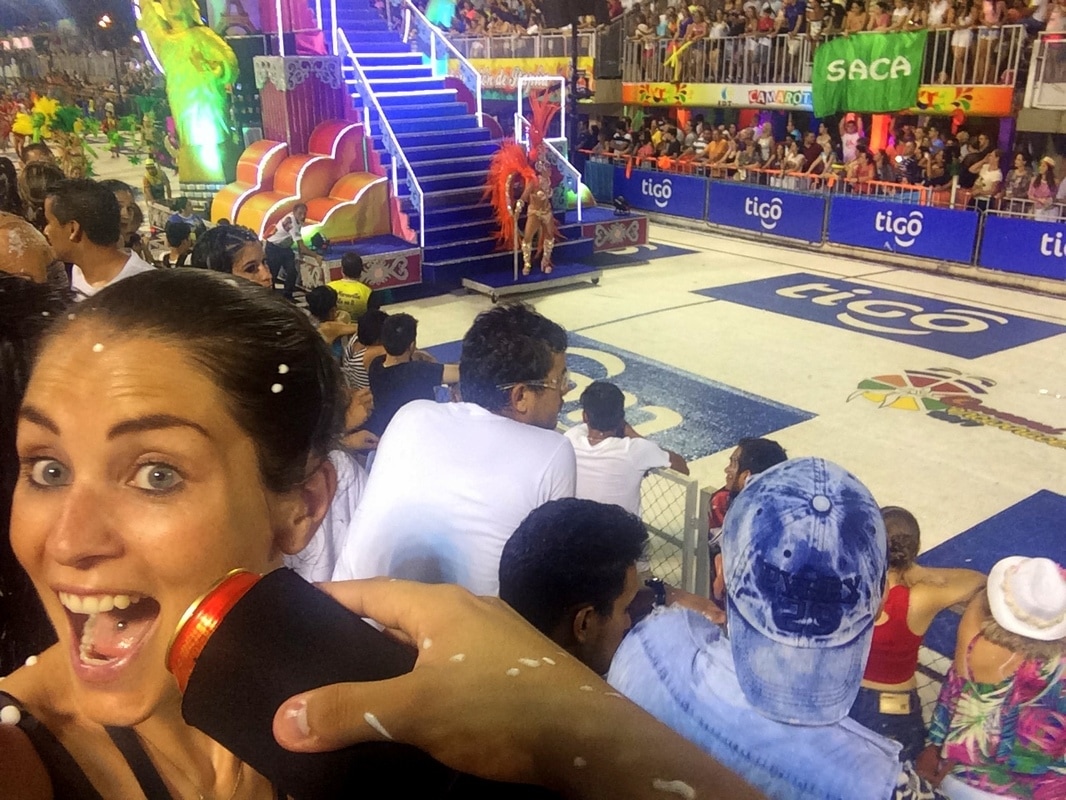 To add up to the adventure I obviously hit the hitchhike-path again, but this time I was traveling with some extra ballast. You see, when I had just arrived in the capital Asunción I still really liked my Couchsurfing host Nestor*. So when he told me it was his desire to witness the carnaval in his fatherland for the first time in his life but he just didn’t have the money, I had offered to pay the lion’s share of his entrance, as a friend. And unfortunately he didn’t forget about that, even though he did seem to have enough funds for his daily pack of nicotine and sixpack(s) of beer… and even though that friendship I thought we had was more interpreted by him as if-I-touch-her-often-enough-and-tell-something-slimy-every-5-minutes-she-might-want-to-f*ck-me-after-all-despite-her-verbal-and-physical-rejections. 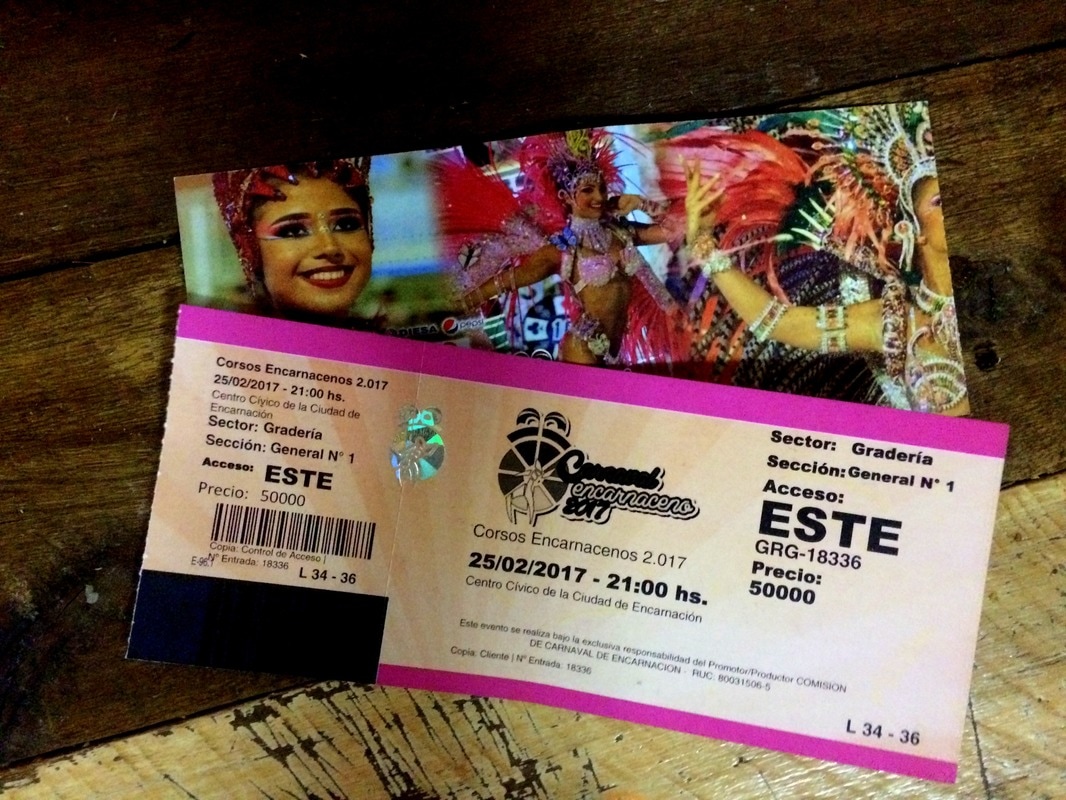 I should have split up with this man right there, but the situation was more complicated than that and the world, once again, too small. The Couchsurfer I contacted in Encarnación, far before I even met Nestor, and who had accepted my request to stay, happened to also be one of Nestor’s friends… which I found out last minute. 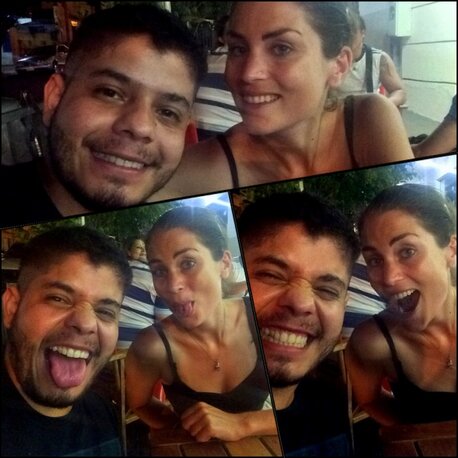 And very soon he would be MY friend too…. what a guy, this Iván!
​
So even if I would have grabbed my bag and disappeared out of Nestor’s life, he would be in it again a few hours later. So I decided to just deal with the situation as it was, make the best of it, ignore all seduction-attempts and don’t let one single desperate man rob me from my joy and entertainment I was planning to find in Encarnación. I’m stronger than that.
That meant hitchhiking took triple the time, as a man-woman-duo just isn’t perceived as equally interesting and trustworthy as a girl alone. Also because Nestor just waited in the shade with a cigarette dangling out of his mouth (while I stood there in the 43-degrees-swelter) until I would present all rides  on a fancy little silver plate to him (still complaining if he didn’t get the best seat in the car). But I did, 4 in total, which meant just before sunset we disappeared into the modern skyline of Encarnación, driving passed the well-kept sandy coastline bordering the Paraná River offering tranquilizing leisure opportunities to countless sun-kissed holidaymakers. 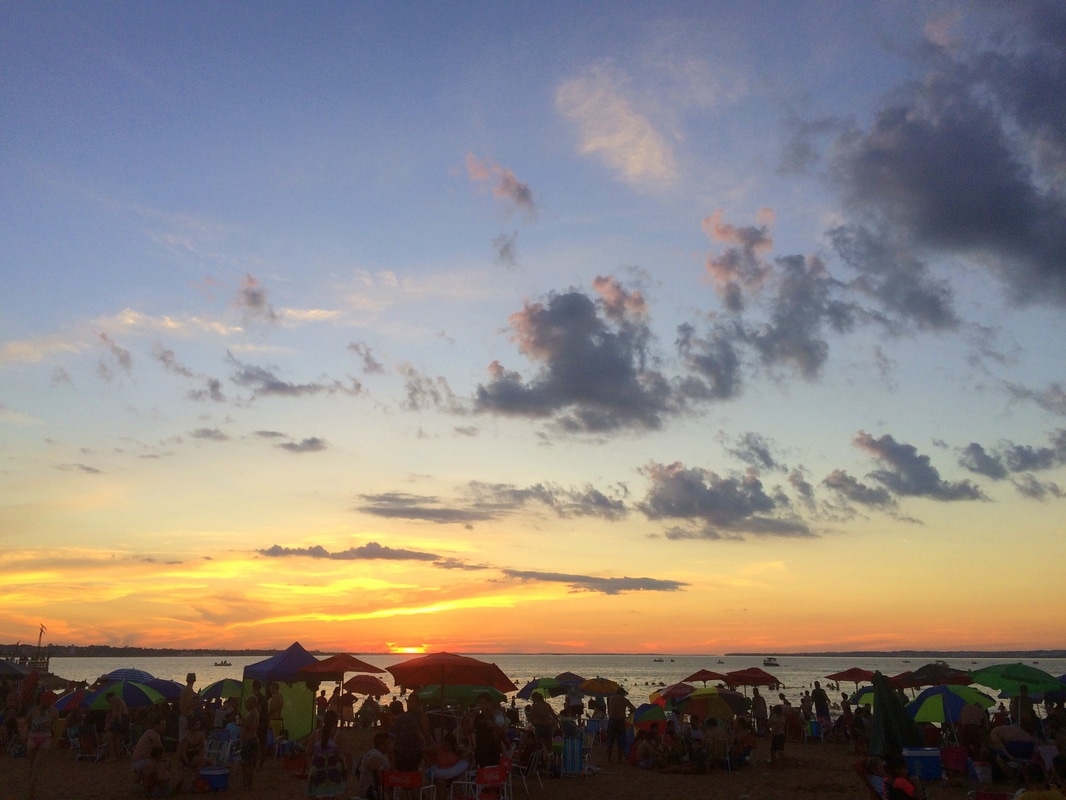 Holidaymakers that only recently, at around 6PM, came down there, as during daytime it’s basically unbearable to be outside a 2-meter-radius of an airconditioning in this fraction of the world. Let me explain it to you: You have planet Earth, you have our sun and then in between there’s some country independently floating in space which is Paraguay, almost touching the burning fires of our brightest star. Here, I mapped it out for you, this is an actual representation of the current situation of Paraguayan summer: 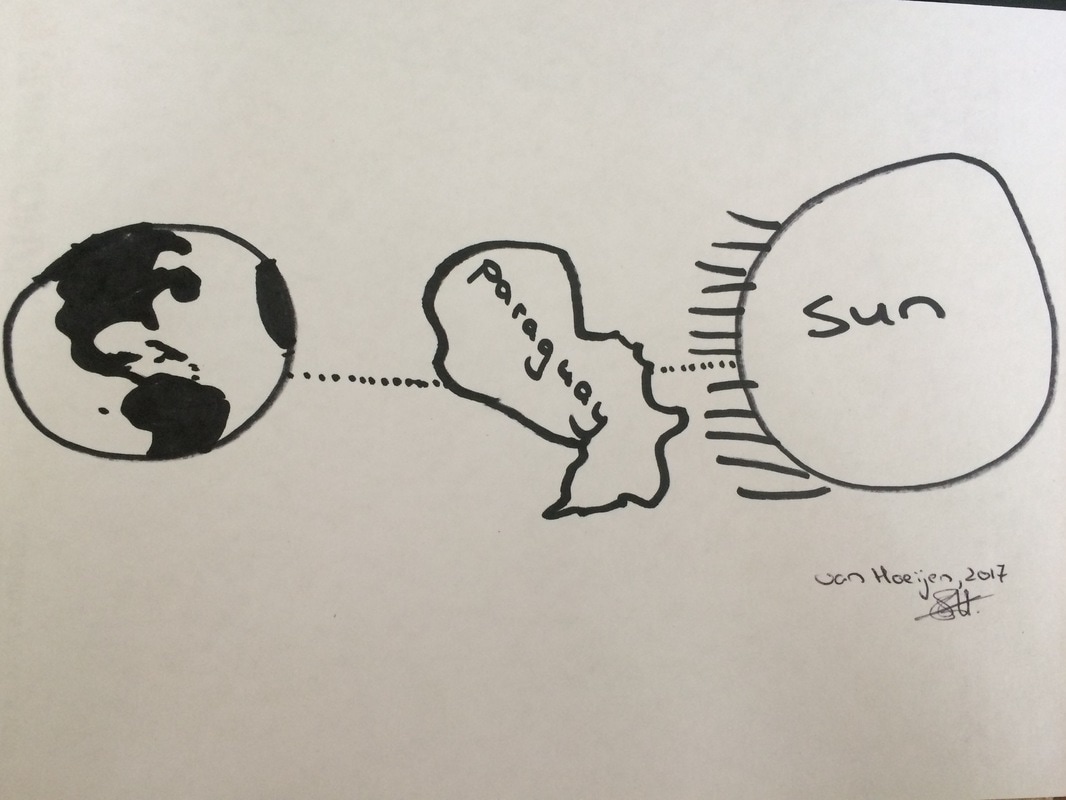 This incomprehensible heat, and also the apparent lack of any other cultural recreation opportunities like museums or theatres, complicates any sightseeing-ambitions a dynamic citizen-of-the-world-backpacker like me might have. This is not a place for exploration, this is a place to just sit back with alcoholic refreshment and chill around until the first club opens when it’s finally cooled down just enough to dance again. Therefore, the carnaval parade didn’t start until almost midnight, going on until the wee hours of the morning. 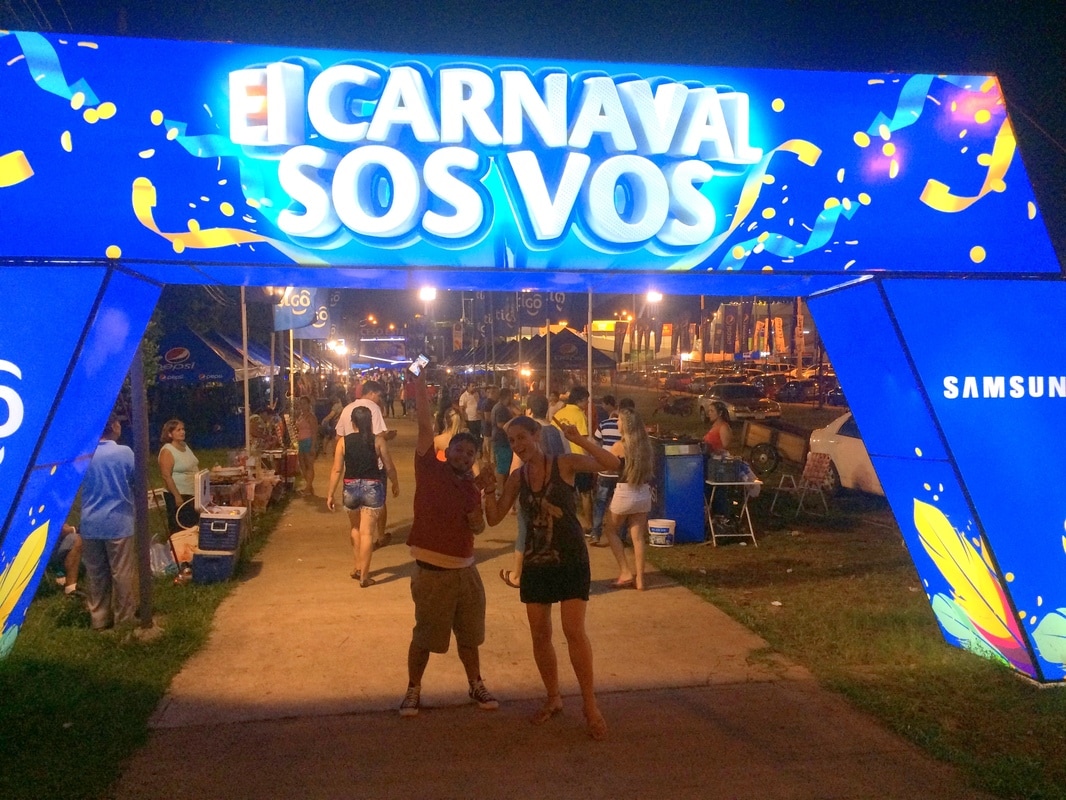 Well, at least I practiced a bit with that screwed up rhythm… I had followed my charming host Iván and his friends to the bars the night before... 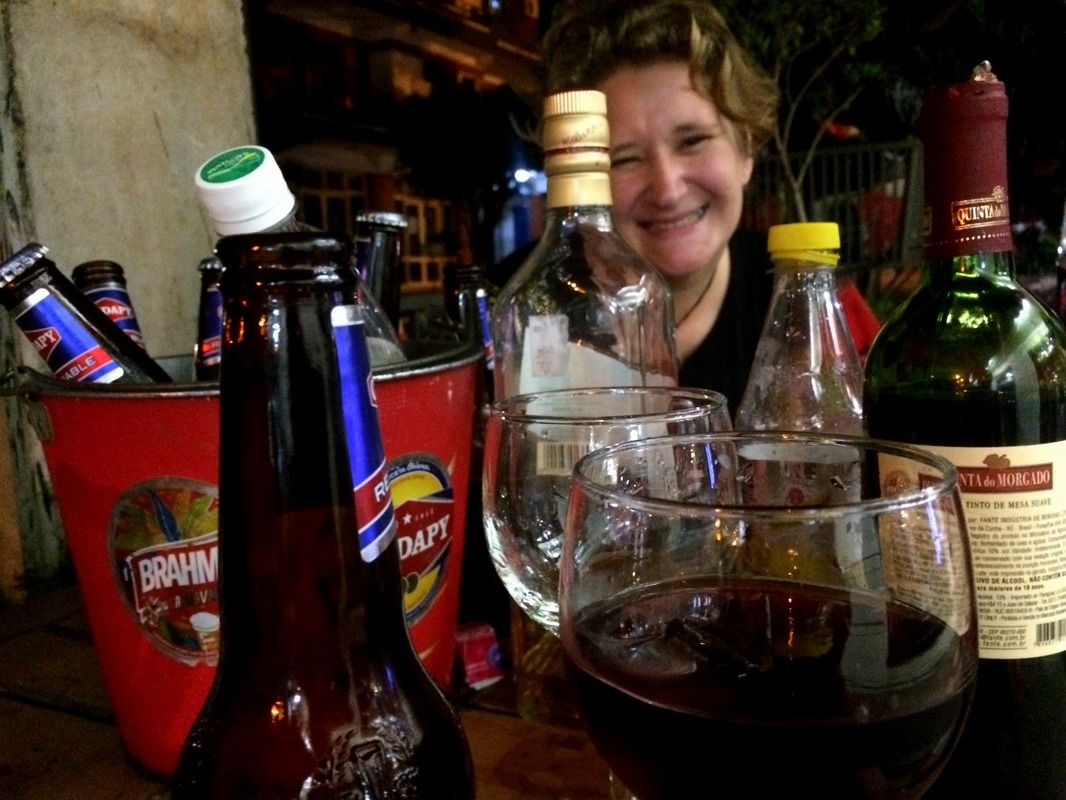 …to only return a few moments before sunrise, blending my night-rest with a never-ending siesta to sleep out the alcohol-induced-injury-time that comes with an age of 25+. I was a trained soldier. Pumped up with a bottle of really bad Brazilian wine we marched to the parade, the vapor of excitement steaming up from the stadium. I knew it, Iván knew it, his friends knew it… this was going to be good. Unforgettable memories trembled in the air.

The shouting swelled up the closer we got to the action. The chanting, screaming and laughter intensified, luring us to our short-term destination with a growing eagerness.

A moment of silence, a security check-up, the echo of footsteps into a hallway. 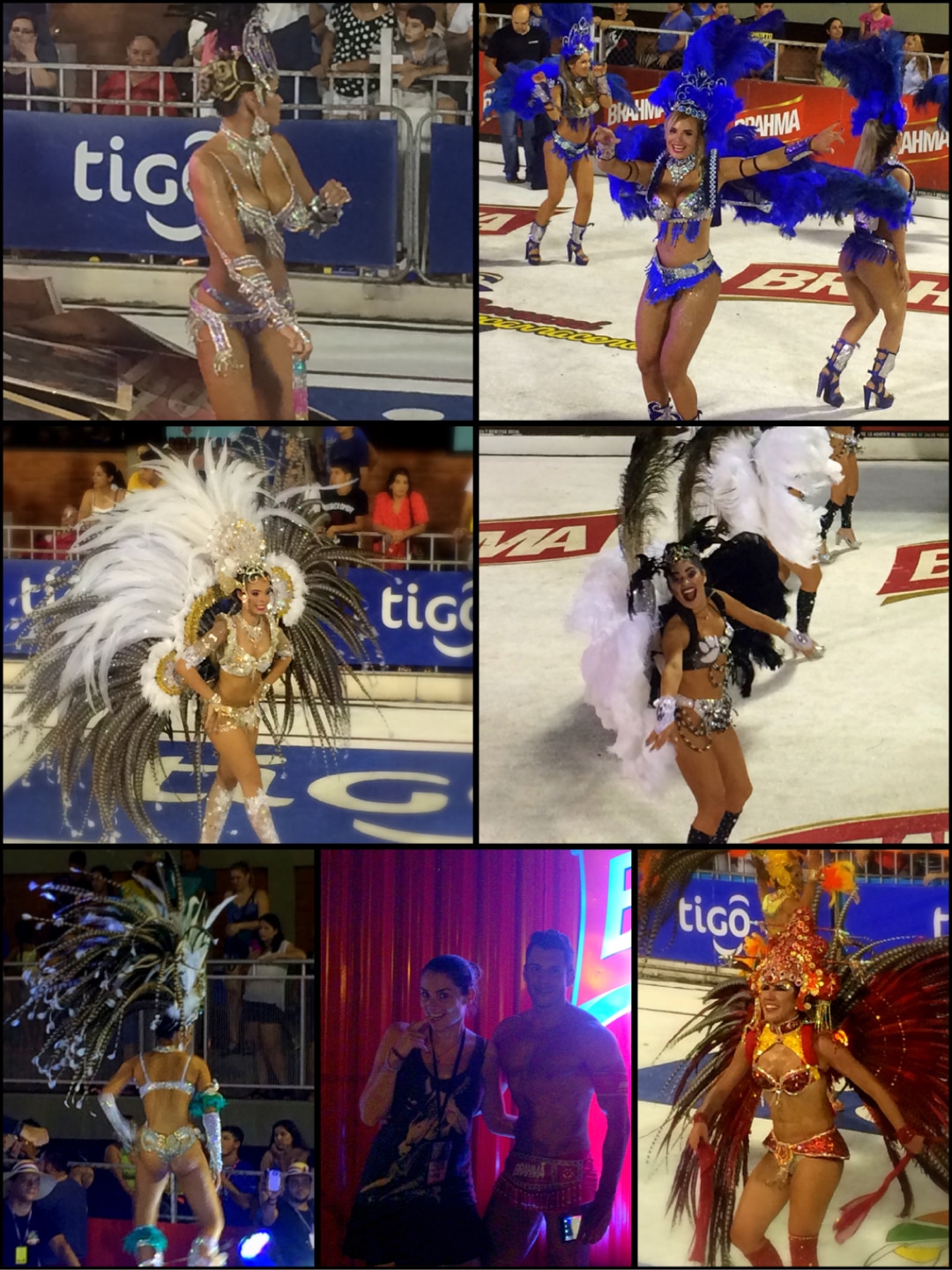 High spirits, shared merriness and faces of ecstatic excitement. Dancers showing every scrap of their talent and even more, legs moving faster than a heartbeat, flesh trembling inexhaustibly. A cellulite rate of absolute zero, voluptuous bodies shining in all their flawlessness. How is this even possible? Where are these perfect people hiding in daily life, where is that cave concealing all these physical human wonders
Nakedness wasn’t optional, only almost entirely exposed bodies can reveal the professionalism of the movements these artists are sharing with the public. They worked all year towards it, now it’s their supreme moment to shine. Literally, with glitters, oil and the sweat pouring out of their well-shaped torsos on the rhythm of the sounds rising up from the live bands, feverishly producing the beats the audience is craving for. 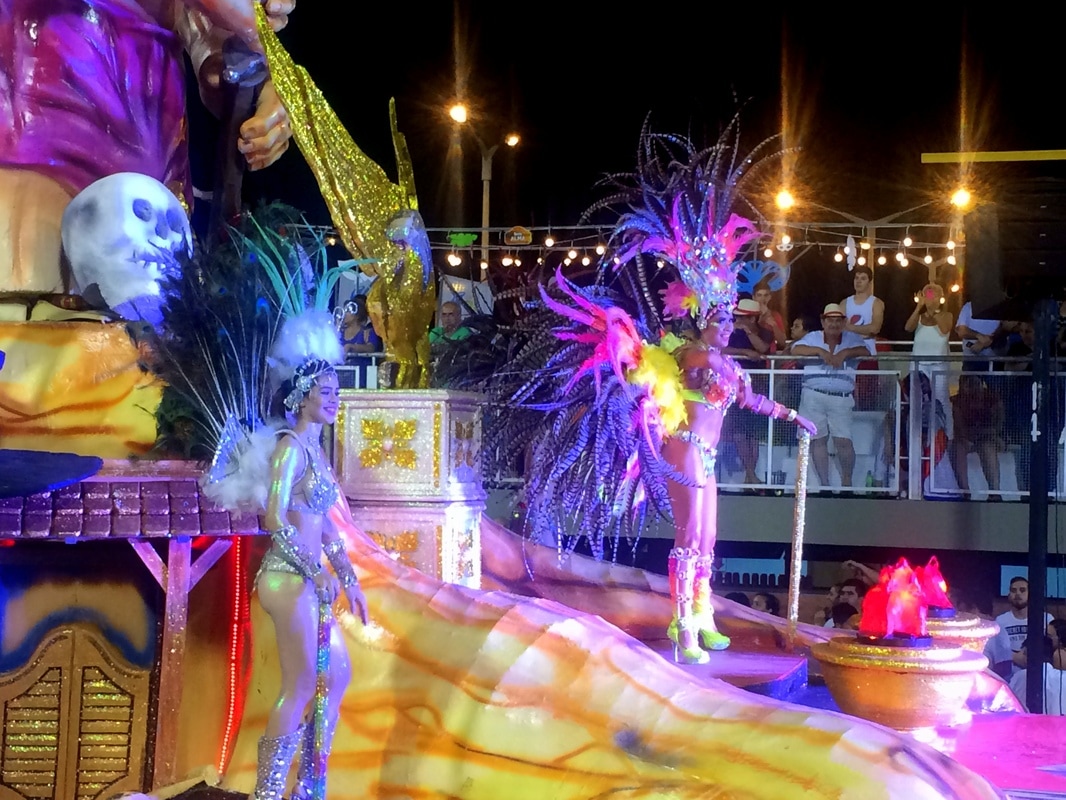 This is the time. For them, for us, for everybody.

Carnaval in Paraguay. This is where we live for. 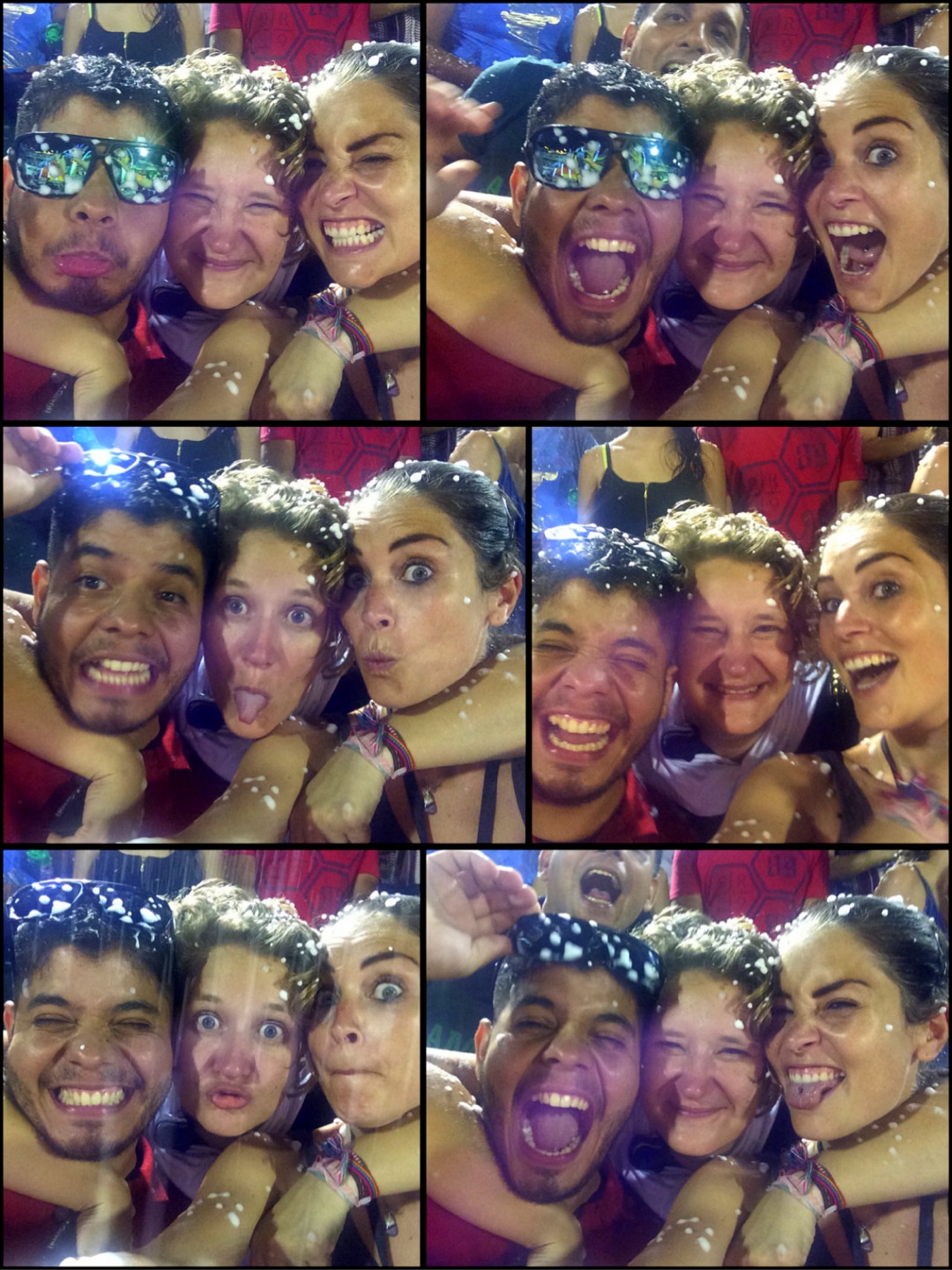 In order to support the travelers’ community, I spend many hours per week to adequately document all information and advices for prospective visitors, accompanied by a (hopefully) entertaining insight into my personal observations and experiences. This service is and will remain free. However, if you voluntarily want to make a contribution and support my travels and thus the creation of new stories and information supply, here is the button you’re looking for:
Donate
Related:
- More Paraguay: Citytripping in Asuncíon and hiking through the jungle of Tobatí
- More Paraguay: Camping at a meat and dairy farm in the Gran Chaco (as a vegan)
- More Paraguay: Visiting an Mennonite Colony in Filadelfia
- More Paraguay: Cheap-electronics-paradise Ciudad del Este (where I met Giuliano)
​- Just across the southern Paraguayan border: Villaguay, Colón & EL Palmar National Park, Argentina
- Carnaval in Barranquilla, Colombia
- Carnaval in Merida, Mexico
​- Partying and the good life in Rio de Janeiro, Brazil
​- Traditional folk dancing in San Cristobal de las Casas, Mexico
- Traditional celebrations in Humahuaca, Argentina
​- Traditional celebrations in León, Nicaragua
- Christmas celebrations in Cali, Colombia
​- Puno Day in Peru
​- 10 typical Dutch celebrations no traveller should miss out on