Download File
First I would like to clarify one thing: Anyone who travelled Peru but skipped Huaraz is a complete ass. So… now you decided to go there, let’s start with the blog: 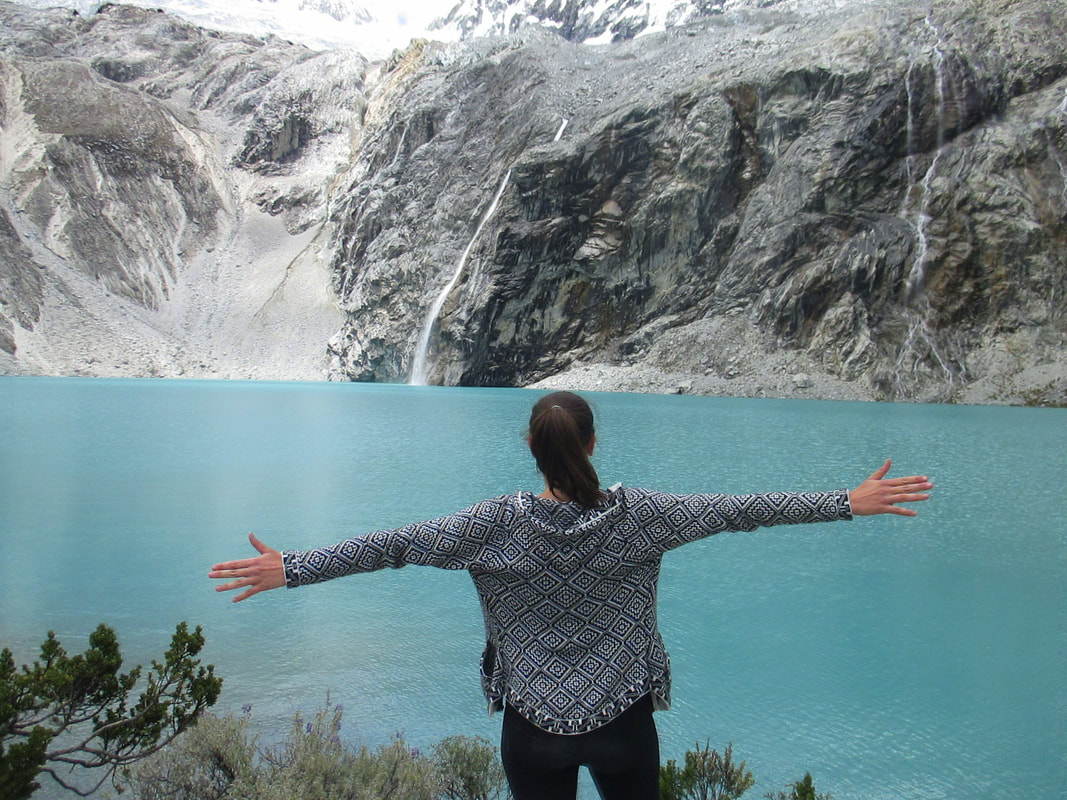 If you bus all the way to Huaraz it’s probably not the inner city you’re after, but the stunning area in which this hectic dirty town is located. Huaraz is situated smack-bam in between the Huascarán National Park, home of the Cordilleras (...de los Andes, so the Andes, in case you didn’t realize). This mountain chain is the wet dream of every hiker, trekker and climber.
​
The first day I sacrificed to organizing a handful of daytrips and the well-known 4-day Santa Cruz trek, which I’ve been looking forward to do for a month now. I learned two crucial; things this day: The local tourism ‘industry’ is completely non- transparent, unorganized and corrupt & 90% of the local travel agents will burn in hell. In short, this was a wasted day. 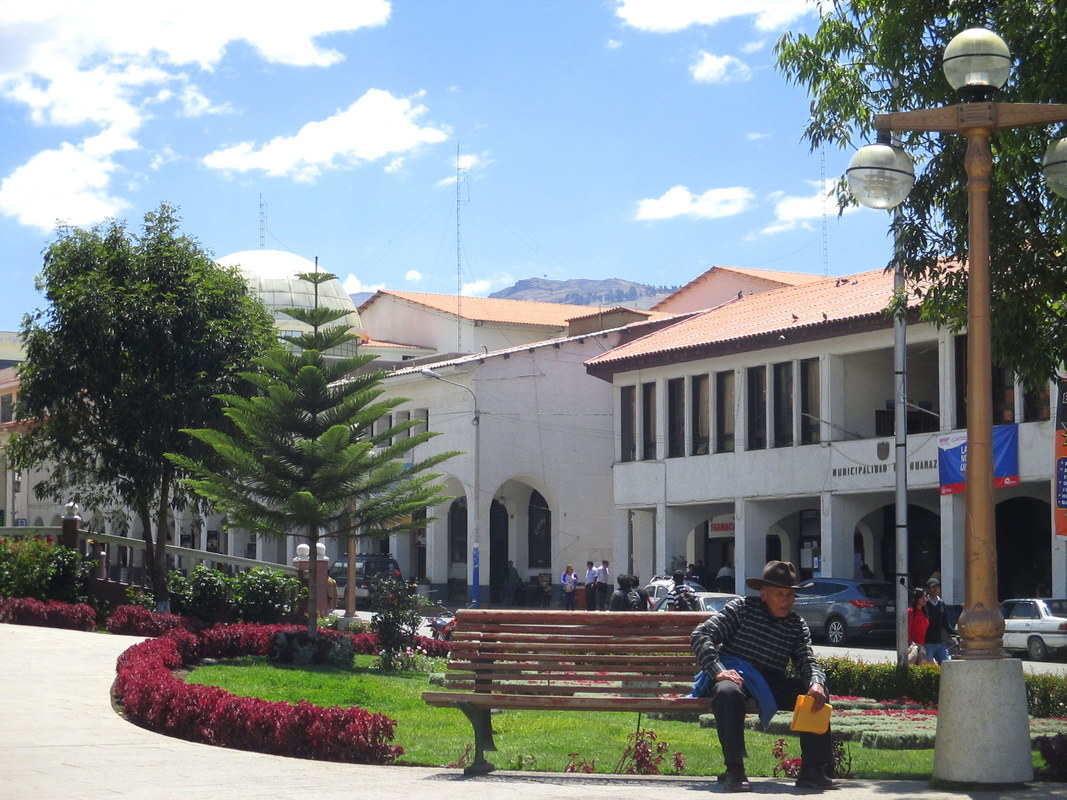 Determined not to waste any other day in this boring city I booked transport to the Laguna 69, which is as a turn-on as its name. On the way over there I learned to appreciate one unexpected facet of my homeland: the speed bumps. I am not sure which Peruvian masochist is in charge of the country´s speed-stoppers (which are built every three meters in each town), but every time the bus drives over it I am smashed against the ceiling while my last consumed meal finds its way back to my mouth again.
​
Luckily my car sickness wasn’t replaced with altitude sickness, and I could hike this piece of natural beauty in all its splendour. 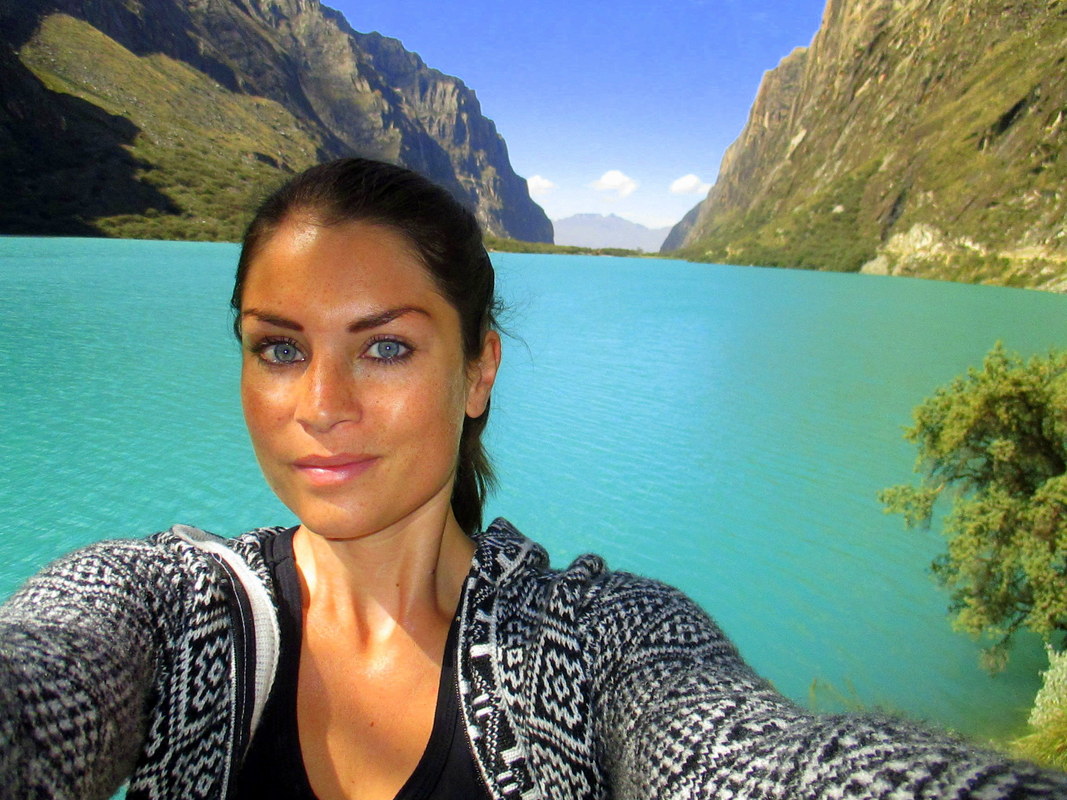 Really, I have no words for it… oh well, actually I do: The relatively intense hike up to the lake made me suppress the urge to run around in circles with my arms up to the sky, loudly screaming “the hills are aliiiiive with the sound of muuuuusic”. It felt like Austria or Slovenia (but pssssht, don’t tell anyone: even better). That’s really the best compliment I could give to a landscape. 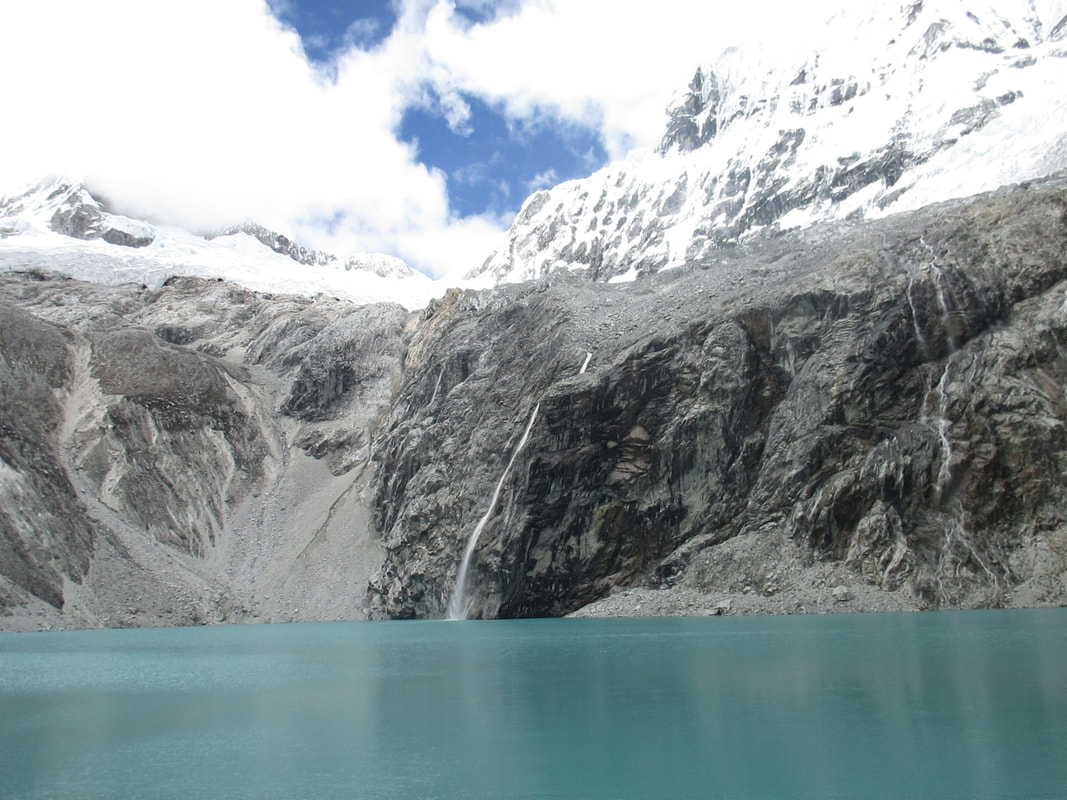 ​Although this place is usually very touristy, now in the low season I had this piece of land (almost) to myself and I could walk for hours without bumping into anyone. And when I did hear an American voice behind me saying with a thick Texas accent: “Par-lay vow Fren-says” (referring to my J’adore-Paris-top), I just quickly put the folksy gothic sounds of Nightwish or some other goth-metal bands on to underline this landscape with the perfect soundtrack.
​I got up there in almost half the time our bus driver predicted. This meant he was either talking bullshit, or I am just super-mega-incredibly fit. Of course I like to believe the latter. Once up at the pristine crystal-blue Laguna 69, decorated by waterfalls and snowy mountain peaks, I luckily learned that this was indeed correct. People who arrived an hour later asked me if I was on cocaine, as I basically ran up there (If you’re wondering: I wasn’t). Overwhelmed by nature, but shattered by my own intense enthusiasm I therefore collapsed at my bed once back at the hostel. 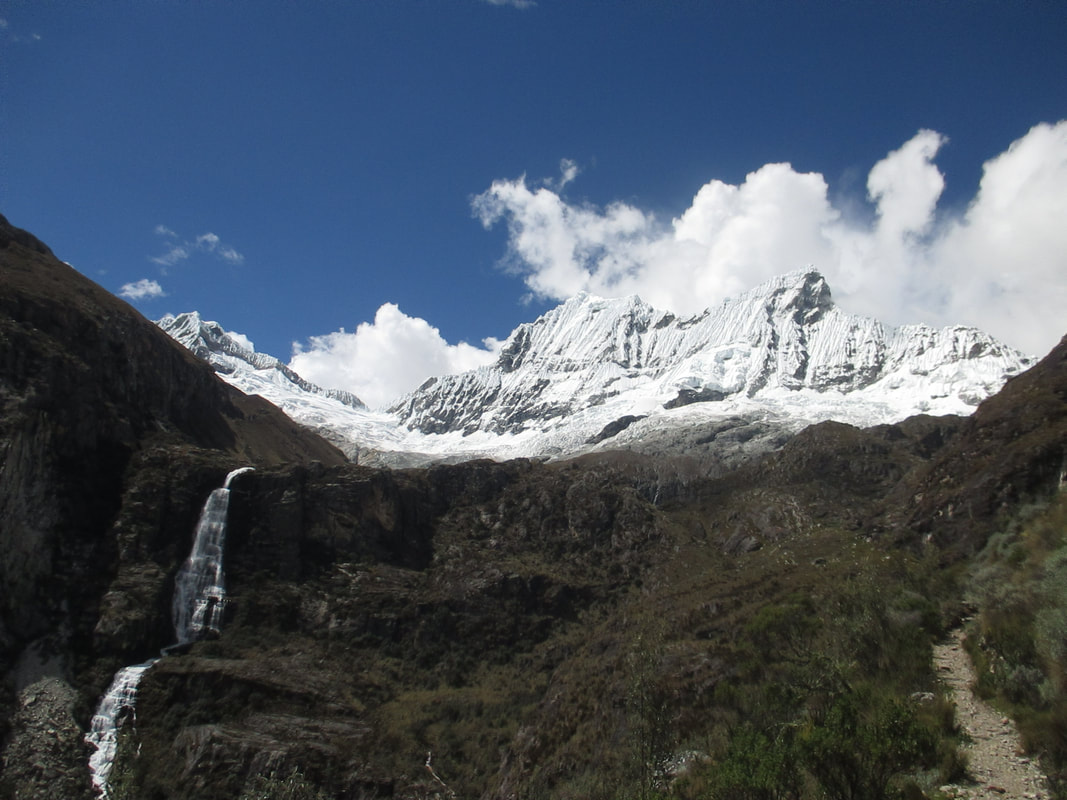 The day after I organized an easier day: a visit to the other side of the national park, namely the Postoruri Glacier. 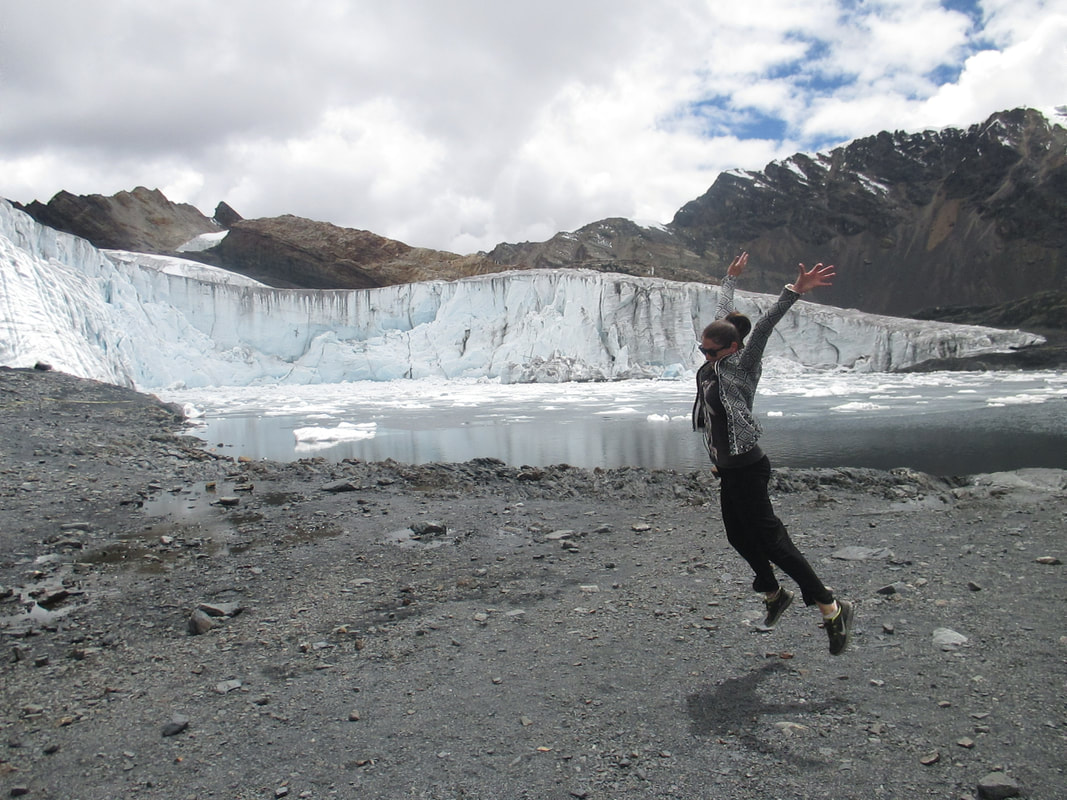 South America is the most diverse continent I ever visited. In the same country, or even in the same city, I can experience a climate change from freezing temperatures to oh-my-god-it’s-so-warm-I-need-to-be-naked-hotness within 24 hours. Also landscape-wise the differences are immense.

Yesterday I was still marching through the lush green fields surrounding Laguna 69, now I gaped at a yellow’ish dry landscape dotted by surrealistically shaped plants and clear green puddles.
​
Again, I was blown off my feet.
​After some Kodak-photo-stops we arrived at the foot of the glacier, where we had to hike up in this landscape of ice. It’s amusing how differently Europeans and South Americans define cold. I hiked up wearing only a tanktop (and pants, yes), while I passed Peruvian day-trippers wrapped in their Michelin-man-jackets, gloves and thick lama-hats. 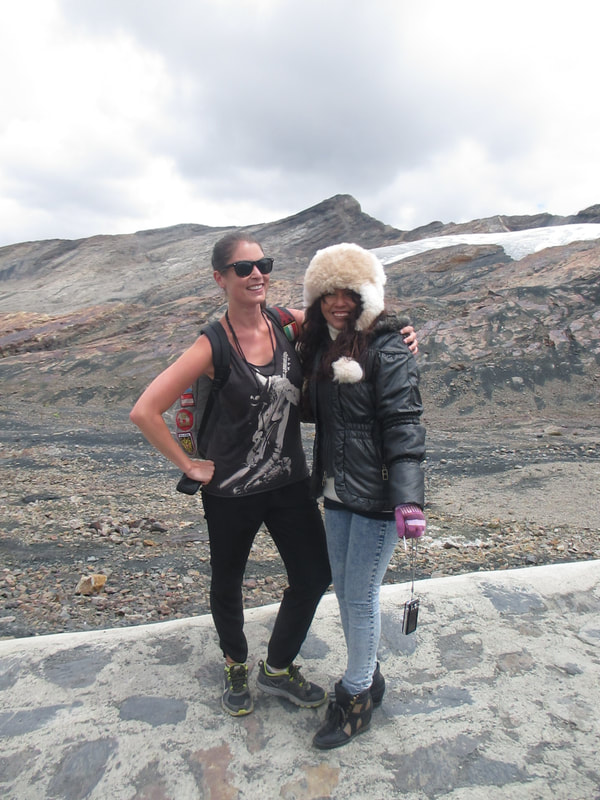 Back in Huaraz I tried to organize the Santa Cruz trek last minute, as one day before is apparently the only time to book it. Due to the low season, none of the 1001 companies had enough people to leave for the trek, only 1: Peru Diamond. As I really really REALLY wanted to do this trek I choose to ignore the bad reviews I found online and just take that as a warning to prepare myself well. So stashed up with water-purifying tablets, altitude sickness pills, a 2kg first aid kit, an extra rented sleeping bag and enough food to survive a winter in Antarctica I awaited the 6AM pick-up.

I should have listened to my instinct here instead of forcing this to happen no matter what... but I didn’t, and I was about to star in the Shitshow of the Century. 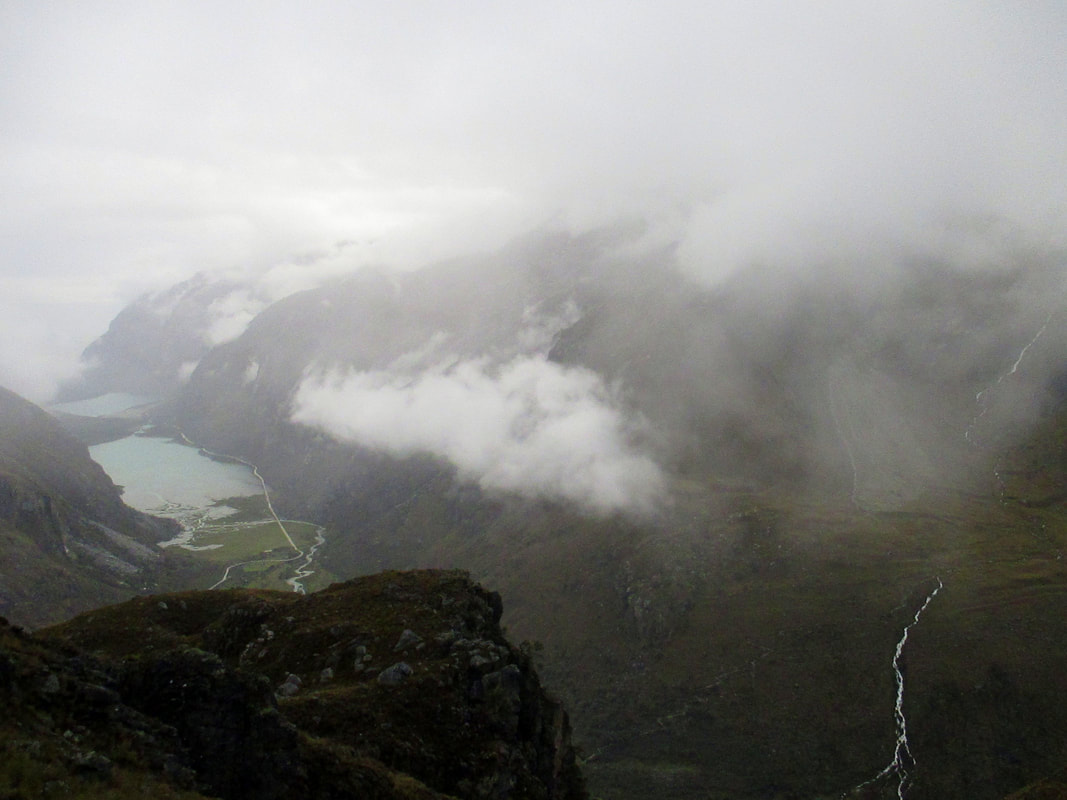 I entered the bus and saw that the “Par-lay vow Fren-says” Texans as well as a shitload of Frenchies were going to be my trekking partners for the next four days. Really, these people looked seriously French: The only thing that was missing was a baguette clamped under their armpits. Sometimes I like to pretend I don’t speak their language (I tend to do that with embarrassing Dutch tourists too, I just start screaming random stuff in Italian or Spanish to make them leave). It seemed to be our [irony] lucky day [/irony]: We hadn’t even left Huaraz for 10 minutes or we ran into a roadblock of armed angry people setting every car on fire that dared to pass. Yes, again.
​
After a 2-hour wait the mob started rioting and we quickly had to turn around. From a safe distance we witnessed a shocking amount of loaded police cars driving in that direction and saw only ambulances going back. 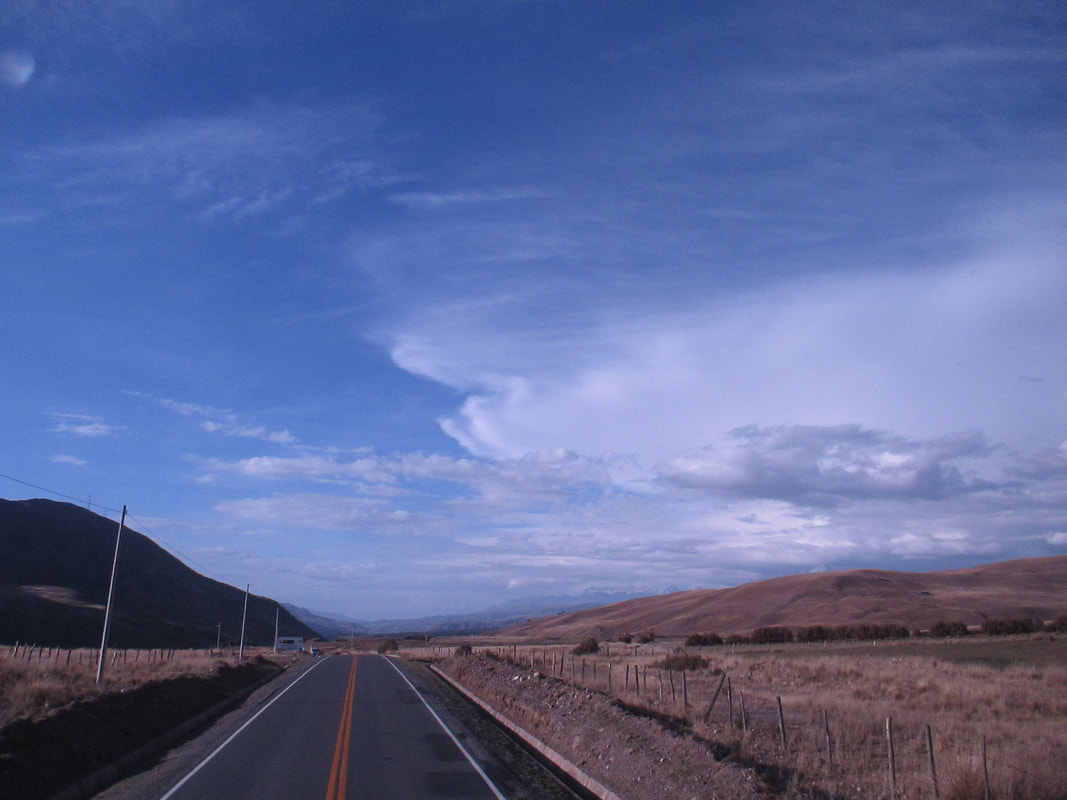 Once returned to Huaraz I learned that the government had decided to sell this national park to the USA, Canada and Australia to exploit it for mining… Wow, a good reason to protest then! Give me a gun and a bandana and I’ll join. Therefore I didn’t care that we could only enter the national park at midnight and missed the first day of our trek.

As we had to make up for the missed day of hiking, the second day the alarm tortured us out of our ‘beds’ (leaking air beds) at 3:30AM. I hardly slept, as this ‘great’ company Peru Diamonds had forgotten my sleeping bag, and my extra rented one was not enough for the below zero temperatures. Also, our cook Juan who was part of our trek had a bit too much fun with the liquor, and for some reason he shouted my name all night long with a double tongue, keeping everyone awake. 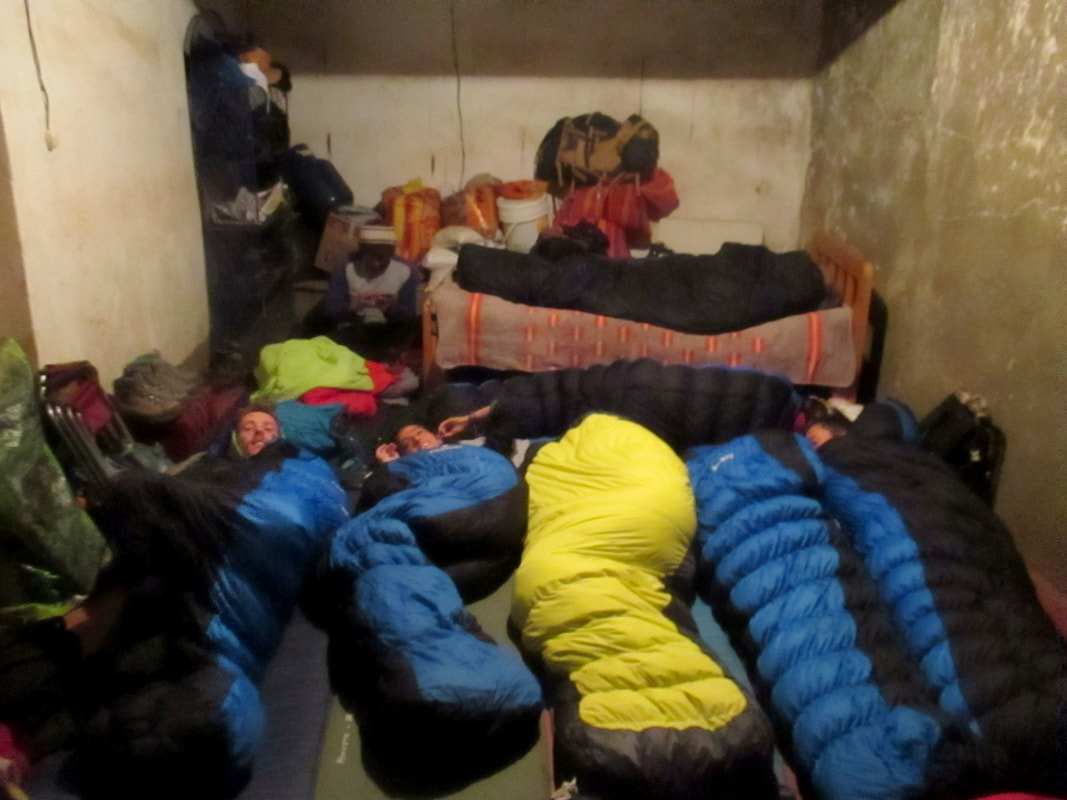 ​Pachamama must have known that we were sleepy, as after breakfast she woke us up with the ice cold rain that started pouring down and didn’t stop for the rest of the day. So with three layers of clothing, a poncho and plastic bags tied around my shoes I elegantly started this first day of trekking, which appeared to last for 12 hours straight.
​The weather conditions must have made me slightly brain-damaged, as I was still having a great time. I just put on the marching metal of Rammstein and Oomph and kept on going, step after step, fueled by the misty yet incredible views of the Huascarán national wonder. I appeared to have much more in common with the friendly old Texans Gary & Luke then with the snobby French enclave, and also our guide Abel did his best to entertain me. Of course at some points the cheesy comments came out (“I need the phone number of your parents to congratulate them with creating such a beautiful princess” – Yes, do that, my dad would be delighted to hear that from some random Latino dude about his daughter who is all alone on the other side of the world right now). Although the elements challenged us severely, the 12-hour hike was absolutely incredible. The views were insanely gorgeous and as I did a lot of trekking recently I was not tired at all, opposed to the continuously whining Frenchies.
​Well, they were about to whine a lot more. 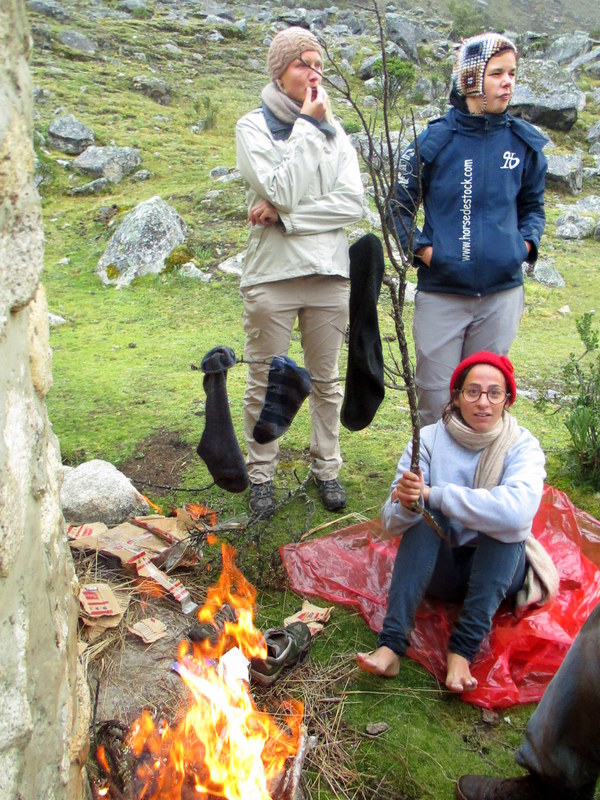 ​When we finally arrived at our camping spot the donkeys that carried our tents, food and luggage didn’t show up. Except of a diarrhoea-covered hole-in-the-ground-toilet there was no shelter and off course it started pouring down even more. We found a low cave where we could flee from the wind and rain and started a campfire in order not to freeze in our soaked clothes.

The vibe got very ugly, as the françaises were convinced they were looking Death straight in the eyes. I couldn’t even hear myself think, and that’s what I need to do in situations like this: Shut up and think, research my options. In this case the best thing to do was dry my clothes at the campfire, sleep in the cave and start walking to the next village which was seven hours away once the sun would come up. None of our phones had any service, also not the ‘always-available-phone’ our guide bragged about.
Although I didn’t look forward to spending a night in a cave, I secretly quite enjoyed this unexpected adventure while the ‘Muricans and I prepared the food of us and a German hiker who joined the gang. After hours of French panicking and desperation the donkeys finally arrived though. One appeared to have collapsed due to the heavy load that got even heavier in the rain, and the poor thing broke his leg.  What do you mean, animal abuse? Again: Awesome company! Not.
​
Frozen to the bone I started yet another cold night. To give an idea how cold: I was wearing a top, two warm sweaters, a Gore-Tex jacket, two pair of socks and two pair of pants and lied in a borrowed minus-15-degrees-sleeping-bag he had given to me together with a bottle filled up with hot water.  That’s what happens 5km above sea level. 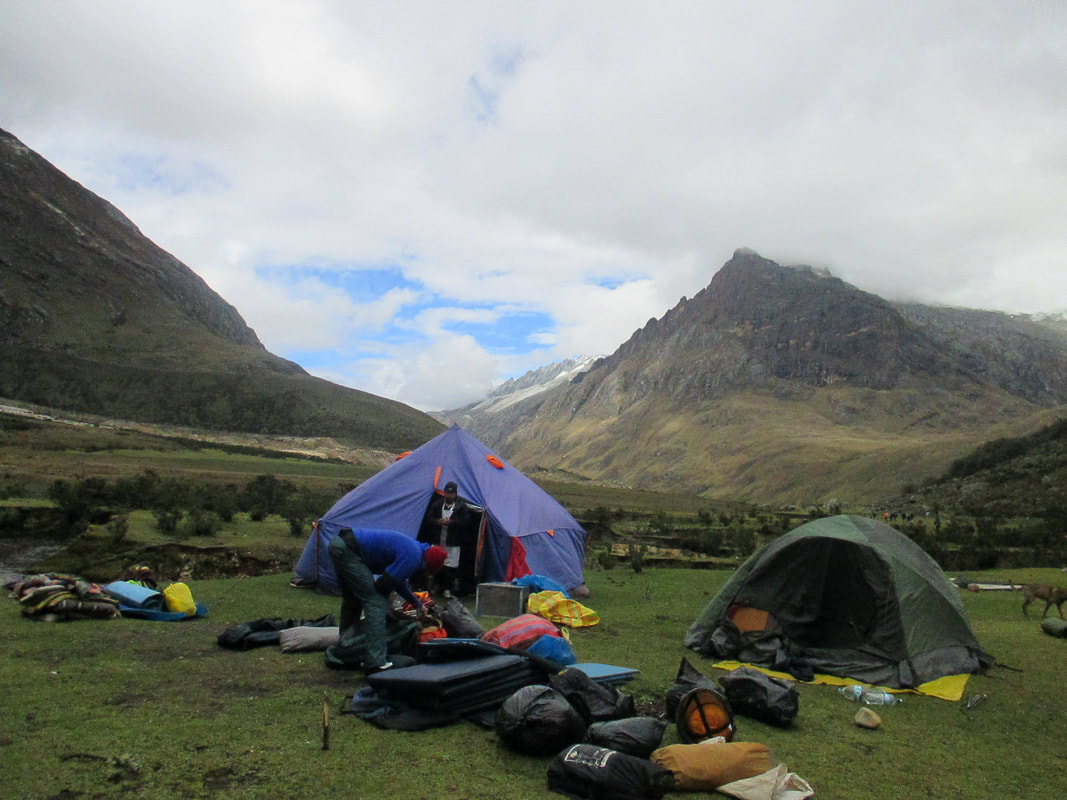 ​What a difference a day makes. Or a mountain pass. The next morning the bright sun burnt my nose while I enjoyed the delicious pancakes Drunken Juan baked. We were about to experience all four seasons in one day, as the mountains seem to have their own micro climate. At one point in time I was sun-baking in the green grass next to a picturesque river twisting through the valley, the next moment I blew hot air in my hands at the windy but gorgeous look-out points while escaping the rain clouds following me. 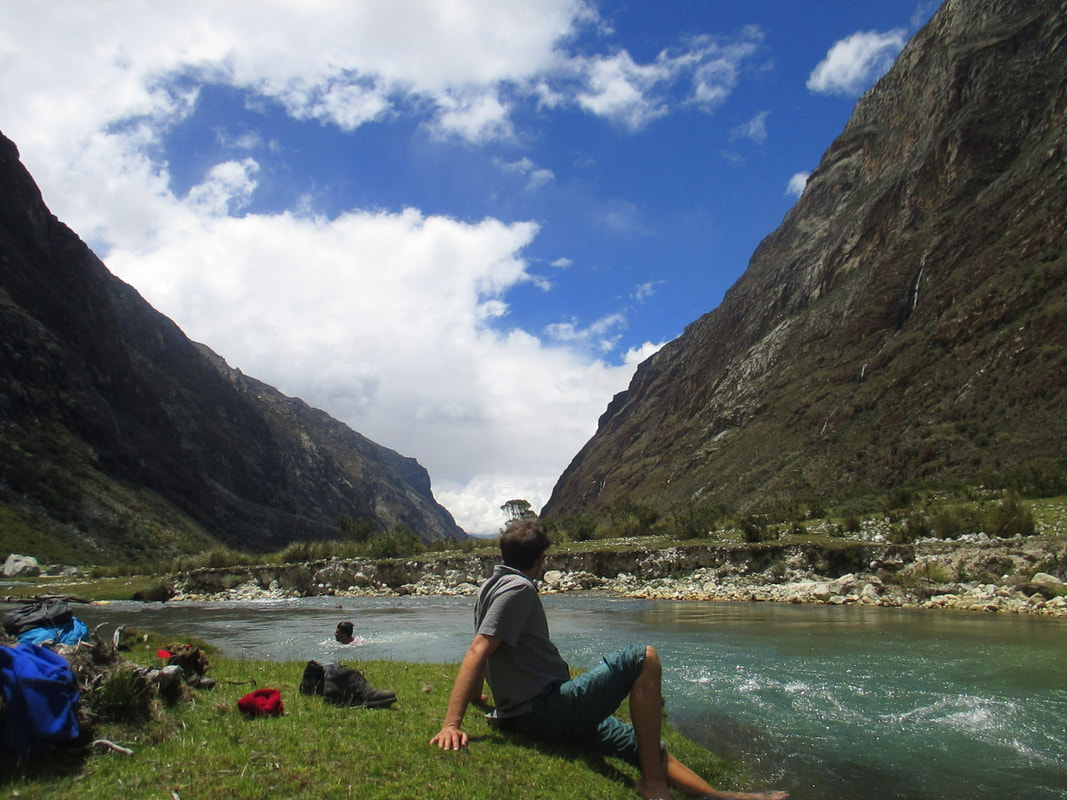 The intensity of the elements and our dependence on it impressed me. We humans like to believe we can control everything.

In the mountains you’re really confronted with the fact that you’re just a small insignificant part of the ecosystem.

It was a beautiful day! And as most of the French left as they were just too snobby to handle the primitive conditions, things got even more beautiful. We finished the whole 4-day Santa Cruz trek in just two days and camped at a village.
​The last day we hiked the last 1,5 hours to reach some hot springs. I was a bit worried that we would heavily pollute these aguas calientes as this was the longest period in my life that I didn’t have a shower: four full days, ugh. Yup, nature doesn’t come with luxuries as regulated showers and toilet facilities (Too much information: I experienced my first #2 in the open air as well). However, the locals had ‘sacrificed’ so much trash and garbage to Pachamama at these hot springs that there was not much left to pollute. 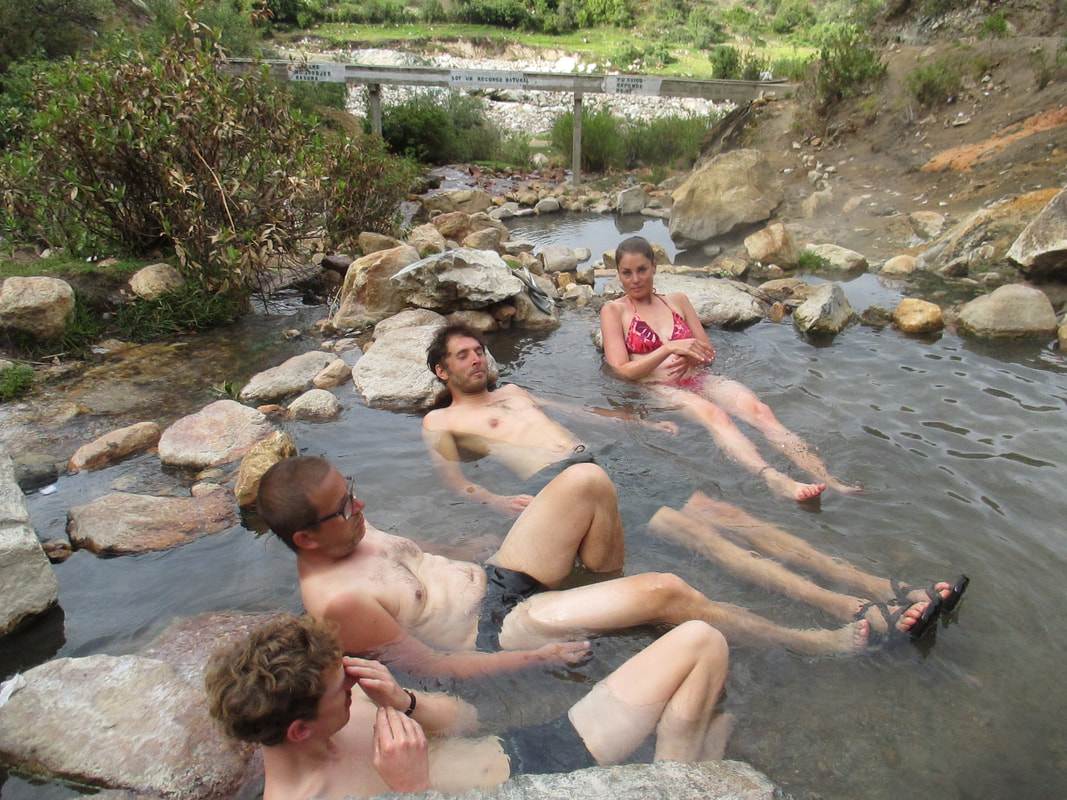 Such a shame, because this place might have well been one of the most breath-taking, incredible places I visited in Peru… or maybe even in the whole continent so far.