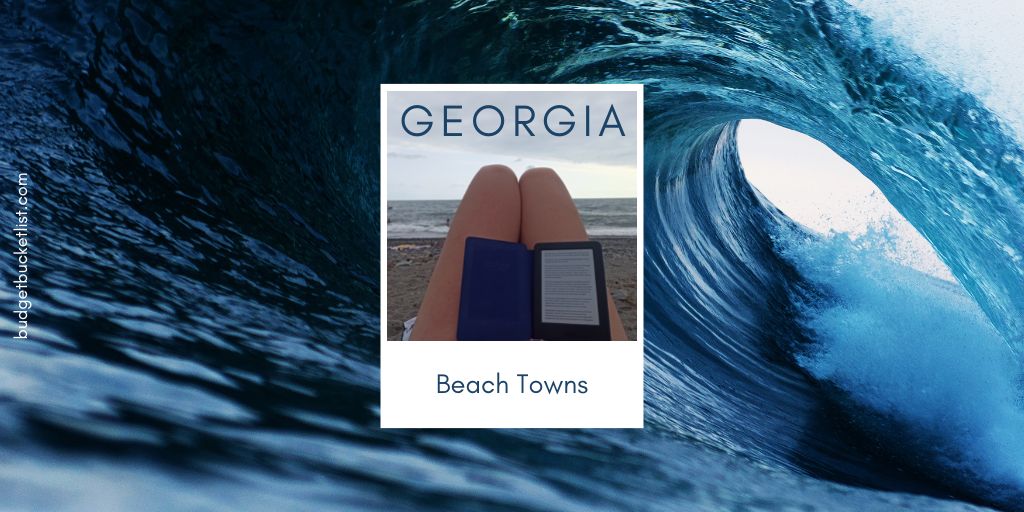 Not in the story-mood? Scroll down for the Quick Budget Fact Overview: an itemized information summary! ↓
Georgia is a remarkable travel destination for many reasons. This fairly undiscovered country has many exciting elements wrapped in its modest size: A fascinating history and culture marked by ancient old civilizations, a unique viticulture, a mouth-watering culinary scene, as well as an endless array of picture-perfect hiking trails belonging to the Greater Caucasus. And yes, as it borders the Black Sea it has some coastline too. Don’t get too excited though… whereas it’s definitely impressive for Georgia to check off the full nature-cities-beaches-travel-bingo, their shores are rather underwhelming. Expect dark sometimes-stony beaches, black muddy waters (“Black” Sea for a reason) and unfortunately, a bunch of trash left by humankind. That said, if you (like me) crave to break up the ongoing trekking adventures with a little salty plunge here and there, it will do the job.

Let’s dive deeper into Georgia’s shore – what have they got in store for us sun-searching travelers? 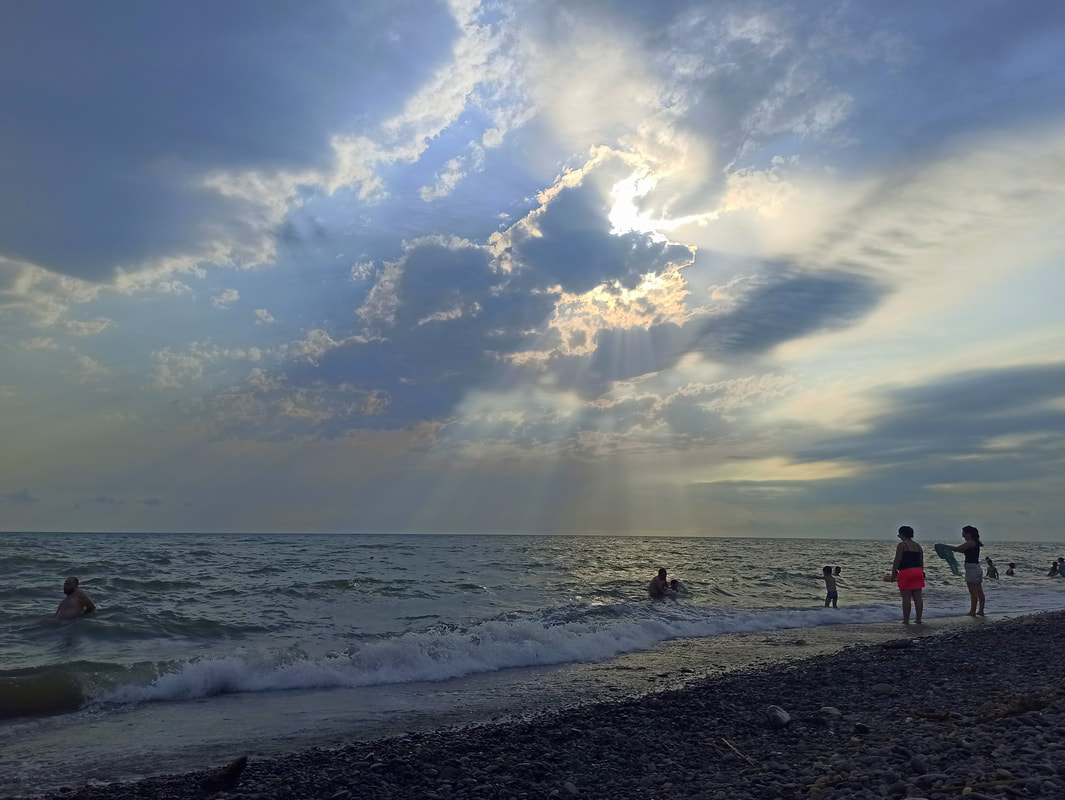 I spent an unreasonably long time in Anaklia (7 days), a forlorn beach resort at walking distance from the border of Russia-occupied Abkhazia. Especially considering it was raining the whole week through (causing the coast guards to forbid swimming altogether), with only a few splashes of sunshine here and there to keep my hopes up. It looks like once upon a time Anaklia would have been worth it, as there certainly were big plans for this destination. No costs nor efforts seemed to have been spared for its redevelopment, resulting in an 8km-strip of (greyish) man-made sand beach, lavish 5* beachfront hotels, high-end restaurants, a yacht harbour, wide palmtree-dotted bicycle- and pedestrian lanes, tennis- and basketball courts, a festival ground, a waterpark, modern art works, a long state-of-the-art pedestrian bridge, and even small visitor-friendly details such as trash bins, showers, ample parking lots, and their very own Baywatch-team. What happened!? Covid? The Russian conflict? All the promising renovation works seemed to have suddenly halted, resulting in the visible decay of construction works that weren’t even finished yet. Anaklia is now a slightly overgrown ghost town of grass-covered building carcasses, rotting woodwork and harbours clogged by mud and moss. A gloomy posterboy of “what could have been.” The last festival happened in 2018, the road to the Kolkheti National Park (the main attraction in the area) remains unfinished. Yet, on any given sunny weekend it encounters a little splurge of local tourism, the Zugdidi residents flocking together for that welcome stretch of coast they have in their backyards… and that short experience of local escapism, which is so different from the cities or the mountain chains, felt like it was worth my while. Not the mention the best dog of Georgia, who resides in Anaklia.
Talking about Zugdidi*… if you’re either going to visit Anaklia or Svaneti (preferably both), you will pass through it. It’s worth considering a little stopover, be it for a little lunchbreak or to spend the entire day. Honestly, arriving hungry is the best approach when dealing with Zugdidi, as this destination is valued for its scrumptious Mingrelian food. I’m a sucker for Georgian food in general (aren’t we all?), but the spicy dishes of this region will permanently mark my travel memories. An insider tip** led me to Restaurant Dariano, and I’m thrilled to pass the favor on to you.

Besides eating your way around town, the main attraction is the impressive yet slightly detoriating Dadiani Palace, one of the oldest museums in the Caucasus which houses, besides some historic paraphernalia, an intriguing art collection of Friedrich Frisch, a talented traveling painter capturing a Georgia-that-once-was like a valuable time capsule. Another random collection piece is one of Napoleon’s death masks. At the side of the premises you can find the Botanical Garden, originally constructed in 1840 under the guidance of Queen Ekaterine, where surprisingly enough camping is allowed in case you decide to spend the night in Zugdidi (both entrance and camping for a fee).


* the bus from Zugdidi to Anaklia costs anno 2022 only 1 lari. However, take Georgia’s hyperinflation into account.
** Georgia-based blogger Wanderlush spent no less than 2 weeks here and wrote quite the elaborate overview of every imaginable activity in this compact city.
Poti / Kolkheti National Park

“Poti has the largest port of Georgia. From its own income, it can replenish the central budget of the country and live self-sufficiently.  However, [..] Poti residents experience poverty and unemployment. The sewage system is faulty, the roads are in poor condition, and the city gets flooded after rainfall. Poti suffocates from the smell of fish, residents suffer from mosquitoes and the air is polluted by heavy metals.” [Source: Jam-news]. Not quite the invitation letter to the country’s main trade and industrial hub, which was once put on the map as Jason and the Argonauts’ presumed main entry point into Georgia on their voyage in search of the Golden Fleece (the name Poti is derived from the Ancient Greek colony of Phasis). Yet, it functions as the main entry point into the UNESCO-listed Kolkheti National Park, which is located just south of the city. Unlike the other national parks of Georgia, this one is computed by a conglomeration of biodiverse wetlands, rainforests as well as the noteworthy Pallastomi Lake, providing shelter to over 190 species of endemic and migratory birds. However, it’s good to note that hiking won’t get you very far here (believe me, I tried from Anaklia and it wasn’t pleasant). An exploration of the “Georgian Amazon” is only possible by a pre-booked 1,5hr Pichori River boat tour* which comes at a rather high cost. On top of that, you need to spend money on a taxi to reach the Visitor Centre (222 Guria Street), as public transport is at the time of publishing unavailable (hitchhiking back to Poti might be possible, but I don’t recommend hitchhiking from a busy city towards a remote location you have to arrive at at a precise time).


* Boat tours are available by motorboat (2-5p), pontoon boat (8p) or by kayak (2-seater). Prices constantly go up, so I refrain from quoting those here. Please call the visitor centre for the current rates (phone nr: +995 577 10 18 37). The boat tours are available throughout the year, although spring and autumn are most pleasant. Boats don’t depart when there’s too much rain or wind. You need to bring an ID to sign up just before departure. 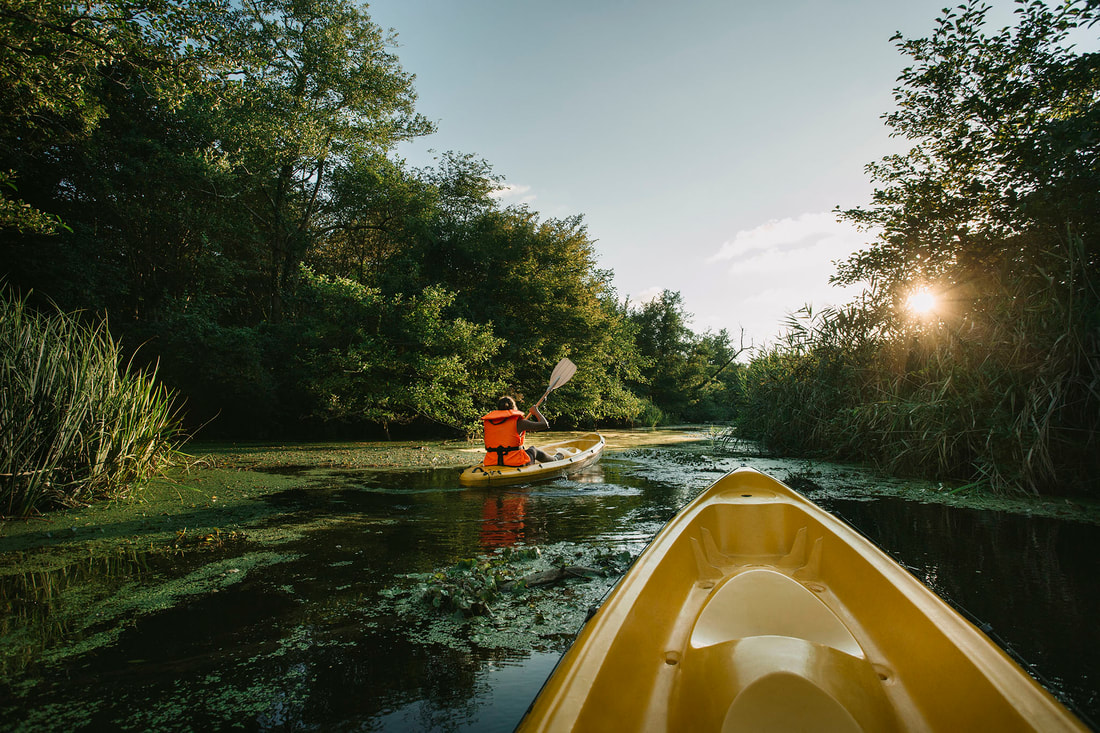 
The industrial harbour ruins Poti's chances to establish itself as an idyllic beach resort, although Poti certainly has a collection of rather pleasant beaches. Yet, travellers might enjoy exploring the no less than 70 buildings that acquired a “cultural heritage” status, as well as the recently painted street art murals or the Kolkheti Culture Museum. The title “Paris on the Black Sea” might be a bit far-fetched (it merely refers to the Parisian symmetrical city plan), but don’t be entirely discouraged to spend the day here.

With the risk of coming across as too negative in this article: I wasn’t too excited about Batumi either. I am sorry Georgia, I really adored the rest of your country… but my heart is full of your mountainscapes of rugged ridges and frosty peaks, of your cities drenched with culture and colorful wooden architecture, and of your vivid history of both joy and sorrow tightly embroidered within the scenes of daily life unfolding around you. All of this is lacking in the artificial pumped-out-of-the-ground funfair called Batumi, feeling more like an open-air casino than a place where people actually live their lives. Let me be clear, contradicting my own prior expectations, we’re not dealing with a cute little beach town here: You’ll arrive in a hectic city full of congestion, air pollution and neonlight buildings. Sure, you can stroll down the Boulevard in search of the famous Ali & Nino Statue, or chase that tan and lose yourself in the probably-pumping local nightlife. I guess that’s what most of Batumi’s visitors are after and it’s not my place to judge that, everyone has their preferences… buy this one isn’t mine. To me, Batumi is an unattractive yet convenient pass-through town on the way to Turkey!


* I haven’t personally visited these places, so I can’t vouch for it. Feel encouraged to update me with your personal reviews.
Quick Budget Fact Overview 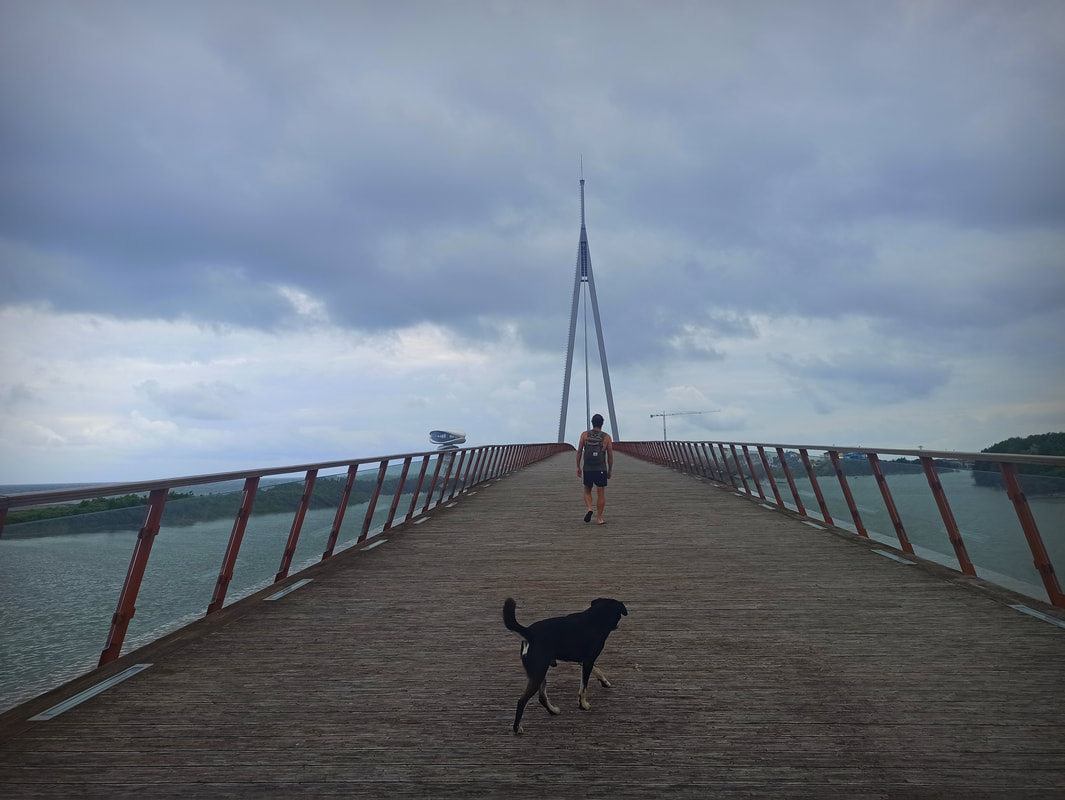 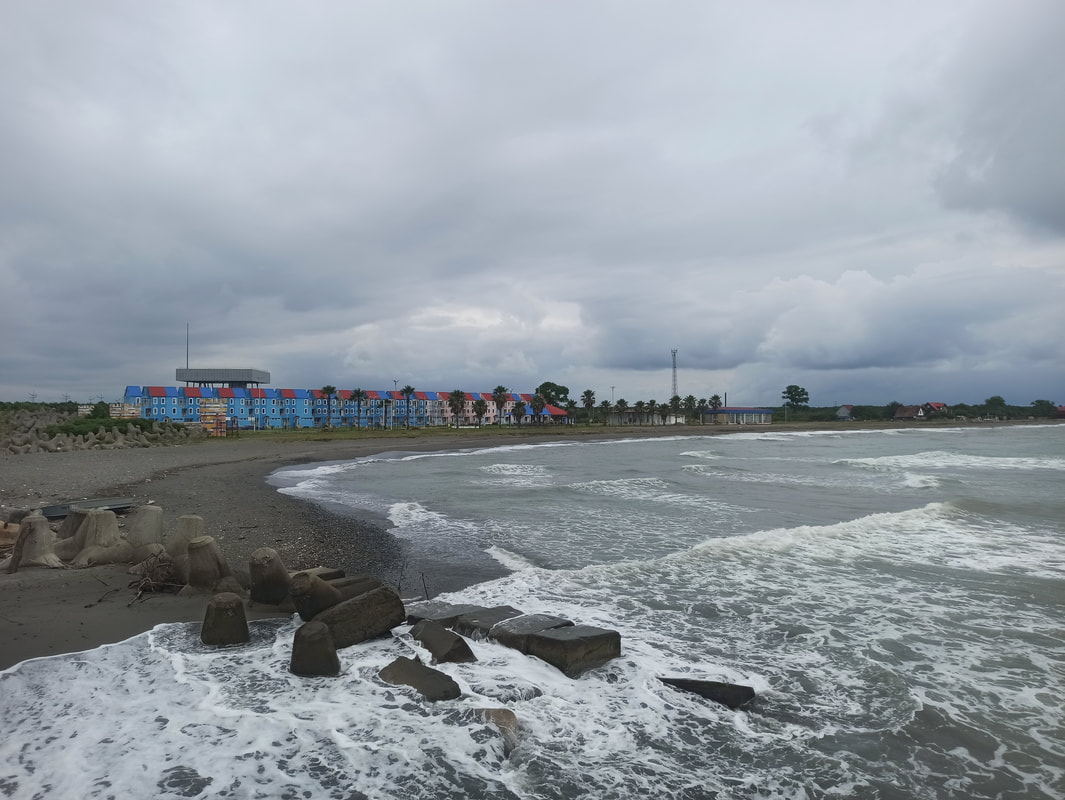 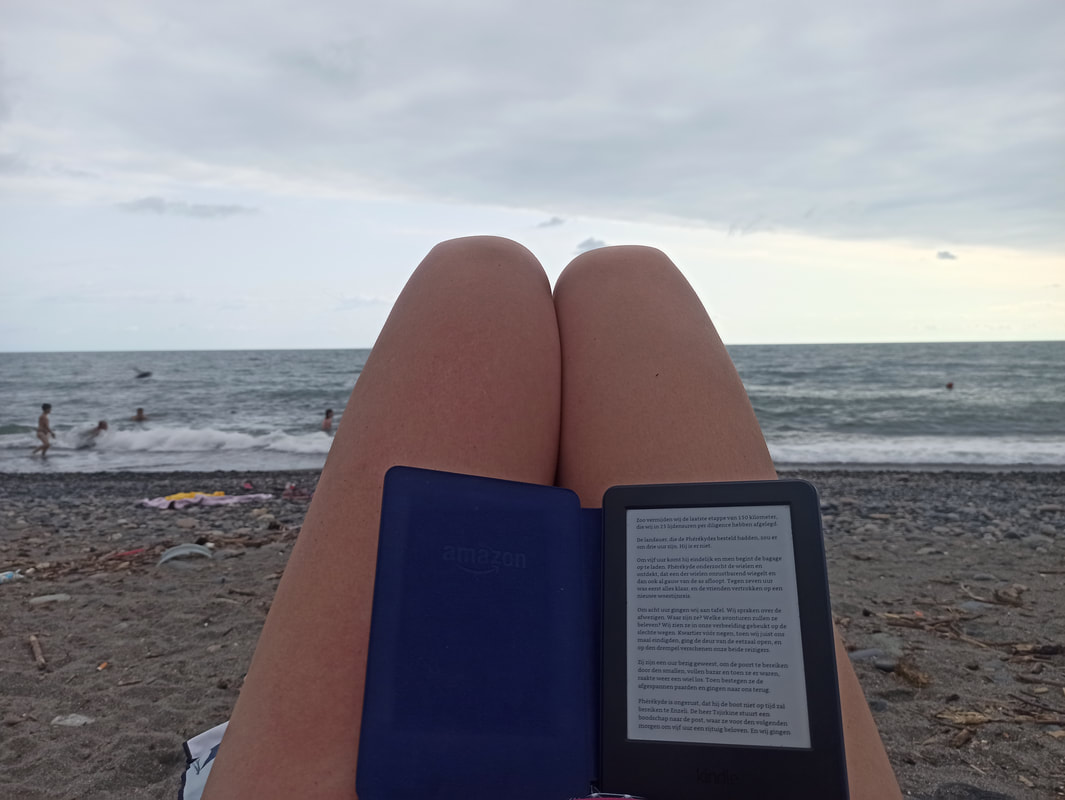 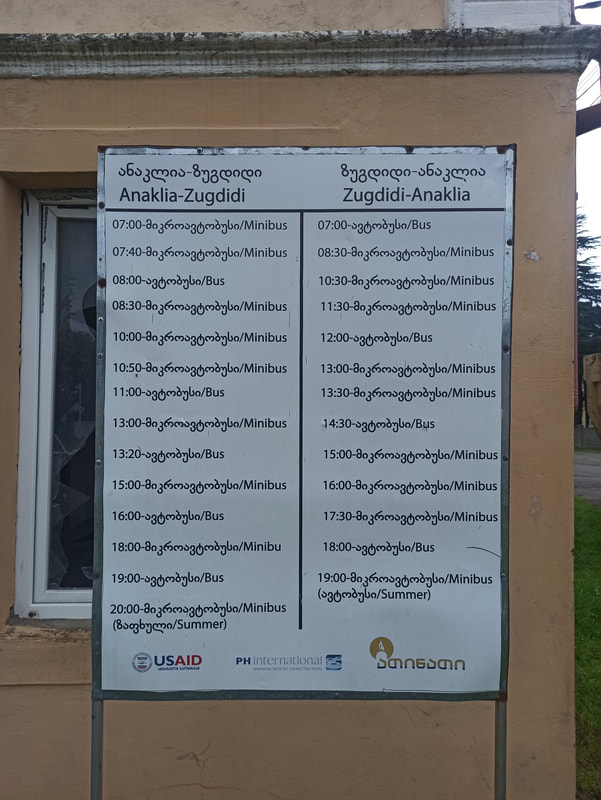