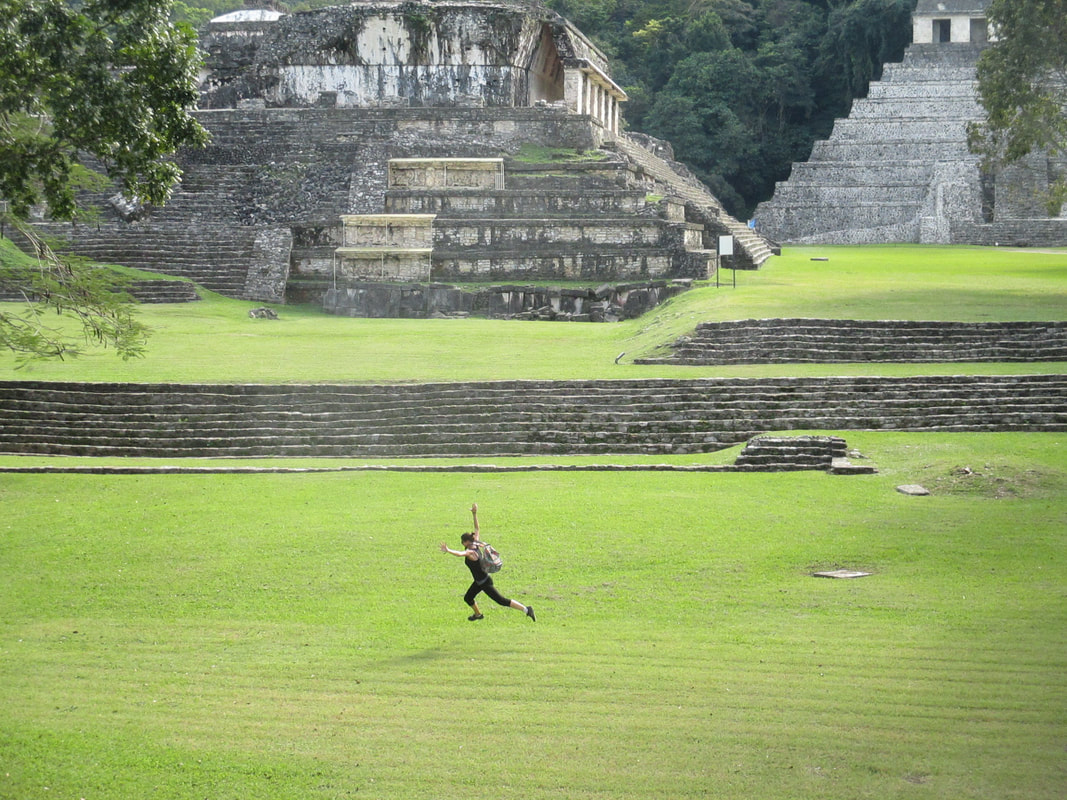 The Mexican Chiapas region is known for its protests and road blocks. If people wouldn’t have told me that I would have figured it out sooner or later anyway, as I ran into an impressive number of three road blocks on the relatively short way from San Cristobal De Las Casas to Palenque. For budget reasons I decided to boycott the ADO  ‘tourist bus’ company, which in retrospective would have been a good decision for everyone. Reason: The protesting transport companies block all access for their competitors’ vehicles, which means you have to get out of the bus, walk past the blockade and take another vehicle of the protesting company to the next road block and so on… If you already paid your ticket for ADO you can either wait for like 8 hours until the block is cleared, or pay the entire journey all over again in order to use their competitors’ vehicles. Don’t expect any help from the police or army in this (or any) case, they are all over the place but as usual don’t have any willpower or sense of justice of their own: They obey the wishes of a power system in which responsibility is shuffled around until it disappears somewhere… and history taught us what happens then: Genocides, killing and torturing of citizens purely based on their political beliefs, power abuse… Okay, drifting off, just don’t expect any back-up from governmental institutions alright? Especially not Mexican ones. Just roll with the shit that comes with this beautiful country. 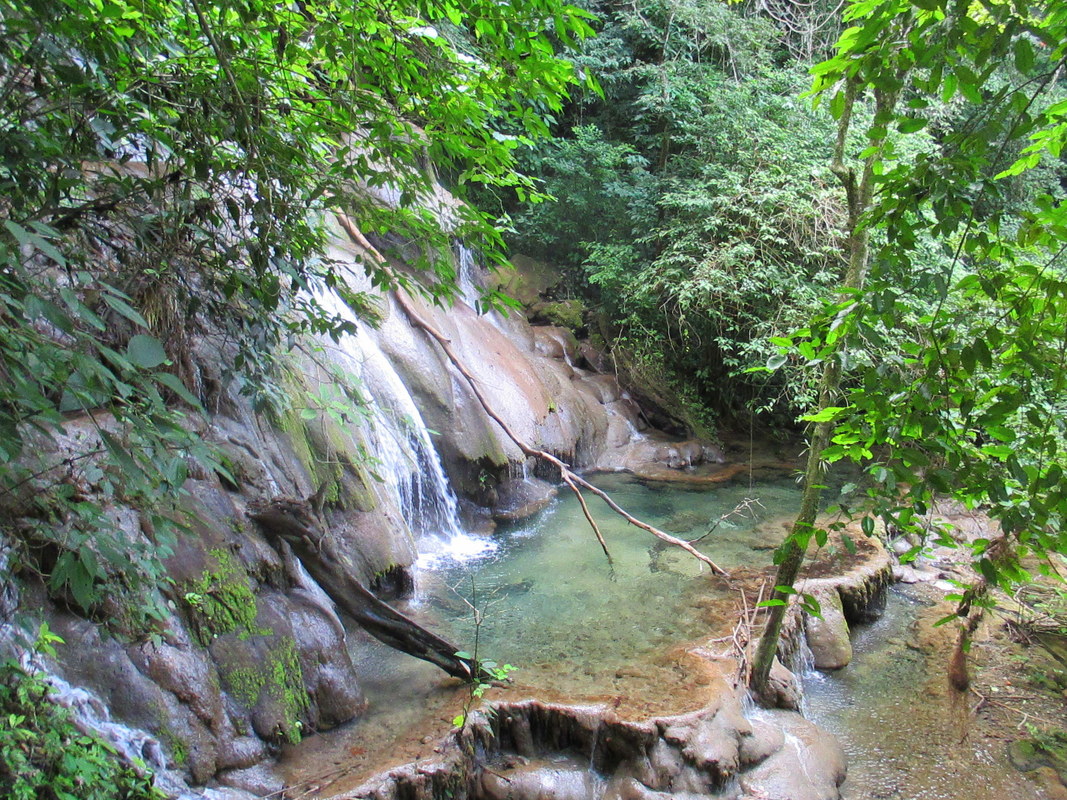 ​After way too many hours of travelling and hitchhiking here and there I finally drove into the tiny little centre of Palenque, which had the looks of a place pumped out of the ground to serve the needs of the ruins-seeking crowd. It’s not, as Palenque ‘town’ existed far before the discovery of the ruins, but I guess new migration now only happens in order to exploit tourism opportunities. 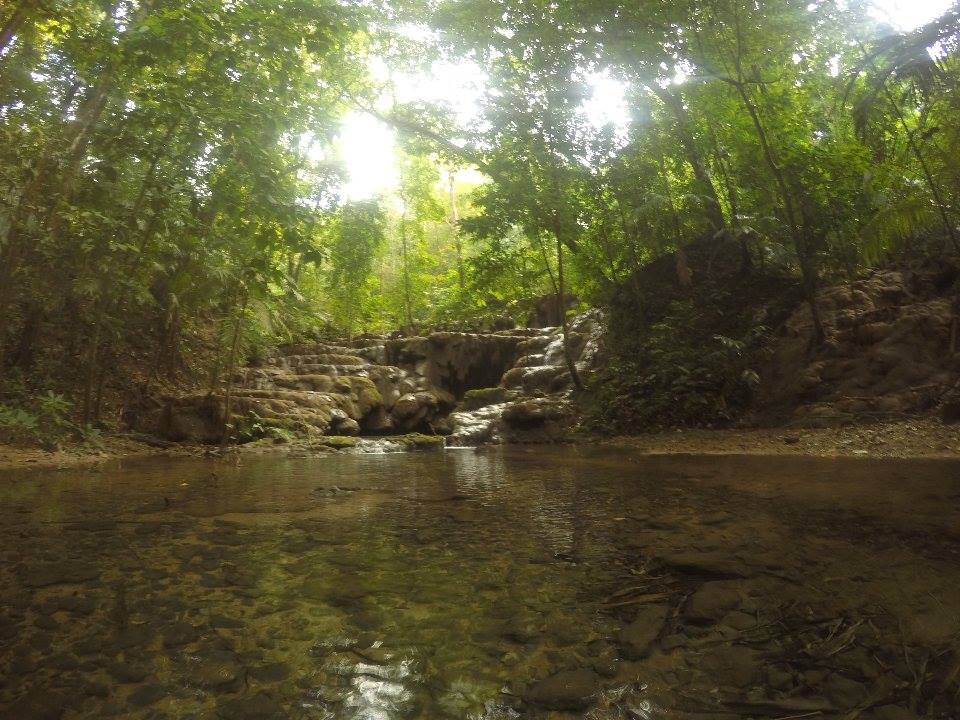 Nevertheless, the place is cheaper AF: For less than a dollar you have a street meal, and if you want to sit down in a bit of a western place you pay it off with a $1,50-3 meal. Interested I studied all the local dishes I had yet to familiarize myself with…

I present to you: A non-alphabetical, most probably dramatically incomplete list of all the fried to shit, corn-beans-meat-loaded, fat-dripping but I guess delicious non-cuisine our Meggggicanos have to offer us: 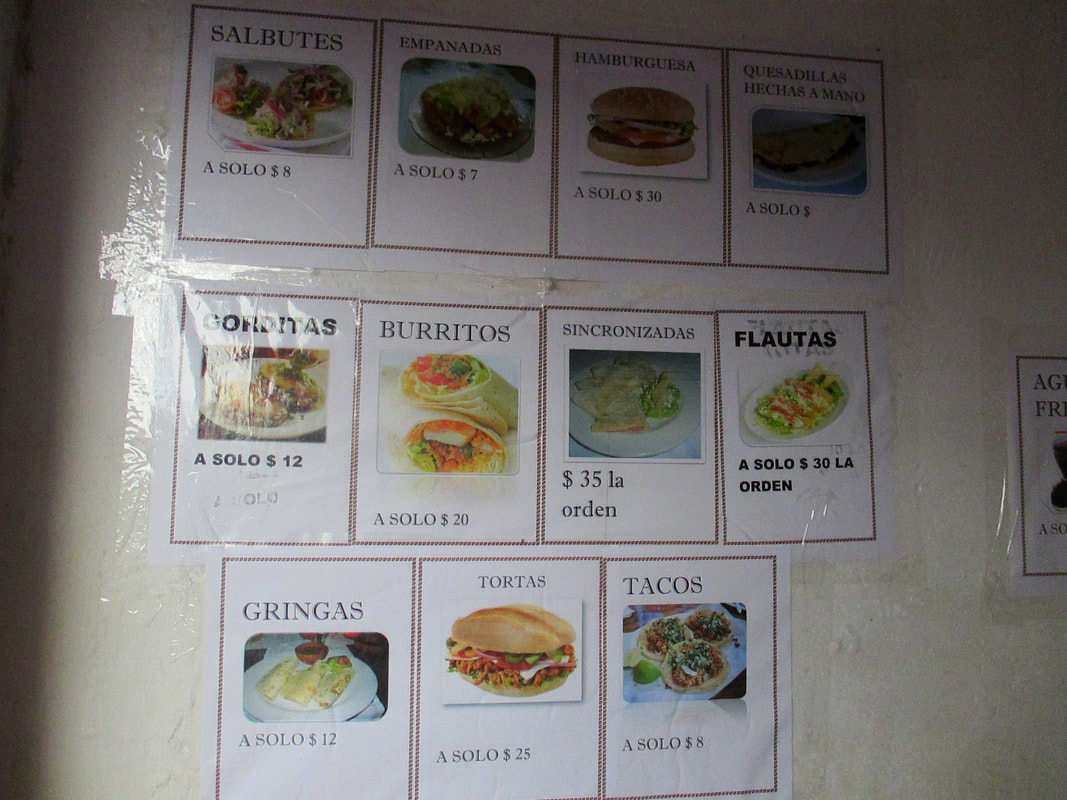 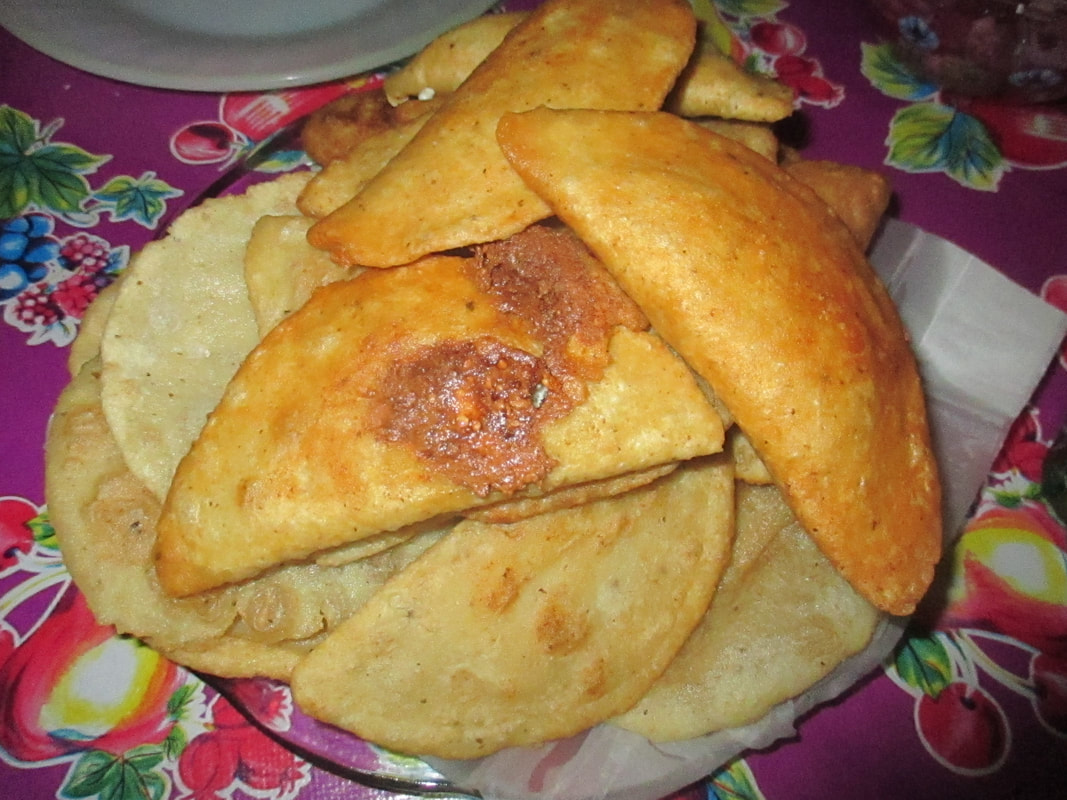 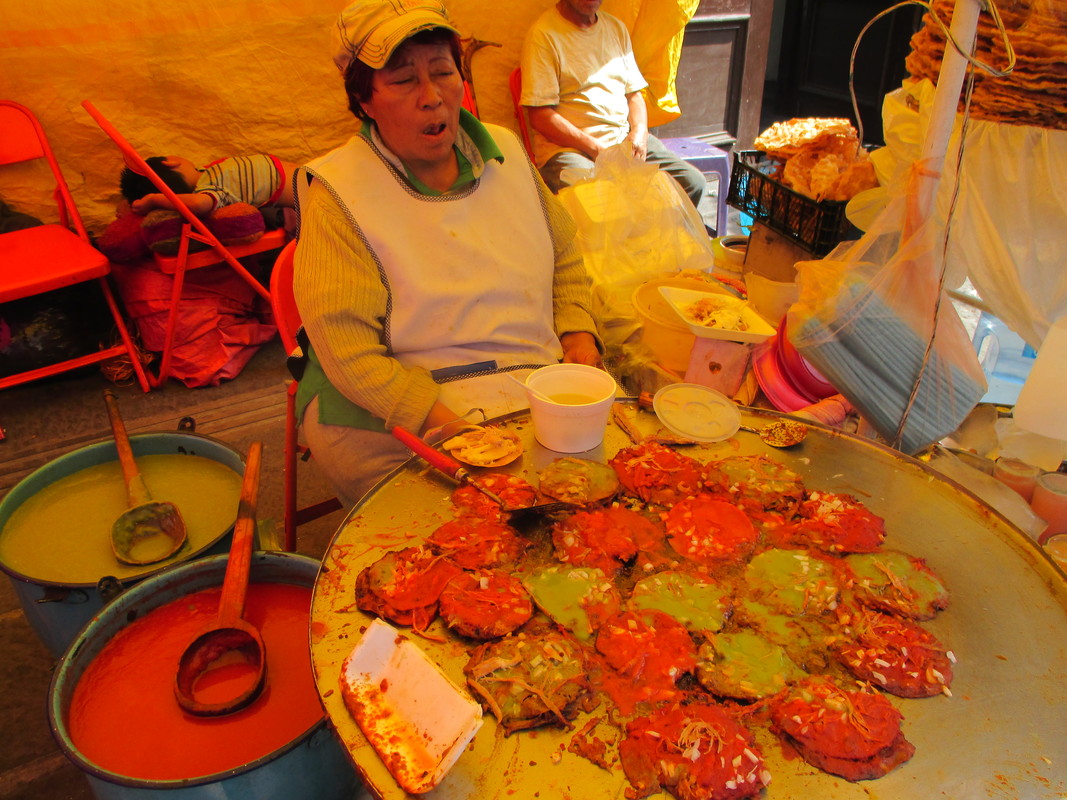 ​
… Everything served with the hottest chilisauce you ever ate in your life, level ‘bushfire’. You can cool your mouth with a fresh cup of toothbreaking sweet Tamarindo, Jamaica or Horchata… 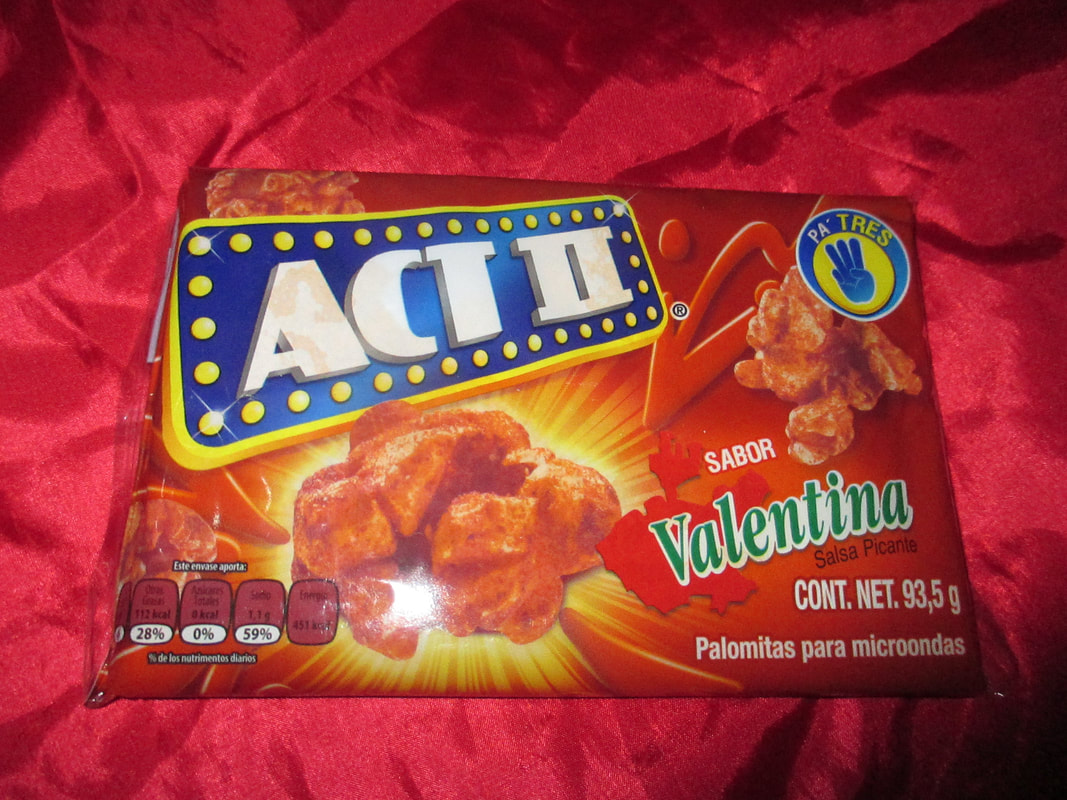 In short, only 10% of it I can really try with the vegan Gestapo travelling with me.  #fml. I must find a way to fabricate it without the meat and cheese inside, getting creative.

The ruins that were the sole reason for my visit weren’t expensive either, opposed to for example their Guatemalan counterpart (Tikal). They’re even free on Sundays… not for me of course, only locals enjoy that privilege. They do try to make you pay extra for making photos, but I can guarantee you know one ever checks if you did… and if they do, I always have my secret weapon: speaking solely Dutch all of a sudden. It’s amazing, people tend to completely freak out. First they will try to speak Spanish to you louder, like that would awaken your brain all of a sudden. Then they roam the environment for an English-speaking person, who in broken English tries to explain the intentions. The magical key is to keep on replying in Dutch, speaking as fast and using as many ‘GGGG’s as possible until at some point they dramatically give up and let you do whatever. It’s difficult, because I speak both English and Spanish and your mind tends to automatically switch to it or show signs of comprehension, but once you’ve got the skill down it’s really entertaining:

Incredible how rude people can be when they think you don’t understand what they are saying, a unique insight in the human species.
​The place itself is a gem. Even after being quite ruined out I could greatly appreciate the excellent maintained Maya remains. Even the original paint can be detected on some stone pieces! You can enter the pyramids to check out the grave tombs from up close. The most famous piece, the Knich Janaab Pakal, is for preservation reasons not available for the public eye, but an exact copy is exposed in the museum. The image seems to display the scene of the deceased Pakal resurrecting to the gods in the afterlife, although many sci-fi maniacs believe it represents proof of the Maya king being launched in a space ship. Yes, there is a conspiracy theory supporting the Mayas being aliens. Why not. I guess everyone has their beliefs and as I can’t proof it’s not true we leave it in the middle. 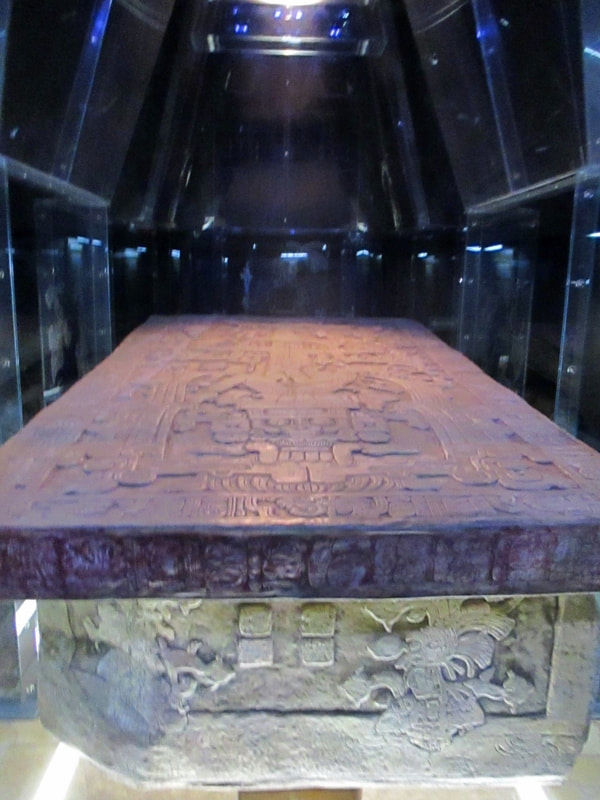 There were other excursions to cheaply undertake: The Misol-Ha waterfall and the Semuc-Champey-like brightly blue coloured Agua Azul. Unfortunately both the weather and my health didn’t permit any of this. I spent my time vomiting myself through the nights (my food poisoning aftermath) and my travel buddy had some fever-snot-attacks after his lungs got infected. Life cannot always be supportive, but luckily the Couchsurfing-network is. Doctor Fernando hospitably offered me a private studio and spent his nights entertaining me with his presence.
​
If Mexico isn’t already beautiful by itself, its people provide the extra sparkle. 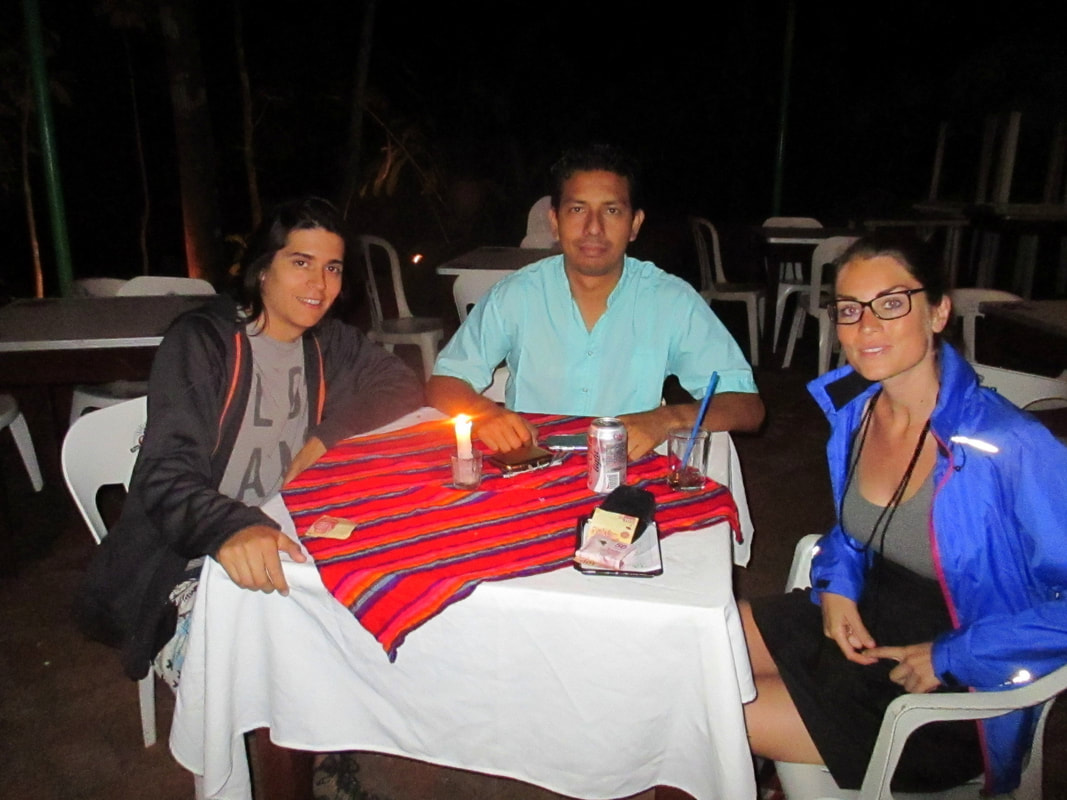 In order to support the travelers’ community, I spend many hours per week to adequately document all information and advices for prospective visitors, accompanied by a (hopefully) entertaining insight into my personal observations and experiences. This service is and will remain free. However, if you voluntarily want to make a contribution and support my travels and thus the creation of new stories and information supply, here is the button you’re looking for:
Donate
Related:
- More Maya and Aztec heritage in Mexico: Merida, Izamal, Tulum, Oaxaca, Valladolid and Mexico City
- Beaches & scuba-diving in Mexico: Cozumel & Tulum
- The vibrant cities of Mexico: Ciudad de Mexico, Merida, Oaxaca, Puebla, Queretaro, San Cristobal de las Casas
- City of Mayas: Tikal, Guatemala
- Visit the Maya Ruins in Copán, Honduras
- Back to Inca heritage: Machu Picchu, Peru
- Inca museums in Arequipa, Peru
- Inca aqueducts around Cajamarca, Peru
- Inca heritage at Copacabana, Isla del Sol
- The MAAM Museum in Salta, Argentina and its Inca children
- Food, food and more food in Belo Horizonte, Brazil
​- A vegan on a meat and dairy farm in Paraguay
​- The streetfood of Ecuador: Cuenca
​- Food poisoning in Peru
​- A lesson in Belizian streetfood: Belize City
- The pupusas from El Salvador: Suchitoto
- Mexican cooking classes with a Couchsurfer: Valladolid
- Malaysia's Food Capitals: Melaka & Penang
​​- 13 Strange Observations of South Korea
- Serbia’s throughout history… in Nis
​- Jordan, a destination on the rise: Extensive guides to Petra, Amman and Wadi Rum