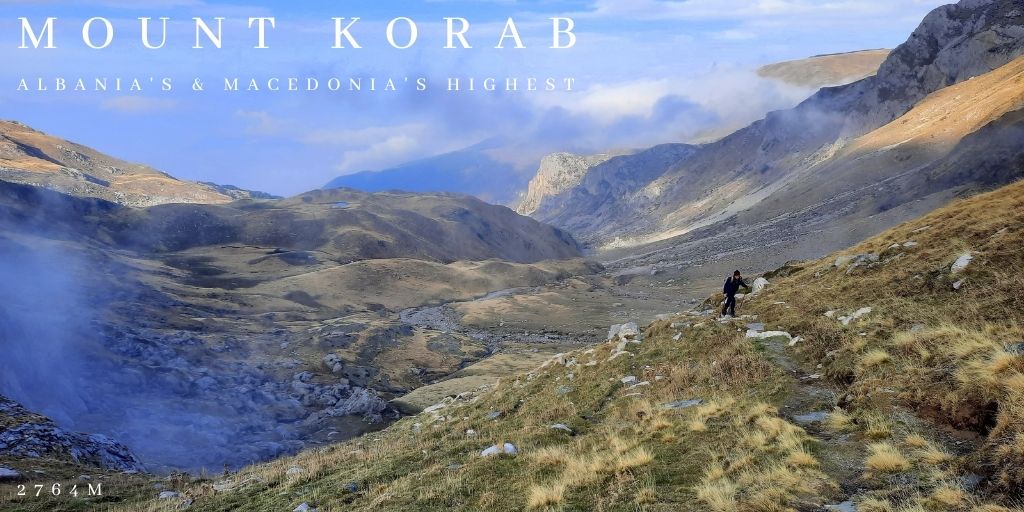 Not in the story-mood? Scroll down for the Quick Budget Fact Overview: an itemized information summary of Mnt. Korab & Radomirë! ↓
I can get pretty neurotic about certain travel traditions. At some point along the years-long journey, I started climbing every highest peak of every country I visited, and from that point on I considered it my duty. No one asked me to, nothing would happen if I let it slide for once… except of me feeling like I have to return one day to do it, in order to regain inner peace... so I might as well get it over with straight away. When it comes to Albania, that means you’re doing yourself a huge favour. Climbing Mount Korab (2764m) was the indisputable highlight of my month-long trip through Albania… a country where every day blossomed into a celebration on its own.

With Mount Korab, you’re double-winning. Not only will you be summiting the highest peak of Albania, but also the highest one of Macedonia (it’s even pictured in their national emblem). The rugged peak is part of the 555.5 km2 Korab-Koritnik Nature Park, which is renowned for its outstanding alpine terrain encompassing glacial lakes, canyons, caves, rivers and dense coniferous forests. Local fauna includes the brown bear, grey wolf, Balkan lynx and weasel, as well as some precious birdlife. Korab, which is both the name of its highest peak and the entire mountain range it belongs to (and the Slavic Sea God it’s named after), includes a long series of remarkably high summits compared to the rest of the Balkan. The entire mountain range stretches 40km all the way from Kosovo towards the southern Desha Mountains, along the Albanian-Macedonian border and Dibër Valley. And you are going to be a tiny element of all this grandness. 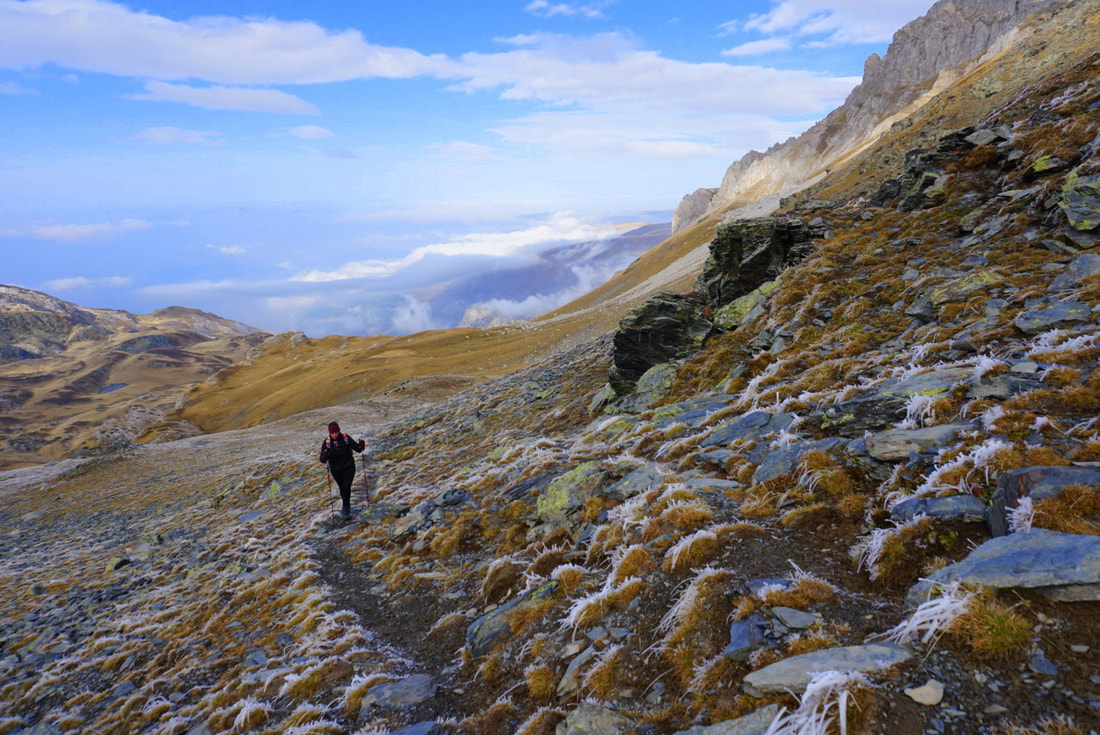 Too busy to read now? No problem, save it for later!
​Save on Get Pocket | Save in Browser Bookmarks| Save on Instapaper
Base

As the peak is located right on the border, you can climb Mount Korab both from the Albanian and Macedonian side. Honestly, Albania is your best bet, as on the Macedonian side there isn’t any village or mountain hut nearby where you can spend the night before and after: You will have to set up camp at the Strezimir Watch Tower in the Mavrovo National Park. In Albania, however, you can stay in Radomirë, which has several accommodation options.* Besides that, this small village is an experience on its own: It undeniably breathes the spirit of true Albanian countryside… Wooden rickety sheds, branch-loaded donkeys, and men smoking a cig while riding a horse sideways. Keep in mind that there are no supermarkets or ATM’s here, so it’s recommended to arrange your cash-outs and groceries before you leave either Kukës if you travel southwards, or Peshkopi when heading northwards. 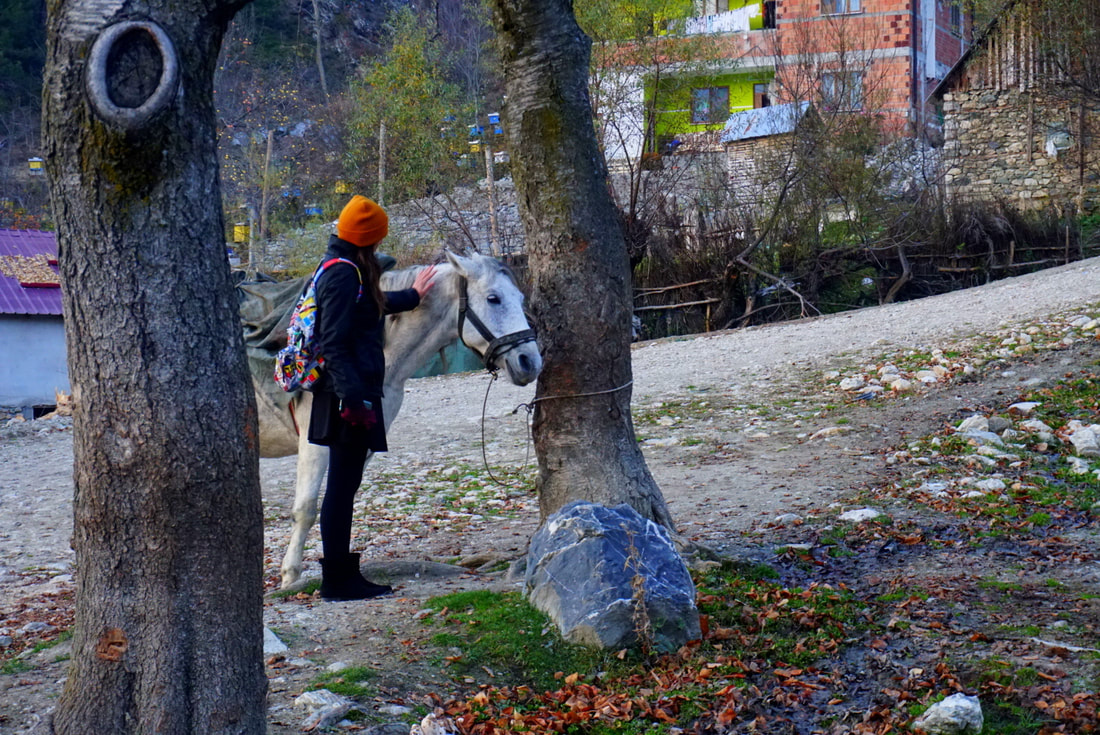 The infrastructure is very basic in certain parts of eastern Albania, and some stretches consist of bumpy dirt roads. At the time of writing there weren’t any fixed public transportation options, besides the very occasional minibus connecting Kukës, Peshkopi and the surrounding villages (time schedules non-existent). This narrows down your options to either hitchhiking or renting a car. For the sake of convenience and saving precious travel time, I strongly recommend renting a car, which is easy and budget-friendly in Albania. I have an amazing experience with Rental Shkodra, who provided me with a reliable vehicle and around the clock customer service during my entire roadtrip. With offices in Shkodër and pick-up possibilities Tirana, I could conveniently pick up the car upon entry via Montenegro, and drop it off in Tirana before heading out again. 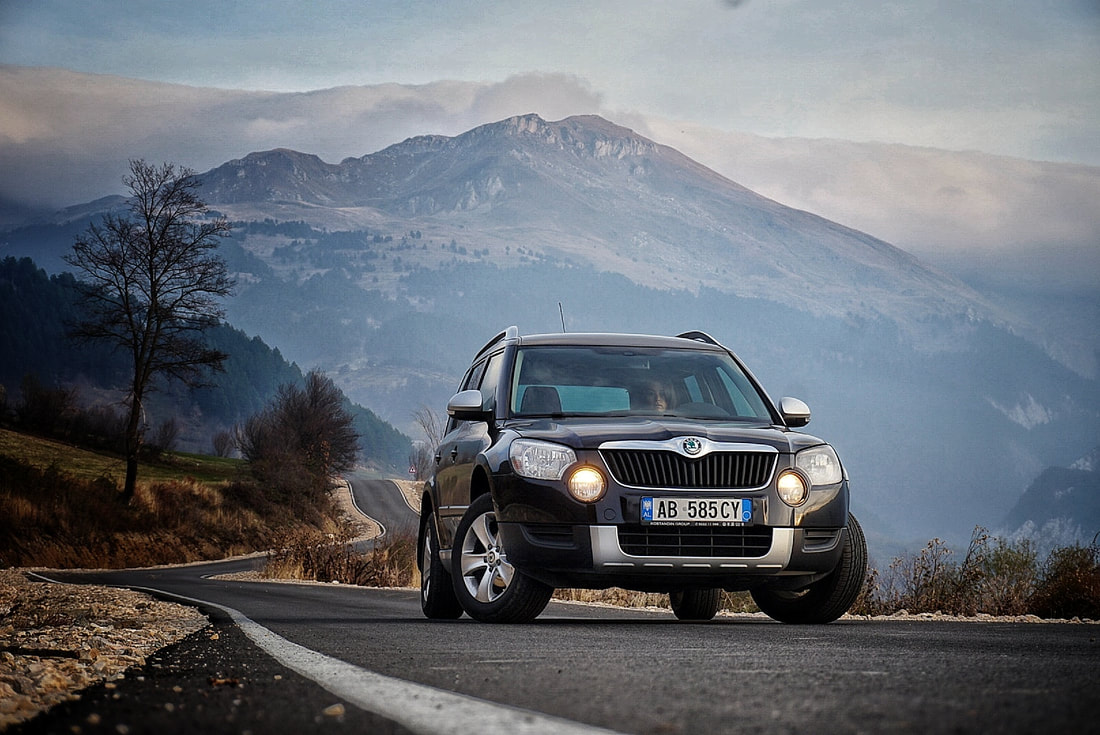 All photos so far by Miles Watson Photography.

Conveniently, the trail starts right next to Hotel Radomira. There is an alternative way, from slightly higher up in the village, next to where the short Black Lake trail starts (instead of left onto the Black Lake trail you continue straight). However, this trail-stretch is rather notorious for its aggressive dogs protecting the herds at all costs, so I won’t necessarily recommend it. The advisable trail starts off rather confusing in the very beginning, but becomes more obvious along the way. In any case of doubt, you can download the GPS-tracks in advance, as along the way phone signal can be limited. By any means, for this specific trail described within the hiking season you do not need a guide, even though the locals will try to convince you otherwise (that’s a source of income, so can we blame them?). If you attempt it to do it in winter or very snowy conditions, of course a guide will be recommended for safety reasons.
I walked the left (upper) trail, but you can also choose to walk the right (lower) trail... If I knew about this second route before heading out on the hike, I would have undoubtedly combined them into an exciting loop, as depicted on the map below (to be found next to Hotel Radimorë). You are now informed, so go for it: 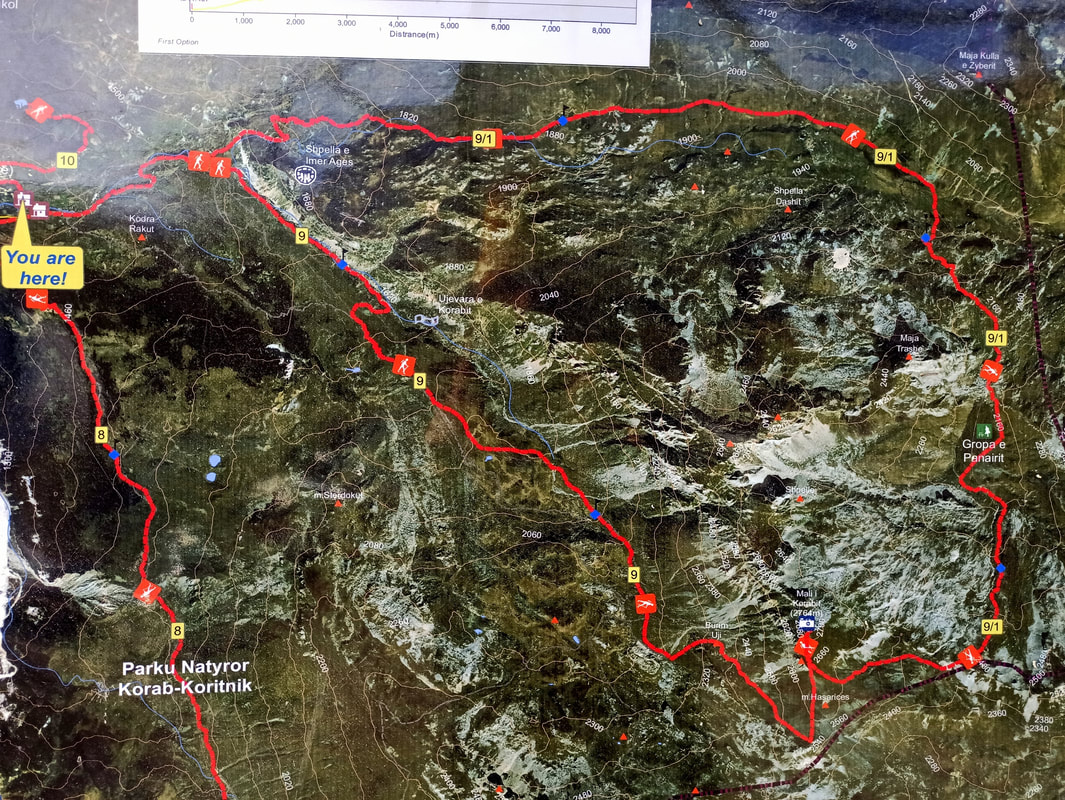 Check this route for climbing Mount Korab from the Macedonian side. Officially you need a special permit from the Ministry of Internal Affairs of Macedonia to do this hike at the Macedonian border… but it’s not that someone sits on top of a mountain all day to check that sole hiker that passes by every few days. In Albania, none of such paperwork is required.


The Mount Korab Track is every hiker’s wet dream. Deep colors, dramatic peaks, invigorating micro-climates, panoramic vistas the entire way through and the correct balance between a fair challenge and accessibility. Plus, the feeling of standing on the highest top of the country adds to the overall exhilaration and satisfaction – you did it!

If you loved Theth National Park, boy, be prepared for what Mount Korab has in store for you… it even tops (figuratively and literally) the glory to be found in Albania’s most beloved nature getaway. The relative remoteness and absence of thick tourist crowds allow for an even more meaningful and undisturbed interaction with nature: It’s between you and the mountains now.
Mind you, you need to be rather fit to do this. You don’t have to be an extensively trained mountaineer, but don’t take the kids and gran along either. I recommend only starting this endeavour when you have a decent amount of experience with mountain hiking (steep conditions), navigation and have been working out lately. That said, you don’t need any special climbing tools either, besides a solid pair of hiking boots with good profile, hiking poles and quality clothing for potentially all weather conditions: heat/sweating, cold, wind, rain, snow. In the mountains you can experience 4 seasons in a day, and the weather at the foot of the mountain isn’t representative for what is happening up there.


* 112 is the national emergency number, 129 is specifically for the police, 127 for an ambulance and 128 for fire. Save these numbers in your phone. Also save the phone number of the accommodation where you are staying.
Vibes of Radomirë

To be frank with you, nothing will beat the breathtaking surroundings of the Korab-Koritnik Nature Park in this eastern stretch of central Albania. That said, if you happen to drive along Kukës, you might want to get out for a quirky little stop. There’s not a whole lot to do here and tourism is definitely an unknown phenomenon (be prepared for some open-mouth staring), but the Ethnographic Museum and the Memorial Tower next door are worth a short visit… if only for the enthusiastic guide (I felt like we made his day by simply dropping in). When I checked this museum out, I witnessed a confronting photo exhibition covering the dire conditions of Kosovaran fugitives, housed in refugee camps here in Kukës during the Kosovo War. Another stop should be Hotel Amerika (where I spent the night): The peculiar design choices and unlikely color combinations are an attraction on its own. Taste is a personal matter, but we’ll all agree on this one.
Quick Budget Fact Overview 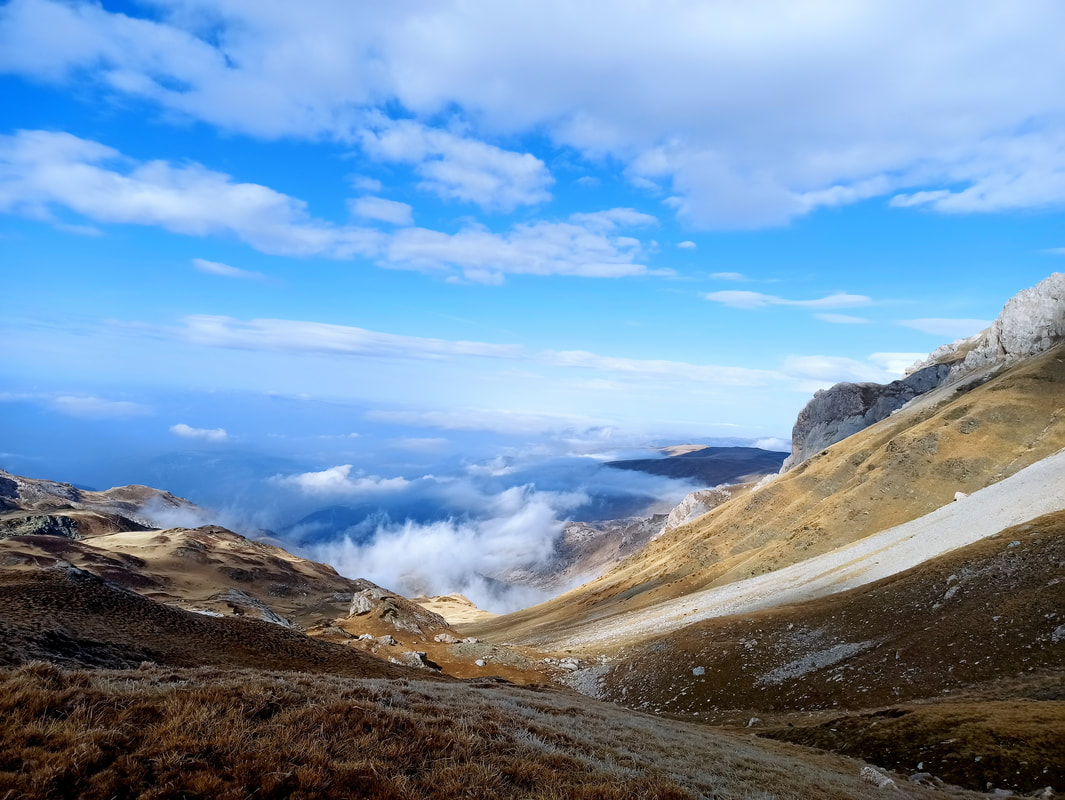 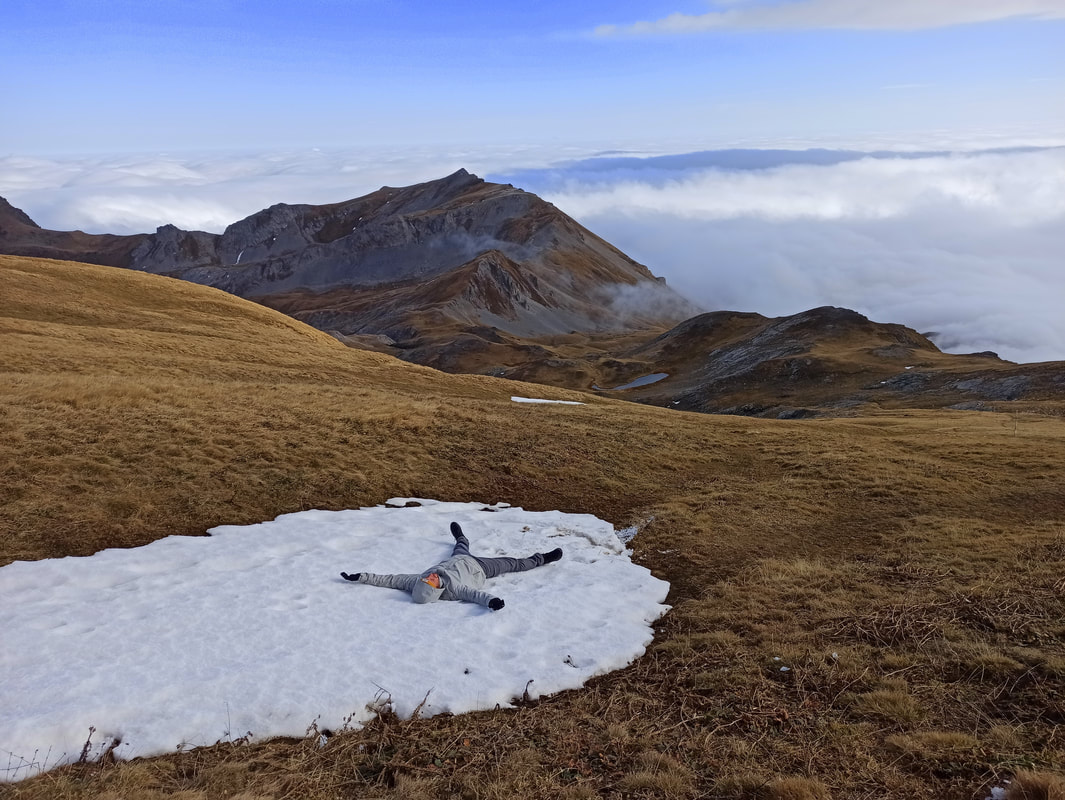 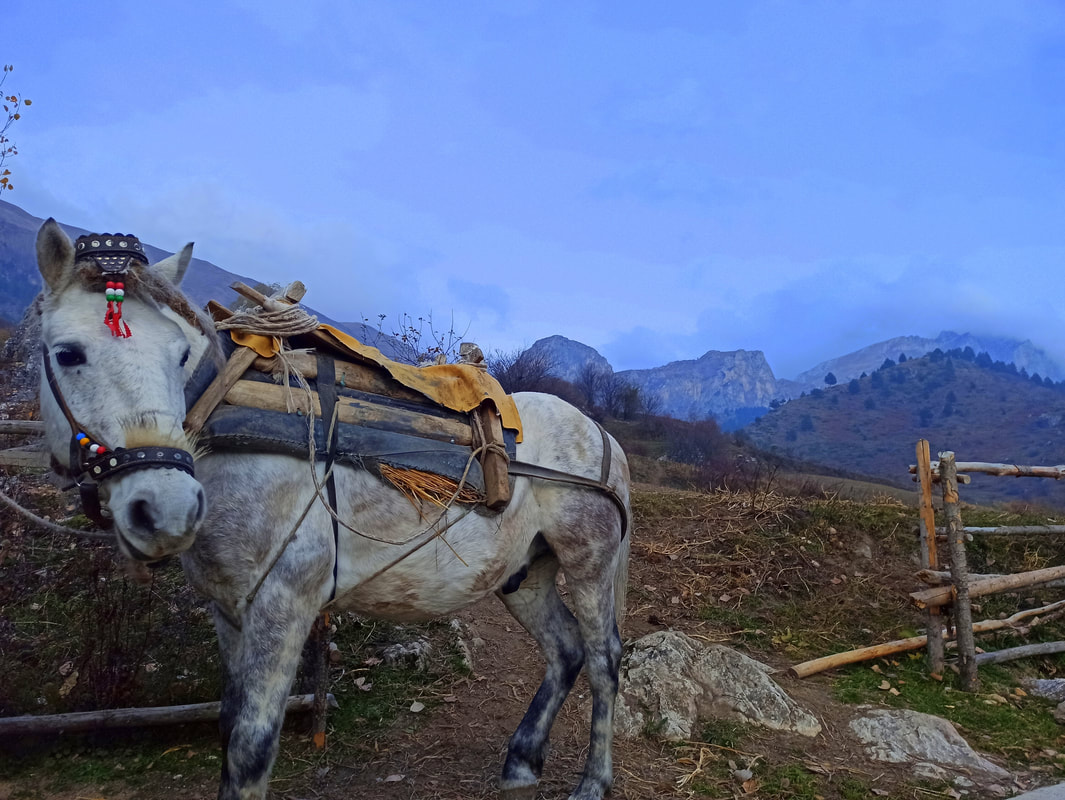 In order to support the travelers’ community, I spend many hours per week to adequately document all information and advices for prospective visitors, accompanied by a (hopefully) entertaining insight into my personal observations and experiences. This service is and will remain free. However, if you voluntarily want to make a contribution and support my travels and thus the creation of new stories and information supply, here is the button you’re looking for:
Donate
Related:
​- Get your Albania itinerary ready: Berat, Gjirokastër, Korcë / Ohrid Lake, Theth, Shkodër, Tirana, Mount Korab & the coast!
​​- Check out Budget Bucket List's FAVORITE HIKING DESTINATIONS worldwide!
- Visit Balkan's finest: Montenegro's National Parks Blog, Kotor Bay & Lovcen NP and Cetinje, Podgorica, Prokletije NP and Montenegro's Coastal Towns Blog
- 10 typical Dutch celebrations no traveller should miss out on
​​- History preserved: Time capsule of Romanian culture Maramures
- Be about Bulgaria: Check off Bansko, Belogradchik, Plovdiv, Sofia and of course Veliko Tarnovo!
- Where modern meets classic: Vilnius, Lithuania
​- 8 ways to save money in Vienna, Austria
​​- German gems: Aachen & Frankfurt am Main
​- Europe's best skiing & hiking: Get your ass over to jaw-dropping Switzerland!
​- Budget Bucket List hitchhike trip to... Kosovo!
- Unravel the mysteries of Serbia
​​- Discover the splendours of Turkey: Istanbul on a Budget & Reasons to visit Edirne