Download File
Everyone, but literally EVERYONE I talked with along the way, told me Lima was a terrible city to visit. I was however hoping for the La-Paz-effect: Setting my expectations extremely low and being completely overwhelmed. Because...

I’m quite the misfit and love stuff normal people hate. 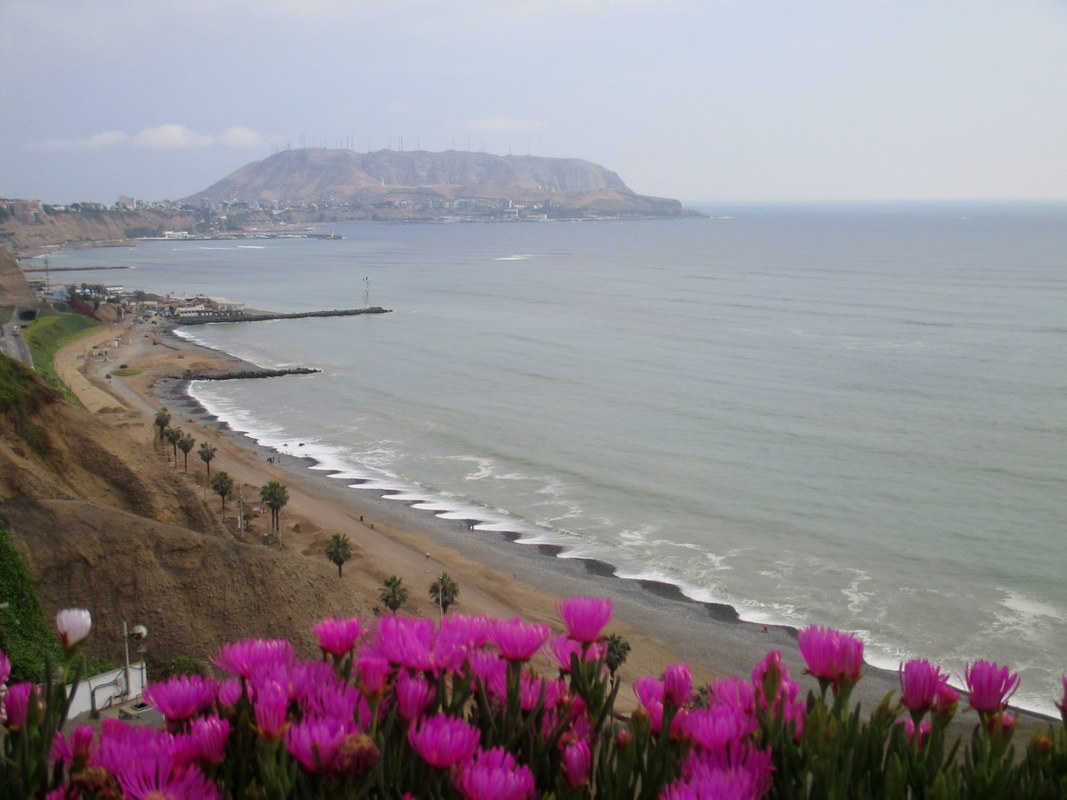 ​Before I got into the dirt-cheap local bus all passengers were filmed, as often robbers get on the bus and hijack it. Not unsettling at all. I am however convinced that there’s a bigger chance of robberies on the expensive Cruz del Sur tourist buses… at least, that’s what I would target if I would be a poor thief and in desperate need of some cash. When I arrived at 11PM (2,5 hours later than expected) after a marvellous time in the bus splashing cockroaches and fleas, I ran to the bar at the Pariwana hostel and downed some well-deserved shots. Straight away I spotted the English Heral, a guy I met before in Potosí and La Paz, and we decided to hit the bars. First observation of Lima: The nightlife works out fine. We got out of the club at broad daylight and I noticed people were already walking their dogs. 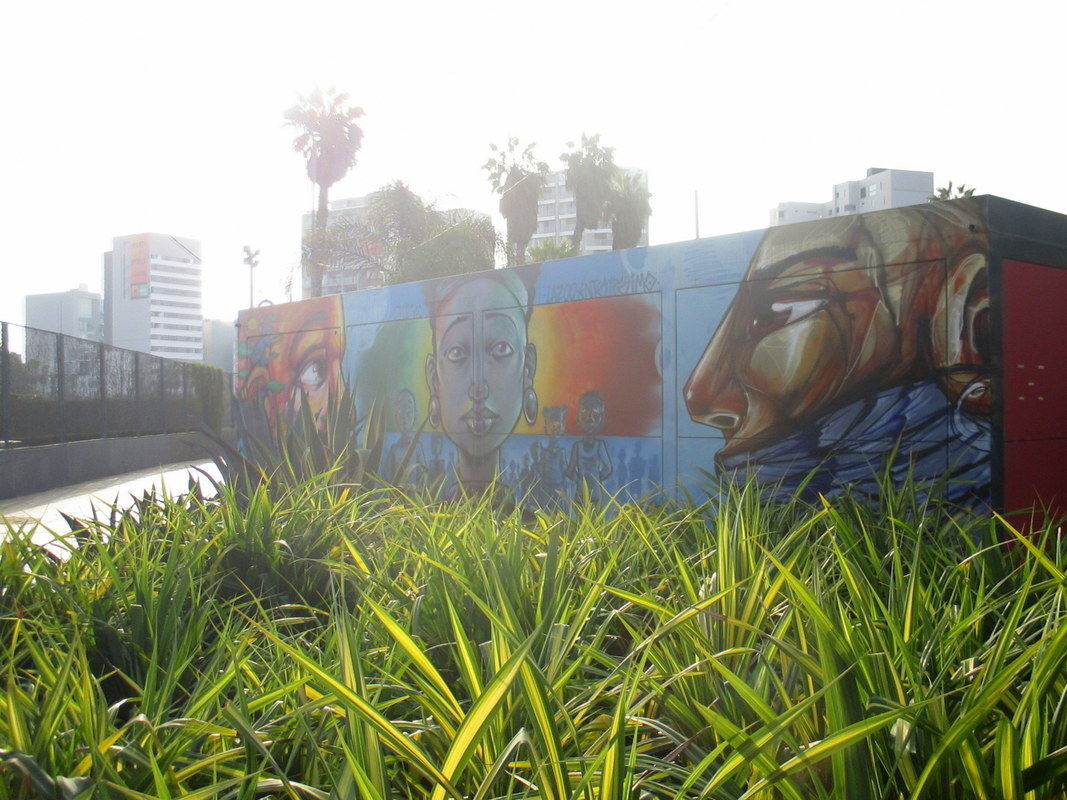 Remarkably fit I had breakfast three hours later and wrote down the long list of art museums I wanted to visit. What do you mean, Lima sucks? I started with a day in the bohemian Barranco area, where there were three interesting ones. I walked… 1,5 hours... because I am a woman and map-reading remains a challenge. Lima looks quite compact on the map, but really, it’s not.

It looked quite chilly outside so I had dressed well. Outside I found out the thick layer of smog covering the city was just blocking the sunlight, not the humid heat wrapping itself around me. So every block I took off another piece of clothing, while I glanced at some skydivers floating above this capital city. I wondered why, because this city has neither scenery nor charm. I recommend saving the skydiving for more scenic hotspots, like Slovenia, Brazil or northern Argentina where I did it. Nevertheless, the museums appeared to be absolutely world class. 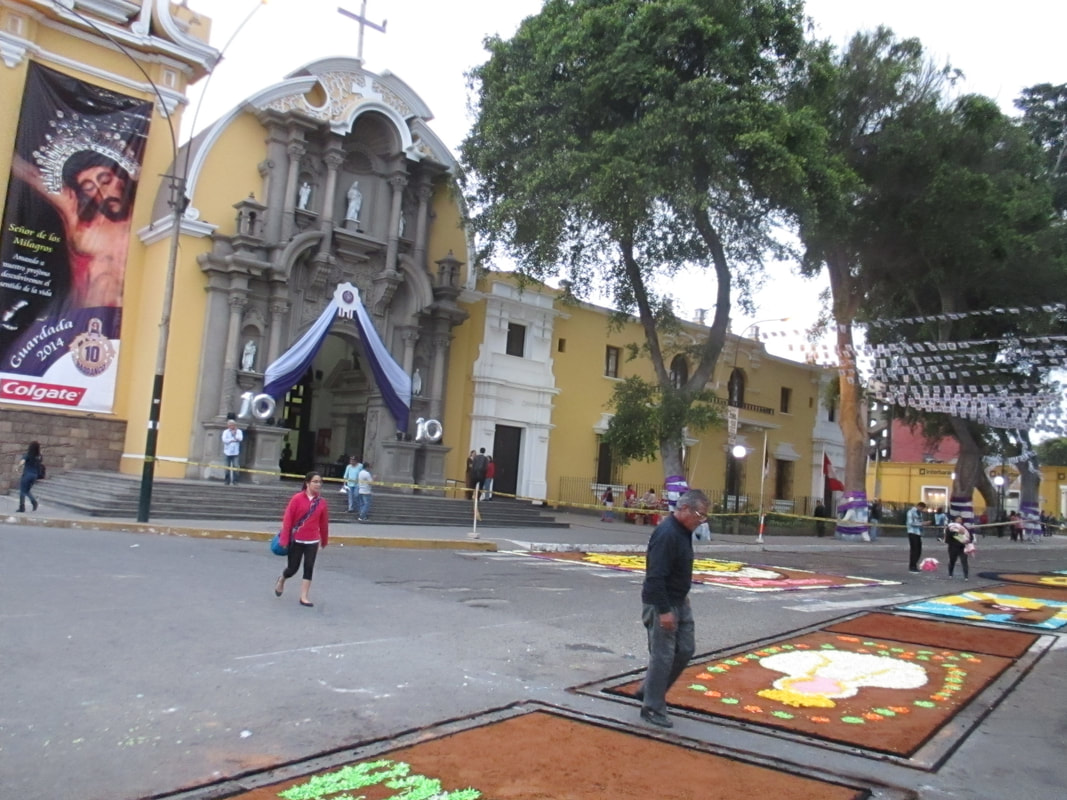 ​I started with Museo de Arte Contemporaneo, which was only 1 sol on Sundays, including a private guide. This guide, Pablo, enriched my visit with passionate stories about the permanent abstract collection and the temporary exposition about optical illusion. Afterwards he refused my tip as “he should pay me to talk about art to a beautiful woman”. And now he mentioned it, would I like to get a free guide in all the other art museums as well? What can I say, except of the stand-up-peeing I really prefer having the female sex.
​Next was the MATE Museum, dedicated to photographer Mario Testino who had Kate Moss, Madonna, Gisele Bündchen, Brad Pitt (all hot and sweaty) and Princess Diana in front of his lens, to name  a few. Again, this museum was excellent.
​Next door I found Museum Pedro de Osma, that unfortunately just closed its doors in front of me. Only its exterior already blew me away, so I decided to come back for this one. I ended the day with some chijaukay with arroz chaufa and kam lu wantan which I consumed cheaply just outside of the Barranco tourist strip. It’s part of the chifa kitchen, a fusion between Peruvian and Asian food. The best of both worlds, one might argue. I allowed myself a mazamorra morada for dessert, which I bought from a street vendor. However, my taste buds weren’t too pleased with this sticky sweet warm jelly covered with cinnamon. It did taste like Christmas though, which might be a good thing as the Christmas decoration and lights that bling in the Lima streets don’t really convince with 30 degrees. I need a white Christmas. Which I will for sure get in Colombia where I’m heading to. No, I didn’t just make that joke, sssht.
​The next day I joined the free tip-based walking tour, as that´s my thing. I searched all around the Parque Kennedy for 20 minutes to of course find out the tour took off right in front of my hostel. We took the Metropolitana (which is a bus) to the dangerous downtown and passed along the more historical highlights. It was alright, but I had better. The walking-tour-princess said.

I learned I have to get back to Lima during Liberation Week, as they then fill up the fountain at Plaza de Armas with pisco.

That could have been my idea.

Afterwards I hurried to the Centro Cultural Ricardo Palma to watch the free movie El Laberinto Del Fauno in order to practice my Spanish. I wondered why the place was invaded with old people either speaking with their hands while screaming, or carrying a blind-man-stick (sorry, is there a name for that?). My suspicions were confirmed soon enough. Not only was the Spanish movie subtitled in Spanish, every single move was described as well by a Spanish voice speaking as fast as choking gangster rapper talking through the whole movie. Well, I did get enough exposure to the language for sure. 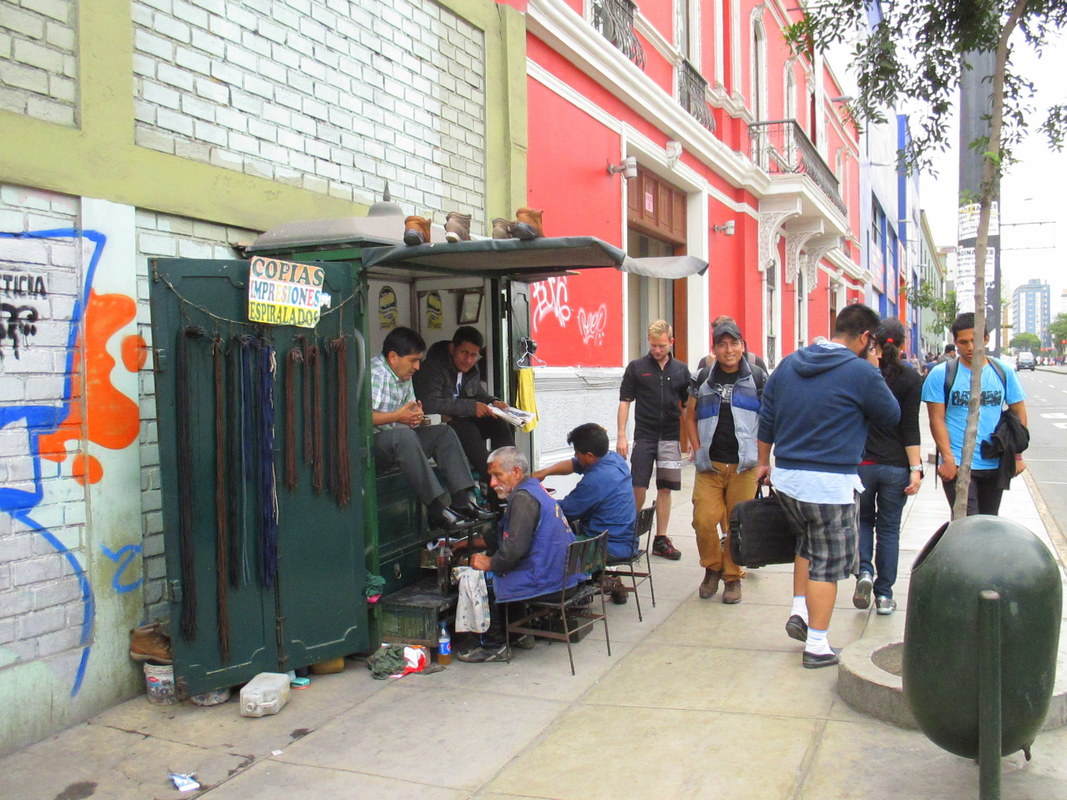 I deserved the expensive but delicious ceviche from the Punta Azul restaurant my travel friend Raúl recommended. Lima is making a real foodie out of me. The portion was so big that at some point it came down to perseverance. Me and my food baby met up with some Swiss, Canadian and Dutch folks I saw on the walking tour to play some serious Jenga. Really, with assignments like making a man-gina and knocking game-participants a bleeding nose while standing on your head we took this brick-game to the next level. 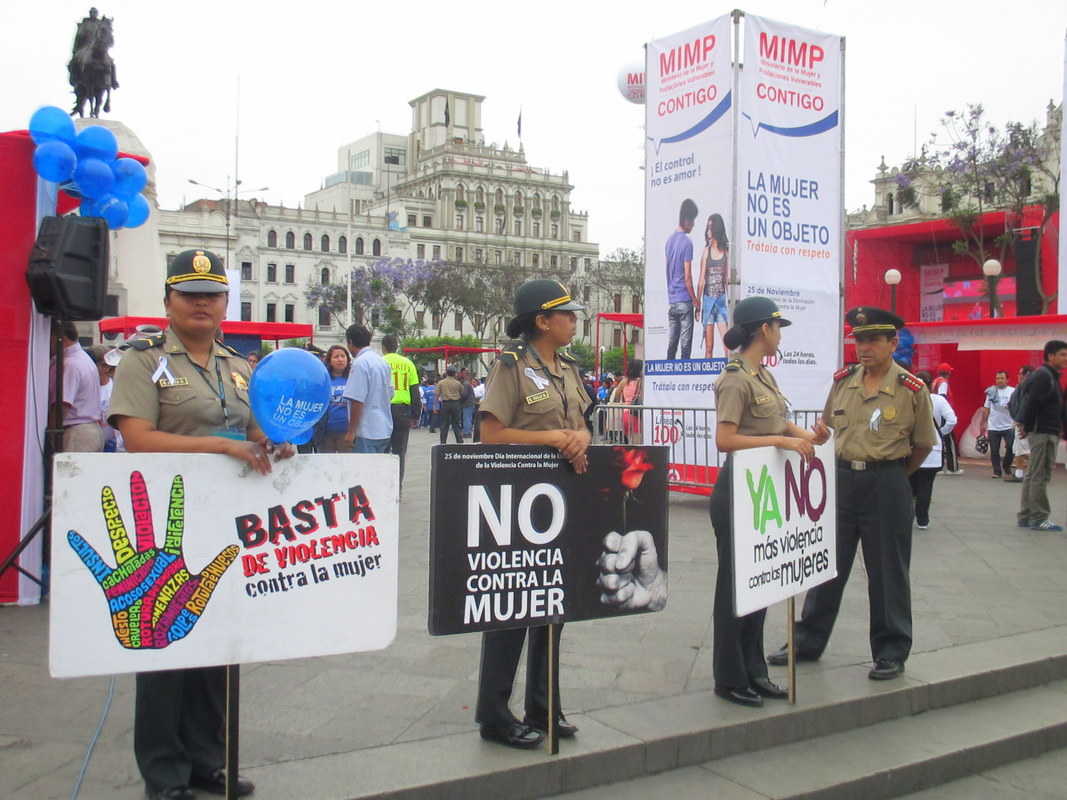 With all my money and electronics buried in my bra I took the public transport to dodgy downtown Lima the day after, far outside the safe upscale Miraflores area I was staying in. I promptly ran into a feminist manifestation with lesbian-looking women high-fiving me and offering me buttons that said “La mujer no es un objeto” (a woman is not an object). Well, oddly that’s exactly how I am feeling here in Peru. I usually feel like I’m walking down the streets naked, as literally every person with the tiniest bit of testosterone in his body just bluntly stares at me. While screaming, grunting or bumping their horns, most of the times. Especially here, outside of the beaten tourist path, I was the local attraction at the packed streets of crawling Limeños. Many men came towards me to warn me for the dangers of this area by night time (it was broad daylight though) and offered to be my personal escort. Although I rather be left alone I arrived at every downtown museum surrounded by a dozen of these unwanted bodyguards.
​
The first one being the Museo Arte de Lima (Mali), where 2 small expositions were set up.
The first one of gothic work from the Italian painters Perez de Alesio, Bitti and Medoro who arrived in Peru in the 16th century and triggered the ‘Cusco School’. These religious paintings without any spatial depth and lots of gold did not really impress me. Neither did the quite boring portraits of Gil de Castro, a former black slave that produced most of his work in the 17th century. The portraits of the liberators San Martín, Bolivar and O’Higgins did give some interesting historical insights though.
​
From there I walked the long way to the Museo Inquisicion, again followed by a parade of local men who I could luckily ditch at the entrance. This free museum was filled up with rather poor exhibitions summing up facts about the Spanish inquisition.
So I quickly took the metro back to the pretty Museo Pedro de Osma. This collection of luxury colonial villas was filled up with mannerist works, influenced by Italy and Flanders. Yes, religious stuff again, but this could be considered the crème de la crème of this genre. The many versions of the Virgin of Copacabana even reminded me of my hero Gustav Klimt. Que bonito!
The last day I spent on the roof terrace of my hostel, as the many impulses and sensations of this intense city exhausted me.

In a good way.
In order to support the travelers’ community, I spend many hours per week to adequately document all information and advices for prospective visitors, accompanied by a (hopefully) entertaining insight into my personal observations and experiences. This service is and will remain free. However, if you voluntarily want to make a contribution and support my travels and thus the creation of new stories and information supply, here is the button you’re looking for:
Donate
​Related:
- Where to next in Peru: Cusco, Machu Picchu, Huacachina, Huaraz, Cajamarca, Arequipa or Puno?
- Ayahuasca in Peru: Valle Sagrado
​- Capital cities in South America: Buenos Aires, Santiago, Quito, La Paz, Asunción, Montevideo and Bogotá
- The museums of Buenos Aires, Argentina
- City madness in Sao Paulo, Brazil
- Modern adventures in polluted San Jose, Costa Rica
- Dangerous or incredible? San Salvador, El Salvador
- Slowly falling in love with Quetzaltenango, Guatemala
- Yay or nay? Panama City...
- The ultimate Scandinavian citytrip in Copenhagen, Denmark
- The face of modernity: Frankfurt am Main, Germany
- Nature and culture in the capital: Edinburgh, Scotland
​- 8 ways to save money in Vienna, Austria
- Getting comfy in the Korean big smokes: Busan and Seoul
​- Discover Romania's enjoyable cities: Bucharest, Brasov and Cluj Napoca
- The slow charm attack of Serbia’s capital Belgrade​