Download File
On a terrace in Uyuni I gazed in the Lonely Planet for the first time on my trip and read:

“Bolivia is the country of superlatives; It’s the hemisphere’s highest, most isolated and most rugged nation. It’s one of the Earth’s coldest, warmest, windiest and steamiest places. It boasts among the driest, saltiest, and swampiest natural landscapes in the world.”

Cool, let’s do it, but where to start? While traveling I never plan anything and usually just randomly put up my thumb to see where it gets me. This time however I decided to join the French and German enclave of backpackers I met while traveling the Uyuni salt flats and grab the same bus to Sucre. So there I sat, 10AM in the morning, in a boiling hot rattle-bus without toilets for 7 hours, hugging my backpack on my lap, while the Ketchup Song was blasting out of the speakers. With wet arm pits I let the wide hilly landscape and self-built villages pass by and realized what poverty looks like. 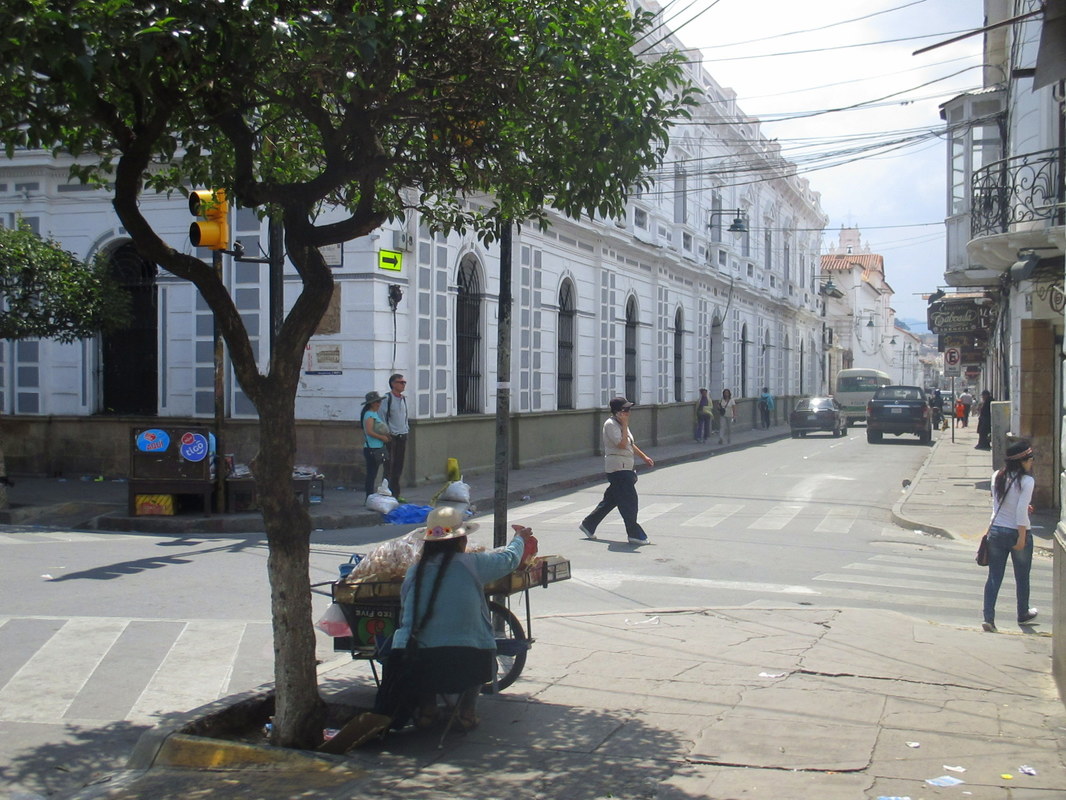 ​In a parade of 12 backpackers we headed to the city centre and checked into a party hostel. Luck was on our side they guaranteed us, as we arrived just in time for the bodypaint party that was organized that night. Although a proud Boliviano in the bus taught me a lot about the rich cultural heritage of ciudad blanca Sucre, all of that was instantly forgotten once the glow-in-the-dark bodypaint hit my face. And during a lambada competition while drinking coca-leaves-mojito’s upside down I didn’t even know in which city I was anymore. Yup, I even culturally sin sometimes. 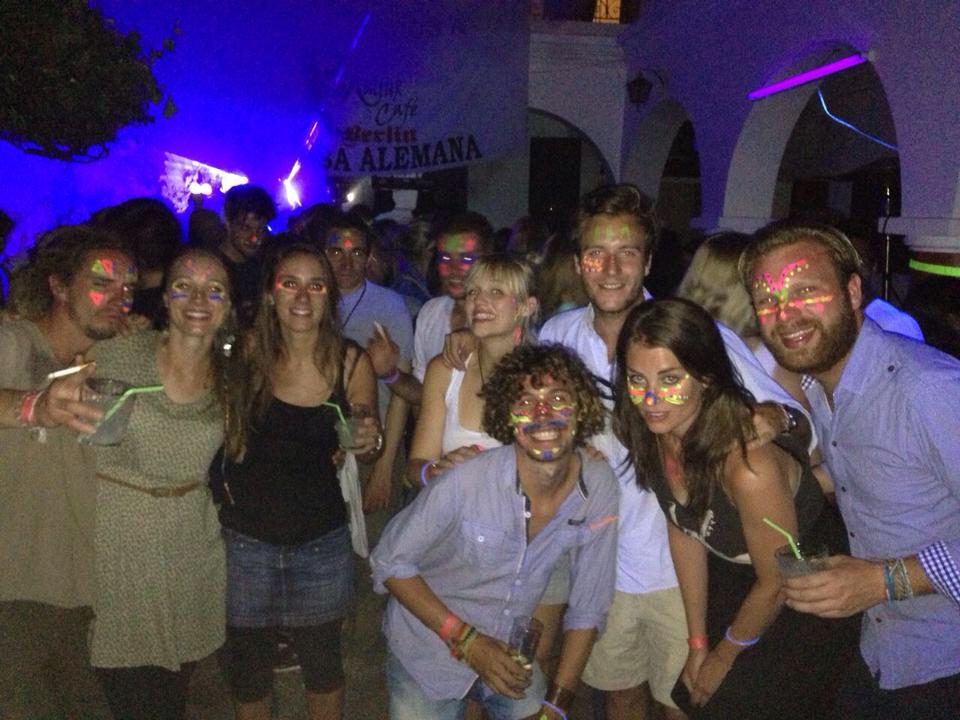 ​This sealed the deal for our second day in Sucre: The breakfast table was filled up with miserable looking people with bodypaint still sticking on their faces, breasts, legs and clothes. Although museums were still a bridge too far for my hung-over head, I forced myself to explore the city. With the hilarious American duo James and Spencer I climbed the steep streets to the Recoleta area for some nice views over the city. These sporty snowboarders told me about their plan to book a 3-day trek in the Bolivian mountains within 2 days, and I immediately decided to join in.
Although I went to bed early, I had once again a short night as a member of the French hot trinity (see the Uyuni blog), the prettiest one that I conquered by now, woke me up with his big brown puppy eyes. Bonjour monsieur. The reason however wasn’t quite the turn-on: When he walked home alone he was attacked on the street by 3 Bolivian thugs who tried to rob him.

Lesson learnt, once again: Bolivia is beautiful, Bolivia is an experience, Bolivia is dirt cheap… but therefore also poor, and sometimes dangerous.

So instead of wandering around the back streets like I usually do, the day after I stuck to the touristy area of Sucre and visited the Mercado Central.
I love markets. Nothing reveals a culture more than strolling around the veggies, herbs, textiles and in the case of Bolivia, death lama fetuses that go from vendor to seller. After I paid a few cents for a fresh coconut smoothie and a meal I never heard of before, I shared lunch with some talkative toothless women wrapped in their typical colorful woven blankets. Curiously I peeked into the big boiling pans to discover the origin of the sold lunches, and concluded people just swallowed a tender piece of dog meat. I’ve been there before, before my vegan years Vietnam fed me a wide arrange of domesticated animals, which shouldn’t make a difference anyway.

Animals are animals, and if you cruel enough to pay others to kill them just for your pleasure of taste, it shouldn’t matter if they’re cute or not. So what would it be for you mister, a tender piece of cat or some fresh dog-meat? 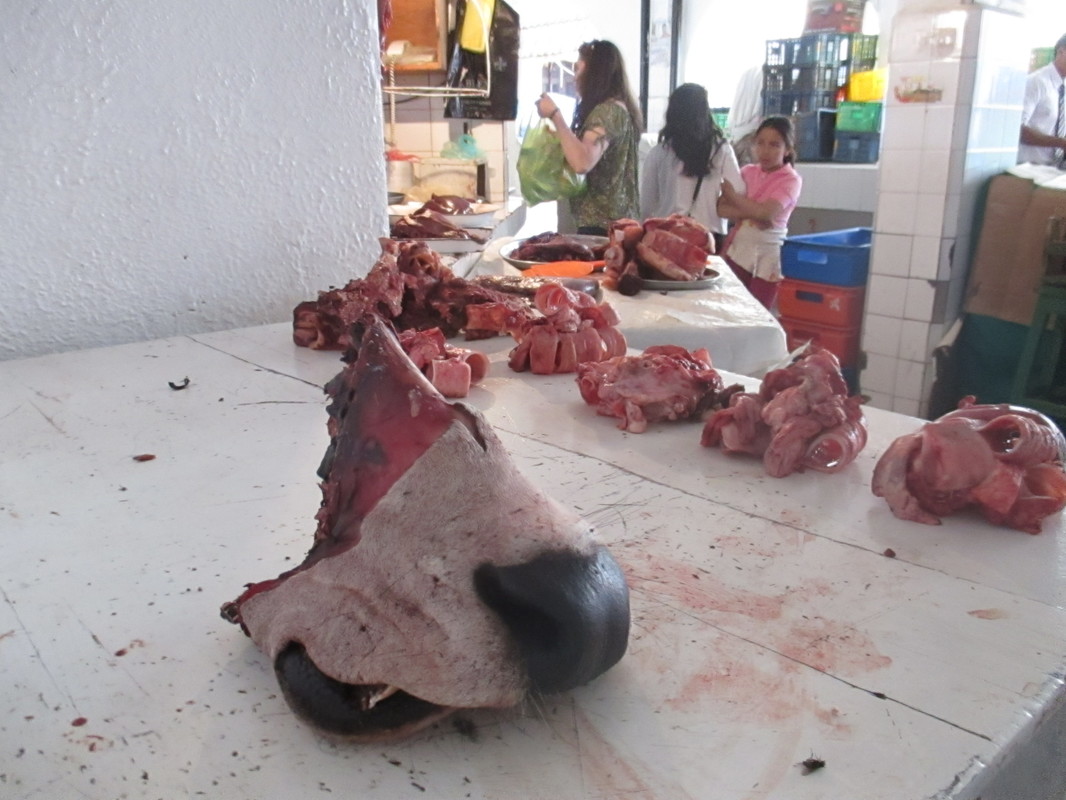 After I roamed the market for some coca leaves to beat the altitude sickness for the trek the day after, I decided wisely to not make any plans for that night and go to bed early…

But then at 7PM my group of French and German travel-fella’s invited me for dinner. Well, just dinner wouldn’t hurt right, what can go wrong with that? Just go straight to bed afterwards. Theoretically this is all reasonable. However, somewhere between happy hour and my necessary 5:30AM alarm something went terribly wrong. I don’t remember the time I got back to the hostel. I do remember throwing up 3 times and passing out on the floor. I just can’t handle Sucre. Some high force really wanted me to go on this trek though, as although I forgot to set the alarm I miraculously woke up at 5:45, feeling like I’ve been dragged around town under the wheels of a bulldozer. Of course I didn’t pack my bag the night before, so I woke up the whole dorm while frantically brushing my teeth, putting clothes on and at the same time rushing around the room in search for my stuff with a torch in my mouth. This was definitely not my happy hour. 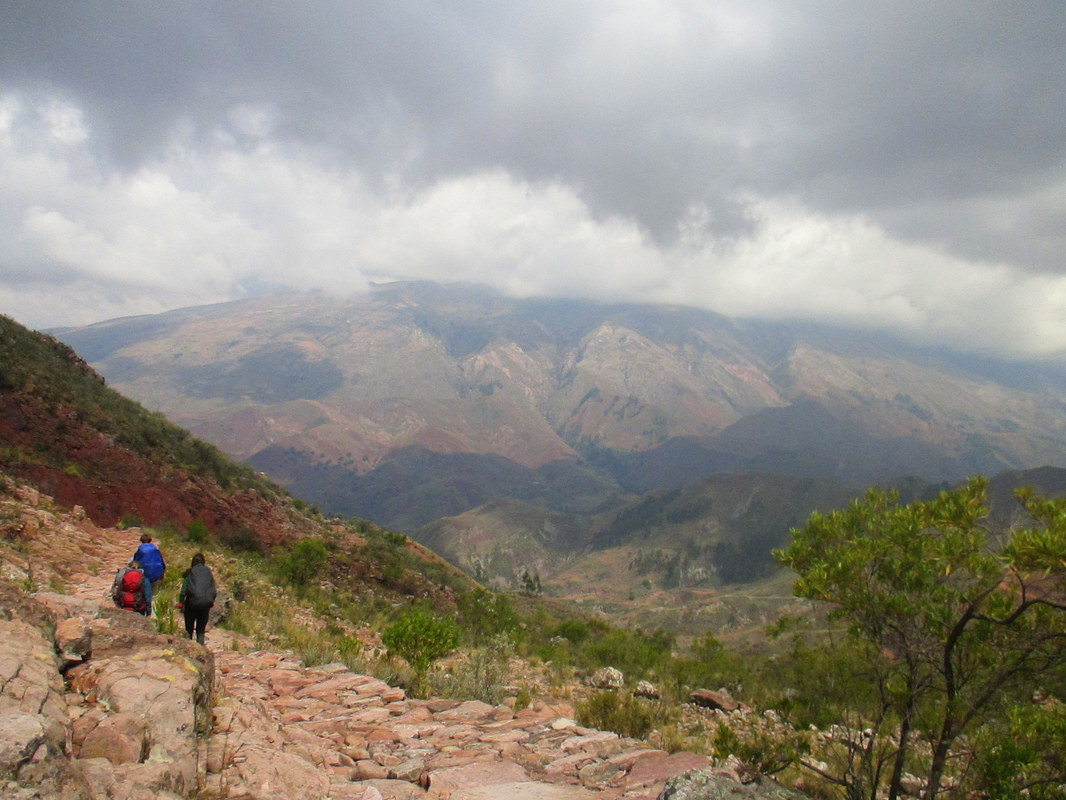 ​So white, trembling and looking the worst I ever did I followed Spencer and James to the jeep that would drive us to the mountains. After the Condor Trekking jeep broke down twice, we got out to have breakfast in the rain. Rain turned into hail, and while I put on all the clothes I took with me I wondered where the hell I have gotten myself into. Into a pretty epic trip, I realized when we walked down the Bolivian Inca trail and let the overwhelming views sober me up.
My own body amazes me sometimes, as I endured the walk from 8:30AM to 5PM with my alcohol-affected body and mind. And I’m not talking about comfortable asphalt roads my friend: Bumpy, uneven, steep off-roads (while carrying a gigantic backpack filled up with food and water) brought us to our cozy cabañas. After an ice cold shower and a fulfilling dinner we followed our only-Spanish-speaking guide Joaquin to the crater and a rock that looked like a devil’s mouth.
​Then I passed out into a 9-hour sleep. The next day I felt reborn and tightened up my trekking shoes for another 18KM trek. After northern Chile and southern Bolivia I am somewhat spoilt when it comes to overwhelming gorgeous landscapes. So I honestly have to admit that these minery landscapes were not the prettiest I ever saw, but still: Europe has nothing on it. The wide, weird, pastel-colored scenery makes you light-hearted. The weather was on our side this day, and merrily we walked past (and through) waterfalls, valleys and dinosaur feet. 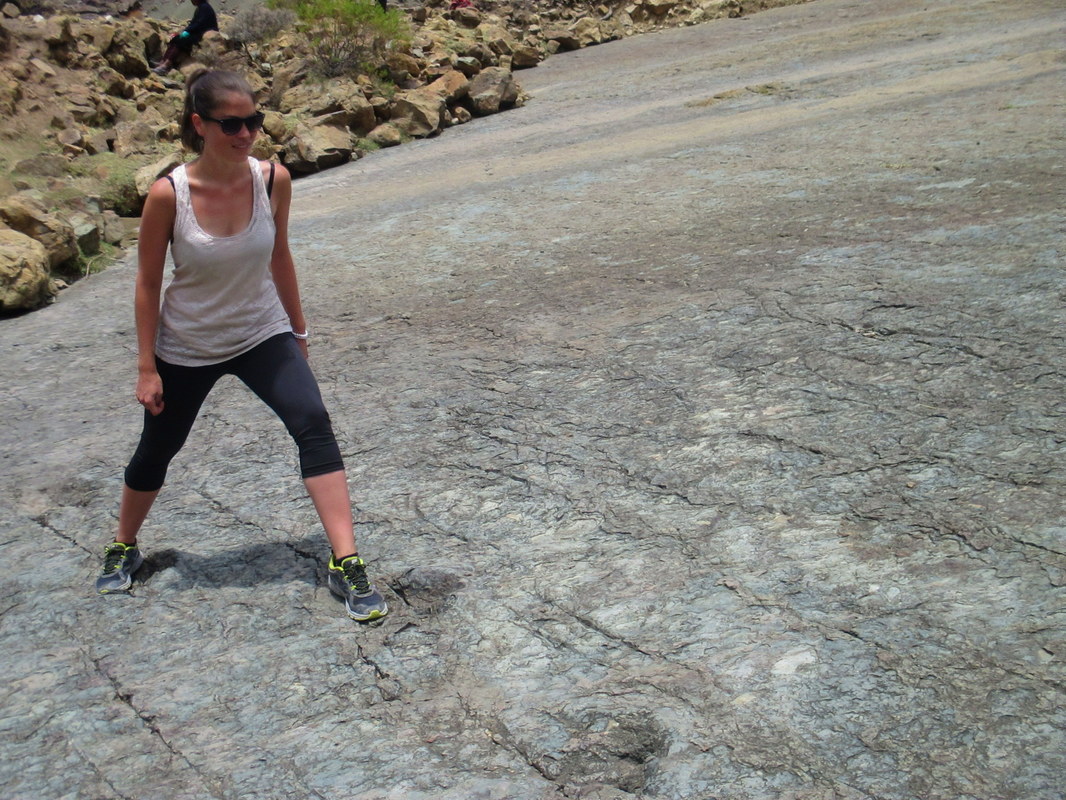 We arrived in a village built with clay and hay, and I saw indigenous people riding the dirt roads on their horses and carrying their load on donkeys.

So this is what travelling in the Middle Ages must have been like: walking through fields and mountains for a day to the next village and being welcomed by a scene like this.

This is real, this is unique, this had passed the rigors of time. On this we toasted many times with some bad Bolivian wine (sorry, this is not Argentina), until we heard the roosters announcing the morning sun.
In order to support the travelers’ community, I spend many hours per week to adequately document all information and advices for prospective visitors, accompanied by a (hopefully) entertaining insight into my personal observations and experiences. This service is and will remain free. However, if you voluntarily want to make a contribution and support my travels and thus the creation of new stories and information supply, here is the button you’re looking for:
Donate
Related:
- More hiking in Bolivia: Sorata
- Mountainbiking the Death Road in Bolivia
​- Check out Budget Bucket List's FAVORITE HIKING DESTINATIONS worldwide!
- Outdoor lover? Head down to Ecuador and don't miss Banos
- More tropical hiking in Jardín, Colombia
- Back to nature: a wooden cabin in Los Alerces National Park, Argentinean Patagonia
- Getting lost in the undiscovered forests of Brazil: Itatiaia National Park
- Camping and trekking in southern Patagonia: Torres del Paine, Chile
- Off the beaten path in Peru: trekking in the northern Andes
​​​- The green treasures of Costa Rica: Monteverde, Tapantí National Park & Tortuguero National Park
​- Visiting the national parks of Belize: Belmopan & Sarteneja
- Hiding in the woods: the non-touristy Mols Bjerge National Park, Denmark
- Hiking the Highlands: Glencoe (West Highland Way) and Isle of Skye, Scotland
- Nature in Lithuania, the best of the Baltics
​​- Lush, beautiful and with the bluest waters: Northland, New Zealand
​​- How it almost went wrong... hiking the rough peaks of Arthur's Pass [New Zealand]
​- Jungle-hiking in Borneo: The national parks of Kuching, Malaysia
​- Colonial city in Peru: Arequipa
- Colonial city in Argentina: Salta
- Colonial city in Uruguay: Colonia del Sacramento
- Colonial city in Colombia: Cartagena
- Colonial city in Ecuador: Cuenca
- Colonial cities in Brazil: Ouro Preto and Paraty
- Colonial city in Guatemala: Antigua
- Colonial cities in Nicaragua: Granada and Léon
- Colonial cities in Mexico: Merida, Oaxaca, Puebla and San Cristobál de las Casas
​​- Diving into Malaysia's history: Melaka
​- Korean culture at its finest: Explore Gyeongju!
​- The prettiest historical town in Romania: Sighisoara!
​- History preserved: Time capsule of Romanian culture Maramures