Download File
Yes, I know. You heard everyone falling over each other to hysterically promote the splendours of New Zealand’s southern west coast. Instagrammers, travelbloggers, media marketing campaigns, they just can’t get enough of the magic of Fiordland, the Southern Lake District and the West Coast.

Maybe that’s what you should do indeed if you only have 2-4 weeks to explore this magnificent country, like a big majority of the tourist crowd (which is a ridiculously limited time frame to start with if you don’t want to merely scratch the surface). But do realize you’re missing out big time.

The other side of the southern tip has a great deal to offer. 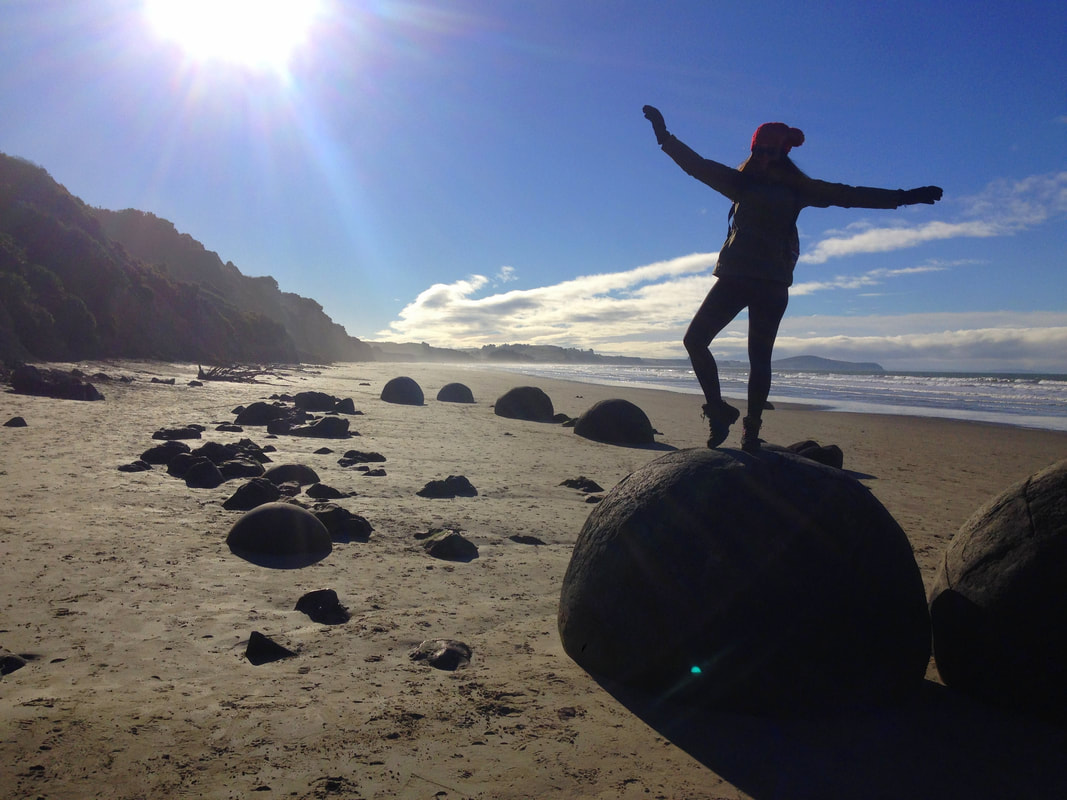 Oamaru
​
Let’s start just a few hours south of Christchurch, at the medium-sized town of Oamaru. Initially it was just a name on the map for me. It existed, so why not go there? However, to my pleasant surprise I discovered it had a whole lot in store for the curious traveller. A slow stroll around town caught my immediate attention. That architecture, it just seemed so... odd. Like you were thrown back in time a few centuries, walking on a set of a Tim Burton movie.
But it didn’t stop with the buildings... the people were dressed post-medieval as well, equipped with crossbows and jade-encrusted swords. Did I accidentally enter a time-gate and got shot back a handful of decades? Possibly, but in this case it was the Steampunk NZ Festival I had randomly ran into. Steampunk is a subgenre of ‘science fantasy’ incorporating technology and aesthetic designs inspired by 19th century industrial steam-powered machinery. Fans of the genre often feature anachronistic technologies or retro-futuristic  inventions, just as the people of the 19th century might have envisioned them, in their clothing, art and architecture. Oamaru has embraced this style as their distinctive city marketing asset, transforming it into the national Mecca of the local Steampunk movement.
​
Talking about excellent timing:
This day I learned that teapot-racing is in fact a thing:
Besides Steampunk, the Oamaru harbour forms the end (or the beginning) of the Alps 2 Ocean Cycle Trail and you can witness a blue penguin colony come ashore every night after paying an excessive entrance price (or you can go literally anywhere else at the southern east coast to see the same thing for free). Oamaru, I’m embracing its delightful weirdness!
Moeraki Boulders

Thirty minutes down south you stumble upon the tiny township of Moeraki, which you probably could’ve skipped if it wasn’t for the unworldly ‘boulders’ to be found on its beach. The unusually large and round rocks were shaped by erosion... or for the nerds among us: by the cementation of the Paleocene mudstone of the Moeraki formation from which they have been exhumed by coastal erosion. The main body started forming in the prior marine mud of the sea floor, proofed by the found fragments of magnesium, iron, oxygen and carbon. After the formation of the concretions large cracks (septaria) formed, subsequently filled up by calcite, dolomite and quartz once a drop in sea level allowed fresh groundwater to flow through the mudstone enclosing them. It took the large boulders approximately 4-5.5 million years to grow.

Nowadays they still sit along the shore creating an almost extraterrestrial sight.
For an extra bonus: Follow the small road towards the lighthouse to spot the occasional little penguin or yellow-eyed penguin, an endangered and hardly found species, and an always-present fur seal colony. The lucky bastards among us might even spot a dolphin. 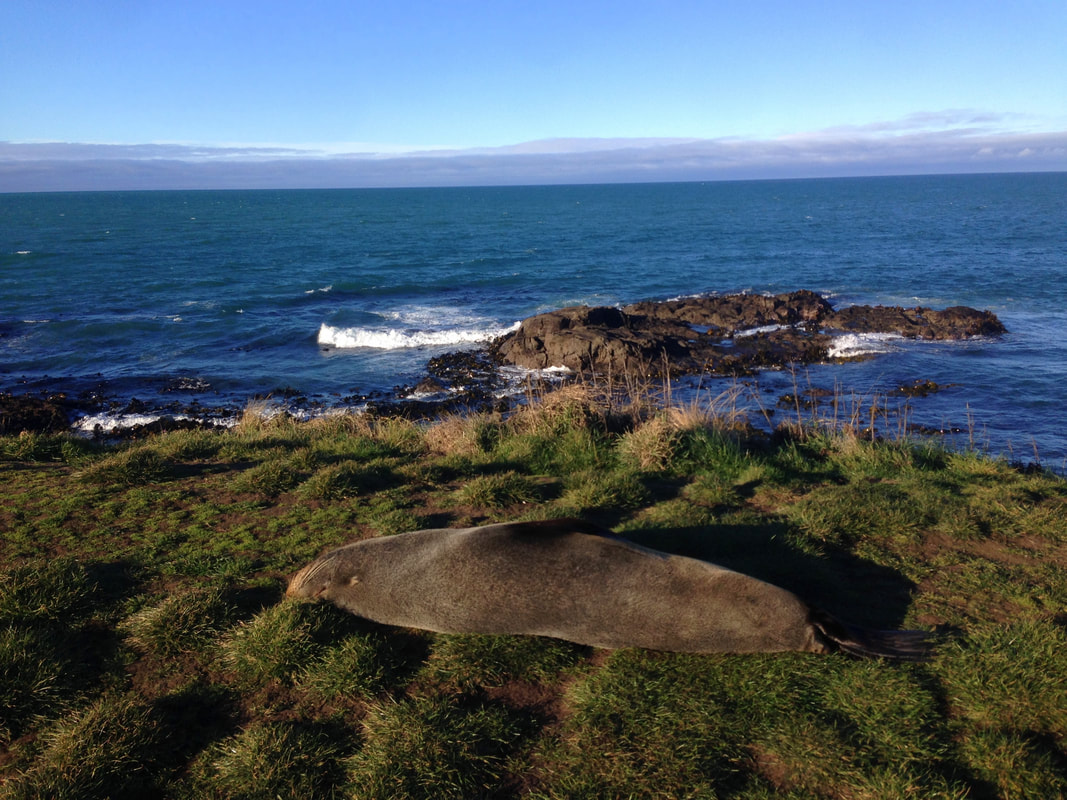 I stayed in the hamlet of Hampden, where I rented my own little caravan at the Moeraki Boulders Kiwi Holiday Park (equipped with 10kg of blankets and a heater – crucial). A true gem! 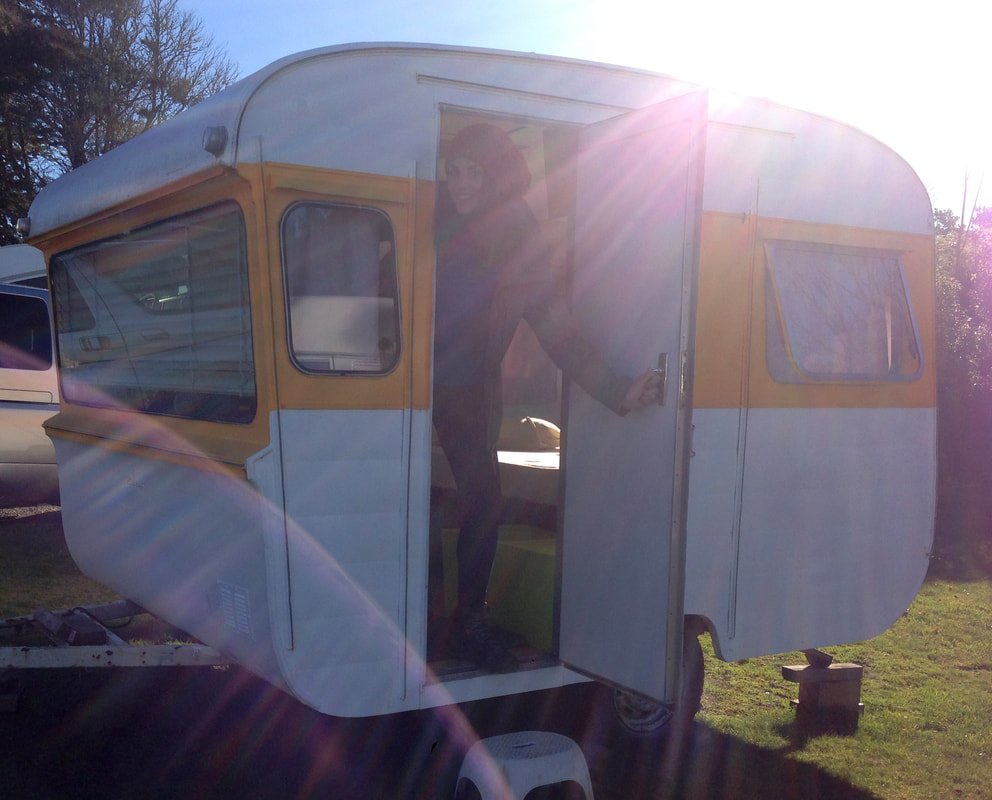 From here you’re only an hour away from the bustling student town of Dunedin. This ride was lightened up by the adventurous stories and loud laughs of a world citizen called Dylan, eager to take me over the scenic route along the coast towards Port Chalmers, driving me all the way over the swirly road to Aramoana looking out over Albatross Point (another NZ wildlife-hotshot). Seals and sea lions were on the menu again that day! (not literally of course, I’m not an Eskimo... ehm Inuit).
This meant I immediately checked off the most interesting part of this city. I’m not implying the town itself isn’t worth a look: its street art, vibrant bar- and restaurant scene and architecture definitely caught my positive attention. Some will even go as far as implying it’s the “Edinburgh of the South”, but let’s tone the arrogance down a notch, shall we? When it comes to managing expectations exaggeration is never a good idea. Dunedin certainly is a comfortable, pleasant town to live in, especially if you’re a student, but a day or two are sufficient from a touristic point of view.
To uplift the mundane to a more exciting degree I stayed with Couchsurfer Jackie, a not-so-average and therefore oh-so-interesting human-being showing me how to bring kittie-love to the next level: Not only did she watch Cat-TV on designated YouTube channels on a daily basis, she had her cats eternally engraved in her skin by means of tattooing, body carving (with knifes!) and skin-freezing. Miauw! In between the cuddling and purring she managed to show me around the inner-city highlights such as the sizable botanical garden, the university, the (free) Otago Museum, its (not-free) Planetarium and the so-called “World's Steepest Street." 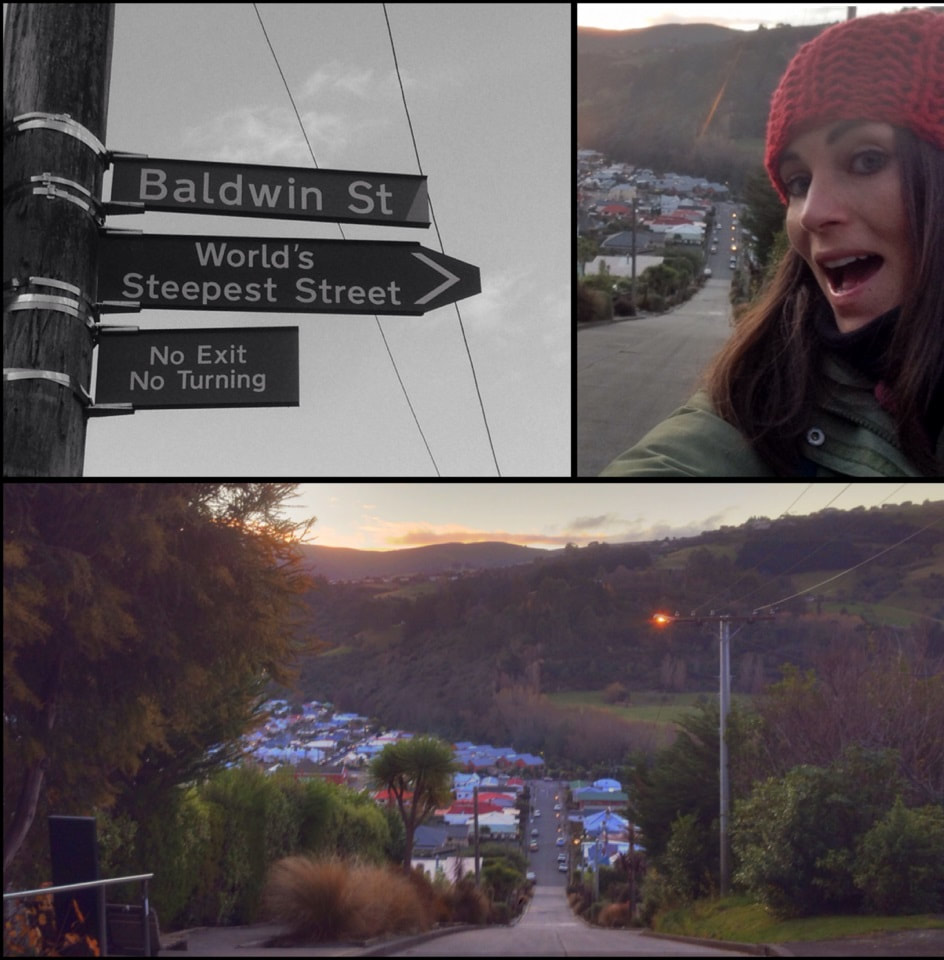 Finishing the south-eastern coast with a bang! Kaka Point (which sounds funny in Spanish) was special in many different ways. The most prominent factor was unquestionably the supreme level of hospitality that kept me warm like a comforting cloak. Not only was I hosted by a kind Frenchman inhabiting a comfortable yet freezing cold residence scenically overlooking the roaring sea, among the numerous hitchhikes that brought me here I randomly met probably the kindest couple of the entire village: Dave & Pauline. 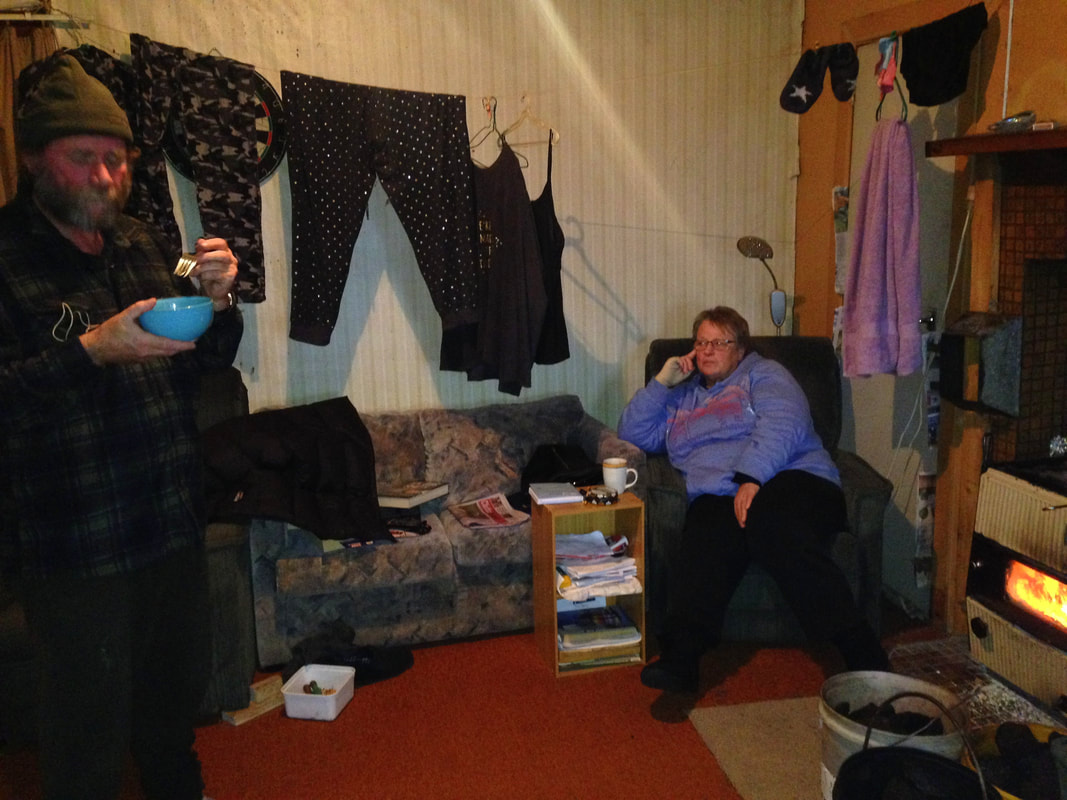 Every day they invited me over to warm me up with hearty soup and creamy coffee, energizing me for the sightseeing tours they were more than eager to take me on.
​
Thanks to Dave I had a live encounter with the earlier mentioned yellow-eyed penguin, a rare sight due to its endangered status. After a bumpy  4WD-voyage right over the smooth beach we clambered along the rugged shore line south from Fisherman’s Camp to witness these wild animals get ashore before sunset. Nature at its finest. 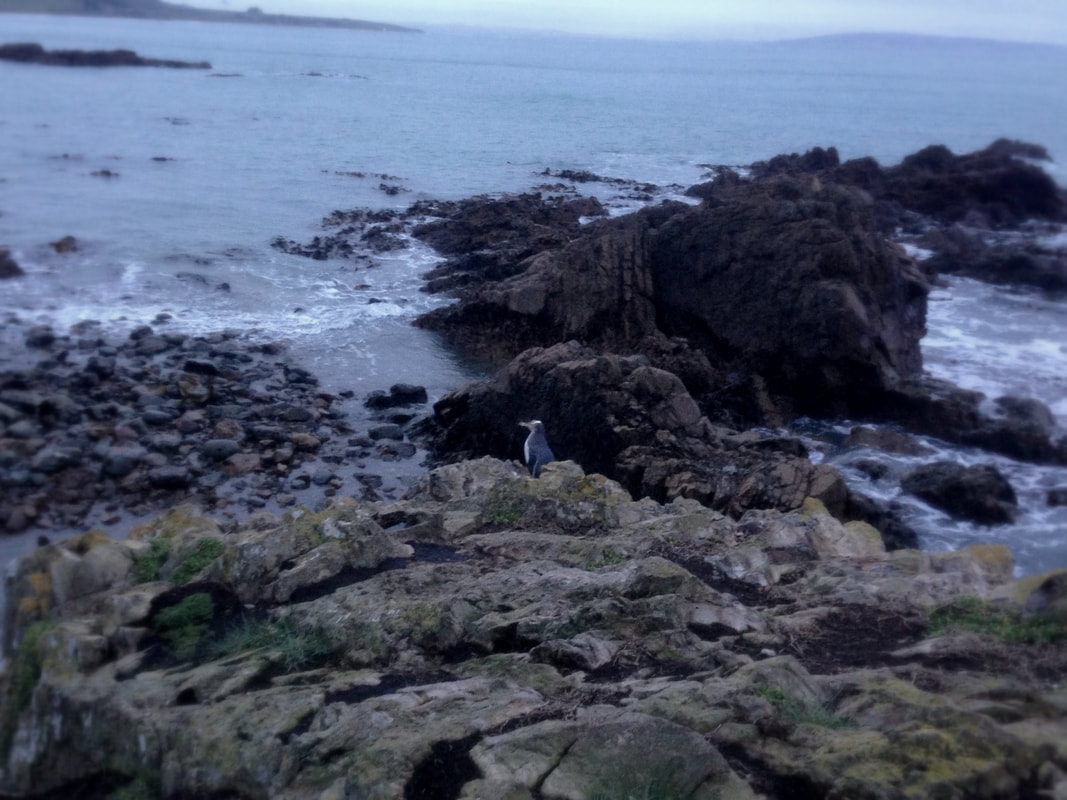 Another interesting excursion is Nugget Point, reached by a track towards the lighthouse. McDonald’s ruined me forever, but the vegan version of a nugget is in this sense a giant chunk of rock, offering a spectacular sight over the Southern Pacific and across the stretched out shore full of color and emerald-green vegetation.
Yes, Kaka Point is a magical place. But simultaneously the gateway to another natural wonder: The Catlins Forest Park, a lush conglomeration of earthly wealth and greenery.

I had to build up the tension for a few days as frost and snow storms kept me at bay, but on the last day I crossed it in a most adventurous manner. Never during my entire time spent in New Zealand I had to wait so long for a sequence of rides during my hitchhiking-way-of-travel, but that also indicates another exciting factor: in this season there’s hardly anyone there! The Catlins are available for a nearly private exploration! 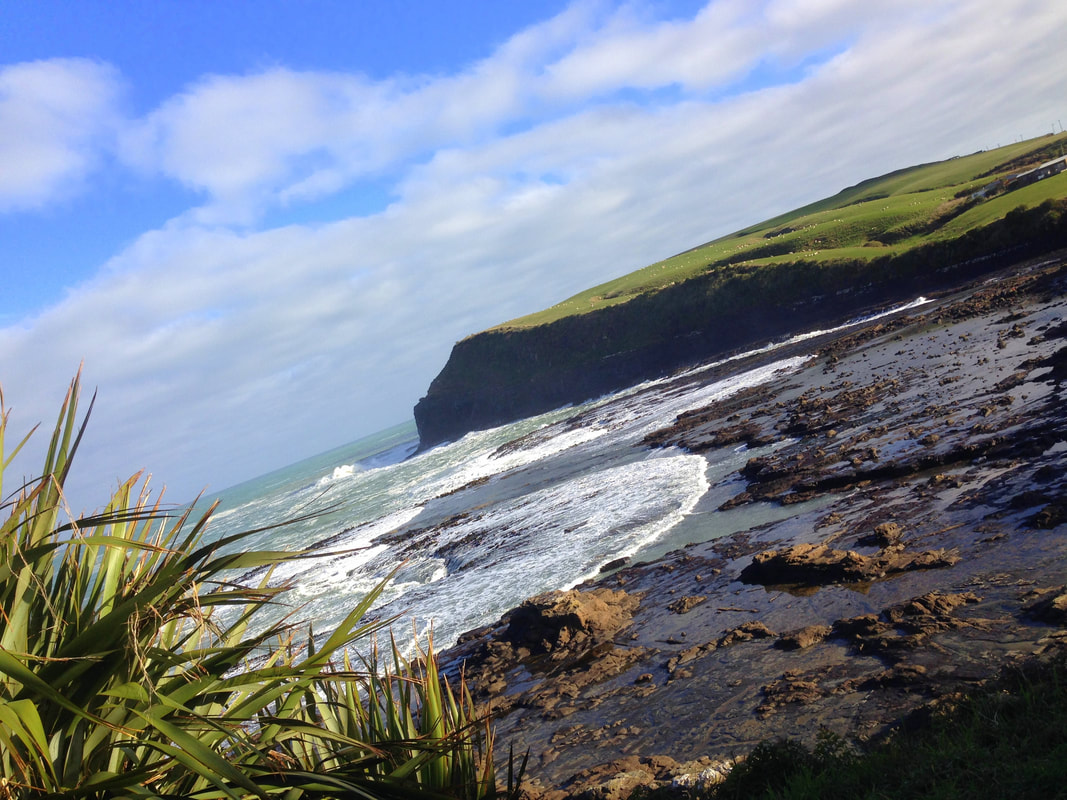 ​And even when waiting good things happen if you just have the right mindset. My first ride was offered by a couple eager to visit the locally well-known Lost Gypsy Gallery. It was closed for the winter, so that’s where I got temporarily stuck while waiting for the next lost stranger to take me along on his wanderings... until the Lost Gypsy himself randomly popped up, inviting me in for a warm cuppa and a private tour through his remarkable exhibition of oddities and outbursts of physics met by a creative mind. A thrilling insight in the wandering brain of a genius, offering a journey through his concretized imaginations.
Creativity growing out of the fertile soil of immaculate nature, feeding free spirits and undisturbed thoughts. From materialised dreams of the Lost Gypsy right back in reality to my own utopian memories again... when I’ll need internal peace I’ll simply close my eyes and travel back to The Catlins.