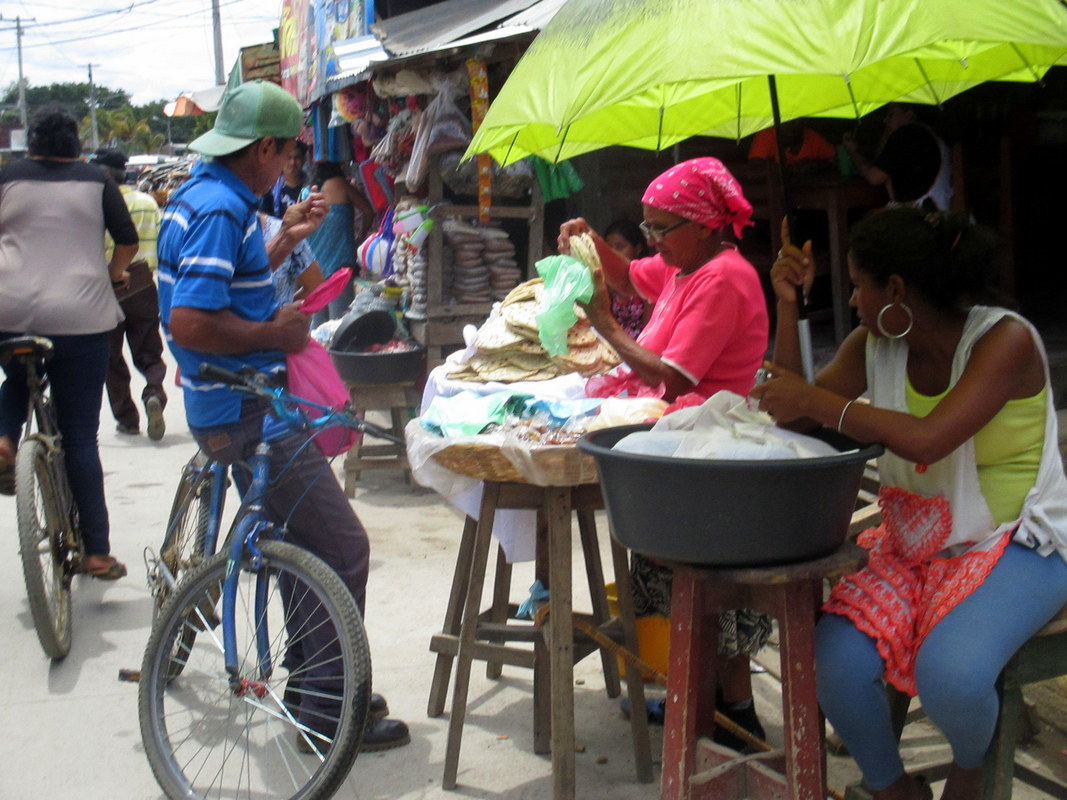 After spending over a month in outrageously expensive Costa Rica, I was thrilled to cross the border to visit its supposedly dirt-cheap neighbour Nicaragua. Cheap is usually related to a challenged economy though, which translates in being charged the ‘gringo-tax' on basically everything. So after I paid $7 to get out of country #1, $12 to get into country #2 and another $1 to get into the municipality, I realized cheap is only meant for the locals... okay, it’s not coming close to European prices, but it’s certainly not as economical as Bolivia, Peru, Ecuador or South-East Asia (in Peru you can purchase a simple market meal for $1, here you pay $4... and even though you can find a comfortable private room for $5 in Thailand or Bolivia, here $12 is considered a bargain).

However, in order to stay into your budget you can live like the locals, and instead of taking a fancy shuttle or taxi grab the rattling chickenbus: an old and trashed yellow American schoolbus. Central American countries don’t built buses... they buy up depreciated North American buses that are considered too dangerous to drive and don’t pass the local safety regulations,  to sequentially give them a new life in Central America’s uncontrollable traffic chaos in which safety is an abstract concept they only hear paranoid westerners chattering about. After the nevertheless scenic ride in which I caught a glimpse of the Ometepe volcanoes and spotted an environmentally friendly windmill-park that apparently only produces clean energy for other countries, the bus drove into Rivas’ turbulent market place. 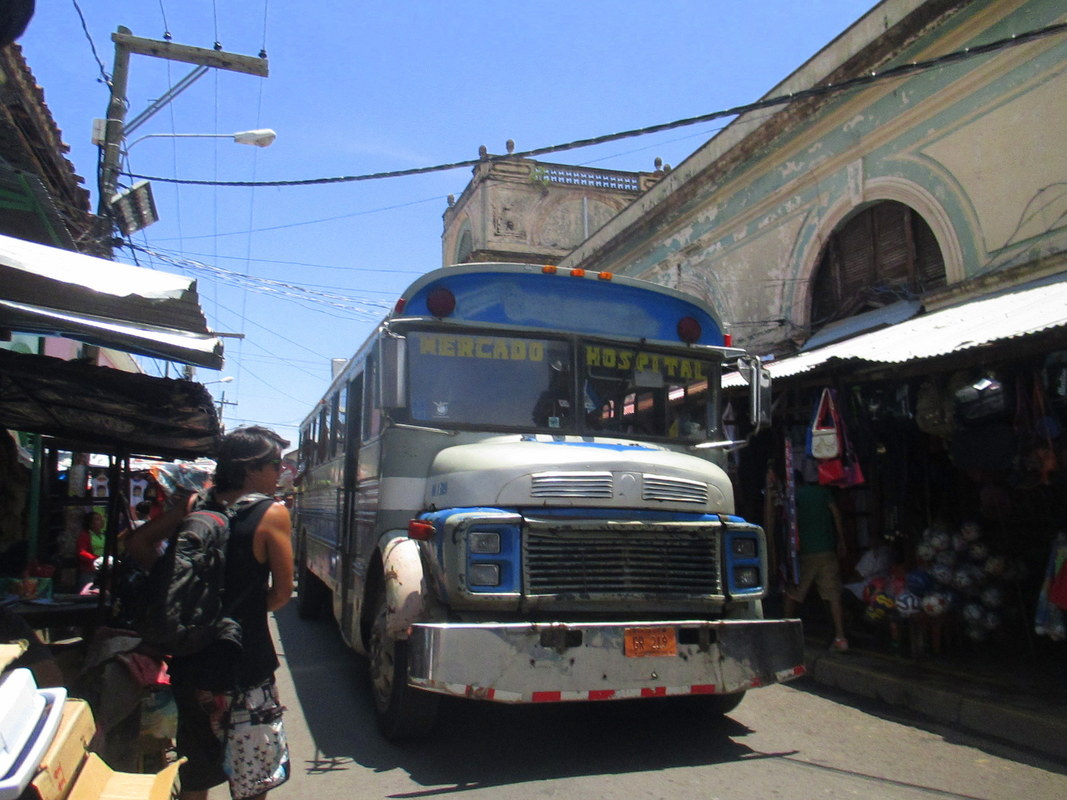 ​While I was struggling to load my two heavy backpacks on me in the narrow alley of the bus, the driver grabbed me by the shoulder and screamed to me with big staring eyes to leave the bus NOW. Before my brain could even grasp the content of this message at least 50 people started to aggressively push me back into the bus, forming an inaccessible wall of flesh ready to steamroll me if I wouldn’t cooperate. Desperately shouting in Spanish I tried to point out the logic of letting people out first to make more room for the people going in, but I realized I was talking to deaf men’s ears. Putting my metal-experience into practice I half crowdsurfed / half moshpitted myself out, after which I leaned towards a streetlight panting and trying to cope with the 35-degrees dry heat and countless vendors zooming towards me like bears to a pot of honey, fighting for my attention. I closed my eyes and realized I was back in my memories of Asia... back to the relative poverty (in the wallet - not in the mind), begging children, bright colours, smells of herbs, fruits, things rotting and urine, screams of rattling and spitting street vendors and the 1001 impulses and exciting street life scenes taking place in front of your eyes.
Back to a place that is incomparable to anything I grew up in, disassociating me from everything I consider familiar.  I opened my eyes again and immediately knew I would love this country. 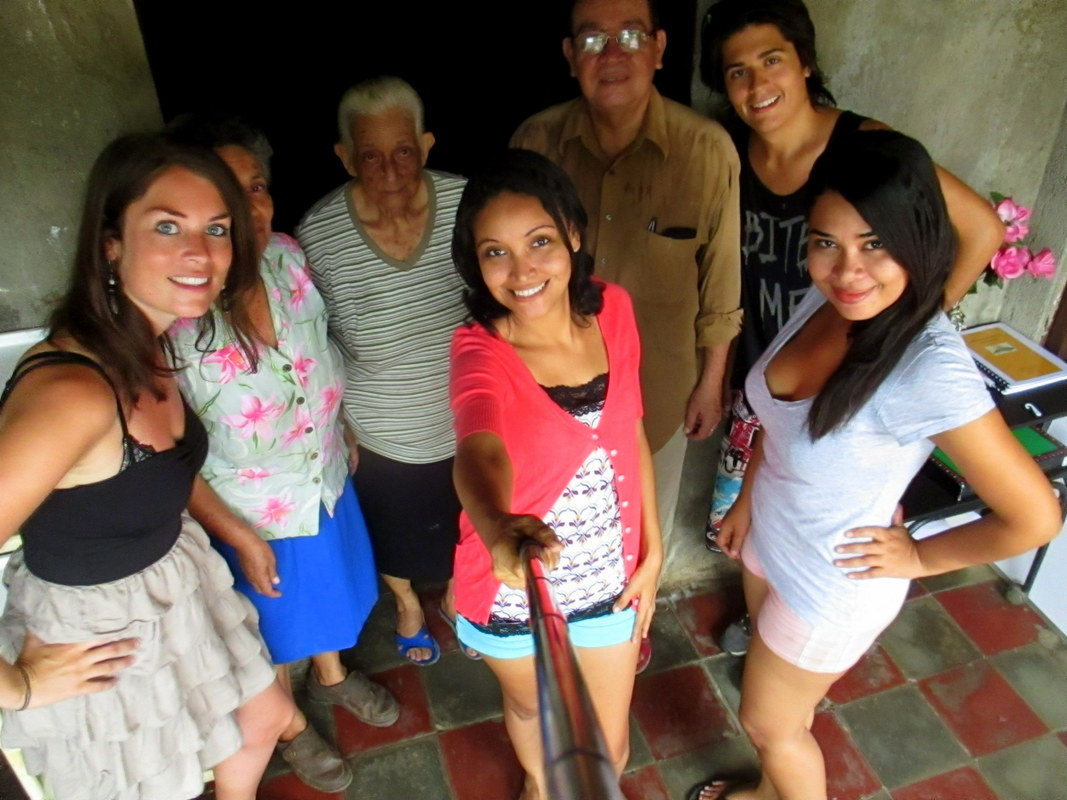 ​In the tranquillity inside of the local bakery I tried to get in touch with Couchsurfer Isabel who would be welcoming me in her home the next few days. Little did we know not only she, but her entire family would be hosting us: mom, dad, three adult kids, grandma and dog Luna. You basically live in with your parents until you get married and even then odds are high the newly-weds move back into a room at momsy’s... or in a bed in the living room behind a closet, in a bunk bed next to your sister or anywhere where there’s some space left. Initially we were supposed to sleep in the corridor next to the sidewalk, but later we learned the mother decided to sleep with granny in order to make her bed in the kitchen available for us. Another example of ‘the less you have, the bigger the hospitality’. I’m always amazed how far people go to make complete strangers feel welcome.
​While sitting on the plastic chairs under the iron roof we got ourselves familiar with yet another Spanish accent, as the lovely Isabel chatted away about her language school and her unlimited devotion to her country which she thinks is the best in the world... which reminded me of a quote of Pessoa: "Life is what we conceive it to be - for a farmer who considers his field to be everything, the field is an empire. For a Caesar whose empire is still not enough, the empire is a field. The poor man possesses an empire, the great man a field. All that we truly possess are our own sensations; it's in them, rather than in what they sense, that we must base our life's reality."

It was a warm welcome indeed. That night we brought sweating to a whole new level. My legs, my ears, my chin; sweat dripped from every part of my body. The 100% Nica heat is a thing too. After eight hours staring at the ceiling I finally decided to get up and join the family’s gallo pinto breakfast: Rice, beans, tortillas and hot sauce. Yes, I said breakfast. I flushed it all away with the tooth-rottening sweet sugar-cane-coffee the mom prepared for me. 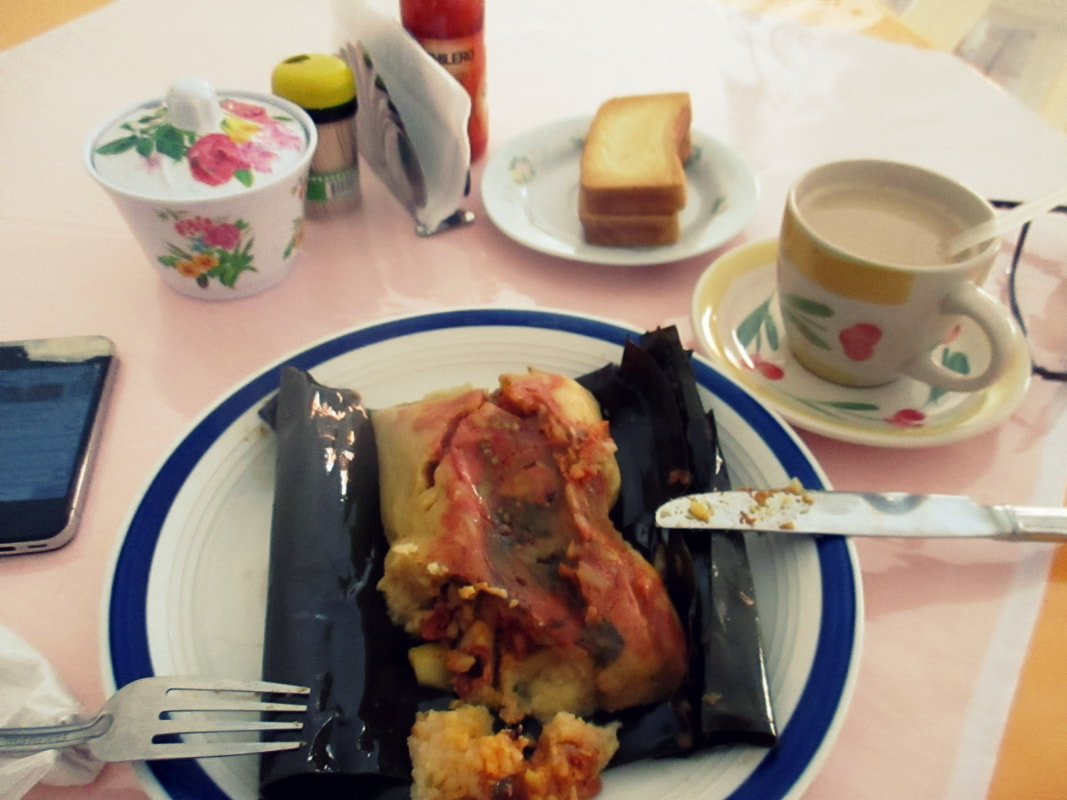 And this is a 'tamal', an alternative breakfast.


After this we got ready for the little cemetery tour Isabel’s sister and her friend Jonathan wanted to give me. Isabel didn’t join as she fell on her knee and was convinced that the underground death people would infect her wound. Just like in Italy, cemeteries are happy, colourful places here. The main reason we went here I figured out as soon as we climbed to the graves on the hill and turned around to witness the most breathtaking view over the town and Ometepe Island. I absorbed the stillness before heading back to the market, trying to observantly submerge in the street scenes without letting the chaos infiltrate my brain.
After another sleepless night I took the rattle-bus to touristy San Juan Del Sur (or as locals call it: ‘Gringolandia’), a place strongly recommended by the young & wild backpacker-masses all travelling to the exact same Lonely Planet destinations. As soon as we got off the bus whispering drugdealers informed us about their wares and big English signs advertised all the 1001 tours you can book. At that point I just wanted to turn around and go back to bed, but decided now I came all the way I might as well check out this so-called ‘hotspot’. That was a mistake.
​
The beach, which is nothing more than a polluted bay, had its black sand covered with dogshit, the sides filled up with gringo-bars without one single Nicaraguan hanging out there (they were in the carpark, taking drugs). I decided to walk to some Jesus-statue up the hill, to discover they dare to charge an entrance fee for that. Are you kidding me? Basically every South- and Central-American city has some Jesus or religious cross to ‘watch over town’ and I never had to pay one single penny... and now, the supposedly cheapest country of all is charging? I turned around humming a song of Skunk Anansie... “They’re selling Jesus again, they want your soul and your money, your blood and your votes...” 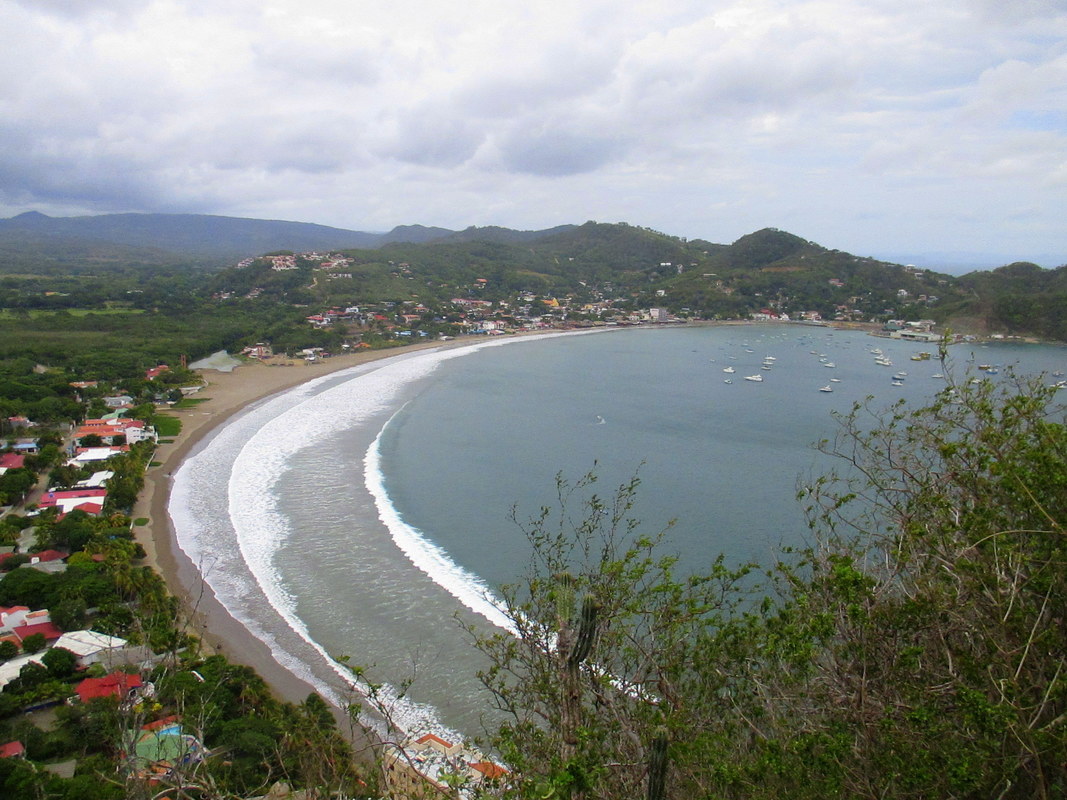 Yeah, San Juan Del Sur. A place for travellers that don’t want to travel, but just want to do what they can do everywhere else in the world: hang around, party, speak English, avoid the ‘scary locals’ and drink until you can’t remember where you are anymore. And honestly, forgetting where you are might be the best option indeed here.

Gladly I returned to Rivas, a place usually avoided by backpackers who consider it too crude and therefore dangerous. Crude indeed, and unpolished and a bit more rough, but therefore real. This is Nicaragua as it is, and not the Nicaragua that travel guides or slick brochures try to present to the masses. 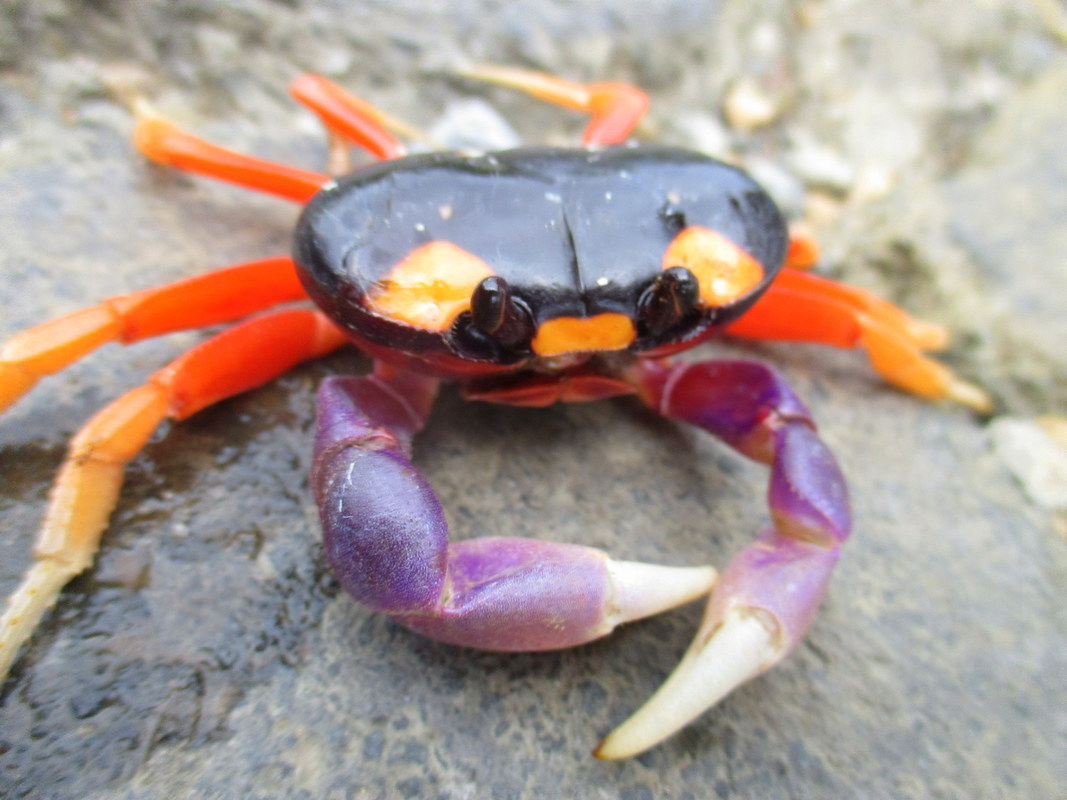 In order to support the travelers’ community, I spend many hours per week to adequately document all information and advices for prospective visitors, accompanied by a (hopefully) entertaining insight into my personal observations and experiences. This service is and will remain free. However, if you voluntarily want to make a contribution and support my travels and thus the creation of new stories and information supply, here is the button you’re looking for:
Donate
Related:
- Colonial towns in Nicaragua: León & Granada
- More Volcano-hopping in Nicaragua: Isla de Omtepe, Mombacho, Masaya & Hervidores de San Jacinto
- Nicaraguan hiking adventures: Matagalpa, San Sebastián de Yali, Mombacho & Laguna Apoyo
- An amazing canyoning adventure in Somoto, Nicaragua
​​- The most authentic beach place in Nicaragua: Playa Gigante
- Another place to avoid in Nicaragua: Managua
- Other party-hardy backpacker disillusions to avoid: Taganga [Colombia], Cancún [Mexico], Playa del Carmen [Mexico], San Pedro [Lago de Atitlan, Guatemala]
- Corruption at the Nicaraguan-Honduran border
​- The least exciting place in Colombia: Manizales
​- Not worth the effort: Huacachina, Peru
- Where you shouldn't go to for holidays: Kaunas, Lithuania
​- The face of mass tourism: Kota Kinabalu, Malaysia, Borneo