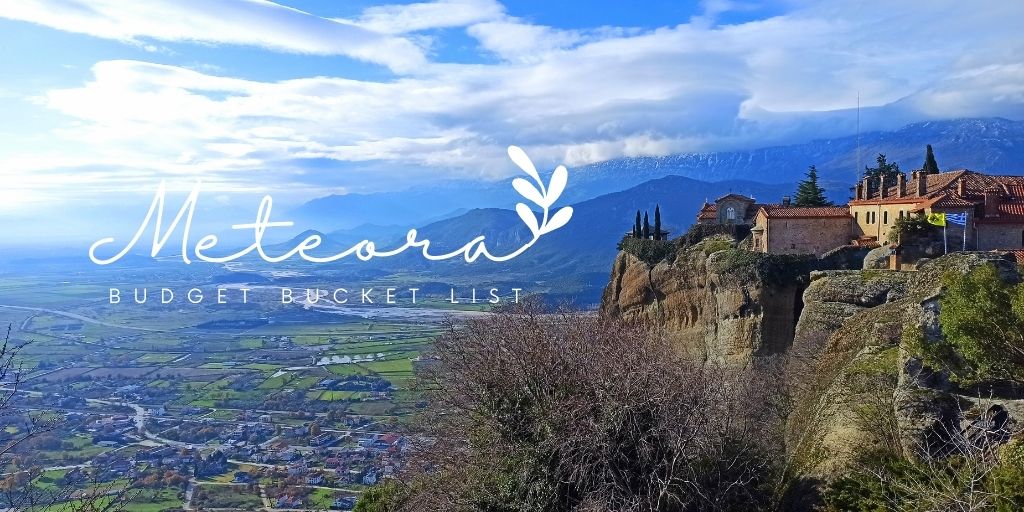 Not in the story-mood? Scroll down for the Quick Budget Fact Overview: an itemized information summary of Meteora! ↓
I have a “dare” for you…

I dare you to find someone, anyone who has visited Meteora in his/her lifetime without being astoundingly impressed. Even if we shortly ignore its peculiar history, the uncanny landscape will inescapably put a spell on you. At the foothills of the Pindus Mountain Range a spectacle of geological marvels suddenly rises up in the air, as a result of a dramatic tectonic uplift of what was once a sea. The suddenly exposed rocks were subsequently exposed to a powerplay of rain, water and ice, carving out an almost extra-terrestrial scenery by the means of erosion. The flow of rainwater continuously disintegrates the rock-masses while simultaneously dissolving the carbonate groundmass. When the water in the cracks freezes and expands, the rocks separate and flake, creating caves and the particular holes and reliefs the Meteora is so famous for. The fierce winds complete the process by aiding to erode and disintegrate, as well as blowing off the weathered material. What is left is a collection of over fifty vertical 100-300m sandstone pillars, spread over an area of 3,5 square kilometres… Meteora, its name meaning “suspended in the air”.

Now let’s add a unique element of Greek culture to the mix and we’ve got ourselves a UNESCO World Heritage Site. The first hermit monks appeared in the area as early as the 11th century, whereas the monastery complex truly started to flourish during the Ottoman conquest of the Byzantine Empire (14th century). As the Ottomans had a habit of persecuting the non-Muslims, especially the ones personifying that faith, the Orthodox monks attempted to seek refuge in increasingly remote locations. It doesn’t get more isolated than right on the pointy peak of a sandstone pillar, with the only means of entrance being dragged up via a large net… 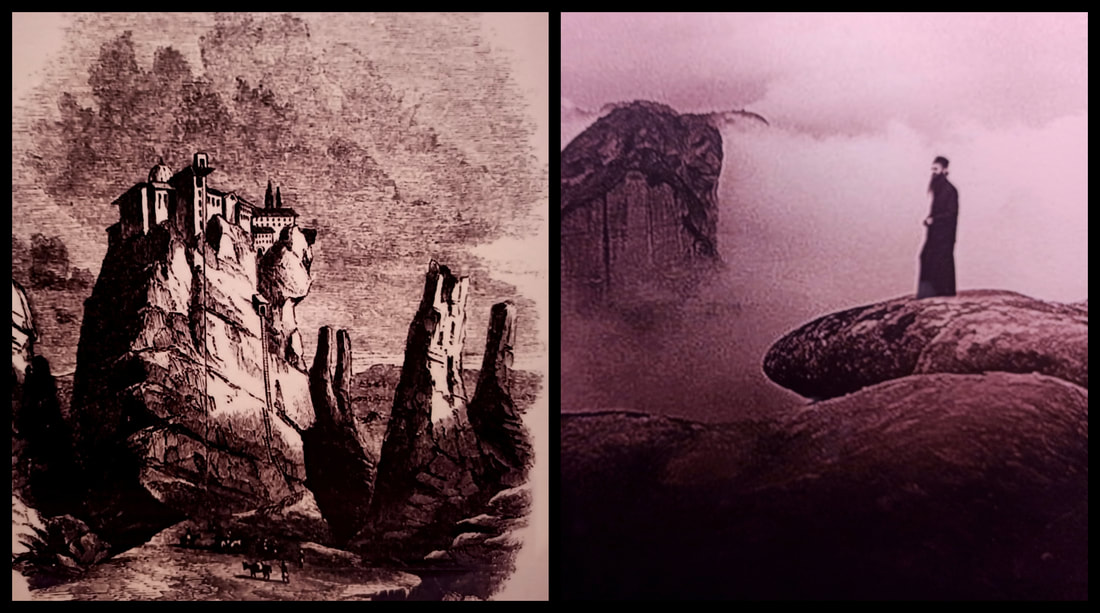 Too busy to read now? No problem, save it for later!
​Save on Get Pocket | Save in Browser Bookmarks| Save on Instapaper
Monasteries & Hikes

Nowadays, steps have been carved into the rocks, so we can leave those nets at home. Unfortunately, of the original 24 monasteries, only 6 active ones survived: 5 exclusively for men, and 1 for women only (that said, female visitors are welcome in all of them).

​
The monasteries open for visitors:

All mentioned monasteries charge an entry fee. Anno 2022 this was €3, but this is likely to increase over time. A comfortable asphalt road connects the monasteries, which allows for a rapid visit by car. Alternatively, a bus going up leaves Kalambaka a couple of times a day (in 2022 costing €1,60 for a 1-way ride). However, in order to truly experience this extraordinary place and fully submerge into it, I whole-heartedly recommend exploring Meteora on foot. There are several hiking trails swirling through the rocks, leading you to spots inaccessible for vehicles. Don’t be mistaken, even though the site is relatively small, the sudden peaks in an otherwise flat landscape involve a constant up-and-down, requiring a decent level of fitness. Besides the enhanced experience, hiking is also the only way to explore the slightly differently-shaped Meteora hinterland, as well as the many caves… of which there are no less than 40!

My hiking route, spread out over two exploration days. You do not need a guide: 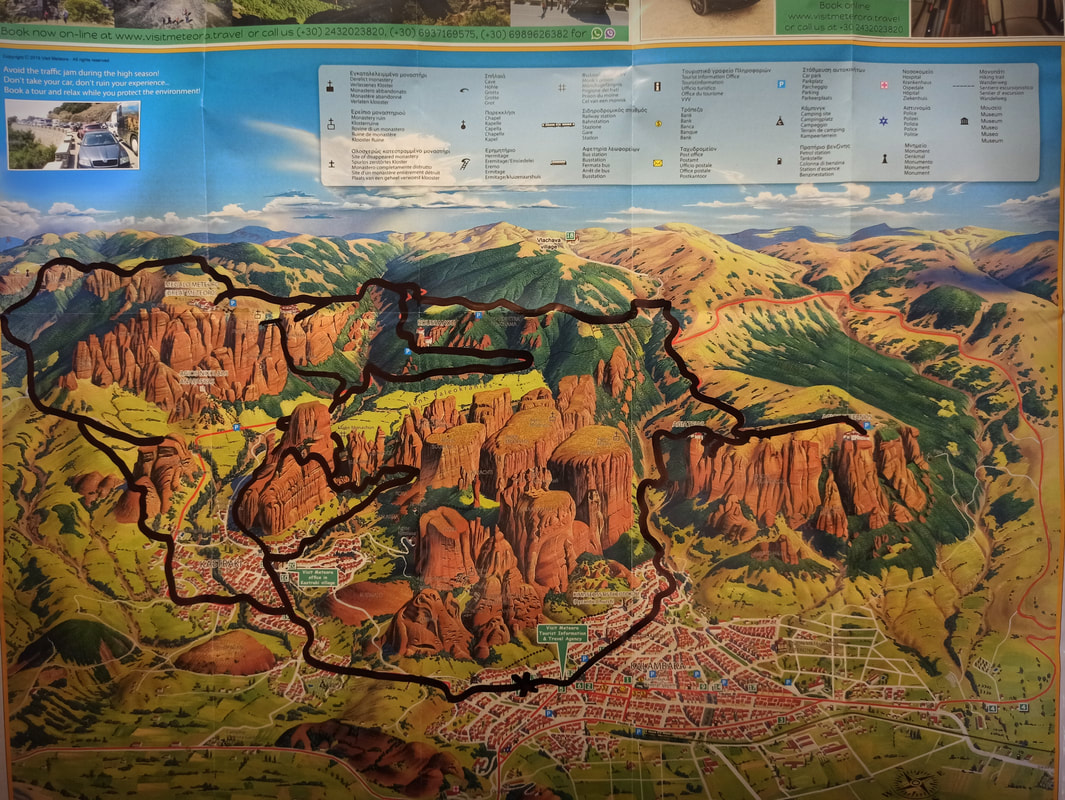 As an extra activity, I recommend visiting the Museum of Geological Formations in Kastraki to learn more about the natural processes shaping the rocks of Meteora. Entry is free of charge.

There are two bases for exploring Meteora: the southern Kalambaka* and northern Kastraki. I stayed in the first one, which is the biggest and most well-serviced of the two… but in hindsight I would have probably preferred the more peaceful Kastraki, the odd spindle rock shaping its background.

As this is one of the most popular tourist attractions of the Greek mainland, the infrastructure is well-developed. Kalambaka is served by both train- and bus routes, plus highway E92 / 6 goes right along the town. There are many shops and restaurants, according to my hostel owner serving mediocre food the “Greeks would never eat.” For self-catering, you have the budget supermarket Lidl just outside of town.

Keep in mind that to enter the monasteries, proper attire is required: Women must cover the legs with skirts at least below the knees, and men must wear long pants. Alternatively, you can cover up with a scarf (to avoid unexpected costs, bring your own). It’s not allowed to wear hats inside.

I purposely didn’t share bus schedules and opening times of the monasteries, as they tend to vary continuously. The schedules I received at my accommodation and at the tourist office were already not matching the actual opening times anymore, which unfortunately meant I missed out on the Great Meteoron (during my most recent visit).

​
* Sometimes written as Kalabaka or Kalampaka.
It wasn’t my first time in Meteora. I visited the site 25 years earlier on a family holiday in the early 90’s. This recreation of an old picture of my dad we made back then shows, besides nostalgia, also the effects of erosion (and most probably human-enhanced damage) in such a short timeframe: 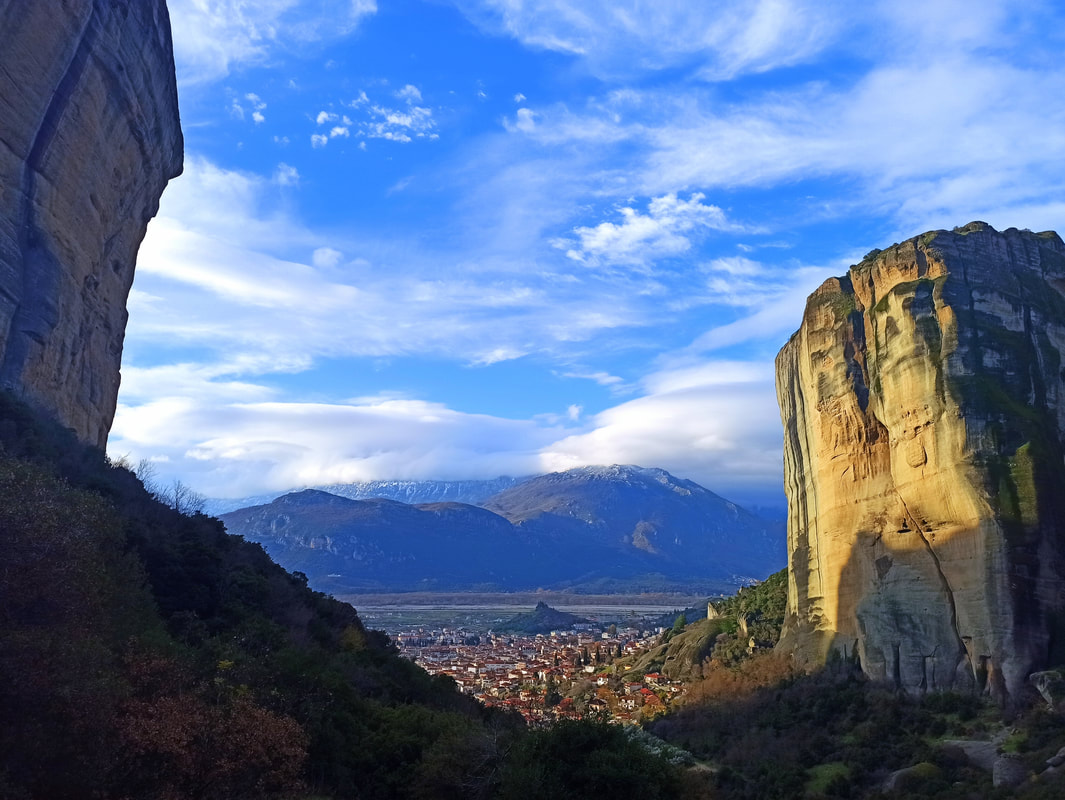 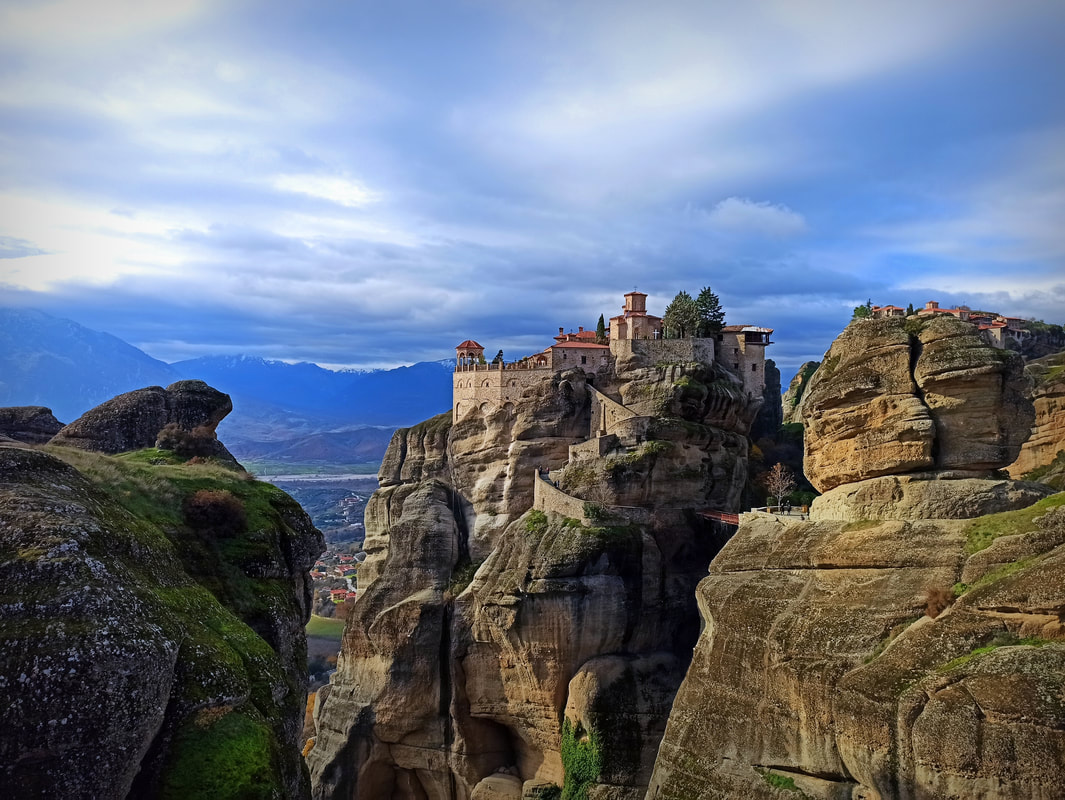 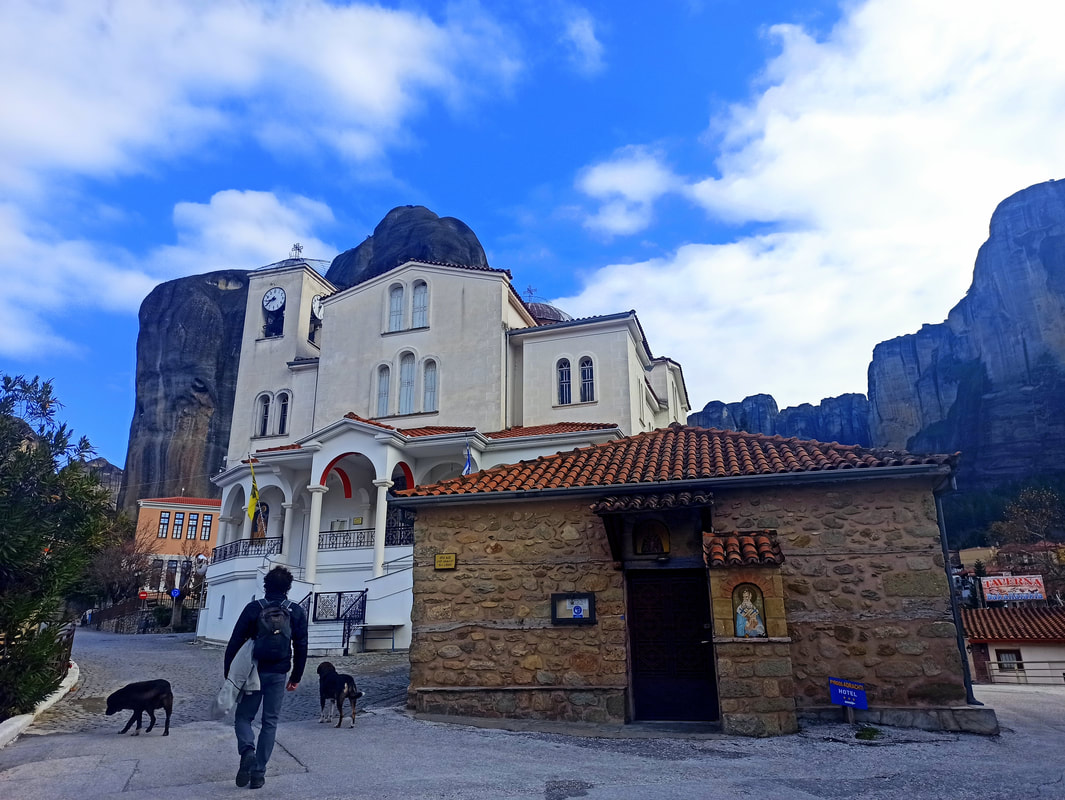