Download File
The legend precedes the actual experience. I don’t think I met one traveler, local or random passer-by who did not recommend Queenstown as THE place to go to in New Zealand.

It made me skeptical.
​
If everyone mentions it, that means also that everyone went or will go there and a place being too touristy can never work in its favour. 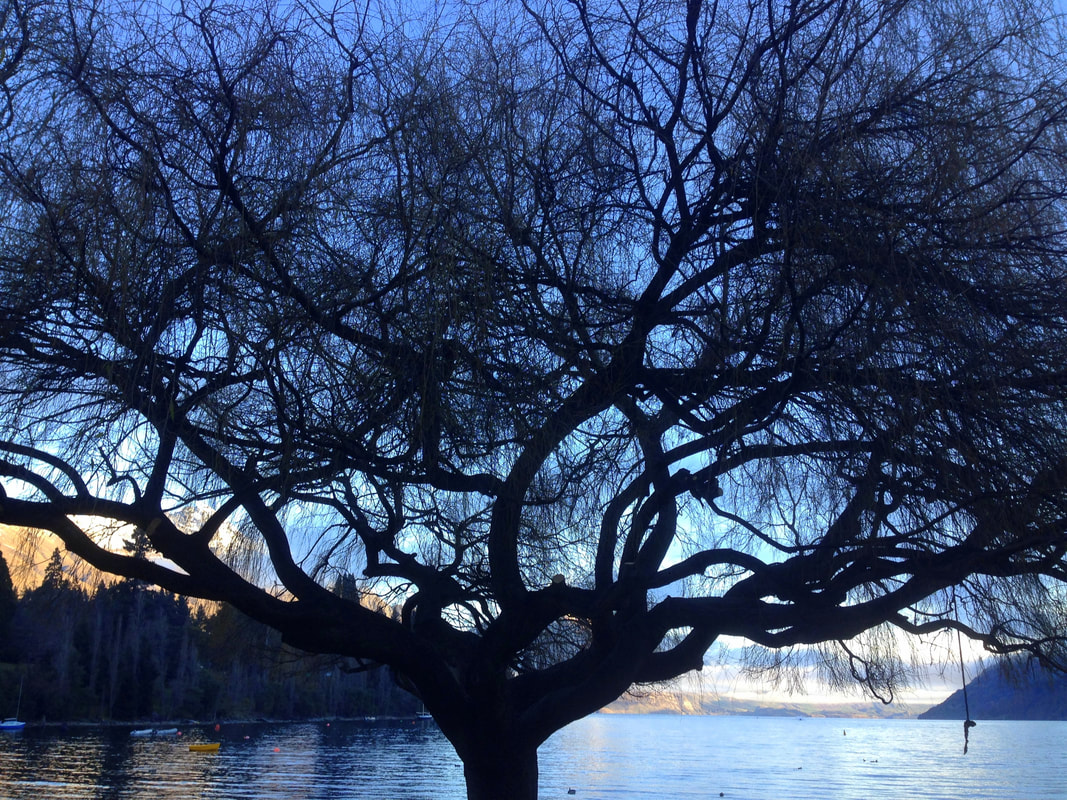 That assumption was indeed correct. No matter the season, this skiing and hiking town is permanently flooded with every single nationality, but pre-dominantly Asians. Whereas there are only about 15,300 inhabitants in the urban area (a steady growth of +5-12% a year), the township bursts out of its seams with about a million tourists visiting per year. Queenstown has no low season. It reminded me strongly of that other way too touristy but way too pretty place I visited not too long ago: Bariloche, Argentina. And not only because also the Argentineans found their way to this obvious hotspot, with thousands at a time... 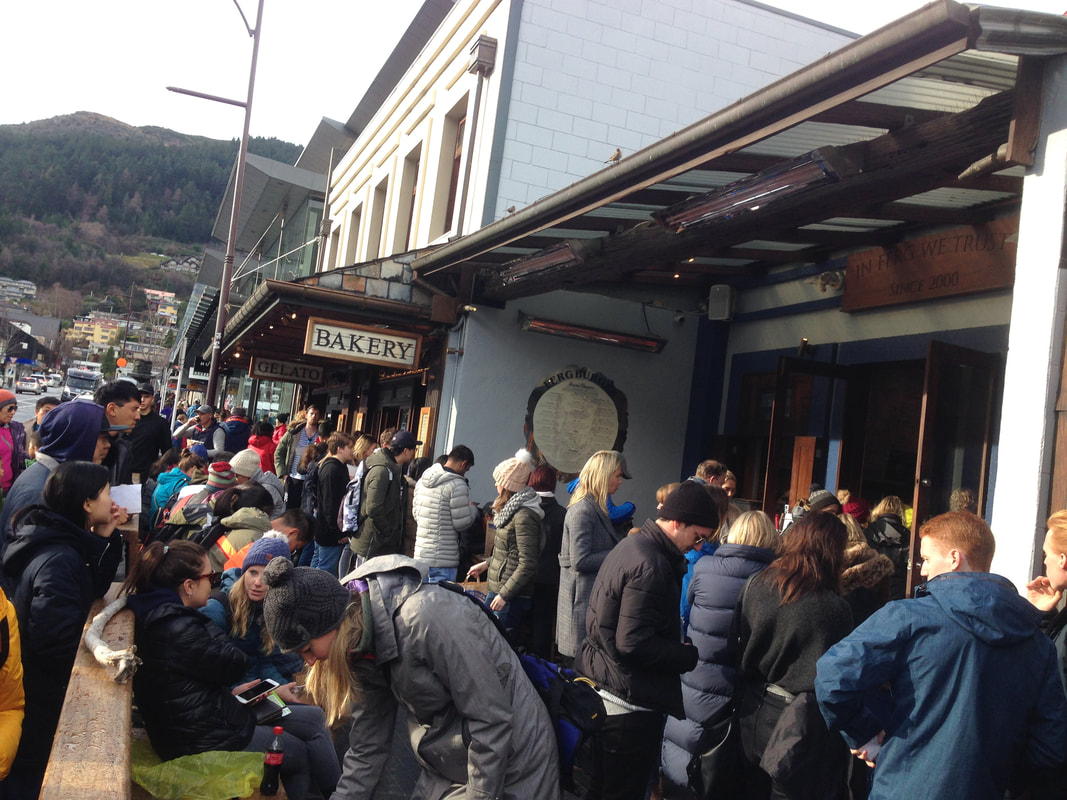 It seems hard to keep an eye on the budget in places like this, but it really isn’t. Everything is a choice.*

It’s for example all up to you if you want to pay hundreds of dollars for a hotel or even about $40 for a rickety-rackety hostel bed with ten other snorers in one space... or if you decide to not spend a dime and crash on a floor-mattress of a Couchsurfer. Nick was his name, a well-known DJ entertaining the rowdy crowds in Queenstown’s pumping nightlife.

Similarly, you can decide to lose your limited travel dollars on unauthentic experiences you can basically do everywhere else in the world too, and cheaper (I name skydiving, paragliding, speedboat-rides, ziplining, bungeejumping, the Ice Bar... commercializing is the new black in Q’town), or you can do something that’s unique to the place and entirely free. Hiking, I’m talking hiking.
​
* Transport budget-tip: Buy a $5 Go Card from the bus driver to receive about 70% off all bus rides. Plus, a trip to the airport will cost you $2 instead of $15 cash. 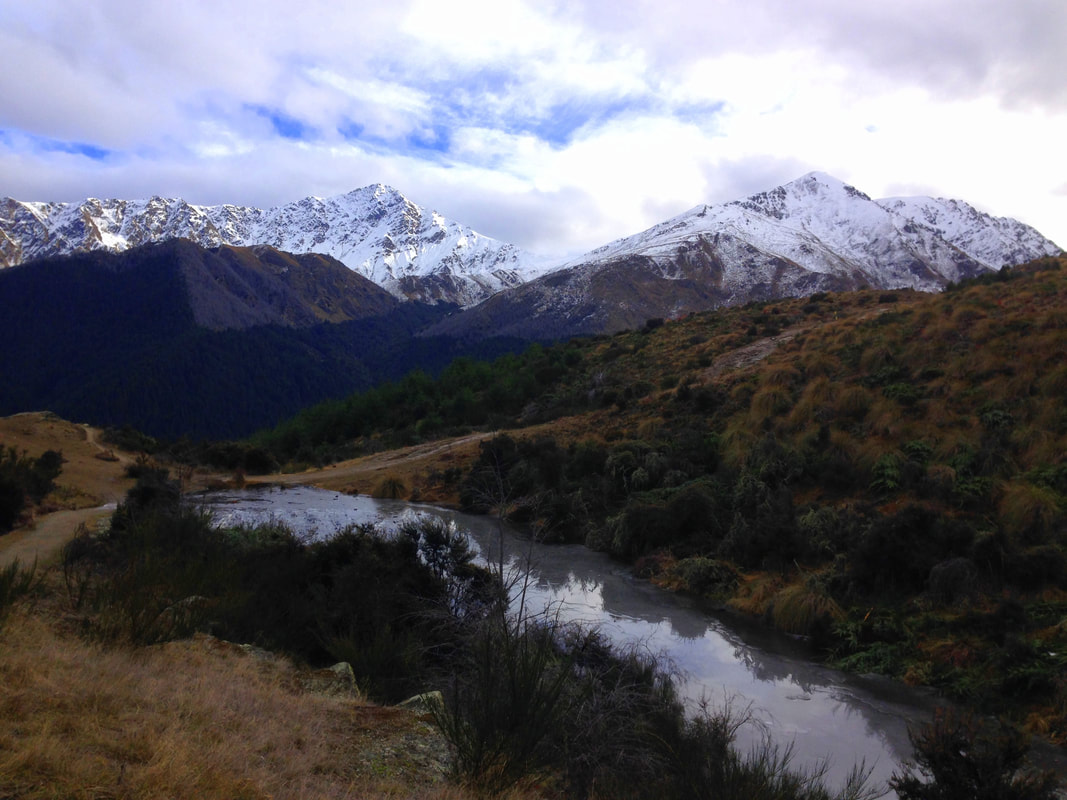 Now I must inform you that I, a fervent hiker, arrived out of hiking season. I could’ve gone skiing, which is a fun but also very expensive option, but no, I like to make stuff unnecessary difficult for myself. You see, not only are the tracks and huts unserviced, many of the bridges removed (avalanches destroy them) and trails snowy and icy, also the weather absolutely didn’t work in my favour. Pouring rain below the bushline, snowstorms above.
​
Time to show some character.
As such, my options were limited. I wasn’t exaggerating when I just said the weather wasn’t all that great: Downpours of rain and hail, as well as black ice had caused landslides and floodings in the direction of Glenorchy, making all northern hikes inaccessible... which crosses the tracks around Mt. Chrichton, Moke Lake and Lake Dispute off the list. Extreme snowfall had covered The Remarkables ski area in about two meters of snow, making the Lake Alta Track entirely disappear. And honestly, I couldn’t be bothered to hitchhike all the way down south (for the fourth time) to finish the Kelvin Peninsula Track, Lowe Wye Creek Track and Jack’s Point Track, unreachable by public transport. [That said, try to at least make a short stop at the scenic Kingston – husband of, and maybe give the Devil’s Staircase track a go... supreme lake views!]

That leaves us with the following:

Leaving straight from the city centre this makes for an interesting introductory walk. It won’t take much of your time (2-3 hours), you don’t need to be super fit (although it does get steep at times) and you can even bring your dog along. It’s therefore rather unexpected what magnificent views you’ll find up top, mildly reminding of a twist of Patagonia. One of the most rewarding hikes with minimal input.
Frankton Track
​
Named as track, it more serves as a way to get from the suburb Frankton to downtown Queenstown, giving way to both walkers and bikers. A flat stroll with continuous views of the photogenic Wakatipu Lake makes it an attractive alternative to the busy highway, but don’t be mistaken by the length: It will take you an hour at least! 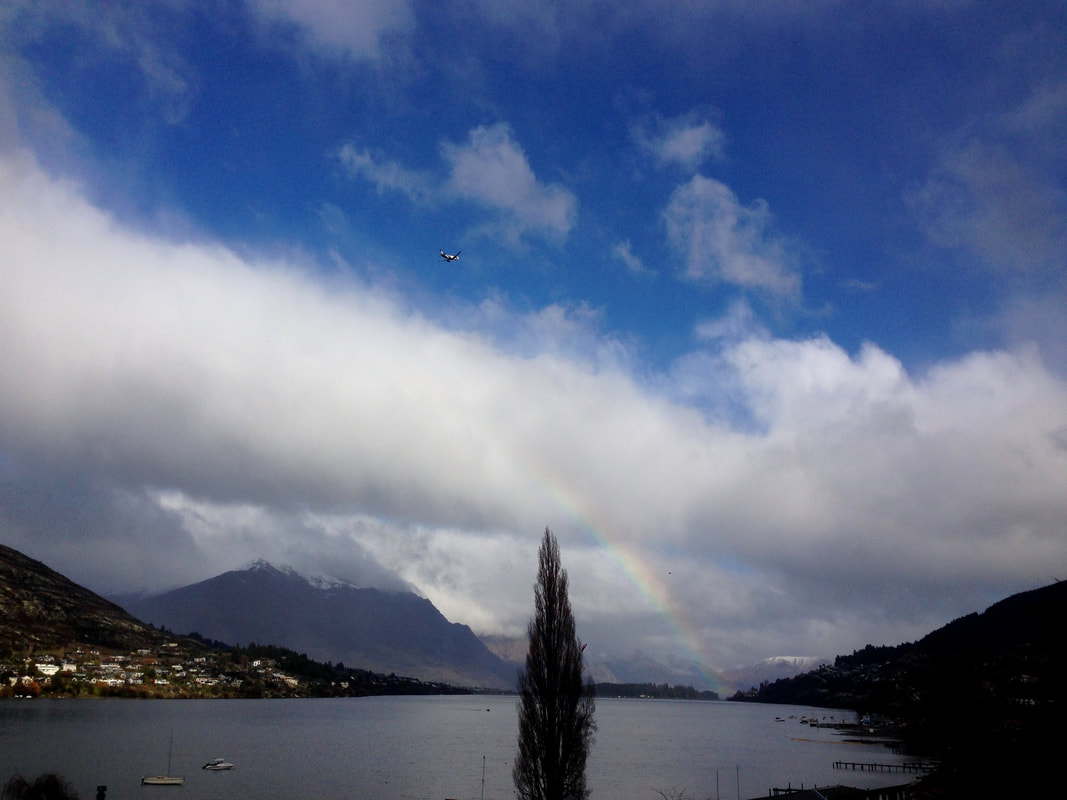 Sunshine Bay Walk
​
On the other side of the lake you can follow the Sunshine Bay Walk all the way passed the suburb of Fernhill. It conveniently leaves just out of town and is easy enough to complete in less than an hour. Irony had it that when I completed this rather flat but scenic hike a cloudburst aggressively poured down all over me. What’s in a name?!

​
Arawata Bridle Track
​
You can access the Arawata Track just south of the Sunshine Bay Walk’s end or from Fernhill, either walking the 45 minutes towards the car park or continuing 5km down the Glenorchy Road. It’s a bush walk, every now and then granting some scarce views over Queenstown and the Wakatipu Lake. As the photos suggest, best done in sunny weather.
Ben Lomond
​
The hike of all hikes in Queenstown. The most mentioned, Instagrammed and retweeted walk of all, making every amateur feel like a mountaineer. Yes, it is high and yes, it can get quite steep, but instead of the 7-8 hours indicated you can shave off at least half of that if you’re not a heart patient or chain smoker... especially if you get up first via the overpriced gondola. I didn’t though, I took the Tiki Trail up, which isn’t all that ‘family friendly’ as the name suggests: It’s the muscle-burning, knee-breaking way up for the poor! Don’t expect any views there, this trail is utterly destroyed by that concept called mass tourism, ruining local forests with inventions such as ziplining. The views start well passed the gondola’s end point... where the official Ben Lomond Track begins.
Now, you might have seen the popular shots of travelers looking out over a cloud-filled valley lit up by the orange-pink morning sun, arms wide-spread embracing the vista for the ultimate drama-shoot. Well, that’s summer for you. Reality-check: I got caught in a snow storm. And I’m not talking a few flakes... nope, I was wading waist-deep into it the very end. Am I complaining? Of course not!

Winter is when this landscape comes alive! 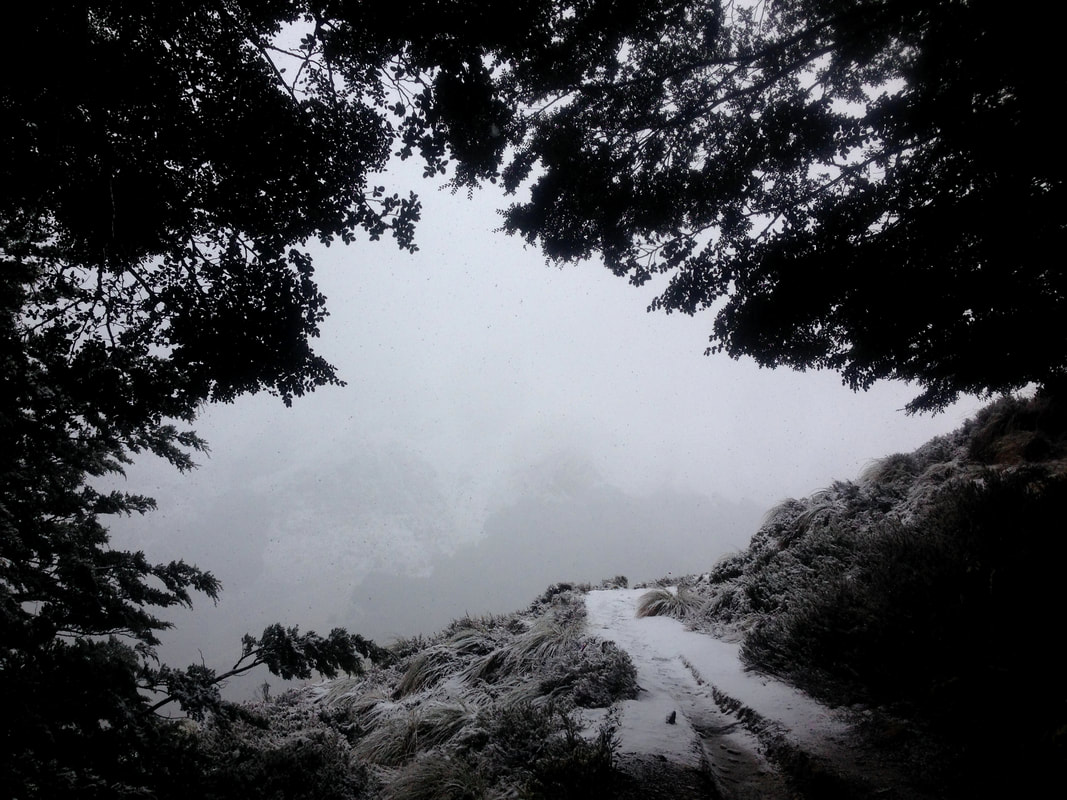 This is the deep south, tucked away into the mountain range: It’s supposed to be rough and ferociously volatile, not full of green and flowers! You want to see Chuck Norris fighting until his knuckles bleed right, not see him shed some tears in a housewife-hospital-drama!? Somehow this is my point.
​

One place carved firmly on your bucket list should be the neighbouring Arrowtown, even if it’s just for a day trip. Arrowtown is everything Queenstown is not: Authentic, quiet after 5PM and with a kiwi-favoured locals-tourist-ratio. True, it is flooded with Asians, but in their defense, this is where a crucial part of their immigration history took place. During the Otago Gold Rush in the 1860s this is where the Chinese were based, after being recruited by provincial authorities. Nowadays the Chinese settlement is still there for us to walk through, shining a light on the hardships these tough men needed to endure... not in the least related to the fierce racism they received from the kiwis (who are, as a matter of fact, immigrants and their descendants themselves – but if you’re a racist you might as well embrace hypocrisy as well). 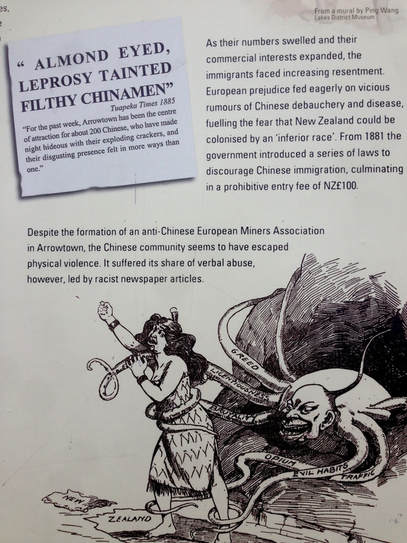 “There is about as much distinction between a European and a Chinaman as that between a Chinaman and a monkey”, former Premier Richard Seddon once said. It took until 2002 for the New Zealand government to formally apologize to the Chinese community.

I was, however, spending two nights in the room of Sam. A blonde wild-looking giant who’s remarkably handy with a keyboard and... well, basically every other instrument that comes on his way, including his voice. This promising musician even let me feature in one of his new creations, immortalizing my Dutch whispering in a dreamy song. Kiwi Cobain, there you go:
Check out Sam Wave
​
​As everywhere, I managed to find a couple of hikes that were certainly worthwhile, although hard to find due to the very confusing signage. I followed the Millennium Trail out of the Chinese Settlement to end up at the scenic Bush Trail. I tried to follow it as far as I could, but the entire track was one long ice plate making any sense of balance entirely absent. Even my fierce little walking sticks couldn’t save me from a few sensational slidings here. 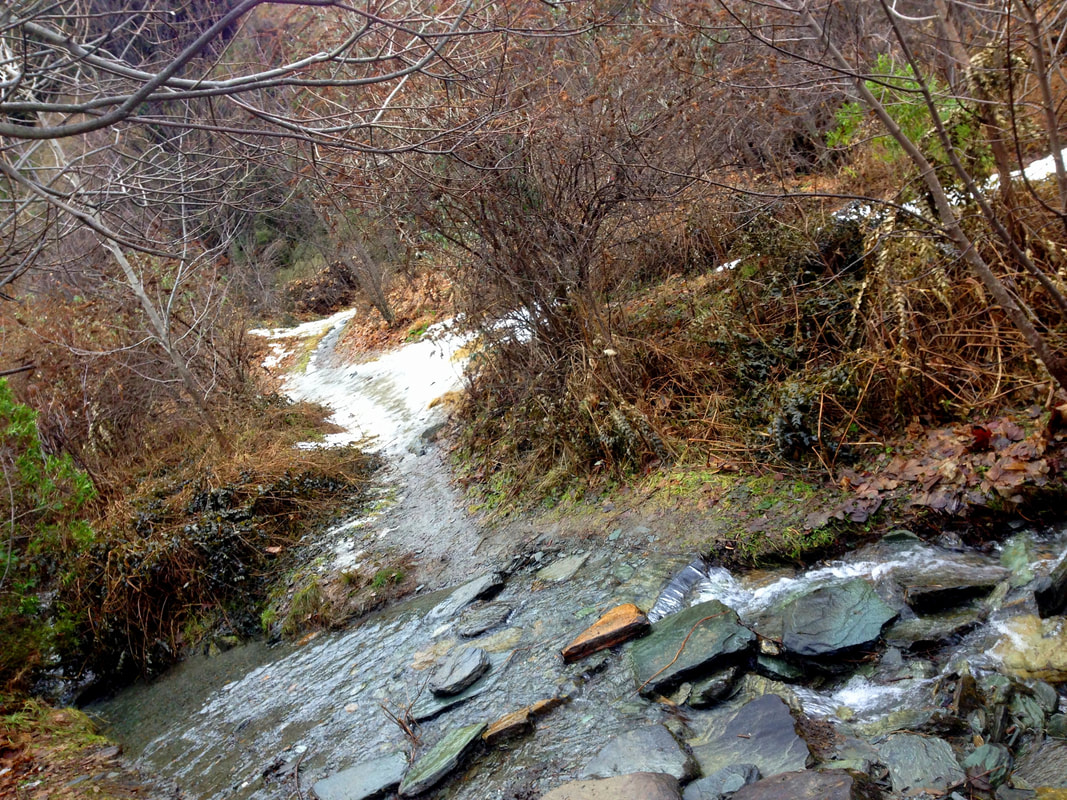 ​Therefore I returned to the trail-split and continued on the Saw Pit Gully Loop, that was as icy as the previous one. As such, it might have taken me exactly as long as the signs suggested, for the first time in seven months New Zealand... that said, the mid-mountain views were worth the trouble. A cloudburst demanded my return shortly after completion.
Other Arrowtown trails: Big Hill Trail (summer-spring), Tobin’s Track, Lake Hayes Track & Mount Dewar Ascend.
​
​
Arrowtown, what Queenstown once was before the touristic destruction set course. I wondered what this undeniable majestic environment would feel like without any crowds at all... so I traveled to Kinloch.