Download File
I scrolled through my phone and stared at the picture that I once took of some random Geographic-Traveler-Magazine-article five years ago.

It wasn’t a question if I’d go there, but when.

And I refused delete the picture until I did, I can be persistent like that. 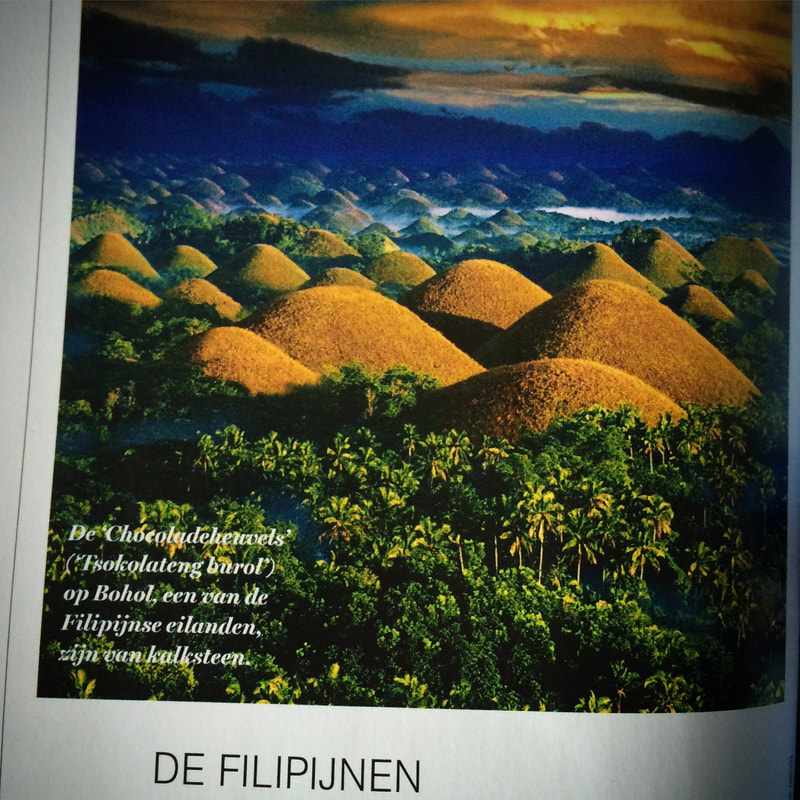 I couldn’t see anything through the clouds, but I felt them. From the plane I could feel the Chocolate Hills under me, the endless landscape of brown mellow peaks stretching out until eternity. I was going to be a part of that scenery soon, it was really happening.

But not yet. Not immediately. To truly climax you need to build up tension. Starting nicely, adding some cooler stuff on top, more and more adrenaline, increasing awesomeness bit by bit, like a long but exhilarating hike to the summit. So after sailing from the rather depressing island of Cebu to the one of Bohol, I immediately crossed the bridge to the tiny islet of Panglao.
​
A total tourist trap. With reason.
Now there is certainly something to add as to how I traversed this island by means of local transport. You see, once I tried to order an Uber nothing happened. Neither did so when I requested a random hotel’s reception to order a cab ​(it was late and I had quite some luggage). There are none of the first, and less than twenty on the entire island of the second, according to local estimation. So how do people get by, you wonder?
​
By tricycle.
The Filipino answer to the tuktuk. So imagine this: You want a car but you can only afford a motorbike. But you want that car really really badly. Creativity is key here. You simply improvise a car around your motorbike. That it rattles from all sides and, even though you want and you will transport 2-4 passengers at a time, there’s only space for about 1,5 ass... well that’s secondary concern. Let’s say it’s an experience. And if it isn’t for you, well... too bad, you don’t have many other choices. Some you have: You can cram yourself into a local bus full of pickpockets or one of those minivans operating without a regular schedule... or, and you will use this option more than you’ll bargain for, jump on the backseat of another biker. With three people at the same time.

It’s The Philippines baby, all goes.
​

* We’ll get back on the transportation issue soon... it’s gonna be good, so stay tuned.
Luckily it’s cheap, as it’s also South East Asia. Baby. Which can be said about the accommodation as well. Of course, you can make it as expensive as your wallet allows you to, the local population thriving on the booming tourism industry will be more than eager to help, but you don’t have to. For about 15 euro’s a night I had a private two-bedroom apartment with shower, kitchen and balcony. Nothing fancy: The toilet seat was smaller than the actual toilet (which is really weird – and when you think about it, implies that you basically sit on top of the splatters of your male predecessor, gross!) and I had to catch at least an entire legion of cockroaches for relocation... but it was mine and it was private and it was all I needed. 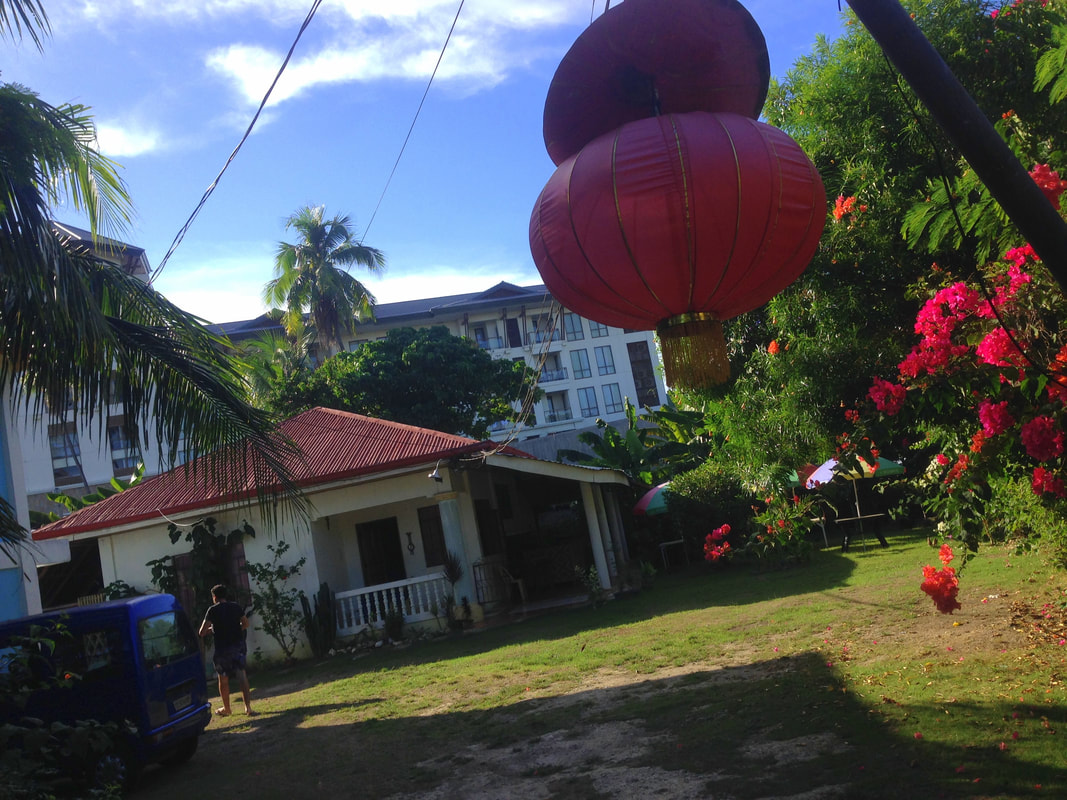 I didn’t want to stay in Alona Beach, the lion’s den. I’m fully aware that that’s where the action happens, but there are boundaries. I’m more than happy to visit the vegan (!) restaurants of this well-developed locale and finish all available cocktails at the beach bars, but I prefer not to have my bed standing right next to the pumping night clubs with screaming Europeans and Australians. No, I opted for Doljo. Close enough but far enough.
The scuba dive trips, however, do all leave from the busy white bay of Alona. And you are gonna do one, that’s beyond discussion. Why? Well, because it’s earth-shattering, mind-blowing, knee-weakening beautiful once you duck under the sea level on this patch of the globe, that’s why. Sure, you heard the news about Boracay being closed due to concerns of severe pollution, and based on my recent rather depressing experience in the adjacent northern Borneo I can only assume this was the right choice to make. Luckily, Bohol was spared from this human-induced misery. Especially the out-of-this-world dive sites around Balicasag Island, limiting its daily visitors to a maximum amount of 150 a day.
It’s a downright underwater fairytale.
​
Clown fish, lion fish, scorpion fish, blue marlins and barracudas... and man, don’t even get me started about the sea turtles. Whole families will leisurely cruise past you!
But that’s not all... did you ever hear of whale sharks?! You will, once you set foot on these grounds.

Or ehm, waters. These giant creatures of the sea come in large numbers for our lucky eyes to admire, rejoice and take in. I was out of breath once spotting one, which is not the best situation to be in when 20 meters below sea level... it’s unworldly.

* Reassuring side note: No, they don’t snack on humans. It’s more the other way around, as usual.

* Exciting side note: You’re gonna pay no more than 20 euros per dive. Yes, that cheap. Which is why I did three in one single day. Life is good. 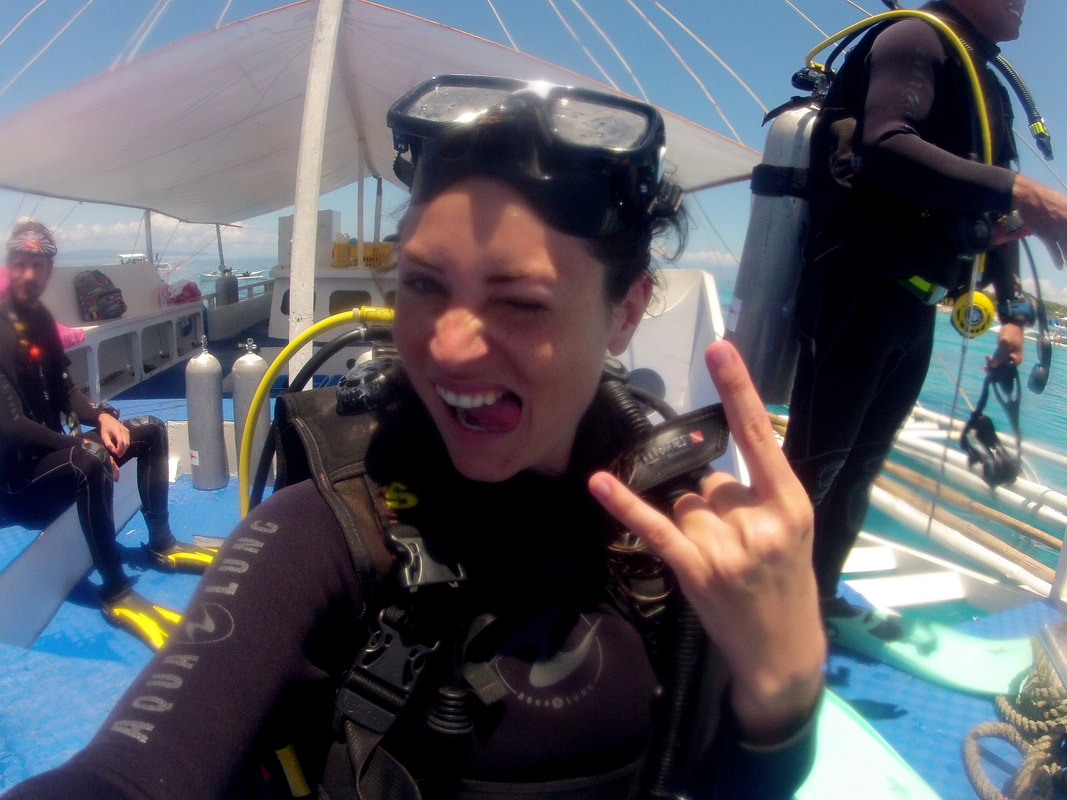 ​The #1 priority is certainly exploring Bohol’s waters... but what about some land exploration? Splendid idea! As I didn’t want to be stuck with a tricycle driver the entire day accompanied by the undeniable need to haggle for every single expenditure or detour, I decided to rent my own motorbike (200-300p in Tagbilaran / 500 in Panglao – anno 2018). Turned out this wasn’t a good idea at all. 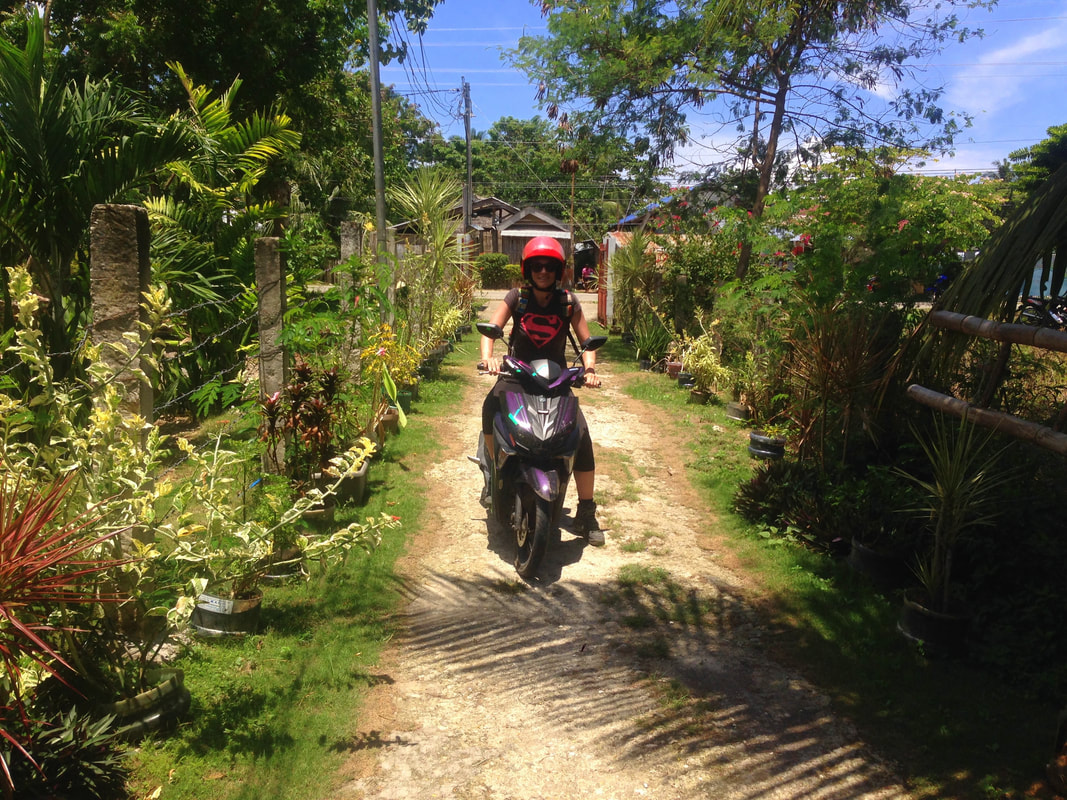 But let’s focus on the good stuff first. The upside is that you can get to the highlights very quickly. One of those is the tourist-invaded Hinagdanan Cave. A rather good-looking cave where as an extra bonus you can swim too. Insider tip: Put your swimming suit on prior to arrival... don’t even think about changing behind the rocks inside. Unless you have a creepy fascination for the decayed odors of a wide variety of body fluids and period-fresh sanitary towels. Just focus on the swimming and photographing part and you’ll be a happy camper. 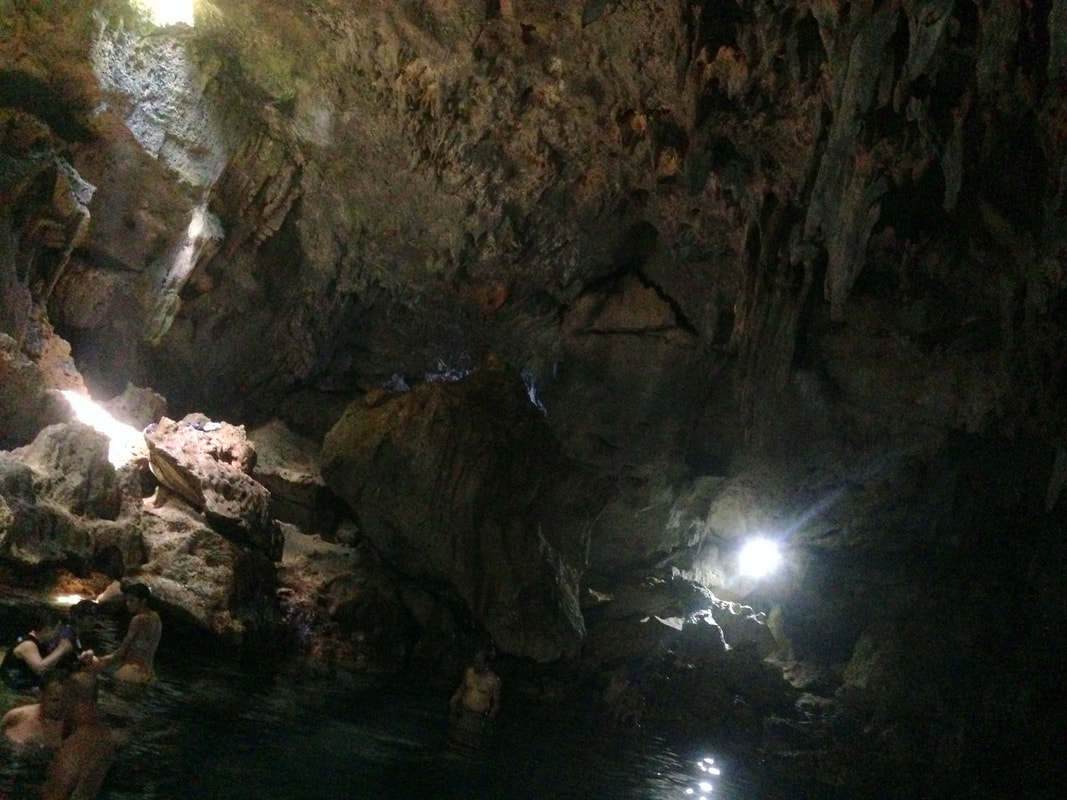 Another place where you unquestionably going to stop is the Tarsier Sanctuary in Corella. And only that one if you consider yourself an ethical being. You see, unlike the other tarsier-hang-outs where the poor little creatures are caged to function as a source of our bland entertainment, here they live in complete freedom, being able to come and go as they please. It’s a sanctuary, there are no cages, there are no walls.
​
Oh, you don’t even know what a Tarsier is, you say? Tarsiers are haplorrhine primates of the Tarsiidae family, a lone extant family within the infraorder Tarsiiformes. In human language this means tiny monkeys with giant eyes.
Yes, a lot like Gizmo.

They’re only to be found in Malaysia, Indonesia and primarily at Bohol on The Philippines. Which is why it's basically bombed as the mascot of the island.

Yeah so... you know what else I did that day? Ending up at the local police station. For hours. And the next day again. For hours.
​
I had committed the unforgivable crime to drive into the wrong street, even though there was no sign whatsoever informing me I wasn’t supposed to do so. Which mainly translates as ‘me committing the unforgivable crime if looking like a foreigner’. A white one. Female. Alone.
So not only did they confiscate my drivers’ license which they refused to give back without me rowing through their rampageous tsunami of inefficiency and corruption first, I also had to endure hours of being eye-banged by sweaty men with machine guns.

I had the motorbike paid forward for another day, but I could suppress the tendency to ever touch that thing ever again. The Philippines isn’t the country for it, I learned my lesson. More than once. Not only did over thirty people got shot dead during the time I was visiting (election time in The Philippines – viva la revolución!), every time I visited the hellhole of Tagbilaran (that’s where the ATMs, harbour and supermarkets are) I got followed by robbers who even entered the restaurant where I was trying to enjoy lunch*. And this is Bohol, don’t even get me started about Cebu and Manila.
​A lunch called ‘Kinalaw Talong’, a healthy spicy vegan curry dish accompanied by fresh non-fried spring rolls. The only typical Filipino food I actually enjoyed in the entire three weeks I stayed here.

​
For many people such experiences would be reason to leave. But I like to praise myself for being comfortable with the uncomfortable. And the latter I was. Instead, I moved to the core of the island, the forested village of Carmen where I would spend a week amidst the greenery. I had some Chocolate Hills business to attend before I could possibly allow myself to leave. 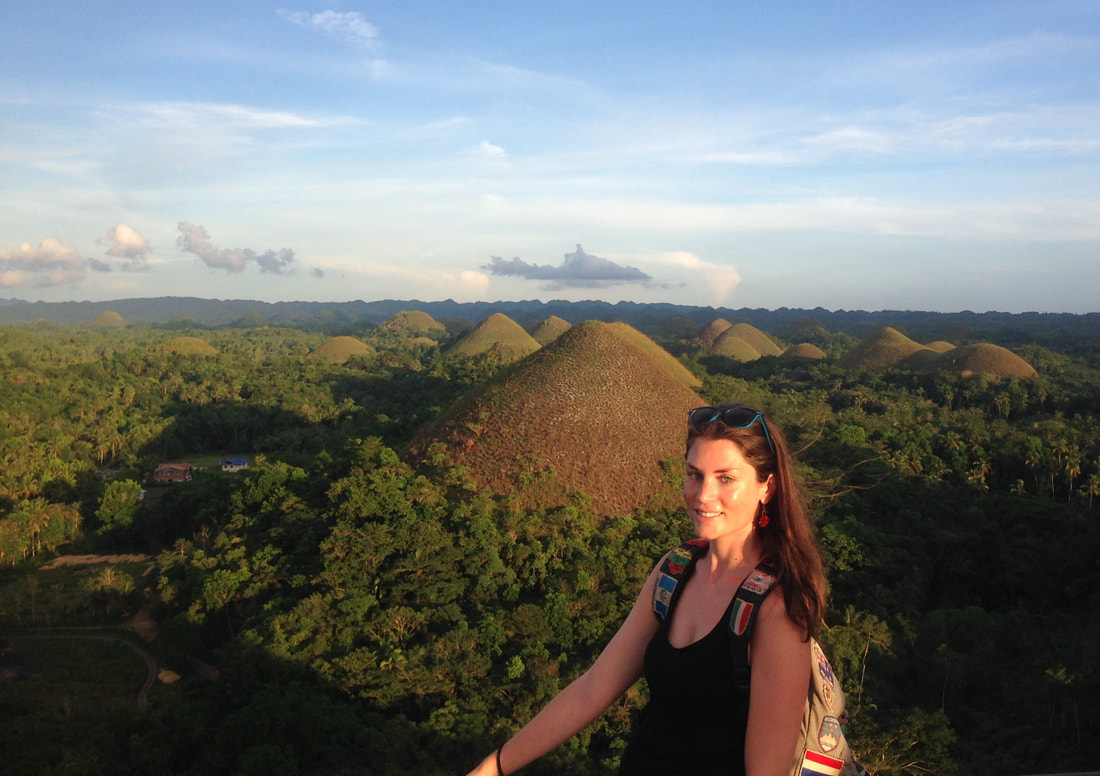 There they were. My five-year-long treasured travel ambition just became a concrete experience. Just grab life by the balls and do it, dreaming is for passivists if that serves as a medicine against plans-of-action.

I got to witness the Chocolate Hills as they are, without Photoshop.  Just how I got an honest sneak-peak into true Filipino culture. #nofilter.

I’m glad I went. But I won’t be back.
In order to support the travelers’ community, I spend many hours per week to adequately document all information and advices for prospective visitors, accompanied by a (hopefully) entertaining insight into my personal observations and experiences. This service is and will remain free. However, if you voluntarily want to make a contribution and support my travels and thus the creation of new stories and information supply, here is the button you’re looking for:
Donate
Related:
​- Not recommended, but sometimes unavoidable: Manila, The Philippines
- Make a Malaysia roundtrip: Kuala Lumpur, the Cameron Highlands, Ipoh, Taman Negara, Penang, Tioman Island, Kuching, Melaka, Miri, and Sabah!
​- Jordan, a destination on the rise: Extensive guides to Petra, Amman and Wadi Rum
- Visit the tiny sultanate of Brunei
- A rather disappointing journey through Singapore
​- Travel Asia off the grid… discover the magic of South Korea!
​​- 13 Strange Observations of South Korea
​​- A little sneak-peek into North Korea!
​​​- Pacific-island-hopping: Samoa & Fiji!
- Discover the magic of New Zealand
​- Travel South Korea: the ultimate budget guide to Jeju Island!
- Serbia at its greenest: hiking Pirot!
​- Hiking Poland's longest mountain trail (550km) with a tent: Glowny Szlak Beskidzki - check the reports here!
- Walk like a pilgrim! 6 weeks on the Camino Frances towards Santiago de Compostela / Finisterre (900km) - check the reports here!
​​- Check out Budget Bucket List's FAVORITE HIKING DESTINATIONS worldwide!