Download File
An edited version of this post can be found on STEEMIT: Upvote me to support my travels for free!
​
I didn’t hear many good stories about La Paz.

Numerous scams ripping off tourists from all their savings, pollution, corruption, drugs trafficking… Also the night bus had some bad reputation of its own, as apparently sometimes the driver takes a detour to the slums to give thieves free access. As you can imagine, I wasn’t looking forward to this 11-hour drive. No half measurements for this chick though. I brought my backpack into the bus (instead of putting it in the luggage room) and tied it to my body with scarfs. If those bastards would take their chances to steal it, they would basically have to drag me out of the bus with it. I fell asleep with my deodorant in one hand and my killer stiletto heel in the other, related to my plan to first spray the poison straight into the eyes of possible thieves and then eliminate them by slapping them in the nuts with my pumps straight after. When I think about it, it's almost a shame that nothing happened. 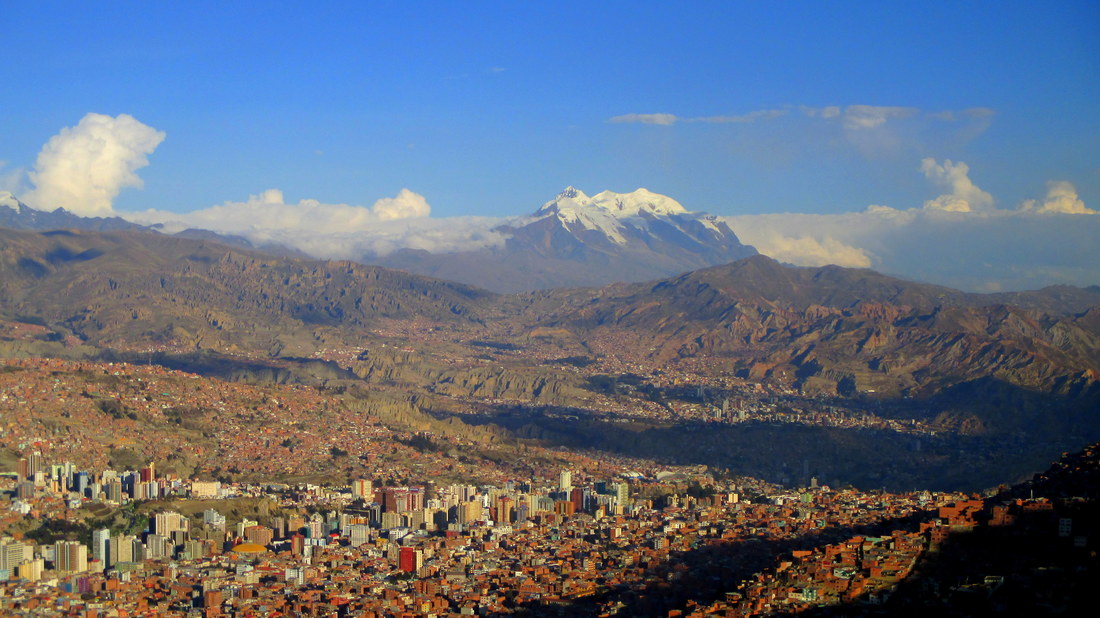 As usual, when you set your expectations that low, the only thing that awaits you is a positive surprise. So when I woke up driving in the mountains and saw La Paz lying in the valley in front of me, lit up by the early sunrise, it literally took my breath away. And I’m not only referring to the insane altitude of 4KM above sea level, squeezing all the oxygen out of my lungs. This was absolutely the most gorgeous capital I ever saw, what a location!
After I checked into a hostel I entered the dorm and witnessed 2 people having sex. I greeted them and unpacked my back while they continued. The altitude forced me into a slow morning, which I used to explore the many markets, whose tentacles expand into the entire city. Bolivia doesn’t have supermarkets, it just has markets where you can buy everything from death lama fetuses to herbs replacing viagra, and from the best fruit in the world to complete meals.
Although the Bolivian kitchen seems to be notorious for its lousy deep fry, I was positively amazed by its alternatives. Sure, they love to throw every piece of food they can find into the boiling oil and think vegetables are only suitable for rabbits or skinny Europeans, but it’s easy to find kind-of-healthy street food. Also try the salteñas, pastries delivered straight from heaven. I never paid more than a euro for a (sometimes 3-course) meal, and so far my stomach never turned against me. 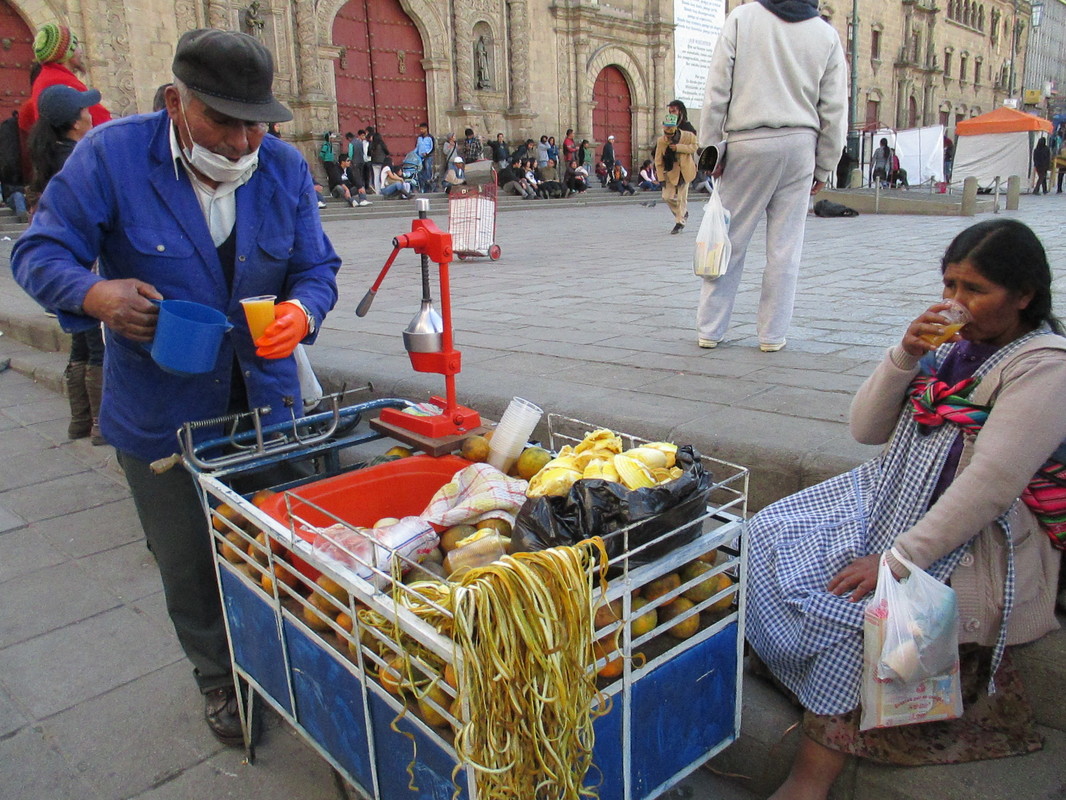 After I watched free street theatre in front of the San Francisco church and bought some instant love potion at the witch market, I hit the bars with the sex-guy of my dorm as well as two Americans and drank the night away with some terrible Bolivian wine (they do beer better).

The next day I accidentally ran into a free cultural festival. I couldn’t be more lucky, as I was about to witness a 2-hour show of beautifully dressed young Boliviano’s energetically dancing the cueca and loosen up those hips during a rhythmic well-received pop concert. ​ 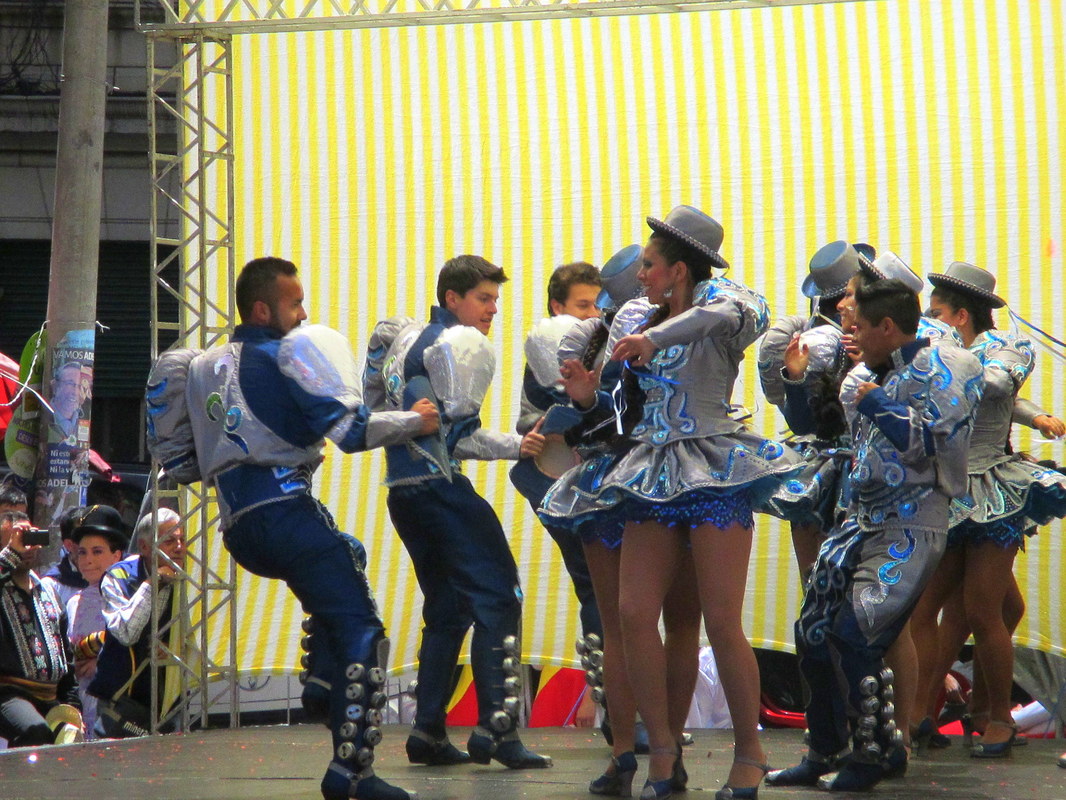 Still swinging I hurried to the San Pedro prison, where a free walking tour took off. San Pedro houses 25000 prisoners and is led by 12 guards. Yup, that doesn’t work. There are different sections, based on how much money you can afford on a cell. Where my country rewards criminals with a free cell including playstation, tv and books, Bolivia let their criminals pay rent for a place in prison. Well done. Every section has its own elected leaders who practice their own punishments, which aren’t quite subtle as you can imagine.

In between these stabbings and liquidations a society is created, as many prisoners live in jail together with their wife and children.

In between the prison walls the inmates work in restaurants, like lawyers or vendors, or the San Pedro favorite: in the cocaine business. Their wives can easily smuggle it out somewhere in their massive 20-layer skirts, and if not they just throw it over the prison walls, no one cares. I heard about some illegal tours through this prison, and as I’m mentally a bit insane I was off course already researching these possibilities. My parents can thank the free walking tour guide though, as she changed my mind with her examples of tourists getting trapped, raped and stripped of all of their belongings after which they are dropped off in Chile without a passport. Hm, maybe not.
Talking about a certain white substance (COCAINE, I am talking about COCAAAAINE), I picked up on some rumors circling around town about a coke ‘n cocktailbar catering to the travelers crowd. At an ever-changing location silver platters full of high purity lines are supposedly served with every drink.

That didn’t sound right. So I went. I gathered around some French boys and a pumped up Irish vacuum cleaner and spoke the magic words to a random cab driver…. “Route 36?” Before I knew it we drove to some run-down neighborhood and were led into an apartment complex where two men that would have even scared the shitters out of me by broad daylight brought us up. The only sound was my own bouncing heartbeat… the mess I got myself in this time, did I test my luck too much? Doors opened,  there it was: a big-pupiled bunch of nervous people hysterically giggling, attacking trenchers with endless white savannahs. I lifted my camera, which was instantly snatched away: “No photos”, a man grunted. I don’t even like drugs, but THIS was better than visiting a zoo (which is NEVER a good idea anyway, unless you hate animals).
After a solid night of sleep (yes) I tried to reach the Museo Arte Contemporaneo. In this privately owned museum the impressive paintings are actually for sale.  Then I took a collectivo to another happy destination: the central cemetery. Just like at markets, I think the true culture of a country can be found at cemeteries. And wasn’t I a lucky gal: I could witness a funeral straight away. If I die, please celebrate my funeral in Bolivia, it’s quite the show. Your corpse get dropped into a station wagon, and upon your arrival at the church your partner will run around you screaming hysterically while your friends throw flowers. All of this accompanied by an unshaved dude with a cowboy head playing guitar straight out of the heart. Don’t expect to be buried in the ground afterwards. Your body will disappear in one of the massive grave flats, high above the ground. ​ 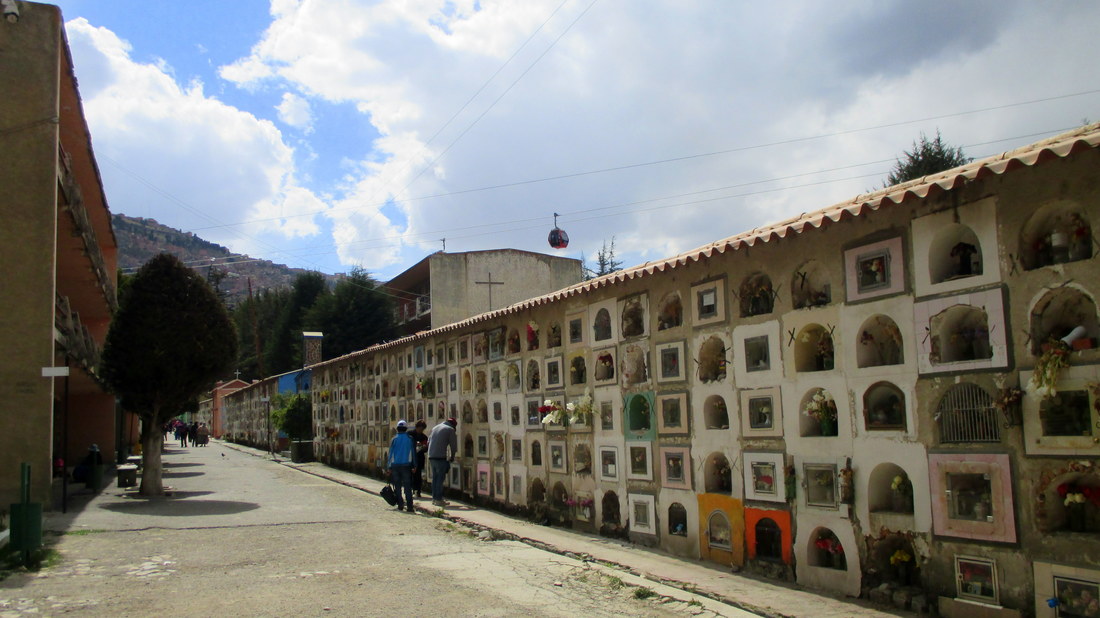 There’s simply no space left in La Paz. Oh maybe there is, high up the mountains in Altiplano, but that’s not a place where you want to be. I took the ‘ski-lift’, teleferico, up to check this poorer part of town out. I have to admit, those three boliviano’s were well worth the incredible views of this world city. I just shouldn’t have wandered around the markets up there, as I was followed by several men for hours afterwards, all of them offering me ‘protection’ (and about those guys you have to worry the most, I learned). 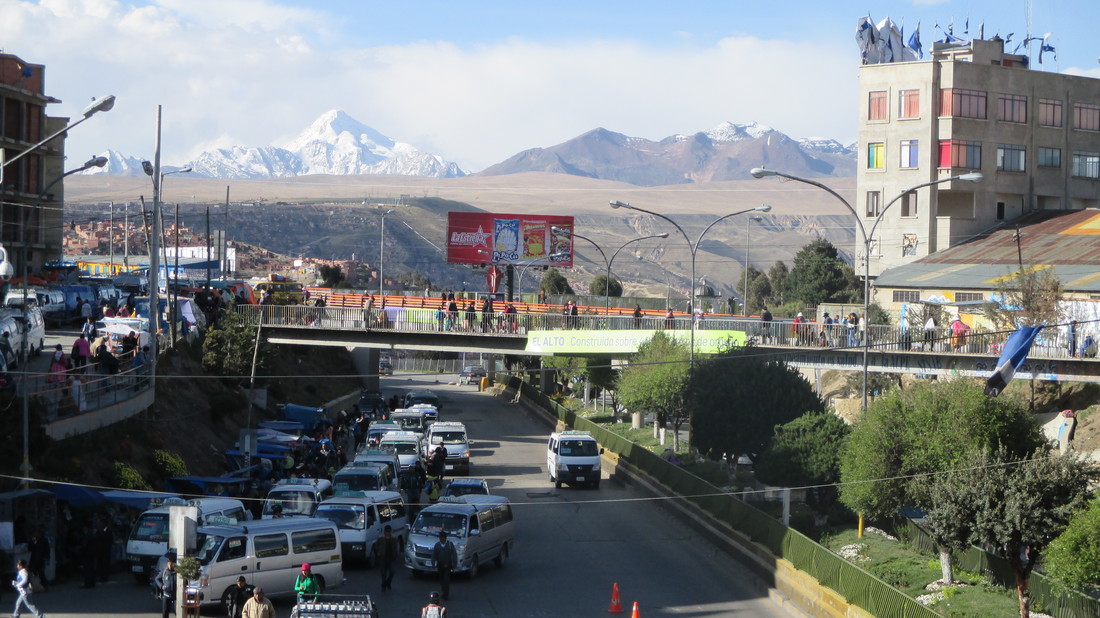 Well, after I got back to the hostel safe and sound, I found yet another way to put my life at risk: The Death Road, supposedly the most deathliest road in the world. Heavily commercialized, but well worth the views is this mountain bike tour from Cumbre to Coroico straight through waterfalls and along the steepest slopes you can imagine. ​ 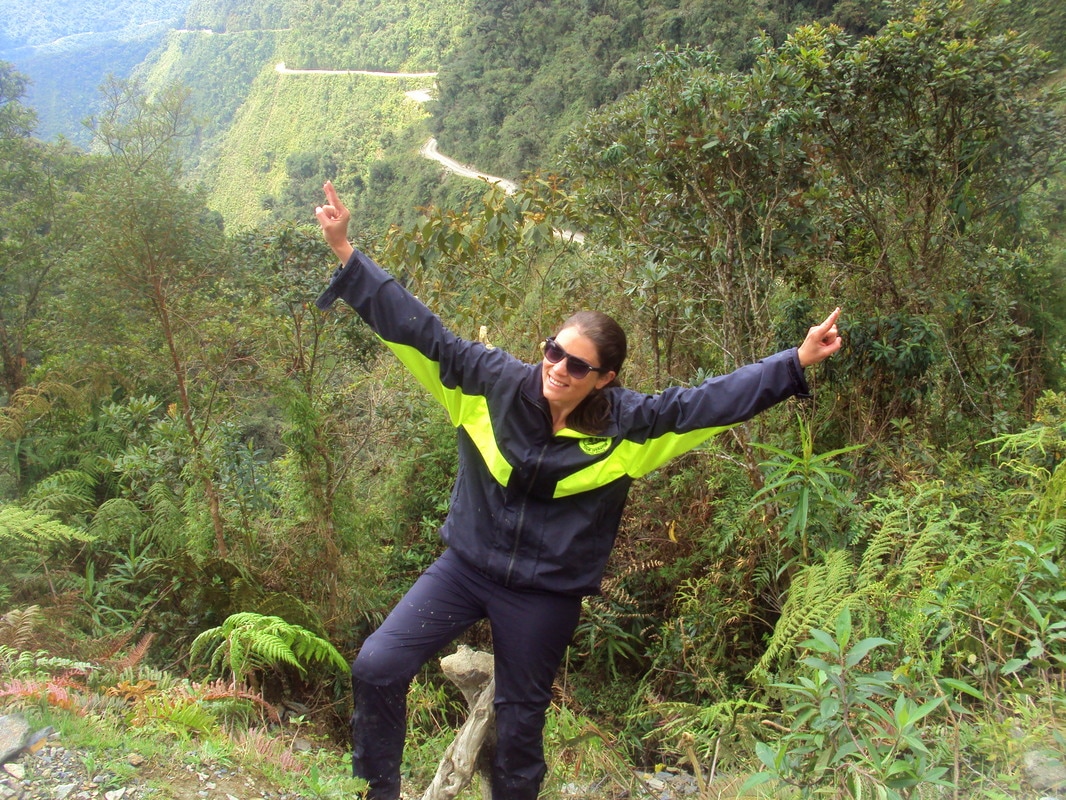 Prices vary widely, and being Dutch I off course choose the cheapest company (Chacaltaya). Please, don’t do that. I watched my poor group members, bike after bike breaking down. This couldn’t ruin the views of the Death Road though… and obviously, I had a view from quite close up, as I crashed and hugged the road flat-faced. That’s just my life, I am Stephanie and I have many accidents. So I brushed the dust off, smiled and continued until the end, where I got my very own I-survived-the-Death-Road-shirt.
I was thinking about staying in La Paz for 1 or 2 days max, but ended up staying a week. Yes, it’s that good. 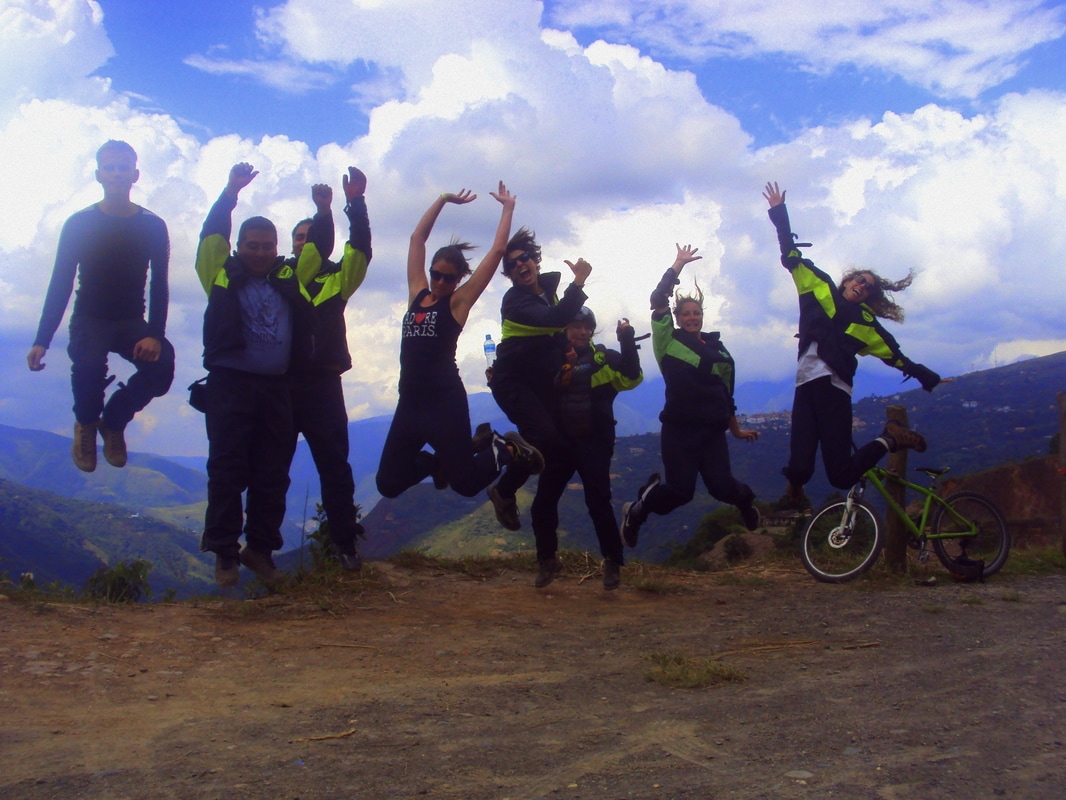 In order to support the travelers’ community, I spend many hours per week to adequately document all information and advices for prospective visitors, accompanied by a (hopefully) entertaining insight into my personal observations and experiences. This service is and will remain free. However, if you voluntarily want to make a contribution and support my travels and thus the creation of new stories and information supply, here is the button you’re looking for:
Donate
Related:
- Go to the Bolivia Page for more blogs!
- A mountain bike accident in Pisco Elqui, Chile
​​​- The 4-day Adventure Sports Jungle Trek to Machu Picchu, Peru
​- Capital cities in South America: Buenos Aires, Santiago, Lima, Quito, Asunción, Montevideo and Bogotá
​- Paragliding in the Argentinean north: San Miguel de Tucumán
- City madness in Sao Paulo, Brazil
​- Chilean greenery at its best: Isla de Chiloe
- Outdoors lover? Head down to Ecuador and don't miss Adventure Sports Capital Banos
- Modern adventures in polluted San Jose, Costa Rica
- Dangerous or incredible? San Salvador, El Salvador
- Yay or nay? Panama City...
- Nature and culture in the capital: Edinburgh, Scotland
- Hiking the Highlands: Glencoe (West Highland Way) and Isle of Skye, Scotland
- The slow charm attack of Serbia’s capital Belgrade​
- A perfect wooden cabin in the middle of absolutely nowhere: Aukštaitija National Park, Lithuania
- Hiding in the woods: the non-touristy Mols Bjerge National Park, Denmark
​- Discover Romania's enjoyable cities: Bucharest, Brasov and Cluj Napoca
- The city of cocaine: Medellín, Colombia
- Hitchhiking with a drug dealer in Paraguay
​- The adventures on the Guatemalan coke boat
​- The smoggy capital of Malaysia: Kuala Lumpur
​- Getting comfy in the Korean big smokes: Busan and Seoul