However, this is what I said on the morning of 4 October, 2015. While my own country is currently (kind of but not really) taking care of a stream of refugees coming in looking for safety, I left that homebase to check out what the (apparently) dangerous part of the world looks like. Why? Because I want to see the bright light in the dark? Because others don’t and I never felt like I’m one of them? Because I want to have a story? Because I completely lost my mind? I guess a combination of it all, but mainly because...

I feel that a real traveller should see the real world and not run away from it. 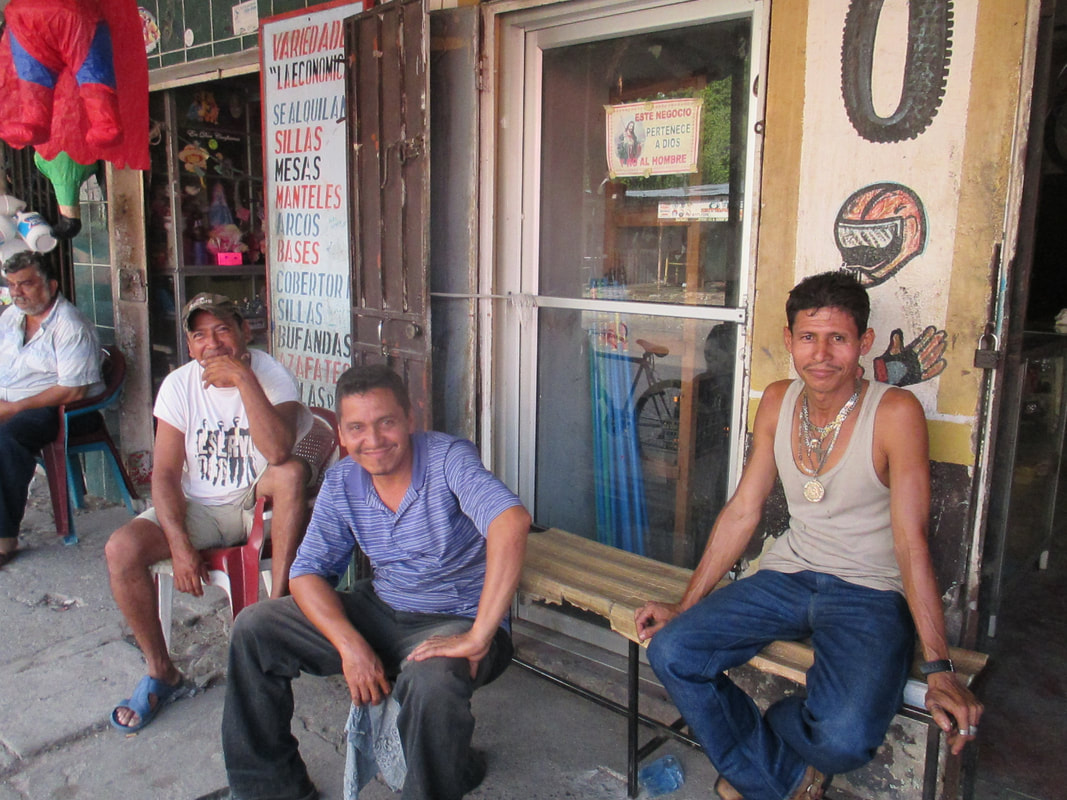 Normally I shrug the warnings away, I got used to proofing it all wrong. I was definitely going to get robbed in poor Bolivia, they said. Nope, happened in Chile, Argentina and Brazil, the three richest and most expensive countries in South America. Colombia then, my friends and family were already waiting on the call informing them I got drugged, raped and shot in the head by this population of drugs barons. Yeah, best people I ever met, never felt safer in my life.

However, I felt Honduras is a whole other level. Even though I generally do not believe in the image the media creates from a country (I mean, only negative issues reach the news: no country looks awesome if you list up all killings and rapes from the past year), I guess it would be naïve to say Honduras is a peaceful place. Just Google it ‘for fun’, and scroll through all the murders and gang violence tormenting the country. I did. I shouldn’t. But I decided to have faith in this journey and instead of avoiding the misery, use it as an opportunity to help people that might need it more than anywhere else. 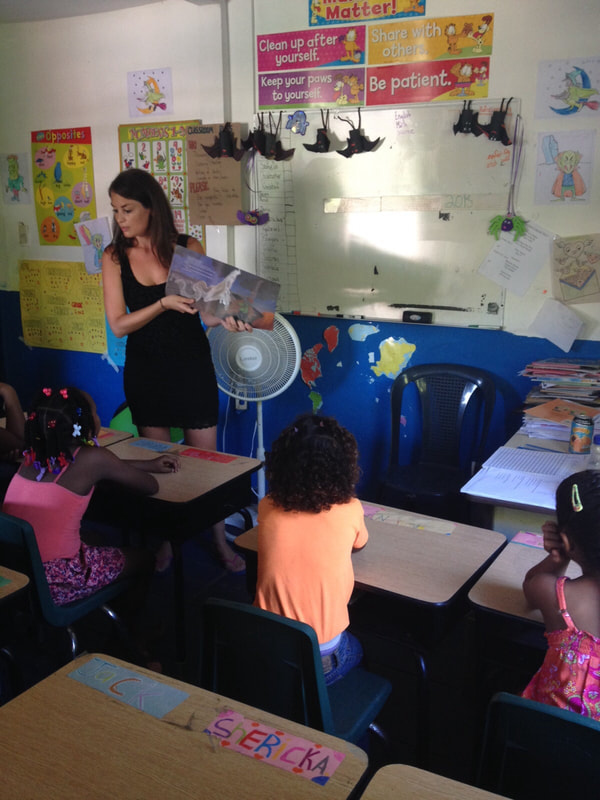 Instead of merely travelling from place to place, I soon learned that more than ever before this was going to be a journey through my mind. That sounds spiritual, but it basically means that I got confronted with my own shortcomings and irrationalities (… and recognizing them is one step towards personal growth). I experienced emotions and behaviour I don’t always have under control and that doesn’t bring  me any further. Starting with fear. Where I’m usually never scared but just alert, my doom scenarios about this country kept me up nights in a row, making me appear at the border in a state of exhaustion and eyes without confidence: the perfect victim for robberies. Luckily this fear also put some carefulness and rationality in my brain, and I prepared well for a possible theft. My entire body was an undercover Christmas tree with valuables: iPhone, left boob – iPod, right boob – credit card / bank passes / passport / USB back-up sticks, dangling under my skirt in front of my crotch… if it would be physically possible I would have anally inserted my entire laptop to protect it from the Honduran gangsters.

However, it didn’t come that far. That day we would see Honduras only leering at me from a distance. 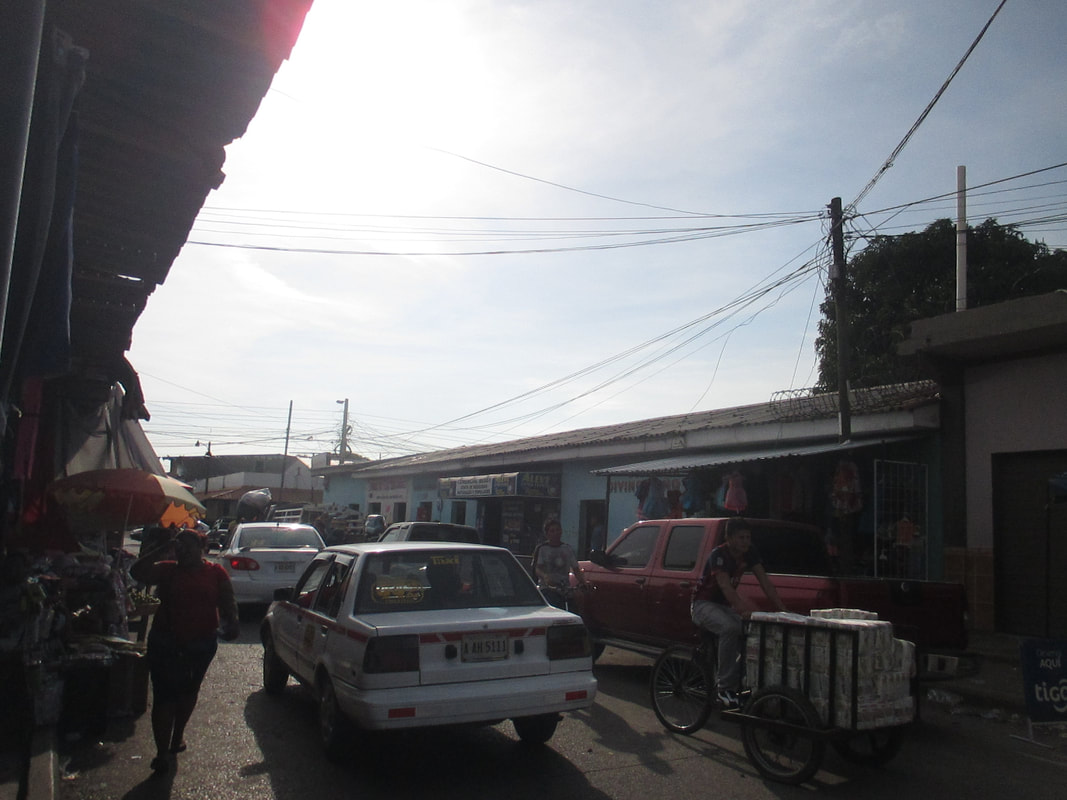 Stephanie: OCD, organized (because her head is all over the place), well-prepared, stressball. Orestes, my back-then-boyfriend: all the opposite. Result: Mr. Latino did not have his yellow fever injection and got denied access to the country… something that also almost happened at the last border because his passport nearly expired. The ‘woman’ (I could use a lot of other terms here) said he could go back to Managua, get the (hardly available) vaccine somewhere if he could find it and then wait another ten days to try again to enter Honduras.

That would have been some unwieldy misfortune in itself, but in our situation it got quite problematic. That morning we tried to get some cash-out in all three banks the border town Somoto has…  two denied our bankpasses, one was closed. We thought we could make it through the border crossing with the $25 we had left, given the fees wouldn’t be too high, people would be helpful or credit cards would be accepted. Too bad, none of this describes the reality. 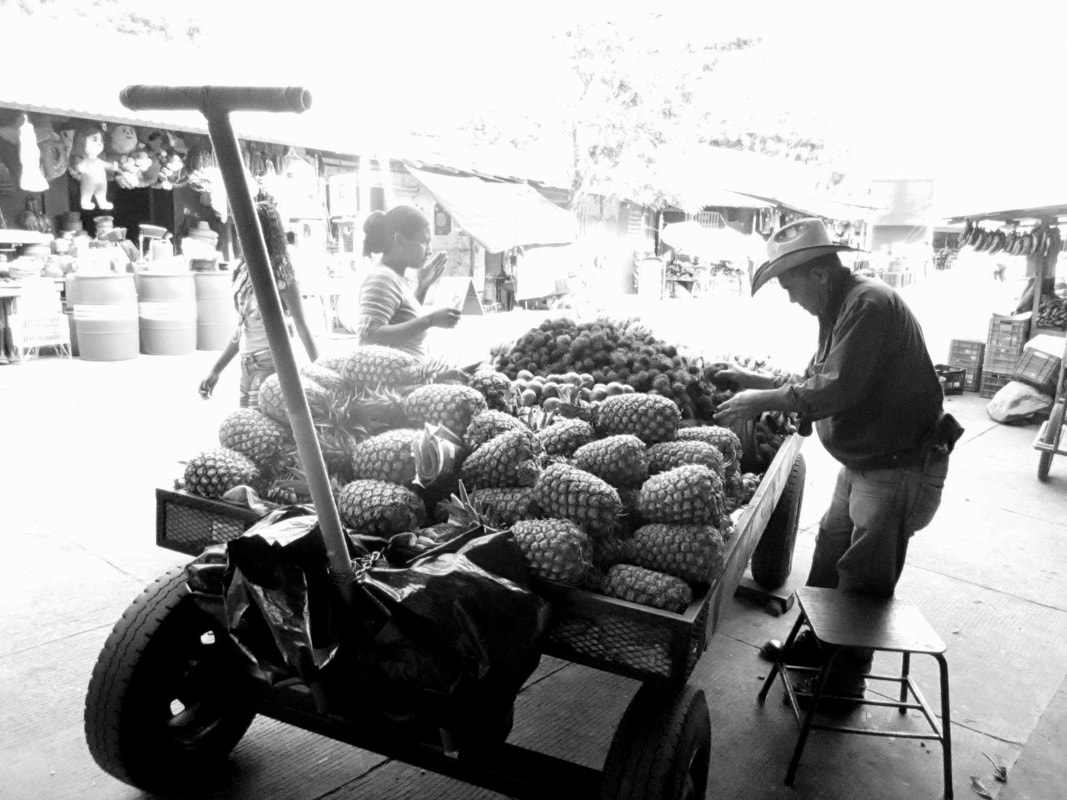 Luckily the rest of Nicaragua’s inhabitants made up for the humaneness we didn’t find at the border: Couchsurfer Juacar agreed on letting us stay another two nights. The fat lady of the local eatery agreed to give us some food on account. Nicaraguans and expats from all over the country helped us with their advice about the borders, vaccines and even offered us a bed via online Couchsurfing and Facebook platforms. All of this resulted in this plan:
​ 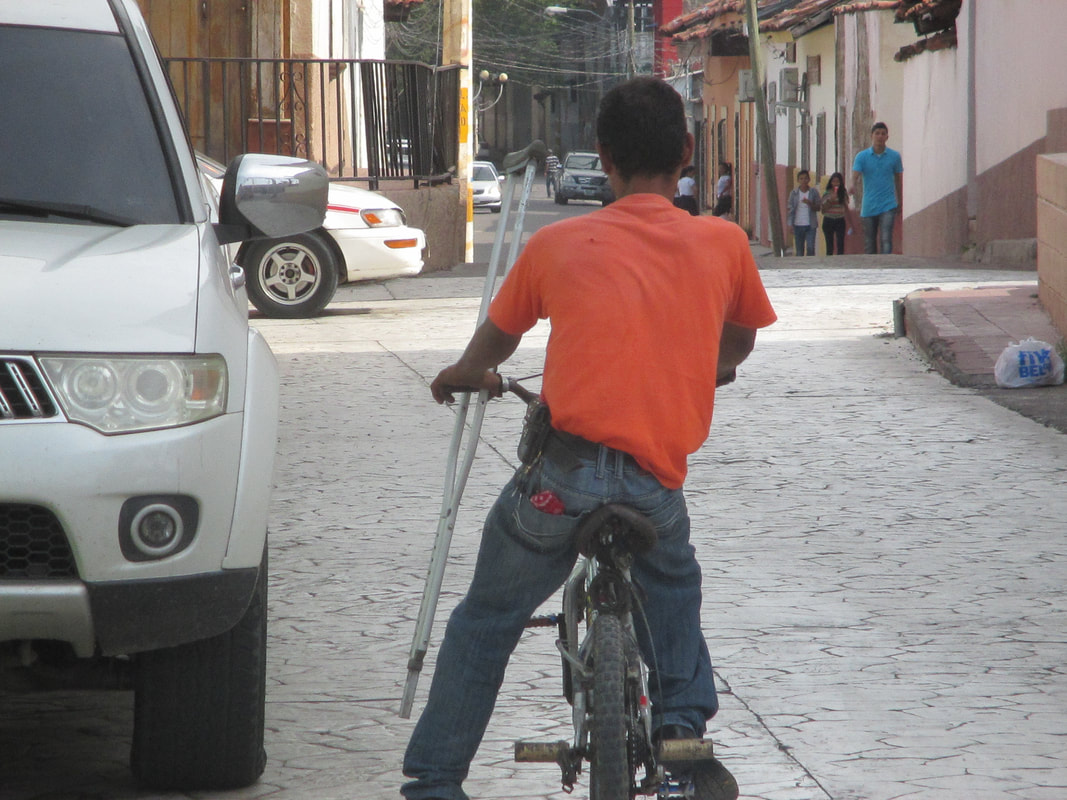 Both scenarios seemed acceptable. So… what happened? Lucky bastards as we are, Orestes came across the same ‘lovely’ lady we met two days before. She denied him access again, despite the ‘proof’ he had. Even though she was, as she described it the last time, the dutiful ‘Face of Honduras’ protecting her country… in reality she was more than ready to put a price on her people’s health: $160, a bargain. We gave $20 instead, which she accepted too. Good to know how much some people appreciate unpaid volunteers trying to help their country by teaching kids with AIDS and handing out free food. Great ‘Face of Honduras’ indeed *both thumbs up... in the ass*.

* Note: There’s a C4-agreement between Nicaragua, Honduras, Guatemala and El Salvador. It is basically invented to facilitate movement of people and goods between these countries, for locals. For tourists it means you get only a 90-days visa for all four countries (which sucks for long-term travellers and volunteers like us). You can pay for an extension in one of the capitals (in Honduras, $20/30-days), or exit one of these countries for a few days and re-enter. 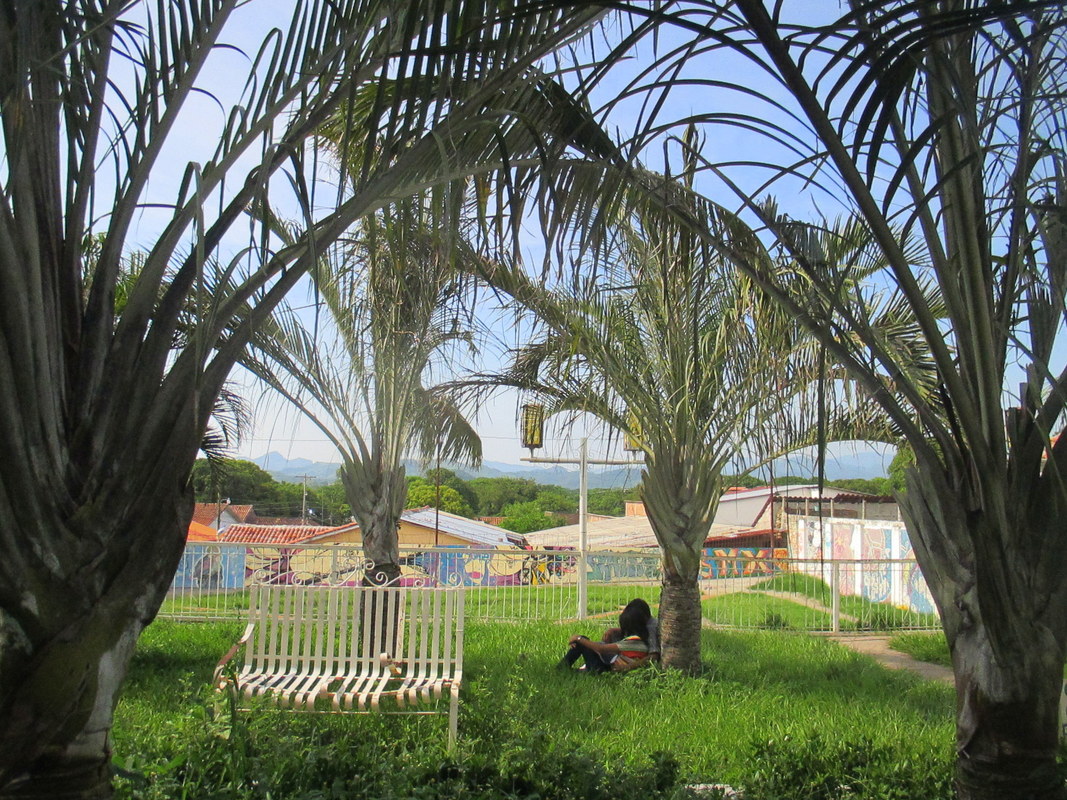 The sum of the media, my fears and this recent experience could be described as quite grim. No one was therefore more surprised to drive into the Honduran landscape and find an indefinite spectacle of beauty passing by. Even though the landscapes are comparable with those in neighboring countries, here they were greener, wider and especially emptier than anywhere else in Central America. This is how the word would have looked like without the intrusion of humankind.

I absorbed the tranquility and tried to imagine violence in a place like this. It seemed impossible. 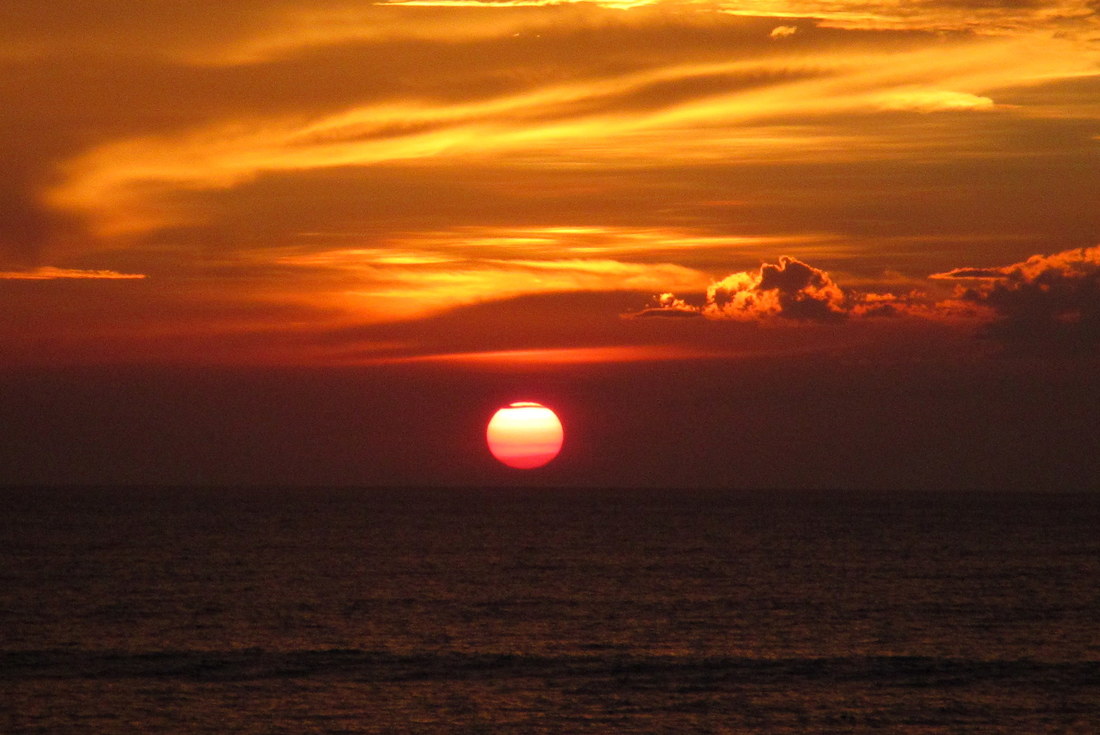 ​Once we drove into the city and stared at the KFC’s and modern parking lots, I realized that at the same time this country is way more developed than the previous country I visited, Nicaragua. So there it was, my first real impression of Honduras: Green, gorgeous, empty, kind-of-developed and hot. Very, very hot.

In Choluteca we met up with the friendly Douglas and his colleague Rafa, with whom we got in touch via Couchsurfing. He showed us our private room in his humble house. There were just four walls and a mattress, but honestly, what does one need more? While Orestes tried to explain veganism to these two astonished Hondureños living in a carnivore society, I concentrated on the music coming out of Douglas’ laptop: Rammstein and Cradle of Filth. Memories of the many concerts I visited of these bands flashed before my eyes and I found it almost unreal to hear these guitar riffs filling the room somewhere at the other side of the world, while some Latino tried to hum along with the German lyrics. Dreamlike.
I woke up with a refreshing shower. And by saying this I probably have to redefine the concept of ‘a shower’ for you: First I walked outside with a bucket and filled it up with rainwater, trying to ignore the mosquitoes breeding in there. Then I removed my clothing and wetted my body by scooping out water with a smaller cup and pouring it all over me. I put on soap and some shampoo and repeated the process. Done. Water-saving and quick.
​
But… quite a hassle if you realize I had to do the same when doing the dishes, washing my clothes and flushing a substantial #2 down the toilet (quite a project). The plan was to get the guy vaccinated (at last), but as due to some nothing-special-we-just-don’t-work-on-national-holidays the clinic was closed... so Rafa guided us through the Santa Cruz neighbourhood and San Antonio market instead.
​Even though tourism and Choluteca are not related in any sense, this is the place to go to if you want to show your family some holiday pictures. Cobble stone streets, a church and a watermelon statue. Say cheeeeese!

The next day we decided therefore to escape Choluteca and hunt down some sand and sun at Honduras’ Pacific. Douglas and Rafa promptly shut down their business, a phone repair shop, and joined us on our daytrip. 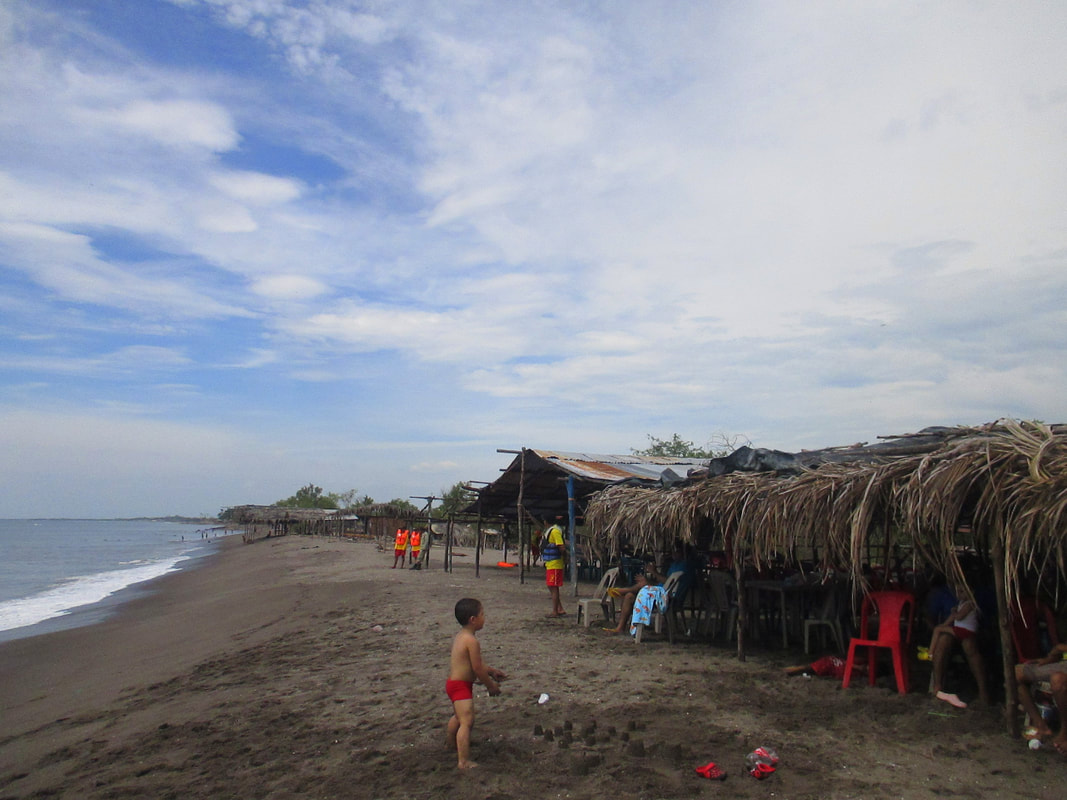 Enjoying the views on El Salvador, time after time lifted up by giant monster waves, I realized this is the Gulf of Fonseca.  A name I remember out of my geography classes in high school.

It would have remained only a name to me if I wasn’t lying right in it that afternoon. And that’s why I travel.
In order to support the travelers’ community, I spend many hours per week to adequately document all information and advices for prospective visitors, accompanied by a (hopefully) entertaining insight into my personal observations and experiences. This service is and will remain free. However, if you voluntarily want to make a contribution and support my travels and thus the creation of new stories and information supply, here is the button you’re looking for:
Donate
Related:
- Maya Ruins in Copán, Honduras
- Tranquil Couchsurfing right next to the capital: El Zamorano, Honduras
- Volunteering in a school aimed at HIV-affected children from the slums: Roatán, Honduras
- Beach bums and Garifunas: Tela, Honduras
- Just across the border: the Somoto canyon, Nicaragua
- A dangerous situation in Santa Ana, El Salvador
- The most dangerous border crossing of South America
- A border crossing from hell: Paraguay
- Corruption at the border of Colombia
​​- Severe racism at the border of Singapore
​- Free healthcare in Argentina
- Private healthcare in Brazil
- Budget Bucket List hitchhike trip to... Kosovo!